Last night, I counted out my remaining food for the next four days and realized that I needed to pay closer attention to make sure I don’t eat too much and run out on the last day. I thought I had brought enough, but my hunger has increased this leg, so I’ve just been eating without counting so far. I usually don’t have to worry about keeping track and tend to have a ton of extra food when I get to town. It’s been a combination of packing too much and finishing legs quicker than I expected. Bloodbath and Rampage have been having the same thing happen at the end of legs too. Since this leg was planned to be seven days long and we’ve been getting to town with extra food on shorter legs, I think we all cut back to avoid having a super heavy pack to carry out. Well, we all underestimated and we all noticed last night that we’d have to ration and be more careful about how much we were eating. I was okay, but Bloodbath and Rampage were pretty dire. They didn’t even eat breakfast this morning and were trying to make it to 11am before eating one bar to limit themselves. Bloodbath is usually very positive and in a good mood, but he was pretty hungry. I said that we still had many days and that they should try asking other backpackers we might see the next few days if they have extra food they want to get rid of. I joked that we might get lucky and run into someone on their last day of their trip with a ton of extra food. Right after this discussion, we saw a few people coming over the hill we were headed over. I got excited and told them this was their chance. They were not getting their hopes up. When they approached, it turned out that it was a scout troop with six scouts and four leaders. It turned out that they were headed out and they DID have a ton of extra food. It was like we hit the hiker food jackpot! Before we knew it, all the scouts were emptying their packs and tossing us bars, Mountain Houses, and trail mix. It was absolutely amazing and unbelievable! If you guys are reading this, I want to send out a big THANK YOU! 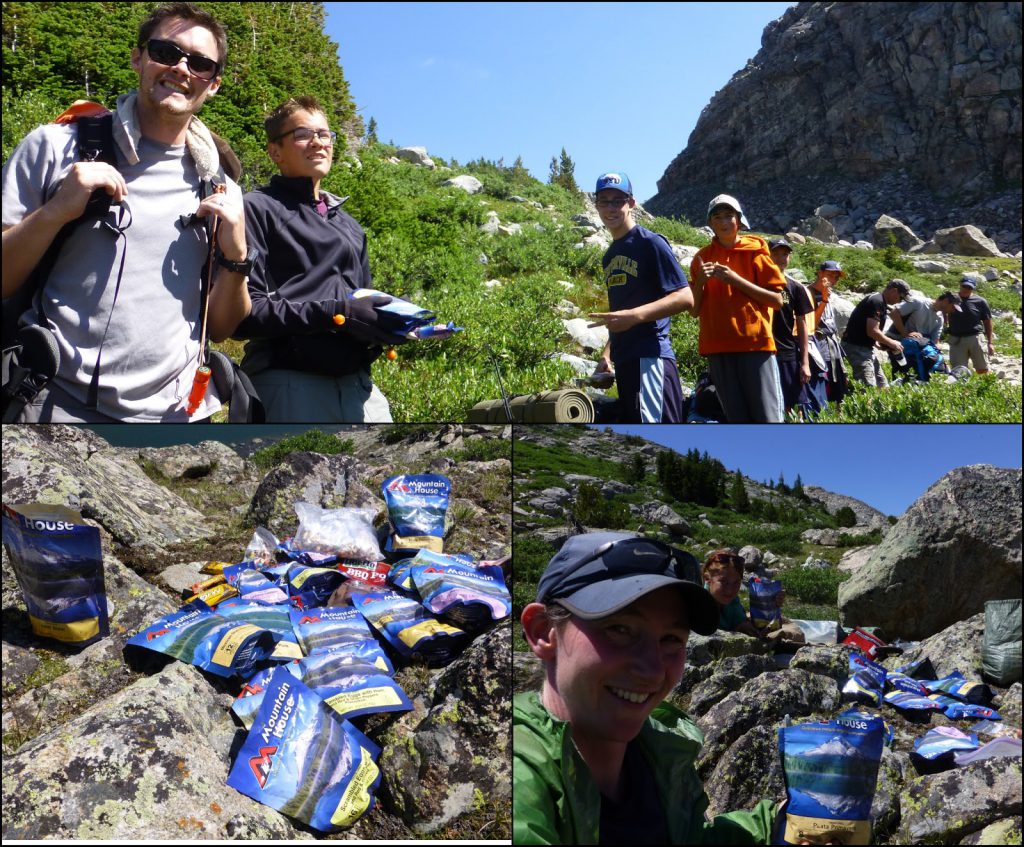 We walked away stunned and couldn’t believe the luck of it! We called it our “Sweetfish Moment” because the hiker named Sweetfish has this kind of thing happen to him almost daily. That guy has the best hiker good fortune of anyone! We were so stunned by what had happened that we walked right passed our next turn and overshot it by a quarter mile before realizing it. The look on Bloodbath’s face as it was happening was a combination of shock and pure joy. He could not only eat, but he could eat to his stomach’s content. When we had lunch, we had so many Mountain Houses, that we ate some for lunch. That’s a really special treat and it gave us a boost for the whole day. We felt recharged and had a great day of hiking on full bellies!

We had an option today to do an alternate called Titcomb Basin/Knapsack Col and decided not to do it. I’m not sure how many hikers take that route, but it looked like something way out of my and Rampage’s comfort zone. It involved going over a very time consuming boulder field and some exposed areas with steep scree…um, no thank you. Hikers I followed last year say it is some of the most spectacular hiking/scrambling they have ever done, but also used the words exhausting and terrifying in their descriptions. No death wish here and I know where my comfort zone is, so I’m sorry for those of you hoping to see that alternate. Rockin’ is 3-4 days behind me and may do that alternate as she loves that stuff, so I recommend checking her journal for it possibly.

As for today’s hiking, it was great! It started off with our one larger climb of the day over Lester Pass. Leading up to the pass, there were a lot of mosquitoes and a lot of very wet brush hanging over the trail. My shoes and pants were soaked just walking through it, but it was like getting that bath I so desperately need, so I didn’t mind. 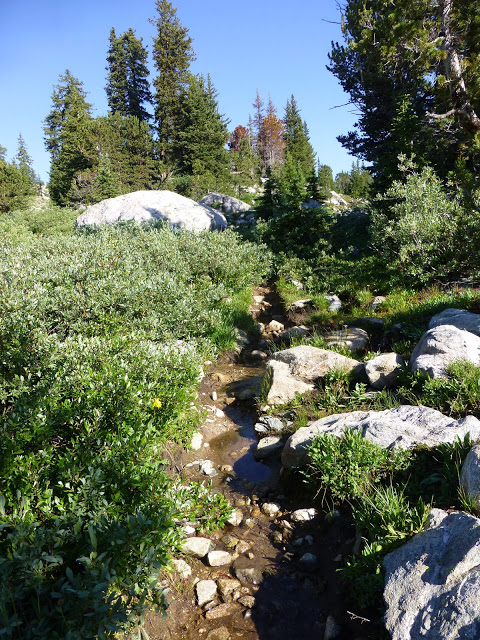 After Lester Pass, there was some short ups and downs before the trail became more of a gradual and rolling along beautiful lakes, wide streams, and impressive mountains. Again, I wish I could post more photos and will on my upcoming slideshow. 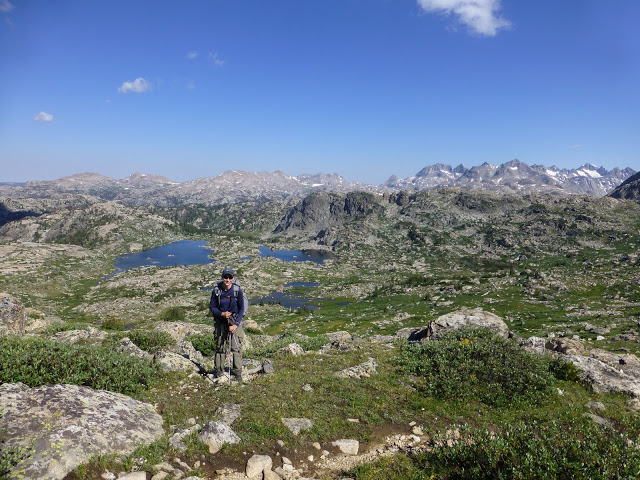 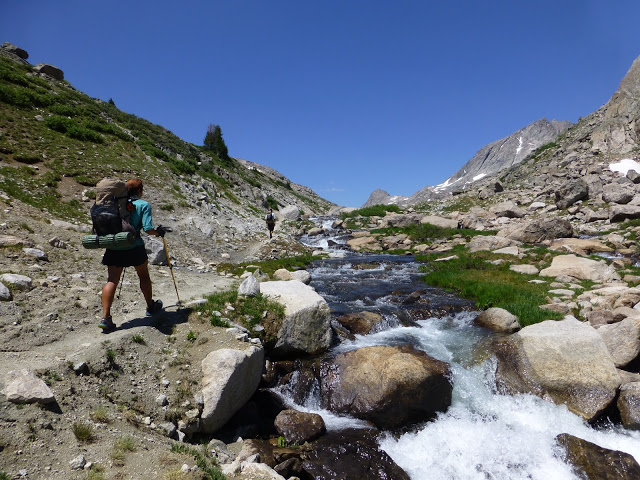 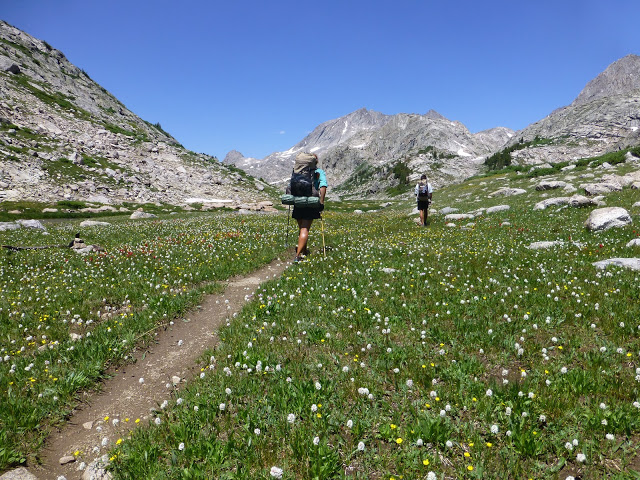 The last couple hours of the day, the trail left the lake filled picturesque terrain at high elevation and began to drop steadily into the forest. It eventually dropped all the way down to 8,000ft and followed the Green River, which is colored by glacial silt.

We found some flat spots among the forest of dead or dying trees and found ourselves swarmed by mosquitoes. 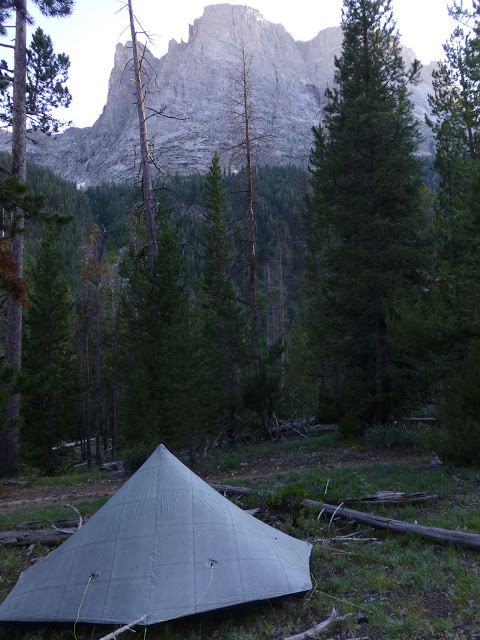 This was the first night I really used my head net. We hung our food and all had Mountain Houses for dinner. Gonna sleep well tonight!