July 26th
Yellowstone Campsite 8M2 along Moose Creek(1840.4)-Yellowstone Campsite OE1 at Summit Lake(1865.2)
Campsite Elevation: 8,557ft
24.8mi
*This day is written in two parts because a lot happened and i want to be able to load lots of pictures.
Okay, so now for the second half of this day. My brother and nephew arrived with our order of Subway sandwiches which Bloodbath, Rampage, and I were both starving for…I was both too hungry and too wound up to enjoy the sandwich as much as I would have liked, but it’s huge progress for me that I was able to eat it all since stress goes straight to my stomach and suppresses my hunger. My brother also brought us ice cold iced tea lemonade, chips, and homemade chocolate chip cookies from my sister-in-law. We were all too rushed to remember to take pictures either, argh! While I ate, my brother John took Bloodbath and Rampage to the shop to resupply…he asked me what I needed and got me the extra dinners and snacks I was short on…I later realized after all the commotion, after we hiked out, that I totally forgot about lunches for the next 5 days, so I’m going to be rationing food a bit, argh again!!
Now for the great part of the day! My brother John and nephew Brooks(10yrs old) met me at a trailhead and hiked in with me! I was so happy to be able to share this hike with family overnight! They were real troopers as it was not easy. They hiked in 7.7mi with an elevation gain of about 1,200ft and did it at a great pace in 3.5hrs to end at Summit Lake. 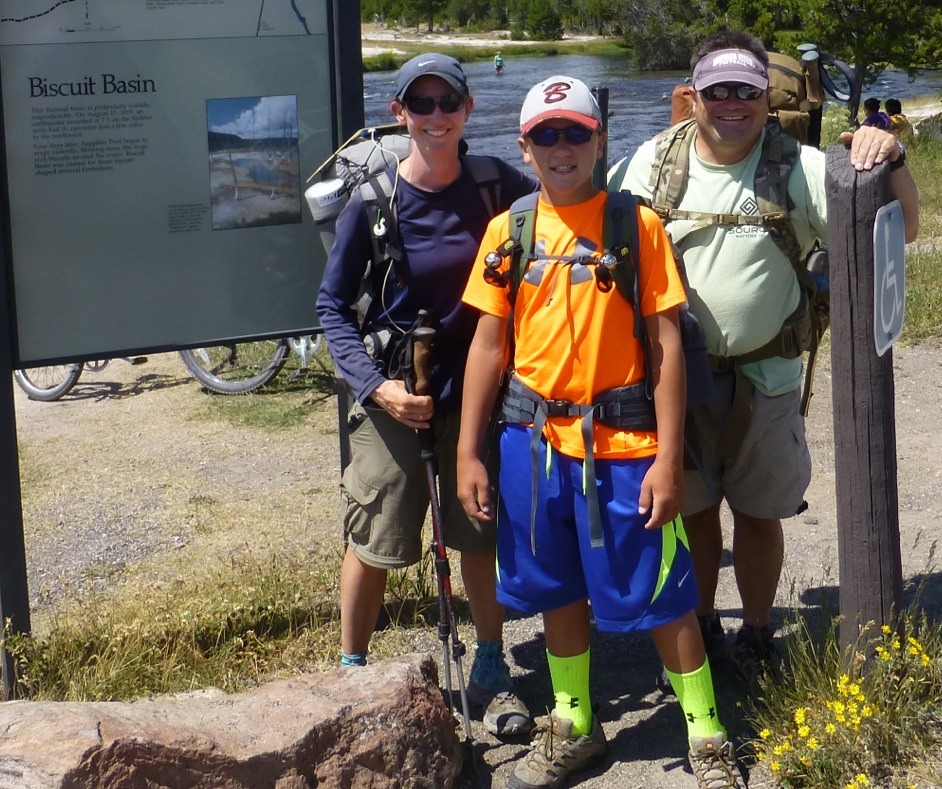 This was Brooks’ first backpacking experience and he rocked it! 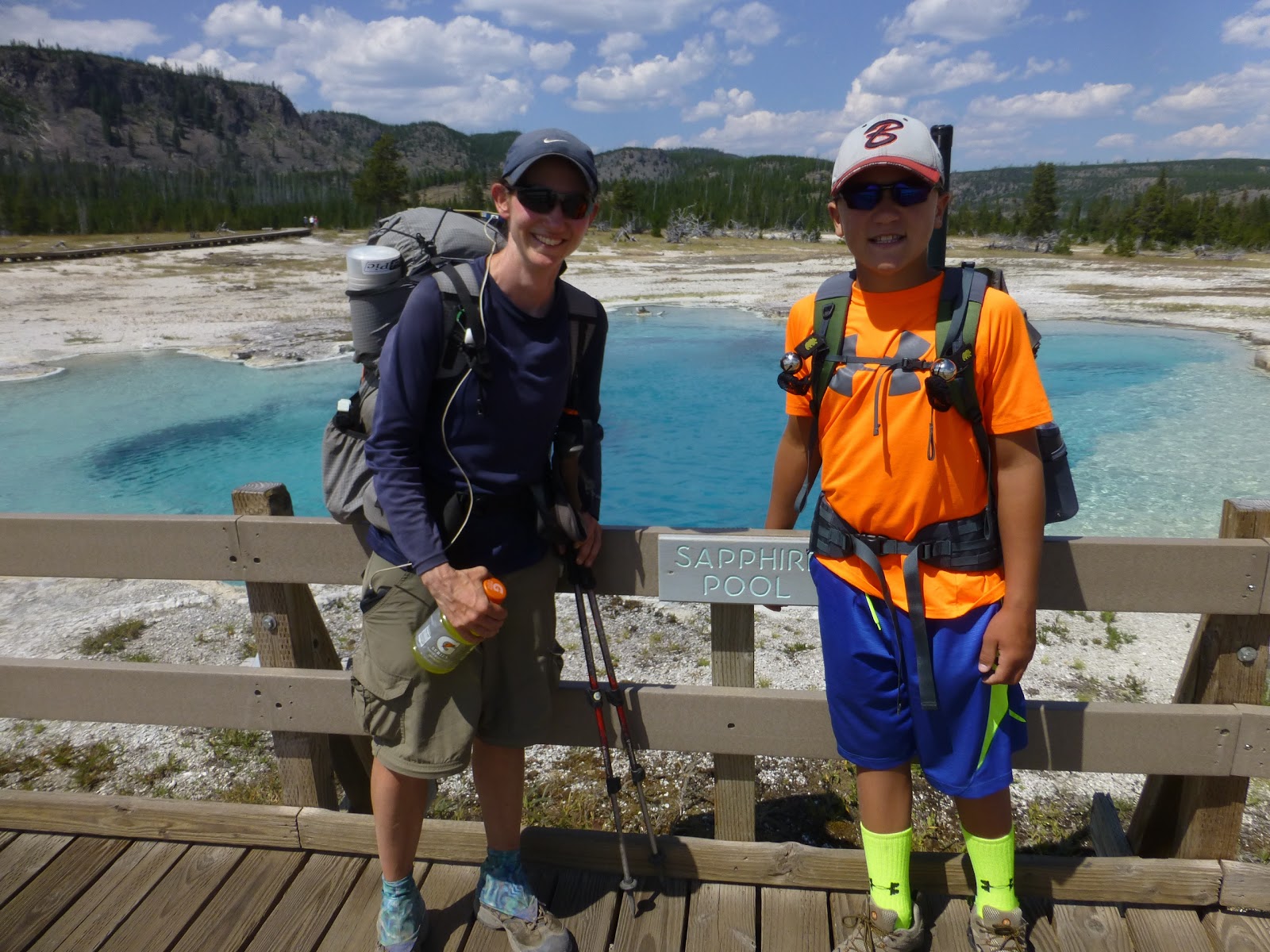 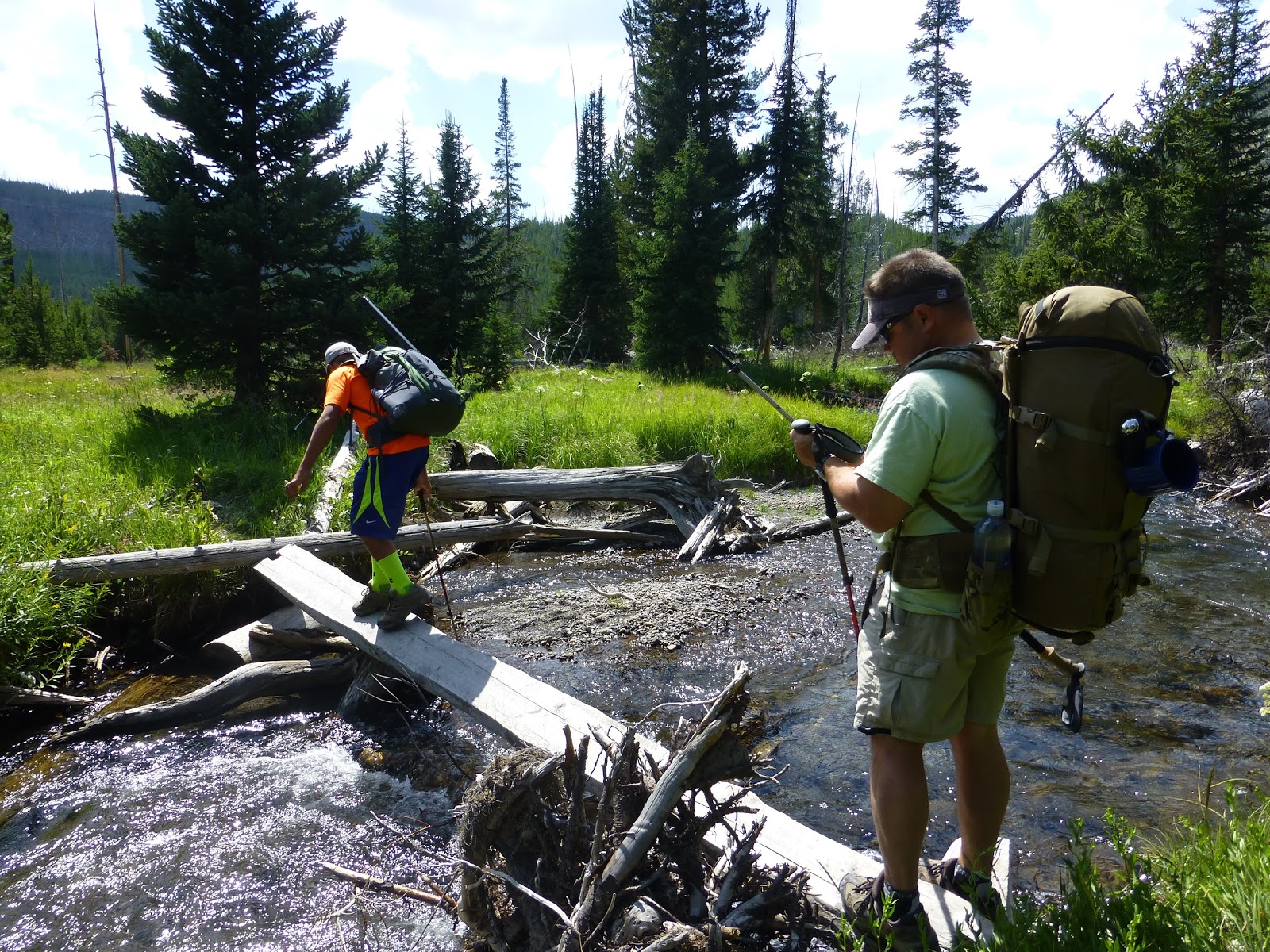 I now have a second backup camera that will take video and StickPic photos when my “good” camera is being moody, but the backup camera was affected by water on my PCT trip and can whitewash a bit…better than nothing. Check out John’s Wired pose! 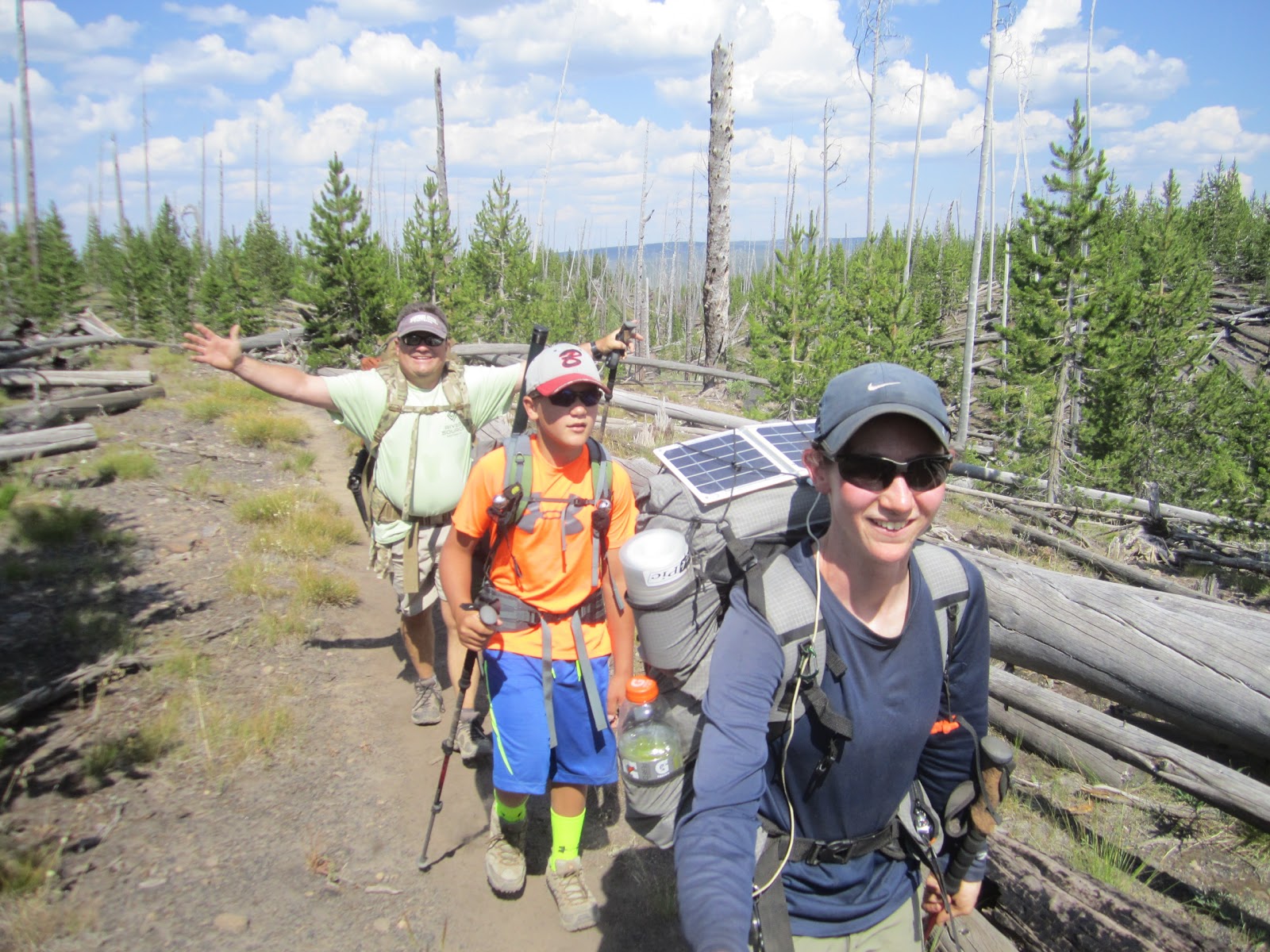 We camped at Summit Lake at 8,557ft (pretty high!) with Bloodbath and Rampage. We got there by 6:15pm, which is still early for us these days. Us thru hikers who hadn’t showered in 4 days, and won’t shower for another 6 days, got in the lake to clean off. That felt really good. We all ate dinner together and took some pictures…including a Wired pose in front of the lake! Again, the “good” camera wasn’t working, so we used the iPhone for some of the evening pictures. 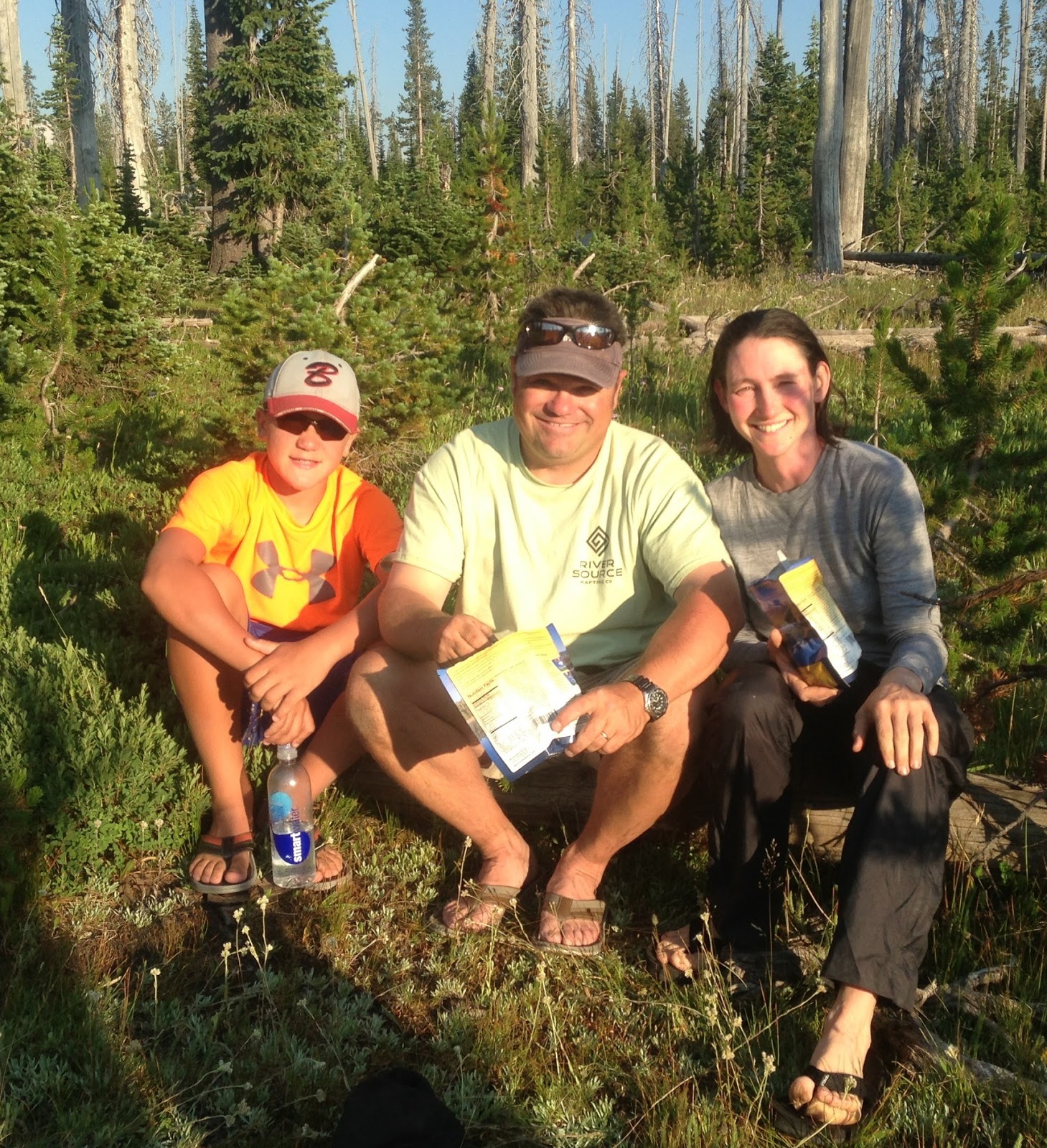 Brooks got to help with hanging the food. He’s quite the baseball star and his arm was helpful in getting the rope up over post. 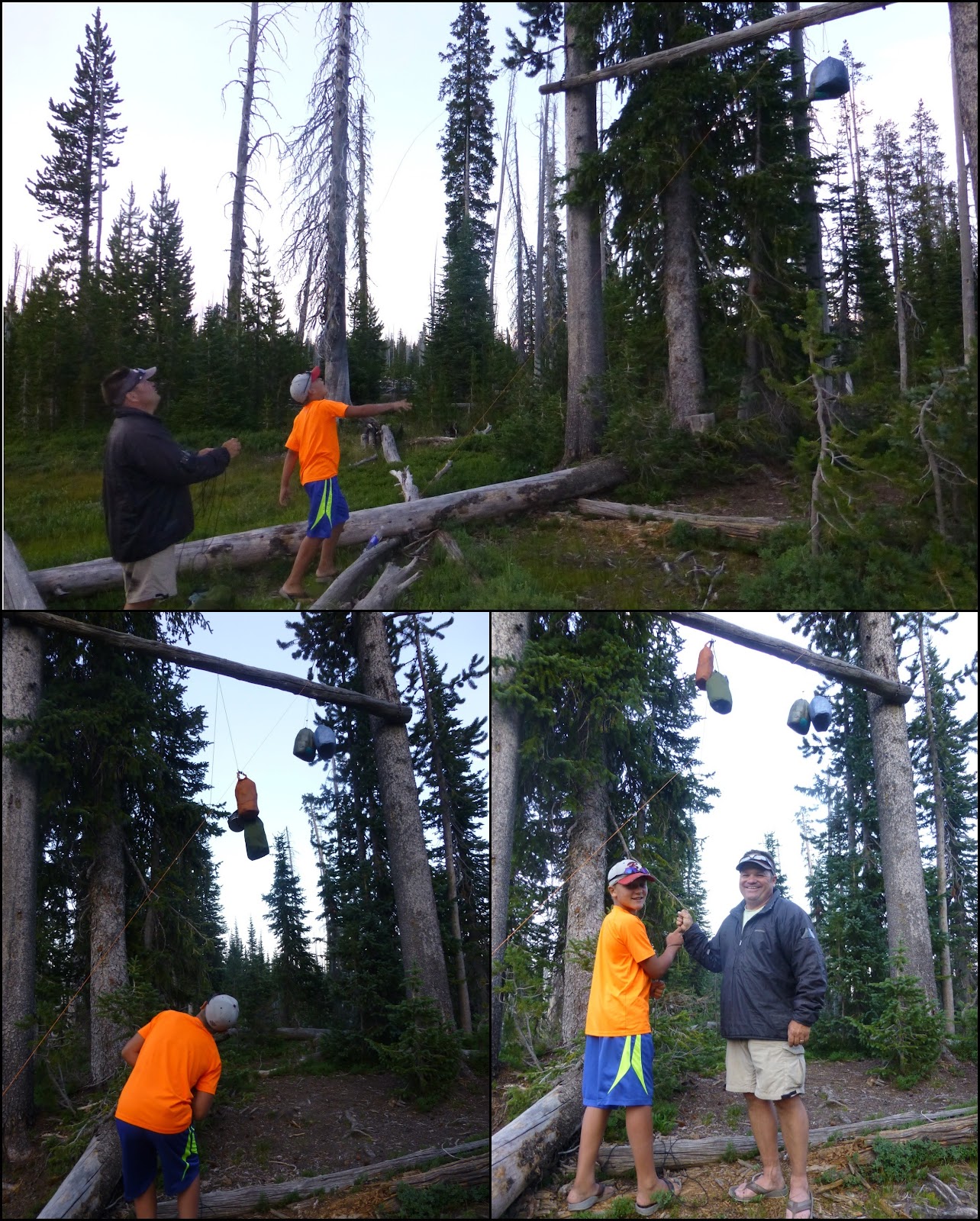 I am not sure that this trip has inspired a future thru hiker as Brooks did comment, “I can’t believe you guys do this for FUN everyday!?” at dinner tonight. It was still great to spend time with John and Brooks as the last time I saw them in person was a few years ago. We hope to do more short overlaps like this throughout the state since they live in Bozeman, so I’m looking forward to that.
It is now quite late as I got a late start on blogging and did a double entry to get all the pictures in. We have a long 150mi ahead for this next leg and are going to try to average 30mi/day if we have the energy…