Aug 3rd
Deadman Lake(2052.4)-6mi N of Morrison Lake(2085.7)
Campsite Elevation: 9,255ft
33.3mi
Today I spent most of the day hiking with Bloodbath, Rampage, Aquaman, and Sweet As. Cherry Picker and Dain slept in and started later, so we knew we’d see them in town tomorrow. The four of us got started at 6:30am. The group was hoping to do 35mi, which would set us up for a half day into town tomorrow. My motivation was not to make 35mi, but just to hike til 7:30pm. We’ve been going later than that a lot lately and it’s difficult for me to stay awake to blog when I get to camp after 7:30pm. I knew they would probably want to hike later than that and that they also hike hills faster than I do. I told them in the morning that I might not keep up and that I’d just see them in town tomorrow if they got ahead of me. We started off with a chilly morning in the upper 30s that soon warmed to the 60s and 70s the rest of the day. Here is the view looking down on Deadman Lake(where we camped) as we headed up switchbacks this morning. In that meadow , we saw a large male moose this morning too. Bummer my camera wouldn’t zoom, so I couldn’t get a good picture of it.

The hiking today was not very exciting. Much of the day was high on the divide, but the terrain was much easier than the rest of the leg when we were up high. The ground was less lumpy and there was a lot less high brush to walk through. There was some trail and some of just hiking from one cairn or CDT sign post to the next.

To my surprise, I was able to keep up with the group with little pushing. Halfway through the day, the trail became more of a road and that made hiking a bit easier. 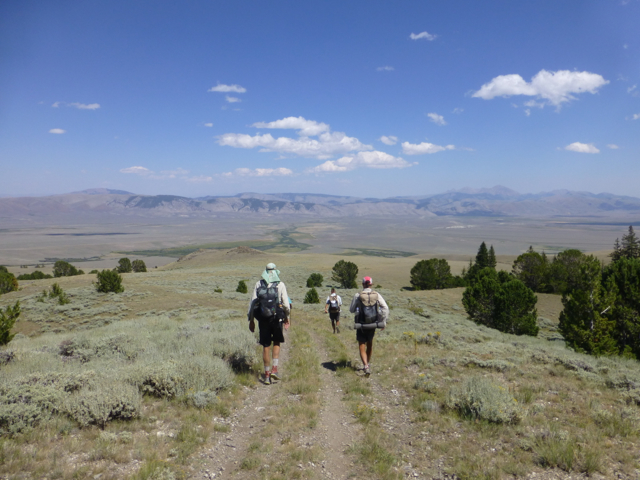 As the day wore on, I started to get antsy about hiking solo. That happens for me when the group size grows or if there is a lot of talking. I just started to get more and more annoyed by hearing voices and seeing people. I hung back or hiked ahead most of the day and used my headphones periodically. There was a point where the group took what is called a “Ley Alternate” and it saved us 2.5mi. I’ve been pretty careful not to take alternates just for the sake of cutting miles because I kinda feel like that is cheating…I’ve done small ones that cut off a mile or so, but this one is my biggest one and I kinda felt bad about it. It is the route 90% of the hikers will probably take and that is what makes this trail unique. There is an “official” route technically, but the alternates are considered to also be official by most hikers. It’s a slippery slope and I feel like I’ve been brought over to the dark side, by cutting miles and I know it’s small. These alternates tend to be a decision made at the moment and this one made sense to take. I just felt the need to confess even though most hikers wouldn’t think twice about it. I’m still getting comfortable with the idea…
On another note, my hunger has been crazy lately. Fortunately, I’ve been packing more food, so I’ve just been eating a ton. It has really increased over the last couple of weeks and I’ve never been able to eat so much in my life. It’s like I’m a bottomless pit. I eat and 20mins later, I’m really hungry again. This hunger thing is new for me as I am not normally a big eater as stress tends to go to my stomach. I’m pretty proud of all my eating as it’s something I worked on mentally between hikes. It’s great because it also means I’m not stressed. I feel good in every aspect and that is great for this late in the hike. I hope to keep it that way too. Bring on the food!
Around 5pm, we came to a lake and the group wanted to take a swim. I knew we still had many miles left and that we were headed back up to the Divide where there would be more ups and downs and possibly colder air, so I chose to keep hiking. It was a lot of up and down, but it was thankfully along a road rather than cross country on lumpy brushy ground. The elevation changes were only a couple hundred feet or so on each hill, but some were pretty steep.

I really enjoyed the time to myself and have missed that these last few weeks. It was nice to just hike my pace and stop when I felt like it. I found a great sheltered spot on the Divide in some trees and camped at my ideal 7:30pm time. The road seems to be just along the border of Idaho and Montana, so I’m technically sleeping in Montana. The group came by at 8:30pm and side they were going to hike a bit further and I’ll either see them in the morning or in town. I’m glad I stopped where I did and it’s really nice to be in a quiet place on my own. The sunset was nice tonight too.

About 25mins after the group, Dain came by and said he was considering hiking into the night. We talked a bit and he hiked on. The others know I prefer to camp early to blog each night and it’s just the way it is. We all have what works best for us and I am thinking of doing more solo next leg if the group wants to keep doing such long days. I can do them, but it just isn’t necessary or fun for me. We’ll see. It might be nice to do some solo stuff next leg just to change things up.