Aug 6th
2mi after Wagonbox Spring(2126.5)-Pioneer Creek(2,164.6)
Campsite Elevation: 7,285ft
38.1mi
I got to hiking by 6:20am this morning and was surprised by how much downhill there still was. It was great! Yesterday, the end of the day had quite a lot of downhill, so I expected today to go back up, but it didn’t the first couple hours of the day. It was more on the wide dirt road and I was able to cruise as downhill is where I can make good time as it doesn’t bother my knees as much as many other hikers. The sunrise was nice too. 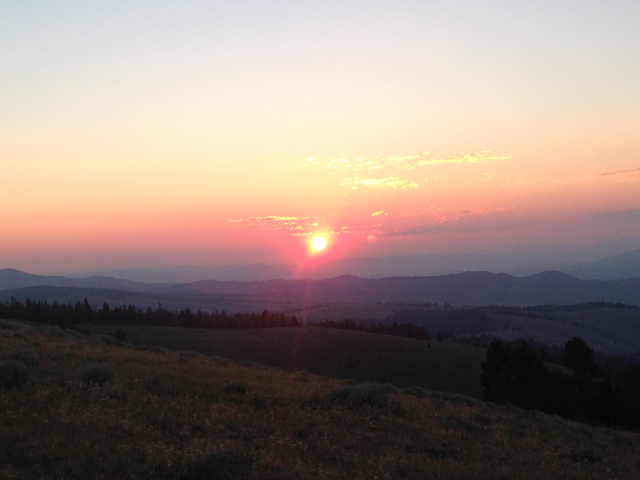 About 1.5mi after I started, there was a note from Bloodbath and Rampage saying they had camped there and when they started this morning. They were not far from me. About 5mi into the day came our first off trail water in a long section in which there was no on trail water. This first source was at Lemhi Pass, which is a National Historic Landmark. It is the location where Lewis & Clark intersected with the Continental Divide. One of their explorations was to travel up the Missouri River to find it’s headwaters and that was the Continental Divide. Apparently, there are other stories associated with the pass too. There were pamphlets, many informational signs, and an engraved stone. 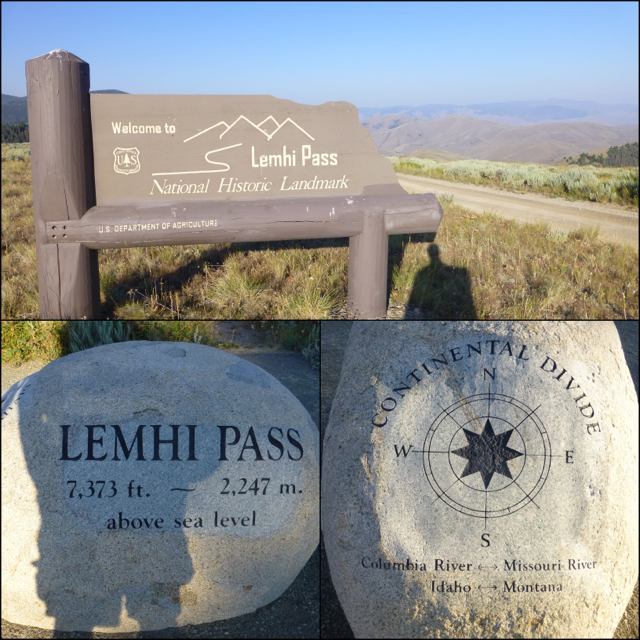 There were two maintenance workers at the trailhead nearby and I asked the if they had a liter of water they could give me so I wouldn’t have to make a .6mi round trip down to a spring off trail. I got lucky and they gave me the water I needed to make it another 12mi to another off trail water source. I didn’t realize it until I climbed the trail back up to the Divide, but I had apparently passed Bloodbath and Rampage while they were down at the spring getting water. When they caught up to me, they said that Optimist and Stopwatch had camped with them last night and were just a bit behind us. All of them had a goal of at least 35mi today and I said I’d just hike til 7:30 or 8pm and see how far that got me.
I ended up hiking with Bloodbath and Rampage most of the day. The trail was actual new trail most of the day and was completed last year. It was some of the best trail all hike and it felt like I was on the PCT with how I was able to cruise. 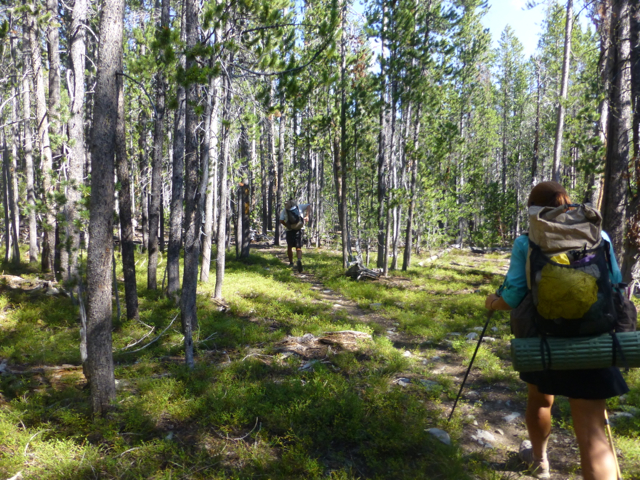 Rampage and I started a new audiobook from my friend Andrea called Gold by Chris Cleave. A good novel so far about two women Olympic cyclists. After lunch, we hit the next off trail water source. All of us each had just a few sips of water left. After hiking downhill through some brush for at least 1/3 of a mile, we found that the source was DRY! All five of us were counting on that water, so we left a note for Optimist and Stopwatch and all the remaining northbounders not to bother hiking down there. Problem was that we didn’t have that luxury of anyone ahead warning us. We are some of the first hikers through as northbounders this year, so water and trail info has not been shared. We were disappointed that southbounders hadn’t warned us and we realized that we are the Guinea Pigs for the remaining sections as we are the only ones up here so far. There are two speedy guys(Mtn Rat and Ross) well ahead and then us five. Others who had been ahead had given section reports and helpful advice on trail notes and on our 2013 CDT Class Facebook page. I’ve taken over that duty as I am grateful to others who did it for the group the entire rest of the trail. Stopwatch mentioned that it isn’t fun being the Guinea Pigs, so I totally had to use it as this blog title. As for the water, we ended up seeing an alternate with water along it and we were able to hike 5 more miles off a couple gulps of water and go off trail about 1/3mi off trail down steeply on some rocky scree. It was tiring, time consuming, and annoying, but the waster was cold and great!
Bloodbath and Rampage decided to push the rest of the day and I said I might make it to camp with them. Stopwatch and Optimist had passd while we were getting water and I walked up on them as they were finishing a break. We hiked together for an hour or so and then they stopped for water while I chose to keep hiking. The trail was awesome as it was wooded, soft dirt, and had a gradual downhill grade. 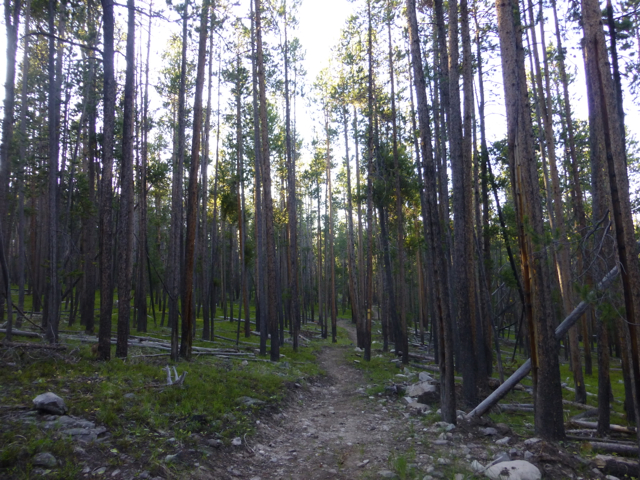 I was able to cruise and even jog much of it. I figured wherever I landed at 8pm, I’d camp. I ended up catching up to Bloodbath and Rampage and ended up walking til 8:10pm to the stream they had chosen to camp at. I figured I could do 10 extra minutes as it’s safer camping with a group tonight after we saw bear scat towards the end of the day. Stopwatch and Optimist showed up around 9pm and we are all camped together. I keep forgetting to get camp photos with these longer days.
I didn’t pay attention to mileage today and it turned out to be my personal record for most miles in a day! 38.1mi! And that doesn’t even include the two side trails I did to the water sources. I wasn’t intending to push this leg, but these two couples are very motivating. They all want to get to town a night earlier than we originally planned rather than the following morning. It will save us a day and get us in and out of the next town if Darby quick. The town after that is Butte where Bloodbath, Rampage, and I plan to take a zero and we are excited to get there that much sooner. Okay, it’s late and I’m going to bed!