Aug 17th
3mi before Nez Perce Creek(2414.5)-.4mi N of Champion Pass(2445.7)
Campsite Elevation: 6,972ft
31.2mi
I was on trail hiking by 6:45am this morning. Bloodbath and Rampage were still asleep when I left. They have shorter days planned for this leg and are taking it easy. The hiking today (and this whole leg) was pretty relaxed. Mostly level to gradual rolling with nice wooded trail. The morning started off with a road walk for about 5mi and I was quite happy because I had speedy Internet service and sunlight to keep my phone charging while I used it. Perfect! 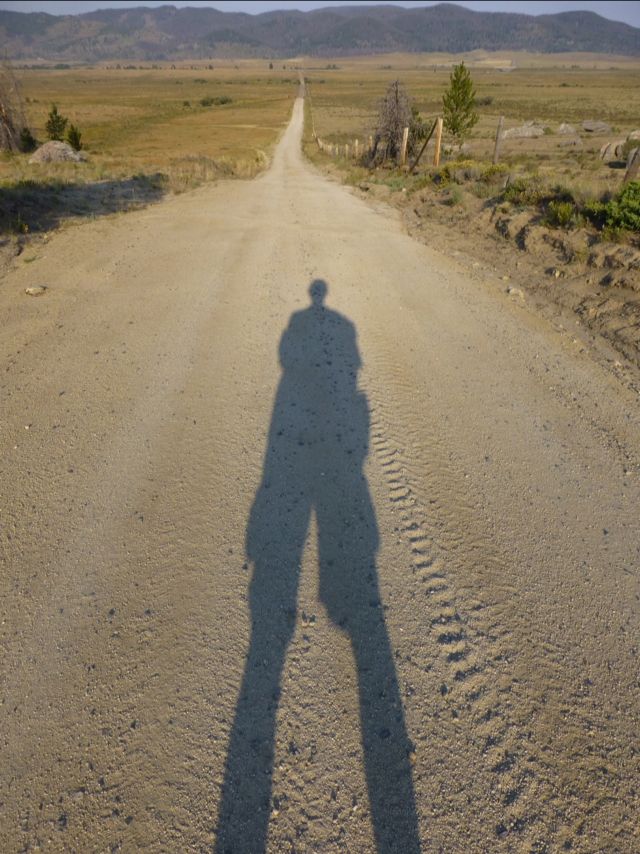 I was able to post the blog from yesterday and do some emailing and texting while I walked. The trail was well signed today too and made for easy relaxed hiking. 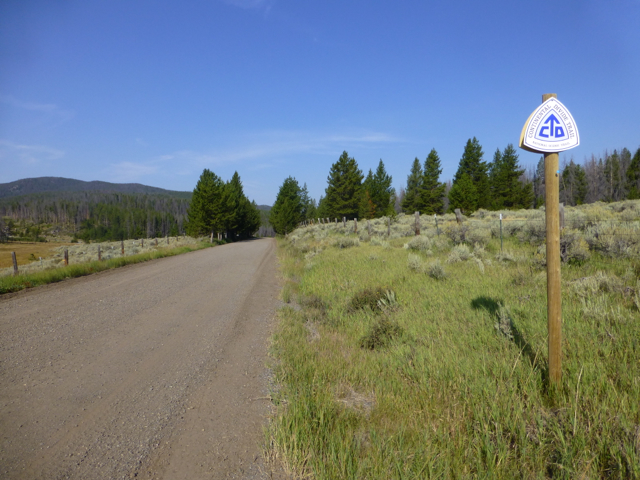 It was hot and in the 90s, but at least it was mostly forested hiking today. The shade really helped and I felt much more energized. There was even and breeze and some light clouds came in the afternoon to make it more overcast. 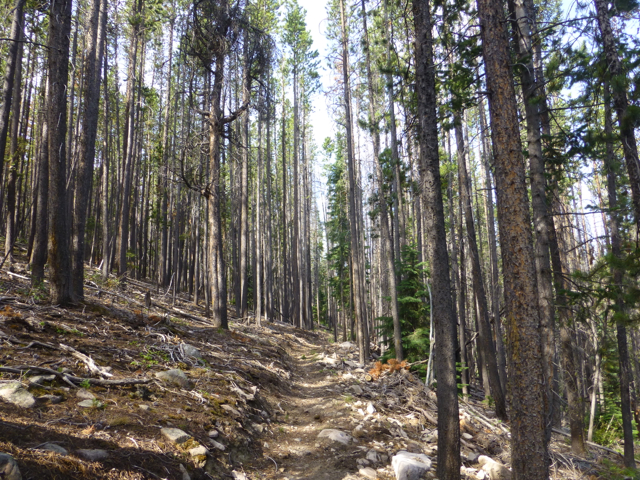 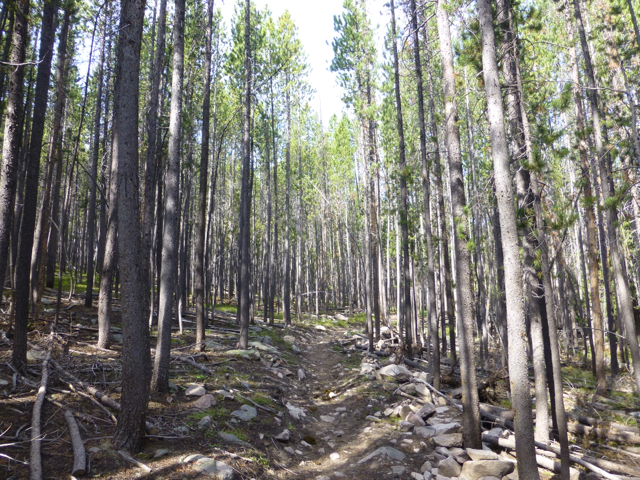 I listened to more of the audiobook, Prodigal Summer and some music on my iPhone in the morning. My MP3 player randomly stopped working yesterday morning and that’s been a real bummer as all my good stuff is on there along with all my other audiobooks. I keep periodically checking it and pressing the power button hoping it will be brought back to life. I’ve even been plugging it into the solar charger hoping to jumpstart it like a car or something. Well, today at lunch I tried the solar charger again and it came on! It was a miracle! I ended up listening to Prodigal Summer the rest of the day and the day went by much faster! 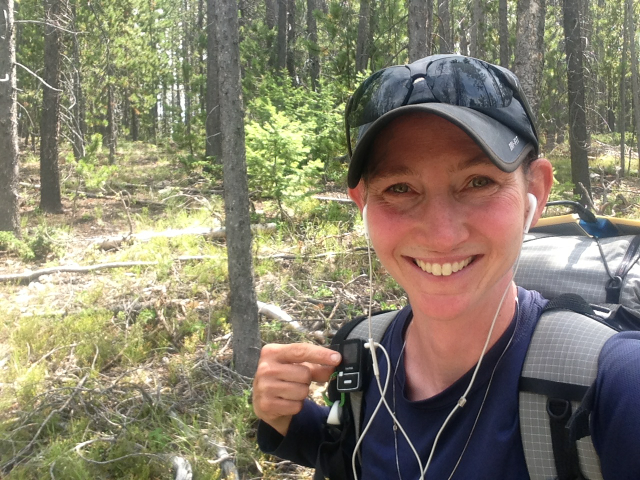 I’ve mentioned how hungry I’ve been lately and I’ve been loving lunch. I think about it most the morning as I eat bars the first half of the day. I spent most of the trail eating tortillas with Nutella and Peanut Butter. Then I switched over to tortillas and tuna or salmon. A couple towns back, in Leadore, they were short on supplies, so I had to get Ramen for lunch. I’ve been doing it everyday with chips, Oreos, and other snacks and just love it. I haven’t been having Ramen regularly for dinner like many hikers, so it’s been great. Plus, it weighs and costs a lot less than my previous options. Just had to mention it since it’s one of my favorite parts of hiking lately. I tried to get a picture at lunch today. 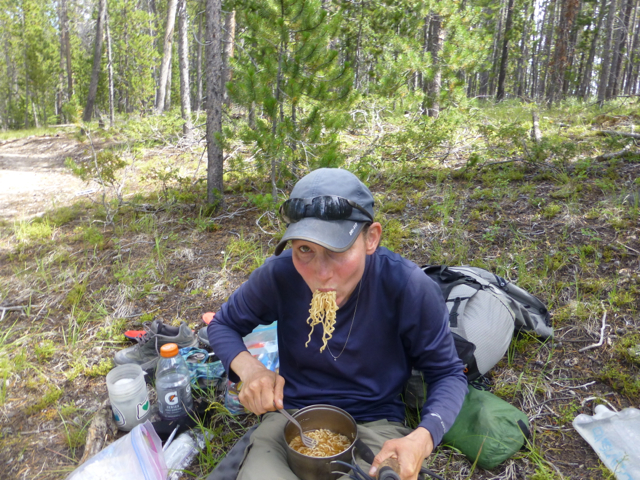 Around 6pm, I reached the intersection called Four Corners where the shortcut called the Anaconda Cutoff reconnects with the official CDT which is the Butte Route. The cutoff saves people about 3 days of hiking compared to the Butte Route and half the hikers take it. I was anxious to see who might have caught up with me and knew there was a chance I’d see someone at the intersection. There were two hikers there preparing to camp…it was Bloodbath and Rampage! They had taken an alternate route today that paralleled the trail and had less of a water gap. There was an 18mi gap between sources today. I carried a bunch of water and just accepted the gap. They had apparently passed me while on the parallel trail. Since they are taking it easy, they stopped early and camped at four corners. I talked to them for a bit and I hiked an hour and a half further knowing we plan to meet in town. I needed to get water before camp. The source I hoped for was shallow marsh, so I hiked on one more mile to the next spring, hoping for better. I hit a signed intersection and followed the CDT blazes into the woods. About 1/4mi in, I checked my GPS to find that I was no where near the next waypoint for water and was, in fact, heading directly away from the water. After looking at the maps, they said that there was new trail in this area, but that it was yet to be indicated on the map and weren’t sure where it reconnected with the route I had waypoints for. My main worry was that this trail (although signed) was not headed to water and it didn’t appear to be headed toward the trail I had waypoints for. I turned around and did the road walk that was a for sure thing and felt much better because there was no telling where that new trail led, if it had water, or if it ever reconnected with the official trail. I found the water source and it was very weak. I pretty much had to scoop water out of a small puddle that was collecting in a pool between the tree roots. It’s just a dry year out here and it’s frustrating to be having these water issues. Here is the final source. 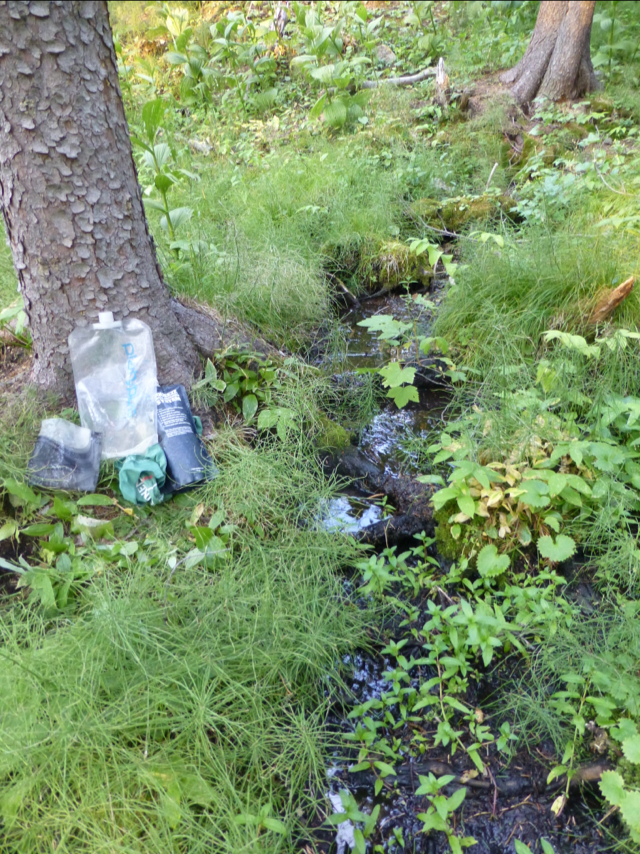 With the trail and water confusion, I got delayed and camped a bit later than planned at 7:45pm. The temps have been very mild at night and I’ve been able to use my sleeping bag as more of a blanket. I’m gonna sleep well tonight! I definitely felt a shift today and feel like things are coming together. My camera and MP3 player are working, the trail isn’t exhausting, and I’m getting that much closer to Canada. It almost feels like I’m in cruise control even though there’s just over two weeks left. The countdown is starting…