Water is a big question mark through here, so all of us have taken to carrying a lot just incase. There was a piped spring that was reported a month or so ago as being broken and having dead little animals in it when the southbounders went through(it ended up being ok). With that not reliable, I had to get 19.2mi worth of water til the next source. Here is the piped spring that was in good condition this morning. It was just 1/4mi off trail. 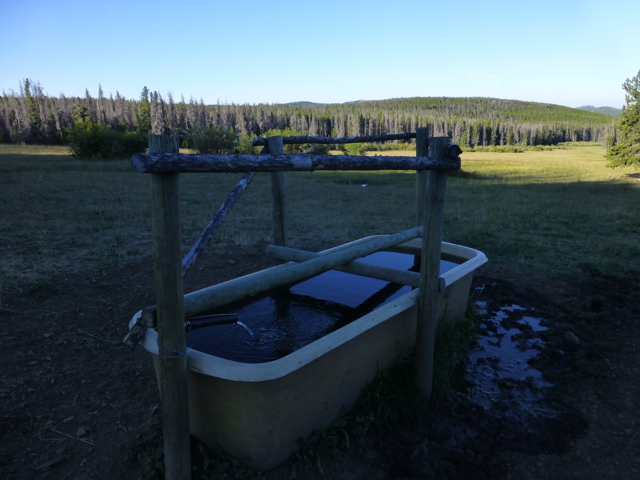 By late morning, the trail had become more of a rocky trail/road and there were some steep ups and downs. I listened to the rest of the audiobook, Farewell To Manzanar as a distraction and then music the rest of the day.

By the time I hit lunch at 12:30pm, I usually like to have about 15mi done..I was just under 13mi and was surprised that I hadn’t done more. I think lots of little distractions added up today to affect my mileage and that was frustrating. The combination of going slower on the uphills, having to carry more water and go off trail for it, many pauses to double check confusing turns, and getting off trail a couple times just made for a less productive day today. I had hoped to get more miles in to alleviate some of the pressure the next two days because they are supposed to be more difficult with a lot of ups and downs. The trail has gotten back on the Divide and a lot of today was going up and over he bumps along the divide with big views.

After lunch, I walked up on Sweet As and Aquaman who were talking to a southbound section hiker named Montana Mike. Sweet As and Aquaman left town after me yesterday, but hiked into the night with the full moon last night and passed me. We hiked a few miles together to a water source, which we took more time than we should have to find, and I hiked on ahead from there knowing they’d catch up later. In the afternoon, there were also little time wasters I had with going on wrong trails and stopping to figure out which way to go. For example, at this intersection pictured below, the gut was to continue straight(right) and the wooden CDT sign seems to point that way. The problem is that someone wrote in permanent marker correcting the sign and pointing up the road to the left. In addition to these conflicting things, there was a large arrow (where my shadow is) on the ground made out of logs that points to the right…after some timely double checking, I figured out it was the turn to the left and took apart the arrow pointing otherwise.

Somehow, at the end of the day, I was on a trail that had a CDT marker on it and five minutes later the trail faded. I checked and I was apparently on the wrong trail. This happened twice to me today and I must have a knack for it. I end up having to go cross country for 10mins(which feels much longer) to relocate the trail. The others don’t seem to have this problem as often as I do, so I just seem to be especially skilled at finding and following trails that are now the CDT. Not the best skill to have out here…I ended a mile or two early after getting off trail right at the end of the day. I decided to just call it quits by the time I got back in trail and saw good camping. I just need to start fresh tomorrow.
Around 8pm, Bloodbath and Rampage came by. They had planned to go another half hour and decided to keep hiking. They are wanting to get to our next resupply location(Benchmark Ranch) a few hours earlier than I feel a need to do, so I might just meet them there in three more days if I don’t catch them tomorrow. I’m really enjoying the solo freedoms and doing things at my pace, so we’ll see. Either way, the plan is for the three of us to hike together north of Benchmark as that is where the bear presence is higher and there is a fire reroute that we will be taking. Off to sleep!