Aug 22nd
4.3mi After Stemple Pass(2541.2)-Below Burned Point(2574.3)
Campsite Elevation: 7,081ft
33.1mi
Whew! I am spent! Today had a lot of hiking and it hasn’t been this strenuous in awhile. I haven’t been setting an alarm and I’ve been entertaining myself in the morning by not even checking the time til I hike out…and it’s consistently been within minutes of 6:45am. The last two nights have been the Blue Moon nights and the moon had been so bright that it’s almost like sleeping with the lights on. It’s been pretty amazing. It has also been very present still when I’ve been getting up in the morning. Well, this morning I woke up and sensed it was a bit early, but started packing up to get a jump on what I knew would be a more difficult day. The moon was so bright that I didn’t need my headlamp. Then I noticed the moon was on the wrong side of my tent and that it was still on the same side it was when I went to sleep. I turned on my phone and checked the time…1:15am! Ha! That would have been quite a jump on the day. I fell back asleep, but kept waking up anxious to hike. I ended up just waking up early and I started hiking at 6:15am. Bloodbath and Rampage were camped just about a mile later and were getting ready as I passed by. We knew we had lots of climbs ahead today and I needed to get a head start since they hike the hills faster. I knew I’d see them by lunch. Fortunately, the morning had some good downhills that I was able to make up time on. By the time I stopped for lunch at 12:30pm, I had done over 17mi.

Bloodbath and Rampage hiked up as I was having lunch, but needed to hike a few more miles to get more water before they could have lunch and they hiked on. I saw them after lunch and continued on to where our rollercoaster would begin at Rogers Pass. When I talked with Mtn Rat the other day, he gave me a heads up that the hiking north of Rogers Pass would be difficult straight up and straight down hiking for about a day. His exact words were, “Fucking Hard!” If Mtn Rat says that, then it’s definitely going to be strenuous! We still wanted to make low 30s for the day, so we were glad he warned us about the climbs. THANK YOU Mtn Rat! I also had a special little gift waiting for me at the base of the climbs. A sister of one of my friends left me a card tucked behind the sign at the pass. The front of it said, “One Day At A Time, One Step At A Time.” 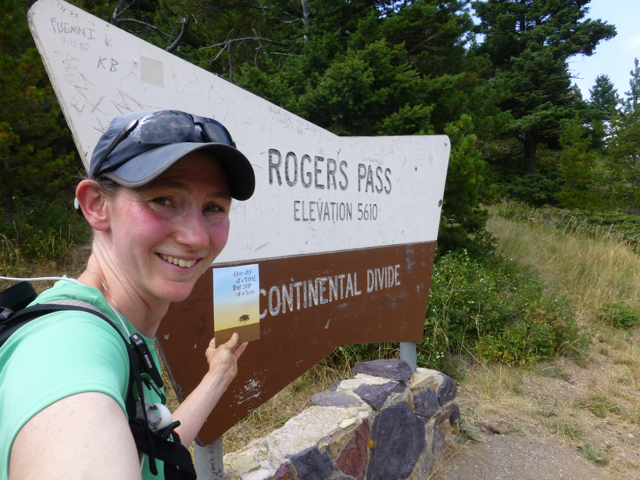 It was the perfect placement of that card with what I had ahead of me the next five hours of the day. I ended up repeating it as a mantra as I dripped sweat and carried 8lbs of water up and over those hills. THANK YOU Laura for the added motivation today! Also, today I was very entertained by a new audiobook. The Absolutely True Story of A Part Time Indian by Alexie Sherman. I know that sounds like an odd title, but it’s really quite a book! It had me laughing out loud and also crying. It was quite a book! I really recommend it and apparently it is even used in some schools. It was really motivating as it’s an inspirational and emotional story. I want to thank Funhog and Kristi who were instrumental in my choosing this book. THANK YOU!!! 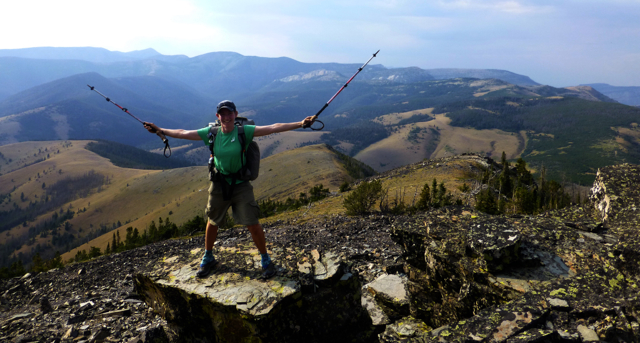 While I’m at it, I want to mention that while I was on the climbs this afternoon, my step mom Robin, who does my resupplies, texted me to say that she mailed my FINAL resupply box! How exciting! The chore of doing any thru hiker’s resupply is quite an undertaking and requires an organized and reliable person. In addition to the regular resupply stuff, Robin had the added challenge of organizing all the care packages everyone sent. It is a task few would be willing to undertake and I am eternally grateful to Robin for being so reliable and organized. Congratulations Robin! Your resupply thru hike is over! THANK YOU for all that you’ve done! I can’t express the relief it is to have someone so reliable doing those boxes. It allows me to have one less thing to be “wired” about and food is fuel out here, so it’s essemtial! I know my step sister Katy helped too, so THANK YOU to Katy too! Robin and Katy, I owe you two big time! 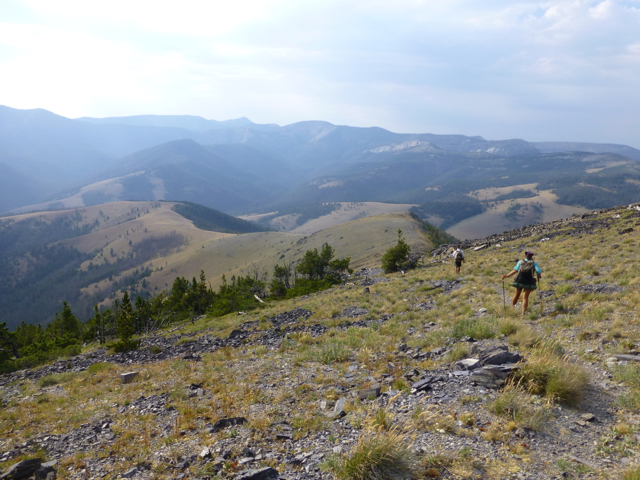 Bloodbath and Rampage easily caught up to me going up Rogers Pass. We knew we wanted to camp together tonight and had a spot picked out incase we separated. On one of the climbs along the Divide, the two of them were a good 30yds ahead of me. I created the top of the hill and they had already gone over the side, so I couldn’t see them. I followed the cairns over the side and about a 1/2mi down to a saddle and CDT post. No Bloodbath and Rampage. They had just disappeared. Since I was on the Divide, I could see at least 1/2mi in all directions. They were nowhere to be found. After waiting a moment, I figured they were ahead and just hiked on. Then they appeared over the hill behind me! They had taken the correct route around the hill and were waiting for me up top whereas the cairns I saw were apparently a shortcut down the other side, oops! They were worried I was on the wrong ridge on another side of the hill. That’s how easy it is to lose track of each other even though we are so close, whew! We stuck together the rest of the day and were lucky that it was cloudy most of the afternoon. We’re also glad we only had to do half the rollercoaster today and will do the rest the first half of the day tomorrow. Whew! 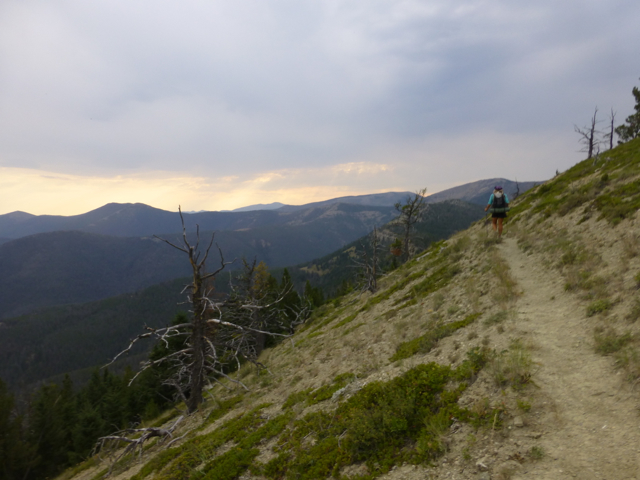 We are camped in a nice saddle and the clouds have moved in with the wind picking up a bit. It looks like it might rain. 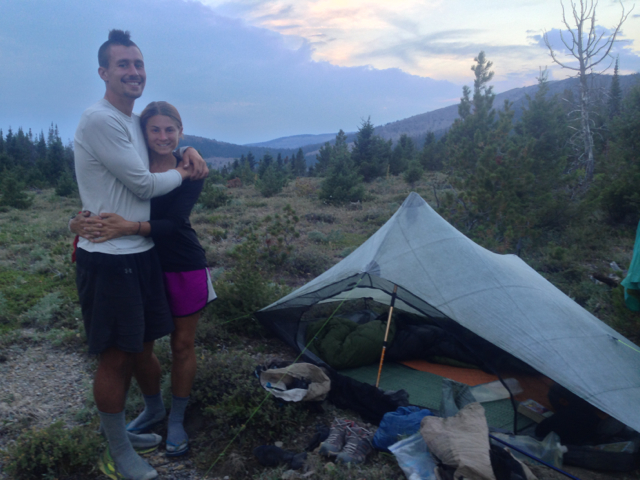 We plan to stick fairly close to each other from here to the end. I may get a head start in the mornings since they tend to hike faster. My plan is to get up a bit early again tomorrow to get a head start on the uphills.