Aug 25th
Intersection w/Indian Creek Tr(2628.8)-Inter of Wall Creek Tr & Bungalow Mtn Tr(2655.8)
Campsite Elevation: 6,400ft
~27mi
Last night, we camped near a stream and the white noise always helps me to sleep. Since we are doing shorter mileage days, we have decided to sleep in without an alarm. Lately, without and alarm, I still tend to wake up pretty early and get on trail by 6:45am. This morning I didn’t even wake up until 6:40am. It was glorious! I don’t think I’ve slept this late all trail! I started hiking by 7:25am and it was really great to sleep in. Bloodbath and Rampage weren’t far behind me and I knew they’d catch me on the morning climb that we had. All of today and tomorrow will be spent on the reroute through the Bob due to fire. The reroute isn’t far from the CDT and does parallel it, so it doesn’t seem to change the mileage much. We don’t know for sure because mileage isn’t given, so my mileage for today is estimated. At this point, we are pretty good at gauging our mileage and pace. The reroute was not signed as we hoped at all the intersections. Some turns were more obvious than others, but I am fortunate that the maps I loaded onto my GPS have the alternate trails well marked and labeled. What I recommend to other CDT hikers is that they will be fine just taking a picture of the reroute map and following that. It’s especially helpful to have a GPS, but I’d only recommend buying the big Bob map if you don’t have a GPS and want the added security of having a more detailed map. When I woke up, I could smell the forest fire and it came in waves throughout the day. The day started with a good long climb over a pass and it brought our only big views of the day. The Bob is a highlight of the trail and I was glad to at least see some of it up high and out of the trees.

Most of the day was spent in dense brushy forest though. It was pretty hot and humid too. All three of us dragged today. We think it’s the combination of the hiking conditions and the fact that we are at the end of a long hike in which we have done at least 30mi/day most days for the last six weeks or so. Our bodies and minds know we’re nearing the end and we are ready to rest. 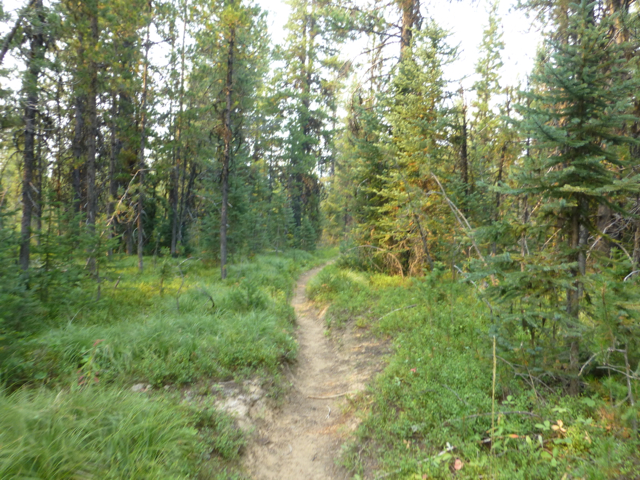 We are really happy that we decided to cut back the mileage to make the last two weeks more enjoyable. We only needed to hike until 6pm (which I normally hike til at least 7:30pm) and that was motivating too. To keep ourselves entertained, we listened to the audio of the original BBC series, The Hitchhiker’s Guide To The Galaxy. It was given to me on an sd card from a blog follower and it was perfect! THANK YOU David! I am not familiar with the series or the books, but it turns out that Bloodbath and Rampage are big fans of the books and they were especially excited to listen to the original series. It is really unique, funny, and entertaining, so it was just what we needed today. David sent me the complete series and I think we listened to at least 7hrs of it today. I’m able to keep my player and the iHome speakers (we both have) charged with my solar panel, so we have unlimited listening. It was kinda like having a movie all day since this wasn’t an audiobook, but an actual radio series. It really made the day for us!
We are camped just below a climb up a mountain trail, so we are hoping for views in the morning tomorrow. The second half of today, the haze and smell of smoke got much stronger as we are relatively close to the fire’s center. 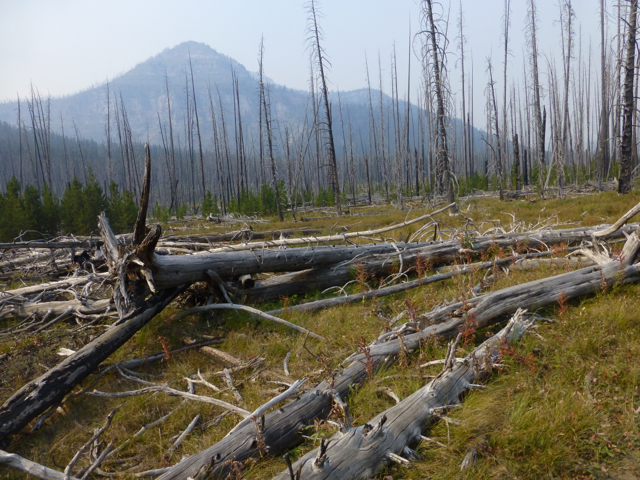 We stopped at 6pm and all three of us were pretty tired. We were very happy that we stopped when we did because thunder started to rumble and a thunderstorm actually hit at 7pm. I was able to get a picture just as the rain started.

It lasted just over an hour and the second half of it was just a steady rain. It has now stopped and cooled significantly, which is nice. Hopefully, it will help to quell the fire some. I’m pretty tired and going to sleep well tonight, that’s for sure!