Aug 28th
Int w/N Fork Badger Tr(2707.5)-Marias Campground(2732.5)
Campsite Elevation: 5,223ft
25mi
Last night, Bloodbath was looking over the maps and noticed an alternate option for today that would save mileage and avoid a lot of ups and downs. He was lobbying for the alternate, but I generally stick to the “official” route unless there is some great sight to see on the alternate. Most people take the alternates for the short cuts and I’m not on that bandwagon even though there are times I wish I was. Rampage was also leaning toward doing the official trail because we were already doing a short day and had no reasons to make it shorter, but I could tell they would probably end up doing the alternate. Bloodbath seemed pretty set on it, but I could tell the motives were not just to save miles and effort…but I couldn’t figure out what it was. Either way, I was pretty sure I’d be alone on my route choice today. I left camp at 7am wanting to get a good jump on the day. I knew with the higher elevation and our planned campsite at a major road, that I’d be stopping for a decent amount of time if I got service. I thought I might get enough service to be able to finally post the past five blog posts. Plus, whatever correspondence had built up after so many days without service. Soon after I started hiking, I ran into two women section hiking southbound. The first other people we’ve seen in three days! They had taken the alternate and commented on how clear and easy it was along a dirt forest road. I knew that as soon as Bloodbath and Rampage heard that, they’d have trouble resisting the alternate. Especially after the full day of overgrown trail we had yesterday. Here’s what the road looked like. Nice, wide, clear, and very enticing… 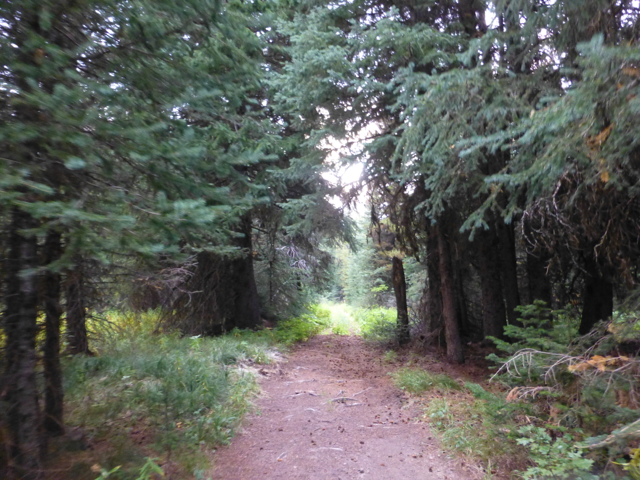 I know when I read journals on the CDT, I always wondered how the maps and alternates work. Well, there are two main sources. The so called “official” trail is usually in quotes because it’s the signed and marked trail, but not always the most traveled option by thru hikers. Those waypoints I have are generally what I try to stick to and they are from a fellow named Jerry Brown who did the official waypoints for the CDT a few years ago. The other maps are Johnathan Ley’s maps. He hiked the trail in 2001 (I think) and made unofficial maps that have just been improved upon each year. They contain notes about the trail, water, and suggested alternates. Everyone varies on which way they lean with the maps and I tend to stick to the waypoints 90% of the time. Here are today’s examples showing my first and second half of my day today. The top one shows the official trail in purple and the bottom shows the official trail in red. I took these pictures at night in my tent, so sorry about the quality. 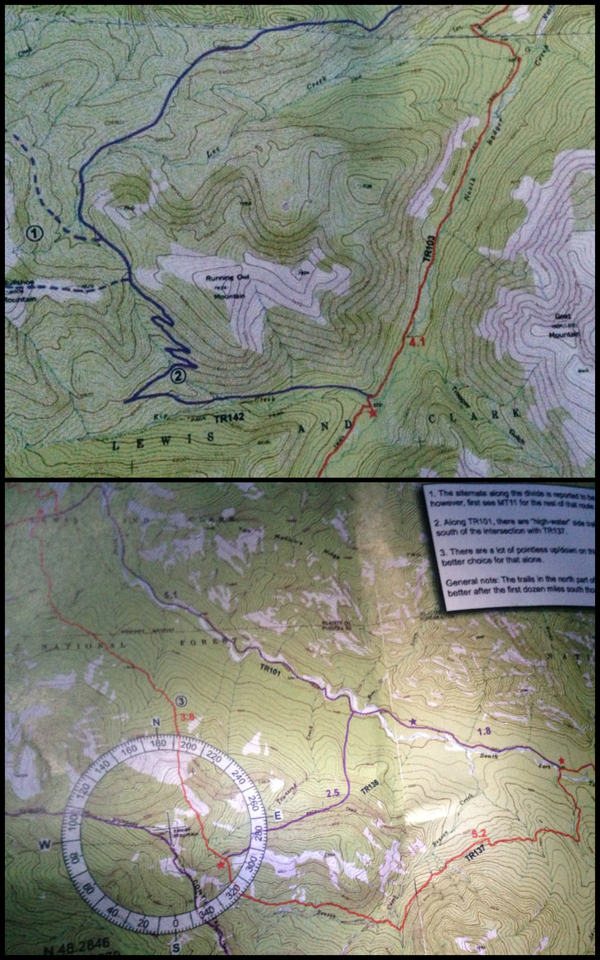 The way Ley chooses the colors are that the purple are the recommended route regardless of whether it’s the “official” CDT or not. Confusing enough!? That’s why I just look at the waypoints a rarely touch my Ley maps, but I’m actually the opposite of most hikers out here as they enjoy the little short cuts and feeling like they out smarted the trail in some way. So in the first half of my day, the “official” route is recommended even though it obviously goes out of the way. It was actually great. I got the ridge walking and views I needed after yesterday’s claustrophobic trail. In drizzled on and off for extended periods the first half of the day, but it was light enough that it wasn’t too much of a bother. I did have to use my iPhone for some of the pictures when I put the good camera in a dry place in my pack. 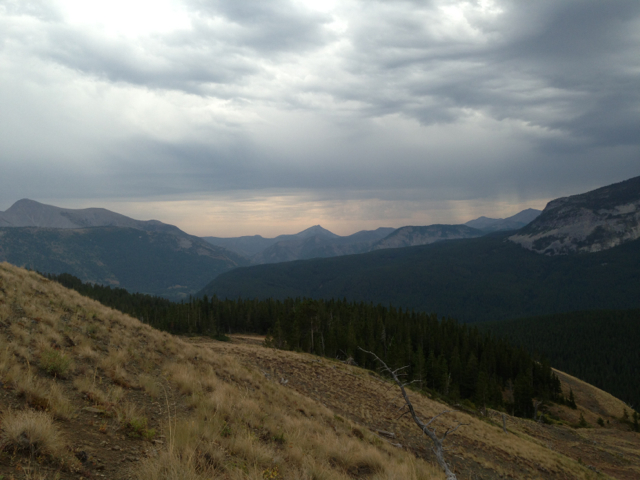 The exciting news is that I got service up top and got to sit for an hour and get the back logged posts up just before the rain started. Realizing that Bloodbath and Rampage hadn’t caught up to me, I knew they had to have taken the alternate and that I’d see them at our predetermined camp spot. My view as I sat up top. 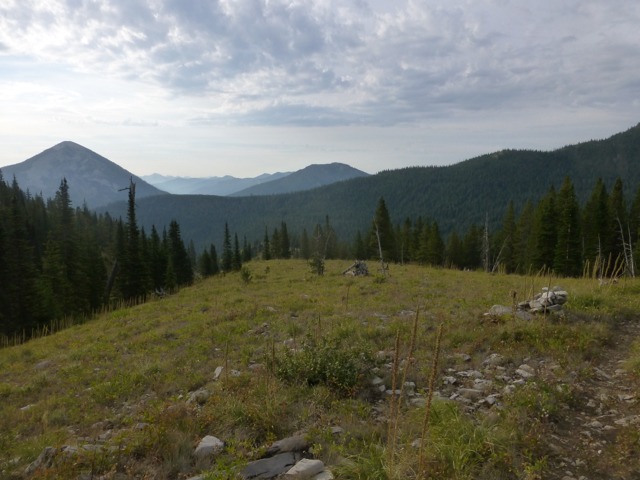 The trail reconnected on that forest road for a bit and then swung out again for the second half of my day. As I turned off the road onto the trail, I could tell this one would not be as enjoyable as the first. It was in a burn area and had overgrown trail most of the way with lots of pointless ups and downs (PUDs). Again, the claustrophobia set in. The rain had stopped, but the brush was so wet that I wore my rain pants. 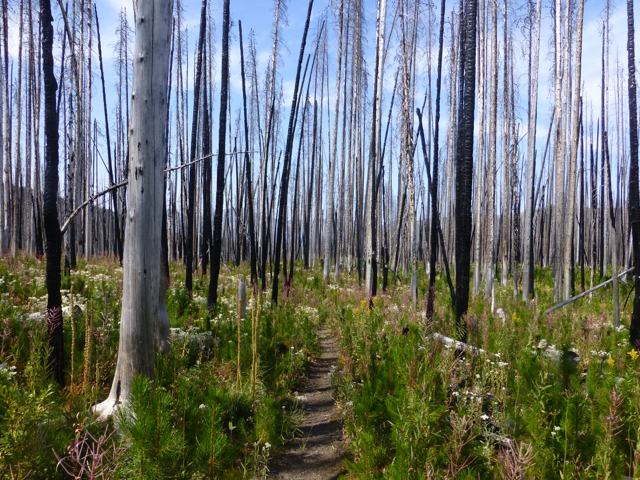 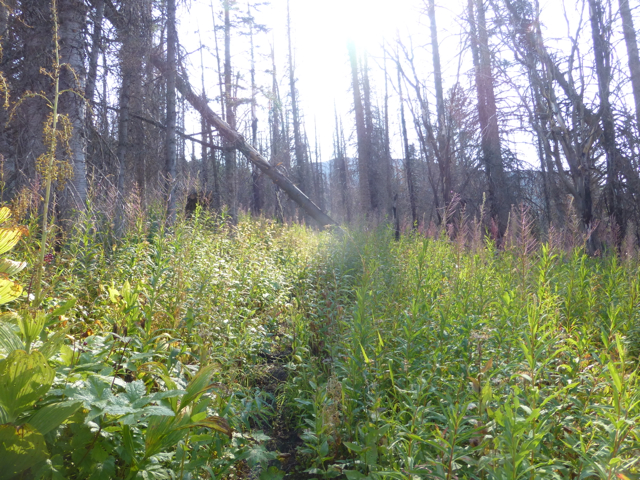 Once the sun came out, I found a spot to have a late lunch and charge my phone as I had run it down significantly. I sat there for over an hour charging and emailing. I got a text that Bloodbath and Rampage were already at camp and it was only 4pm…still trying to figure out the motivation for cutting and getting there so early, I packed up and hiked on to meet them. The trail was mostly overgrown and at least drier than before my break, but it had 20yd sections that looked newly cleared. It was odd cause these stretches were so randoms and short, but I was very grateful! 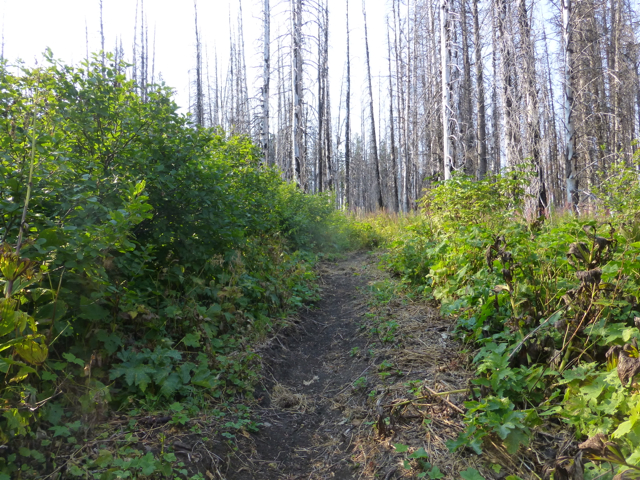 After hiking for 1.5hrs, I looked back and noticed my solar charger was no longer on my pack! Nooo! I knew it was somewhere in the last few miles and must have gotten caught on the brush and fallen in since I never heard it hit the ground. I was only about an hour away from camp and had to suck it up and turn around and hike back uphill in the brush not knowing if I had dropped it 1/4mi back or 4mi back…fortunately, it was lying in the trail a mile back, which adds two miles to my total at the end of the day, ugh! I made it to where Bloodbath and Rampage were camped and it was right outside the boundary for Glacier National Park so that we could get as close to the town of E Glacier, our last town stop, without breaking any national park camping rules. That means we are camped about 200yds from a major train track. A train seems to come by every two hours or less…this will be interesting and I’m putting the earplugs to the test. The other option was to pay $10 to camp across the street at the campground where you can just as easily hear the highway traffic and the trains. Ah, the sounds of nature! Here is my tent with a train running behind the trees. 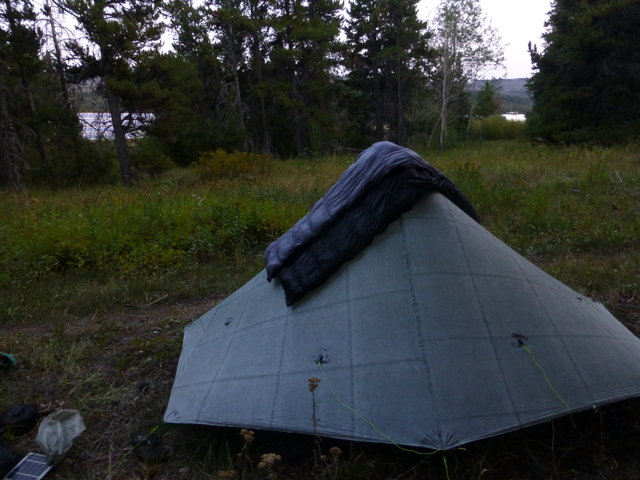 As I approached Bloodbath and Rampage, the true motives of the shortcut revealed itself…a case of beer! Bloodbath had hitched into town and they were splitting a dozen beers, and seeing as I don’t drink, they had gotten me a chocolate milk! Score! I got to have a Mountain House from my friend Heart, and my favorite drink, yay! I sadly noticed today that I was able to take my pants off without unbuttoning them and that they are falling off me…good thing I only have six more days before I start fattening back to my normal size! 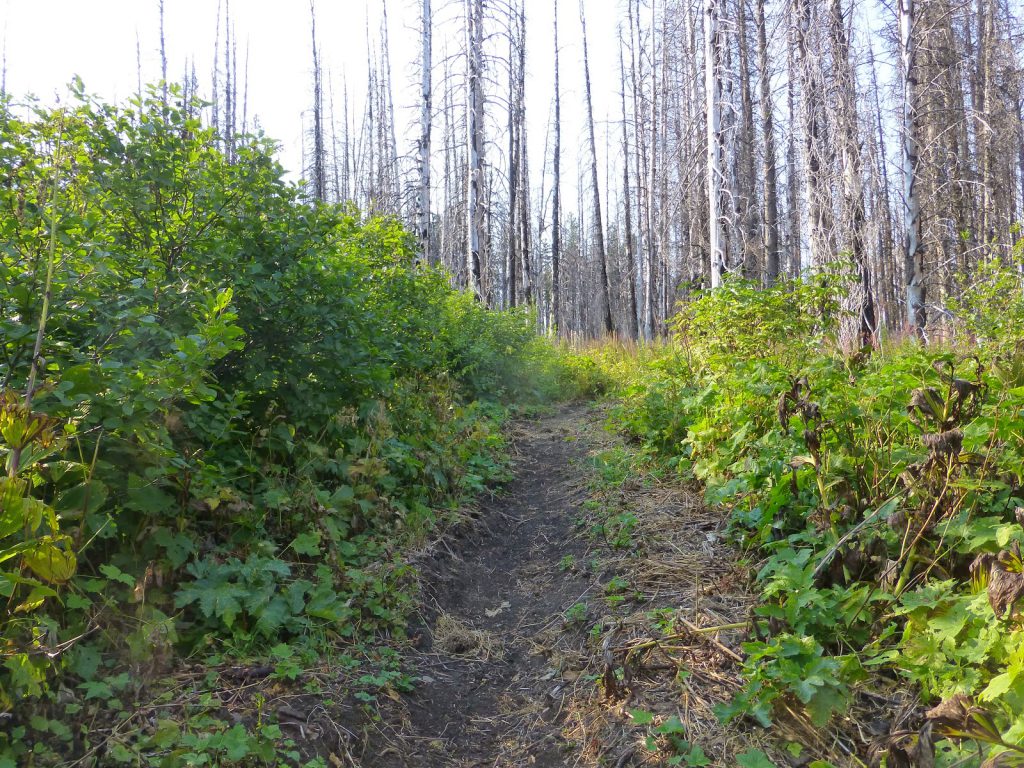 This is even more perfect because I had somehow miscounted and run out of my usual nightly indulgence of a chocolate carnation breakfast drink with powdered milk. Tomorrow, we plan to get up early and get the 15mi into E Glacier done before noon. It’s been 10 days since shower, laundry, and a bed and I can’t wait!