Aug 7th
Pioneer Creek(2,164.6)-1.5mi before 4th of July Creek(2,196.6)
Campsite Elevation: 8,939ft
32mi
I woke up pretty early this morning and got going by 6:10am. Both Bloodbath & Rampage and Stopwatch & Optimist were still in their tents as light was coming up. I knew both couples wanted to do at least 30mi and that there would be more uphill today, so I left early with the plan of taking it easy for the morning. I listened to more of the audiobook Gold and was pretty groggy after the 38mi day yesterday. I was cruising and the trail was remarkably good. My phone was low on battery because this whole leg has been in the forest a lot and I’ve been unable to fully charge it. 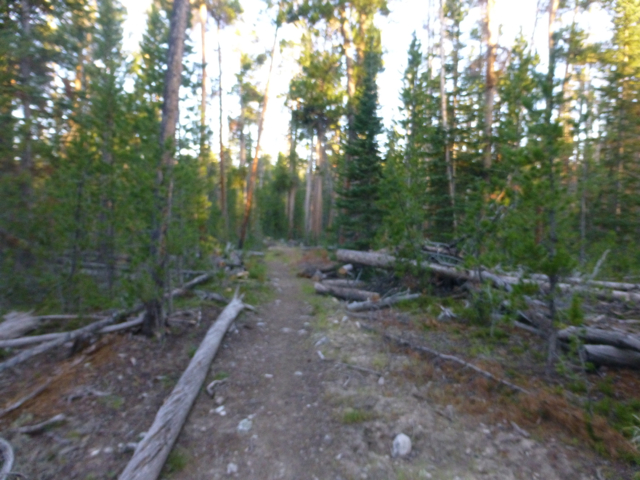 I was trying to avoid using the GPS on the phone to save the battery. I have a Garmin GPS as a backup, but it takes awhile to load and I rarely use it. Well, I checked it a couple hours into hiking this morning…I had missed a turn and was 1.5mi off trail! Shit! My relaxed morning immediately went from a leisurely walk with an audiobook to a full on run to get back on trail. As I got close to the intersection, I saw the footprints of the other four. They too had missed the turn and I could see where they turned around and figured it out about .3mi after the turn. I was pretty much running on and off for about an hour before I caught up to Optimist and Stopwatch taking a break. They said Bloodbath and Rampage were just ahead and that they all thought I was ahead of them. I ran a bit further and caught up to Bloodbath and Rampage. What a waste of a morning! I got going early just to relax, it wasn’t even 9am and I had put in an extra 3mi and wore myself out running. Argh!
The trail continued in the woods for the morning and by mid morning the climbing began. I hiked with Bloodbath and Rampage the rest of the day. Both Rampage and I were not enjoying the climbs that felt long. This was pretty much the first mountainous climbing we’ve done since the Winds in Wyoming and I felt slow. For about three hours or so today, we listened to the Gold audiobook and are really enjoying it! It really helped to take our minds off our tired bodies. The scenery was great as we climbed and it was nice to be out of the forest and recharge my phone with the solar charger as I walked. 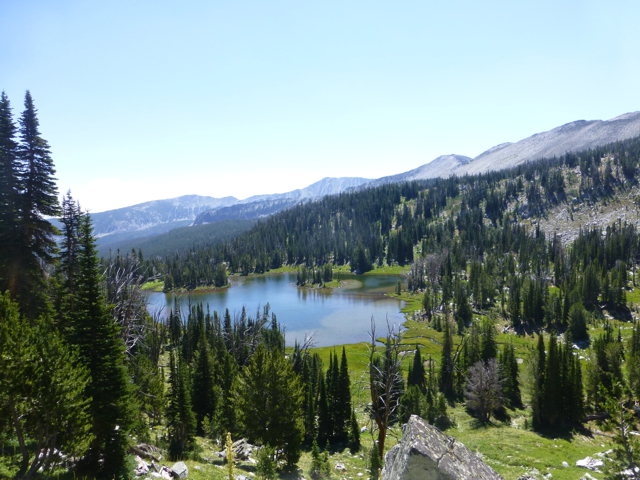 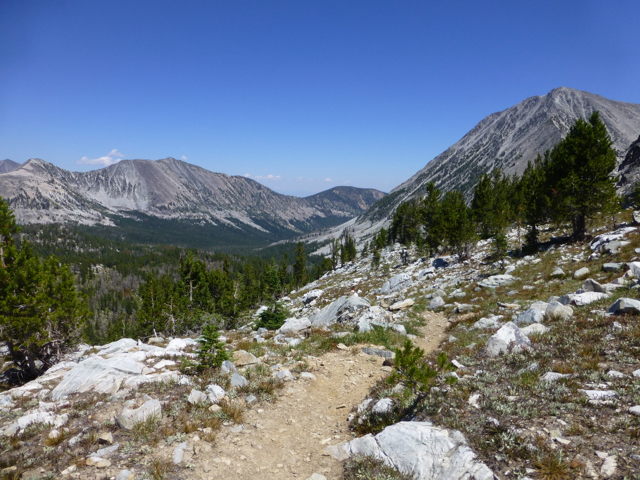 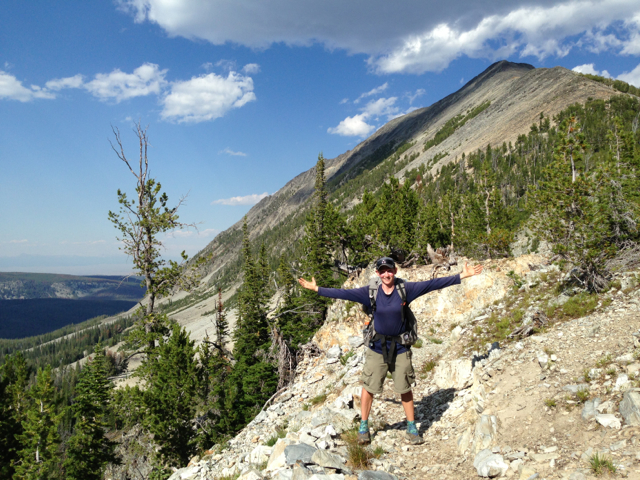 This leg I’ve been thinking a lot about how I want to finish the trail and my schedule for the next month of hiking. With only 5 resupplies left, it’s feeling like it’s almost the homestretch. It’s still like 600mi to go, so a lot can still happen. Being around these two couples has been motivating, but I’m coming to the realization that I’m not doing the trail the way I’d most enjoy it. I teamed up with Bloodbath and Rampage when we all wanted to push through Wyoming. I did that with the plan of buffering days for relaxing in Montana, seeing my brother and his family multiple times, and just finishing the trail without stress of snow or severe weather in Glacier. I have realized that I’ve been in Montana for a couple weeks now, and I’m still pushing. Why? I got caught up with these two couples who have schedules to finish early. Today I decided to commit to a bit more of a relaxed pace, even if that means I’ll be hiking more solo I actually don’t mind the solo hiking, but I know that few other hikers are within two days of me if I slow down. I may end up in a pocket on my own. I am willing to accept that. In two legs, I will be doing the “official” Butte route that is about 3 days longer than the Anaconda cutoff many hikers take to shorten the trail at the end. I think I’ll have a lot more hikers around me after that leg. Either way, I’m excited to take in these last weeks and really indulge in what I’ve worked so hard for all trail. I pushed on the trail knowing I wanted to relax and enjoy the Bob Marshall Wilderness and Glacier National Park at the end. When I say relax, I’ll probably still do high miles, but just not really high. I’m looking forward to not setting an alarm and stopping early(for me before 7:30pm). I’m excited about what’s to come and am looking forward to doing my own thing for awhile.
As for the rest of today, I told Bloodbath and Rampage my plan and decided that I’d camp at 7:30pm regardless of mileage. They ended up wanting to go 1.5mi further and I’ll probably see them tomorrow. There seems to be a fire around us somewhere as we can smell it and if is hazy. It makes for a pretty sunset with pink skies, but is concerning as we don’t know how far or how big the fire is.

Optimist and Stopwatch arrived just before dark and camped with me, which I was hoping would happen. 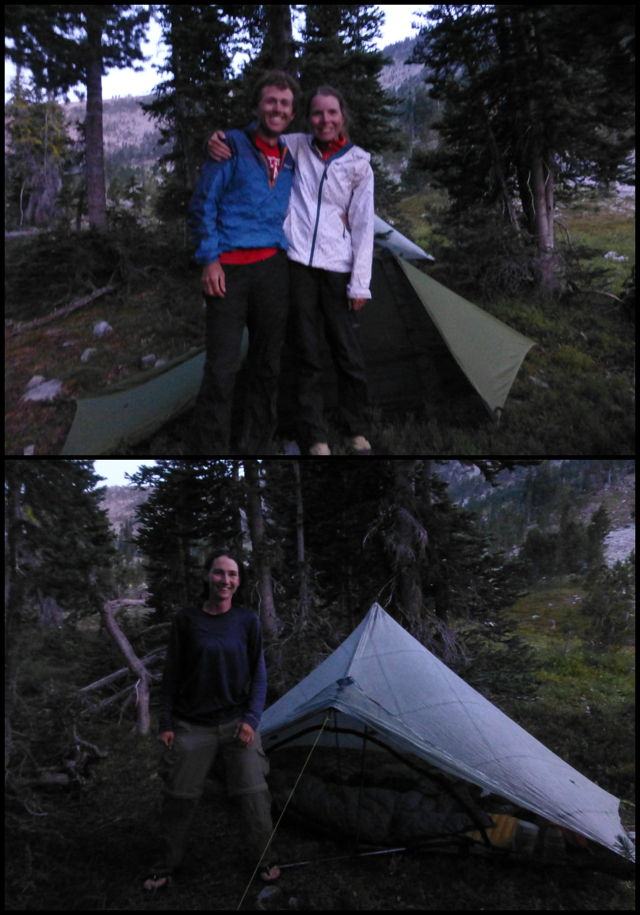 They are fun to be around and I’m bummed they have such a tight schedule. They plan to do 30s the rest of the trail without a break, so tomorrow will probably be our last day together. It’s been fun to be around these couples while we overlapped.