Aug 30th
E Glacier(2747.5)-Oldman Lake CG(2765.3)
Campsite Elevation: 6,797ft
17.8mi
*Warning, long entry, but totally worth reading!
Before I start, I just had to share this funny story from Tatu Joe who was at dinner last night. If you all remember, back on day 96, we had the hilarious bear spray incident with my brother…if you missed it, go back and read about it. Well, as it turns out, after my brother got all the pepper spray rinsed off his face, clothes, and body that day, there was no way he was going to go into the bush and retrieve the out of control can of bear spray. Well, word spread along the trail and I had told southbounders in hope that one of them would pick it up and get it thrown away…but understandably, no one would touch it! Well, last night, Tatu Joe told me that back when the incident happened, he was a few days behind me with Speedbump and Estero. They camped there a few nights after us and Tatu jokingly picked up the can to pretend to spray it. Later, they roasted hot dogs and his was really spicy. It got so bad that he couldn’t take it and touched his face. Then he had the overwhelming sensation of pepper spray in his eyes and nose. That’s when it hit him that it wasn’t the hot dog and that he was ingesting pepper spray from the bear spray! He said even one of the other guys had the same reaction. The story doesn’t end there…Tatu woke up the next morning to pee…yep, you guessed it. That stuff was still on him and he said it stung horribly! It wasn’t until recently when he caught up to Optimist and Stopwatch that he found out the can came from me, ha! To this day, I think that can is still sitting there looking to haunt another unsuspecting victim…I just had to share that story!
Okay, back to today, the most inspiring day I’ve had in a long time! Despite staying up til 1am working on my laptop, I still managed to be wide awake by 6:30am without the alarm this morning. So much for sleeping in. I got more done and wanted to get a start around 10:30am. Now that we are entering Glacier National Park, we have a permit for campsites we selected, so we know our exact mileage and endpoint for the final five days. Today was a short day of 18mi to our first campsite. Bloodbath and Rampage wanted to leave later, but I knew I’d be taking in the sights with slower hiking, pictures, and video so I left about an hour before them. On my way out of town, I started hiking along the main road and looked up at the clouds and mountains I was headed to. It all suddenly hit me and a wave of emotion dean through me, whew! Just as that happened, a car pulled over and a guy jumped out and yelled, “Wired!” It took me a second to realize who it was and it was Joe, one of the cross country bike riding twins I met on Day 120 as I was leaving Helena. They were going to try to meet me for dinner last night and it turns out they couldn’t get there in time. They had even sent a box to the PO thinking they’d stay in E Glacier and someone had given them a ride to come get the box. They didn’t have my number to contact me, so it was a great coincidence that they were driving by just as I was hiking out. Just a fun interaction and still guys I hope to overlap with someday in the future.
It was a 10mi hike to Two Medicine where there is camping, a ranger station, and store. I hadn’t realized how accessible and day hiker friendly Glacier is. It really is amazing with a whole range of possibilities for any type of outdoor person. About 5mi in, I was on a ridge using my final phone service with this great view as a preview of what’s to come. 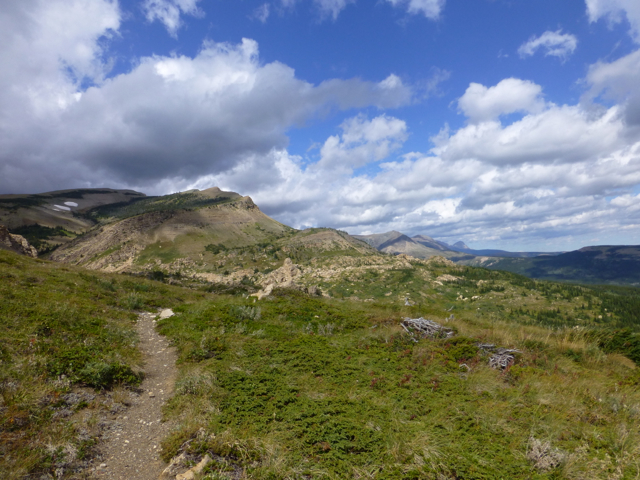 Another hiker came up behind me. It was a section hiker I’ve yet to meet named Two Weeks, Three Days. He is 70yrs old and did most of the trail from mid Wyoming this summer. Totally inspiring and he was great to hike with the next five miles to Two Medicine. His name comes from when he did the AT as his first hike a few years back when he retired. His wife told him he’d only last Two Weeks, Three Days…she was wrong! He has competed the AT and the PCT. He actually finished the PCT by doing WA the same year I did the PCT. He finished a week after me and we have mutual hiking friends. In fact, a couple he finished with, Seahorse and Chili Dog, are meeting us at the border in a few days. Again, such a great little hiking world! Anyway, we hiked to Two Medicine where he was camping and separated as I hiked on further. Such an inspiration! He hiked up a steep pass with me of over 2,000ft and kept up just fine. Just amazing! Speaking of amazing, check out the views as we hiked down to Two Medicine Campground and Lake. 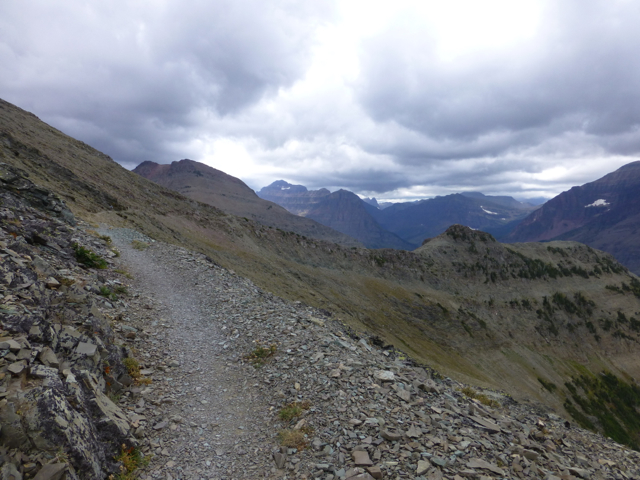 It just blew me away and I can understand why some say this is the most incredible place to backpack. I really haven’t felt this way in awhile and needed this! It reminds me of why I’m out here and how fortunate I am. It was cloudy and very gusty which made it cold up high. It made me think of how quick things can change up here and how glad I am that I pushed to be here in a time just before the snow hits. Totally worth the effort!

I just really enjoyed taking it easy, hiking relaxed, and talking to day hikers today. I really want to take in these final days. Halfway to my final destination, Bloodbath and Rampage caught up and hiked with me the final four miles to our camp at Oldman Lake. The sites at Glacier were smaller than we expected as they are 15’x15′, so it seems that we are going to be camped nice and cozy next to one another the rest of the trail. I got a picture in the morning as it was dark by the time I thought to get a photo.
The camping areas are nice with a bear hang, a separate eating area, and a pit toilet. The lake was just down from the camping and was beautiful!

There was one other couple and two rangers also camped there. We all ate dinner together in the food prep area, and it was wonderful company! 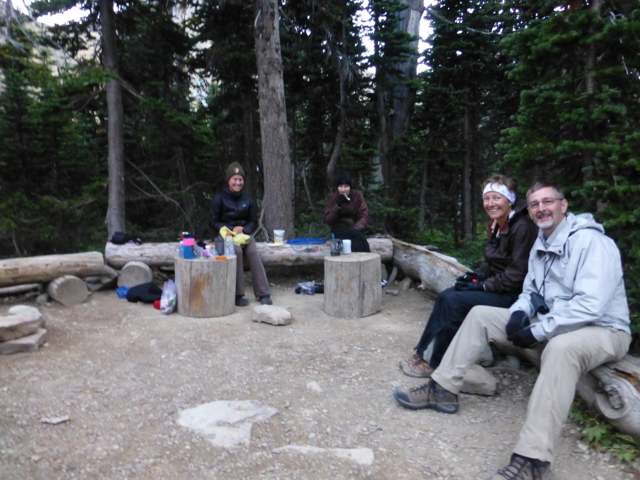 Bloodbath and Rampage retired early as it was surprisingly chilly out and I stayed and chatted til dark. Just a great way to end a really great day! I’m such a happy camper!