Sept 1st
Red Eagle, FT CG(2784.4)-Many Glacier CS(2814)
Campsite Elevation: 4,939ft
29.6mi
What a great day! It started off kinda rough. We needed to do 29.5mi to get to our assigned campsite at Many Glacier. I got going early on my own at 6:30am knowing it would be a long day and I’d want to take my time and take it all in. I knew Bloodbath and Rampage would catch up later in the day. The sun was just coming up, it was in the mid 30s, there was a lot of brush, and it was all covered in frost. I kept my beanie and puff (coat) on for a couple of hours. The first 11mi of the day was the dense brush that really gets to me, so I listened to more of the audiobook, Empire Falls, to try to keep myself distracted. The brush was often big leaves up to my shoulders interlocking over the trail. Urgh. 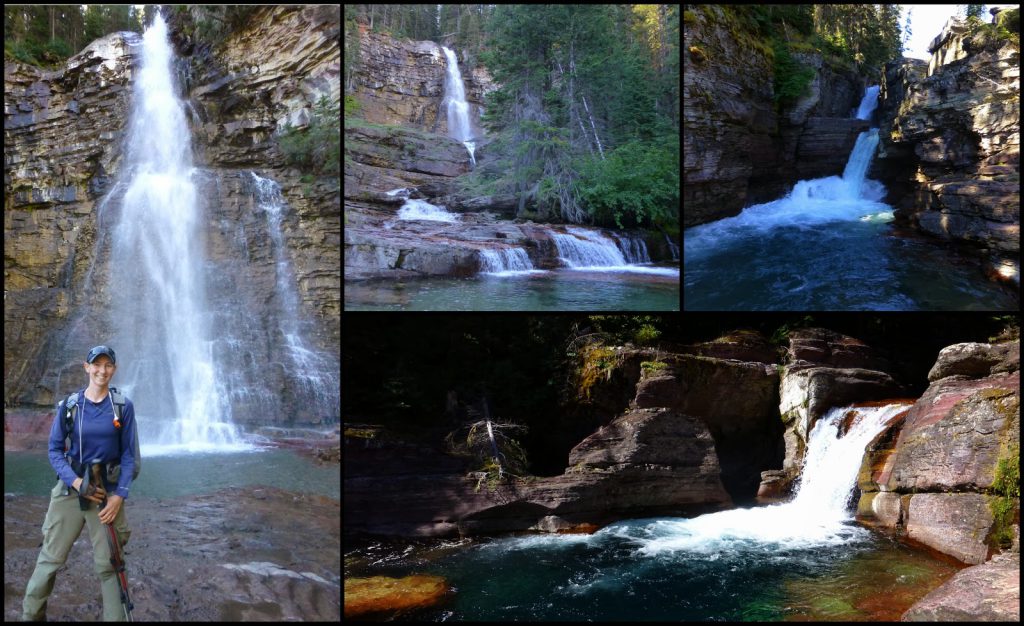 The trail followed St Mary Lake, and there were open views from time to time that were nice. 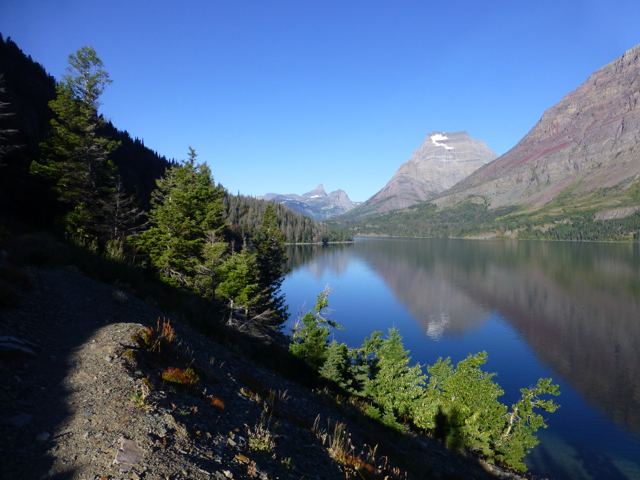 The good stuff started after the brush ended. There was a stretch with a lot of waterfalls and a TON of day hikers. I was swimming against the grain as most day hikers were just making their way up the trail when I hiked through. 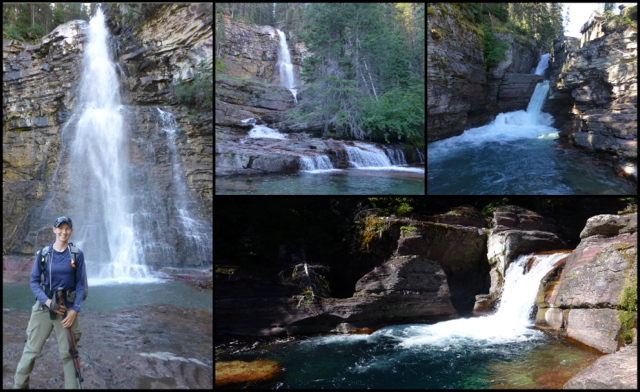 I met a couple, Carol and John who were staying at a motel across from my campsite. They said I could use their wifi to post the last few days’ blogs and that was my main motivation for the day. The faster I hiked, the sooner I could get to camp and get wifi! Just before lunch, Bloodbath and Rampage caught up to me and we had lunch together. There was a climb after lunch and they were moving fast, so I told them I’d probably just fall back and see them at camp. The climb we did was up and over Piegan Pass. It was great!

At the top is a huge rock formation called the garden wall and a man was nice enough to take my picture. I have run down the battery on my camera and had to use my iPhone the second half of the day for photos, but they are okay. 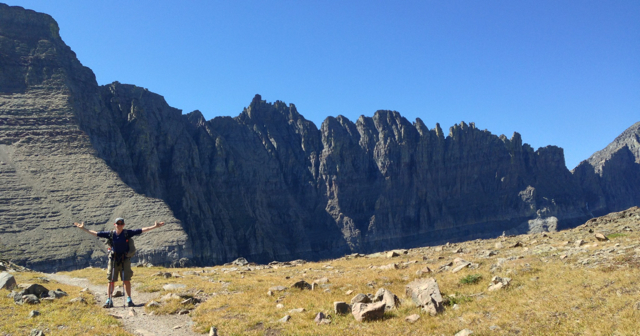 I tend to do downhill faster, so I caught up to Bloodbath and Rampage and passed them. They were going to do an alternate at the end of the day that was shorter and possibly more scenic, but I wanted to stick to the trail and see the Many Glacier Hotel, which I’d heard was worth seeing. We knew we’d find each other at the campground. When I got to the hotel, the view they had overlooking Swiftcurrent Lake was pretty amazing!

As I passed by the hotel I noticed they had wifi and tried to connect, but it required a guest only password, so I kept walking toward the campground. Not far from the hotel, a car pulled over and a guy got out and asked if I was Wired! He and his wife have been following the blog and plan to do the PCT next year. They drove me back to the hotel because they were staying there and had the wifi login. It wasn’t working for some reason, but Janel and Alan treated me to my favorite of strawberry lemonade and chocolate milk! What a way to end a big day! Thank you Janel and Alan! 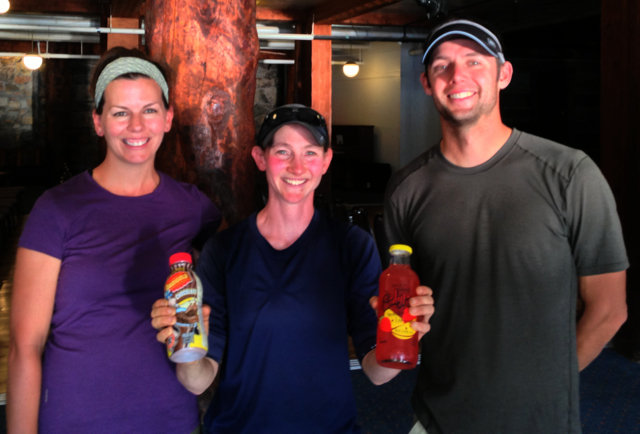 Then I hiked a bit further to the campground. This one was a major campground just off the road and not a backcountry site. I walked towards our site and spotted Bloodbath and Rampage at a different site…eating a nice dinner…with Kathleen(Dain’s mom)! Kathleen is waiting for Dain to finish a couple days after us and knew we’d be here, so she got a site near ours and made fresh salad and spaghetti with chicken and meat…my favorite! Plus, she got me a chocolate milk too! What a great surprise! I just love the hiking community! 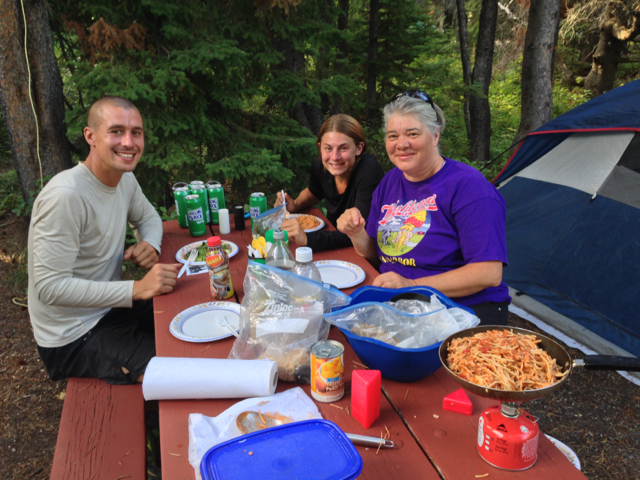 We all ate dinner together and then I went to set up my tent before heading across the street to find Carol and John at the motel with wifi. They weren’t there, but the person at the desk was nice enough to let me sit in the lobby and use the wifi to load the blogs, yay! I bought a couple of snacks from the attached shop and while I was in line, the guy behind me asked if I was Wired! It was the guy who had given Joe and Tom(cycling twins) a ride to E Glacier the day I was leaving when they spotted me on the street and said hi. What a wonderfully small world! While I was blogging, Carol and John showed up and we talked. They live near the start of the Appalachian Trail and offered to help get me to the start when I do the trail. How perfect is that!? Finishing the CDT and already arranging a ride to start the AT. Seems like fate to me… 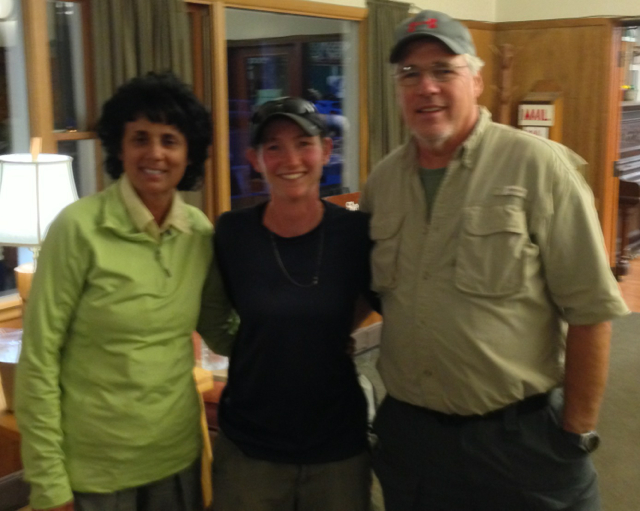 What a great day! Only two days left and I’ll get the posts up by the evening of the 3rd when I finish. We plan to finish before noon on the 3rd and I’ll press my SPOT at the end, YIPPEE!!!