Today was our final day on trail! We decided that we’d get a relaxed start at 7:30am and I was very thankful for that. I was not feeling well at all as I was having strong exhaustion from my period…I know, great timing, right. In the video below and the pictures here, you’ll see I look pretty wiped out and there was just nothing I could do about that. It had nothing to do with the trail and my overall energy due to hiking 134 days, it was just really shit timing. I’ll apologize now for the lack of reflection in yesterday’s post and today’s. I’m just so tired that my brain doesn’t seem to be processing it more than the fact that I don’t have to hike anymore when I’m this worn out. It just hasn’t hit me yet I guess.
It was great to have Bloodbath and Rampage with me for a distraction and to have hikers I’ve spent so much time with to share such a culminating moment. It had rained a bit last night and there was a lot of brush over the trail the 7mi we had to the border. At first, we found it really annoying to be in cold wet brush on our last day and then we realized how fitting it was for the CDT. Just one more reminder from the trail that it will always get the last laugh! 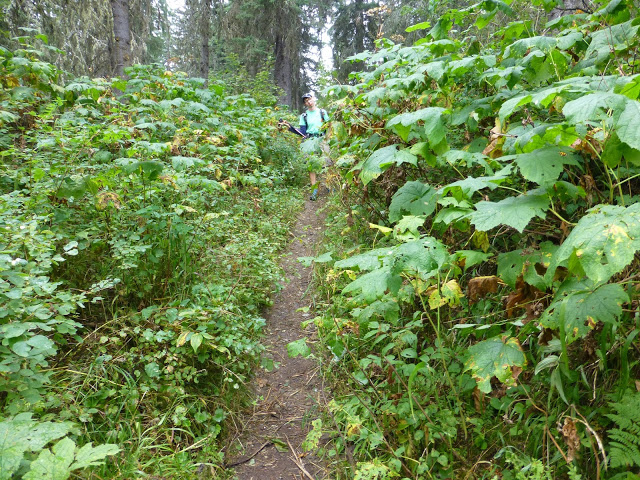 About three miles from the border, we reached Waterton Lake. We knew we were really in the the home stretch then! It was epically perfect! With the overcast skies, the temps and lighting was just perfect! I’ve had a picture of the dock at Waterton (from 2012 CDTer Swami) as the screensaver on my phone for many months for motivation and now I’ll be changing it to the one below. This is where it really hit me that this was happening and that we were completing the CDT! 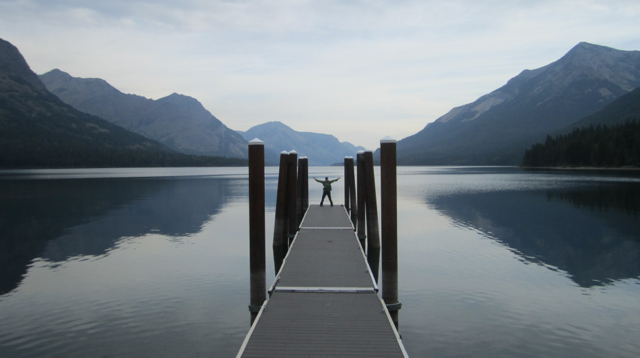 I was taking video throughout the morning (embedded below) and we started videoing just before the border. As we neared the border, we could see a ferry in the lake. Some of the people saw us and were taking pictures as the announcer on the boat was giving the tour. When we hit the monument, we were elated and hooted and yelled out to the ferry that we had come from Mexico. Then the whole crowd on the boat cheered, clapped, and took pictures of us! That was quite a moment for us that we didn’t expect as no one else was around and it was just the most amazing timing. We stayed at the border for about an hour doing finishing photos and taking it in. It even drizzled on and off and we hardly noticed with how elated we were! A hiker came by and we were even able to get a group shot. 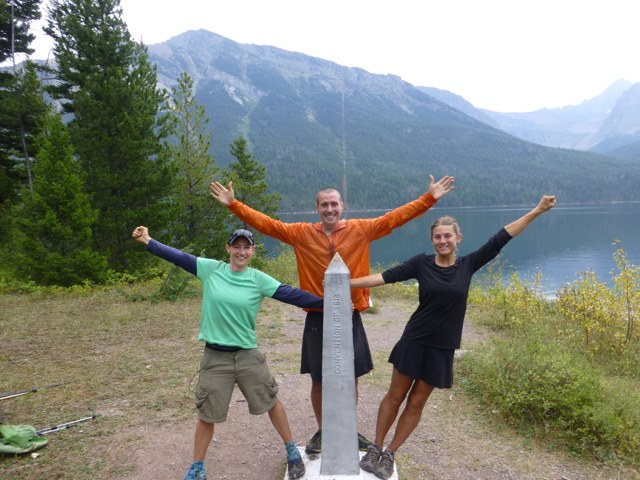 I have a TON of photos from the finish and won’t put them all here, but they will be in my slideshow I’ll get up in the next couple days. One thing I do want to point out is that there were two monuments there. They both mention a peace treaty. They signify the first international peace treaty between two national parks back in the 1930s. The two parks are Glacier National Park in the US and Waterton Park in Canada. Pretty cool. 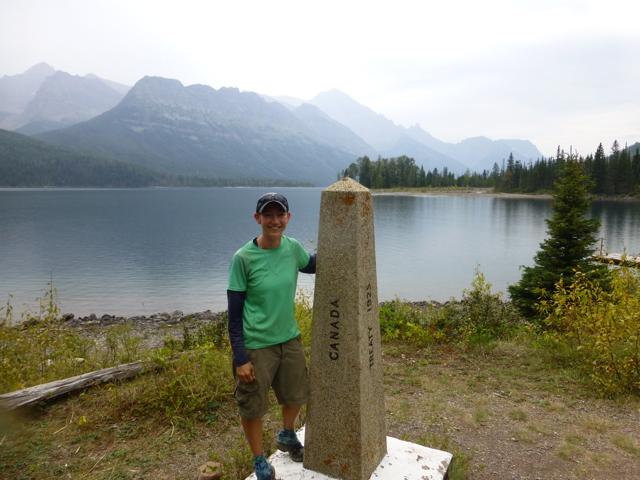 Rampage and I were pretty proud to be the first gals to finish this year. I think there have been five guys who have finished ahead of us. Stopwatch reached the border about five days ago, but has a couple hundred miles to complete in Colorado that was closed due to fire. She will probably complete the trail in less days for those of you wondering about the details. I was pretty stoked to have done the trail 13 days faster than I did the PCT and I hiked about 200mi more on the CDT than the PCT. I only took 7 zeros, so that gave me an average of 21.3mi/day with the zeros and 22.4mi/day not counting the zeros. I’ll have more stats to come in a future post. Here is a picture of me and Rampage in all our girl power pride! Notice how the border can be seen cut through the trees on the hill to the left. 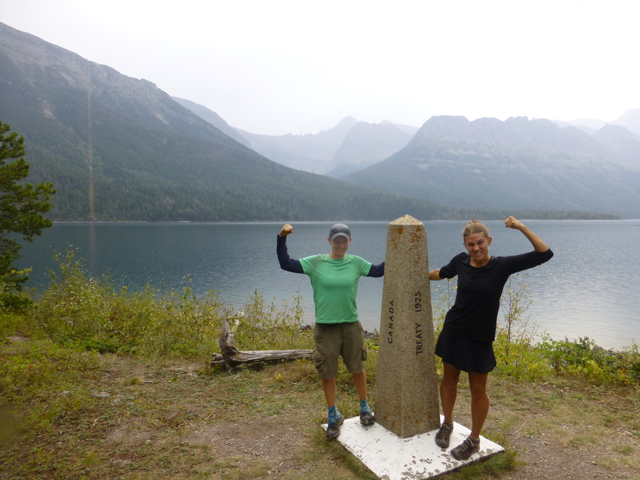 I mentioned awhile back that I had reasons for wanting to finish with Bloodbath and Rampage that I couldn’t reveal as there was a surprise coming at the border…well, back in Wyoming, Bloodbath had told me his plan to propose at the border. As the date neared and it looked like we could overlap, I decided that it would be worth adjusting my schedule to finish with them and document this moment for them. The plan was executed perfectly! We spent a lot of time at the border taking border pictures and all along, the plan was that I would take an ending video for Bloodbath and Rampage to have. Rampage thought they were just doing a final video to capture their finish and Bloodbath took the opportunity to propose while she wasn’t expecting it. The best part is that I was able to get the whole thing on video. It is posted below and is really quite a great proposal. Well done Bloodbath and congrats to both of them! It was great to be able to witness such a touching moment and document it for them! 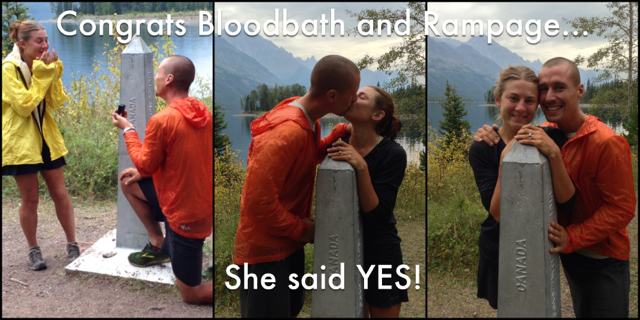 Along the way to the border, I had plans to hopefully see a friend of
mine going southbound for a short trip. Her name is 12oz and she also
did the PCT in 2011. Her plan was to hike southbound for a few days and
congratulate all of us she knew finishing. She was going to bring me a
chocolate milk for the border, but we didn’t see her before we got to
the border. We weren’t sure how we missed her, but, I still ended up enjoying my Oreos while Bloodbath and Rampage had their whiskey. 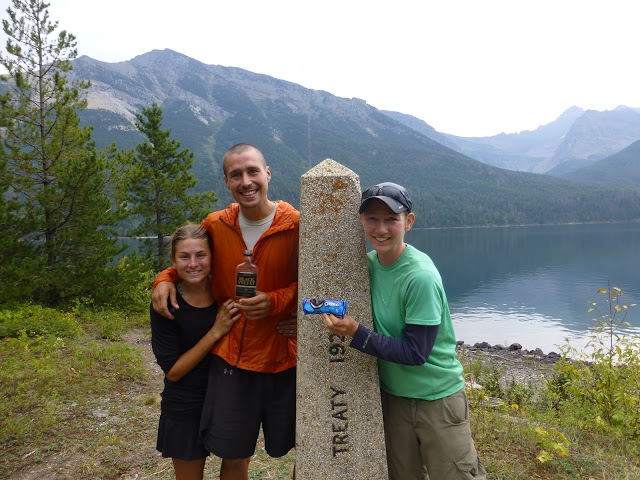 After all the celebrating, we hiked 4 more miles to the town of Waterton in Canada. When we got to town, I went to the post office to get a congratulatory package from a blog follower named Doug. Doug sent me a guide book on the remote CDT that continues on through Canada, some postcards, and a Canadian $20 bill to treat myself to a finishing meal! I immediately found some chocolate ice cream and my two favorite Subway sandwiches. So awesome! THANK YOU Doug!!! 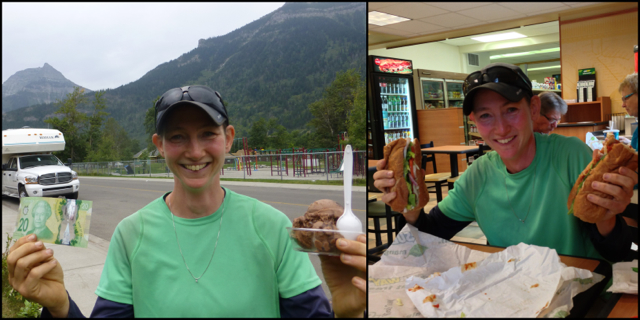 While at the post office, some tourists from the ferry recognized us and we hoped they had pictures of us finishing taken from the ferry. They didn’t, but spread word through the small town that anyone with a photo should come to Subway so we could get the pictures. We were lucky and someone did come by and will be emailing me the photos in the next couple of days! Our plan to get back to the US was to meet Bloodbath’s friend, Chili Dog, at Subway and he was going to drive us back to E Glacier where his girlfriend Seahorse was waiting. They are going to spend some days with Bloodbath and Rampage experiencing Glacier more.  Well, it turned out that Chili Dog wasn’t able to get into Canada because he had forgotten his passport. He was waiting for us at the Chief Mountain border crossing. As luck would have it, 12oz walked up (her plans had changed and she was no longer backpacking southbound) and was able to drive us to the border and me to E Glacier! When asked how she found us in town, she said she knew to go to where the wifi was! She was exactly right as we had found the one wifi that was working at a cafe and were just posting our finishing photos when she arrived! She even had my chocolate milk! Better late than never! Here we are with 12oz. 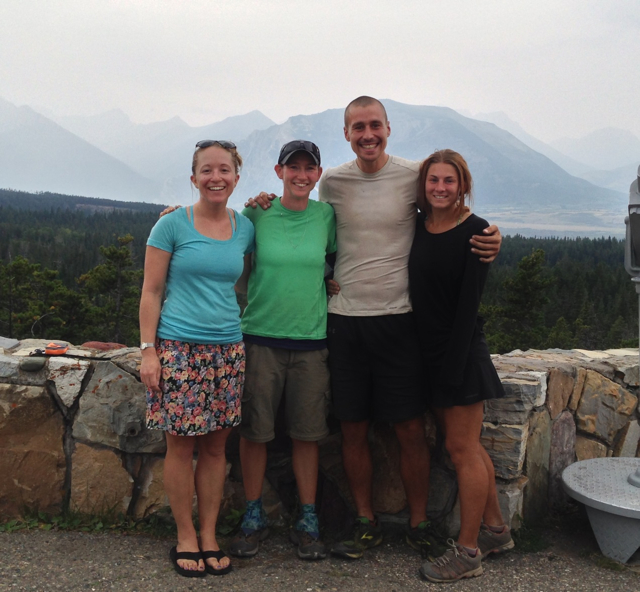 By the time we got to E Glacier, it was after 5pm. The plan was to go out for a celebratory dinner, so we showered and headed to a place in town. It turned out that four other hikers were in town that would soon be heading north to finish and one hiker was in town that had already finished. It was really great to be with the hiker community one last time! 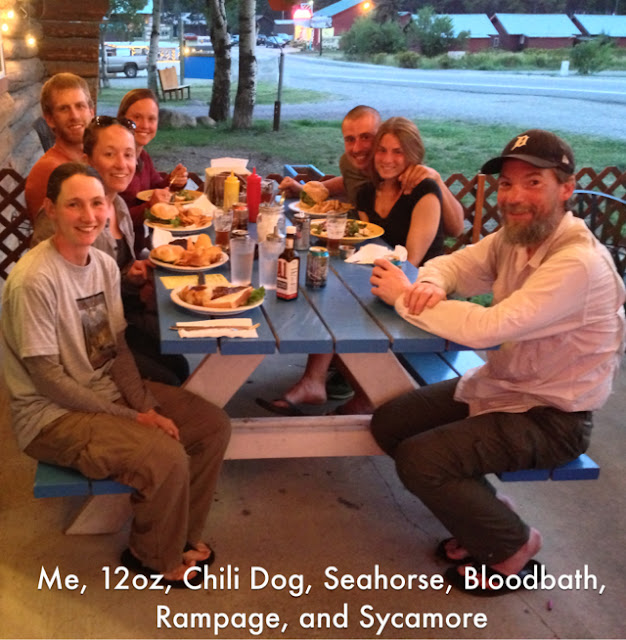 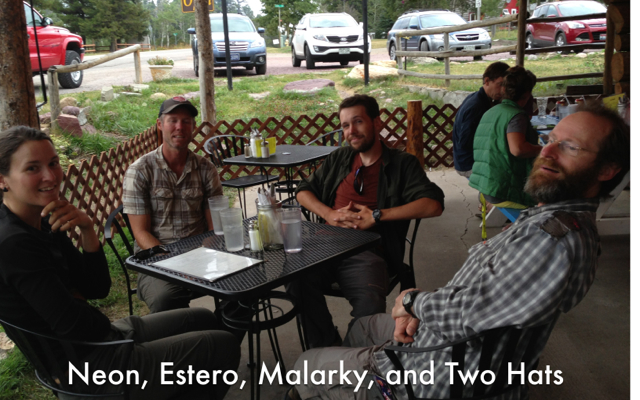 I was set on having a steak for my finishing meal. I rarely have steak and hardly ever have the stomach to eat it all. I even got a chocolate milk and a brownie sundae and was able to eat all of it! Bloodbath and Rampage couldn’t resist the brownie sundae either. It was great to see Two Hats again. He is my lucky charm as he was at my finishing meal when I finished the PCT in Manning Park, so it was just fitting that he be there for my meal tonight. He is officially a triple crowner, so congrats to Two Hats! 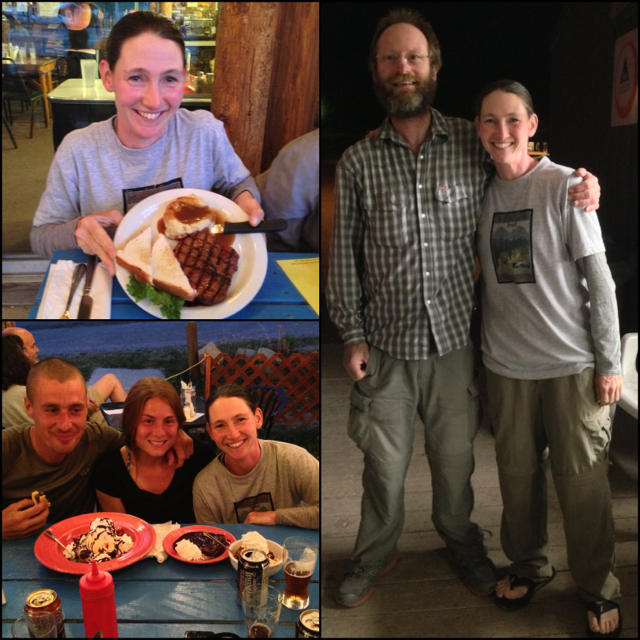 It is now 1:45am and I just got the videos loaded from today as I didn’t want to do the final post without them! Below is the final day video and Bloodbath’s proposal video. Both are just great and I hope you all enjoy them.
Final Day On The CDT

I am headed onto a train tomorrow morning that will take me to Chicago where I will visit my twin sister, her husband, and my nephews for a week (and go to the Bears home opener!) before returning home to Portland, OR. I will get my final slideshow and videos up in the next couple of days and plan to do more posts on gear, my reflections, and my advice for those of you thinking about doing the CDT. It may not be immediate, but it will come in the next couple of months. I plan to do presentations about my hike in the Portland area and will post details on those as they are booked. As a side note, I am looking for a room to rent in SE Portland (no further east than 40th) if anyone knows of a good deal. If you have any leads, email me with details. Goodbye for now and I hope you all enjoyed this amazing and challenging adventure! Whoo-Hoo!!!