Ahhhh yeah! It’s starting to feel real! I can actually feel the drum roll pulsing in my veins. I can feel the build up to this one and I’m ready. Feeling strong and prepared. My last post was a long post, so I saved a few of the most recent preparations for this post. Here are few more updates before I set off.

TICKS!
There’s wildlife on each trail that people buzz about like rattlesnakes, bears, and cougars. On the AT, there are the dreaded ticks! Apparently ticks are abundant along the Appalachian Trail and many hikers get Lyme Disease which can become serious quite quickly. It’s recommended to cover up as much as possible, do regular body checks, stay out of the grass, and treat clothing with the amazing product permathrin. My friend Why Not hiked the trail last year and passed on information for Insect Shield LLC, a company in North Carolina that sells and treats clothing with permethrin. Their repellency is invisible, odorless, EPA registered, and lasts for 70 launderings. I’ve heard it’s amazing and mosquitoes won’t even land on me! Here is the link to the form if you’re interested in having your clothing treated. They were wonderful to work with! Now it’s just the challenge of wearing pants and long sleeves in all that heat and humidity… 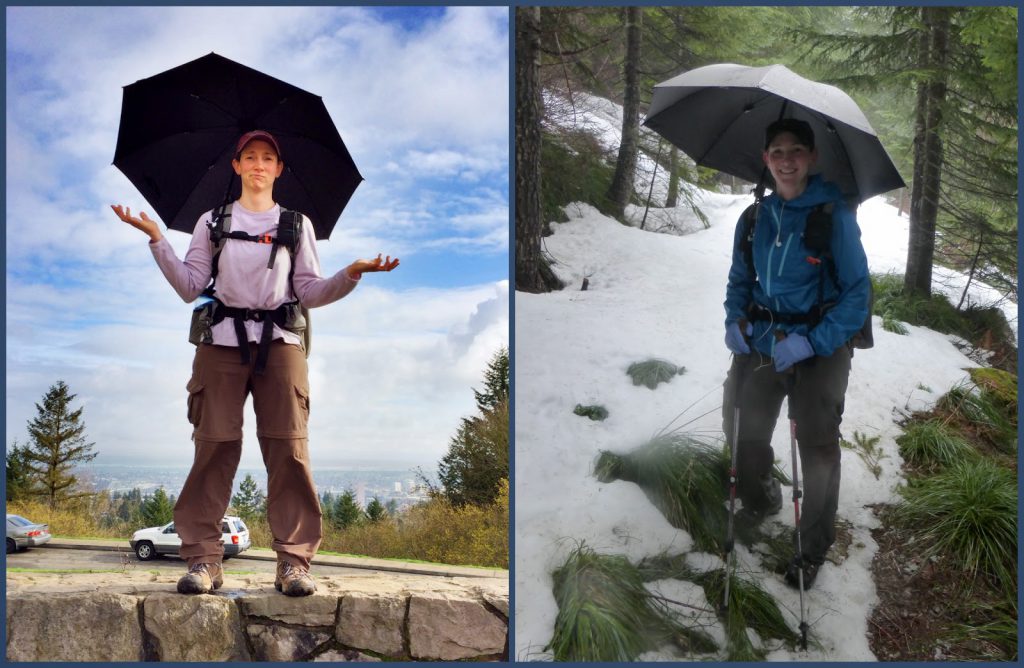 Umbrella
I’ve become a GoLite Chrome Dome fan! GoLite has since gone out of business, so here is the current option for getting this umbrella. I have no idea how I’ve gone this long in the Northwest without a hiking umbrella. I have friends already on the AT this year who say it’s well worth the 8oz of weight. I’ve been practicing with it and even have a hands-free setup that’s working great! Fellow Gossamer Gear Trail Ambassador, Joan West(now on the PCT), came up with the perfect way to rig the umbrella to a pack for hands free use. I’ve found that if you use her rigging and make the bottom loop tight and the upper loop loose, the umbrella centers much better over your head and can be adjusted to the best angle for your situation. Another ultra light rainy tip is to use powder free latex gloves over your gloves in rain to keep them dry. 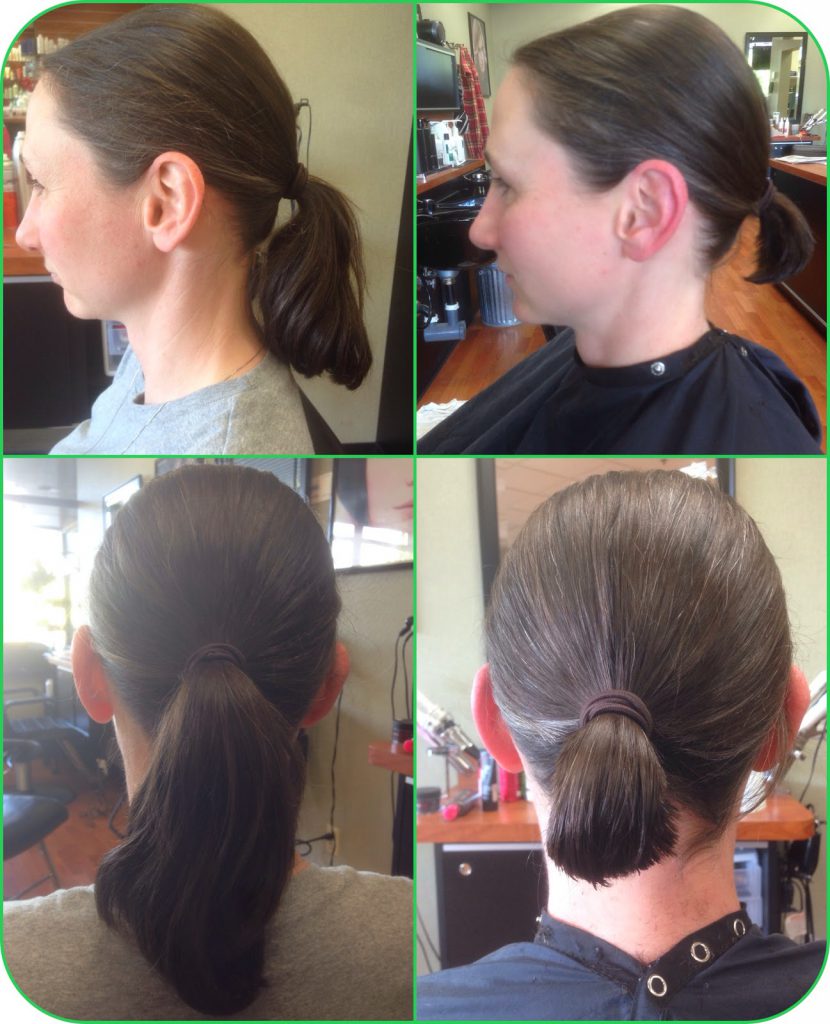 As I usually do, I had my hair cut short to give me less to deal with on trail. I like to have it as short as possible and still be able to pull it back. Mission accomplished. I have developed a gray streak however. I’m choosing to liken it to Bonnie Raitt and a superhero, which I agree are same thing, ha! I have my dad’s genes to thank for this. Maybe now less people will mistake me for a teenager.

Start Details!
I will substitute teach up until I leave on a red eye flight late the night of Tuesday, April 15th. I will fly into Atlanta, GA the morning of the 16th. There I will be picked up by Carol and John, a wonderful couple I met in Glacier at the end of the CDT last summer. I just love how these things work out! They live near Atlanta and offered to pick me up at the airport and shuttle me to the start of the trial. The Appalachian Trail starts at the top of Springer Mtn in northern Georgia. There are two options for starting. One choice is to be dropped off at the top of Springer Mtn. The other option is to do the 9mi Approach Trail that starts at Amicalola Falls State Park. It seems to be 50/50 split of hikers that do the Approach Trail versus those who choose to just start at the top of Springer. I want to hike the Approach Trail. It was once listed in Backpackers Magazine as one of the “Best American Hikes” and am looking forward to seeing the falls. Carol and John use to volunteer at a very popular lodge 5mi in on the approach trail called the Len Foote Hike Inn. They will hike the first half of the approach trail with me and we’ll stay the night at the Hike Inn where there are showers and family style meals that are plentiful. I’ll officially start the Appalachian Trail on April 17th after a hearty breakfast and four miles on the Approach Trail. I’ll be heading out solo and chose mid-week to avoid crowds, but I’m sure there will still be plenty of people around to take my official starting photo atop Springer Mtn. So far, the weather for my start looks great as it will be sunny and 60s. SO PUMPED!!!

Training
I’ve still been training each Sunday on long hikes and the shorter ones after work if I get an open night. Here are slides from a couple of those hikes. Here are two of my favs from the past week…
During my last long hike in the Gorge. I turned a corner to see this as the sun tried to break through a thick fog. Took my breath away! 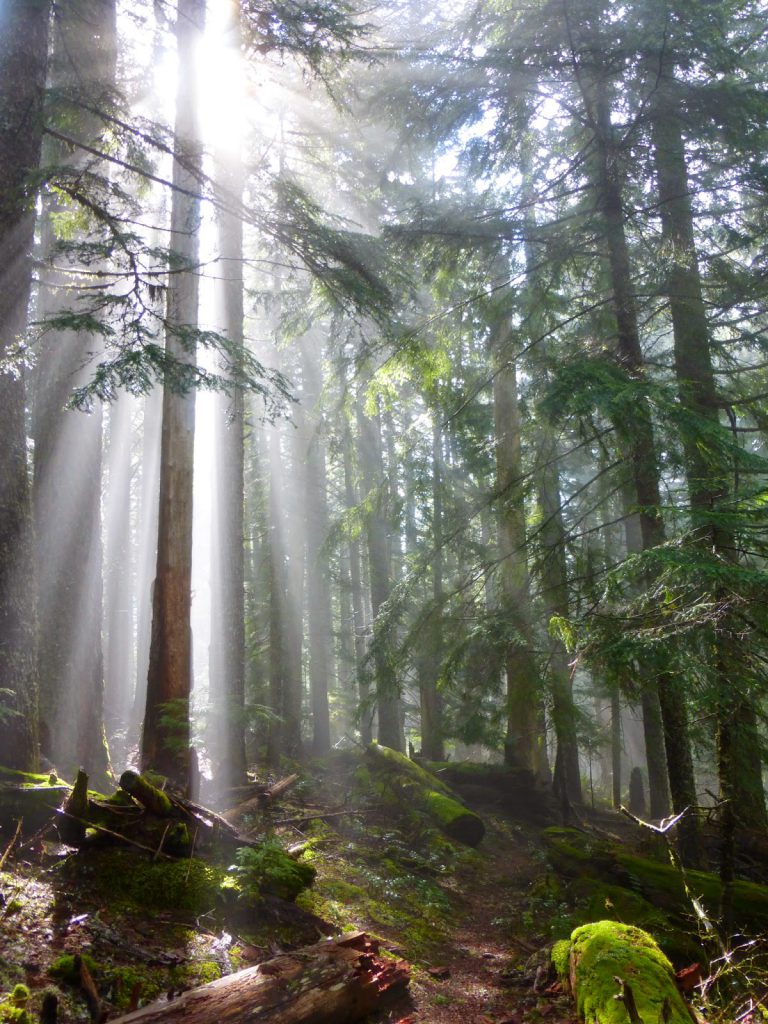 For my final training hike, I did the most challenging hike with the most weight! I took the three kids I nanny (7, almost 4, 16mo) on a hike. 2mi to Wahclella Falls in the Gorge. Exhausting, but so worth it! Good times:) I’m going to miss all the families I spend time with that have become my family here! 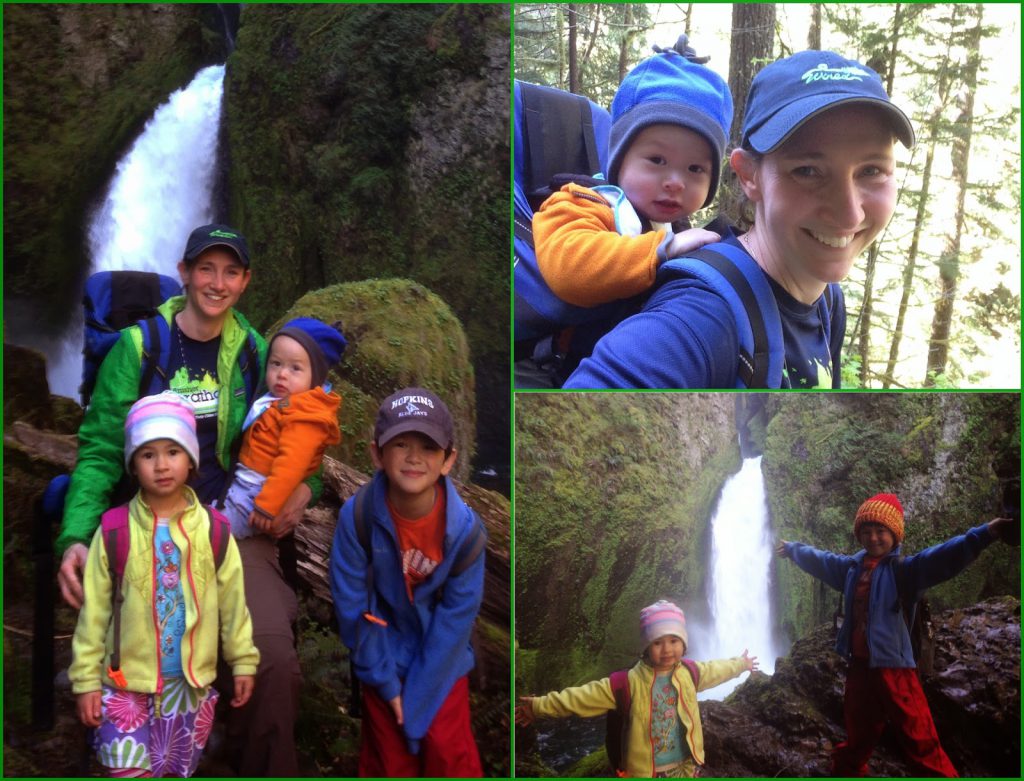 Here are slides from two of my training hikes. Again, if you’re on a smartphone or getting this through email, you’ll want to go to the blog for the slideshows to appear.

Oregon Coast Trail 37mi overnight from Nehalem Bay to Seaside on a SUNNY weekend with Fellow Gossamer Gear Trail Ambassador Allgood. Friends Drop-N-Roll and Bridget each joined for a day too:)

Tanner Butte, a 17mi round trip hike. It goes up 4,500ft in 8.5mi. A day socked in by fog and rain, but some amazing mystical scenes on the way down.