I’m making an effort not to set an alarm on this trip. I tend to wake up around 6am naturally when I’m on the trail and today was no different. No one was stirring around me. Most who do the AT do not get going as early as I like to. As I was taking my tent down Harley walked up and said hi. He mentioned he’s a morning person so I wasn’t surprised and told him I’d see him later today. It was nice to see someone with the same general hiking style so early on in this hike. I was on trail by 7am and it was nice and in the 40s. It wasn’t long before I was comfortably hiking with no jacket. The views through the trees were nice and it was enjoyable morning hiking.

The climb of the day was up to Blood Mtn, the highest point so far at 4,458ft. It’s wasn’t as steep and exhausting as I had expected from what many described. It would go up for a bit and then roll back down just to climb again. It wasn’t a lot of elevation to the top, but it was the up and down that made it more. Some of it was steep, but then it would level out and give me a break before climbing again, so it wasn’t too grueling. I saw a lot more thrus today. I’d think around 15, but it’s Easter weekend and I saw lots of people and it can be hard to distinguish thrus, section hikers, and weekenders. It was nice to see families out. The pair I saw most today was a dad and his daughter (12yrs old). He had done the trail in 1994 and was doing day hike sections with his daughter this weekend. We walked about an hour together before the real climb started and then saw each other up top and on the way down. Others today were like a blur to me. No Harley though. I just can’t absorb the names with so many around, but everyone is really nice. I think it’s overwhelming for everyone so it’s usually a quick hello as we briefly overlap for a minute or two. As I ascended, the talk from everyone was that rain was on its way after lunch. Once I heard that I just got in a zone and moved quick to the top. I was there about 5mins when it started to rain. I was happy that I got the picture of the view at least. 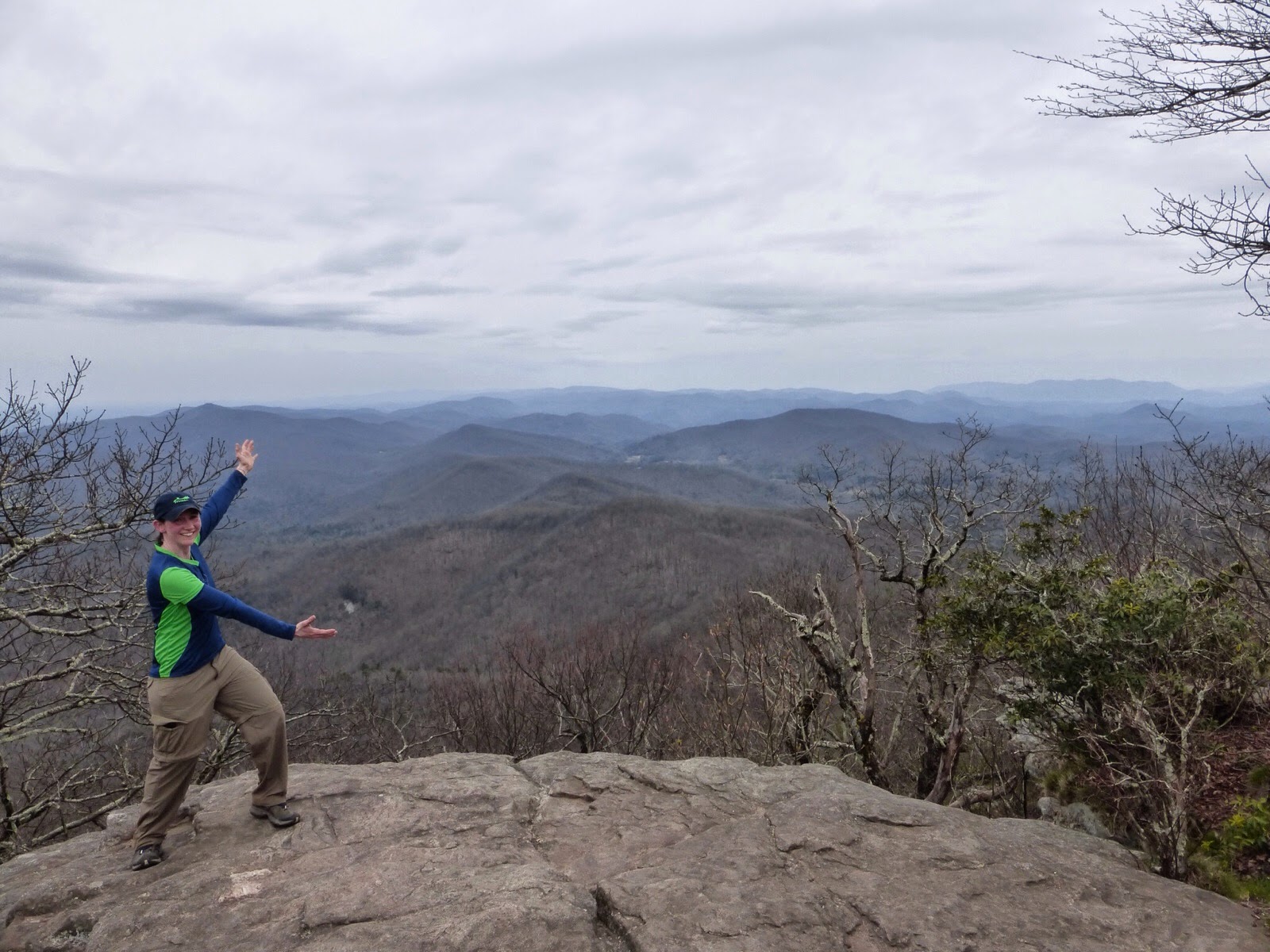 There was a shelter up there and I got to relax and have lunch in there as people came and went. The rain was faint, but enough that it gave me a chance to whip out the umbrella. I just love it! It rained lightly the next two miles down some rocky trail and I arrived at Neel’s Gap.

There are “gaps” everywhere here and I’ve concluded that they are dips, like a saddle between peaks…I guess. Sometimes roads run through a gap and that’s the case for Neel’s Gap. The trail literally goes though a walkway of the building there that is an outfitter. Here’s a picture of where hikers walk. Notice the zillion shoes hanging in the tree. 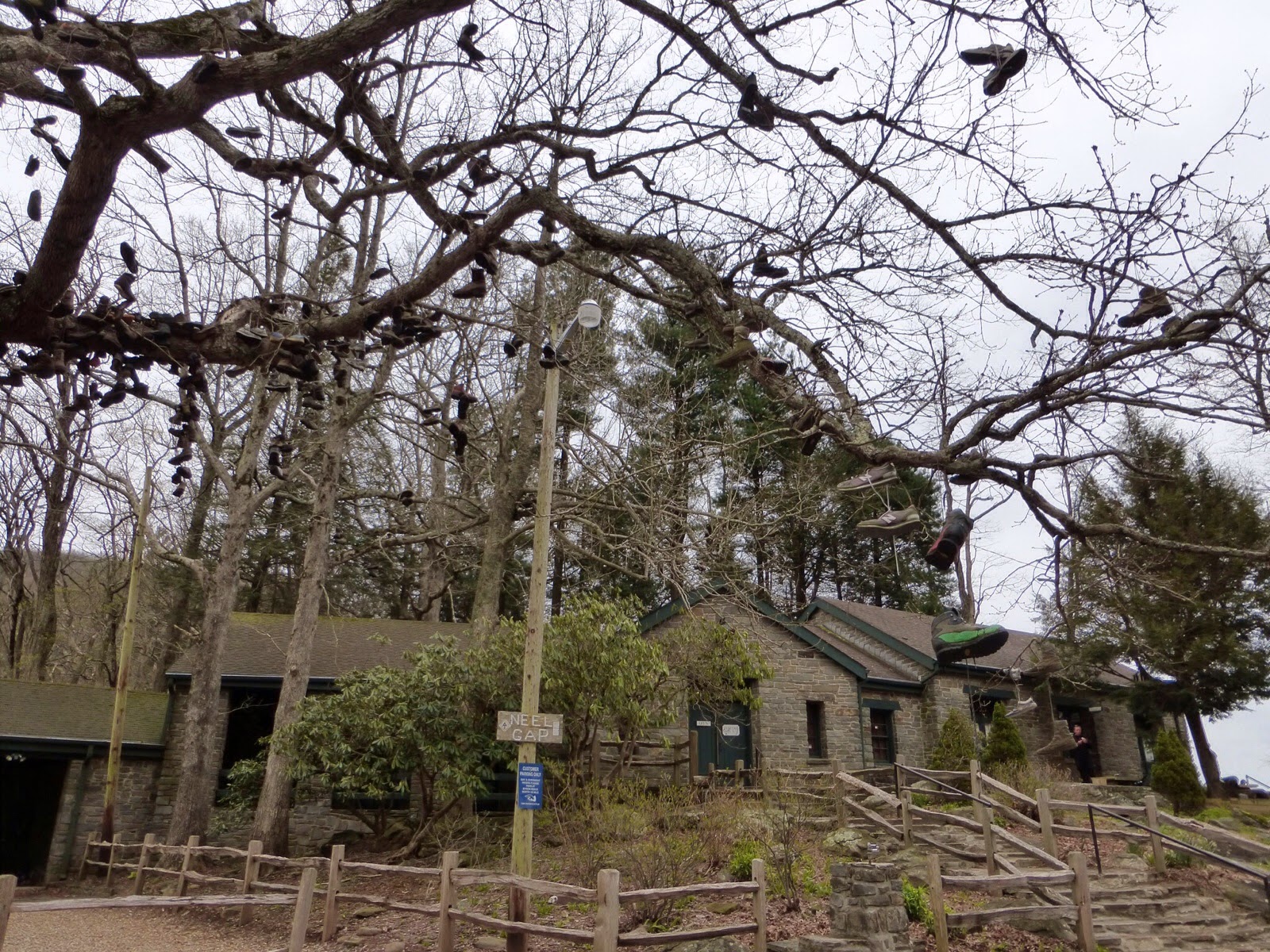 It was still not raining very hard and my thought was that I could make it another 7mi to a spot that had a shelter, camping, and water. There were a few options to stop before that so I just decided to see where I was at 6pm. As I hiked the next couple hours, the wind picked up and rain got harder. 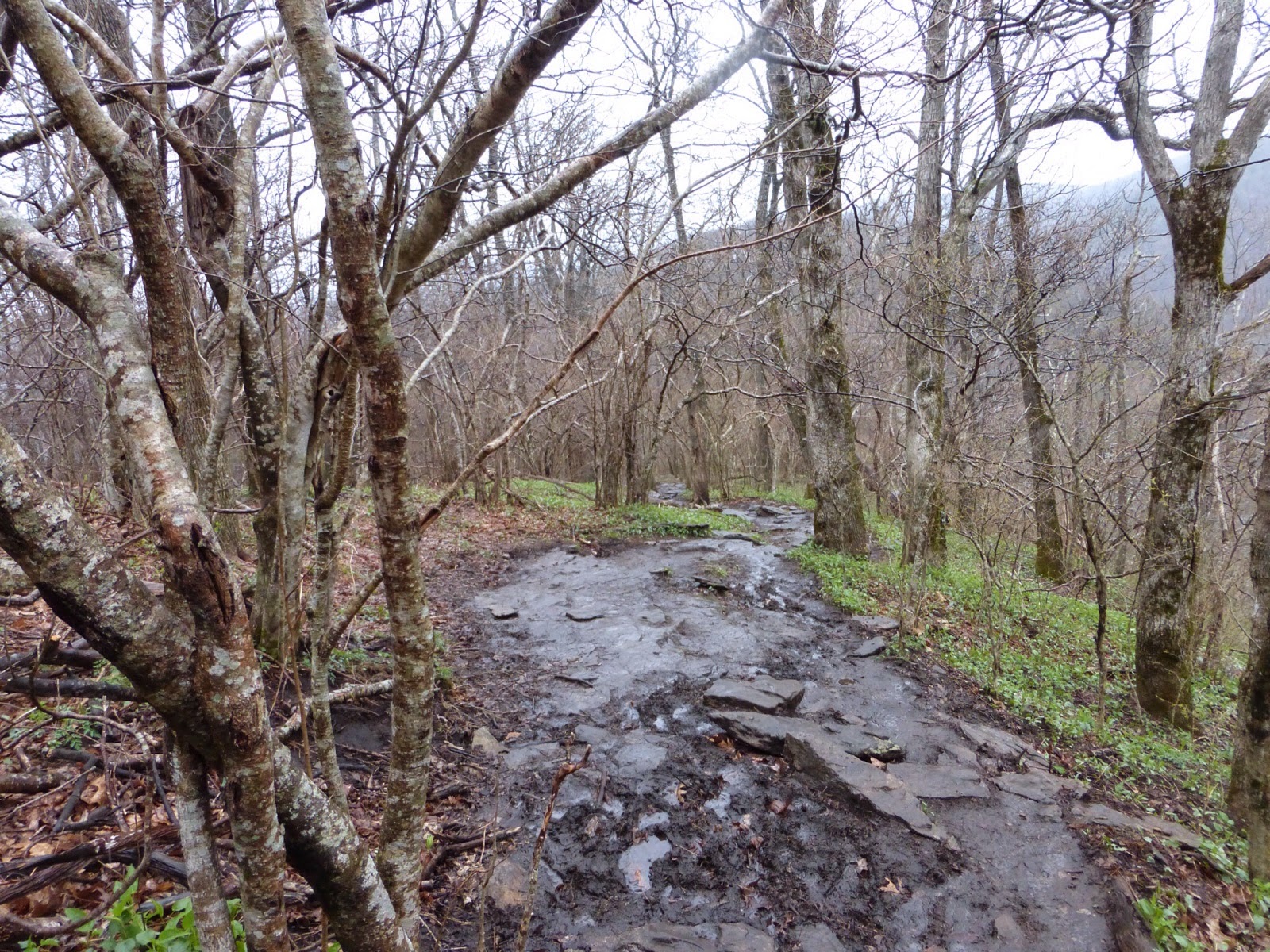 I decided that I wanted to pick a lower elevation site that was more sheltered from the wind if possible because this rain wasn’t going anywhere. The shelter only holds six and I was sure tons headed there in hopes of a spot and that camping would be limited by the time I got there. Plus, I imagined the wind being really strong up there. I hike and came across a parking lot just off the little traveled highway and figured it was the best I’d get. It was 6pm and I knew the rain would make set up more time consuming, so I stopped. I try to avoid camping in these spots, but it was the best option and the guys there were nice. Two of the guys, Jerome and Chris, were doing a short section and they were using hammocks. They found a creative way to hang them above each other like hammock bunk beds. The other guy said I could pitch next to him because he was getting picked up soon. He had been waiting since 2pm for his wife who got stuck in holiday traffic and then lost. He’s not comfortable and happy to be leaving, but thought his wife was coming hours ago (it’s now 9:30pm), so just sitting under his rain fly cold and hungry. Here’s how it looks. 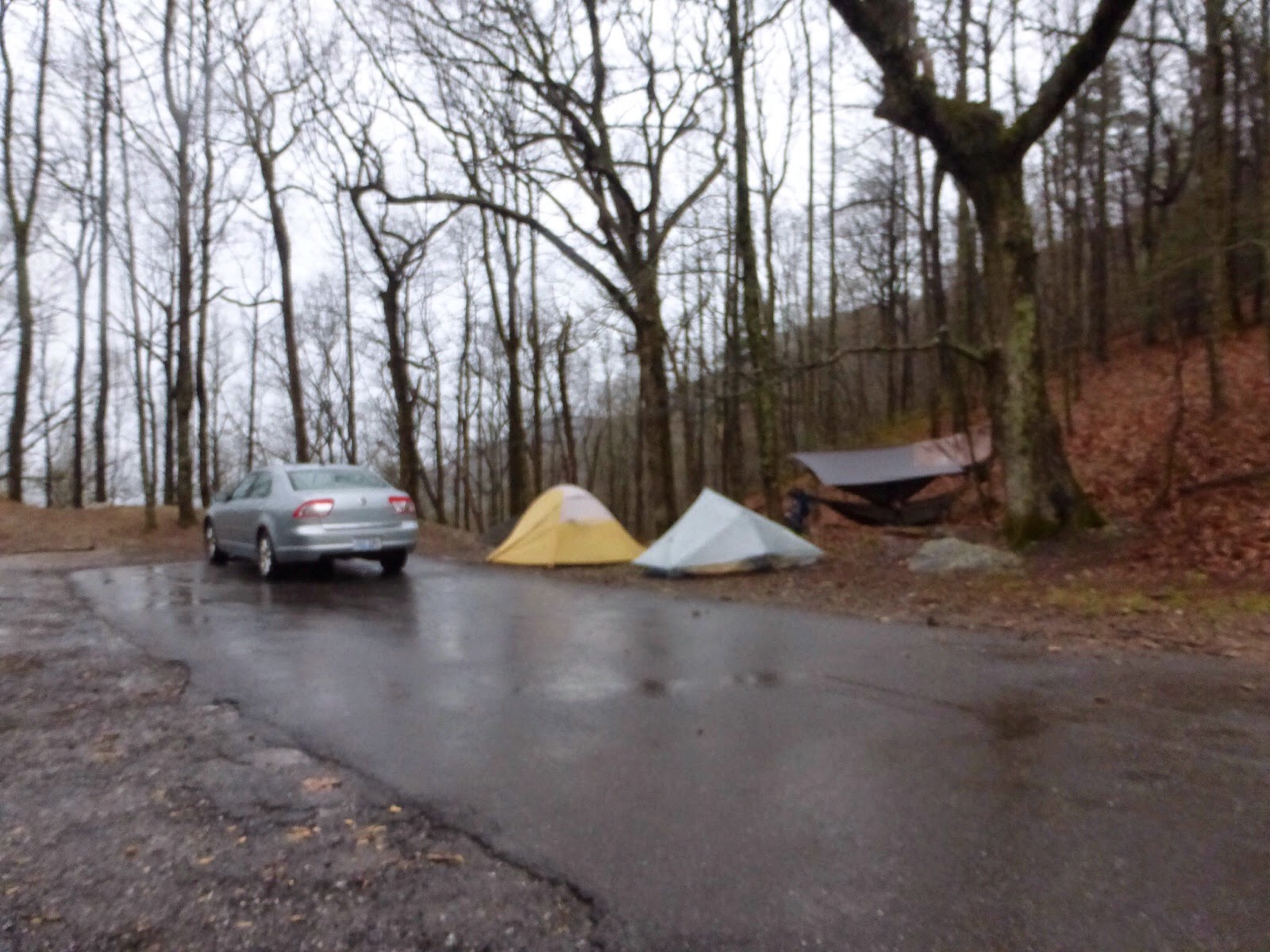 It is soo tempting just to hitch into town. This is classic Appalachian Trail and totally what I expected. Only my second day and it’s raining…a lot. I should have practiced the set up of my new ZPacks Soloplex tent more because it took me awhile with the muddy gravel I had to work with and pouring rain. I was stoked that I was pretty dry! The hands free umbrella setup is great. I used it while I setup the tent and it was wonderful! I figure this is a great opportunity to test out the new Soloplex tent and if I’m wet in the morning, I could hitch into town. It’s not supposed to stop until halfway through the day tomorrow. I stubbornly want to gut through it and learn from it. We’ll see in the morning.

The problem is that it’s gusty from time to time and somehow the splash of the rain in the puddles around my tent mixed with a wind gust every so often is causing mist to come up into the mesh of the tent at times. I’ve decided to prevent this as much as possible by propping the umbrella in the doorway and my backpack, sit pad, and rain jacket a long the other side of the tent. Here is a photo. It seems to be doing the trick quite well. 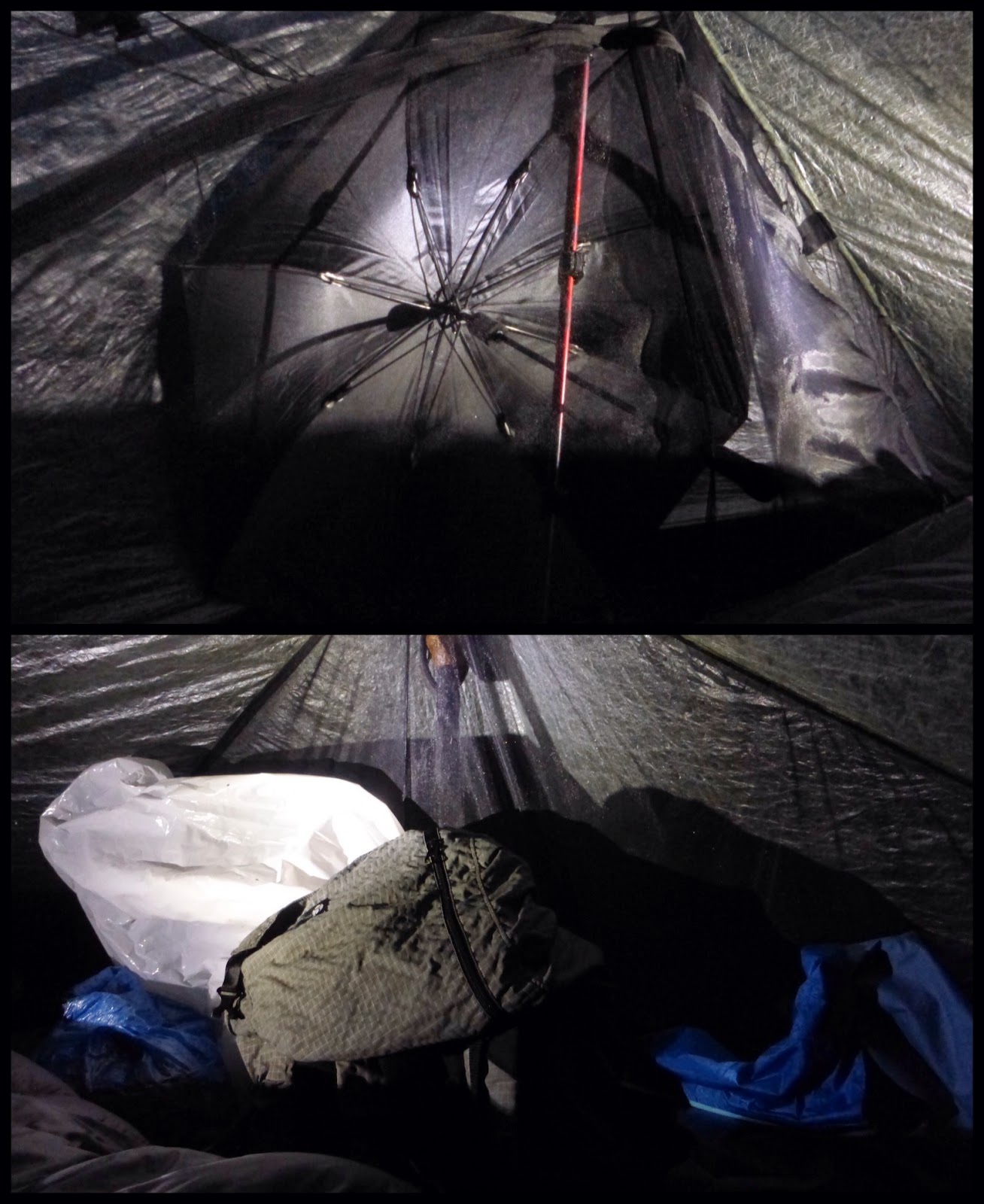 The guy next to me has had some classic one liners about his wife and this whole situation and I’m fully entertained! His sarcasm and wit reminds me of my brother and is cracking me up! I seriously haven’t laughed this much in awhile. Two hours ago his wife said she’d be here in 30mins. He’s pissed, but very humorous about it. Remember he got here at 2pm today. She just drove up and he has mentioned once again the blow job she owes him for this. I’m not doing this justice, but it’s classic!

So I was able to do all my cooking and housekeeping from the tent and there is no way I’m leaving this tent. The funny guy gave me his extra Ziplocs which I’m using to pee into and then put outside the tent. Ladies, you’re welcome for that wonderful tip! The rain actually sounds good, so I hope I sleep well.