Lots happened today so I’ll try to summarize it best I can. It was gusty and raining the whole night. At 4:15am, I heard my hammocked buddies, Jerome and Chris moving around and talking. I asked if they were actually packing up so early (and in the rain) and they said no, but that one of them was completely soaked. They wanted me to tell all my blog followers that the lesson is to not use one tarp for two hammocks! I waited for the rain to show some slowing and packed up reluctantly to hike in the rain. Temps were still in the low 40s. Given the combination of wind gusts, horizontal rain, and my poor tent setup, I faired quite well. My barricade of sorts kept the water out and I was surprised that most things were dry. Jerome and Chris decided to cut their trip short and called for a ride that was coming. It was tempting to go into town, but I wanted to prove to myself that I could do it so that when a true situation came up in which I couldn’t stick a thumb out, I’d know I could do it. I packed everything while in my tent and attached the umbrella to my pack, so I was able to somewhat enjoyably take the tent down in the rain and then shove it in a side pocket. I was hiking an hour later than usual just before 8am and waved goodbye to J&C who were good sports and welcomed company in a crappy situation. Thanks guys! 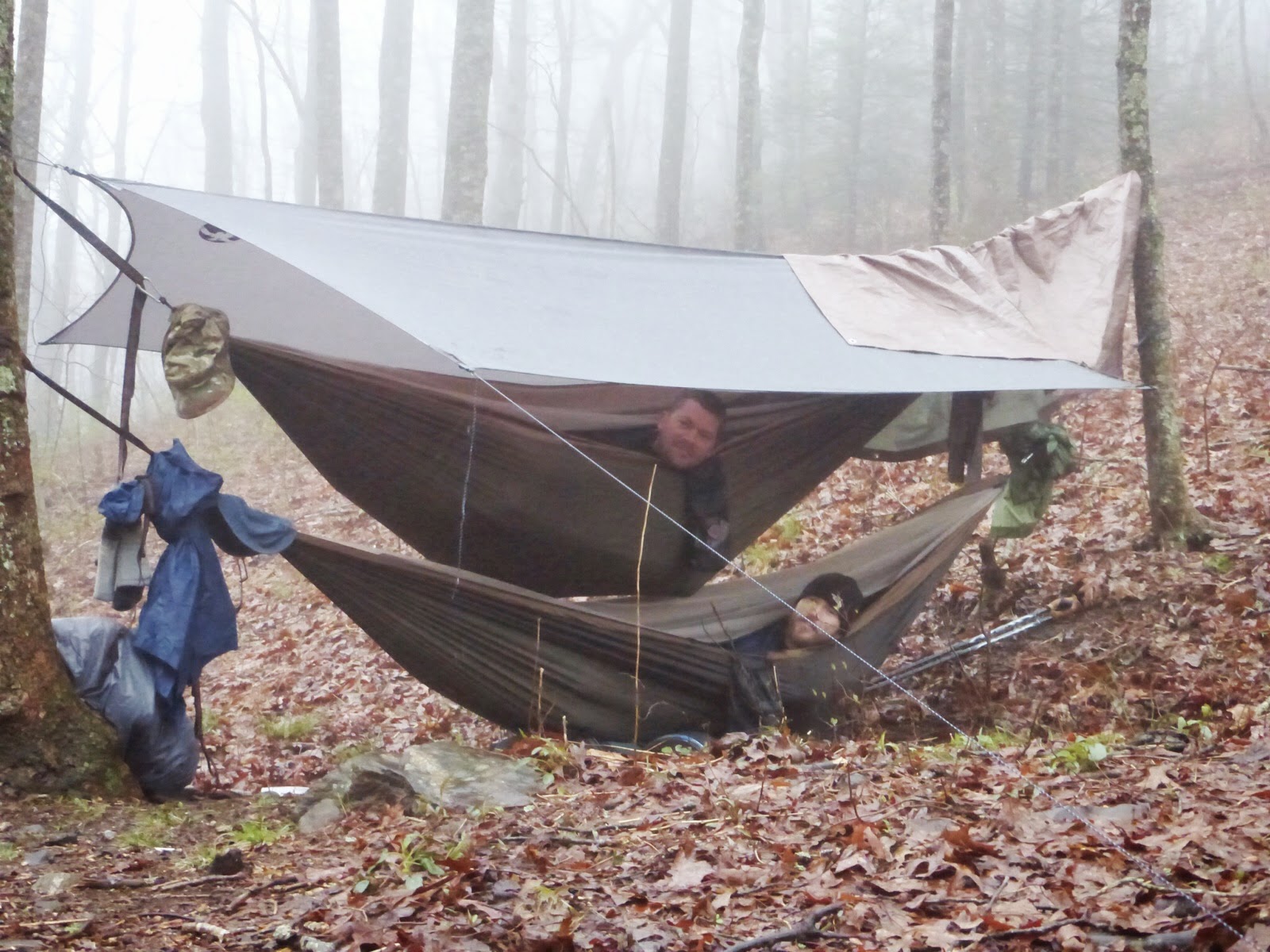 I immediately hiked uphill into dense fog and could feel that I needed more fuel. I had eaten some almonds as I packed up in the tent, but I knew it hadn’t been enough. Those who have followed me before know that I have a tough time eating when I’m stressed physically or emotionally and sometimes have trouble keeping breakfast down. I was definitely not comfortable this morning and didn’t want to eat. I tried to force down more almonds on a downhill and activated my morning sensitive gag reflex. The saliva rushed to my mouth and I mentally told myself to hold it in as I didn’t want to lose the little I had managed to eat this morning. The effort was fruitless and I immediately lost all my water and almonds from this morning, ugh! Then just a few yards later half of dinner, crap! This is not uncommon for me on train and I was so frustrated. I waited 20mins and was able to get an Odwalla bar down. I need to figure out this morning eating issue. The almonds seem to be too dry so I’m thinking of doing the bars first, especially if I’m stressed. So annoying. Anyway, the rain stopped within 30mins or so of hiking and the fog was thick. 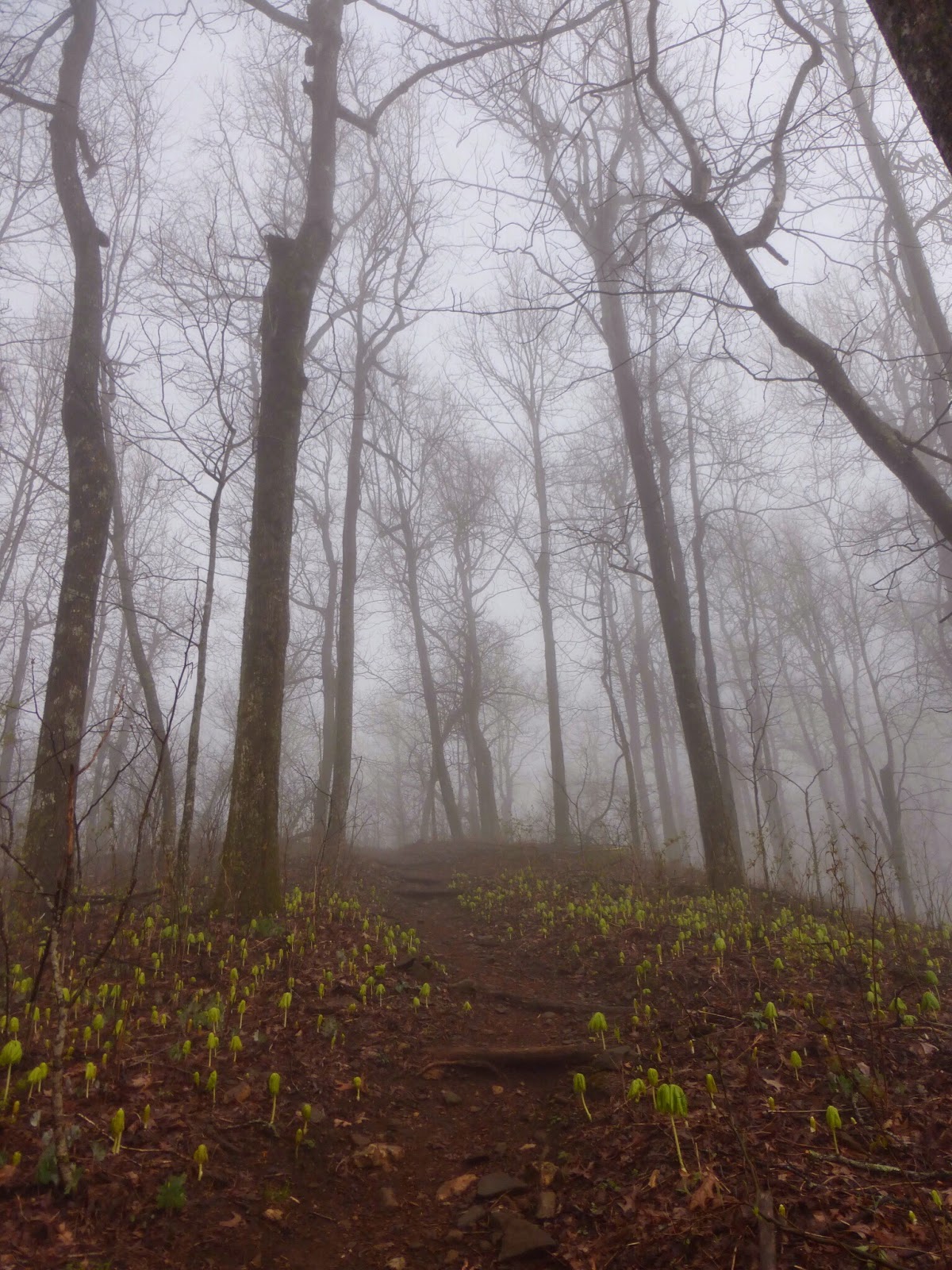 It lifted within an hour and rolled in and out. There were nice views through the trees looking into the valley with fog still sticking in random pockets. I saw few in the morning except for some day hikers. I went a few miles to a shelter where I stopped to take off my rain gear, get water, and use the privy(toilet). There were still a handful of thrus packing up to leave and we chatted a bit recounting the cold and rainy night. The services at shelters are nice and convenient, but I’ve yet to decide if it’s worth hiking an extra distance off trail and back on. I think I was off trail a good 30mins doing my housekeeping there when I could’ve done it on trail. I stopped a lot today with the rain coming and going. I kept changing in and out of my rain gear and it was time consuming and hot to wear up the hills. In the morning I listened to more of “The Fault In Our Stars” and the trail actually meandered a bit and was gradual and that was really enjoyable!

I ran into more thrus in the afternoon. Everyone is really nice but few keep up the pace I’m going. I know this will improve as the time passes and everyone gets their trail legs. I’m slaying the uphills and very thankful that my legs have responded so well to the hills. I hiked with Coyote(after a Joni Mitchell song) the most today. We overlapped for a couple of hours and had lunch together and that was nice. I might see him again as we both are going off trail tomorrow for town stuff. As we were going up our steepest climb yet, a day hiker going the opposite direction told me I had a really nice fan waiting to surprise me about four miles away and some other great trail magic was just two miles away. It was already late afternoon, so I booked it and told Coyote I’d see him in a bit, as I figured my fan had possibly been there for hours at this point. As I was going downhill right before the trail magic, I walked by a hiker that was stopped and eating. He seemed to be going the opposite direction and I was on a mission, so I said hi and kept going down swiftly. Around the corner was my first trail magic of the hike! They had everything laid out a hiker could possibly want and hot dogs on the grill. It was drizzling and I was just impressed that they’d stand out in the rain for hikers. I took a picture with our wonderful trail angels who went by their last names, Hayes, Johnson, Chastain. Thank you for such great trail magic! Yes, I’m a dork with the umbrella, but I’m a dry dork! 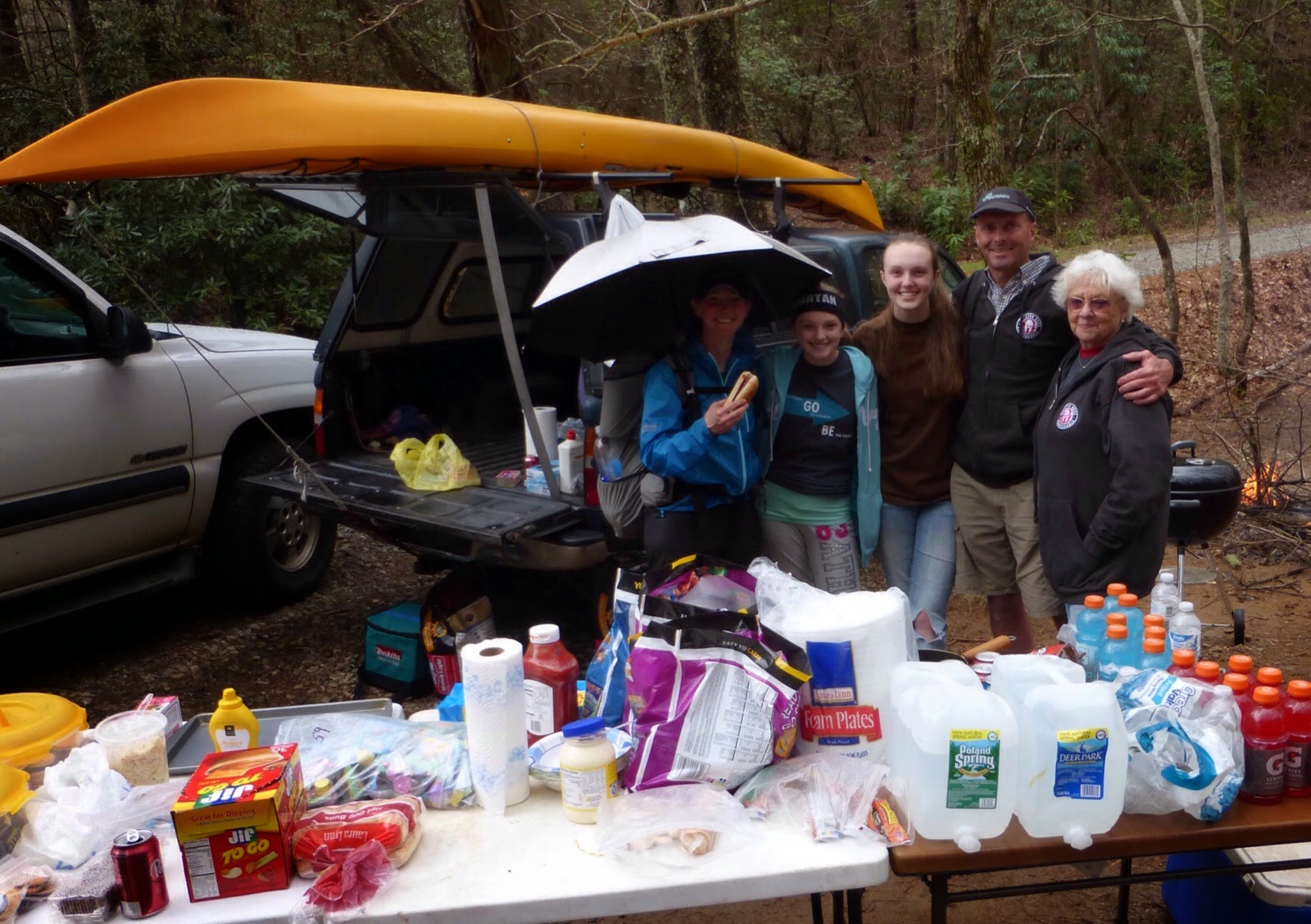 I knew I had someone waiting for me, so I had a hot dog and explained my need to leave. Before I left, the other hiker I had barely said anything to up the hill introduced himself. It was Sparky! He is a first time thru hiker from London who I had emailed with a bit before trail about battery choices and I really wanted to meet him in person on trail. We knew he was starting about a week ahead of me so I wasn’t even expecting to see him so soon. I was glad he recognized me as I would have been bummed not to talk to him. We got a picture together. Wired and Sparky! Cracks me up! 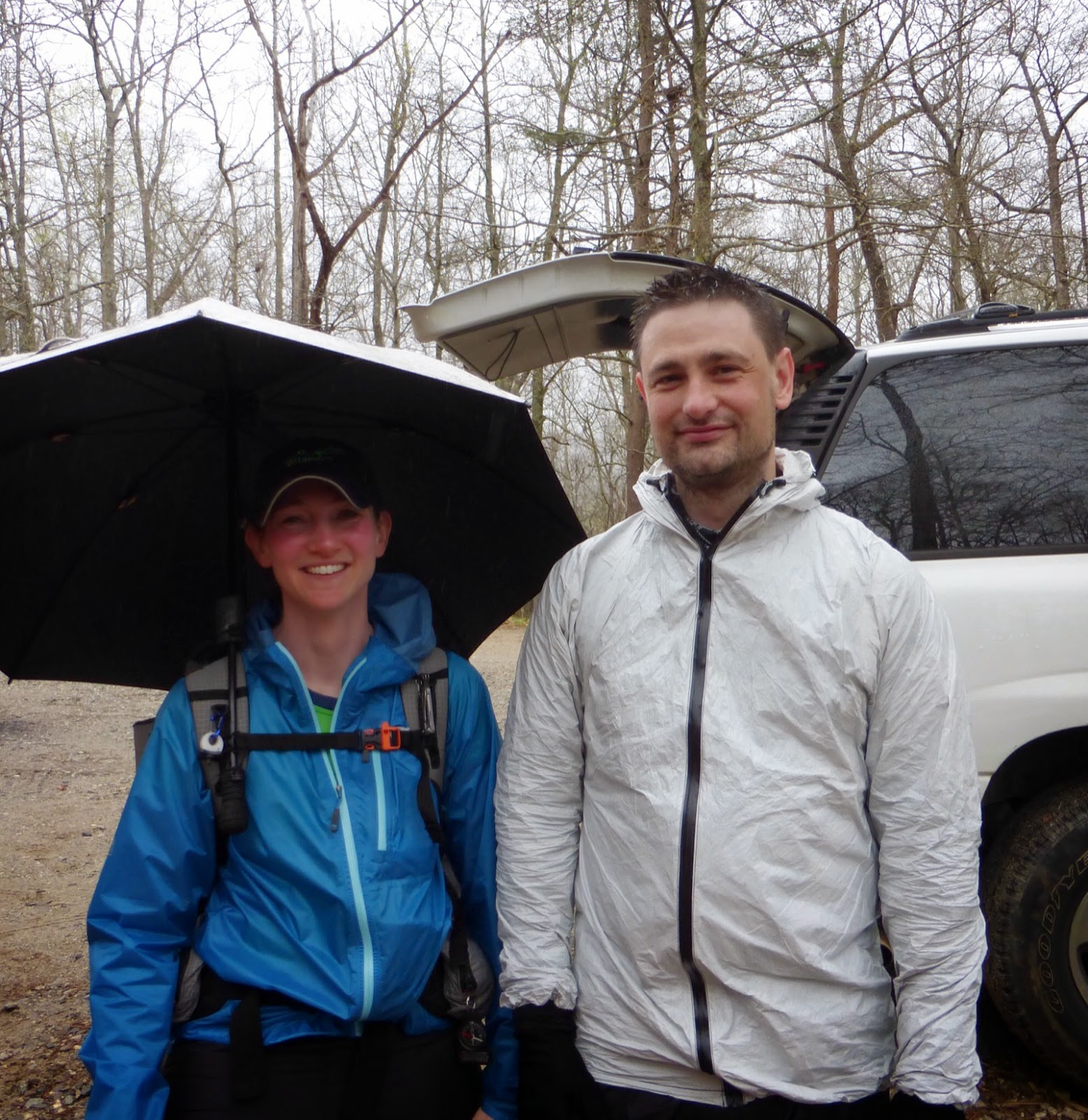 Then Coyote showed up and we took pictures of each other before we separated. 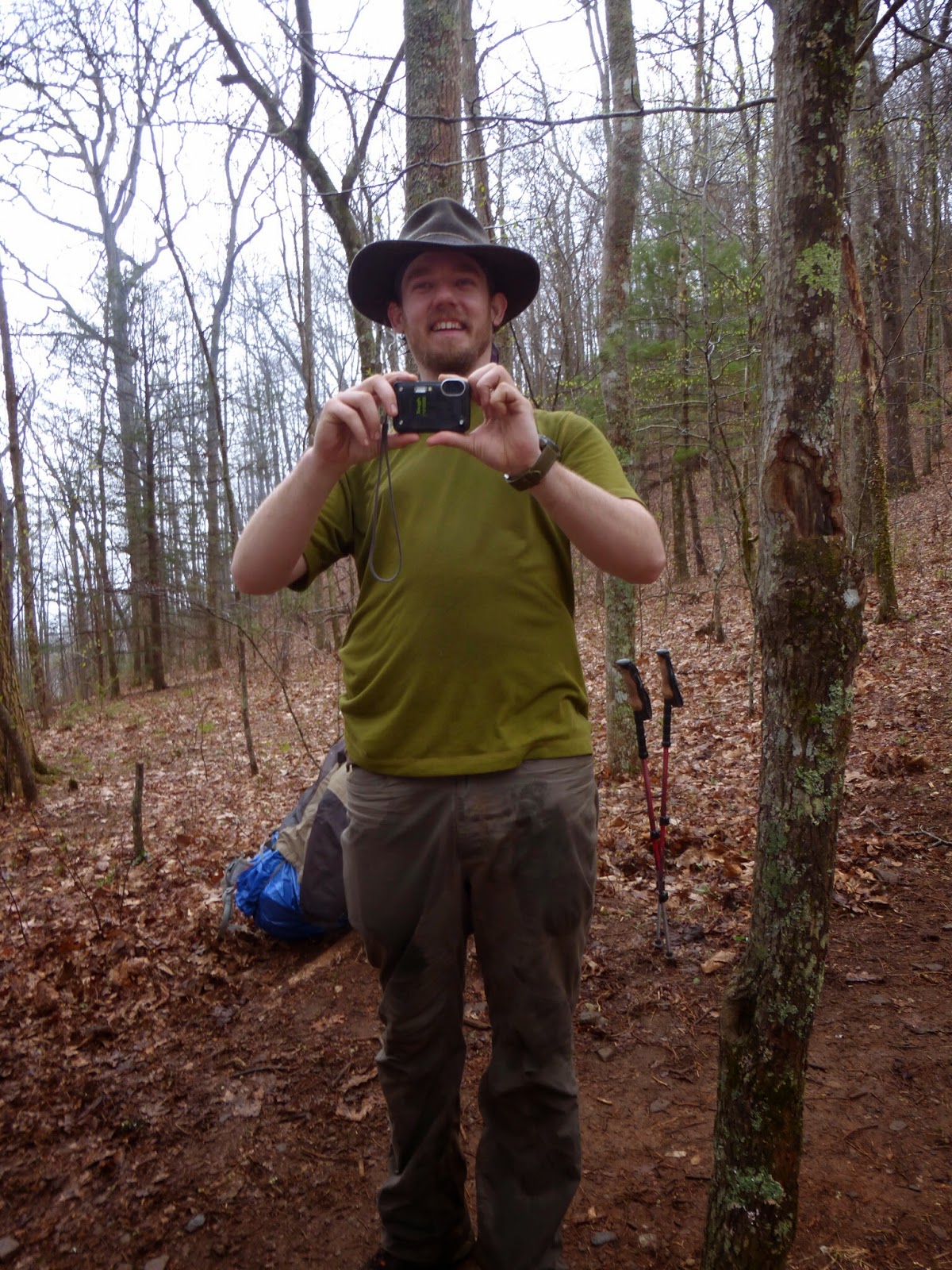 I hustled to make it to the person waiting for me and arrived to find a different person there instead and felt bad that I had just barely missed whoever made the effort to come out and see me. I think his name was Jason so if you’re reading this, you totally motivated me at the end of the day today and I really tried to get there as soon as I could. I was just two miles from my final destination and Sparky hiked up so we hiked up Tray Mtn together and are now camped together about 100yds from lots of people at the shelter. We found that we have tons of the same gear and random characteristics. It was seriously insane the compatibility of the most random things. He actually admitted to watching every episode of friends, ha! Sparky’s had an injury and is just now getting a regular pattern down. He just resupplied today, so the goal is to overlap a bit again in a few days after I go into town tomorrow and catch up again. He keeps a blog called sparkyhikes. Look at his “about me” section as I like the way he tells his story behind doing the trail and you’ll see why I’m rooting for him.

I forgot to get a campsite view, but here is the view on top of the mountain. Sunrise should be a good one tomorrow. 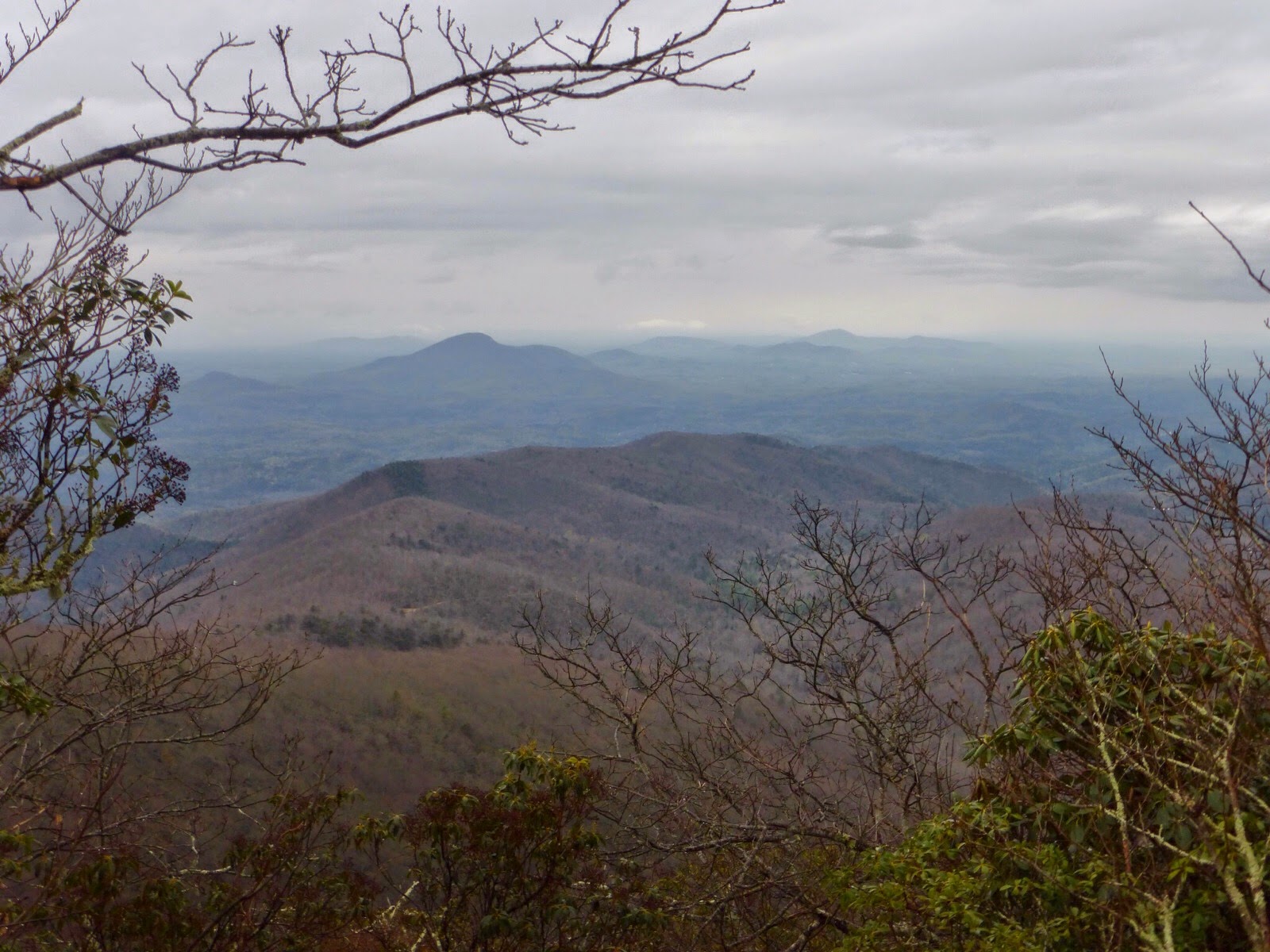 It stupidly drizzled as we set up our tents and I’m still getting the hang of mine, but improving. I’m doing something wrong with the setup and will try to watch the setup video when I get in town. It’s doing great though and I like it a lot more than the ZPacks Hexamid. It is much roomier and I can make it fully enclosed which I really like! I was very happy that I took it down in the rain this morning and there wasn’t sun to dry it out, but it wasn’t soaked when I pitched it tonight in drizzle. I wiped the floor dry with a bandana and was all set! Okay, good night:)