I woke up to nature’s alarm clock this morning around 6am. There was some kind of animal making very odd loud noises in the dark all around the camping area in the trees. The best guess was from Beer Hunter, who said that it was an owl, that sounded like a monkey at times, that was having a territorial dispute. Either way, it got me up and I was hiking by 7am. I wanted to get a good early start because there was a 60-70% chance of thunderstorms in the afternoon and I wanted to do miles early just in case. Beer Hunter and Timber(pictured yesterday) were the other early risers at camp and I caught up to them about an hour into the morning. I had hiked with them a bit two mornings ago and they are one of the few who go close to my pace so it’s fun to overlap with them for awhile. They are friends that met in 2011 when Beer Hunter(from Indiana) did the whole AT and Timber(from England) did the northern half. They are now doing the southern half together and they can hike! We overlapped for at least an hour this morning and they are really fun with a great sense of humor. Beer Hunter knows his plants and helped me identify the little ones I’ve been seeing a lot as bluettes. 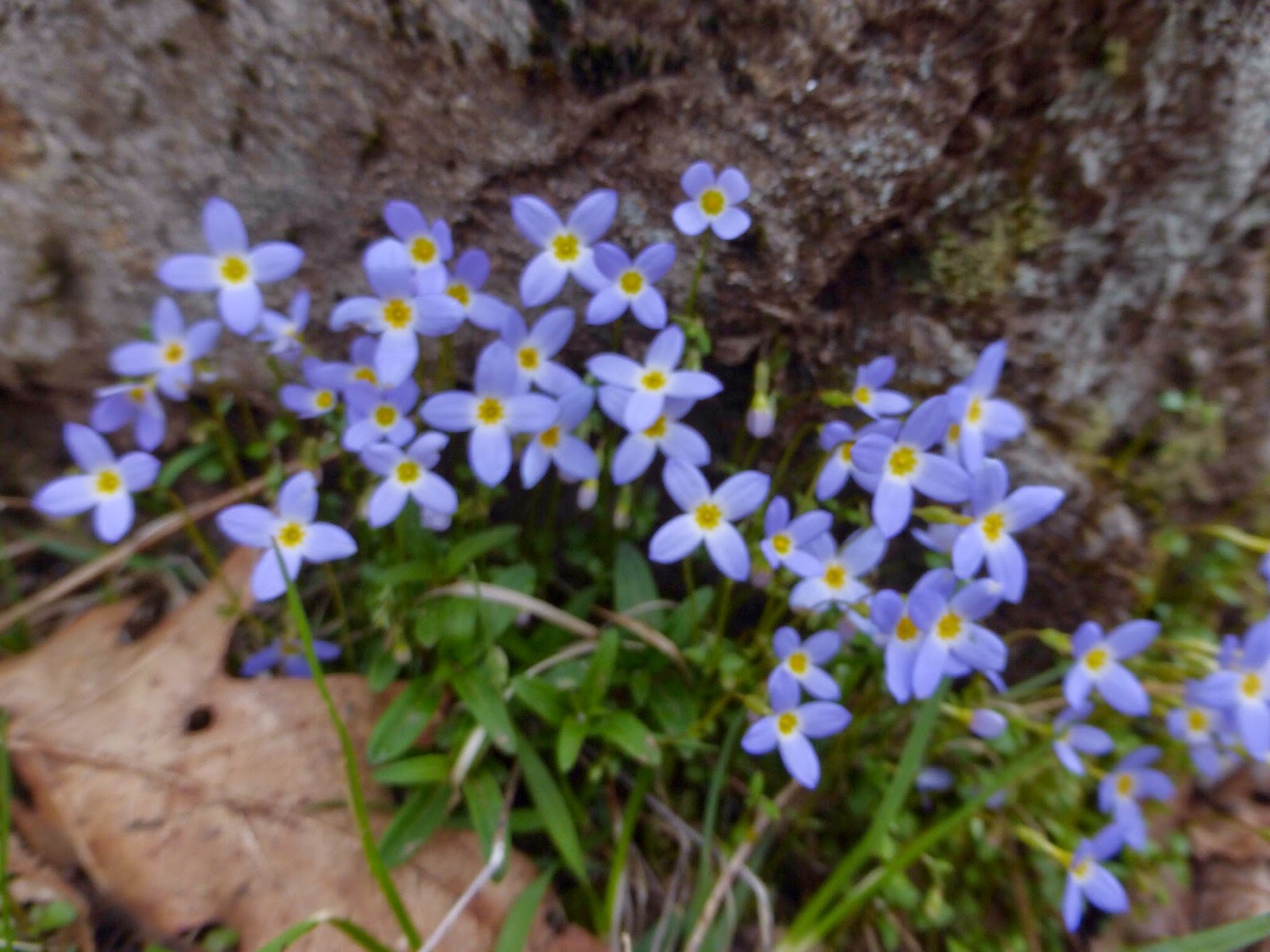 The clouds gathered on the way up and we got to a nice viewpoint. 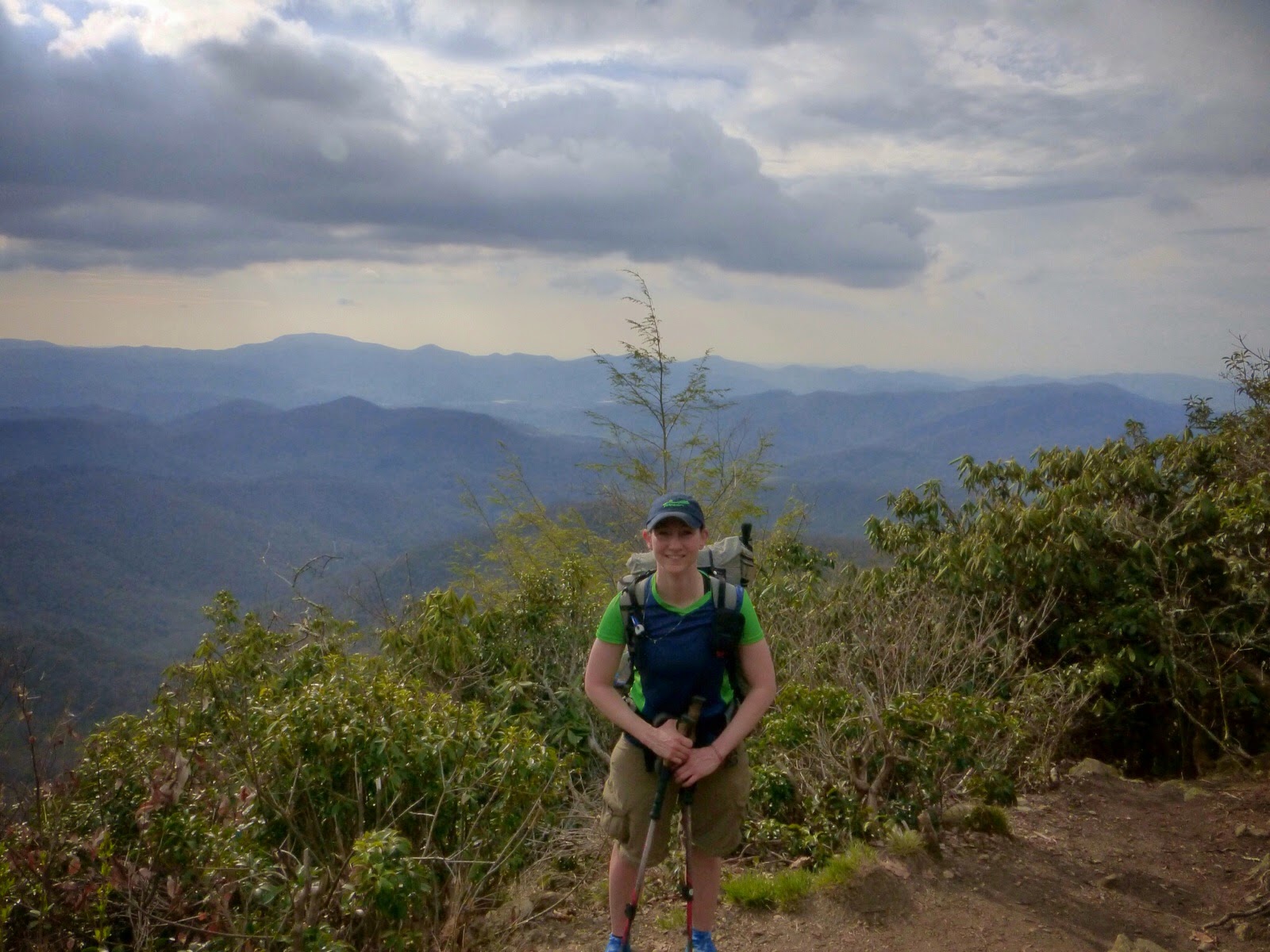 I went on ahead of them when the steeper uphill climb started up to Albert Mtn fire tower. The final .3mi seemed to take forever as it was fairly straight up. There was a combination of steps and rocks that I had to practically scramble up at times. Just as I started that part, it started to rain lightly and continued much of the day. 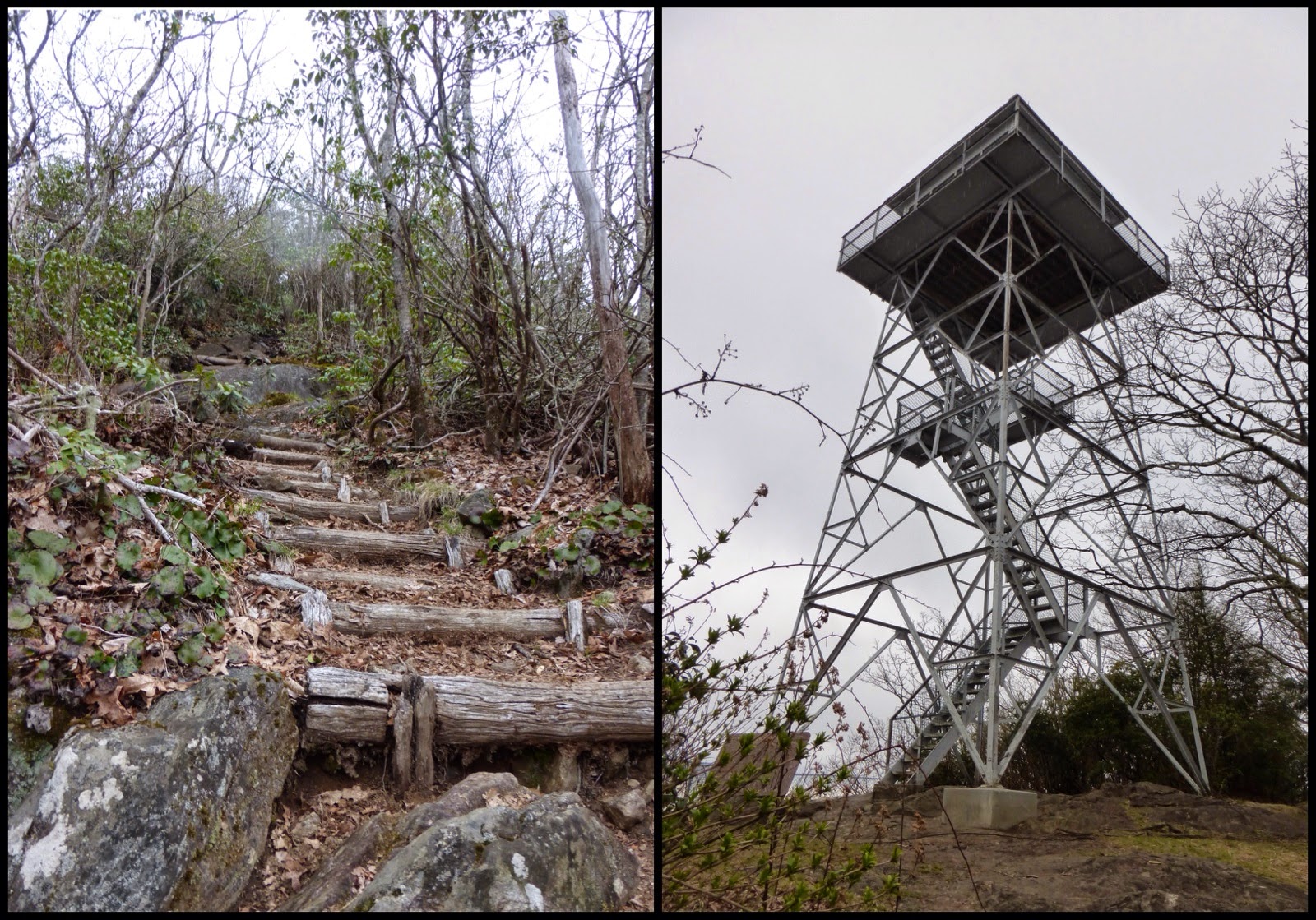 The top was locked, but this is the view from the top of the steps. It was difficult to get a good picture of the clouds and incoming weather.

Much of the rest of today was a gentle downhill cruise. There were some climbs, but they didn’t last long and returned to the gentle downhill. It sprinkled or lightly rained most of the day, so I took less photos. I stopped for a late lunch at shelter so I could eat protected from the rain. One of the local outfitters gave some hikers a big box of Krispy Kreme donuts to give to all the hikers at the trail. It was a nice surprise, but also very odd to see something so commercial like a big box of Krispy Kremes in the woods. This shelter is the first time I’ve felt really claustrophobic. Lots were there and stopped for the day already and many were coming in for a break as the rain got a bit harder. 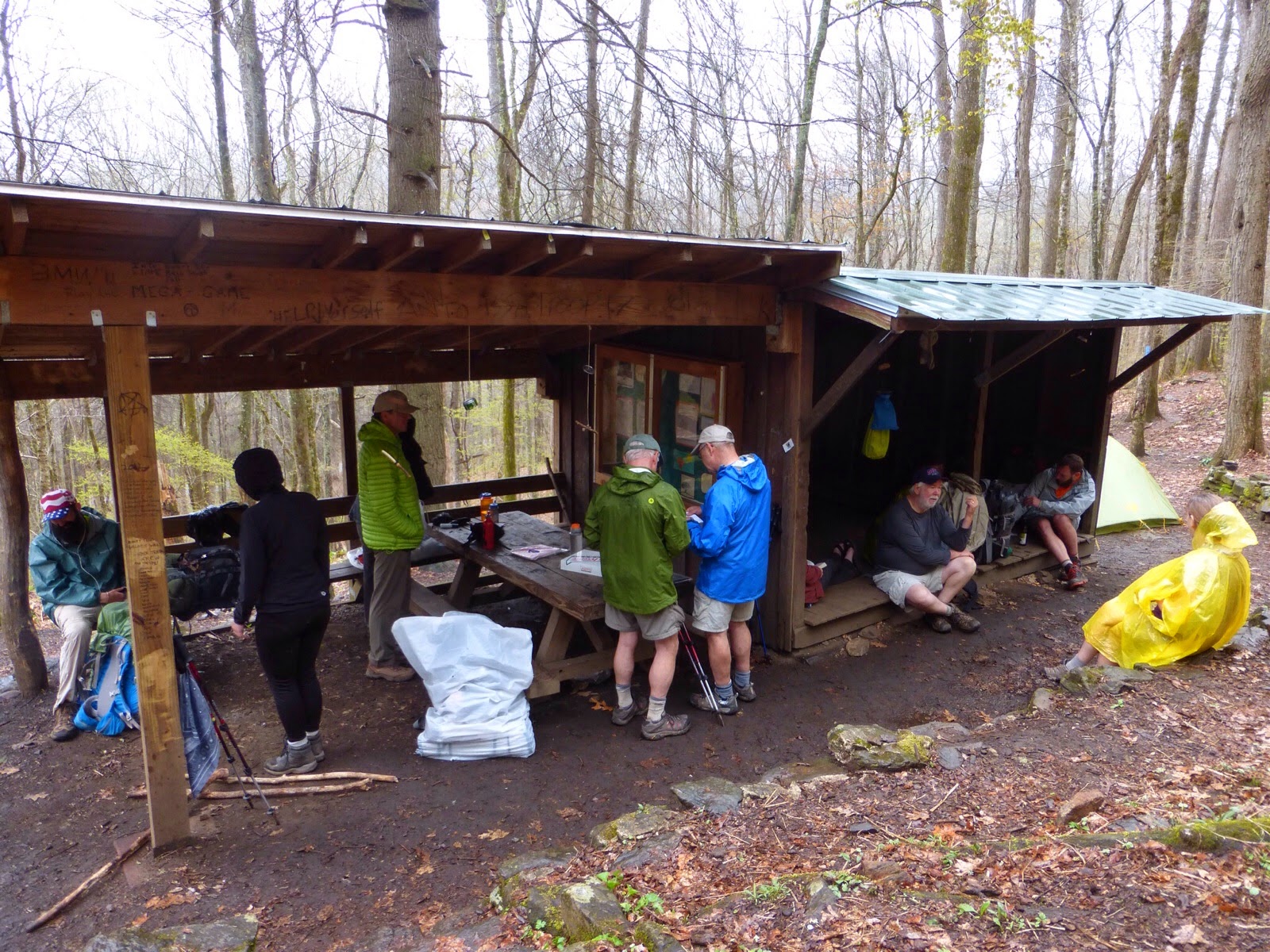 I hadn’t met any if them other than Beer Hunter and Timber who arrived as I was finishing my lunch. We ended up hiking the next hour together to a road where BH & T were going into town to resupply. There many choices of town stops along the AT so people are always going on and off. I continued my final climb of the day of 1,200ft over Siler Bald. Thankfully the rain stopped as I climbed and I was able to hike in my tshirt and shorts. As I got higher though, I hiked into the fog that had been hovering overhead. This is how it looked up top and as I hiked down. 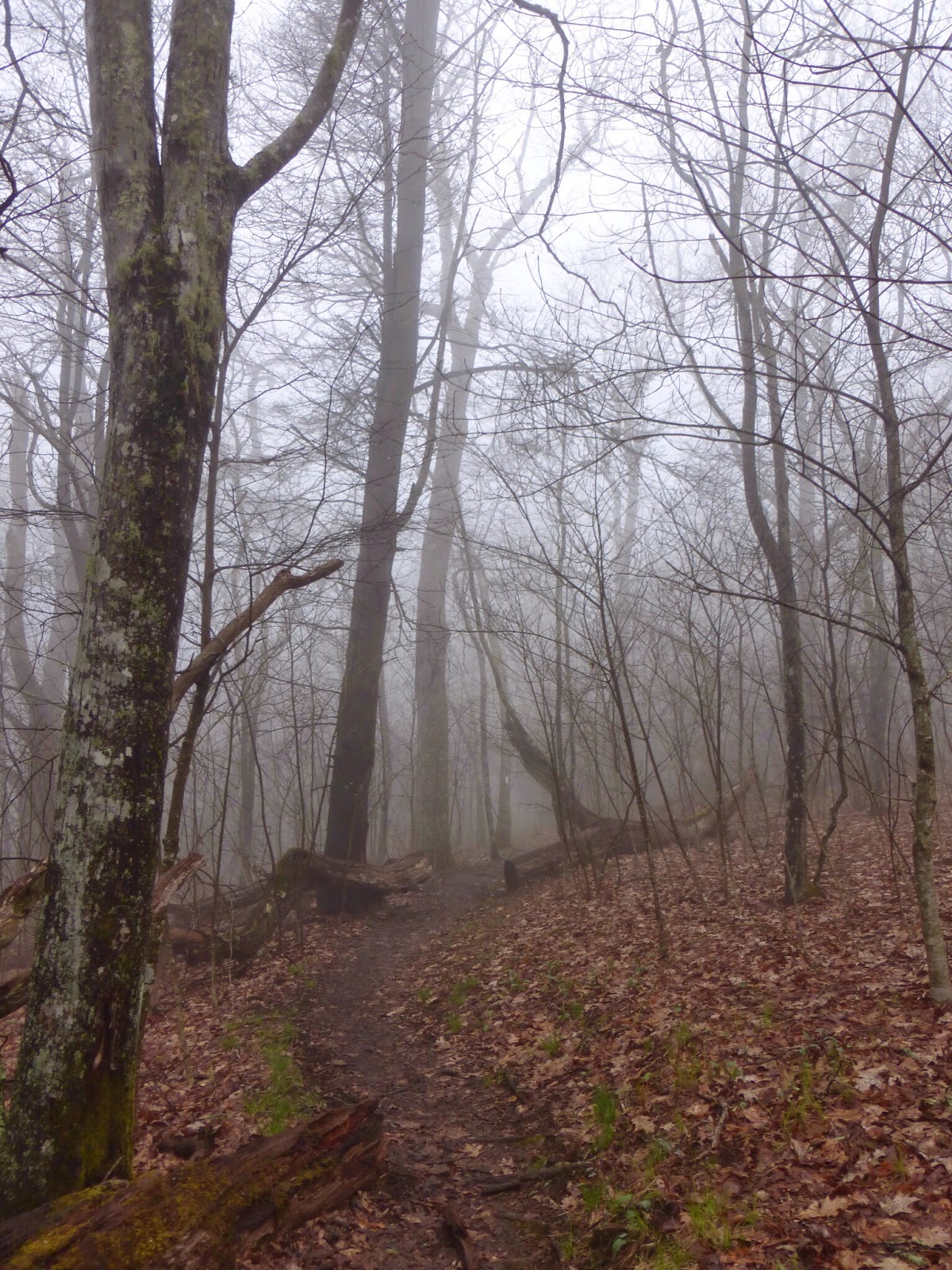 I finished by 6:10pm and I’m camped at a picnic area and am surprised to be the only one here. I think many went to town to avoid the possible storms today. Plus, I’m also using Guthook’s AT app. It has been great and gives lots of small campsites that aren’t listed in the AT Guide. It isn’t necessary to have it for the AT, but has definitely made it more enjoyable for me.

Fortunately, it was a day of rain and drizzle instead of storms. I’ll take that any day over thunderstorms! Chances return on and off for the rest of the week. I’m camped in the rhododendrons as shelter if it decides to storm overnight. 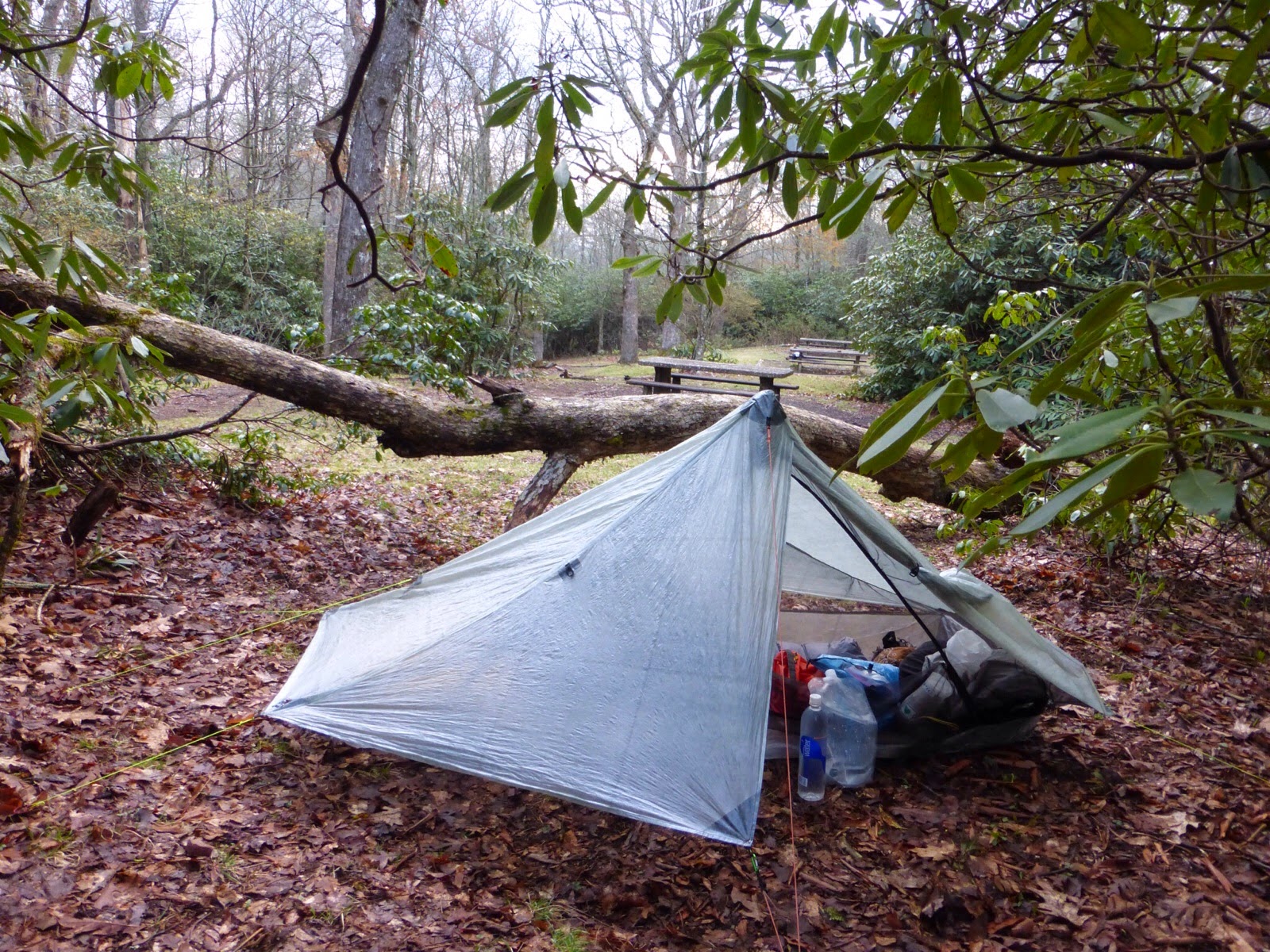 The only other person here is a one armed section hiker missing his left arm and his name is Lefty. I’m not kidding. He’s here with his dog named Lucy…get it? Lefty Lucy, ha! He is sleeping in his car and I’m jealous. He’ll hike a section and then get a hitch back to his car. It’s nice to be at camp on my own and get to sleep before 10pm! My neck is getting better as I can now turn it most directions without having to turn my whole body.

One more thing I want to mention. I want to give a shout out to Moises who is a student at a high school where I substitute. I heard he’s been following the blog regularly and I thought I’d surprise him with a shout out. HI MOISES! Make sure you’re doing that science work for Sue…yeah, that’s right, I know about that!