Elevation chart courtesy of Guthook’s AT Hiker app. He has apps for many trials including the PCT and CDT.

I was up and hiking by my regular 7am start time. The weather has been perfect the last few days with cooler weather and a breeze. I actually hiked most of today with pants and long sleeves. It’s going to warm up a bit more tomorrow. I’m indulging in these mild and less humid days now, because I know these types of days are numbered before the summer heat really hits. The trees above about 3,000ft are more bare, but the ground is greener. Here you can see the ground covered this morning on the right side by the leafy may apple plants that have been all over the trail since day one and continue to grow and cover more ground. 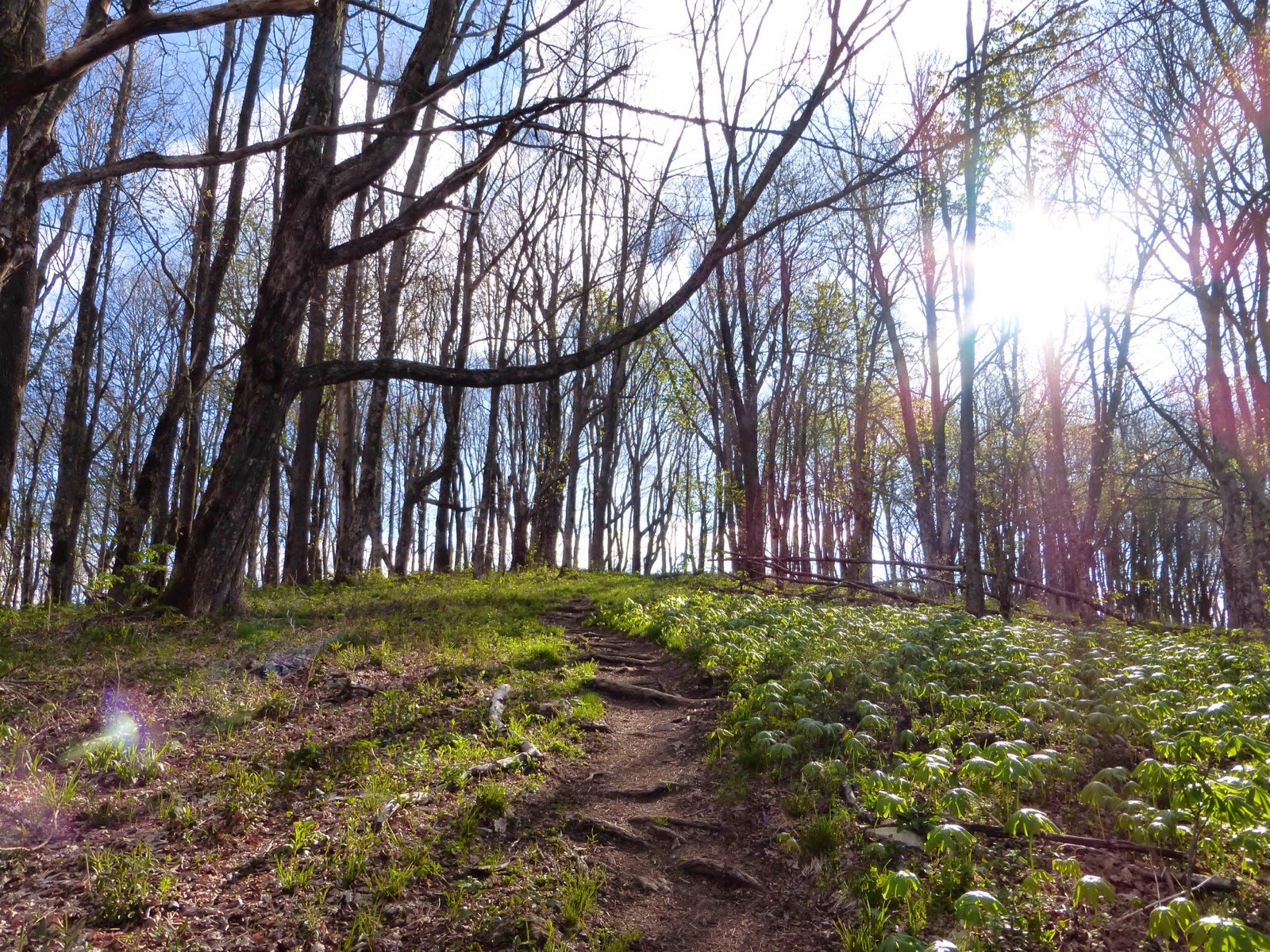 Early in the day, there was a nice stretch that broke out of the trees for a mile or so and gave nice panoramic views. These are often called balds out here. The ones I went through today were called Big Bald and Little Bald.

The second one, Little Bald, reminded me of walking on the CDT last summer. Expansive views, windy, posts with a faint trail, and it followed a dirt road and fence at times.

I hiked alone most of the day. All morning, I walked by hikers in tents or packing up for the day. There was going to be a large trail magic event at one of the major road crossings (Sam’s Gap) today. There have been advertisements for it along the trail for days. Pretty much a big barbeque for the hikers. These happen a lot on weekends and are hosted mainly by hiking groups or church groups. I missed one yesterday that was also quite large. I was 2hrs early and they were just setting up, but I wasn’t feeling well enough to enjoy it anyway. As for today’s I know the trail magic is part of the trail and that the social aspect is a big part of the AT, but I was a good 3hrs off from it, and the large group thing is less enjoyable for me. If I hit it naturally as I hike, I think it’s cool, but I don’t change my plans too much to catch it. I completely understand the allure of it for most hikers though.

I did have a wonderful lunch to myself on top of a short side viewpoint called High Rocks. I really enjoyed it. It was cool and breezy out, but the rock was nice and warm. I seriously almost fell asleep up there with how I’ve been feeling lately! 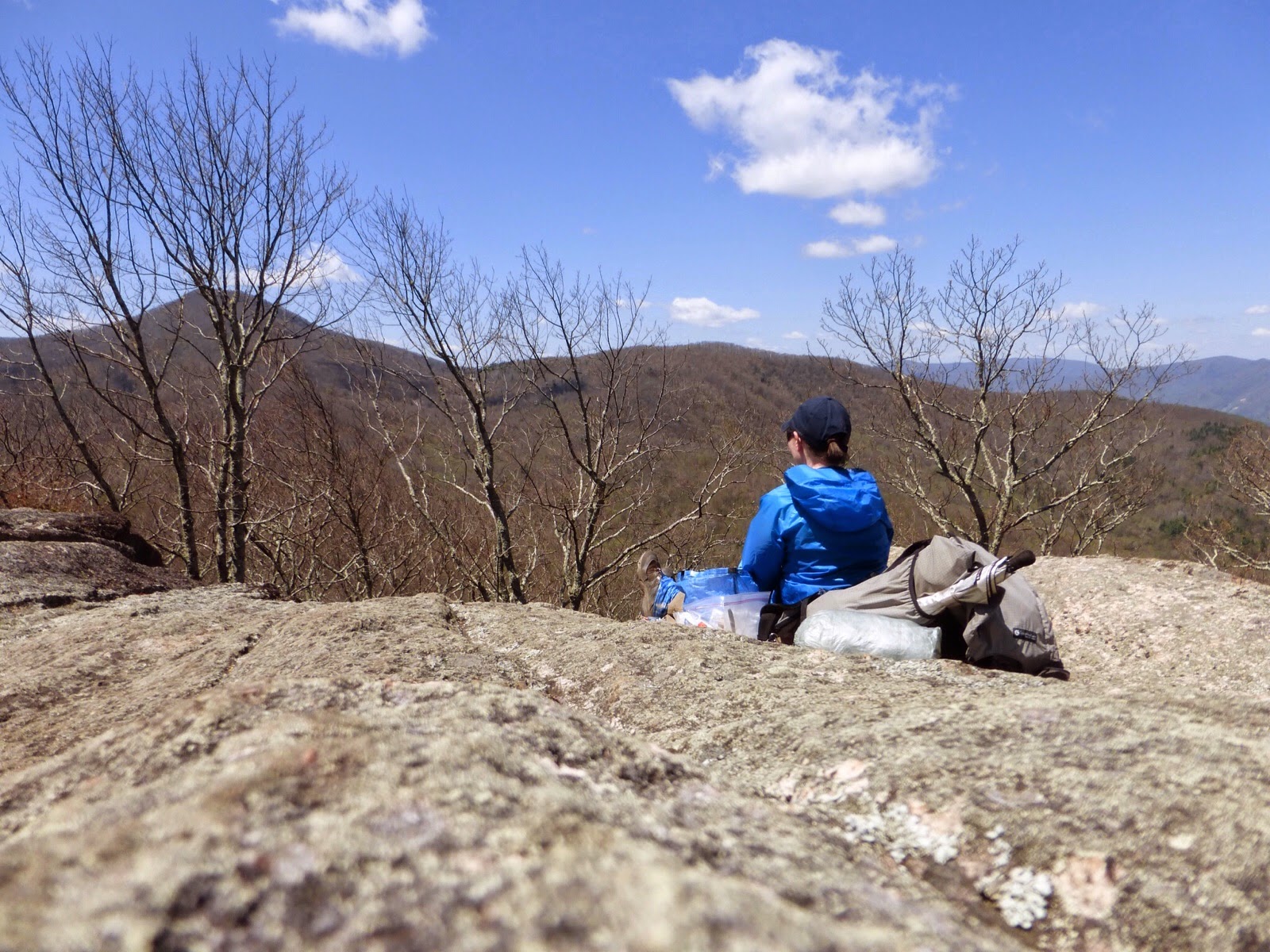 A question I get often is what I do for lunch. It’s taken me awhile to find things I like. I used to try the tortilla wraps with Nutella and peanut butter, but it is something I’ve quickly gotten tired of. For awhile now, I’ve liked doing two taco sized tortillas with tuna and string cheese. I love doing a Crystal Light flavored drink for lunch too. Then I usually do Doritos or crushed Pringles eaten with a spoon. For dessert, I like Oreos, a candy bar, or in this case a pink cookie from my hometown of Carbondale, Illinois. 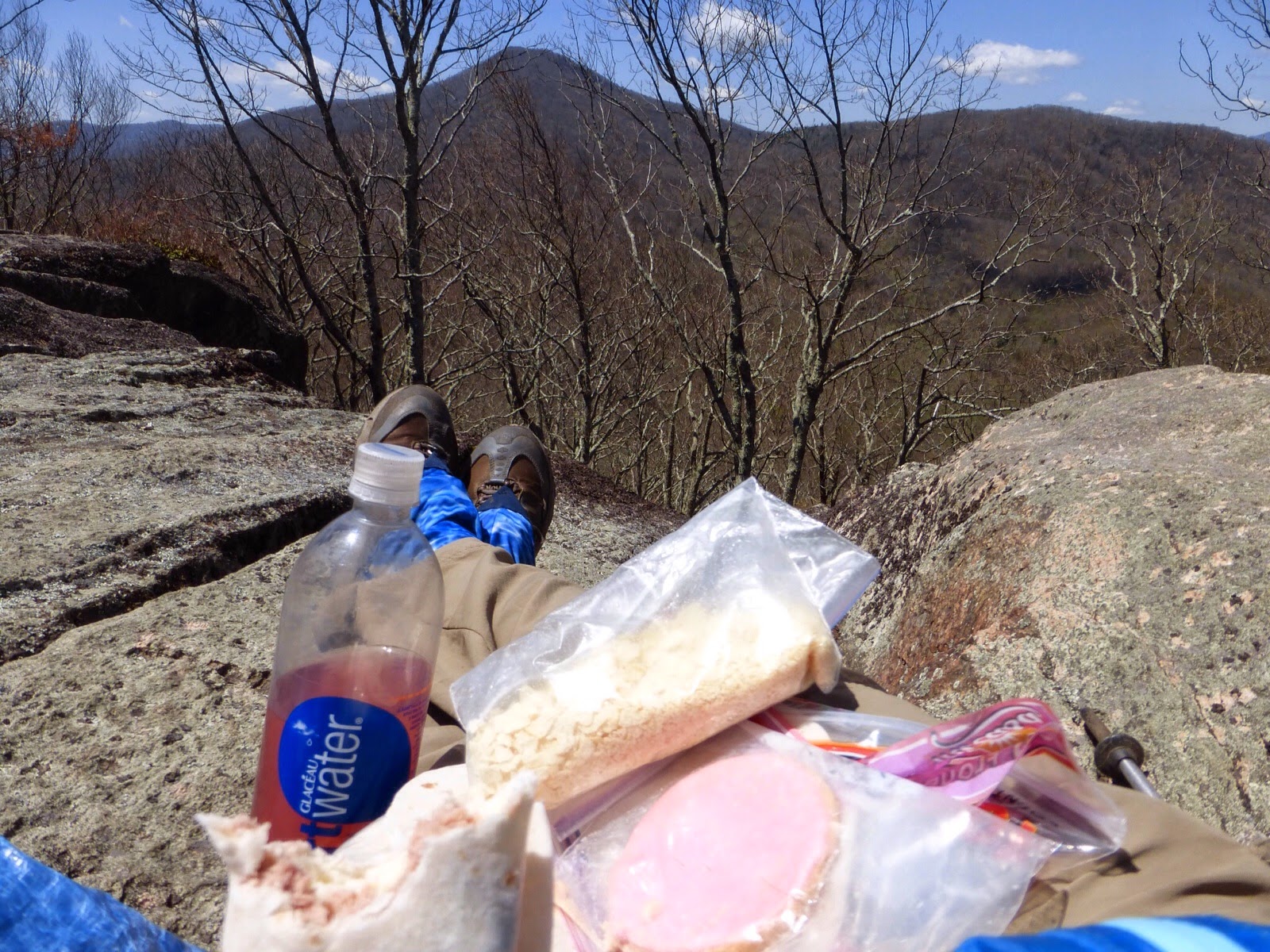 Most of today was a gradual downhill. As the trail dropped, the surrounding became much more lush and varied. The trail curved along a contour with a nice drop along the side.

Near the very bottom, the rhododendrons got really tall and thick. 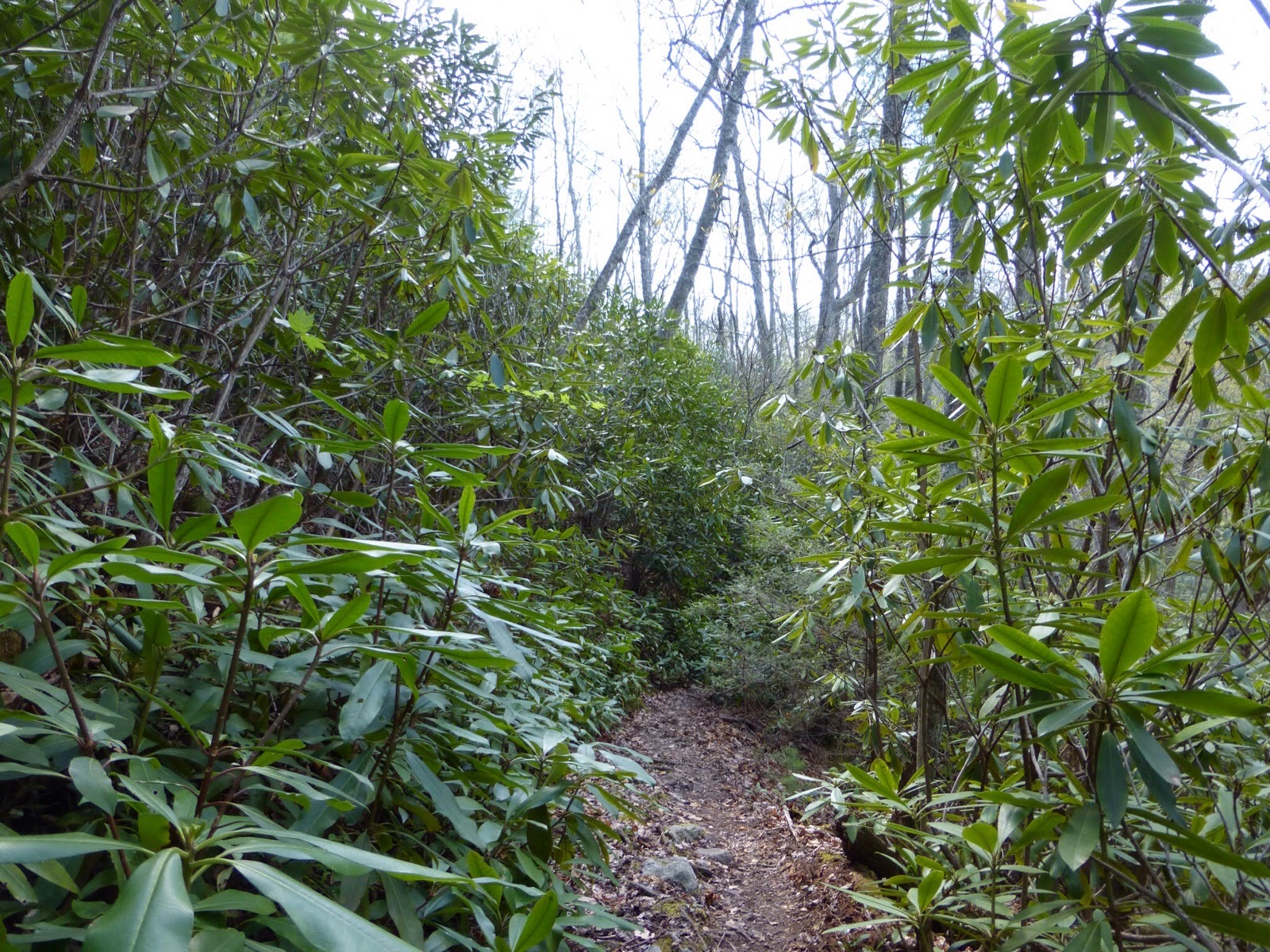 I got the road at 6pm and there is a popular AT Hostel there called Uncle Johnny’s. It looked very quaint and had options of small rustic cabins, a room with bunk beds, or camping in the courtyard kind of area. The one person I saw today was a section hiker that had stayed there last night. He said it was nice, but that it’s the weekend and that suddenly all the 20 somethings showed up at 2am and were up til 4am socializing…that sealed the deal for me that I was getting a hotel! I think I would have stayed there if there wasn’t a large group though. I’ve dodged the groups so far and have yet to feel like I’m in the herd, but I’ve been told I’m in it. Also, word has it that one hiker was sick recently at Uncle Johnny’s with possibly Norovirus, but that she was immediately sent to a hotel. I just think I’ll stay away from the crowds and with the way I’m feeling a nice long show and a clean bed sounded wonderful!

Apparently, there is no hitching in Tennessee and I was about 4-5mi from my destination. There is an option of a shuttle and I thought I’d first try walking the road to see if anyone offers a ride. Before I even got past the hostel, someone yelled, “Wired!” I looked and it was the youth (30 somethings) mission group I camped with two nights ago. I mentioned that they have vans and pick them up so that they gather at a central location each night and then take them back to where they were. All of them are still further back, but they were staying the night at the hostel. Many of them are from Salem, Oregon and I was surprised they even remembered me. Ungerwhere offered me a ride in one of their vehicles. Youth With A Mission is a national organization, but if you’re interested in their backpacking mission work click here. Just a really kind group!

Ungerwhere dropped me off at Subway (so I could use my gift cards!). The town is spread out, so I still needed to get to the laundromat and then to my hotel. I kid you not, I walked less than a minute from the Subway and a couple in a car pulled over and offered me a ride! This is such a nice town! The man driving has section hiked all but the last 100mi or so in Maine. His name is Peanut Butter and was diagnosed with colon cancer (now 6yrs cancer free!), but would still like to finish his last 100. They said they just did a large trail magic gathering last weekend and served 75 hikers. 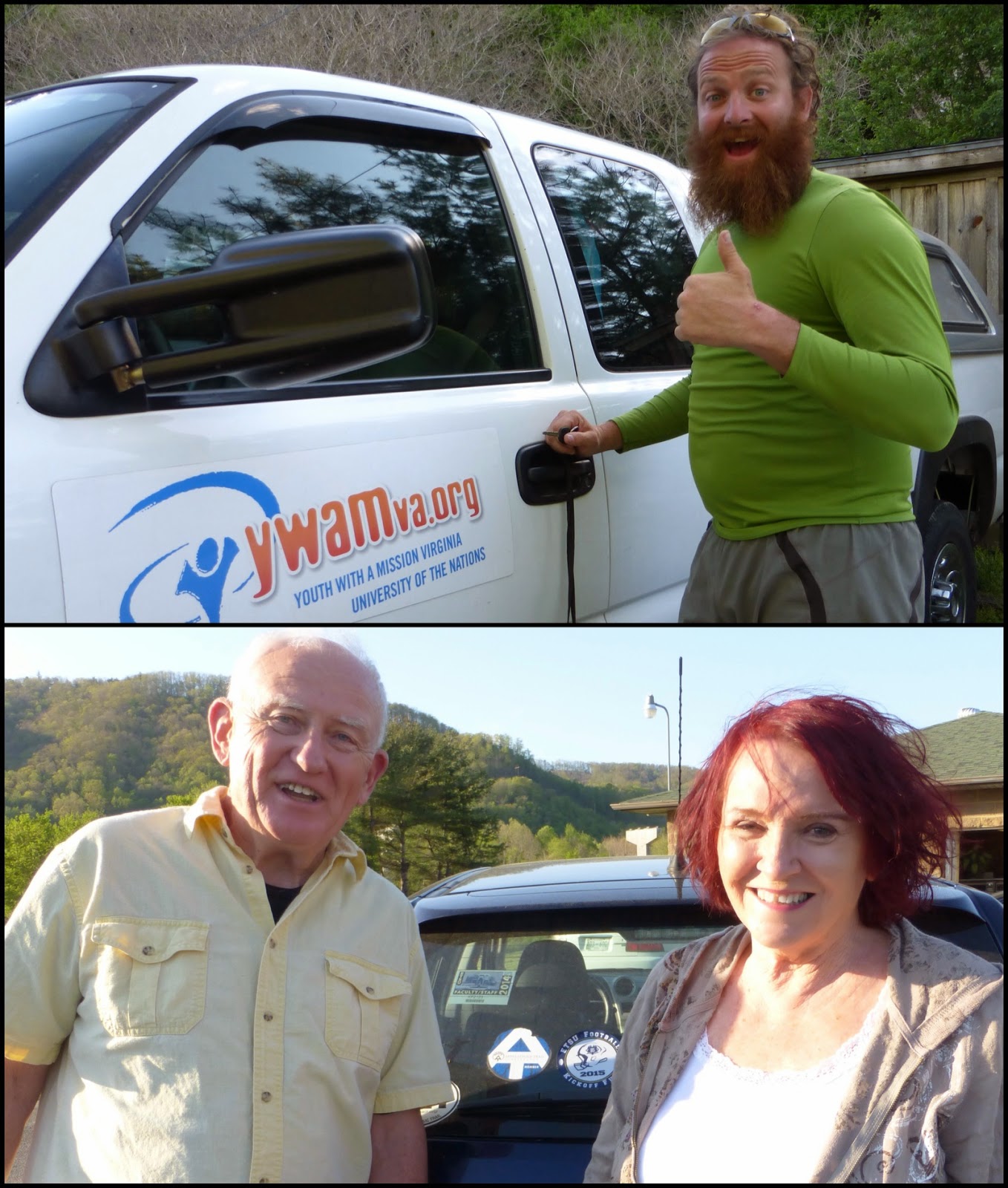 After I did laudry, I walked to the nearby McDonalds, which is by my hotel. I used my gift card to get a milkshake and as I was leaving a retired army vet who seemed to be with his grandson asked if I needed a ride back to the trail…seriously! Such a nice town! I got to my hotel and man am I happy about that decision! I’ll head out around noon tomorrow so I get some downtime.
I want to thank everyone for the gift cards. I have mutiple Subway cards and used Corinna & Glenn’s today. THANK YOU! Also thanks to Glenn & Carol for the McDonalds card. Love those! 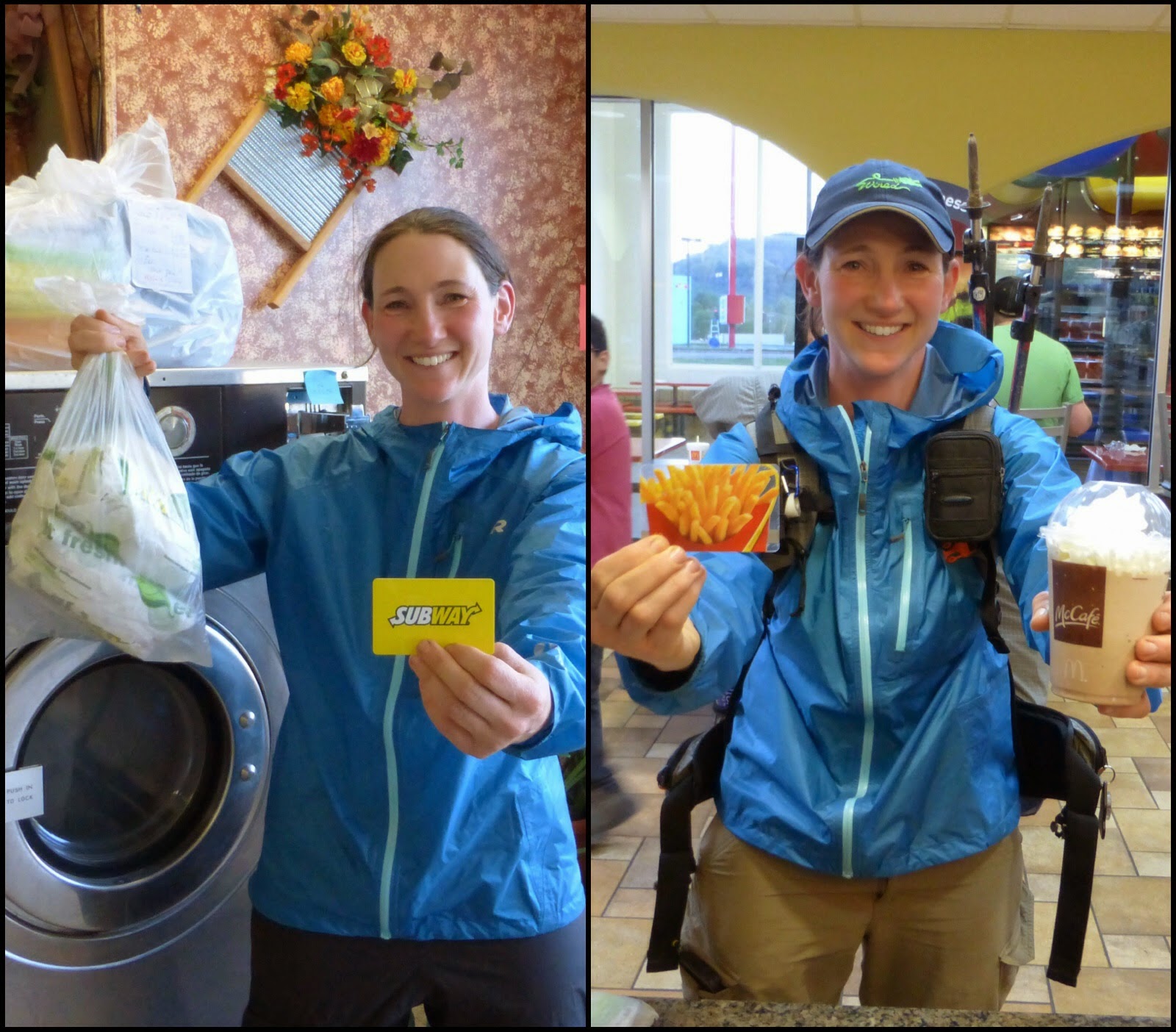