At 5:58am I was awoken by nature’s alarm clock. A very persistent bird just above my campsite with an interesting call. If anyone knows it, please let me know. Click here to hear it. With the early wake up call I was hiking by 6:50am. I’ve dropped significantly in elevation and I was in more of a jungle type atmosphere this morning. I could tell immediately that it was going to be a more hot and humid day with the air already thick. I soon passed two campsites each with a tent and at one a couple was getting ready to head out. Then a bit later I passed a group of four just getting up. At 9am I passed a shelter with at least a dozen younger hikers who were either still sleeping or groggily getting ready. It looked like they had had a late night. As the morning continued, I saw a pair of women taking a break and one man I passed on the trail. I’m definitely seeing more people, but I’m not getting a chance to hike with them. It’s usually a brief hi and sometimes an exchange of names. As I hiked the first couple of hours this morning there were a TON of spiderwebs across the trail. They were thin enough to not be seen, but they were all over my legs, arms, and face as I walked. It definitely set off my claustrophobic need for physical space and it ruined one of my favorite parts of hiking, which is early morning hiking. Hopefully, it won’t be this bad every morning. I tried to be like Tris from the Divergent trilogy that I’m listening to. She takes fears or discomforts and tries to calm herself by rationalizing or imagining the discomfort as something else that is more comforting. I really tried, but there is nothing that I could replace for that feeling of spiderwebs clinging to my face, arms, and legs. It was also humid so removing them from my sticky skin wasn’t as simple as it could be. I get chills just thinking of it! I did develop a strategy though. I found that I could hold my poles from the bottom with each hand and loop them together up top and comfortably walk with them in front of me to at least keep the webs from hitting my face. At one point I saw that I had avoided a large web with a big spider which thankfully was between my poles and not on my face. I tried to take a picture, but the spider blended in too much with the background. As a consolation, here is a picture of what my morning looked like. 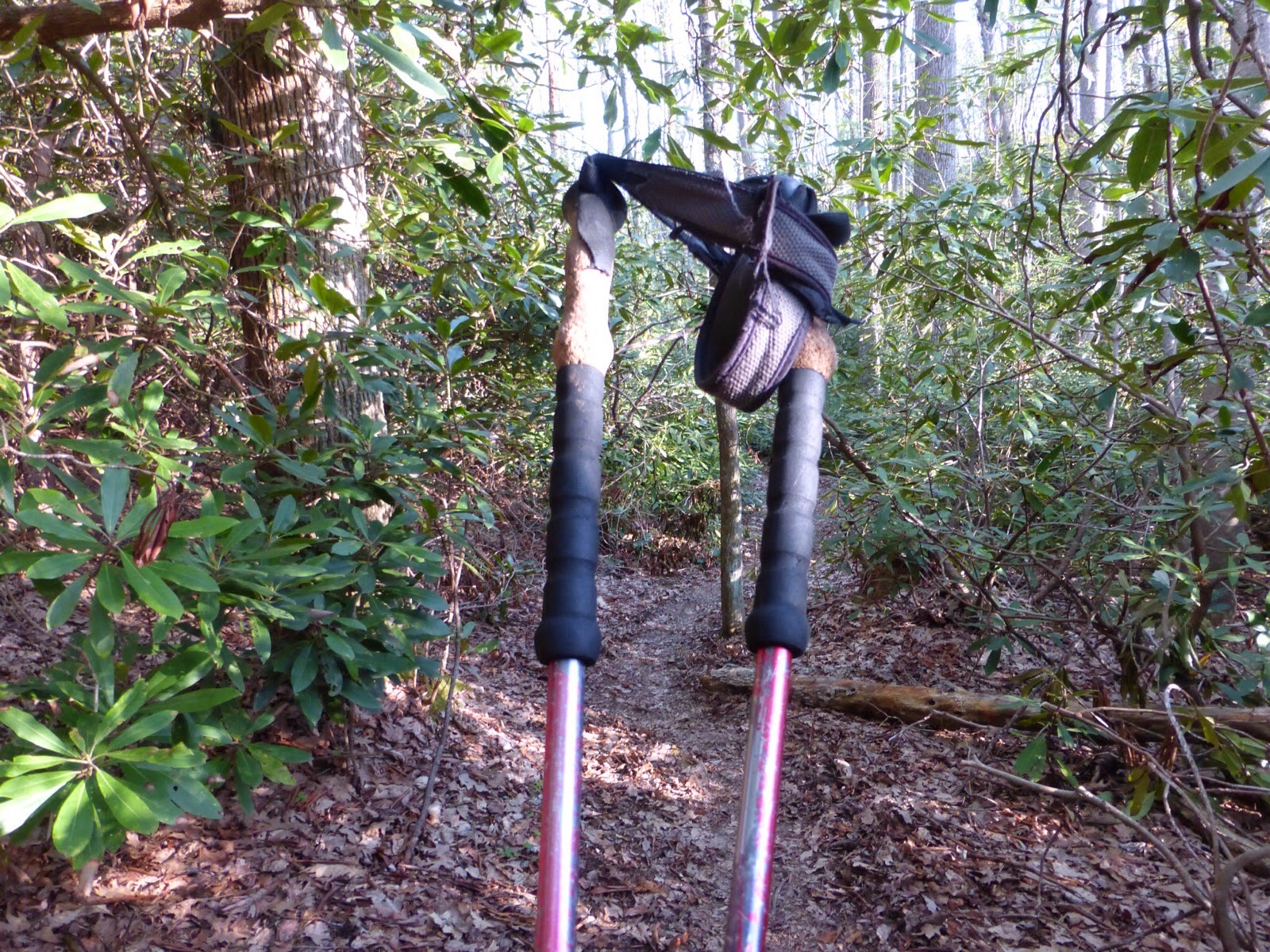 The rest of the morning I was entertained by local radio. I have enjoyed the country music so far, but I was energized today to find more variety with hip hop and pop stations too. That kept me entertained for the morning. Around lunch, I hit a road where many hikers into town. I met a hiker named Happy Hiker who I overlapped with for about an hour. It was during that time that the trail went through what has been one of my favorite stretches. It was a small gorge with cliffs on both sides. 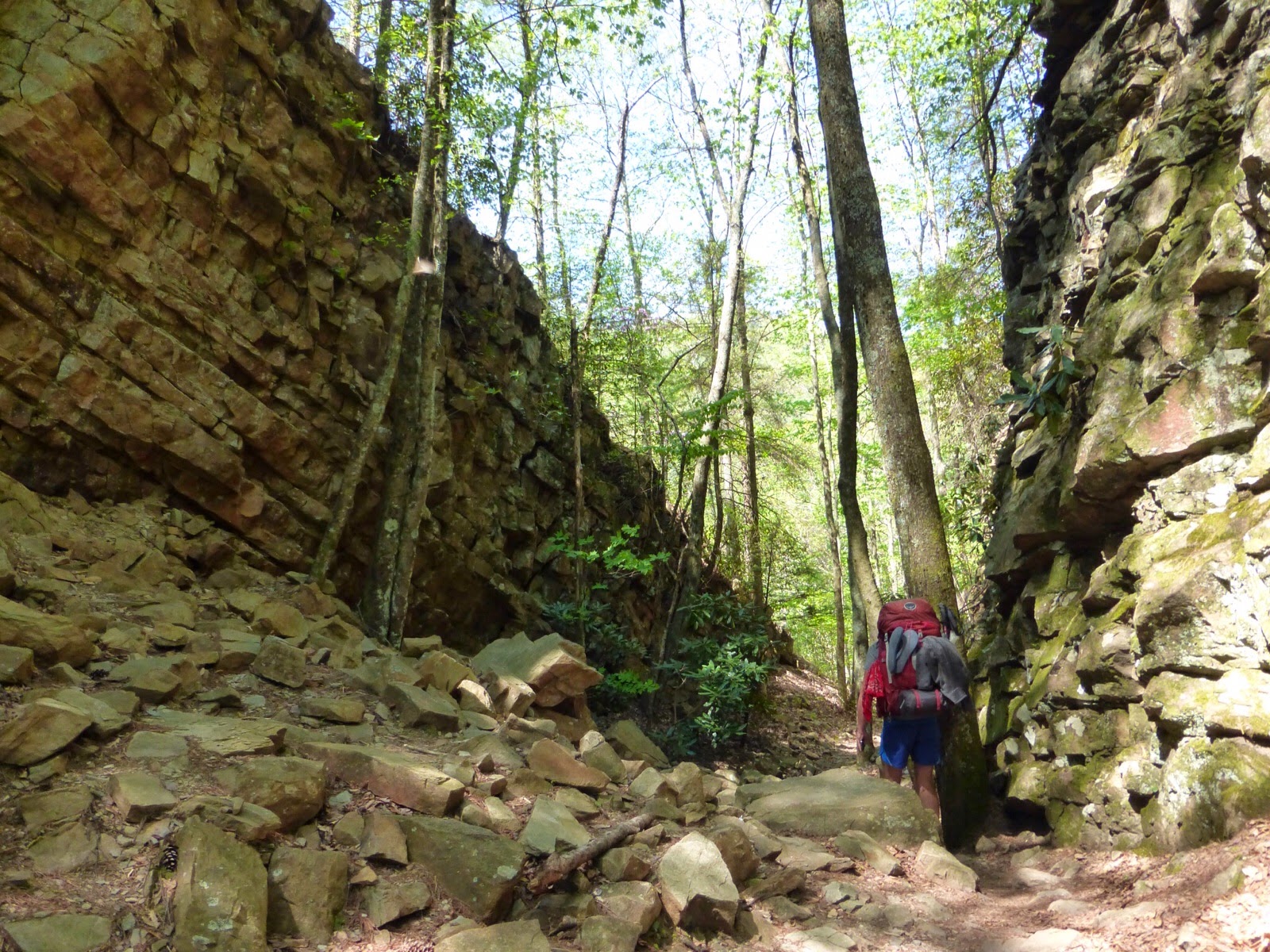 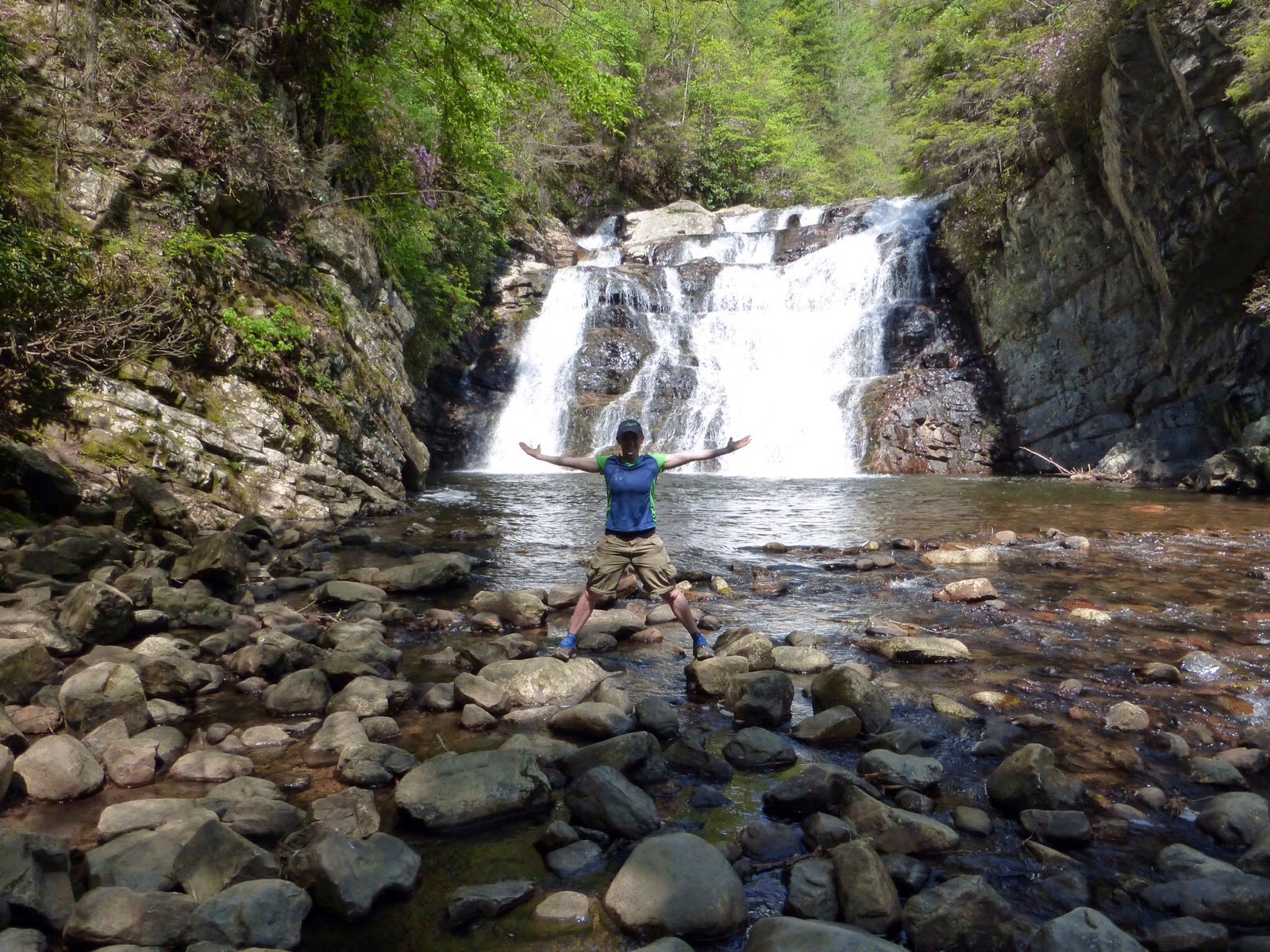 After the falls, the trail followed Laurel Fork for awhile and even skirted very close to the water against rock walls. That explains why there was a high water alternate route up above! It was cool. I also enjoyed the well constructed bridges through this part. Yes, this is the trail. 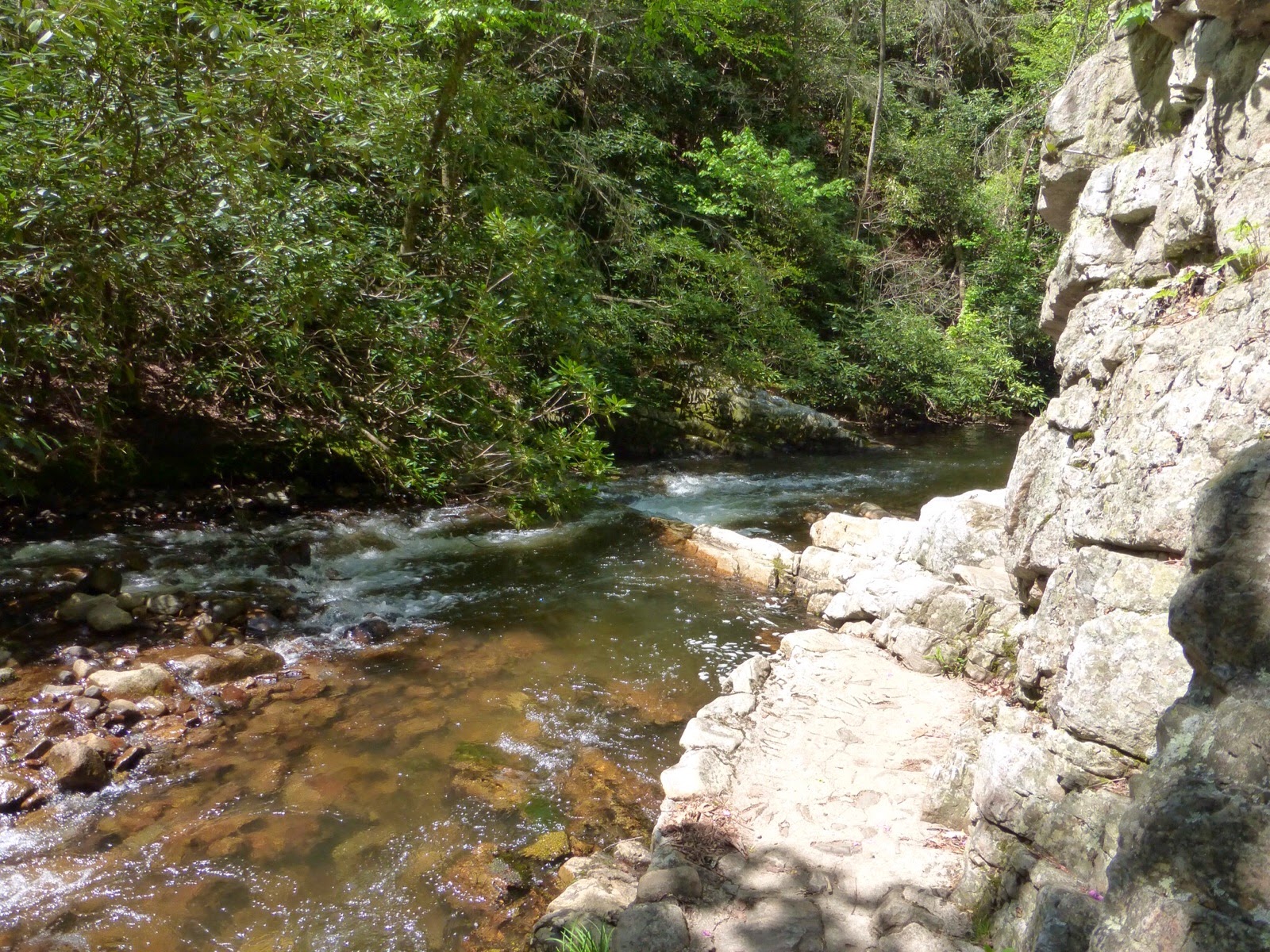 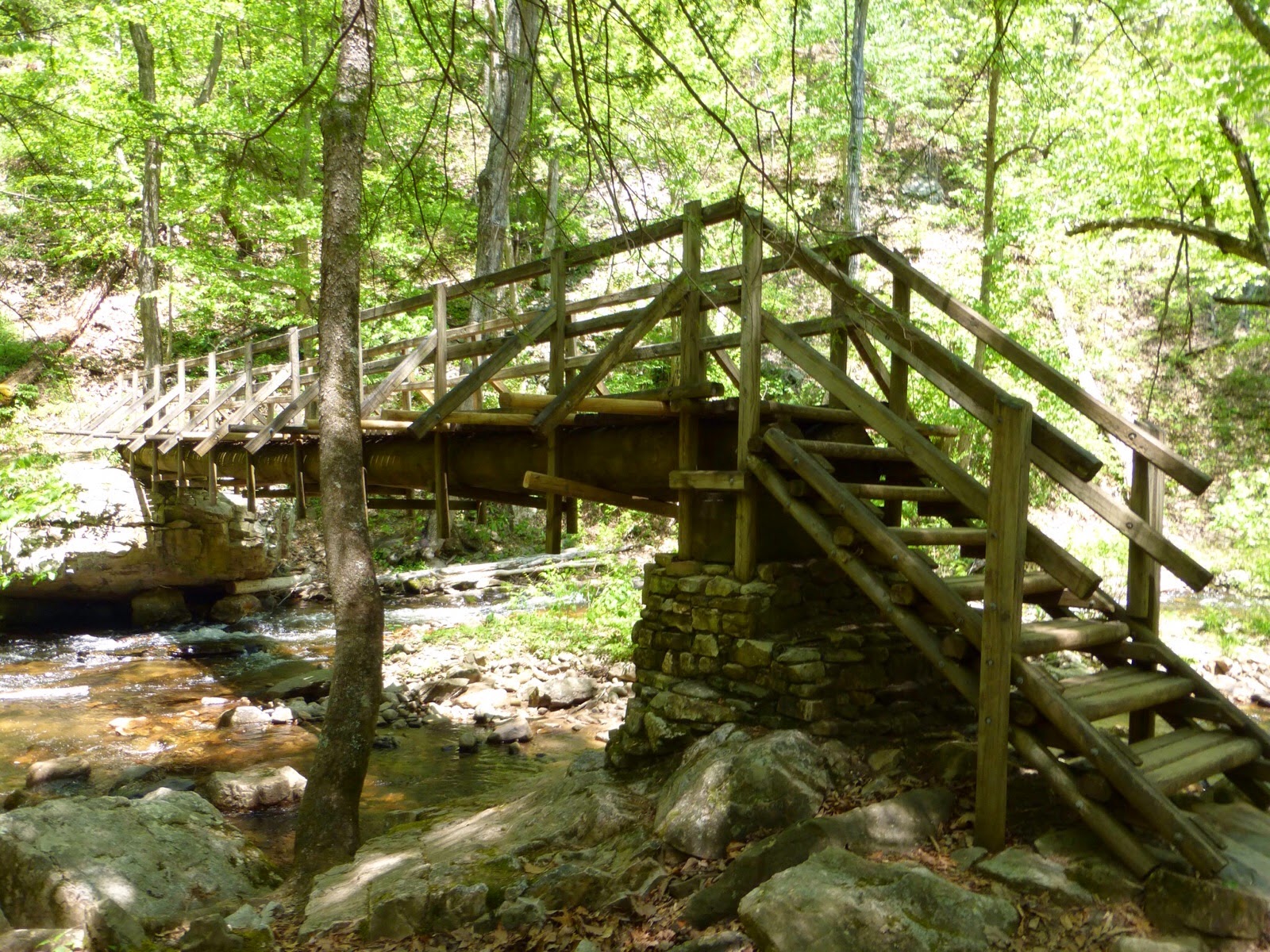 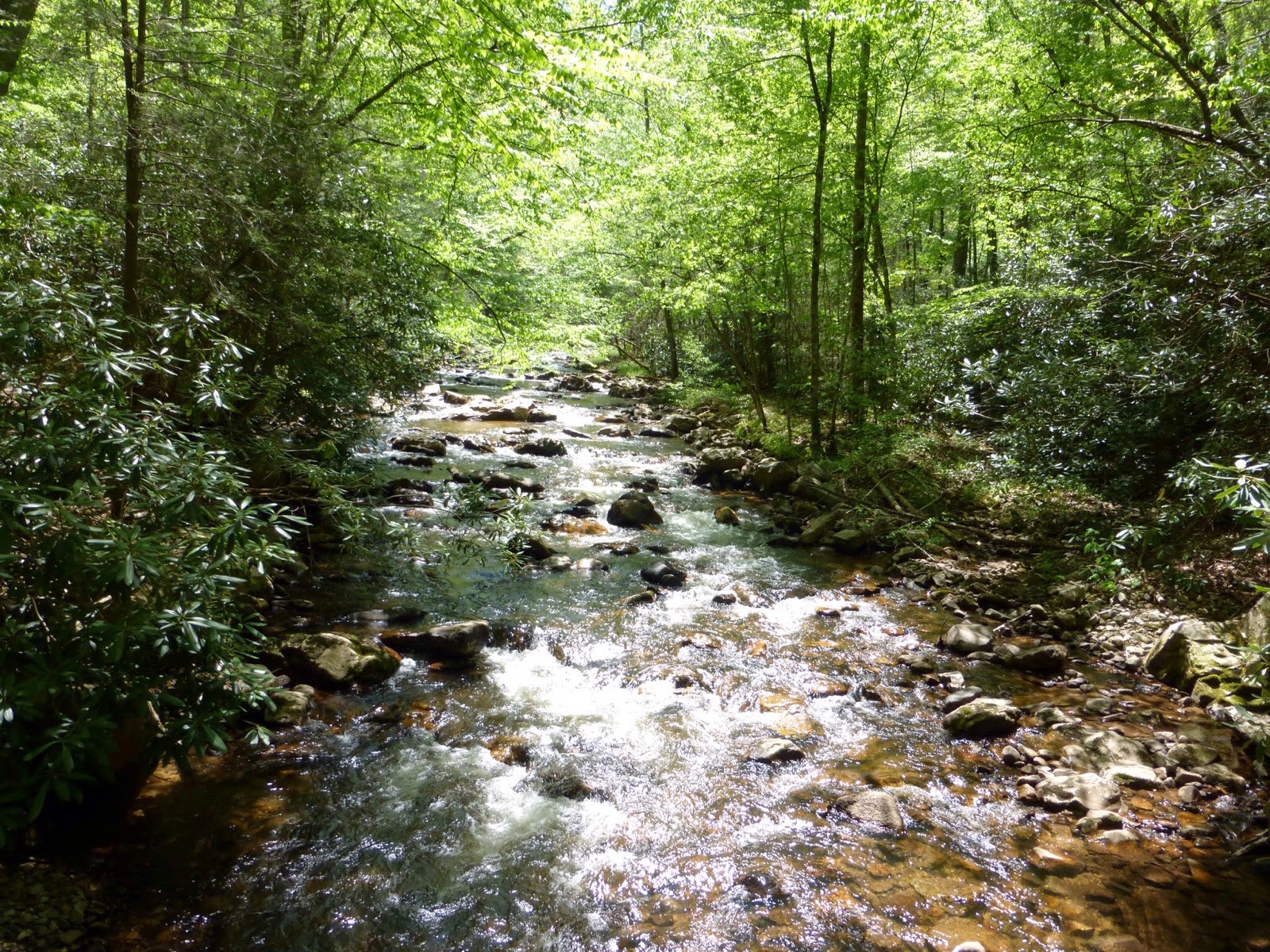 After the falls, there was a steep and hot climb up for four miles or so. That’s where I said goodbye to Happy Hiker and his friend Hemingway who were taking it slower. I was dripping sweat and easily downed a liter of my raspberry lemonade flavored water on the way up. So refreshing! By this time it was in the low 80s and humid. The heat is coming and this is just the beginning. I drank a lot more water today. The rhododendrons should bloom soon, but something else was blooming around them that I’m pretty sure are not rhododendrons. Also, a hiker placed a note on the trail pointing out some unique flowers they called lady slippers that are also around my campsite tonight. 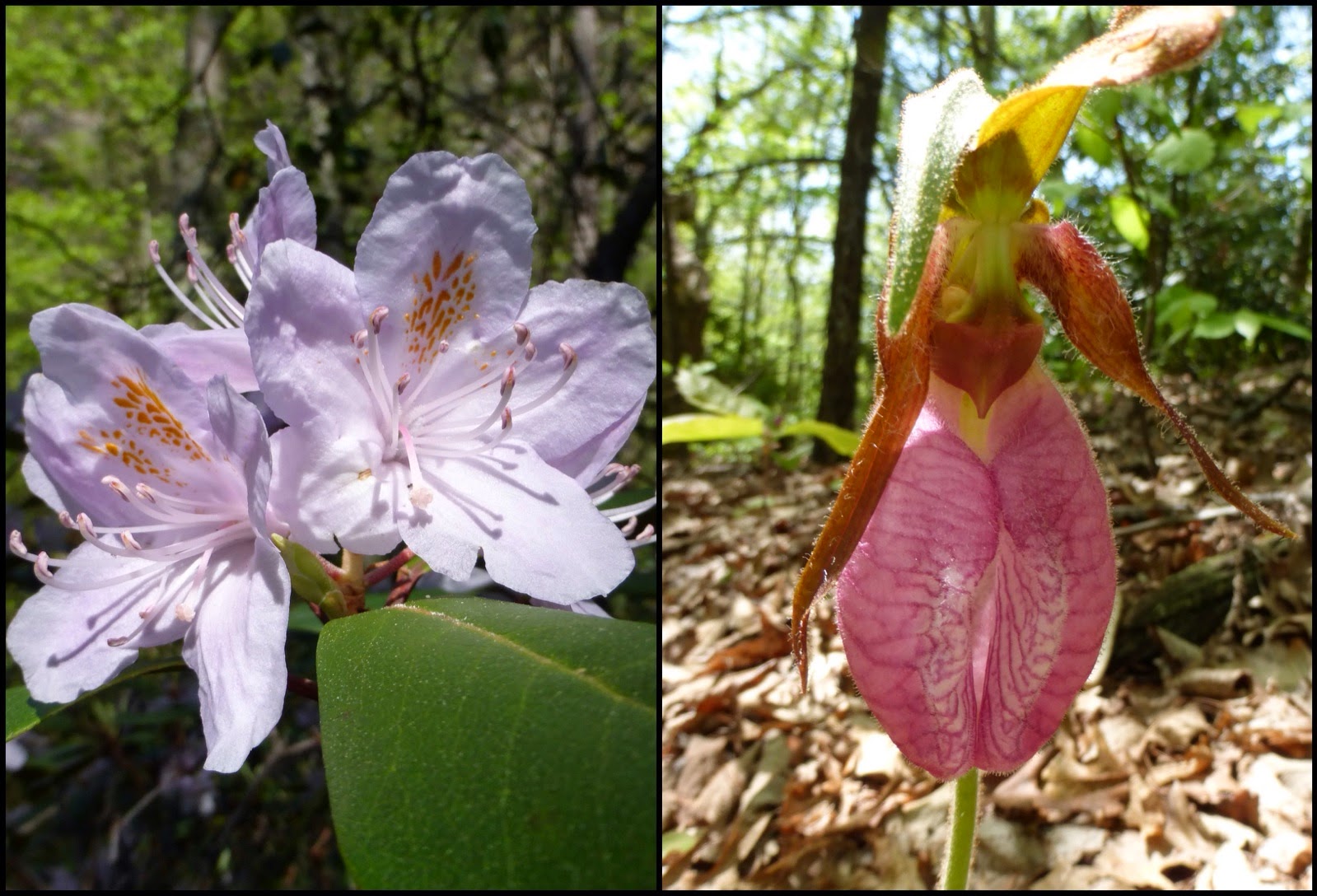 In the afternoon, I got to a recreation area with a beach that is also part of Watauga Dam. It is a large body of water and the trail went along it for a few miles. Here is a photo looking down on it and another one looking back at the hills I came down. 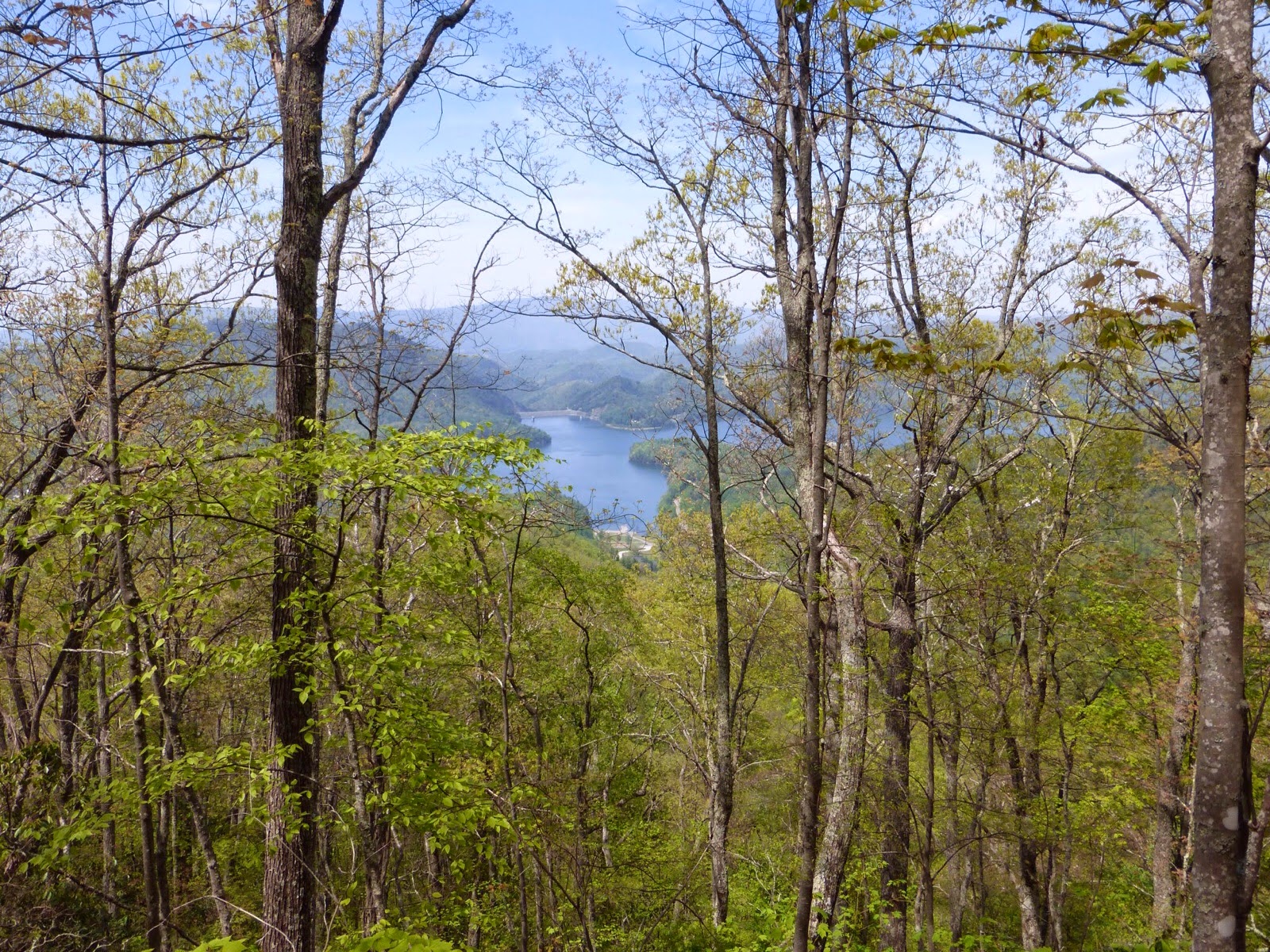 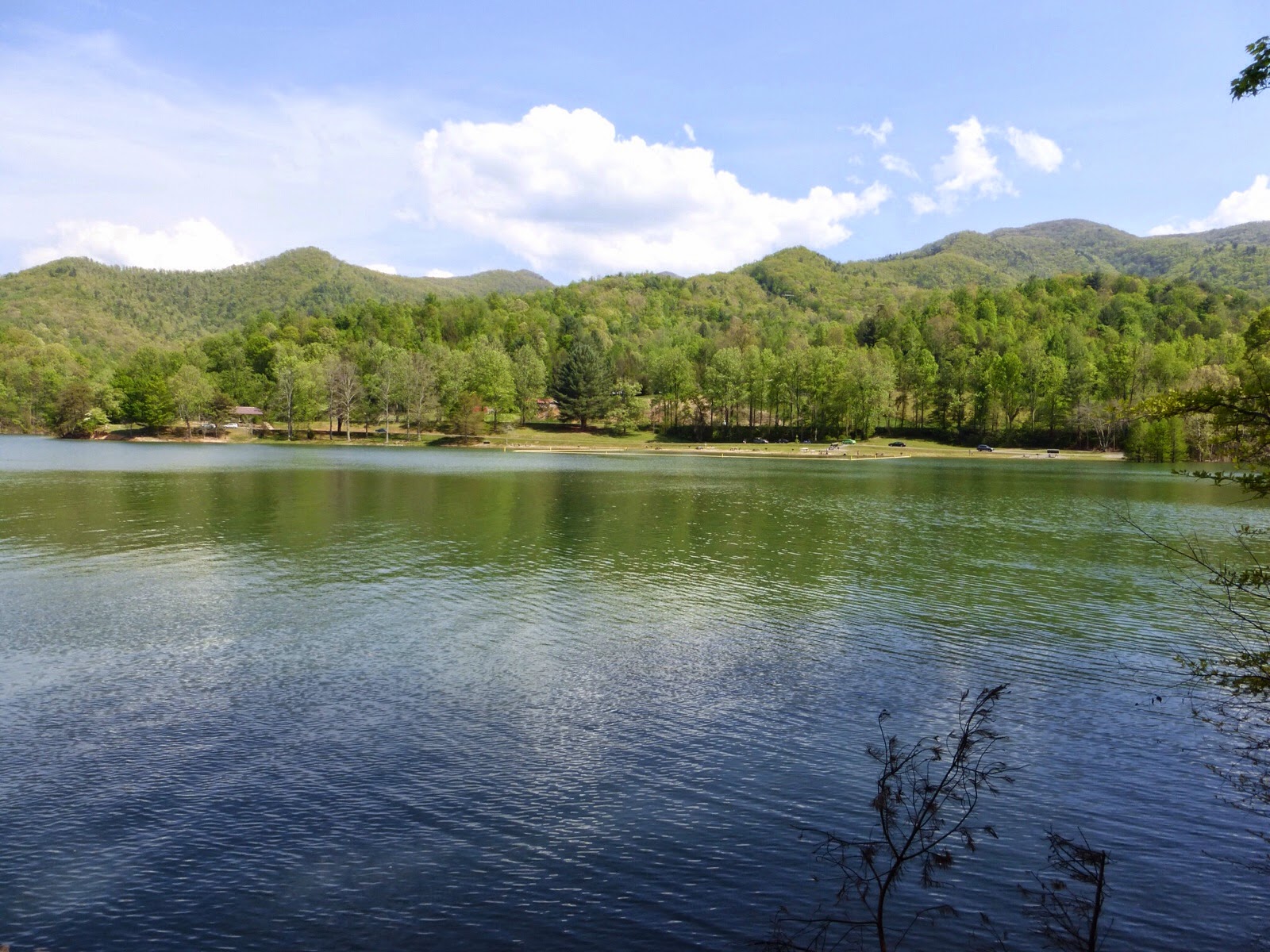 The beach part was trashy feeling in more way than one, but I enjoyed the other side as the trail wrapped around to the dam. There was a shelter for camping and then a steep climb with a gap with little camping. In the last 45mins of hiking I overlapped with a younger group of about 8 hikers who had apparently taken the day off to sit out the heat at the shelter or in town and then decided to hike the steep part in the evening. Some were more friendly than others as they seemed to have a bit of a clique going. One asked me about my mileage and said that they call hikers like me ghosts because we appear and disappear only to be seen again in registers as we sign in ahead. He was pretty excited saying he had only actually seen one other ghost. Haha, I’m a ghost!

I hiked up a couple miles and ended at 5:45pm at a site I’d had my eye on all day. Guthook’s AT Hiker app has small sites mentioned and noted this on and that it only had space for one tent. I hoped no one took it and aimed for it. It’s great! I’m just above the trail halfway up the steep claim with the water well below me. It like my own little peninsula cliff. It doesn’t show up, but far below me behind the trees is water. 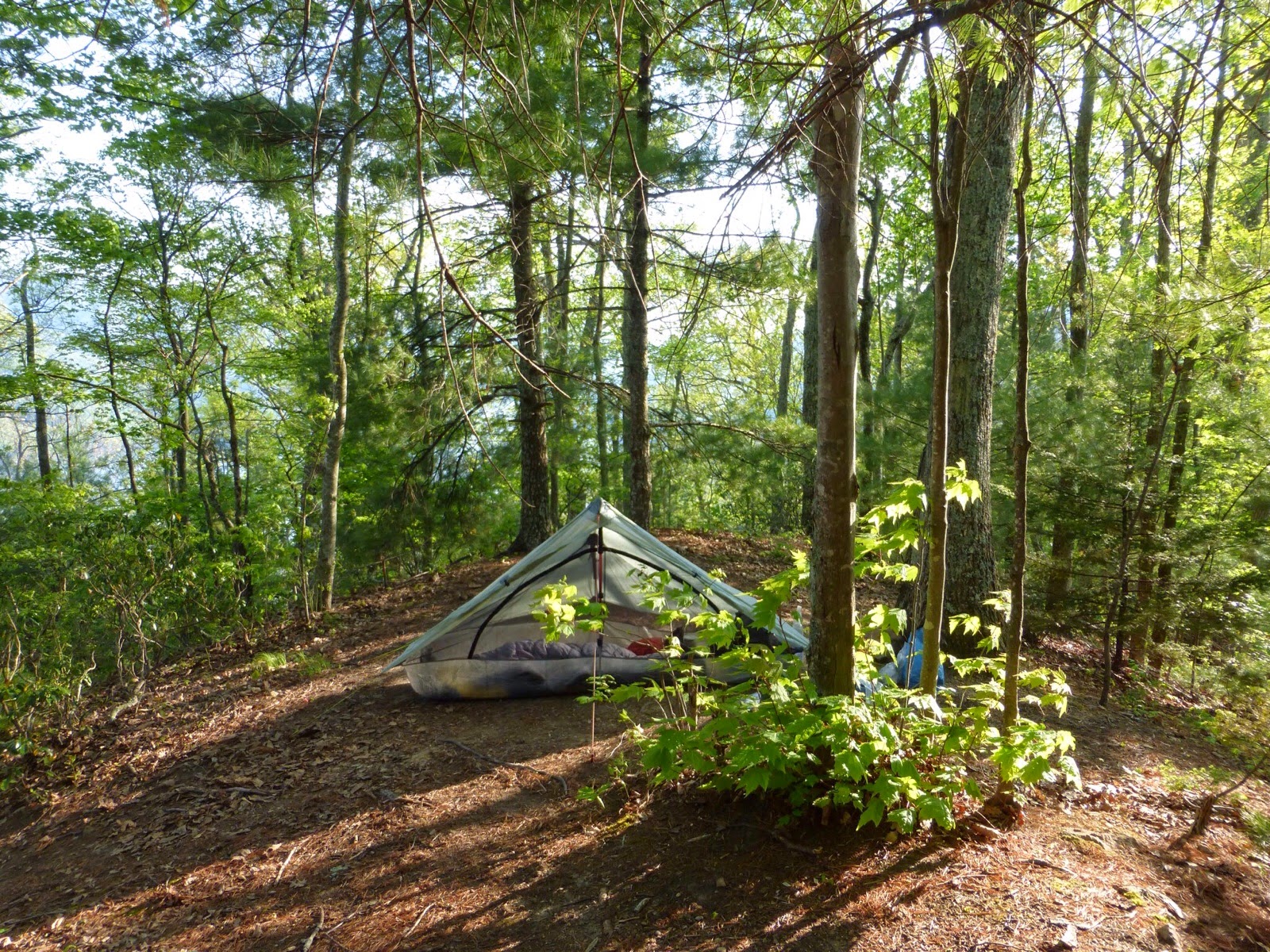 The best part…I have excellent phone reception and I get to watch Hulu tonight! I already watched some as I ate dinner and now I’ll do another Mindy Project episode and maybe New Girl. Seriously, does a day get much better?!