Day 22: Cruisin' With Others

I lounged a bit in the tent this morning and did some stuff online. Tomorrow will be the sixth day I’ve gone between towns and it was a great test for the new external battery I’ve been using to charge my iPhone and MP3 player. I’ve decided that this “brick” as I call it, is totally worth carrying and I even like it more than the solar charger, which is 4oz lighter. It’s the NewTrent PowerPak+ (11oz) and it should charge my phone 7 times. My battery usage varies per day, but I’ve been able to use both my phone and MP3 player freely the past five days while the meter on the PowerPak+ shows that it is still over 1/3 full. Sweet! NewTrent also sells a slightly smaller version with less charge that weighs just 7oz too.

So as for this morning, I got to hiking by 7:10am. Again, it was a morning of spiderwebs, argh! My strategy of holding the poles up is helpful, but there were so many this morning that it created a web between the poles that would then catch leaves and bugs and also create a flag of webs waving towards me. Today I had the joy of many spiders attached to the webs that would dangle in front of me or even crawl on me. It just ruins my morning hiking! I’m thinking of trying the bug net tomorrow and possibly long sleeves the first hour or two of the day despite the heat. I’ll keep you all updated on operation morning spiderwebs. Today’s hiking was very smooth and the view was almost the same all day. Walking through a thin forest on a bit of a ridge so there were views on either side. I seriously only took a handful of pictures today.

The elevation changed little so the foliage remained the same and the trail was fairly straight with much less winding curves. For the first few miles the view to the east was the Watauga River. It was nice to get glimpses of the low lying fog along the river this morning. 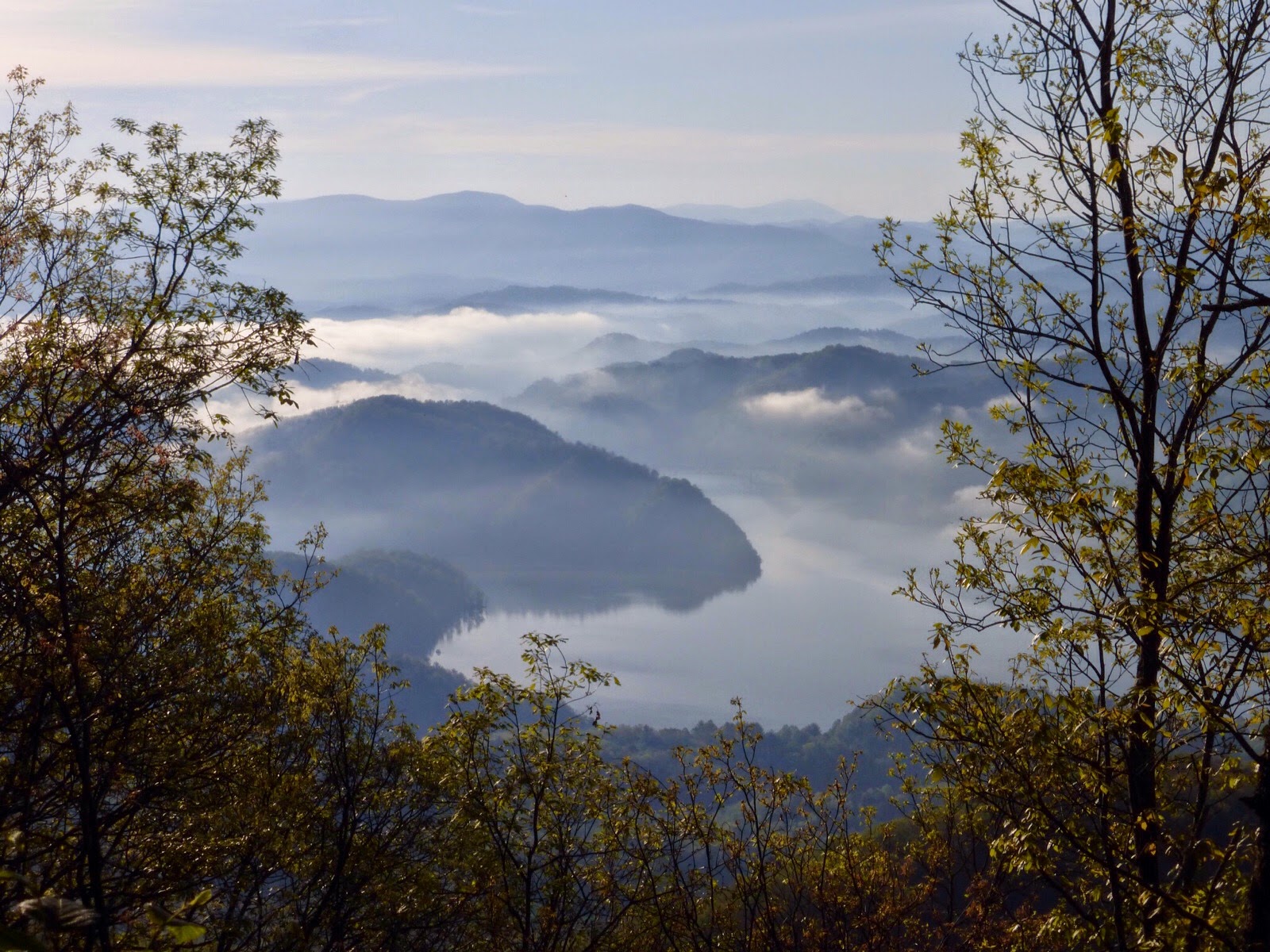 After a couple hours, I came upon a shelter that was packed with a cheerful group having breakfast. Some were section hikers, but they said there were 30 camped near there last night. A bit further I caught up to the crew I saw last night who had decided to hike into the evening. Two of them, Simba and Shane, had their sights set on town and doing over 33 miles. This is the first stretch of fairly level trail and they were excited for the challenge. I ended up leap frogging with them the rest of the day so this was the first day I met hikers who could keep up the same pace as me for the whole day. I was happy about that considering how uneventful the hiking was. I should see more hikers doing bigger miles through Virginia which has an easier elevation profile.

Shane hiked a bit faster than Simba so they hiked separately and I spent a brief amount of time with each of them before hiking on at a faster pace until lunch. Right before lunch I came across my third trail magic of the trail. A nice cooler and snacks from a young girls mission group. It was all sodas which I don’t drink, but I did get a nice Little Debbie snack. You can see other hikers stopped there too. 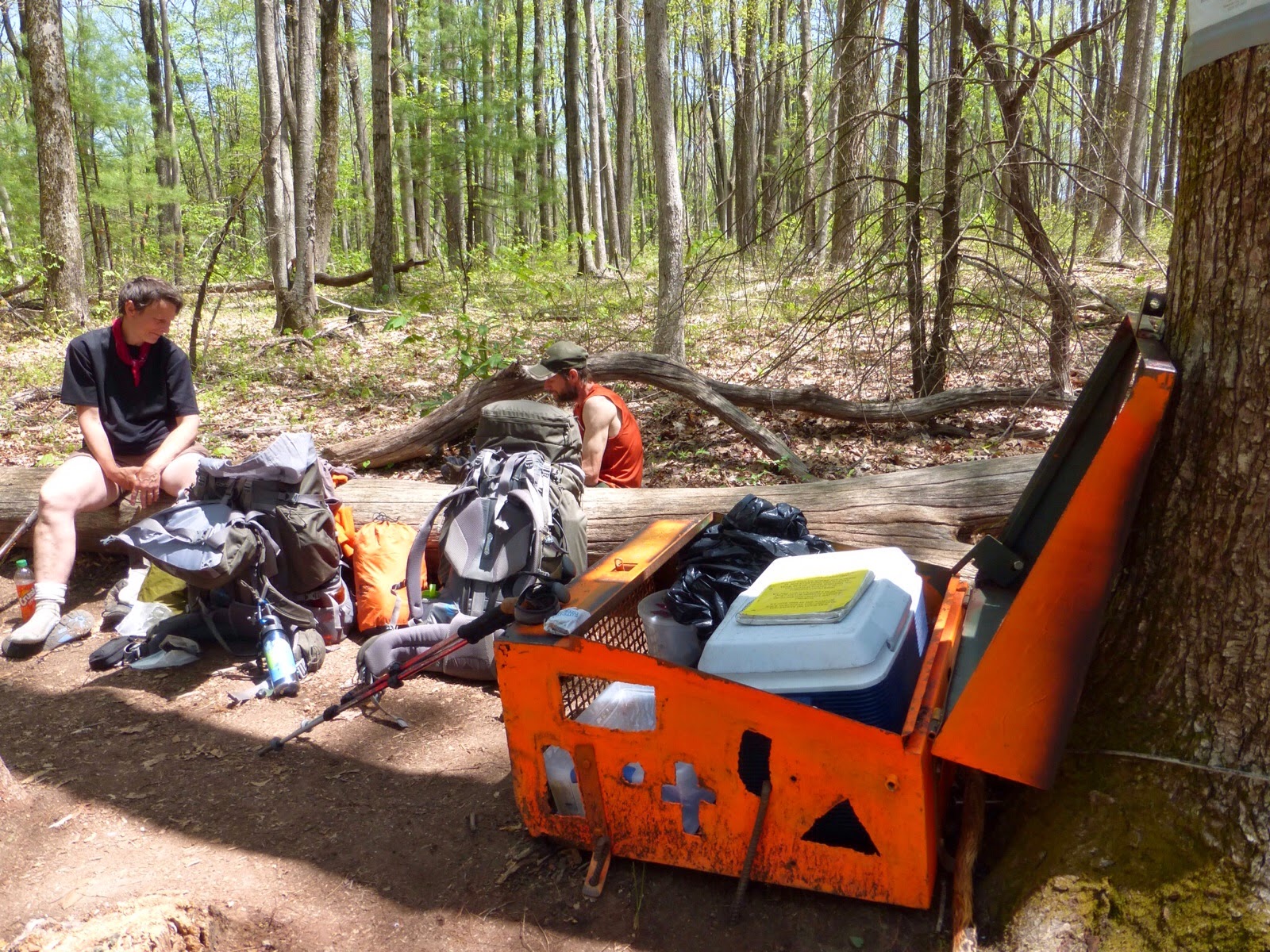 While I stopped to eat lunch a bit later, Simba and Shane each passed focused on getting to town. I caught up to Simba about an hour after lunch and she was losing steam so I asked her if she wanted me to talk to her to distract her. She appreciated it and we hiked together a couple hours it seemed. She’s 19yrs old and is from North Carolina so she’s had a lot of distractions and hasn’t been hiking as much as she’d like. She said she wanted to feel the burn and go for it today. We passed Shane while he was taking care of business and came to a road where a man was offering water to the hikers. It was in the low 80s with a light breeze all day, so it wasn’t too bad at all. The water sources were mostly off trail today so it was nice to get a refill without having to filter off trail. Here are Simba and Shane with the man giving out water. 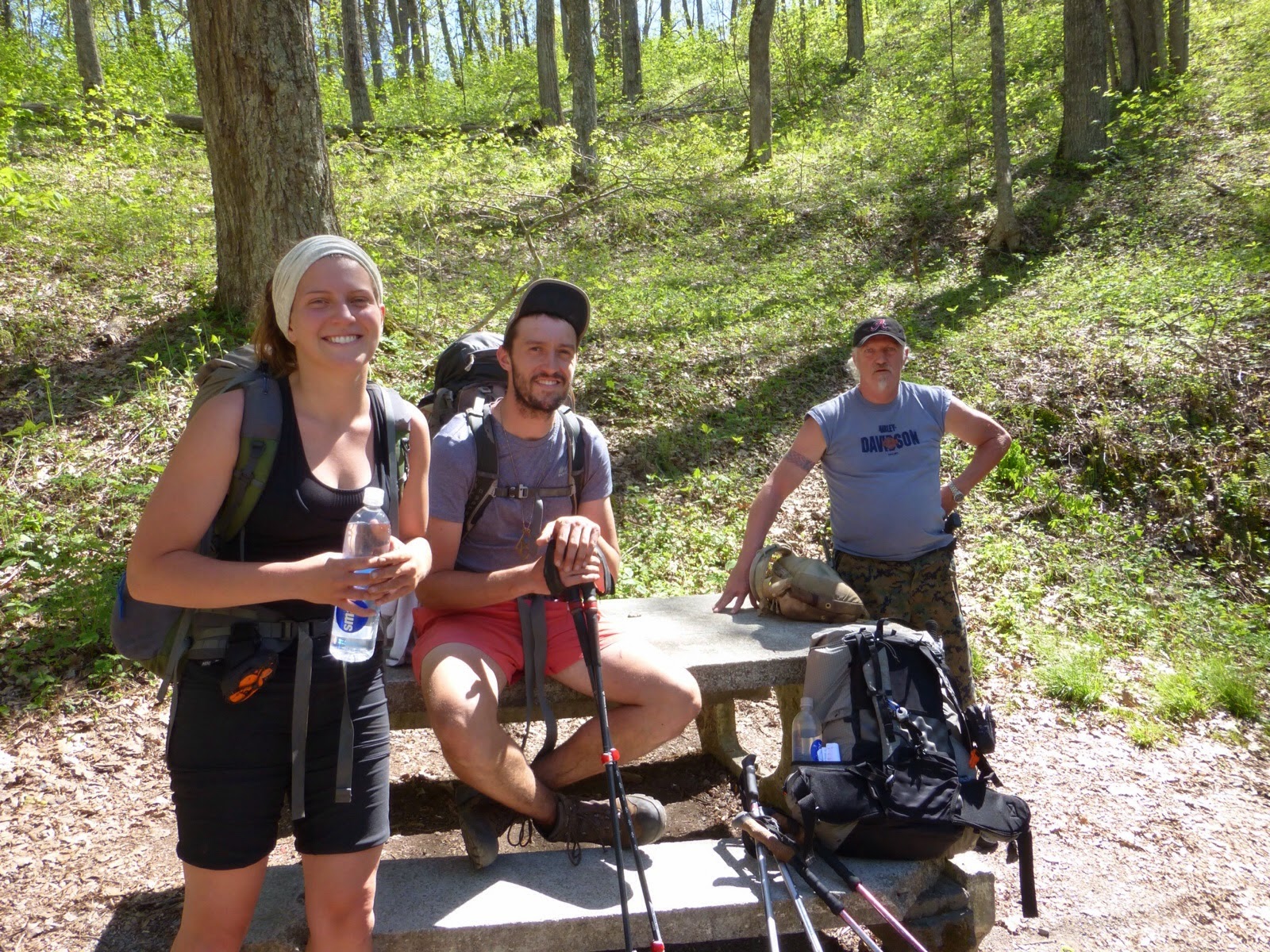 At bit later, Simba slowed and I hiked with Shane for the last part of the day. He is 26yrs old and is also from the area (Virginia) and has been on and off trail a lot and was in the mood to hike more to make it to town. We all got water at the last location 10mi from town and Shane noticed his phone was out of battery. The PowerPak+ to the rescue! I was able to give his phone the charge it needed to get to town. I stopped 9mi before town at 6:15pm to realize I had done my biggest day so far of 28.3mi and it hardly even felt like it. The day went by fast and it will be nice to have a short day into town. I’m enjoying this solo camping too! I know there is a large crowd a mile back at the shelter, but this is much more relaxing for me. 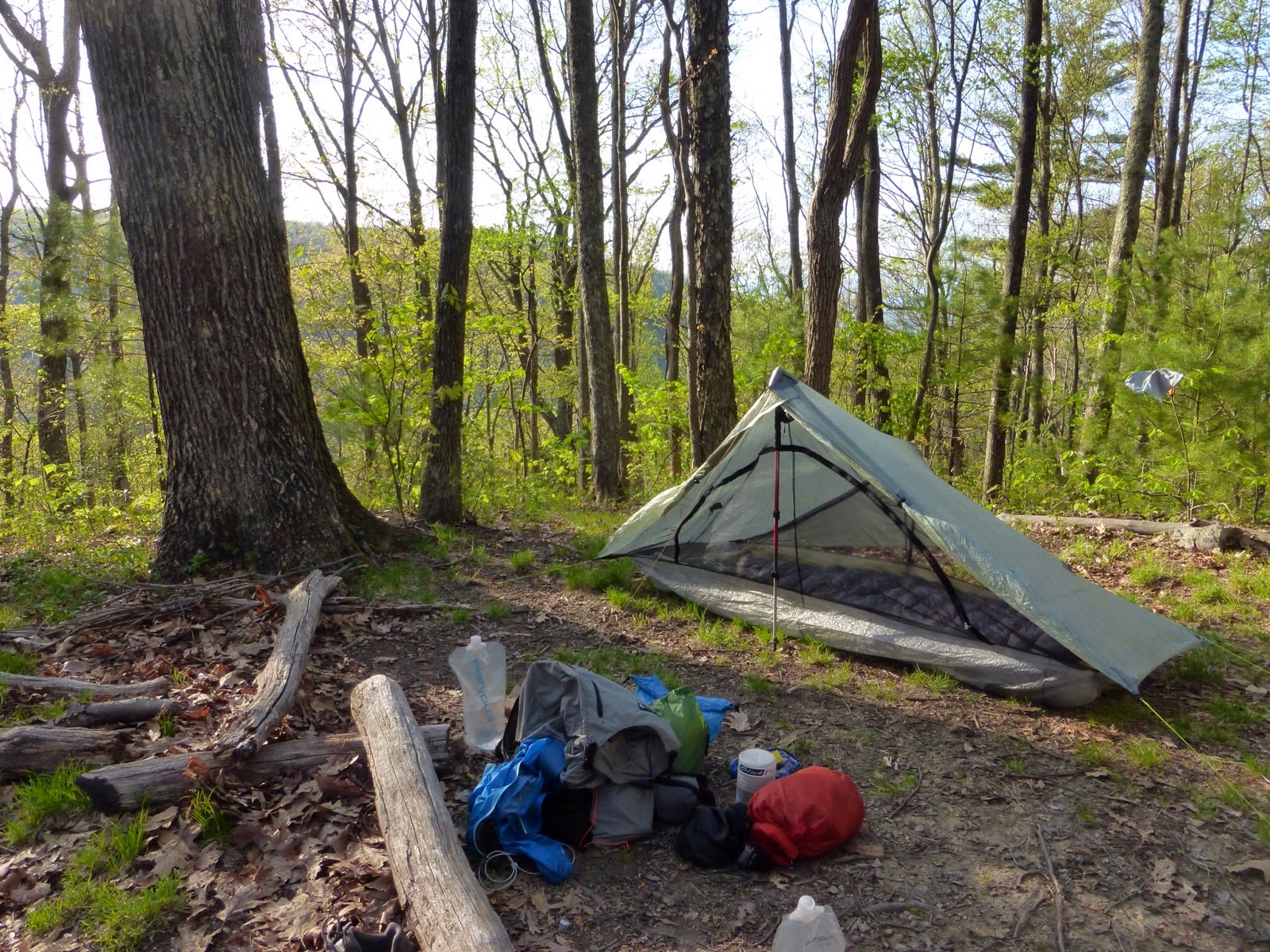 Shane and Simba hoped to have enough gas in the tank to make it to town around 9:30pm. I may see them up the trail sometime. On a side note, it was pointed out to me (by my fellow perfectionist sister) that I’ve had a lot of typos. Sorry about that. I’ve been lazy this week about reading back over what I write and autocorrect can have a mind of its own sometimes!