Last night at 10pm a group of three hikers came through the camp and setup for the night. They were kind enough to go to the opposite side of the campsite, but they were a bit disruptive. We didn’t see each other, but exchanged trail names. That’s definitely the latest I’ve had anyone arrive at camp. This morning I woke up pretty early and tried to lounge a bit and then just got going by 6:50am. Within an hour, I got to the top of the first climb and got enough service to post the blog and do some emailing and phone calls. While I was doing that, Uffda walked by. He must have gone into town because I didn’t see him the rest of the day. Today was a very bland day of hiking and I didn’t see many northbounders. I saw a lot of southbounders doing section hikes to Damascus because the big hiker gathering called Trail Days is this coming weekend. I hiked alone 90% of the day and I had many thoughts running through my head. 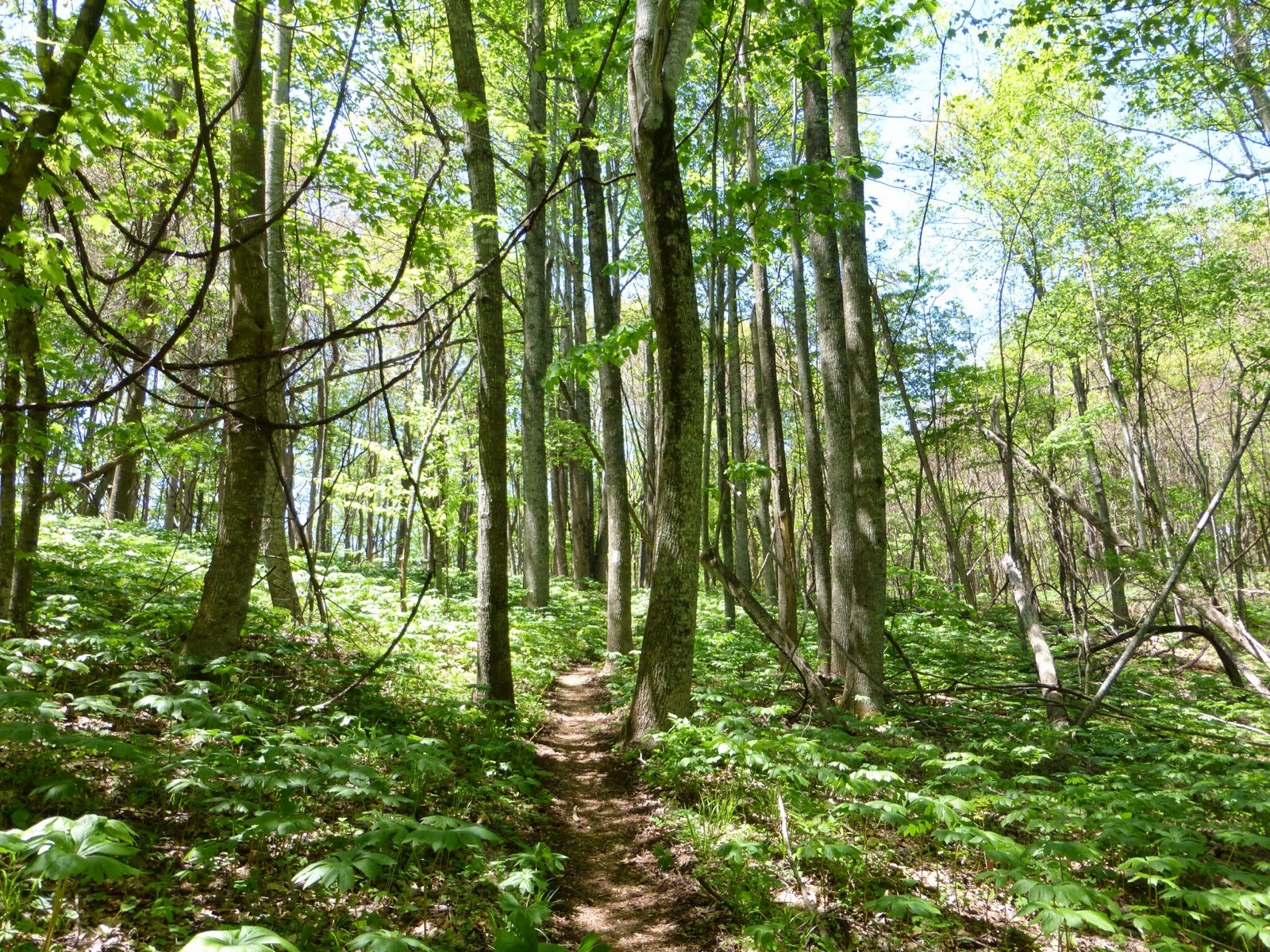 I thought back to my very first backpacking trips. My twin sister and I would get to sleep in the backyard in a tent when we were little, but never went camping with our parents. We had a big orange power cord that stretched from the house to the tent and watched tv on a small portable tv we had bought with arcade tickets after a year or two of saving them up. Yes, I was always meant to be Wired! My first and only camping trip as a kid was a one night trip in middle school with the conservation club.

It wasn’t until my first few years out of college that my sister and I went on our first real backpacking trips. We bought our external framed packs and our good friend Zane was the first person to take us on multi-day backpacking trips. The first trip was to the Porcupine Mtns with Zane’s twin in the Upper Peninsula of Michigan. 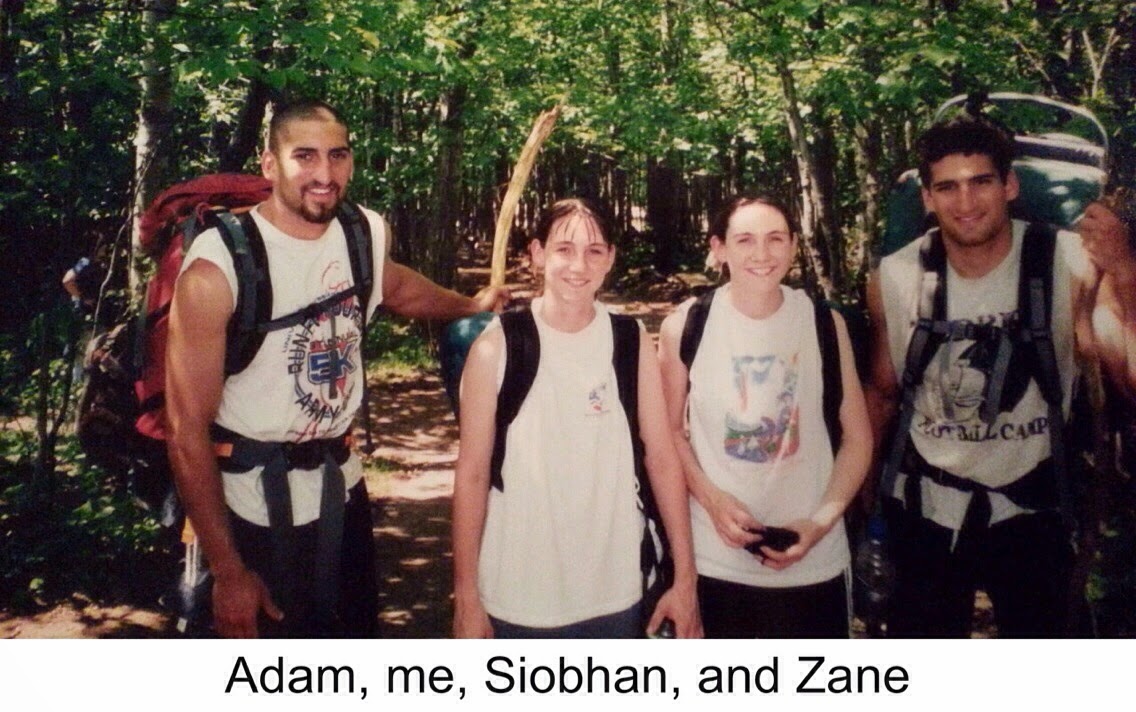 Then we did another trip in the Linville Gorge of North Carolina when Zane lived there. 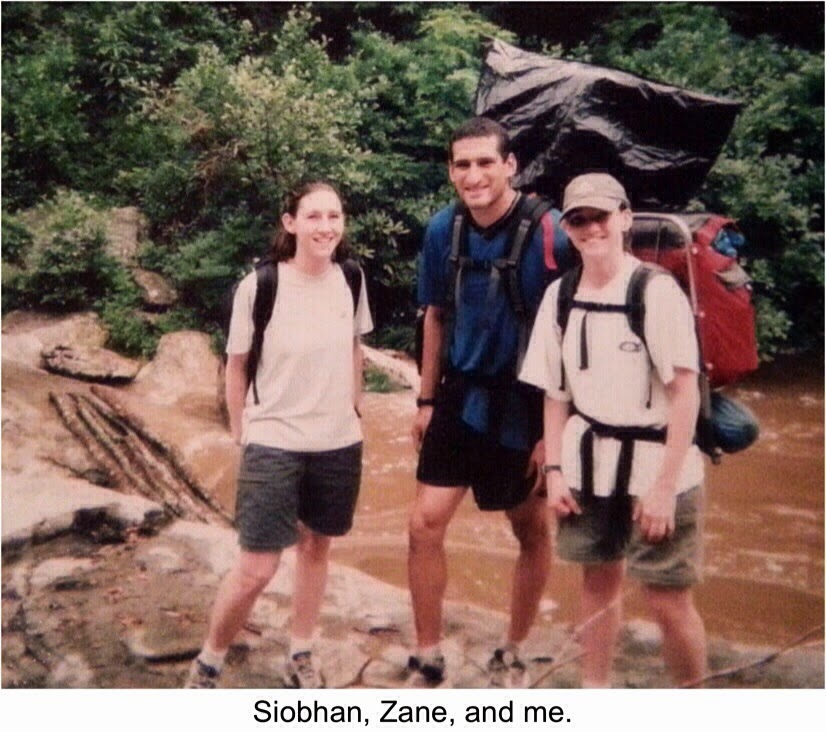 Zane even taught us the trick of a triple layered PB&J sandwich. Three slices of bread with the middle slice smothered in jelly on both sides and the outer ones with peanut butter so it didn’t get mushy on the backpacking trips.

Zane is more than a friend to me and my sister. He is family and like a brother. He’s also an identical twin and we have known each other for 20yrs having gone to high school and college together. We didn’t just go to school together, the three of us made quite the team during those years. Supporting each other in classes and working hard to join every high school club for a better chance at a good college. Meanwhile, all three of us also worked jobs to save up for school. We all worked our own ways through the University of Illinois and even worked at the same jobs at an after school program with kids and at the campus bookstore. We would live together in a cramped converted garage for short periods when campus dorms were closed and we all stayed on campus to work. We always challenged each other and pushed each other academically and athletically. Zane knows us better than anyone because he was there each day during those formidable years. After all we went through together, Zane is family to us and we are the same to him. There aren’t many people I would undoubtedly trust with whatever I needed and rely upon in life, but Zane is one of them. He is one of the very few who knows me and what it took to get to this point today. Even though we live further away from each other now, we are there for each other. Zane stood up in Siobhan’s wedding and we gave final approval when he found his wonderful wife. I wouldn’t be the person I am today, and may never have become a backpacker without Zane’s support, influence, and friendship.

Yesterday morning, on top of a fogged in Whitetop Mtn, as the wind whipped around me, I talked to my sister and found out that Zane had committed suicide. It was shocking and came out of nowhere. I went through the range of emotions of shock, disbelief, and sadness. By the afternoon, more developments came to light that Zane’s suicide was after days of running and hiding from police. It is hard to believe this is the same person I know and there are still DNA tests to be done, but he is suspected of a recent string of break-ins and sexual assaults on young women over an extended period of time. I didn’t mention this in yesterday’s blog because I was still trying to wrap my head around it. Then this morning I read the detailed accounts of the break-ins and saw video footage of part of the police chase with Zane running into the woods…yes, into the woods. It has put images and thoughts in my head that I can’t shake. I wasn’t sure if I should mention it, but it is where my head is at yesterday and today and maybe writing it out will help. There are so many conflicting thoughts and emotions and I just don’t want to think about it at all. Being alone in my head all day isn’t helping. I know it will take time, but I just had to explain.

My current emotion is that I’m just pissed and if this is all true, I wonder if anyone can ever be relied upon or trusted in life. I’m already on the fence about people in general and this makes me want to jump over to my hermit side! Is there ever a way to really know someone? How could I know someone for so long and not see this? There wasn’t even a blip on the radar. My sister even talked to him the day before he went missing with his wife by his side and him as his regular happy self. I’m just mad and don’t like this negative energy so I’m hoping venting will get it out and away from me. I haven’t eaten what I should the last two days and even had stomach cramping and almost got sick in the late morning. I know it’s all related and I want to get past it and get it out of my head. Then again, I look back on the last 20yrs and for a good portion of it, Zane was part of it and positively influenced my life. I don’t know, it all sucks and is just looping through my head all day. I know it will pass in time, but I wanted people to know where my head is right now.

Okay, I already feel better having written it out. As for the events of the day, there were no views at all today to distract me like yesterday. I did come up on some nice trail magic provided by a local church with a nice shaded spot, chairs to sit in, and a great variety of snacks. 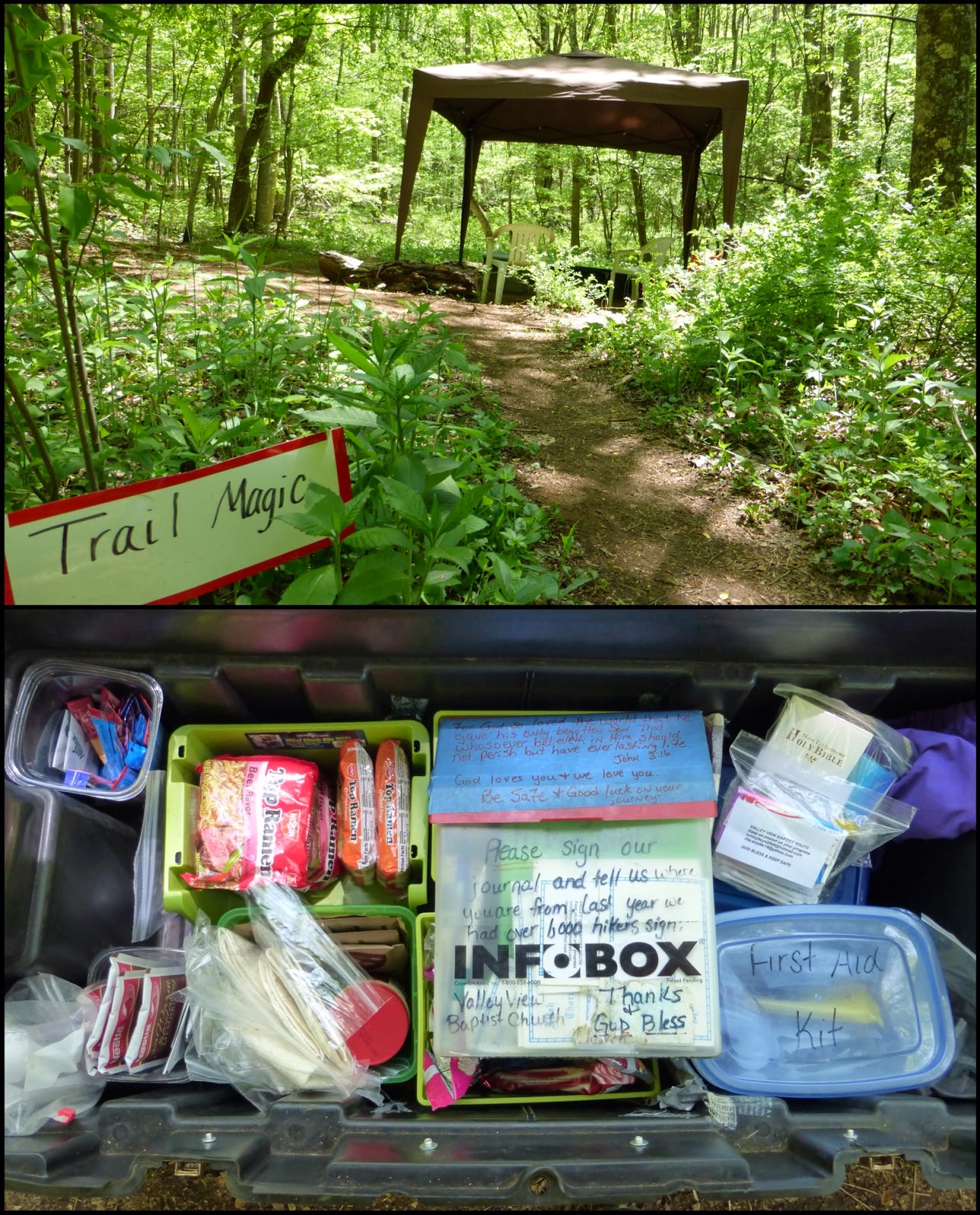 Then towards the end of the day I came up to Partnership Shelter. One of the nicest shelters on the trail. 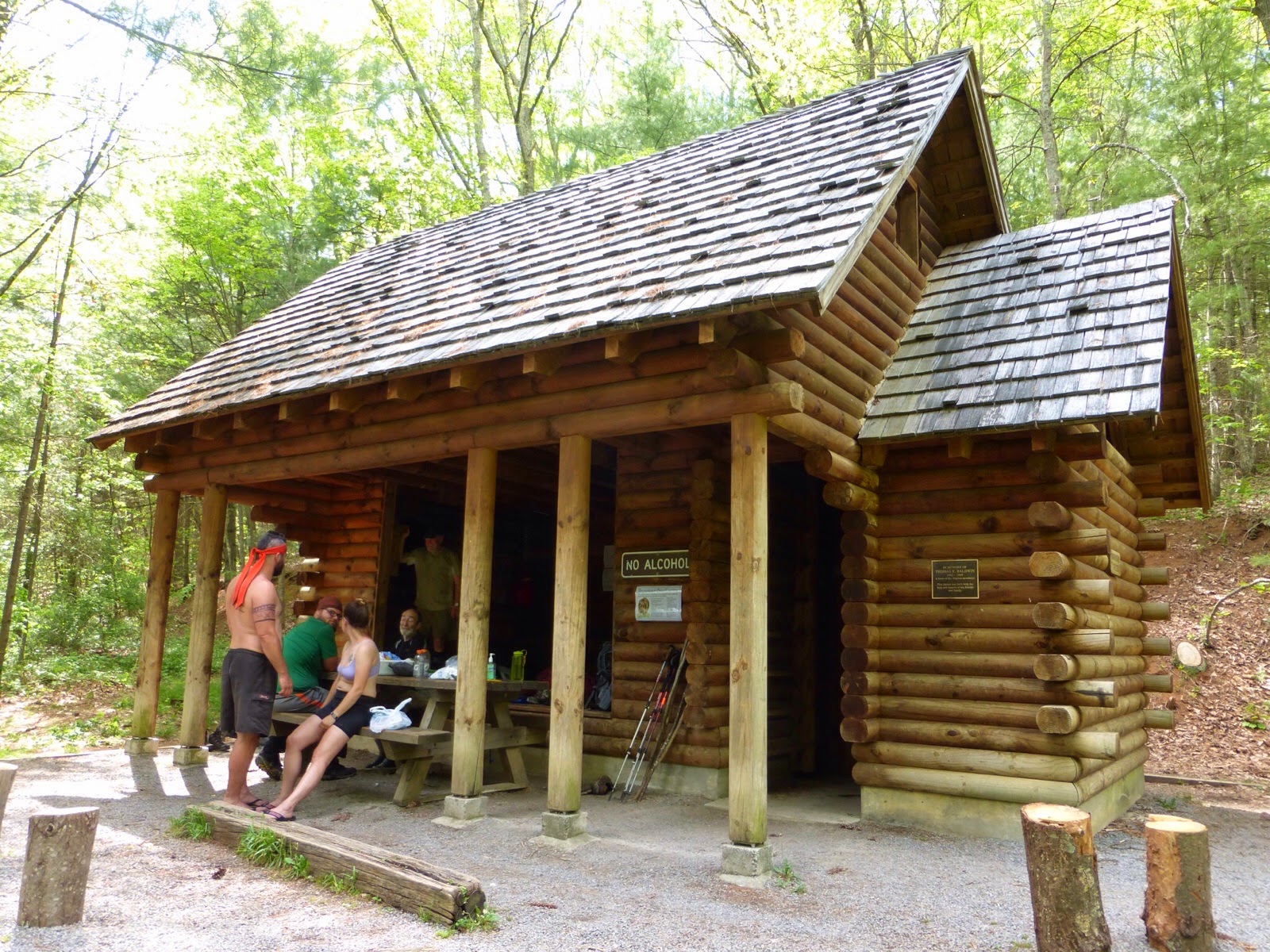 It is also close to a major road and one of the shelters where people can call to have pizza delivered. I was not in the mood, but there were hikers there that had ordered a pizza. With the fog around them, I thought I was at a Snoop Dog concert. I soon noticed the name of one the hikers on his bandana and realized that it was the three who had come into camp late last night. I asked how they got to the shelter as I had hiked over 20mi and they sheepishly admitted to hitching up and skipping the section. I hiked on a couple hours further and ended up camping with a nice man named Blueberry Bear. 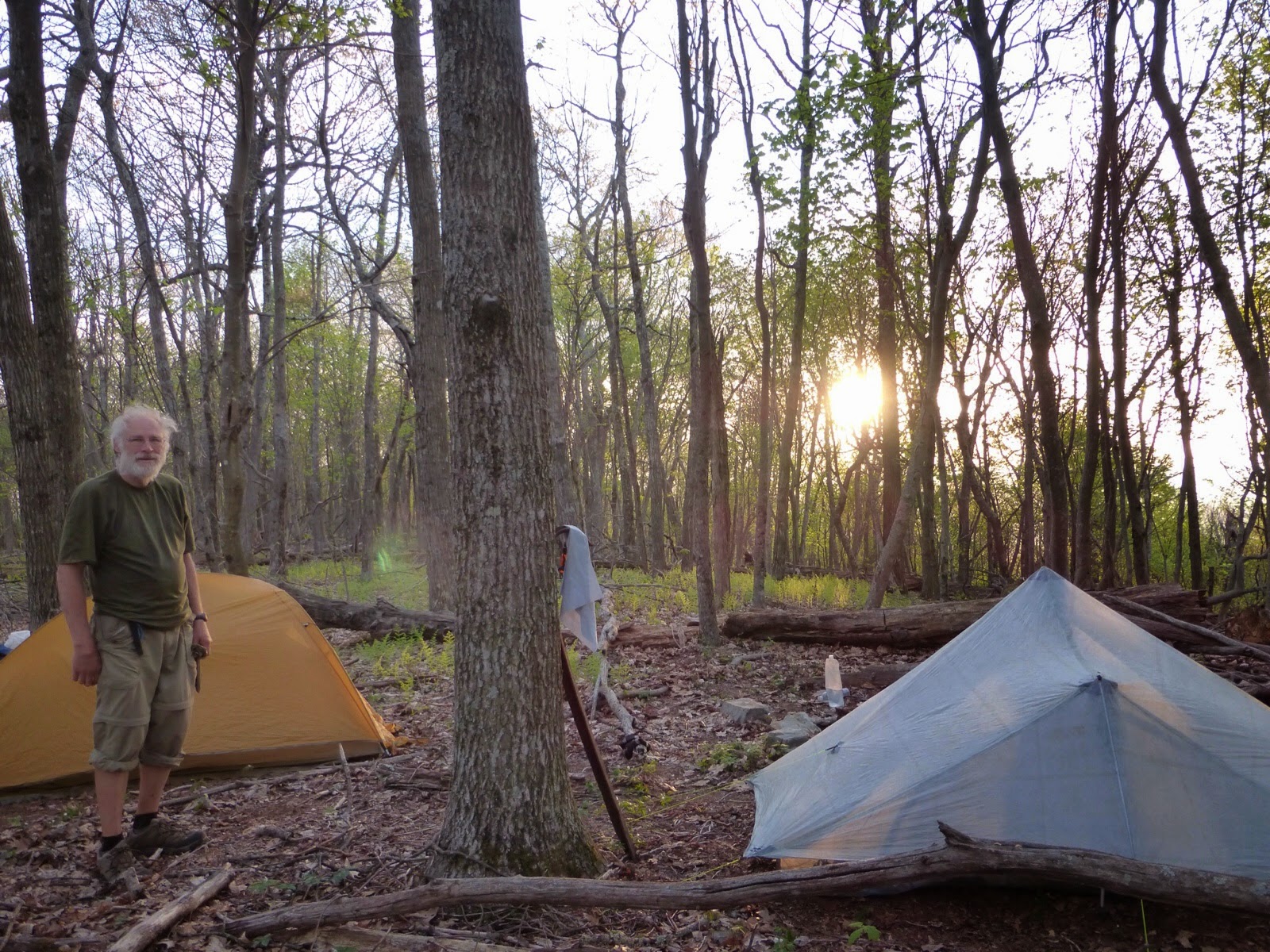