This morning was cold, but not as cold as yesterday. We got started at 7am and it was about 40 degrees and stayed in the 40s a good portion of the morning. The hiking was nice and mostly level. After a couple of miles, we came to a nice open area at Rice Field Shelter with a great view of low lying clouds as the trail continued on up the hill.

Most of the day was pretty much level hiking which was really nice. It was quite brushy and the first half of the day was somewhat rocky in parts and had a lot of fallen trees, but they were smaller trees so stepping over or around them wasn’t too difficult. There was even a second viewpoint before lunch that was nice. 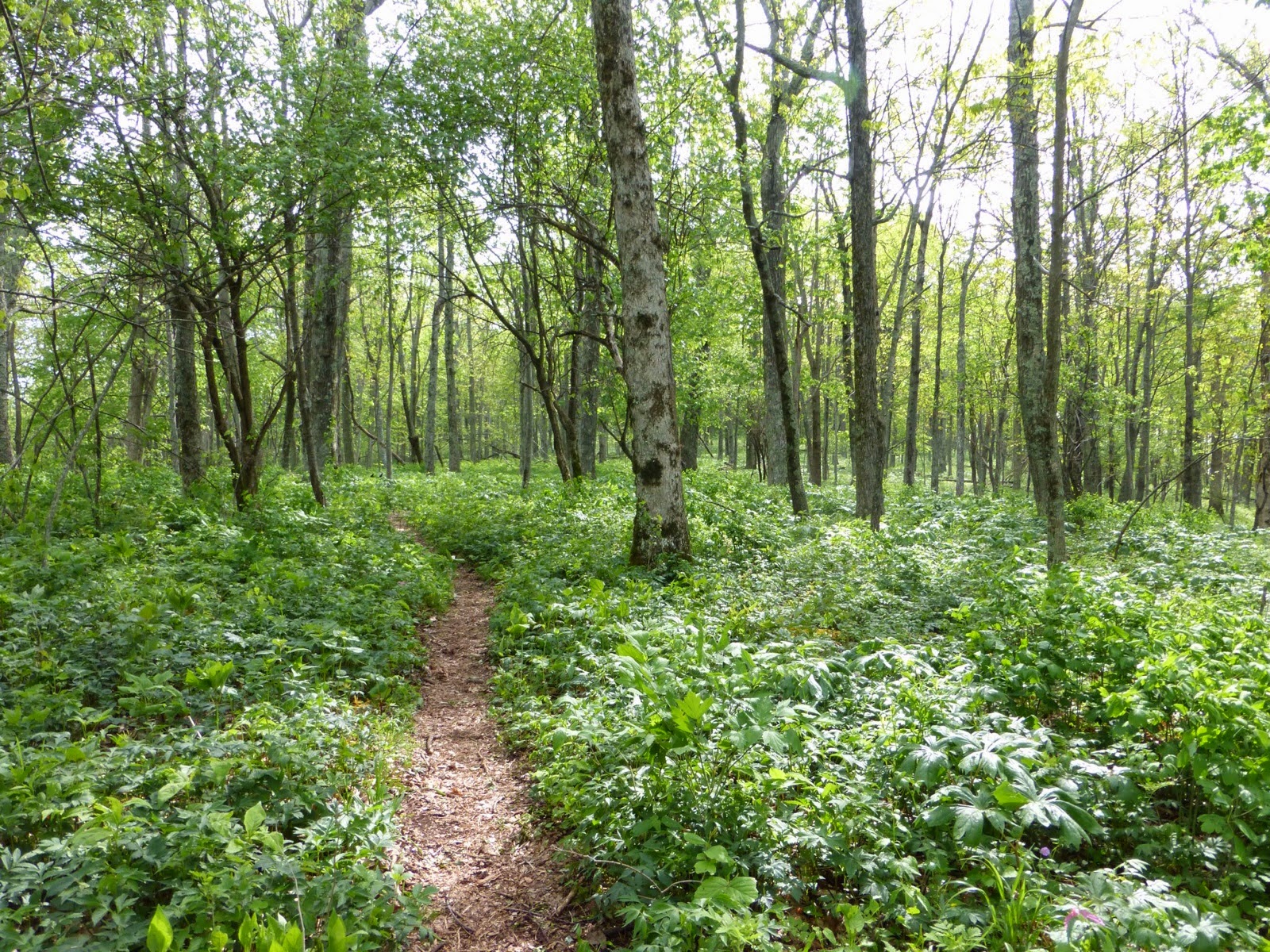 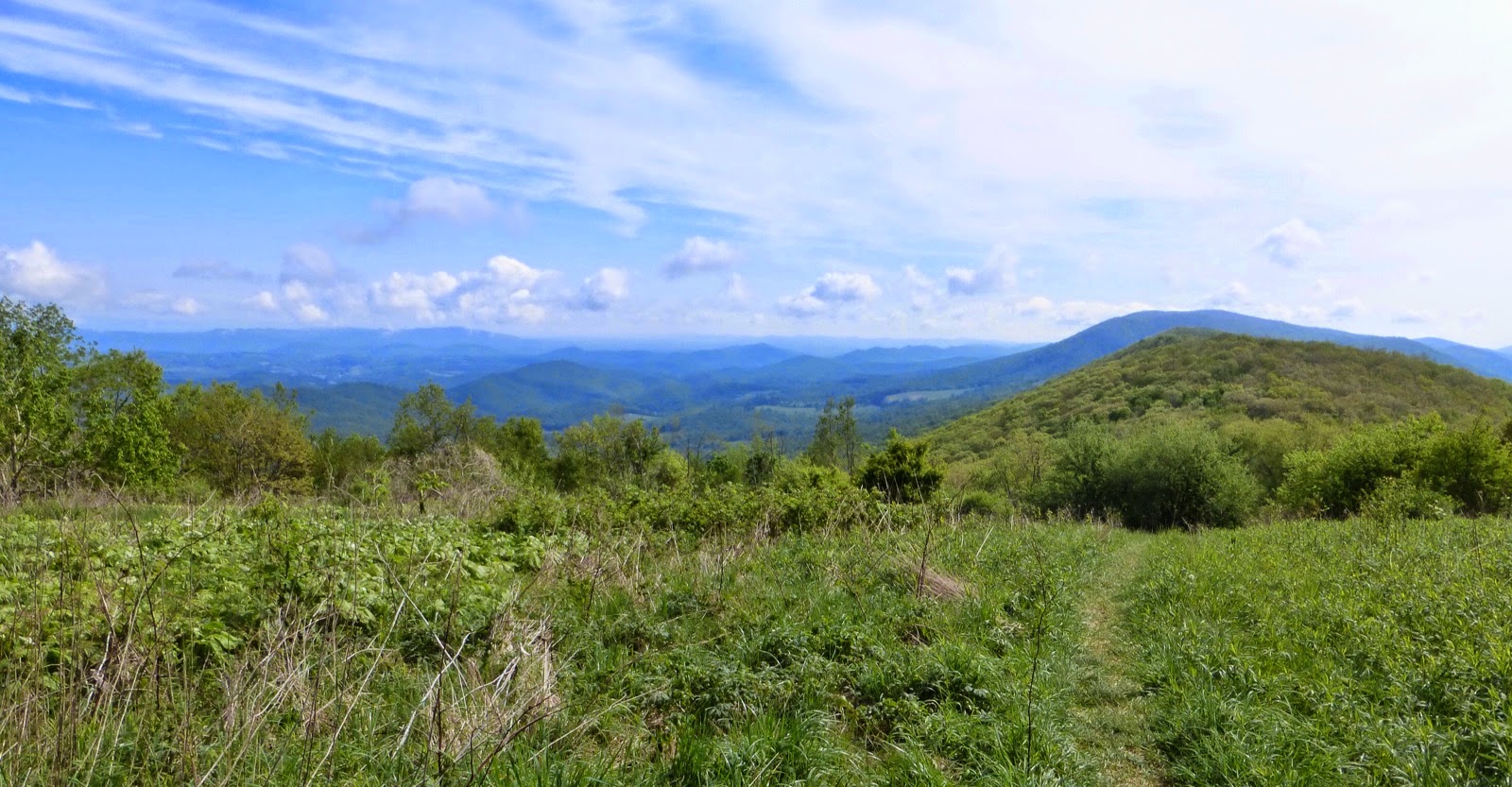 I had my jacket and gloves on for much of the first half of the day and then it got into the low 60s in the afternoon which was nice. We saw more hikers both north and southbound today and there were many short conversations. More hikers should be returning to trail tomorrow as many went down to Damascus for the annual event of Trail Days where the community and hikers, both past and present, gather with many vendors and events. Basically a big party. We had a relaxing lunch and talked to a couple other hikers and it was a pretty relaxed morning. The big event of the day was a place called The Captain’s. It’s the home of a trail angel that has a house that is across a creek from the trail. He has a swing on a pulley system for hikers to ride on to get to his house. We just had to check it out. Here we are going across. It was fun. 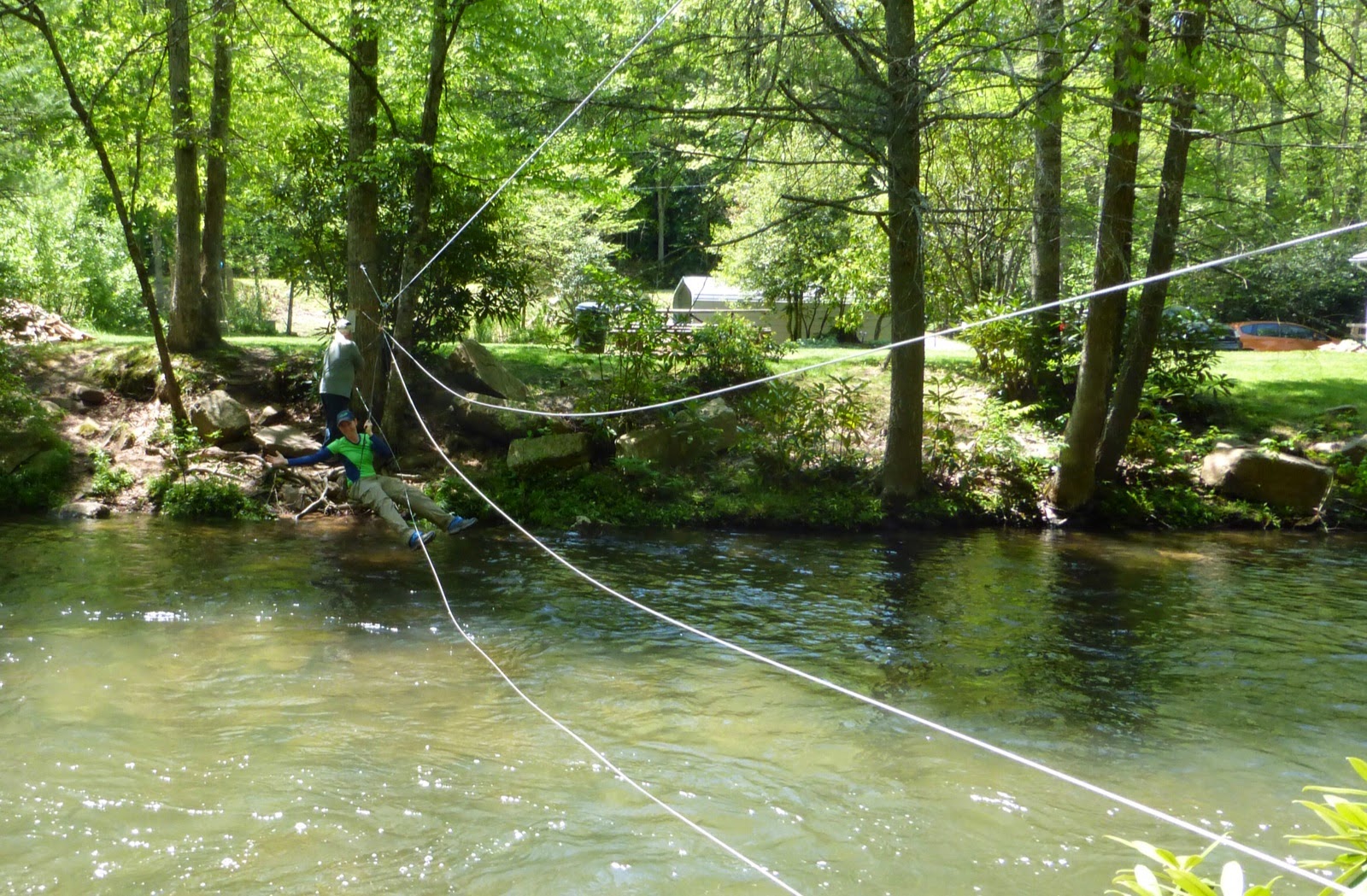 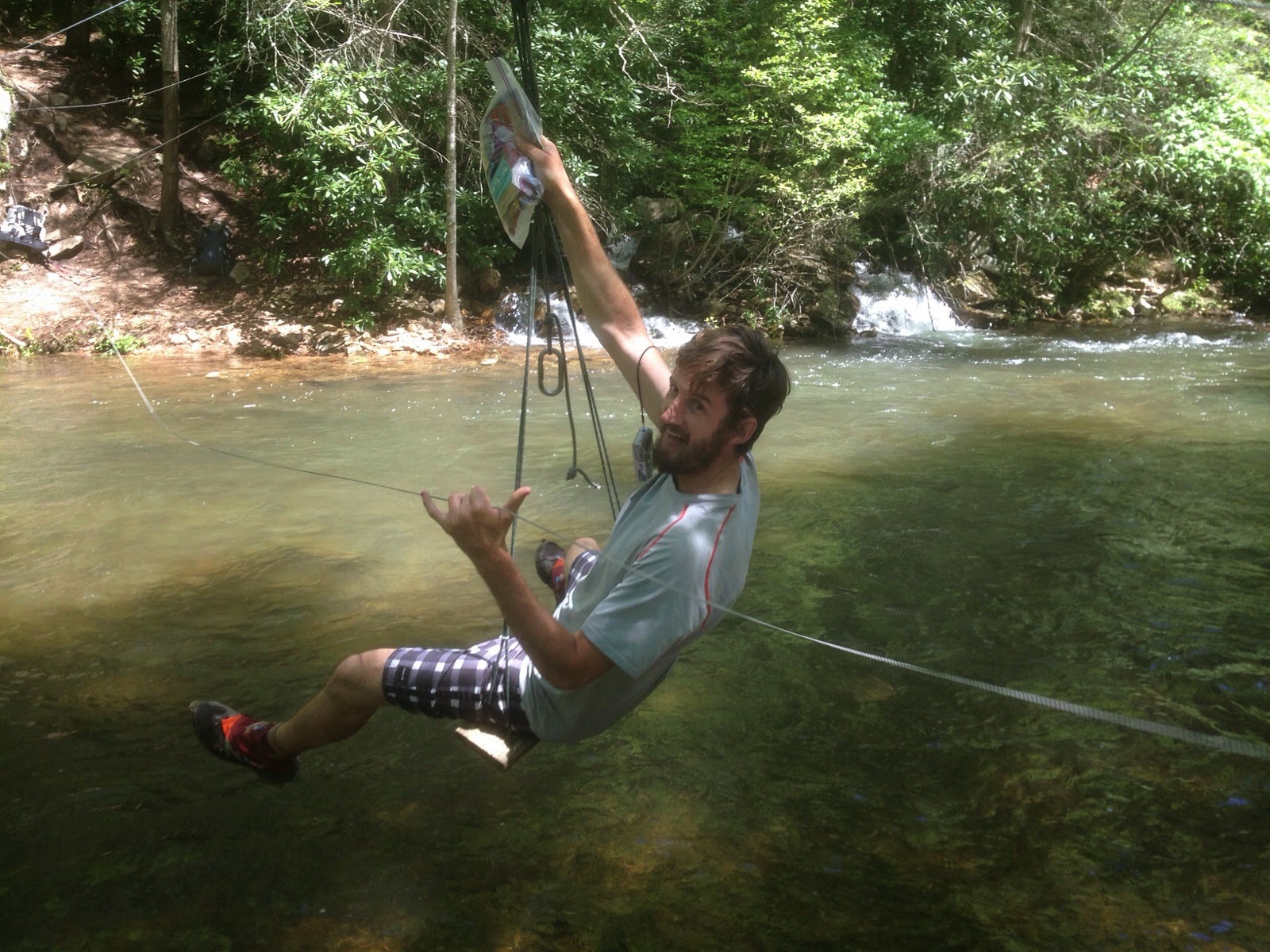 The Captain had just returned from Trail Days and it was nice to meet him. He has a nice big yard in the front and back for hikers to camp. He also has a screened in back porch with a fridge full of soda free for hikers. The creek wraps right around his property and it was really relaxing. He even had wifi for the hikers and a big grill I’m sure he often puts to use. After spending some time there, we returned to trail and checked our progress for the day. I like to do 24mi on full days of hiking, but I’m ahead of schedule and I need to accept the social part of this trail. We looked at out camping options from the Captain’s and there was a nice campsite with a view that was too perfect to pass up even though it was a bit earlier than I’d like. We decided to end there and in the last few hours, ran into many more people which made our earlier camping option an even better choice.

I was waking when I approached a southbound hiker that blocked the trail widening his arms and legs smiling at me. It turned out to be someone I knew! It was Mango, who was section hiking the PCT in 2012 when I did trail magic near Crater Lake and ended up giving him a ride to Portland. He had even offered to host me at his cabin near Roan Mtn a couple weeks ago, but the timing didn’t work out. We talked for while and it was wonderful to get to see him! 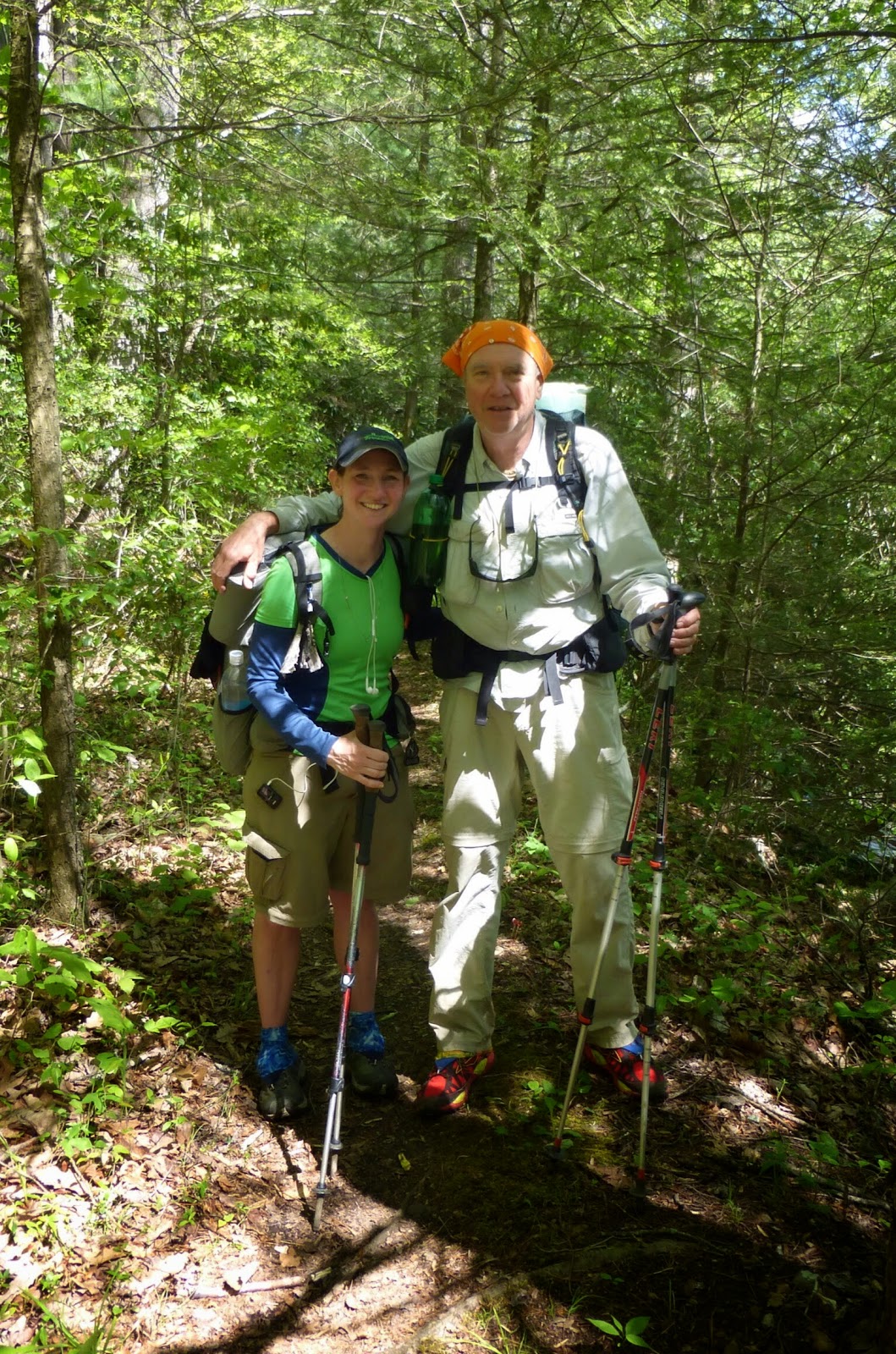 Towards the end of the day, the trail got really rocky with jagged rocks everywhere requiring careful footing and patience as it slowed pace significantly. 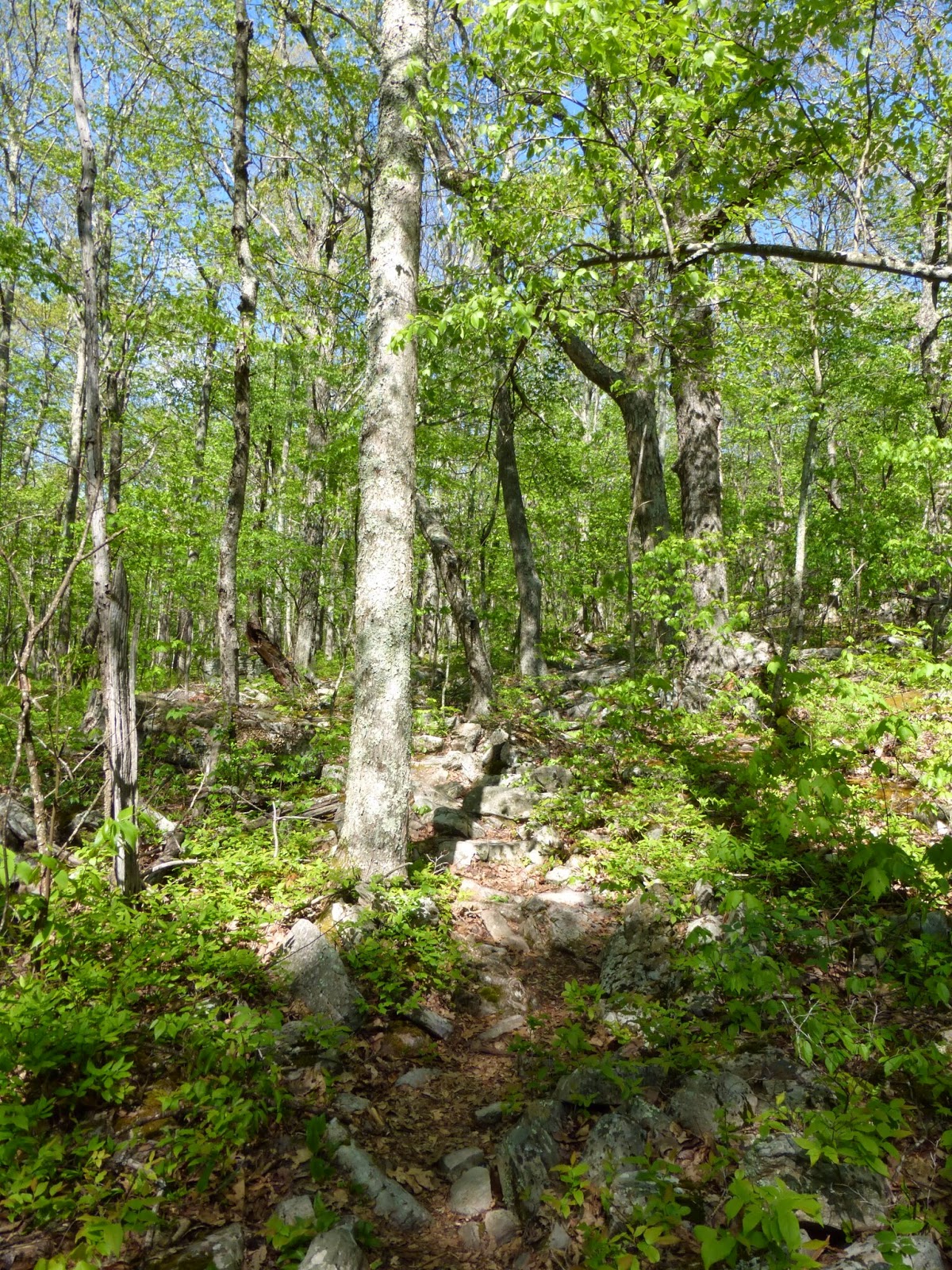 I ran into another group day hiking south and they turned out to be a couple named Itchy and Scratchy who are in charge of the trail maintenance for the rocky section. They had done the PCT in 2012, the year after me, so it was nice to meet them. After all these conversations and rocks, we made it to our campsite with a view just before 6:30pm. As we were setting up by the viewpoint, which is just a short walk from parking nearby, a mother and her college aged son and daughter came. They stayed an hour or more as we ate dinner and talked more. 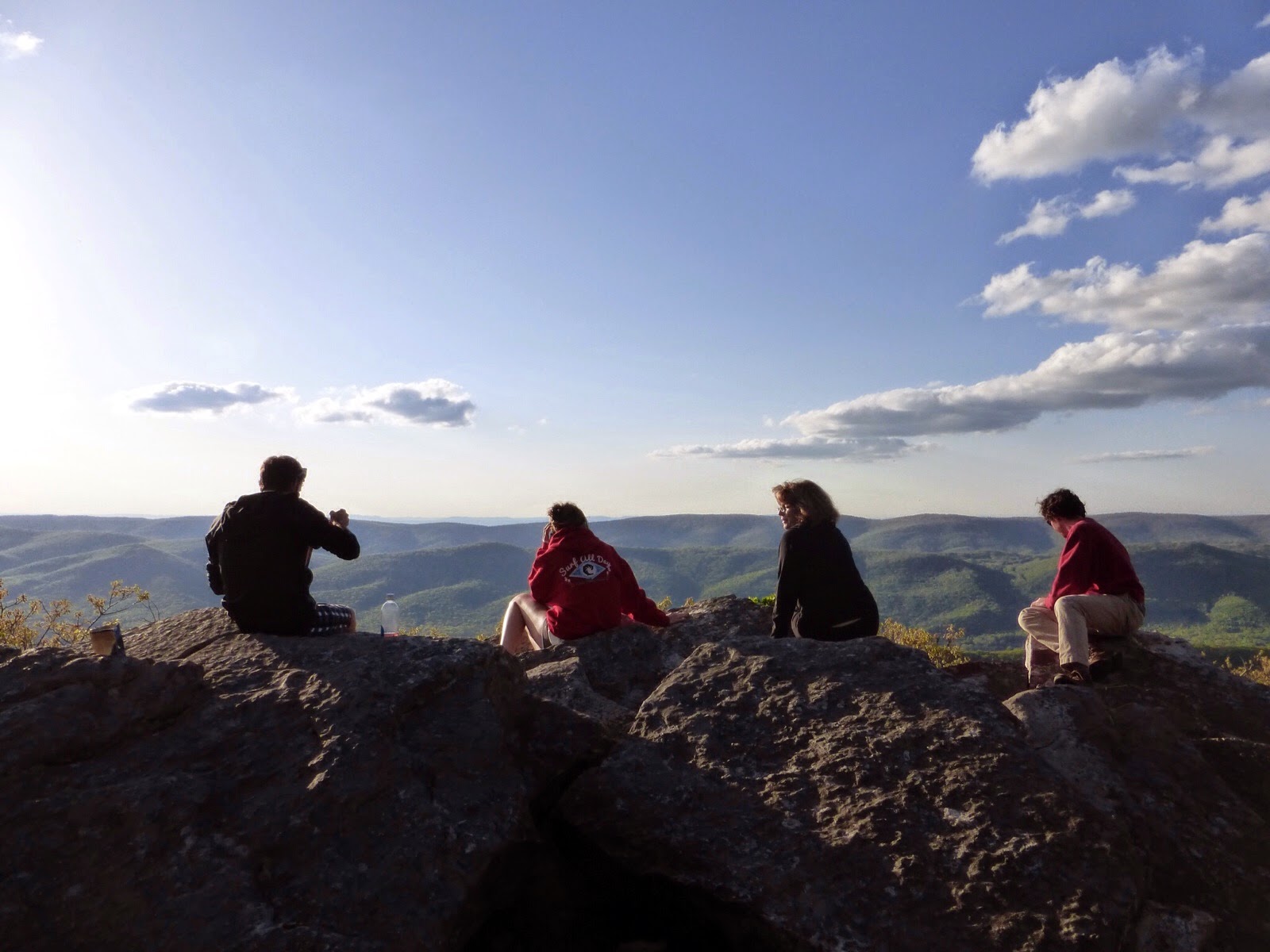 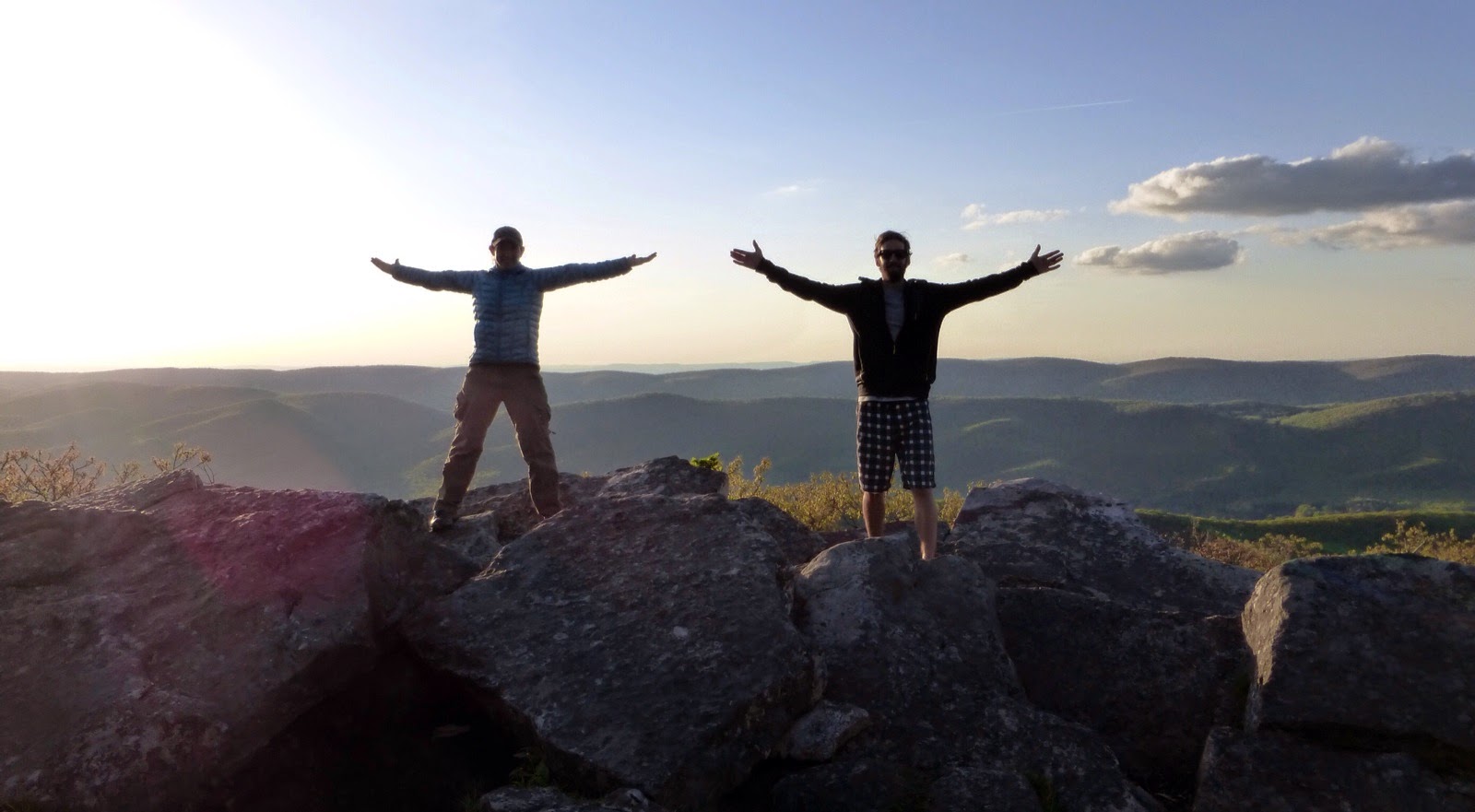 After they left, a group of four others came to watch the sunset. I retreated to my tent for a bit until the final moments as they were really talkative and loud and I really just wanted quiet. I came out for the final moments and it was really beautiful. My pictures could not do it justice as the sun quickly dropped. 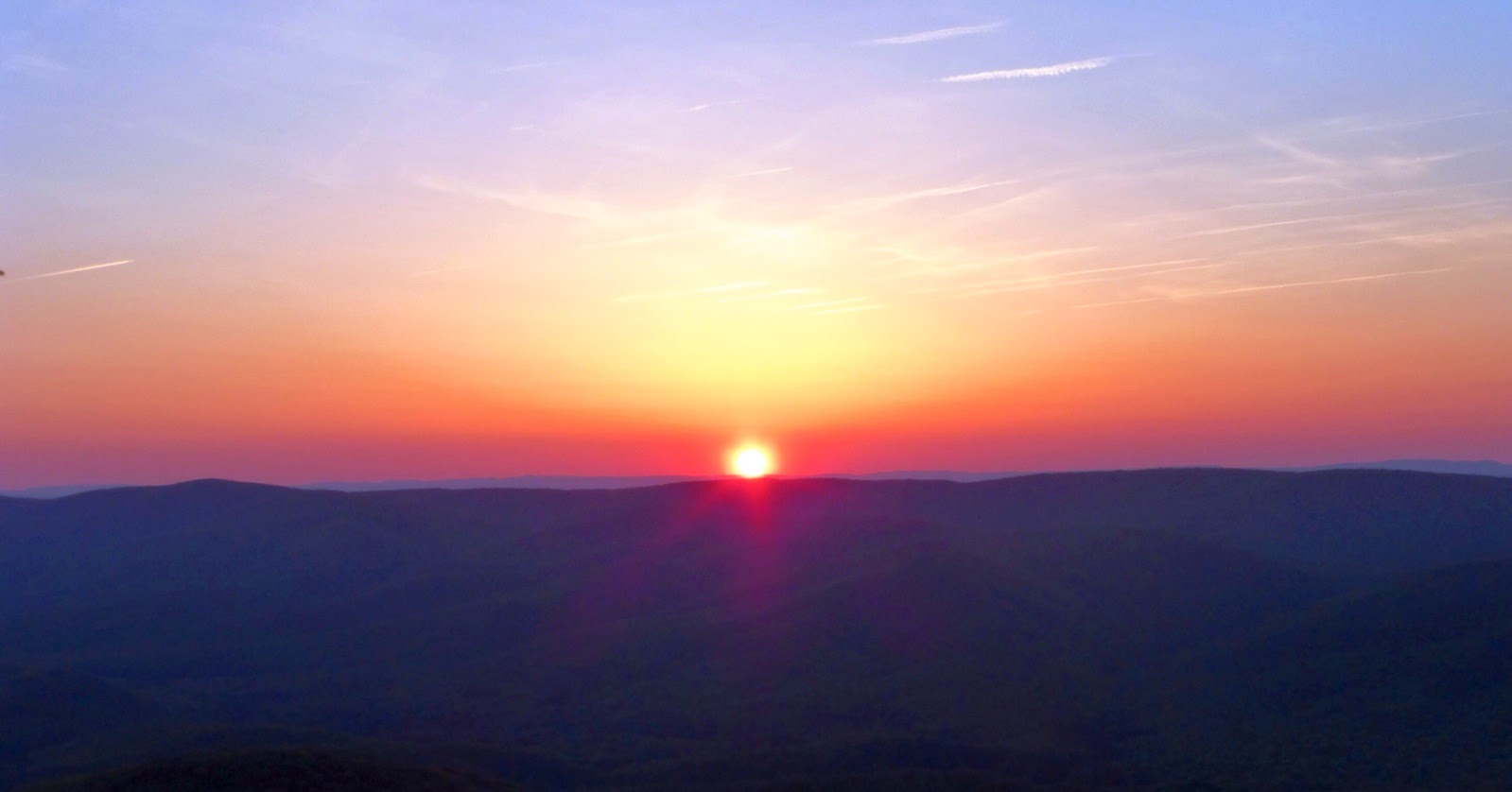 As I was finishing up today’s entry, a guy and three girls arrived after 9:30pm and sat 10yds from our tents talking. I didn’t post a photo, but our tents are right by the rocks. They stayed until just after 10pm. I’m tired and I know it’s the end of the day, but it was way too many people for me today and I’m hoping tomorrow is a quieter day. I know this is a social trail and that it will only have more people on it as summer gets closer. It’s going to be interesting because people wear me out more than hiking does. I just like it quiet most times. I’m sure it will come in waves and I need to just accept it as part of the AT experience. I just didn’t expect it today and I don’t think I’ve had such a social experience since I started, so it was difficult. It was a really nice day, but wore on me at the end. I’m tired and cranky, but it was a good day! I don’t want to be unappreciative. It was a really nice day and lots of great people. I do know it ended up working out perfectly. Had we not stopped to talk to so many people and taken the time to go to the Captain’s, we wouldn’t have see such a great sunset!