Day 33: Everything Is Clicking

Whew, it was a cold one this morning! It was in the mid 30s and the wind was blowing so it was a cutting cold. I was up and out a bit early (6:50am) as I was too cold to even think about my morning bathroom stop and needed to hike a bit to warm up first. I told Ferris I’d see him later in the morning since he was right behind me and I knew I’d be stopping. It was nice to get the morning to myself after hearing so much talking yesterday. I hiked the first couple hours of the day on my own and told hikers who were still getting ready at their campsites to tell Ferris what time I passed so he’d know he wasn’t far from me. There was a nice long downhill for a few miles and Ferris’s knee has not been happy with downhills, so I knew he’d worry I was farther ahead. Then there was a climb of 2.5mi that took about an hour that was pretty steep. I tried to get a picture of it, but it’s difficult to show steepness in a photo. 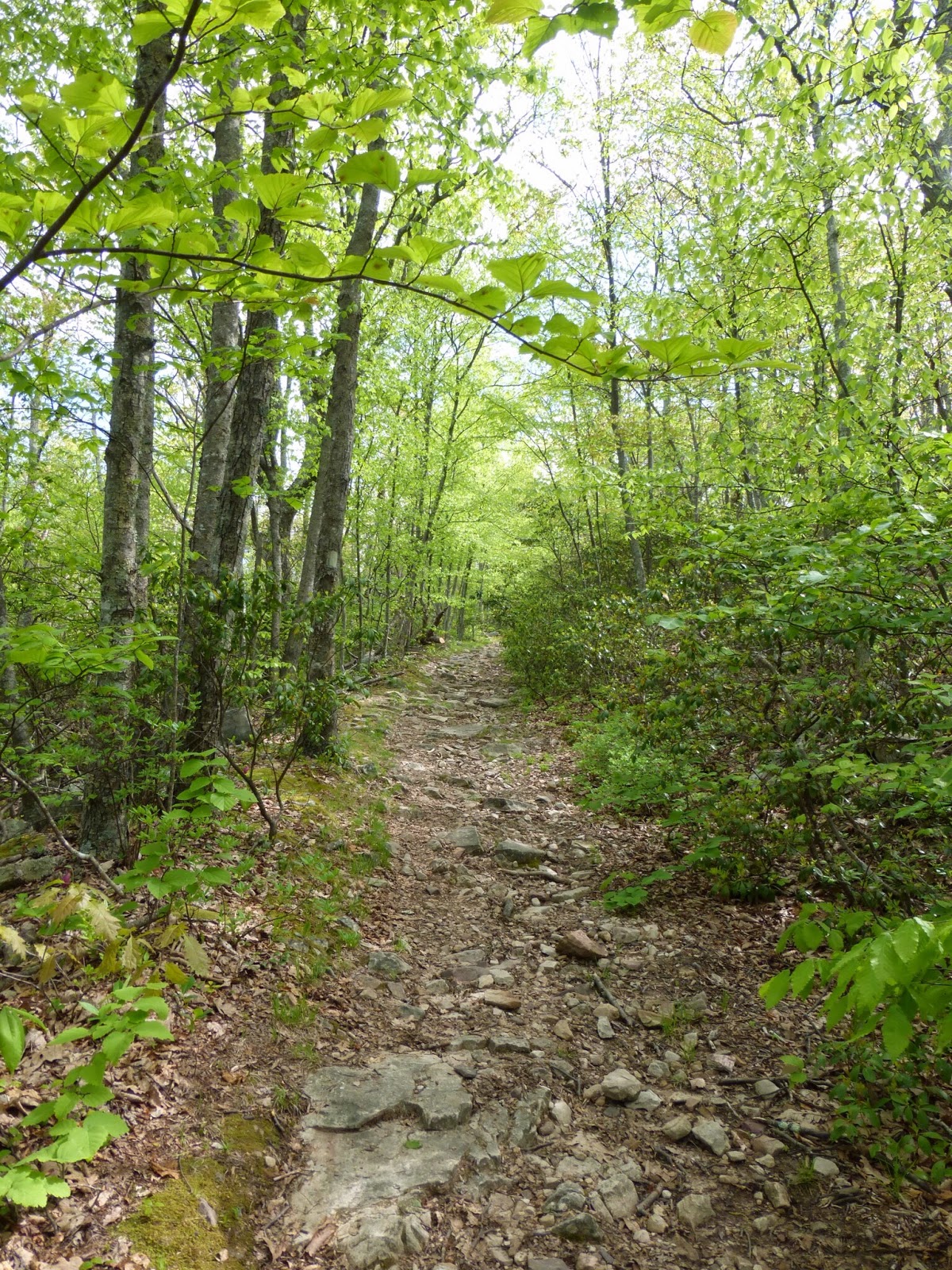 It had warmed up to the 50s and was thankfully cool for the climb. I can’t believe how lucky I’ve been with weather so far as I’ve only had a bit of rain and temperatures are so mild when they could be really hot and humid. I know it’s coming, so I’m soaking up the perfect weather hiking while I can. I hadn’t had phone reception since yesterday afternoon and checked for signal as I hiked up. It was oddly coming in and out so I’d stop when it came in to load something and when it went out, I’d hike a bit more until I got a good signal and repeat the same process. As I was doing this, Ferris caught up and we hiked together the rest of the day.

We ate lunch in the shade of trees just before a 2mi stretch in open pasture fields as it got to about 70 degrees by lunch. At lunch, I did calculations of how much more food I’d need for the leg. Both of us have been much hungrier (possibly because of the colder weather) this leg and have been eating a lot. My food inventory was what I thought…I was eating too much and we aren’t quite doing the mileage I anticipated, so I would need to ration a bit for today and the next two days into Daleville. Plus, I somehow shorted myself a lunch tomorrow and possibly the next day if needed going into town. It would be fine, but I’d definitely need to ration. We hiked on through the open pastures and were sooo lucky that the clouds were covering the sun and it was nice, cool, and very enjoyable.

A lot of our conversations this leg has been about food. We are just hungry and eating lots. It’s tough to ration and I had avoided it til now when I really had to. Then, we came to a stile we were walking through when I saw something in a Ziploc on top of it. Someone had left two Ramens and two oatmeal packets. I magically had my lunch for the next two days and took the Ramens, score! 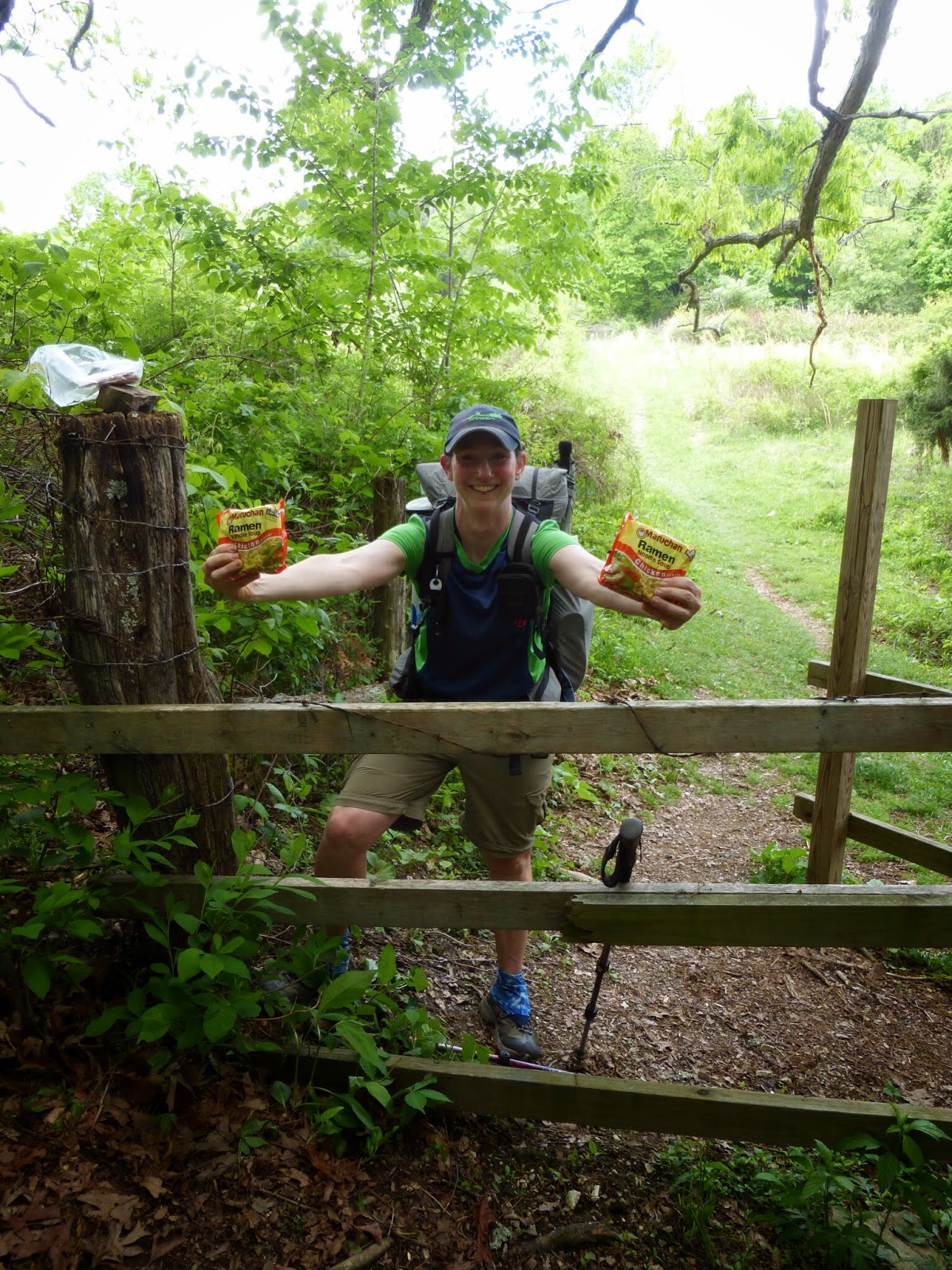 Also, right there was the Keffer Oak. It’s the second largest oak on the AT. It’s 300yrs old and 18′ around. Pretty cool. Here I am with the Keffer Oak. 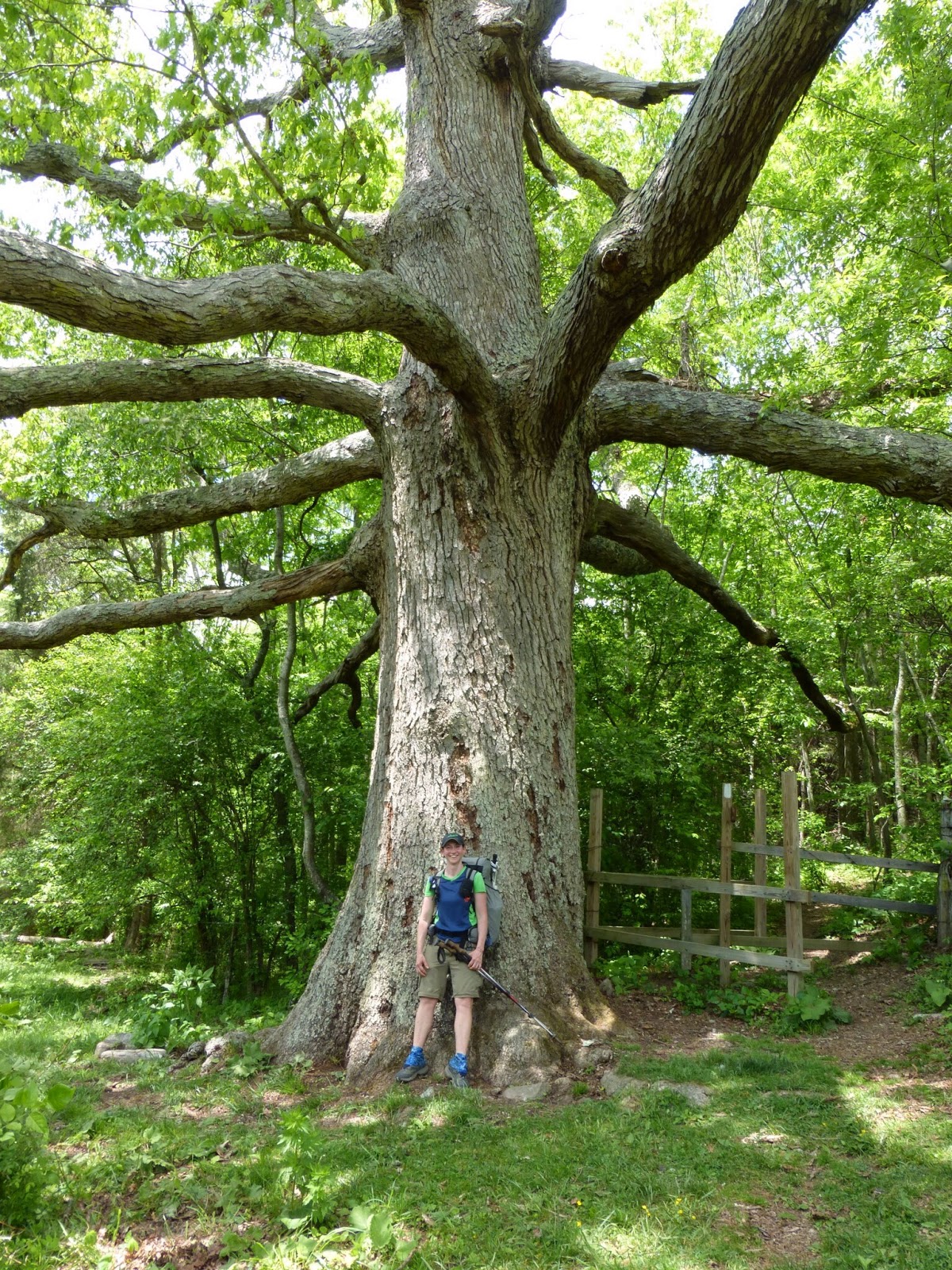 Then we had another short, but steep climb and be were psyched to push up the climb in such perfect and cool weather with overcast skies. I have to say I really appreciate Ferris’s attitude about the physical aspect of this hike. We both like the physical and mental challenge of pushing ourselves in a healthy way. We both can go up steep climbs and enjoy a conversation at the same time and that’s hard to find out here. Plus, we both like going up a steady pace and not stopping til the end of the climb. Again, difficult to find out here. I’m a bit faster overall, but with me stopping to do things on the phone from time to time, it’s worked out. It’s been nice to overlap and team up while it’s working out. Ferris knows he doesn’t want to do this pace the whole hike and he has friends that may visit the trail to hike with him, but it’s working out for the time being and we have been good motivators for each other.

After we got to the top of the climb, we were once again talking about food. I seriously want to get audio of Ferris talking about food because it’s classic hiker rant material. Tomorrow we will cross a road to the most talked about restaurant so far, the Homeplace. A family style, all you can eat dinner with the option of two or three meat options. It’s supposed to be a must do on the trail. We have been bummed because we are both hungry and it will be Tuesday and they are only open Thurs-Sun for dinner. We will be in town overnight Wednesday and would have to zero again to eat there. We have tried to find a way to get to shuttle there from trail later next week and nothing was quite right. Then I had an epiphany! My friend, Coach K, who is a triple crowner that I met on Day 85 of my PCT hike, and who helped me with my CDT planning, had contacted me last week saying he’d be interested in doing trail magic for me around Daleville. I proposed that when we hit Daleville in two days, we grab the food we need to do another 24hrs so that Coach K could pick us up on Thurs and drive us back to the Homeplace to eat and then to the hotel in Daleville. It makes our stretch between hotels seven days, but it’s totally worth it! We called Coach K and he agreed to the plan. It Made our week and we are now motivated by food to add another day to this leg. We were pumped!

Not more than 10mins later we ran into two women, Laurie and Colette, who prefer the name, Women on the Verge. They were doing an overnight southbound and almost to their car. They offered us their extra water, which we were in need of. It was perfect timing and we didn’t have to worry about finding another source til we got to camp. Thanks so much Women on the Verge! 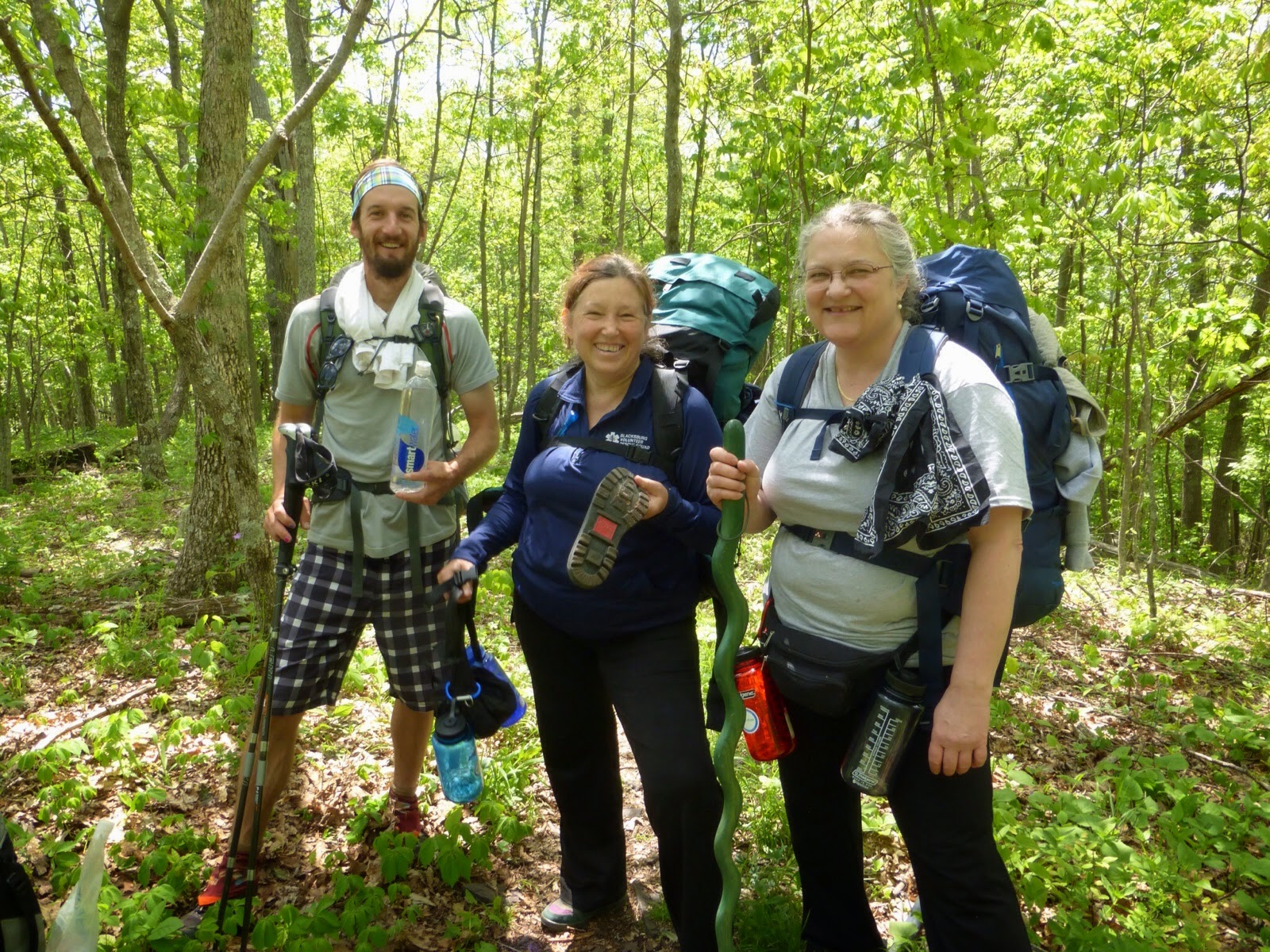 I just love when everything clicks like it did today and I feel like most of this hike has just flowed so well. We were definitely on a high the rest of the day that I’m sure we’ll ride the next three days until the Homeplace. The trail did need to humble us a bit at the end of the day. There were great views up top and we hiked on large slabs of rocks for about an hour at an angle that made bad ankle(one I had surgery on years ago) angry for the first time this hike. It will get over it by the morning. 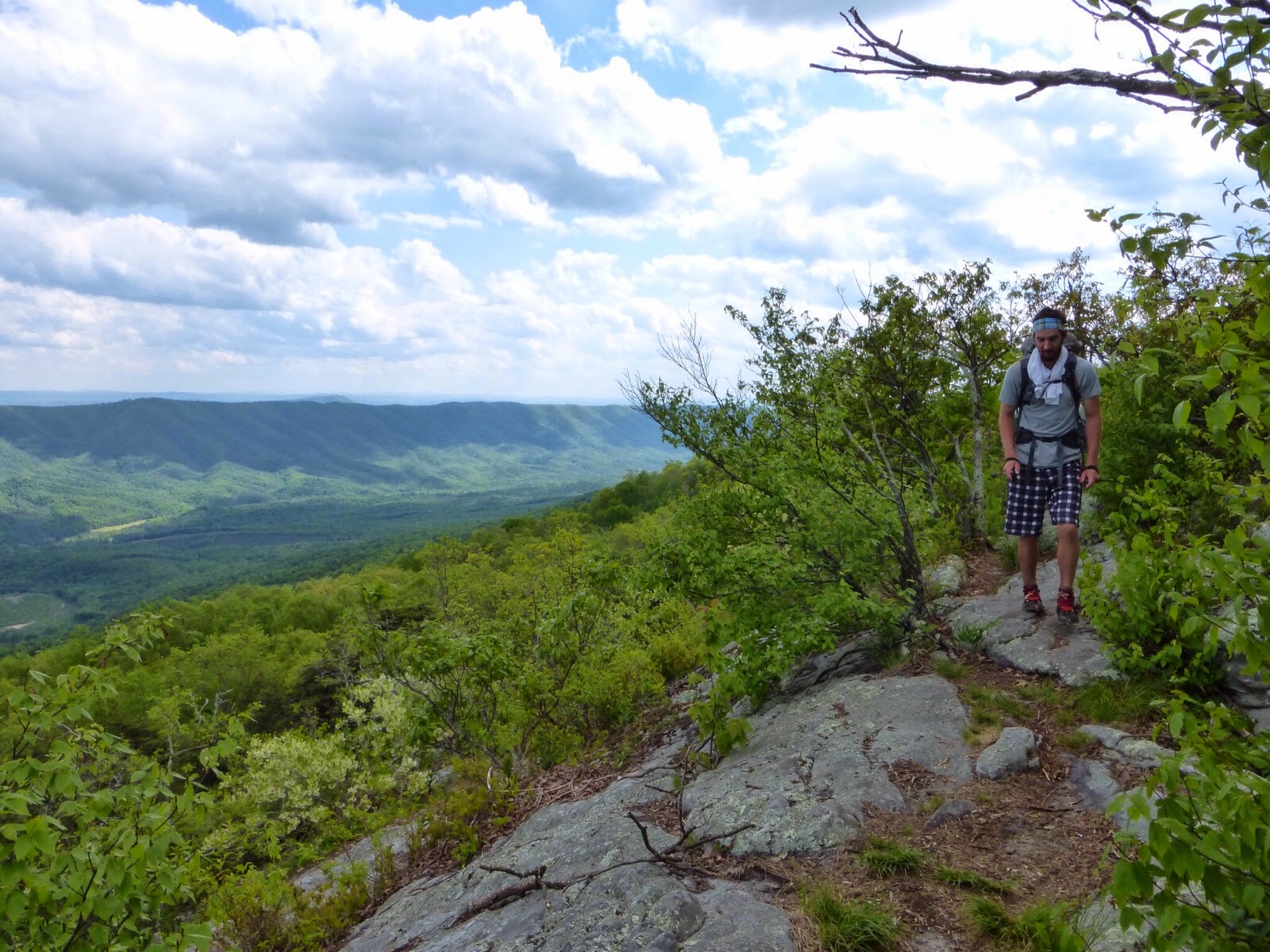 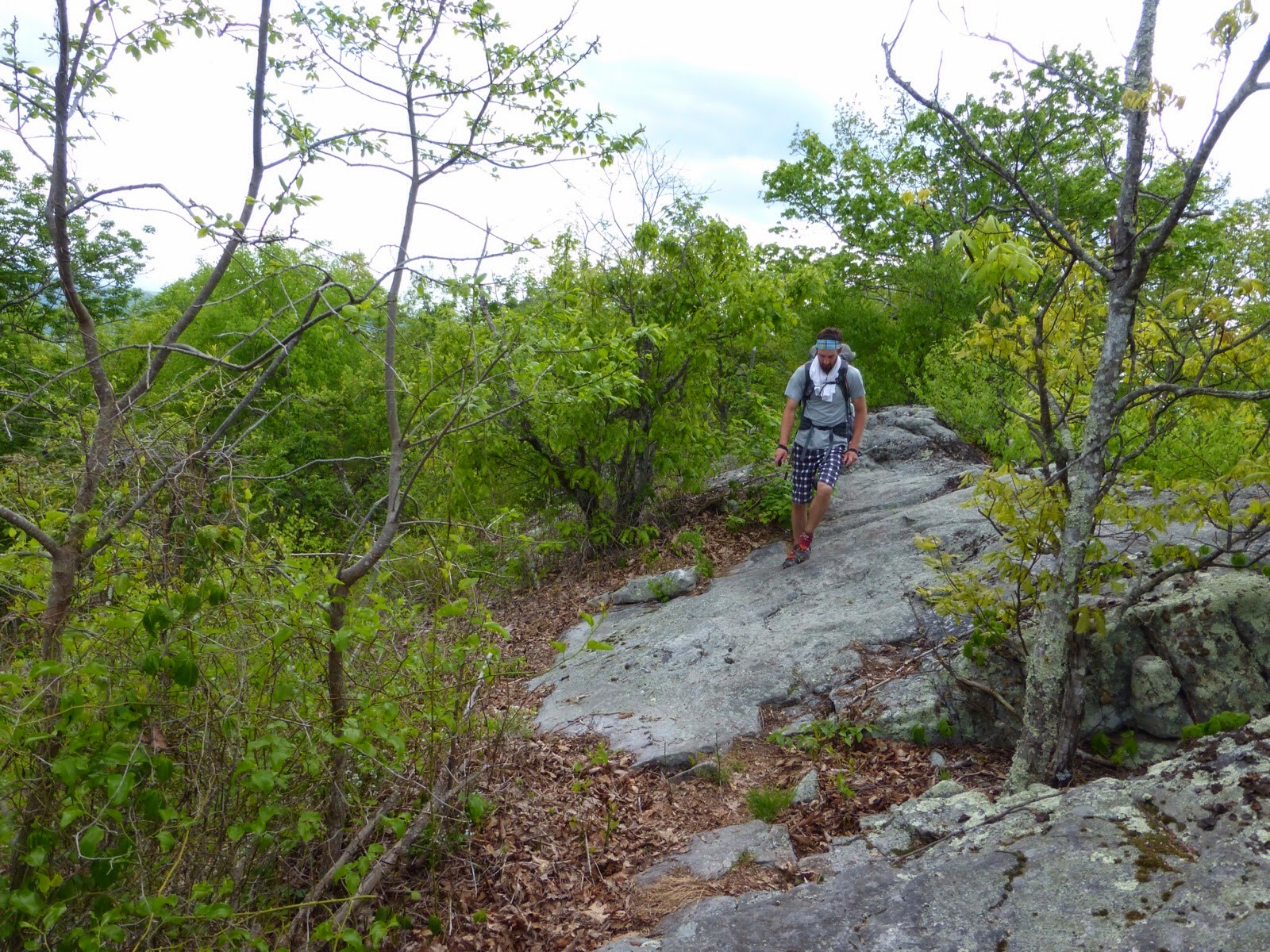 We also saw the Eastern Continental Divide which I didn’t even know existed! 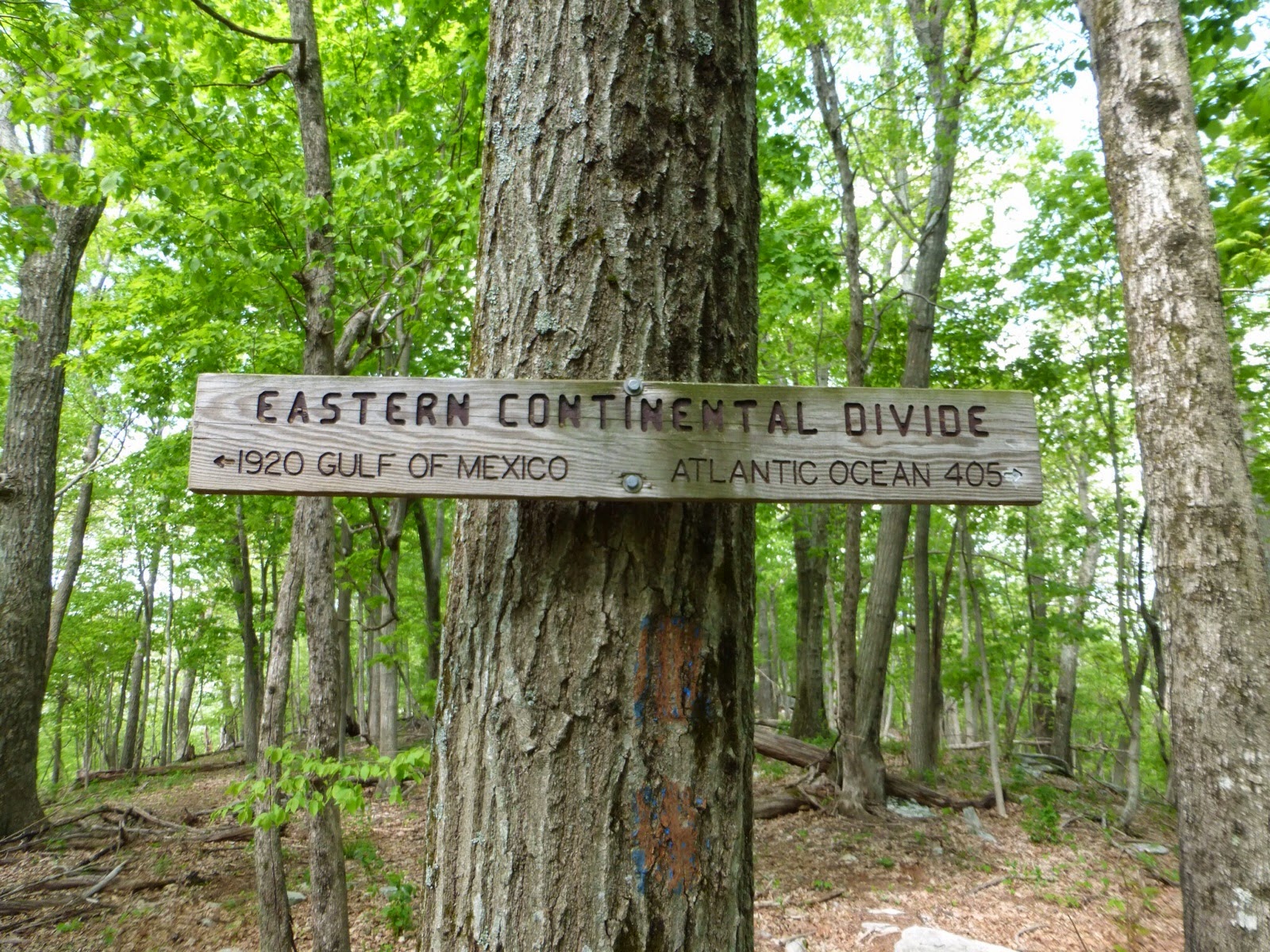 Then a couple hours later, we chose a campsite and immediately noticed lots of spiders. We ended up hiking back .1mi to another spot. As we setup, the spiders and unfriendly looking daddy long legs attacked again! They were all over and jumping and it was unbelievable. We were both quite wigged out. Plus, the deceptively wooded site was like gravel underneath so that made tent setup tricky. We stood up to eat dinner and shook out everything before putting it in the tent and I still had a daddy long leg thingy in my tent. Chills! It was insane how many there were. Still, it couldn’t take away our sweet dreams of the Homeplace. 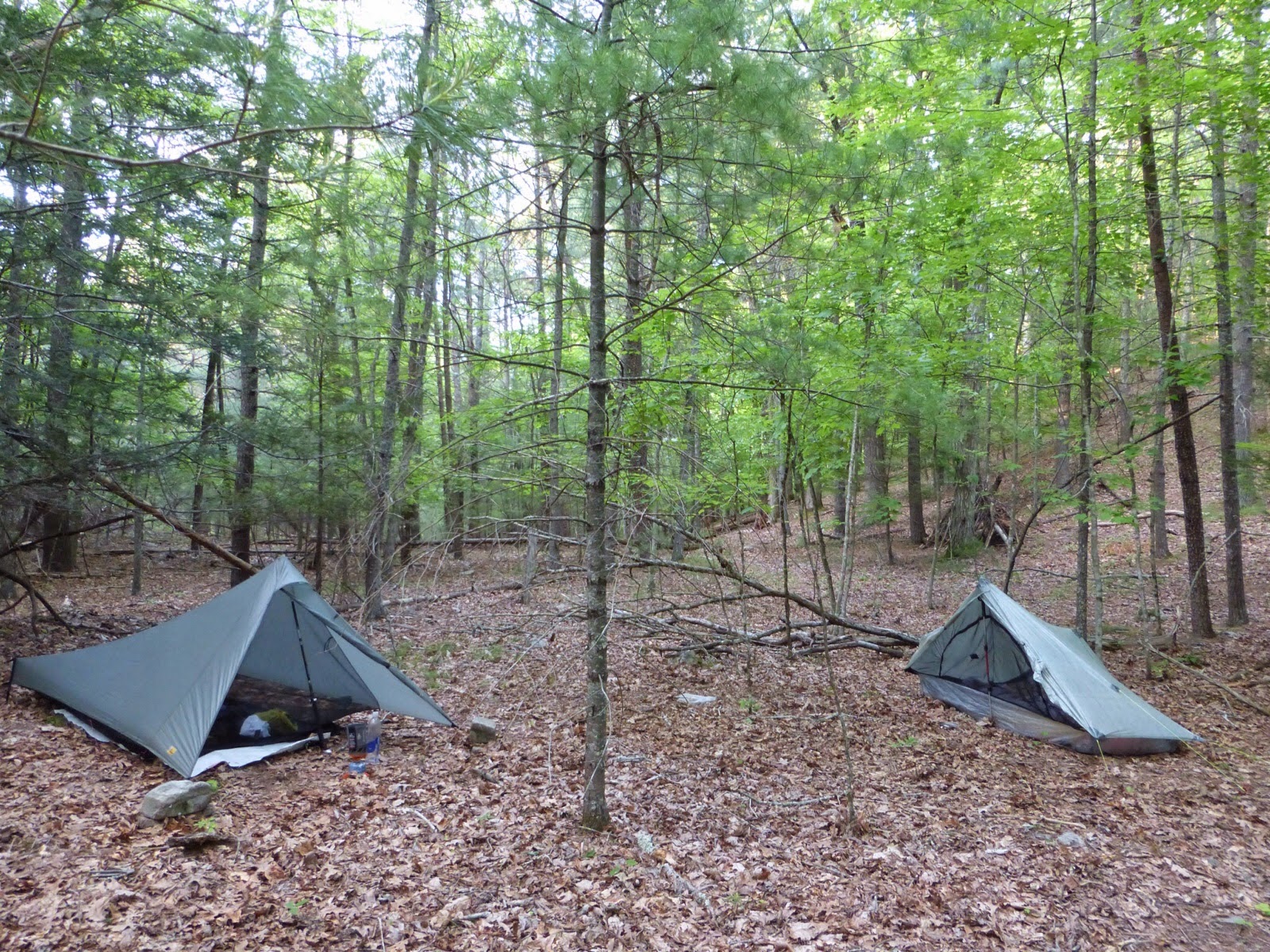