It got pretty cool last night and it made for some great sleeping. It also made me so comfy in my sleeping bag that I didn’t want to get out this morning. In full disclosure, this is going to be a tiring leg for me because I am due to have my period. Yes, already again. Welcome to my world of being highly fertile. I mention this because I felt like a dead weight this morning and could have laid there quite awhile longer. I knew why I was feeling that way and that today would probably be my last day of feeling okay and energized this leg, so I got myself motivated to get up and take advantage of this last day to get miles in before I started feeling worse.

Once I started hiking at 7am, I got into a groove that I ended up staying in all day. The weather was absolutely perfect again with temps eventually getting in the upper 70s and almost complete shade all day under the trees with a slight breeze. I had a small morning climb to the top of Apple Orchard Mtn, which had another one of those FAA towers that looks like it belongs in a sci-fi movie. 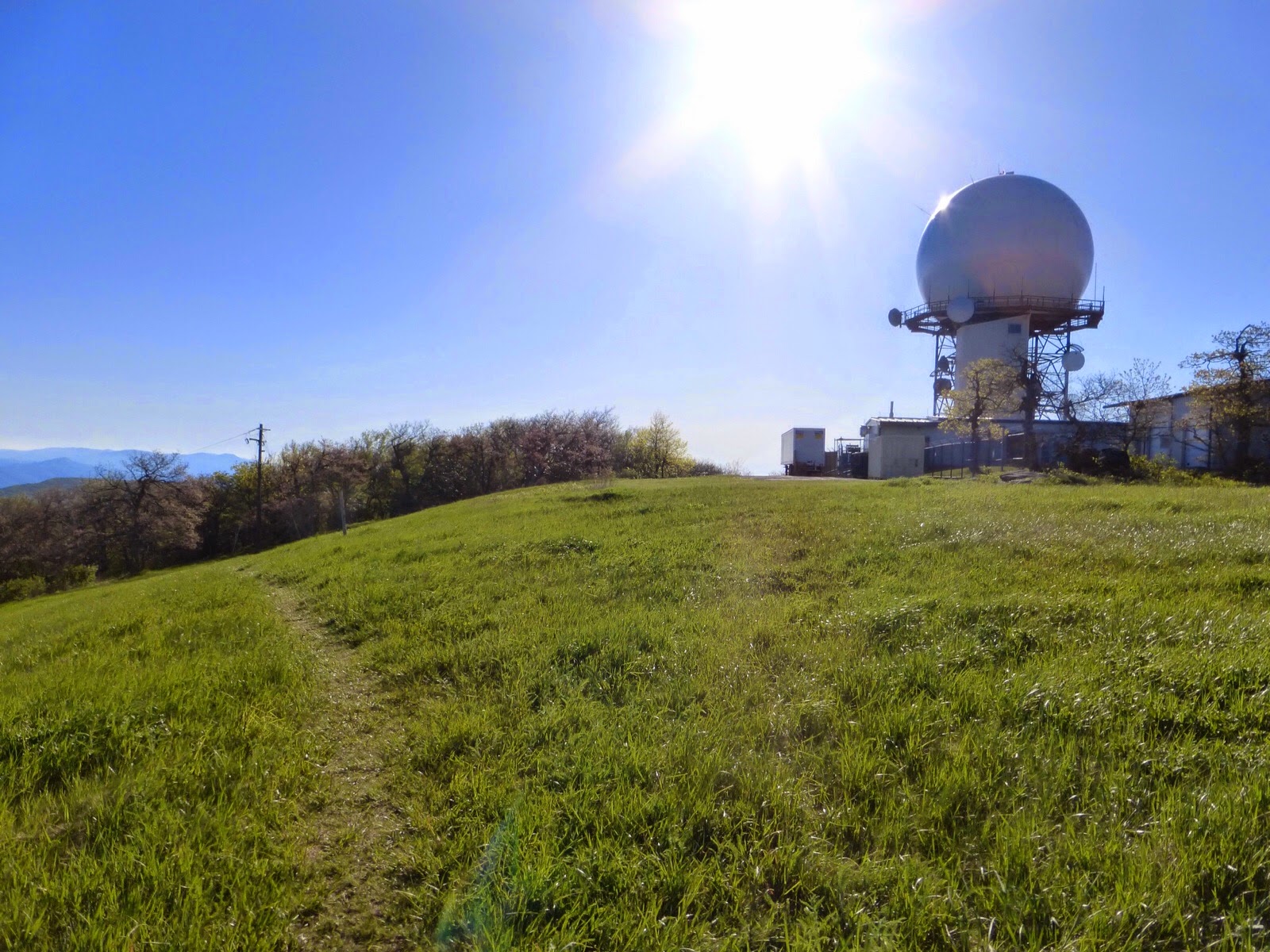 Then I walked through what is called The Guillotine. An intimidatingly large boulder wedged between two large stones. I totally wished someone had been there to hold the camera so I could have gotten a funny picture under it. I guess you’ll just have to imagine it. 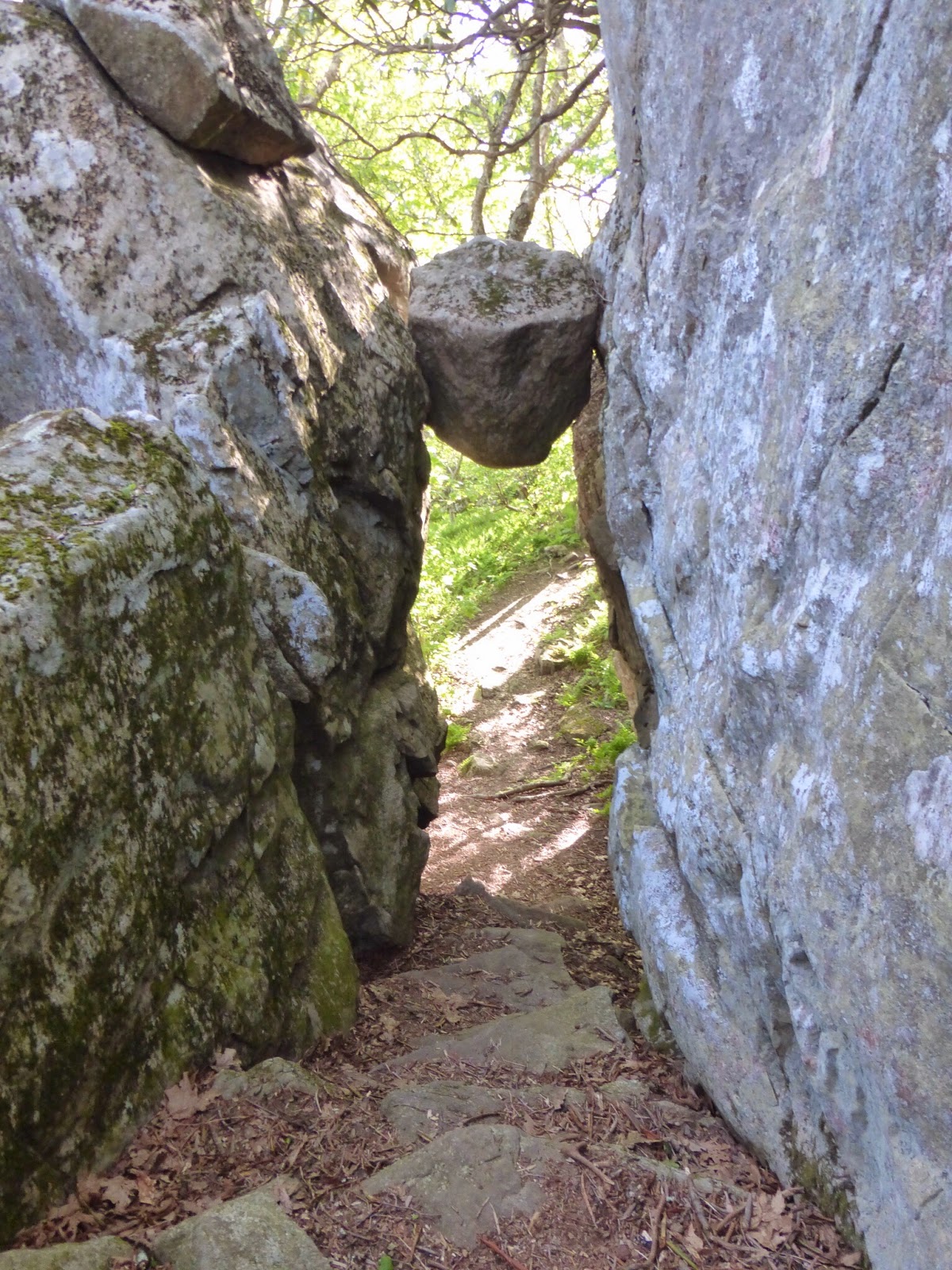 I then realized that I was approaching Thunder Hill Shelter and wondered why the name was familiar. Then I realized that it was the shelter where there was going to be a major hiker feed today and tomorrow. Over 100mi ago, there was a flyer on a tree about it saying that they’d be feeding hikers with tons of great food this weekend. I held off on the second half of my breakfast in the hopes that I wouldn’t be too early, but unfortunately I was and it probably started a couple hours later. A Pop Tart never tasted so disappointing in my life. I texted Ferris about it and he was planning to be there at the end of the day and was hoping not to be too late. I will find out tomorrow if he made it in time.

The rest of the morning and afternoon was downhill or level and I was cruisin’! There is hiking and then there is HIKING. I was totally HIKING today and it felt great! The last week or so, the trail has had nice elevation, but there have been a lot of rocks for long periods that prevent a natural and relaxed stride. Today, I was able to stretch my legs and keep and uninterrupted stride for most of the day and I was loving it! At lunch, I got to eat at a stream and sat on a little peninsula surrounded by a small stream that wrapped around it and blooming rhododendrons. It was just great! I took a picture, but it doesn’t do it justice without the sounds of the trickling water I was unable to record and the cool air in the shade with a light breeze. 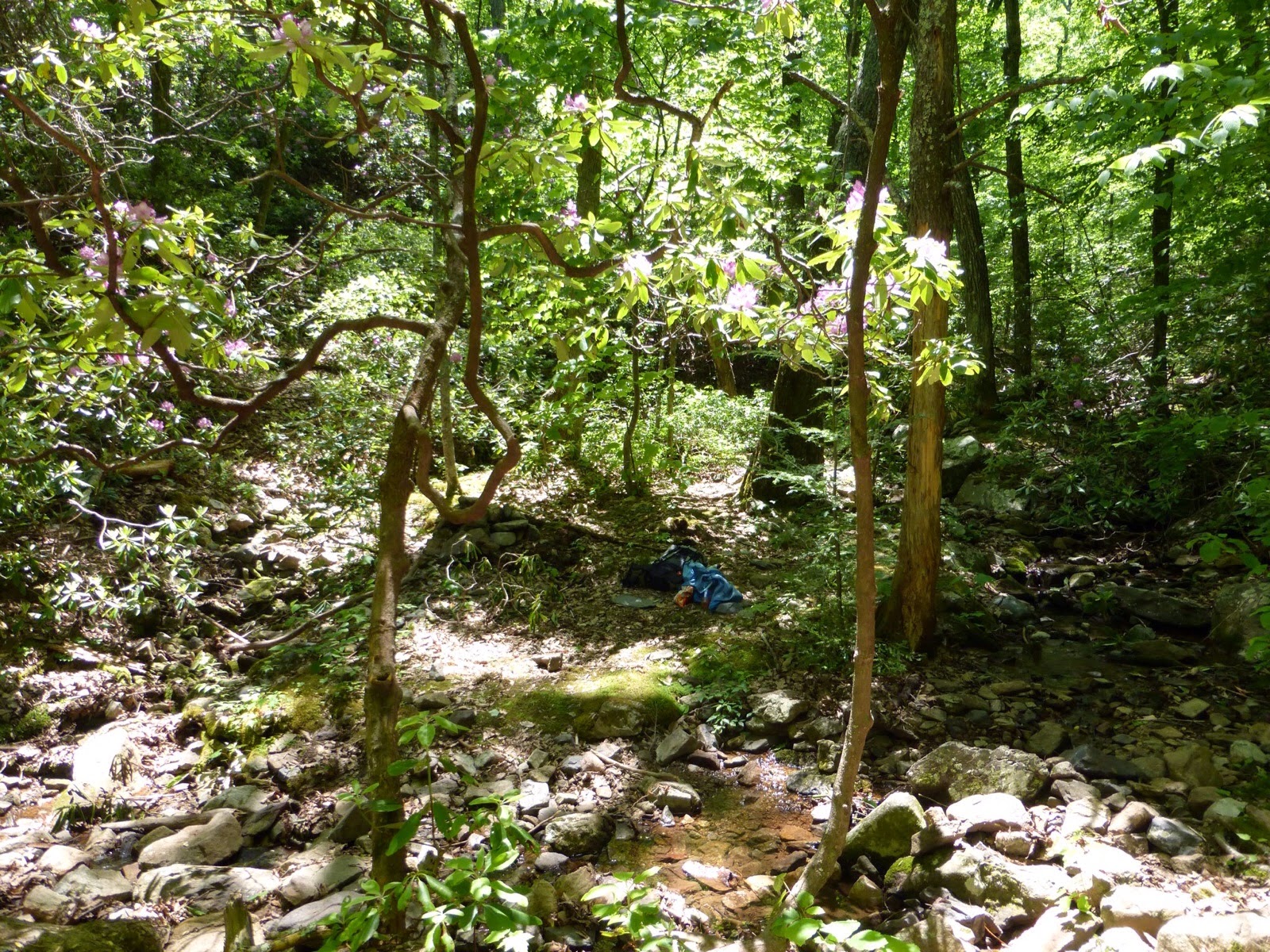 The trail gradually went down to the James River and the trail paralleled it for a mile. I finished Allegiant which is the final book of the Divergent trilogy. I wasn’t thrilled with the plot of the final book, but it had quite an ending! I have to say I have much respect for the final message of the books which many teenagers read. I don’t want to give away anything, but it basically says that life can suck sometimes and that everyone gets hurt, but that it’s worth living and experiencing with others. I really like the final quote which I won’t write here as I’m sure many are in the process of reading it and I think the final part of the final book really speaks to this younger generation which struggles with a lot these days. I didn’t like the trilogy as much as Hunger Games, but I recommend it and am looking forward to the movies! 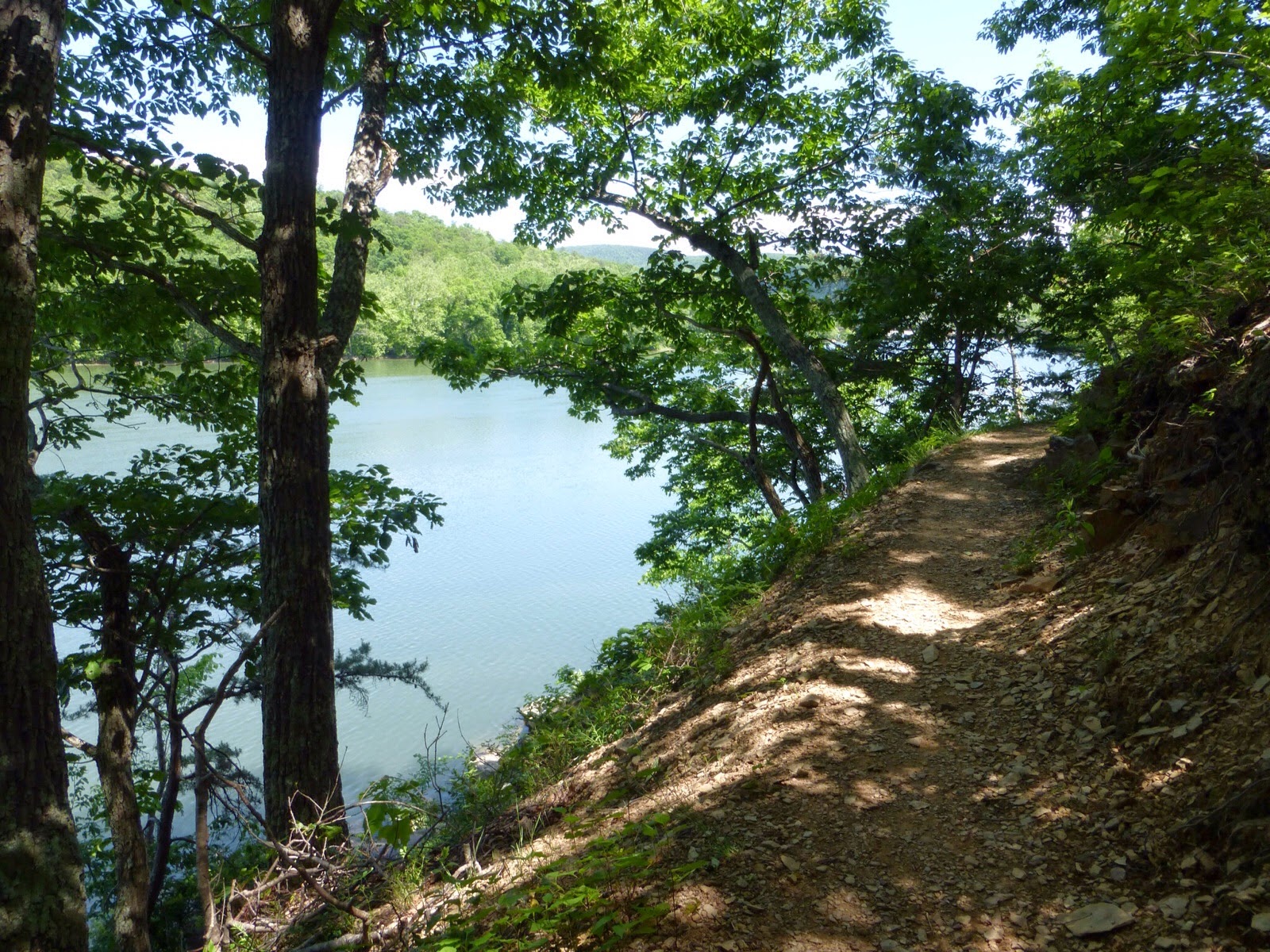 Then the trail crossed the James River over a footbridge which is the longest foot traffic only bridge on the trail. It was created thanks to the efforts of a former thru hiker and there was a dedication plaque at one end of the bridge. I crossed just as a train was crossing the bridge next to it. 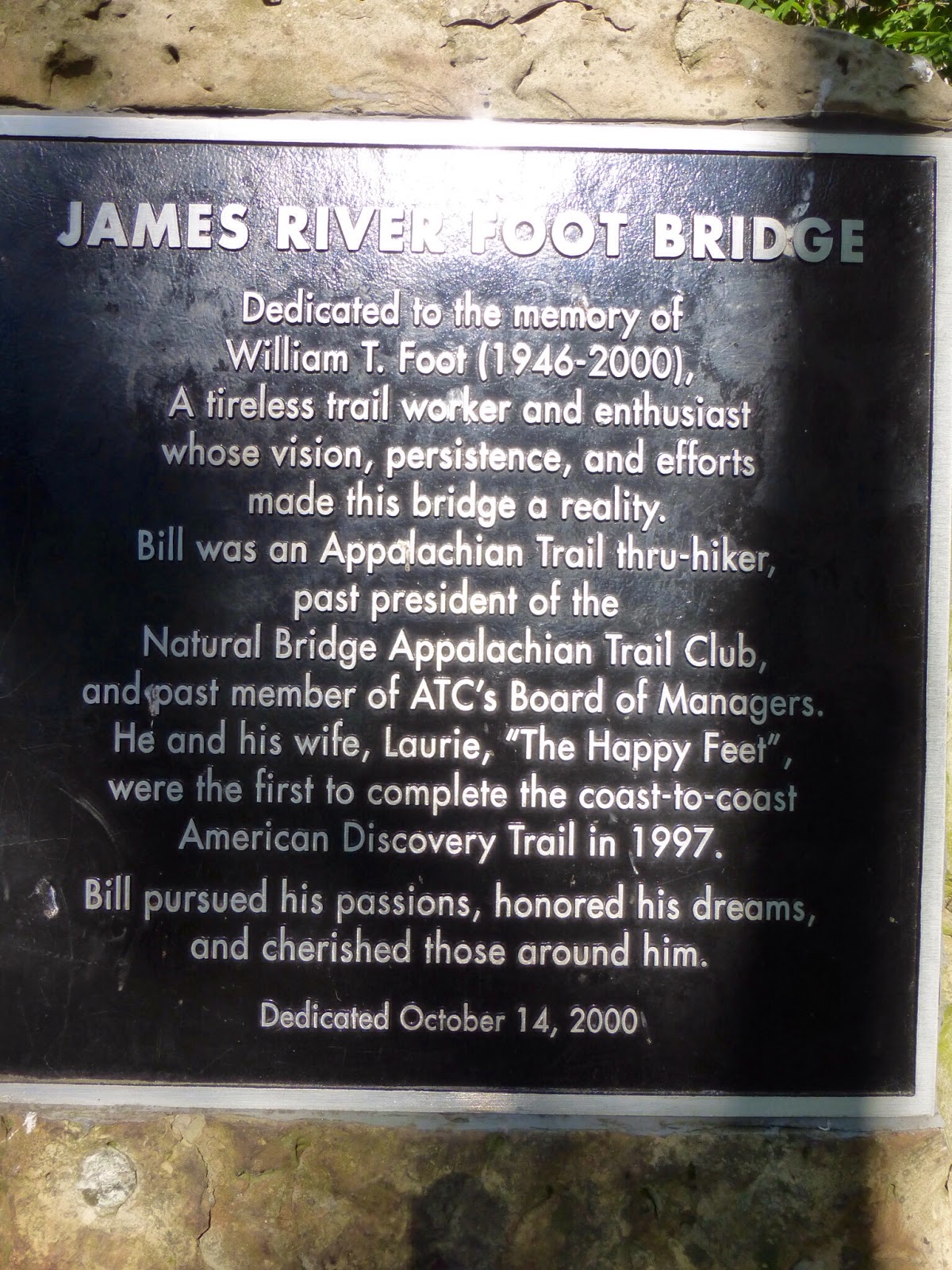 The trail ran along water much of the day today and the sounds of the water running in the small streams were very enjoyable. Again, a sound I tried to record that only came out as white noise. Hopefully, you can imagine it for yourself. 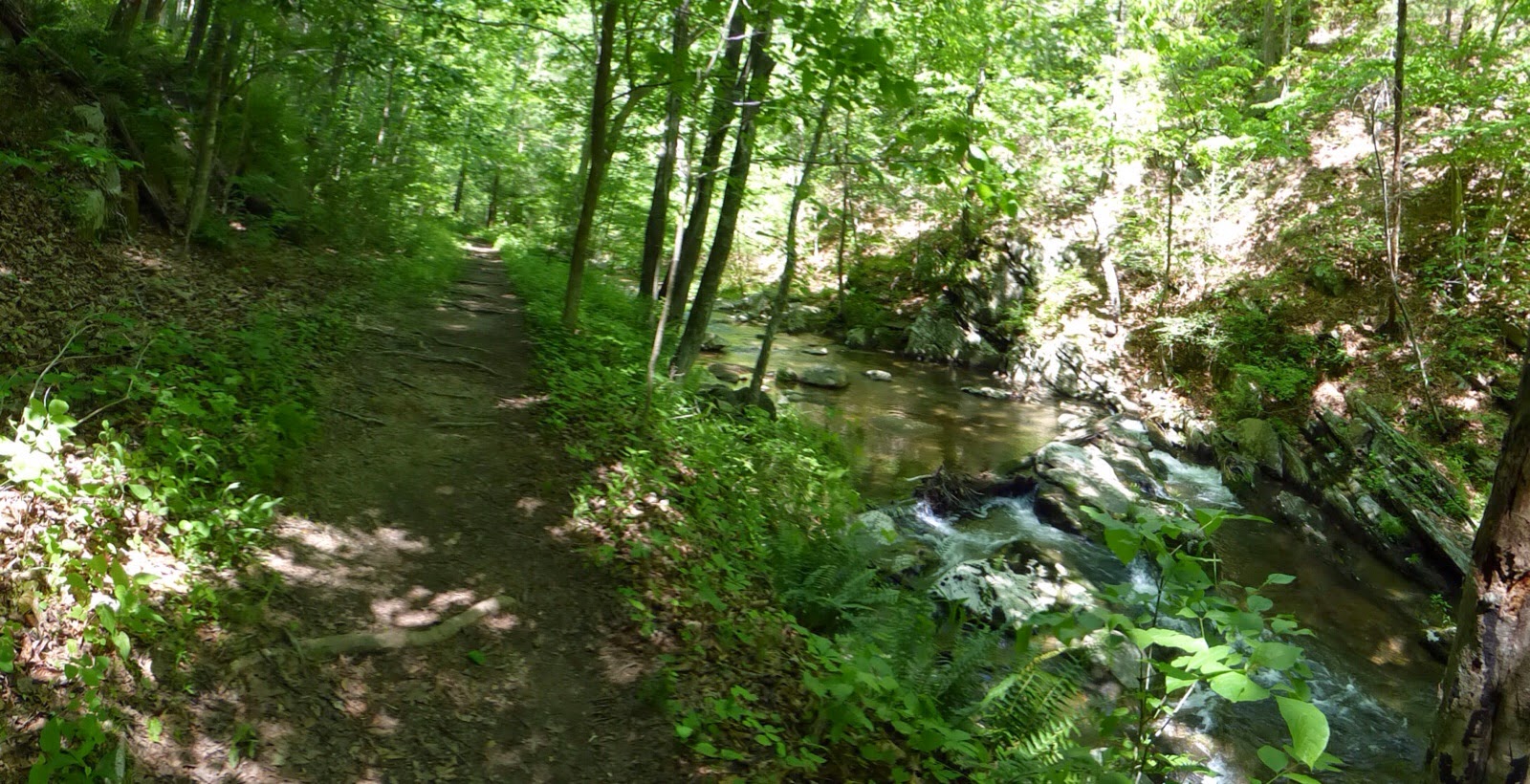 I have seen lots of lizards in the last week and they run off quick before I can get a picture. I got one today of a lizard on a tree that is a good size and the one I’ve seen the most. Yesterday I saw one with a neon blue on its tail. 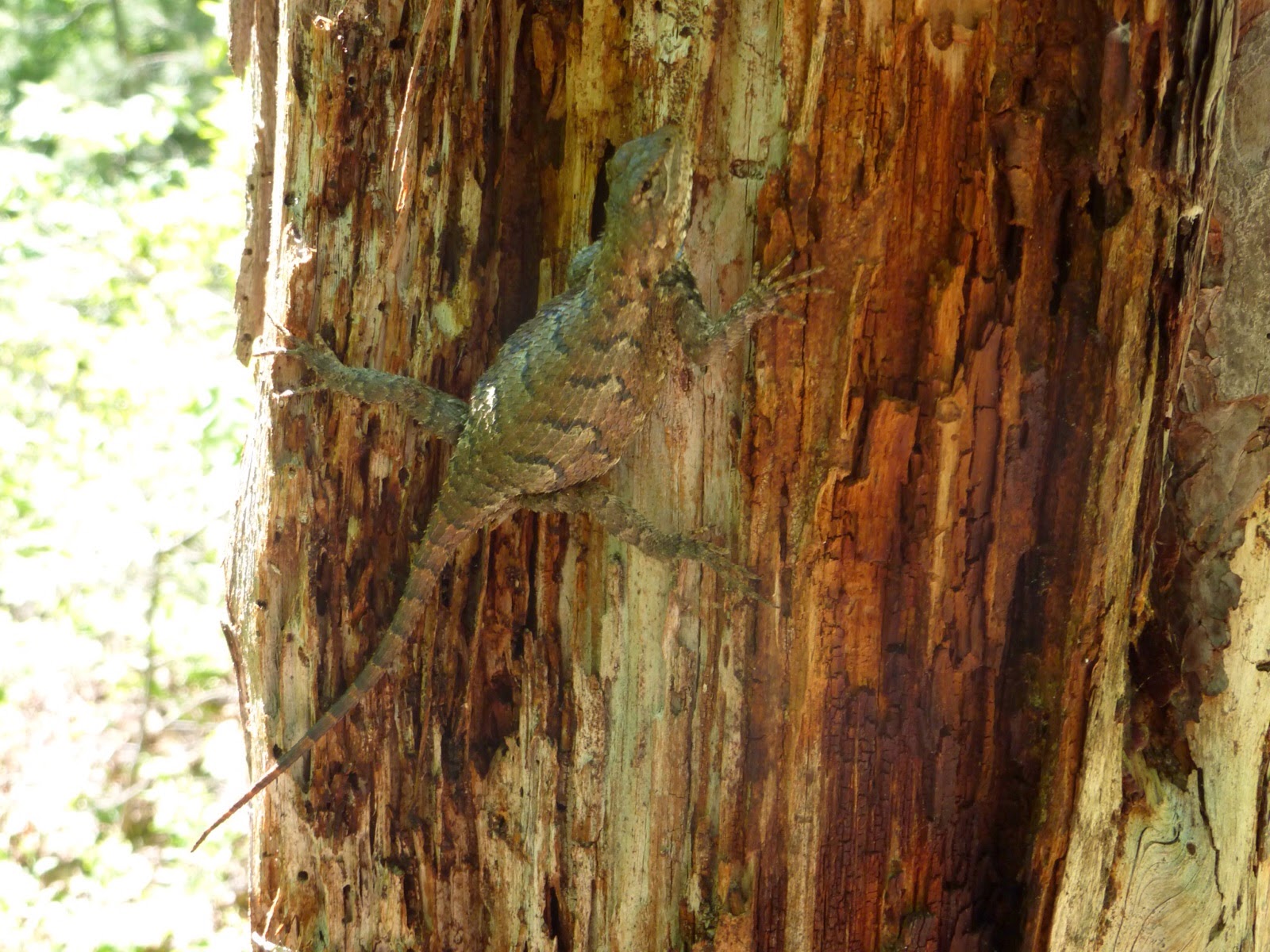 After crossing the James Bridge. I met a thru hiker named Bear Bag who was taking a break. The first thru I met of the day after seeing many weekenders. He soon caught up to me at the bottom of the one big climb of the day. I checked the data book to find out that I wanted to go about 7-8 more miles, but that the climb was long and that it was 9mi to the next water source at a shelter. I looked and saw that it would give me almost 30mi for the day. I didn’t intend that, but I was cruisin’ most of the day. I was feeling good and I didn’t want to carry camp water up the big climb so I decided to push further than I would have to the shelter figuring I’d make it by 7pm, which is just 30mins later than I prefer to hike. I followed Bear Bag up the hill and we talked a bit, but he was moving really fast and attacking the 2.5mi climb that went up over 2,000ft. We were dripping sweat and it actually felt good to really push up the climb. I liked the challenge and I’m glad Bear Bag was there to challenge me a bit. Once at the top, we were able to look at what we’d done. 20mi ago this morning, I had been at the top of Apple Orchard Mtn, which is the upper right corner of the picture below. Then the trail came down along the James River and went over the bridge barely visible where the river bends. Then back up to the viewpoint. 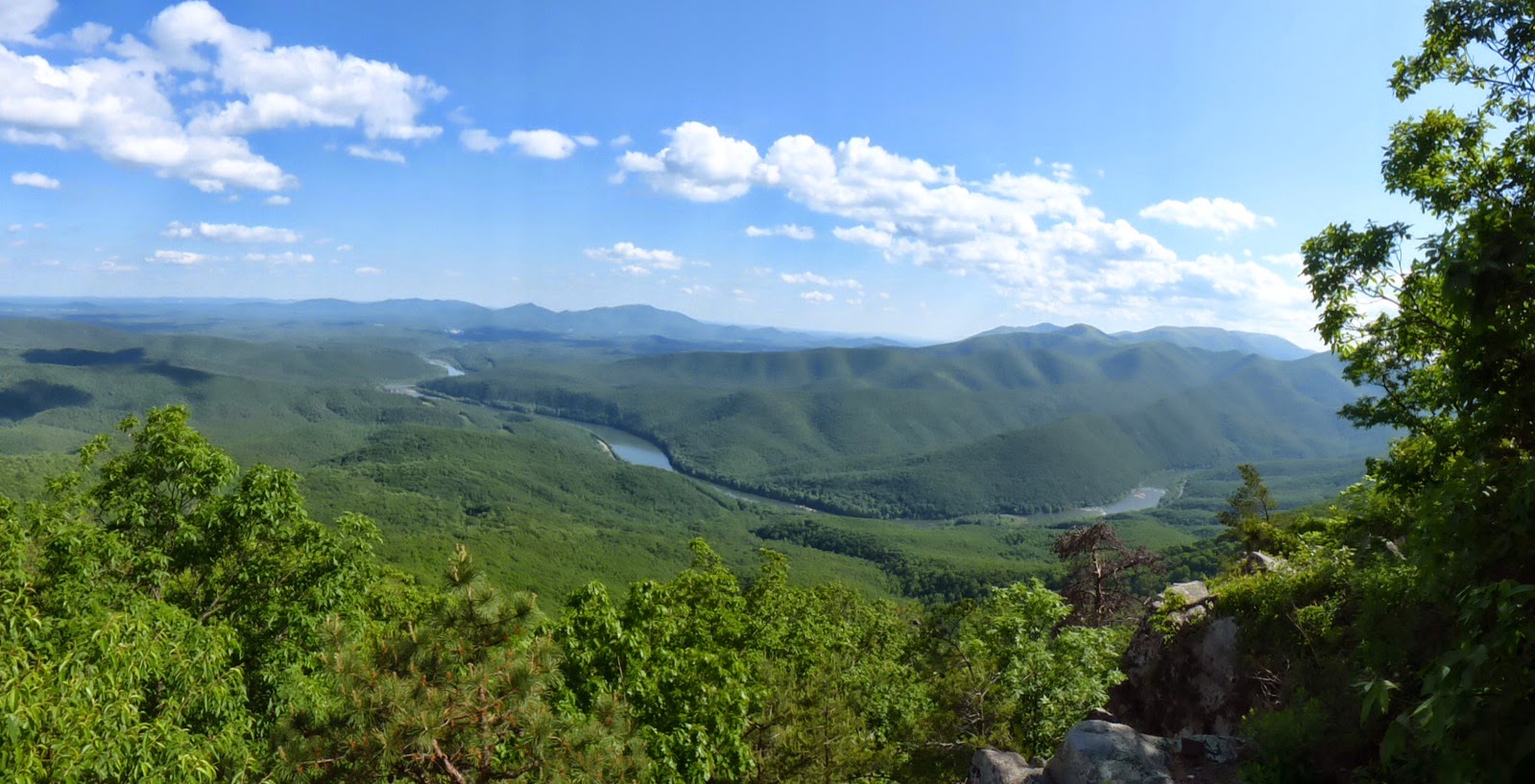 Bear Bag stopped for a snack and I pushed on the final six to camp which thankfully had a fair amount of downhill. I was glad I did the miles today because my cramps started in the last hour or two and tomorrow will be a tough day. I made it to the shelter by 6:45pm and as I expected with the holiday weekend, it was packed, but with all the brush there was nowhere else to camp nearby. There were thru hikers and then two groups of Boy Scouts. It was a lot to take in. 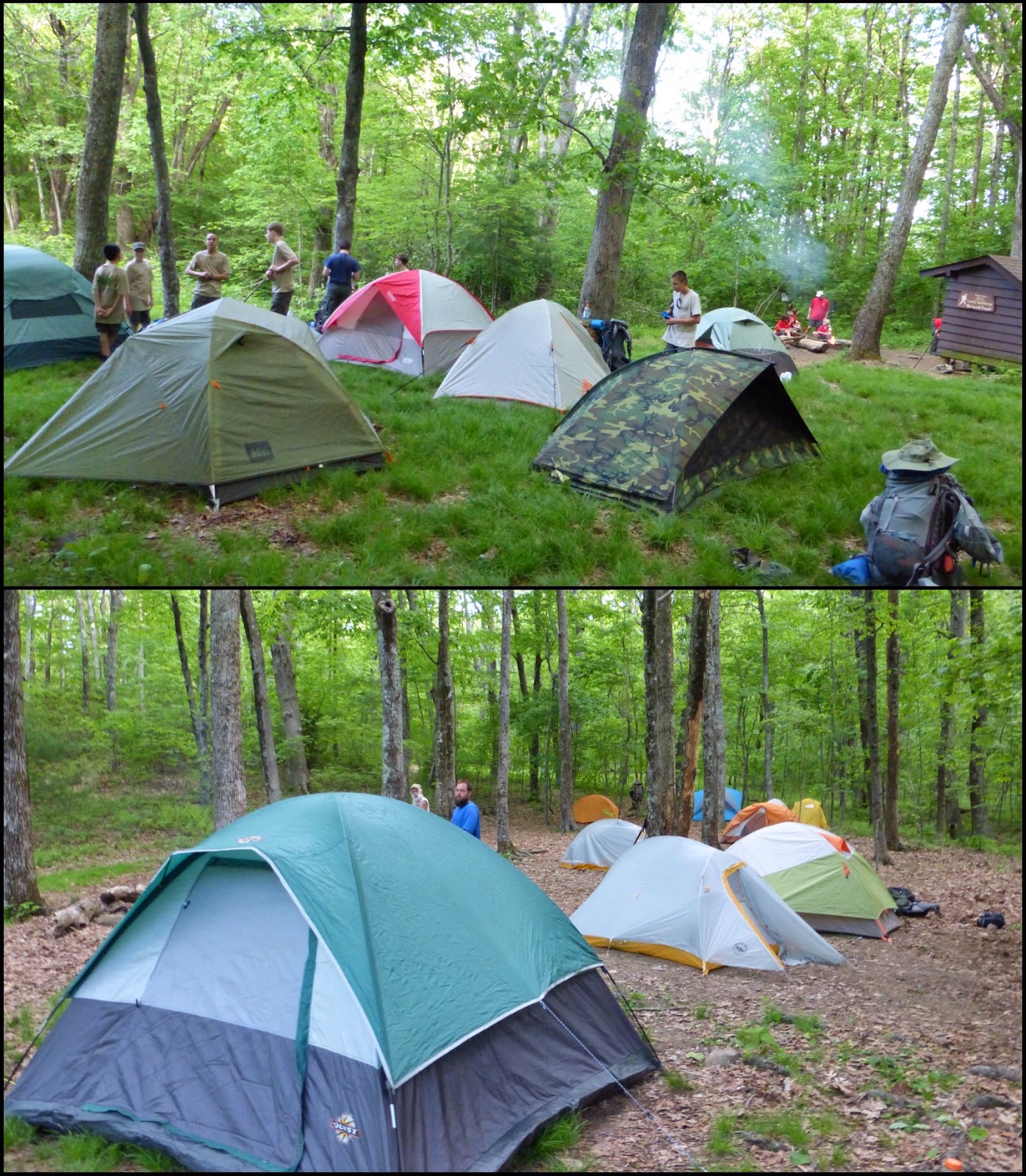 There was a field with a bunch of thru hiker tents side by side and I found a small spot where I was able to move brush an find space to myself. I was quite proud of my efforts until I questioned some of the leaves around me and if they were poison oak or ivy. I asked others if they thought I was in it and they didn’t think so, but weren’t sure. I’m rolling the dice on this one and hoping I don’t get anything! It is now after 10pm and amazingly quiet, so that’s nice. It was a great day of feeling energized and pumped about HIKING. I know people think I’m pushing too fast and missing things, but I really enjoy the physical aspect of hiking. I had pretty much a runners high all day and don’t feel tired from the hiking at all. It was great! 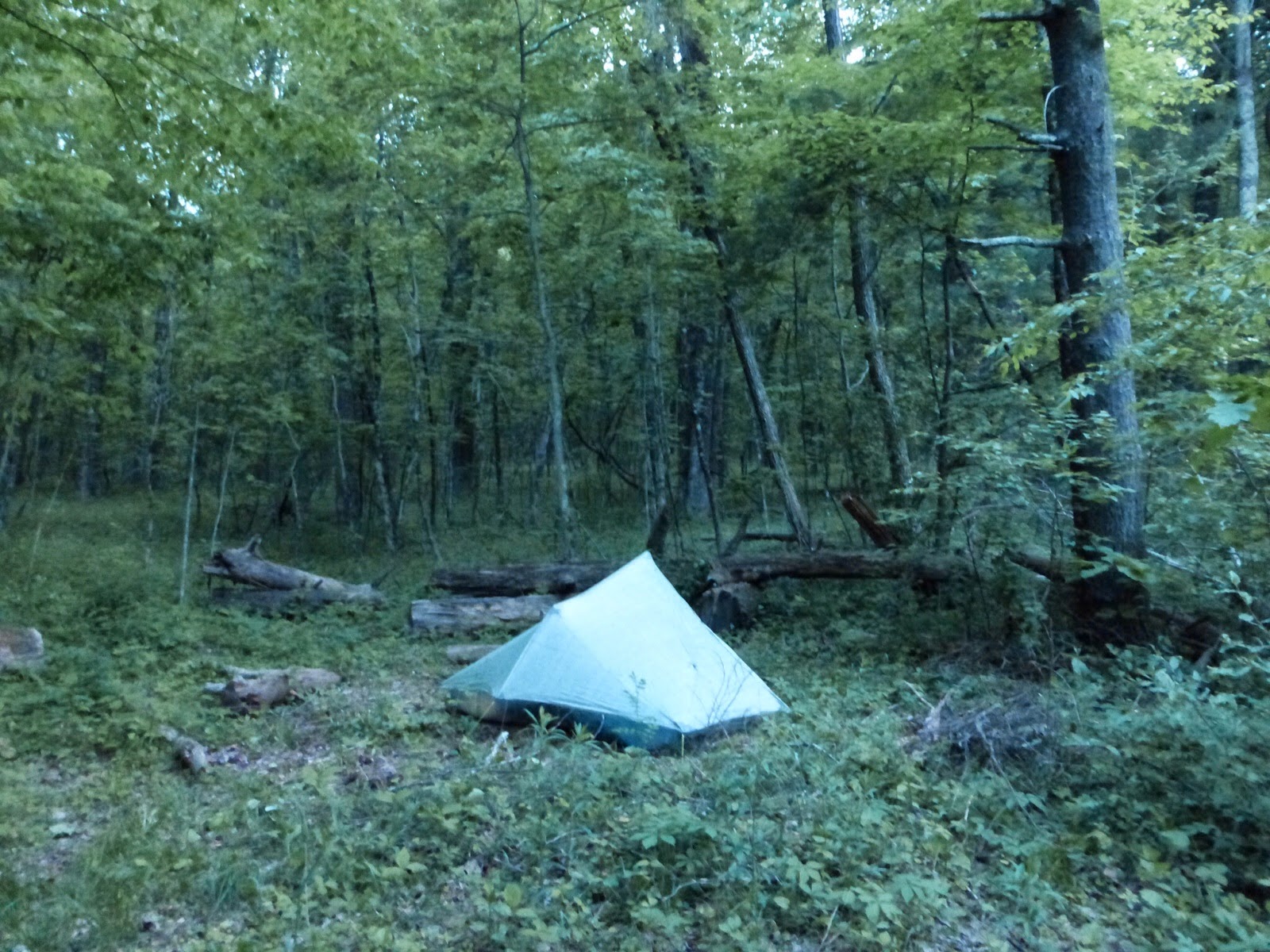 One last thing. At camp, I got to meet two of the participants of the Warrior Hike program. It’s in its second year and has hikers on the AT, PCT, and CDT who are “walking off the war.” It is a really cool program and they have a Facebook page I recommend liking. Just type warrior hike into Facebook. Myself and one of the troop leaders who is in the Navy got to talk to the warrior hiker QT(Quabbin Trekker, a place in Massachusetts). He spoke from the heart and said that after being in the Army for 42yrs, he was a bitter and distant man. The Warrior Hike program is sponsoring his hike and he said he’s already a changed man for the better. His words made me tear up as he spoke of breaking down walls and getting in touch with his emotions. How he never cried before and now all it takes is someone handing him candy for trail magic. He also said he never slept much or even dreamed and if he did, it was nightmares. Now he said he has real good dreams. I had hoped to meet some of these hikers and I’m glad I did. They are all on a schedule and stay within a couple days of one another. They have lots of functions and events they participate in along the way and it’s pretty cool. If you look at their website to go to their Facebook page, you’ll see that last month they got to meet Robert Redford and Nick Nolte and be extras in a scene for the movie version of Bill Bryson’s popular AT book, A Walk In The Woods. Here is a picture of Viking and QT who are both part of the Warrior Hike program. The group started out with 20 on the AT and is down to 7, which is very similar to the percentages of thrus who make it this far. 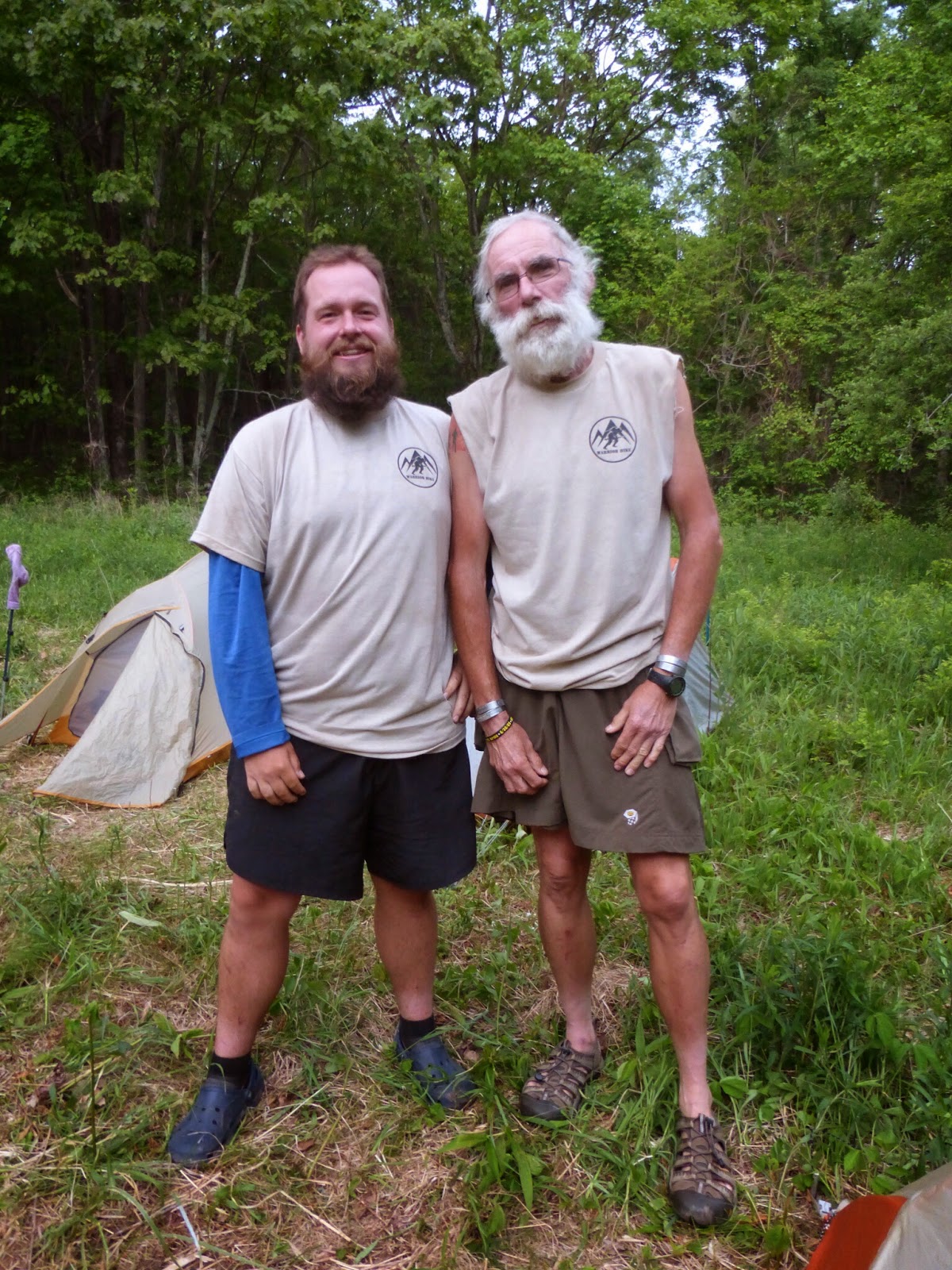 It was a very great and memorable day and I’m sure I’m going to sleep well tonight!