Those who have read my previous blogs know that I’m a Survivor fan and that I always acknowledge Day 39 because that’s how many days you must last to become the sole survivor! It’s funny because I woke up knowing it was going to be a rough day for me. I usually have two days of feeling pretty weak and crappy when I have my period and this would be the first of those two days. I woke up clammy and my pajamas damp from sweat, which is also normal during this process. I got my regular 7am start, but it was a slow start for various reasons. I was feeling weak and moving slow and I got signal soon after I started so I stopped for 25mins to upload the blog and do some emailing. I also came upon the other four Warrior Hikers camped a couple miles from the shelter and said hi. It was good to get some downhill and I came upon another suspension bridge. Some weekenders were there and I asked them to take a picture of yet another fun pose on a suspension bridge. 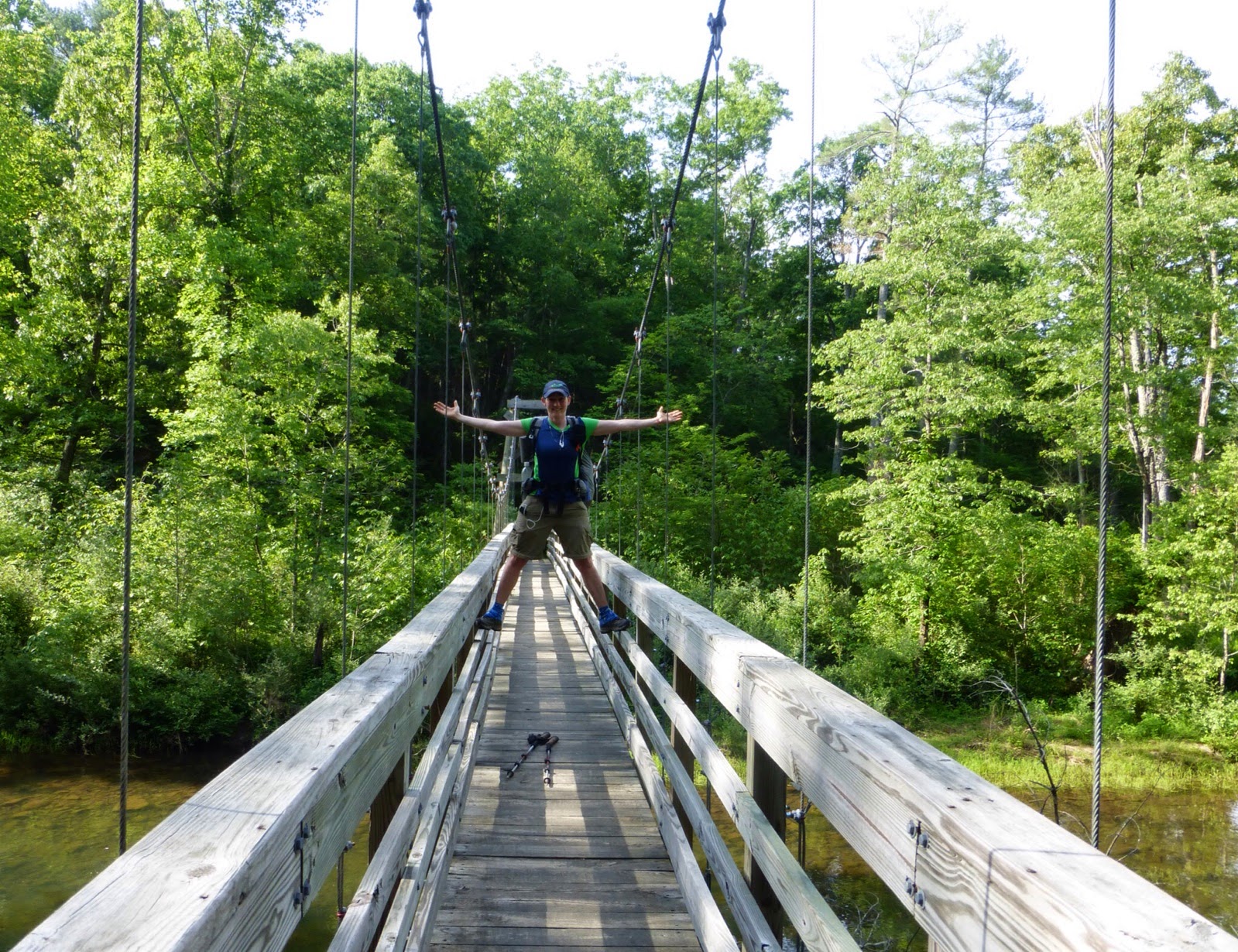 Right after the bridge, I began an upward climb when I heard someone yelling my name. It was one of the people who had taken my picture at the bridge and I figured I had dropped something. He was actually calling me because he had returned to his friends at the campsite and mentioned my trail name. It turned out one of the women there was a blog follower so they ran up the hill to catch me and get a photo. That was funny. Hi Ashley!

Soon after that, Bear Bag, who I had hiked with at the end of the day yesterday, caught up to me. I was feeling really crummy at this point and he was a good distraction and speedy hiker so I focused on sticking with him until he got about 5mi further to the road where he was headed into town. We hiked along a stream much of the morning so I got a picture of Bear Bag before we separated. 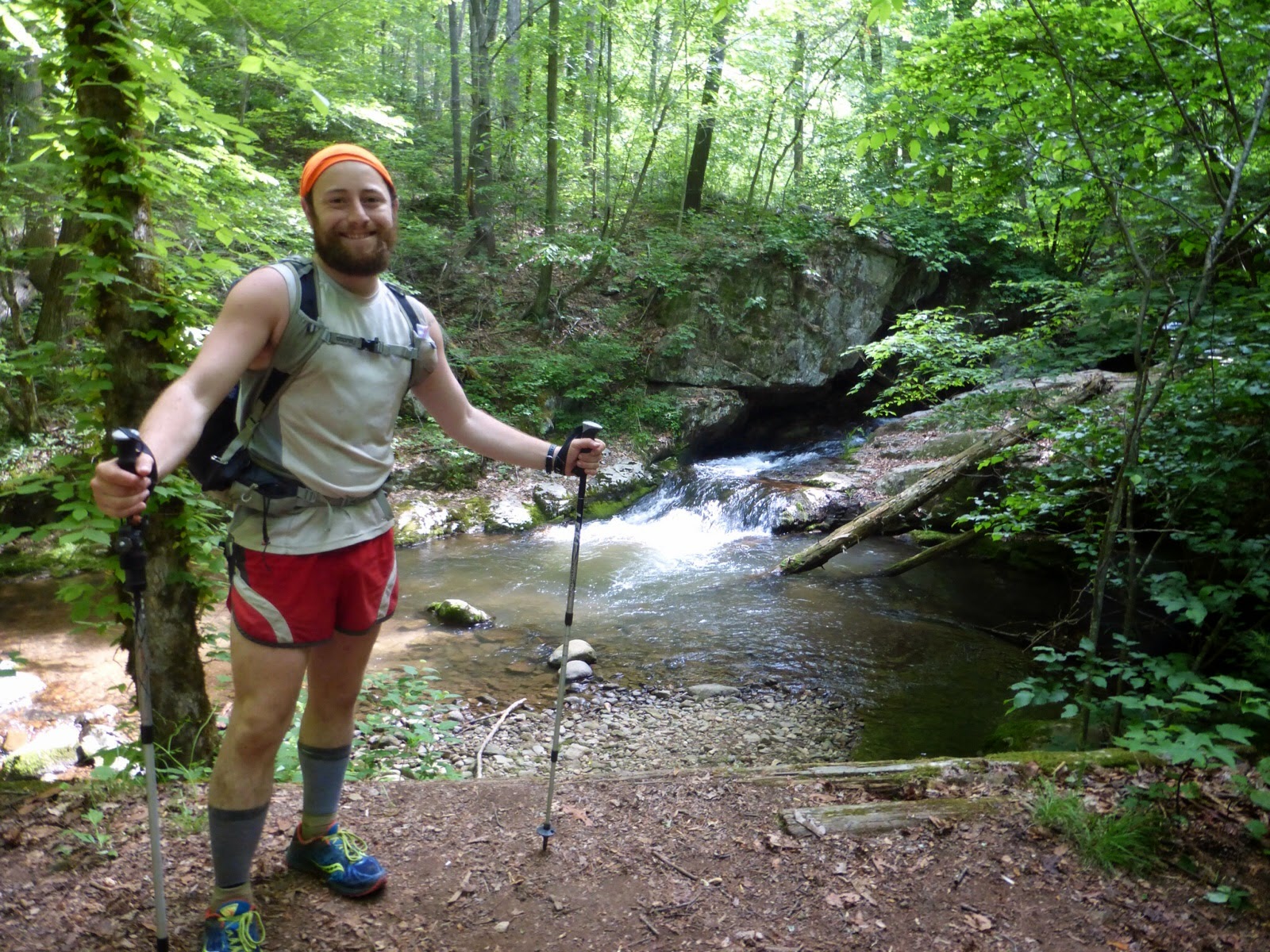 He was also with me when we hit the 800mi mark so he took a picture for me. It turns out that a hiker that Bear Bag has been hiking with is the one that’s been making the fun mile markers every 100mi. Problem is that I am camped with that hiker tonight, so I’ll now be ahead of him with no fun mileage signs. Bummer. I could make my own, but it’s not the same. Plus, he really enjoys doing it and has been doing it all trail. I want to point out that the sign behind me explains that for about a mile there, the trail went through the remains of the historic Brown Mountain Creek Community. It was a small farm community that freed slaves lived and built in the early 1900s. 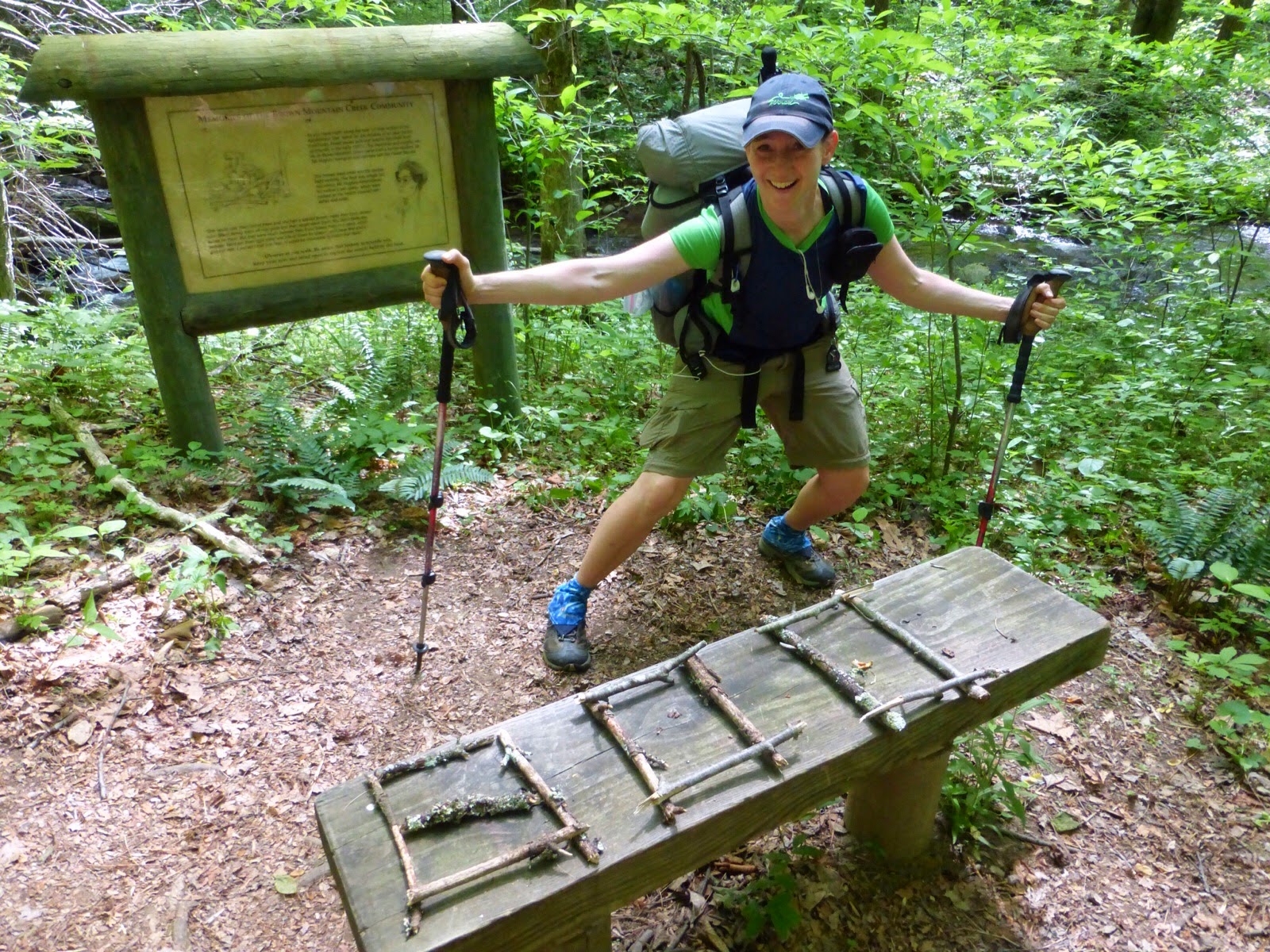 After splitting with Bear Bag, I had a looong climb and it was pretty warm out. Combined with the fact that I was already sweating without exertion made for an exhausting climb that felt like an eternity. Any other day, I would have gone up it at a steady pace, but I was out of gas. One mile in, I stopped for lunch to notice that the remaining water sources until the end of the day were off trail. It was only .3mi off trail, but that would mean .6mi total out and back and my body was having none of that today. As I ate lunch, two day hikers were hiking down to their car and I asked if they had extra water. They gave me plenty for the rest of the day. Score! That was a big mental victory for me, whew. The rest of the day I just focused on keeping forward movement. This was the most draining day for me so far this trail and I just wanted to lay down all day as my body felt like gravity was working double against it. Even raising my head to look ahead was something I had to force myself to do. The views were nice up top and there was a stretch called Tar Jacket Ridge that was really enjoyable with many day hikers along it.

For some reason I got strong cramps for over an hour around 2pm and that was really wearing me out. I’ve rarely had to pause so many times to motivate myself. I was really worn out. I had picked a destination in the morning which I usually don’t do, but I needed a set goal today. I made it to the shelter just before 6pm which is early for me to stop. Normally I would have hiked a but further, but not today. There are about 15 others camped here it seems, but all are nice and quiet and turned in early. I tried to show all the tents spread out in the roomy space here.

I happily finished early and am now finishing this entry just before 9pm. Last night I didn’t even start blogging til 9pm! I can’t wait to sleep and I hope I’m more energized tomorrow. Will be my last full day of hiking this leg, so it’s good to know I have some time in a hotel coming very soon! I planned that knowing I’d need time to recharge after this week. I’m sooo tired, but I’m cheering for myself for staying steady and for being a Survivor! 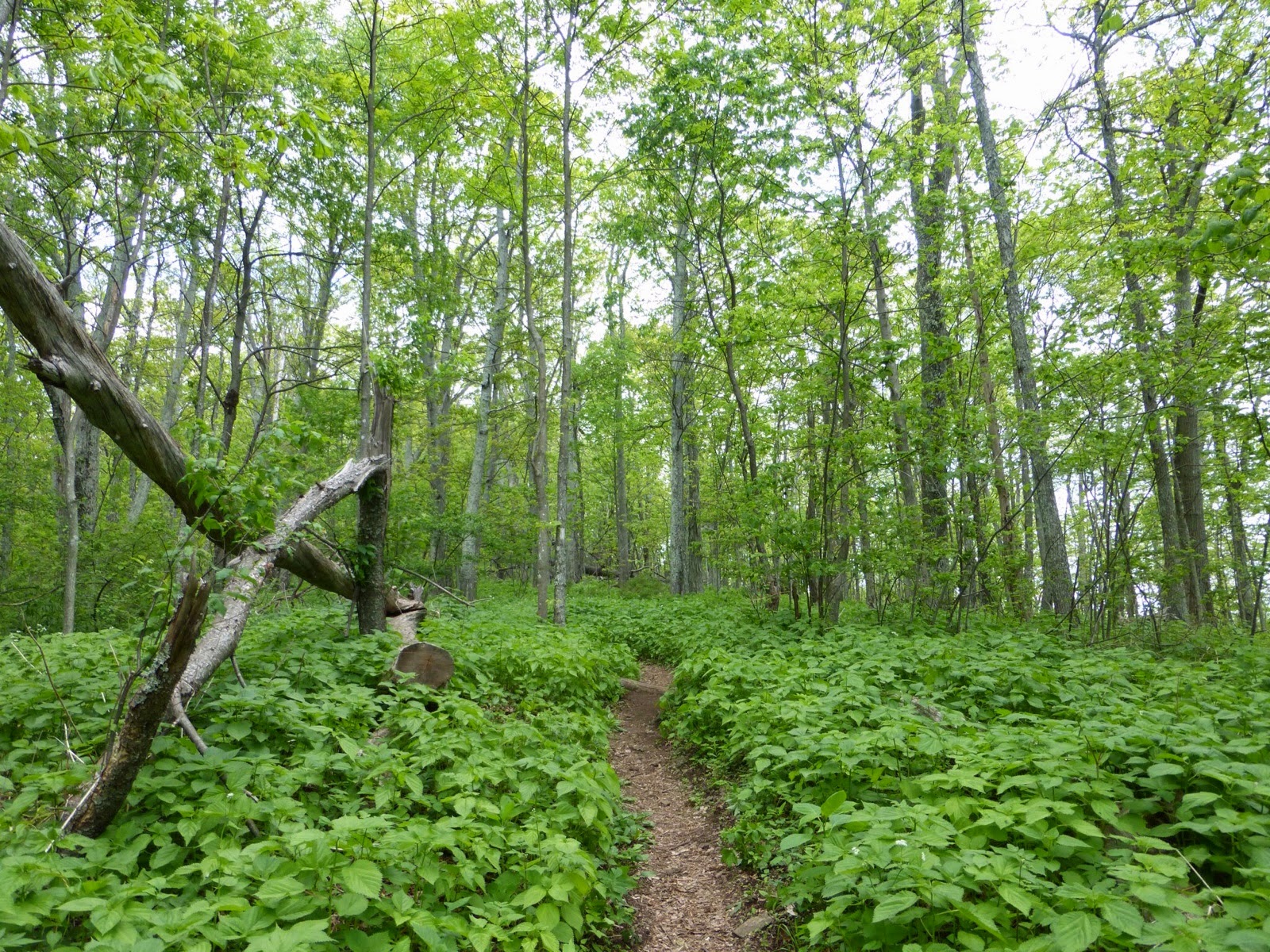 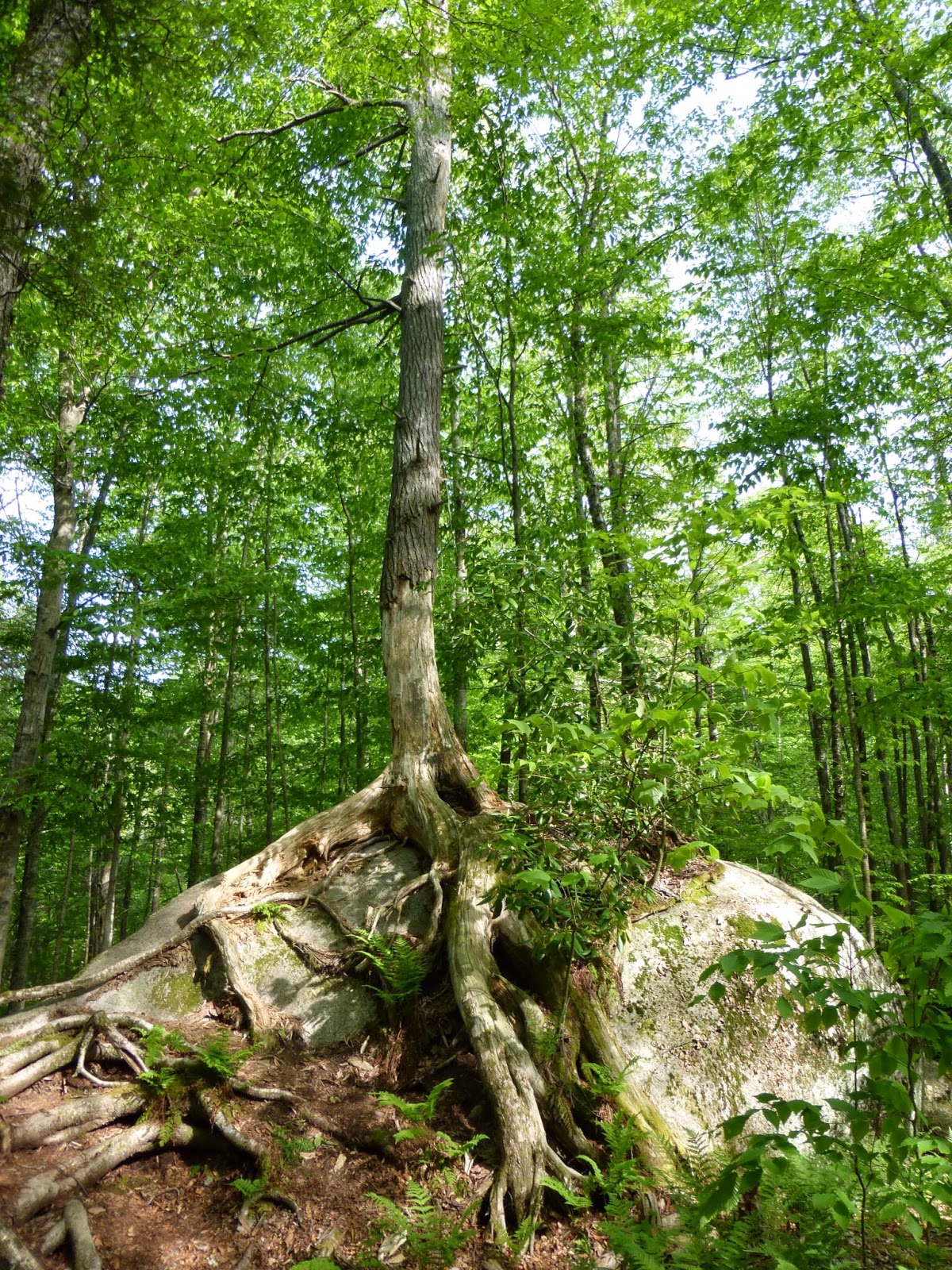 Oh, two more things. Ferris did get that trail magic yesterday and I’ve heard it was grand. Also, he is hoping to jump off the James Bridge that I went over yesterday. It’s a tradition on the AT and I wasn’t aware of it. Darn! That’s actually something I could have been convinced to do if I was with others jumping in. I met someone today who said it was really fun and that he jumped twice. There are few things I’ve missed on this trail and that will go high on the list now.