I was sooo happy to have a room to myself at the hotel. I got a lot done including some quality lounging. Of course I still woke up before 7am, but my body was still tired, so I watched the season finale to Greys Anatomy where they bid farewell to Christina Yang. I have to say that I enjoyed it and I’m still a big Greys Fan. I really liked the final scene with Meredith and Christina too. Funny that of all the songs in the world. they chose the song, “Where Does The Good Go” by Tegan and Sara, which is one of my favorites from them. Btw, T&S have scored this year with a commercial song, the main song in the Lego Movie, and now this. While I’m on this tangent, I am almost caught up on this season’s shows with just a handful of Community and Parks and Rec to finish up…Just in time for the new season of Orange Is The New Black to come out on Netflix too…may have to pick up a couple months of Netflix to finish out the hike, ha! Oh yeah, the hike…well yes there was some hiking involved today, but I’ll get to that soon.

I have scheduled out the next ten days because my step mom and family friends are visiting in Harpers Ferry and hiking out with me a half day. I also had to figure out my exact campsites for most of those days because today I entered Shenandoah National Park where that prefer that you camp at the shelters or formal campsites. The main snag with that is that some of the days I had limited choices that left me with a really big day or a shorter day. I tried to split it as evenly as possible, but I think it will be nice as I’m still able to average the 24mi/day I Iike to do on full hiking days. One day might be a 20 and the next a 28, but it averages out. It’s supposed to be fairly easy hiking through the park with many side trail options for waysides(small stands with snacks and ice cream) and restaurants so that will be fun. My first campsite in the park is only 8mi from town today, so I left town at 2:30pm after running a few errands. On the way to the grocery store, I immediately ran into Ferris and the others he hiked in with. They are being hosted by someone that gave them a ride to town and are taking a zero because they did 35mi to get to town last night since they got poured on and decided just to push to town. He wants everyone to know he did a 35mi day which is his biggest day ever! I had to get a picture because he shaved the beard which he doesn’t usually have in real life. 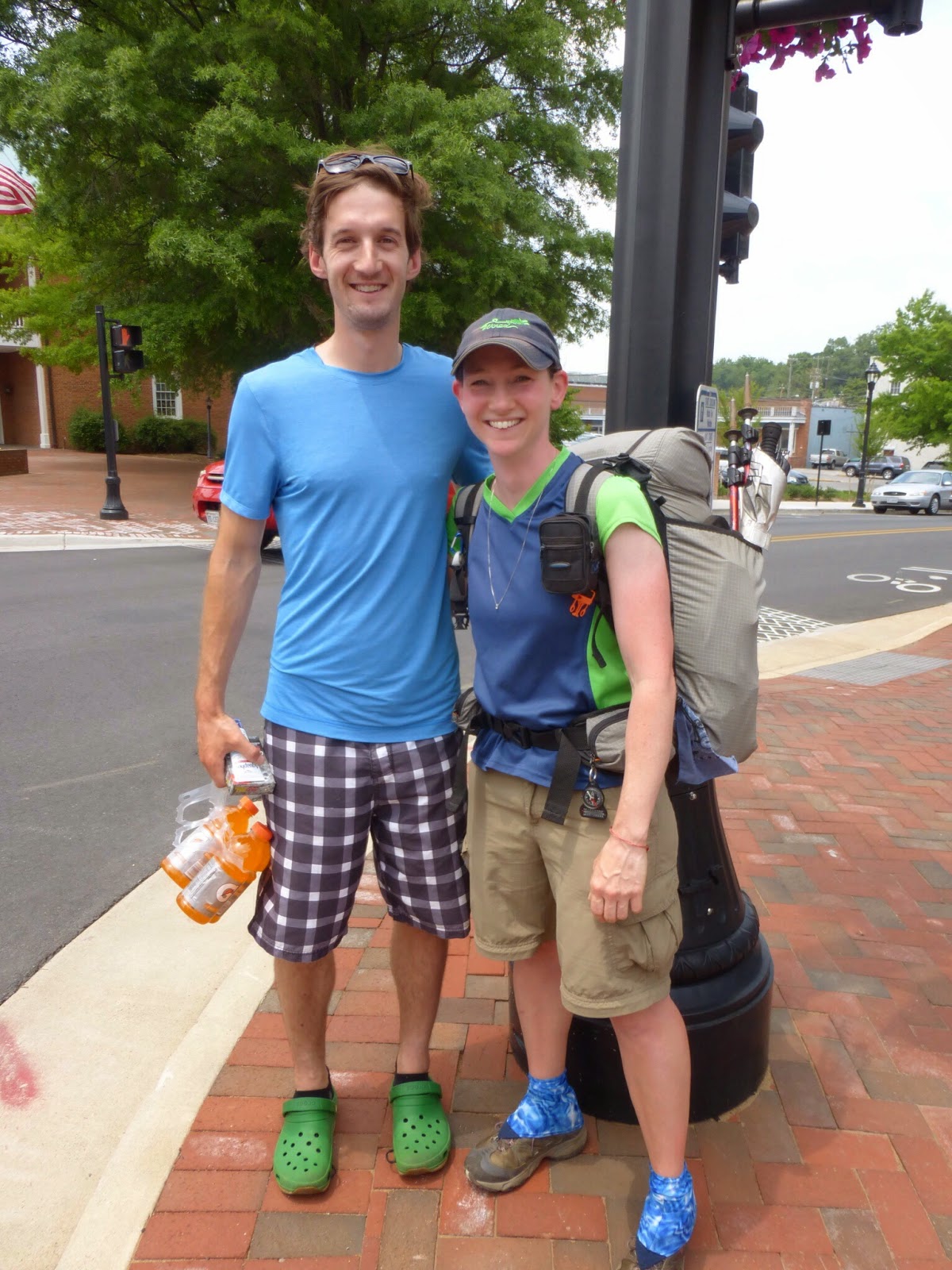 Then I went to the town’s all you can eat Chinese buffet which most hikers do in Waynesboro and it felt like I was in a casino buffet. I enjoyed it! It’s was only $8 and even had pizza, sushi, and chocolate pudding. I was stuffed, but was careful not to eat too much just before hiking out into the heat. From there another town shuttle volunteer picked me up on her way home from work. Thank you to Feather for getting me back to town and volunteering to help hikers! 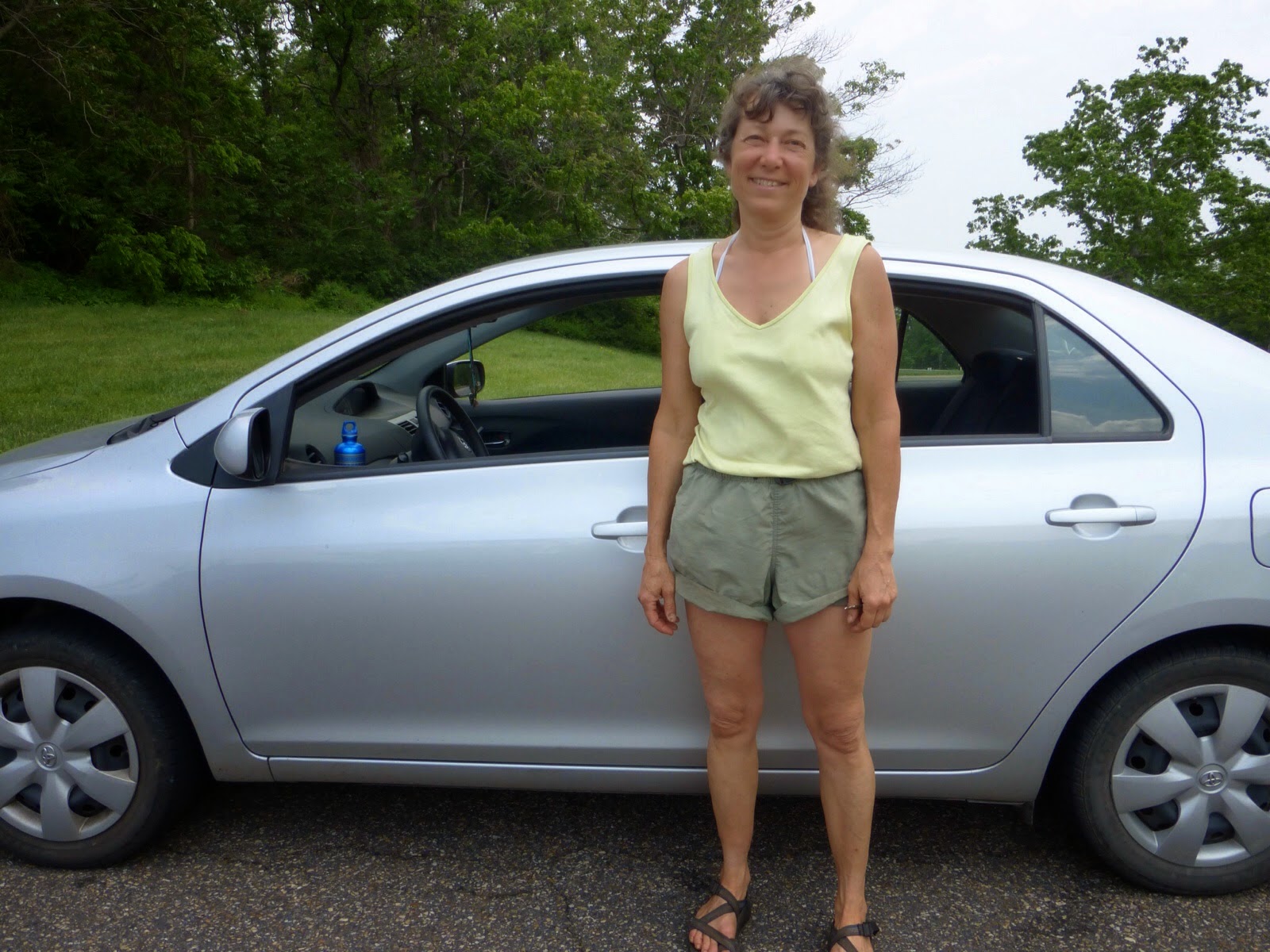 So I was on trail by 2:45pm and it was a slog with a decent amount of uphill and a full pack(and stomach!) in the heat and humidity. The tops of the climbs had towers on them today… 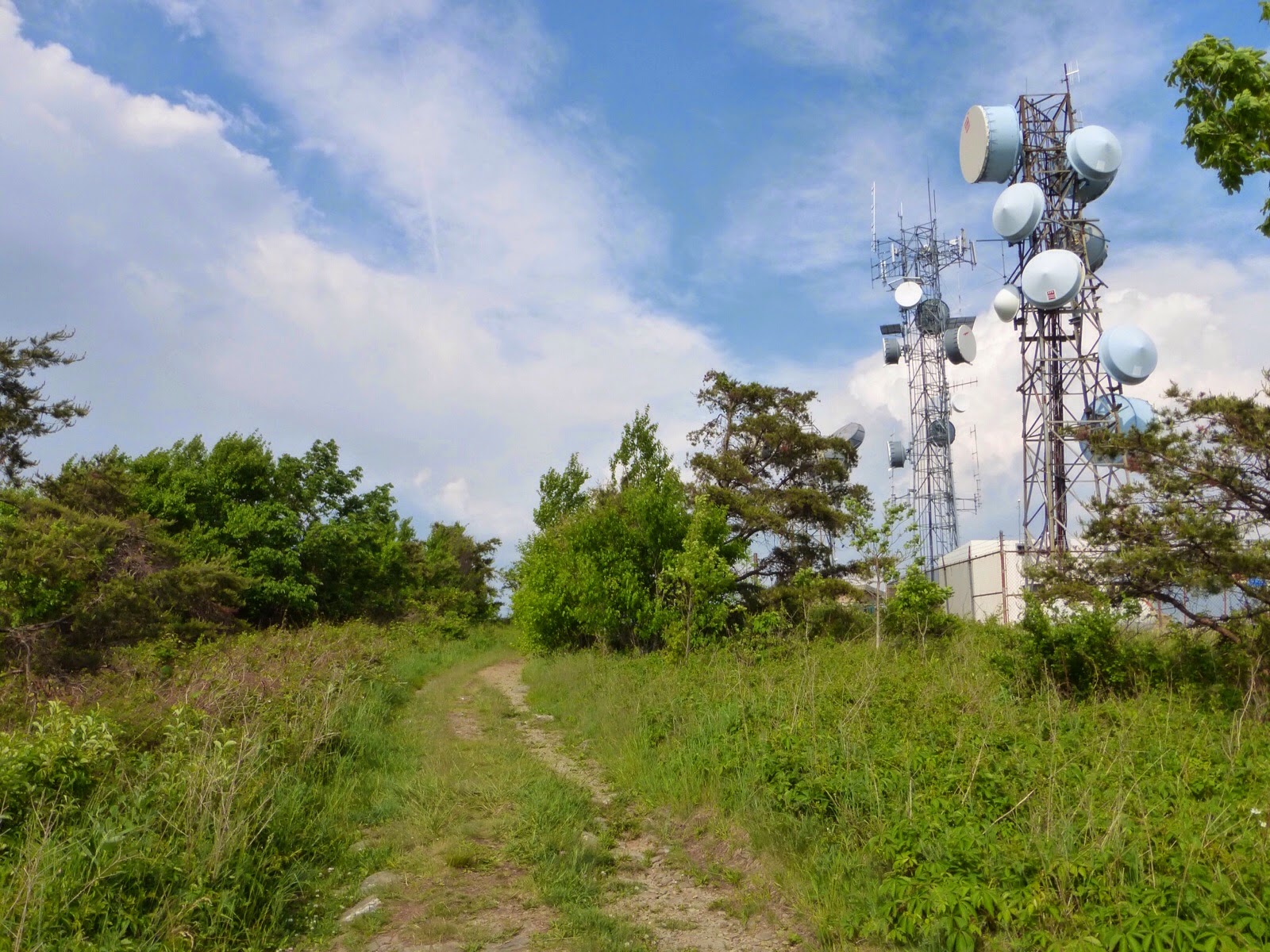 My hope was that the predicted thunderstorms would hold off til I got to camp, but thunder rumbled randomly as I hiked and clouds darkened. A double white blaze means the trail is turning. 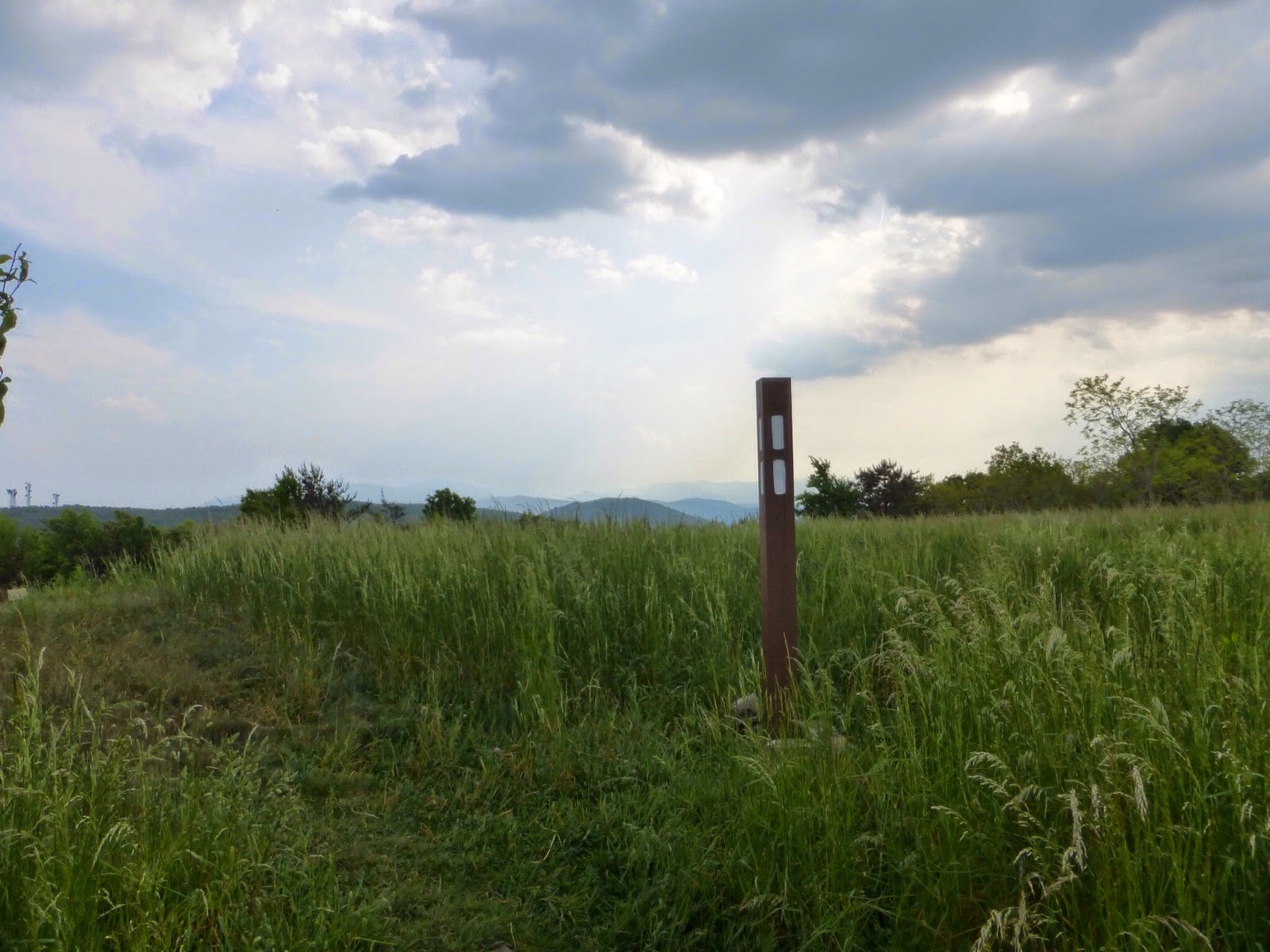 Soon into hiking today, I came across another one of those black rat snakes and those things are just freakin’ creepy! They seem like they know more than other snakes and they are so cool just slithering as they please. I’ve seen a ton on this hike and even watched one easily go up and down a tree as if it was a slide. Here it is just slyly hangin’ next to the trail. I swear every dark stick now makes me jump! 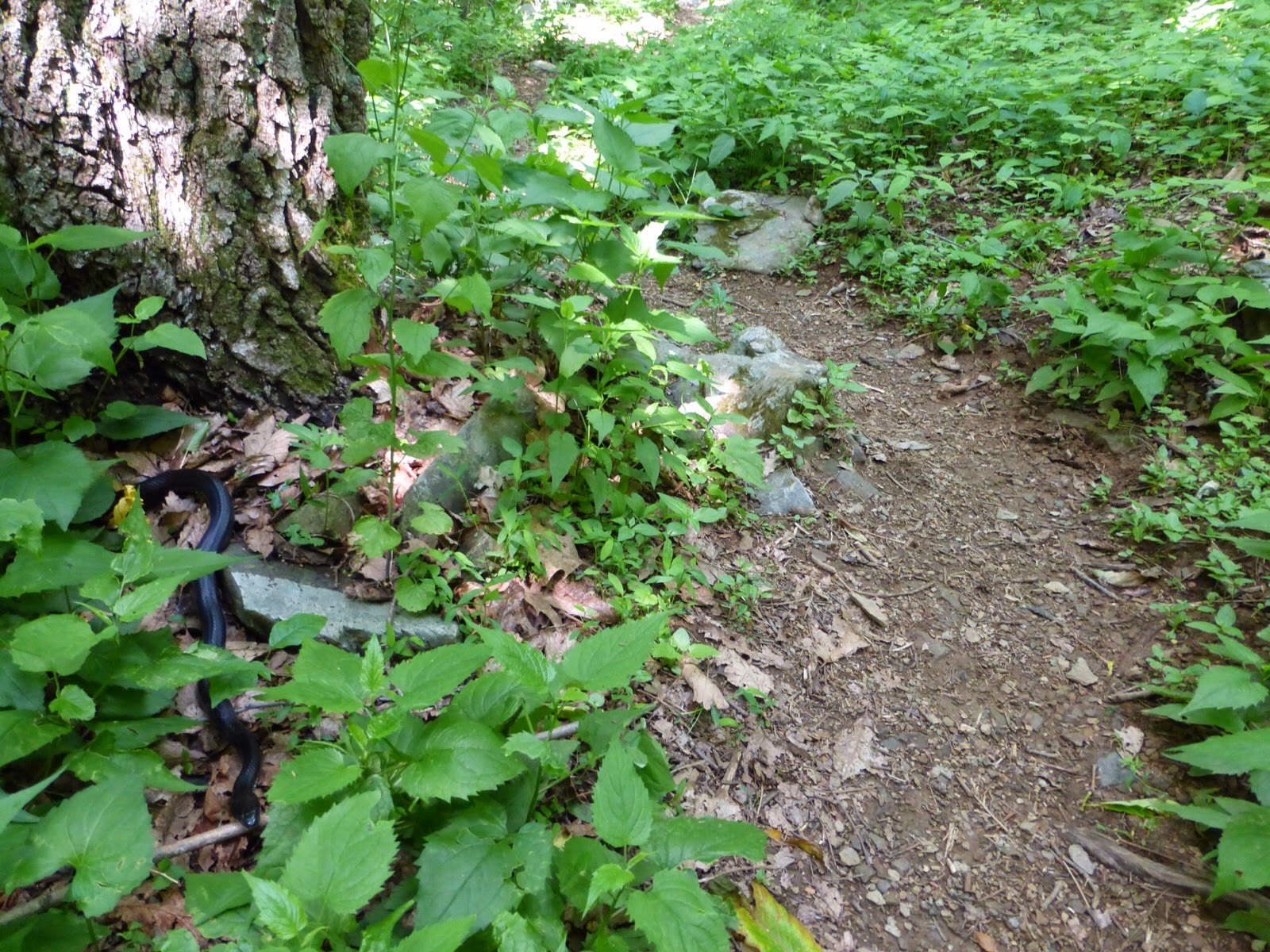 While in town, I was able to get the new Nickel Creek cd on my MP3 player which my sister got me. All Nickel Creek fans (bluegrass) were really bummed when they split up years ago and now they have come back together for this new album and a tour. I tried to resist since today was a short hike in and just couldn’t wait. I have to say on the first run through I’m disappointed. It doesn’t have the same feel and spunk of their other albums. I was really hoping for something more energized as I listen to them a lot while hiking and it was slower. I’ll have to give it another listen this week. 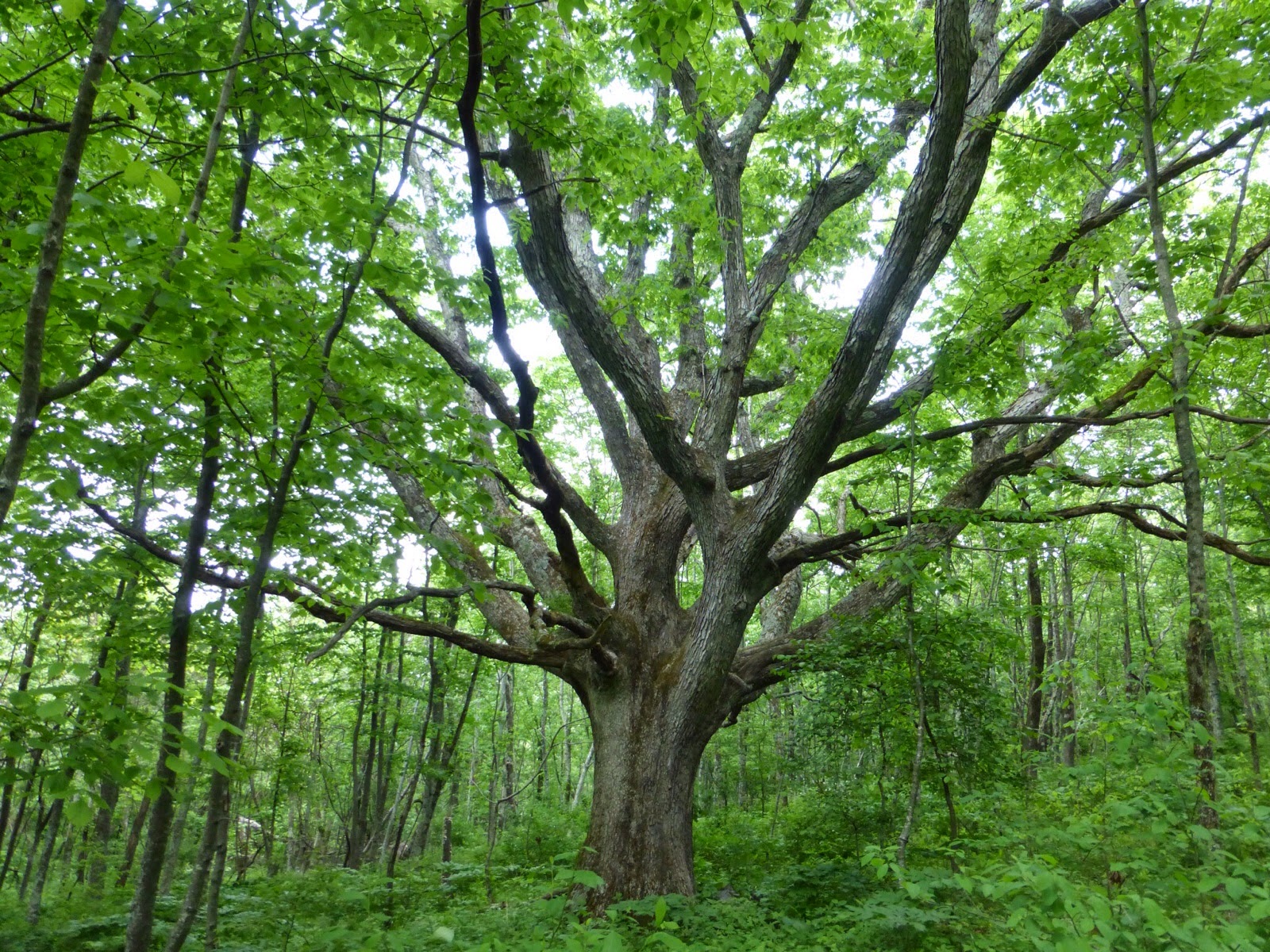 The other big sighting of the day was another bear! It was about 50yds from me just walking around in the brush with no concern for me. Before I could get the camera out, it had walked out of sight though. As a consolation, I did finally get a picture of a deer which was just 10yds from me and not scared at all. 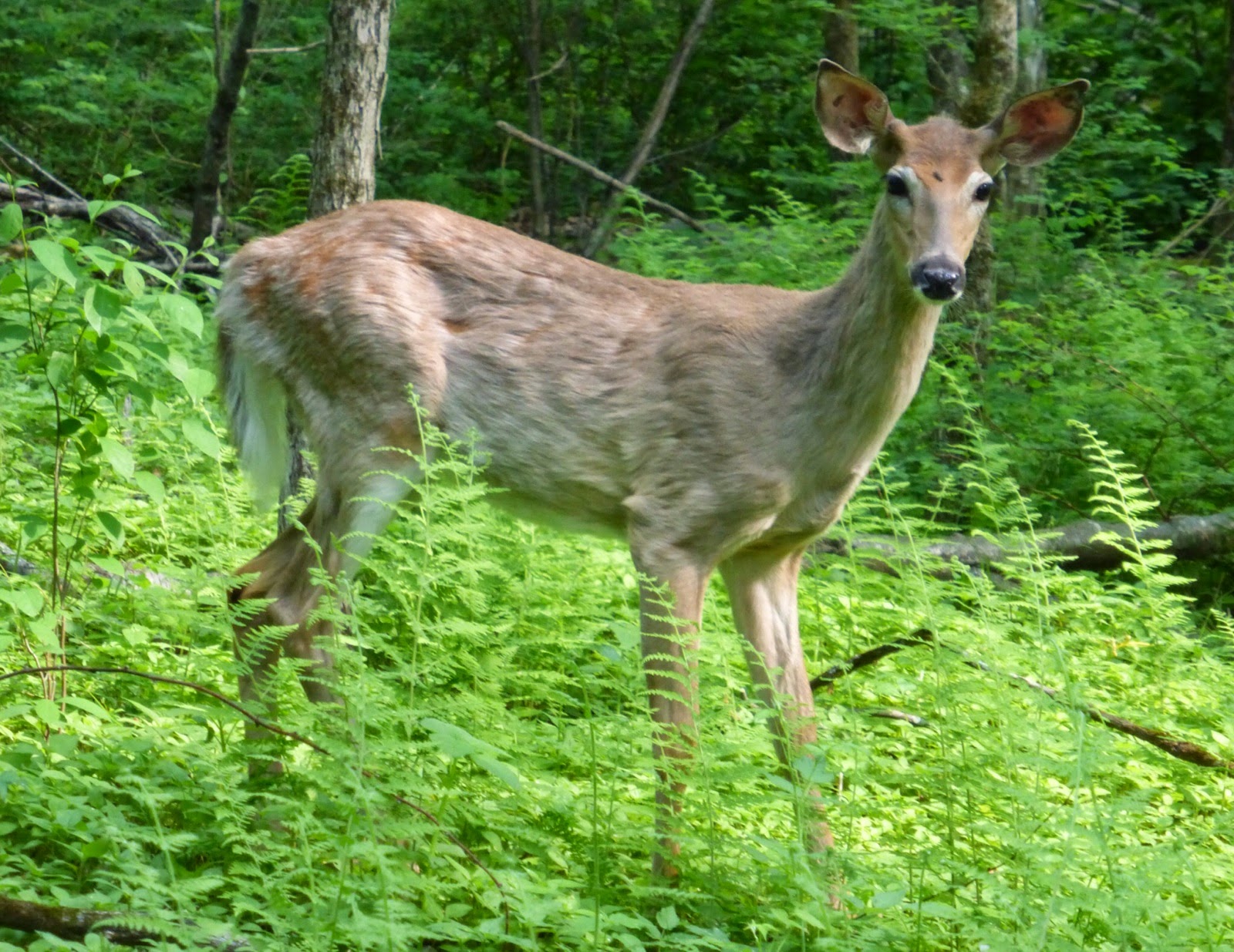 Something tells me the animals in the park are just accustomed to hikers which may not be a good thing as they don’t run away and seem to know we have food. I got to the shelter and camping by 5:45pm and two other solo thrus were there that were very chill and quiet. It seemed that they had been there awhile and were ready to turn in soon after I got there. By 7pm, it got darker and thunder got louder. I quickly finished dinner and hung my food on the provided bear hang just before the rain started. I got a camp picture just before it rained too. 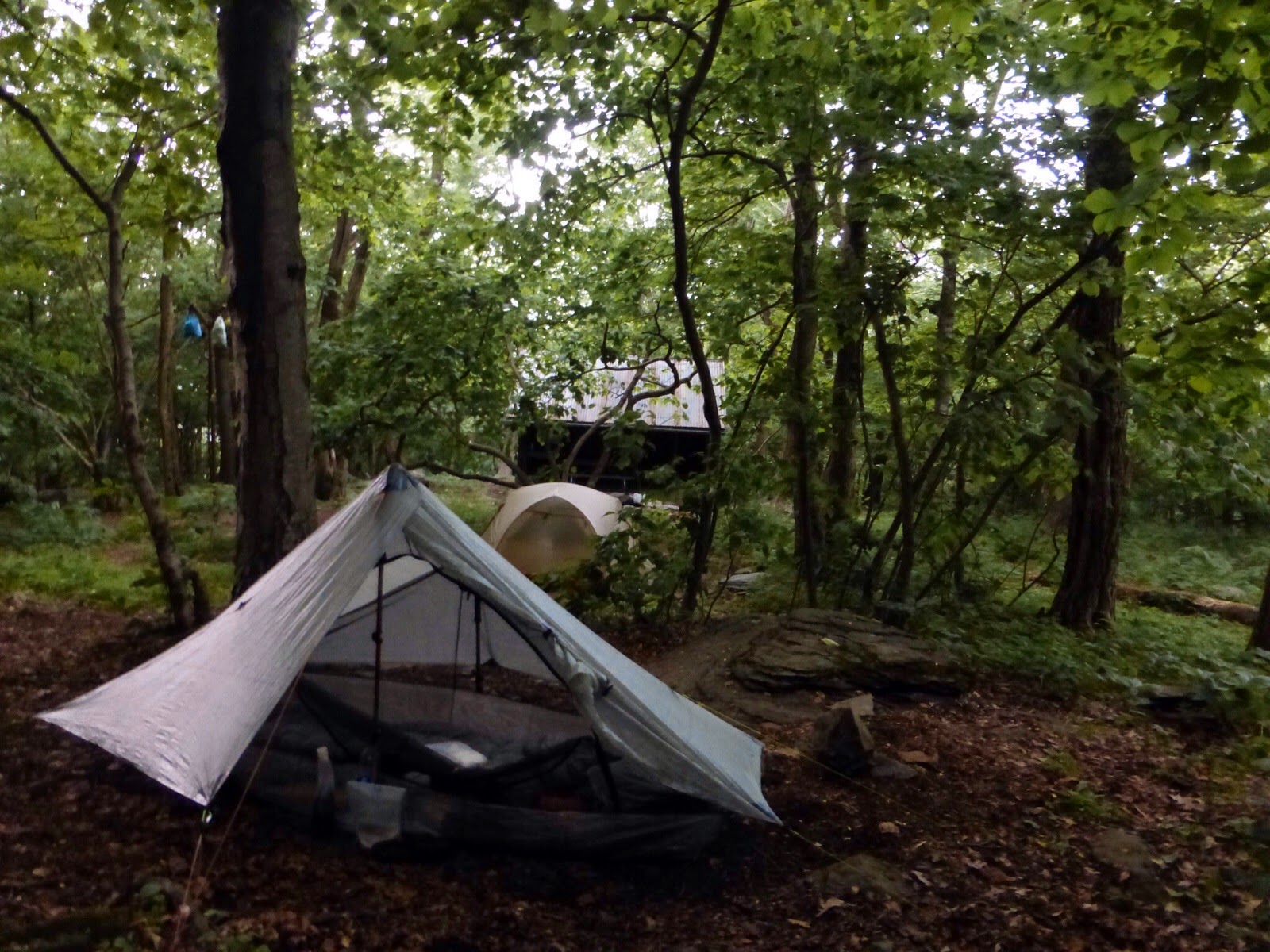 The rain has now been going in waves for 2hrs and it has cooled significantly. It seems to be dying down, but was hard for a good 30mins with loud thunder and lightning. I tried to do audio, but I’m not happy enough with it to post it. I’m great in the tent and totally dry, but again when it got really hard, I found that it was splashing and somehow misting onto the mesh mainly in the doorway so I opened the umbrella as I’ve done before for added protection and used my sit pad and rain jacket if I felt like it was splashing. I’m totally dry, but I’m also camped in a very sheltered spot with no wind and the leaves on the trees absorbing much of it. Just something I want to mention to those interested in this tent. Probably as good as tarp tent can do, but may not do as well as a heavier free standing tent. Great in regular rain, but not 100% in the downpour. But I like it a lot! Plenty of space and the cuben material stays taut and dry. I’m dry and it just thunder stormed, so I can’t ask for more than that.

I realize I’m writing a lot, but I have the time and energy so I want to add one more thing I’m excited about. When I’m off trail, I get the magazine, Entertainment Weekly. I realized I can get it on my phone for free with the subscription so I loaded a bunch I’ve missed since being on trail and am going to read one tonight. One has Orange Is The New Black on the cover and the other has the movie The Fault In Our Stars which I listened to as an audiobook last month on the trail. I’m just very happy to have it while the rain falls down and I’m comfy in my sleeping bag.