Day 44: Walking With The Kallins

Today is my lowest mileage day through Shenandoah. I’m limited in my camping choices each day because of the schedule I’m on to meet people in the next two towns and SNP’s understandable preference that hikers camp at the shelters. I only needed to do 21mi on very nice trail, so I planned to take the day very relaxed. It sounded like it rained most the night and it was still raining and quite foggy this morning. Kickapoo was up early as she was pushing to the further shelter to stay on her schedule to meet someone in town. She said bye as I was lying in my tent doing some offline catch up on emails hoping the rain would stop. She said that it had stopped and that it was just the dripping off the trees. I tried to lay there longer and ended up getting packed up by 7:45am. The Kallin family was also getting ready and they were planning to also do 21mi to the same shelter. Momma Bear said that this morning Robin Hood (age 9) woke up and his eyes flew open alert and he said, “I have to draft off Wired today!” Yesterday, they mentioned that Robin Hood and Cartwheel(almost 8) are most motivated when they find another hiker they can talk to and “draft” behind. They amazingly keep pace without even noticing how many miles they do when they are excited to hike with someone. They have yet to take a full zero choosing to do long double neros back to back sometimes and are consistently doing 18-20mi days. As I took down my tent, Robin Hood and Cartwheel watched me as they ate their breakfast saying that they wanted to hike with me. Who could say no to this!? 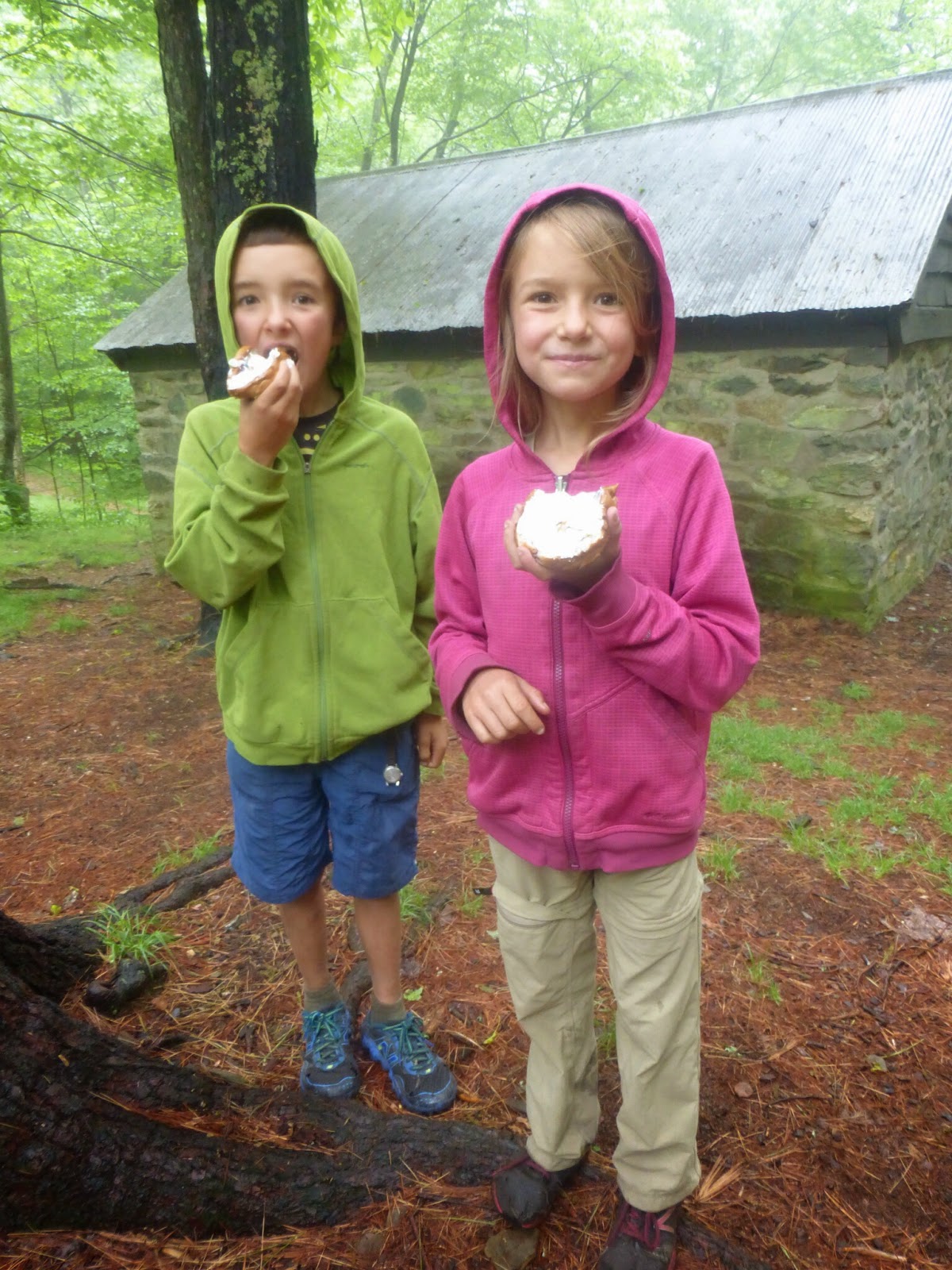 Their parents were still packing up and I figured they’d be awhile so I went ahead and put on my pack guessing I might see them later if I stopped to blog or dry things out in the sun. Robin Hood and Cartwheel quickly did the same and grabbed their packs hiking poles. They were excited! 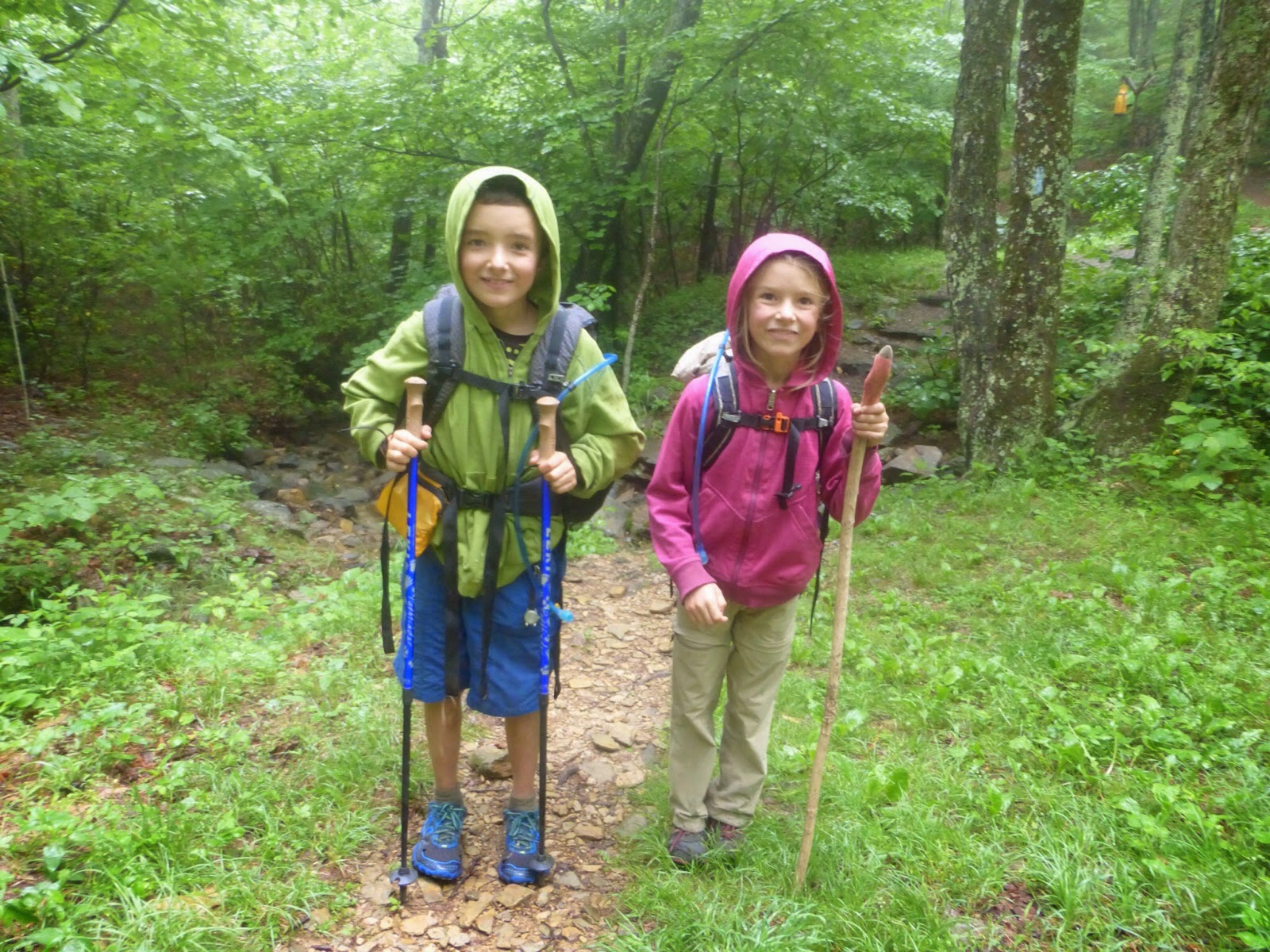 Their parents, Momma Bear and All In, said the kids could hike out with me and that they would catch up in a bit. I wasn’t sure what to expect and they were great! They easily kept pace, were right on my heels, and were really motivated so I decided it would be fun to spend the day with them. Momma Bear soon caught up with their dog Orion, and we all hiked together. 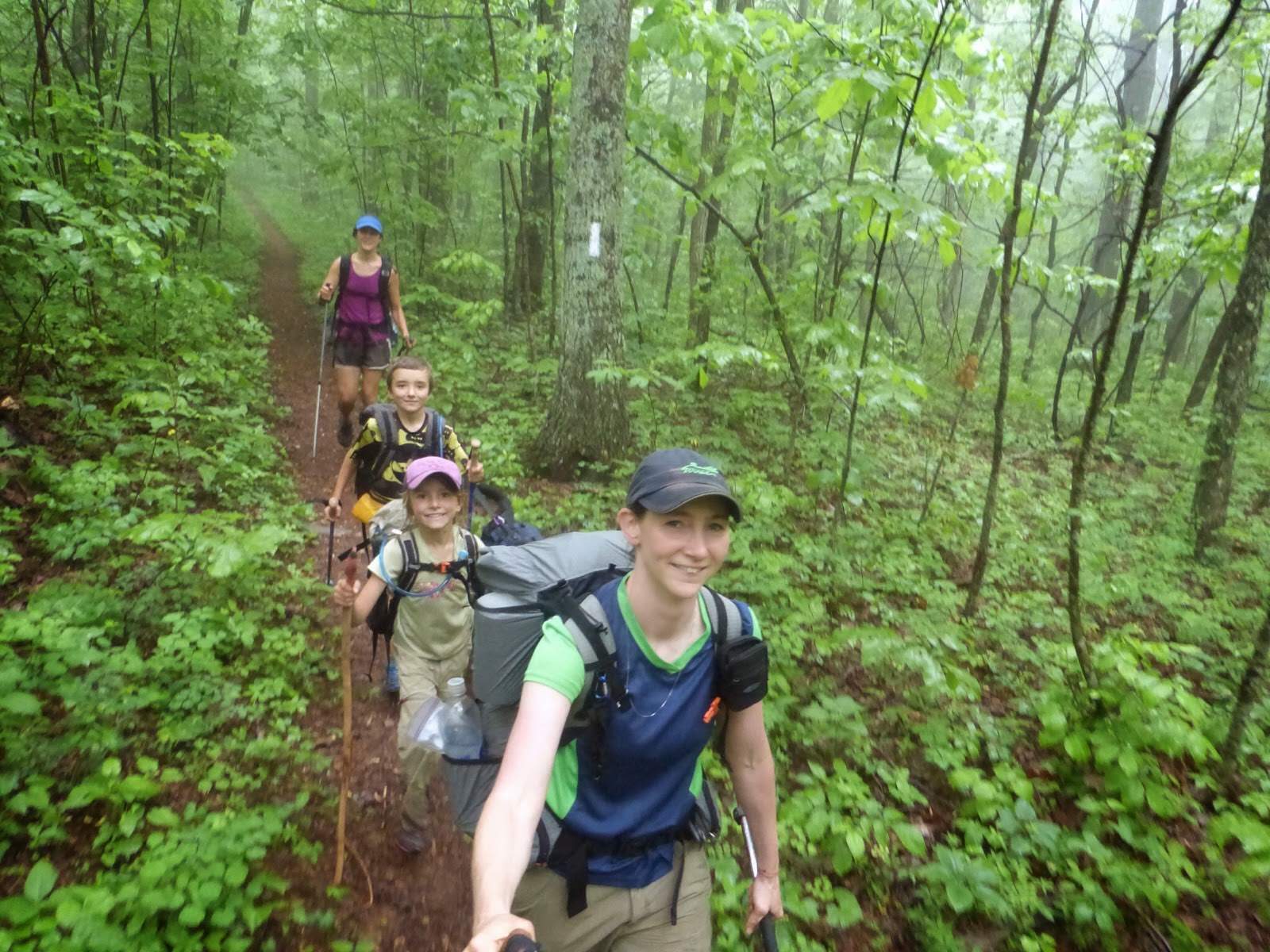 The weather was still very foggy and damp the first half of the day. This is the second day in Shenandoah and we missed out on the views again. We did, however, get a Wired pose photo at a viewpoint just for fun. 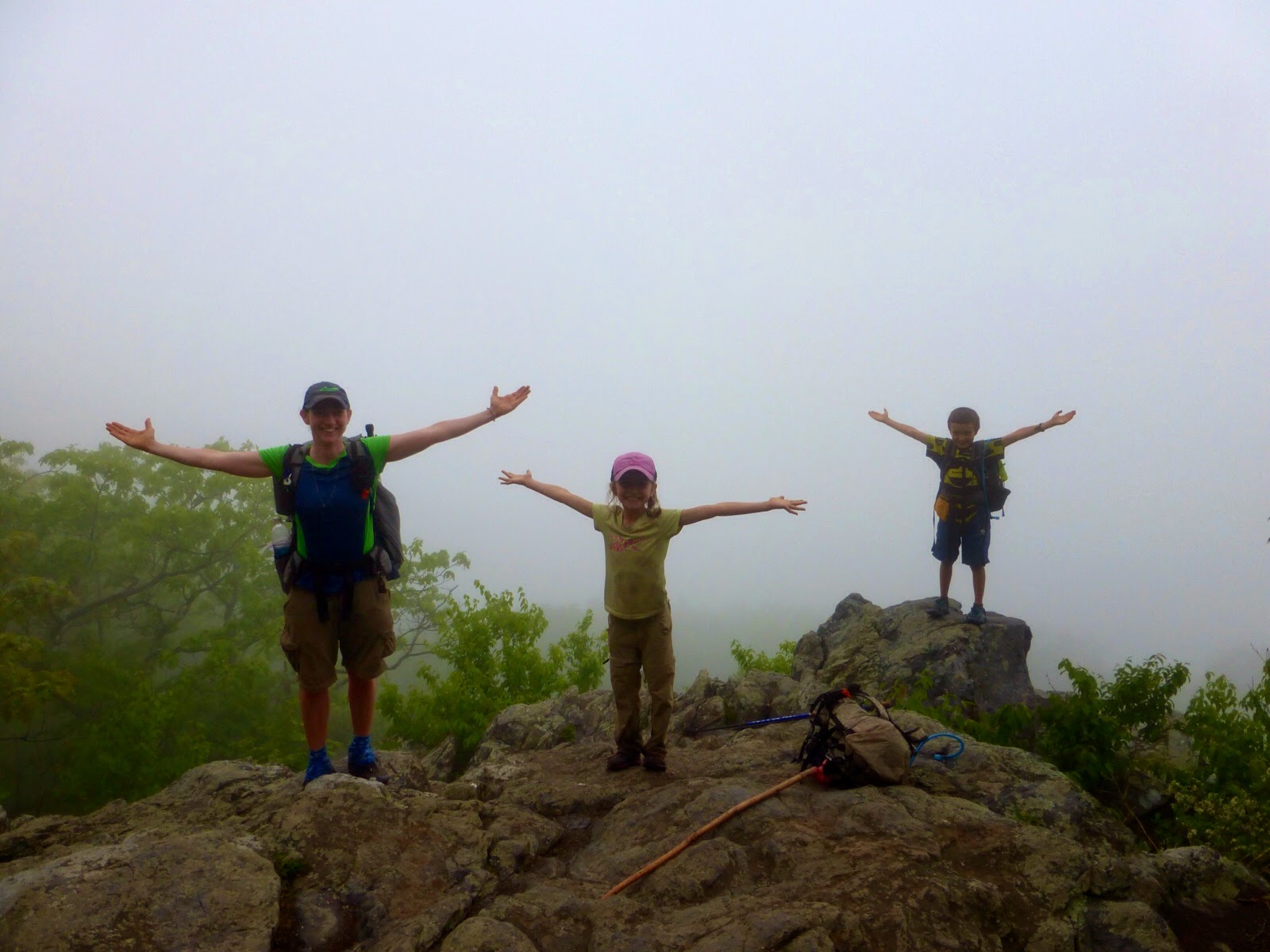 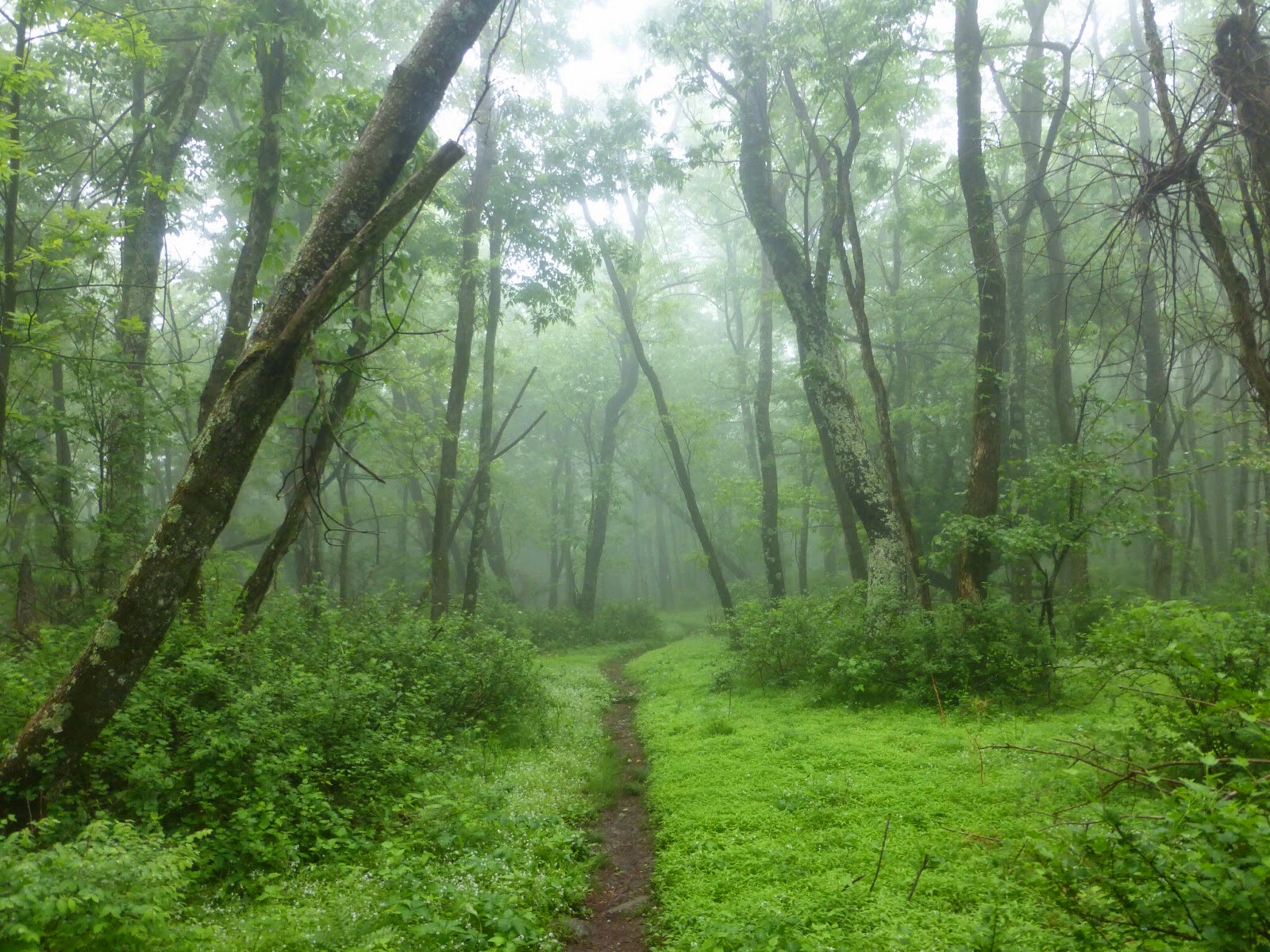 It was great to hike with the Kallins and again, I recommend their blog. They are just awesome. Momma Bear and All In hiked the AT southbound in 2002 and continued their outdoor adventures once they had kids. Robin Hood and Cartwheel absolutely love every moment of it and are great to hike with! They had me lead with the kids behind and I didn’t have to adjust my stride at all. Sometimes I jog downhills and the kids asked if we could run the downhills without me even mentioning it! The trail in the park is so gradual and clear that it’s easy to run. Cartwheel and Robin Hood would ask if we could run as soon as the downhill started and loved running the downhills. These are my kind of kids! They had fun picking up the small reptiles we saw today. A salamander that had lost its tail, a little frog, and a newt. 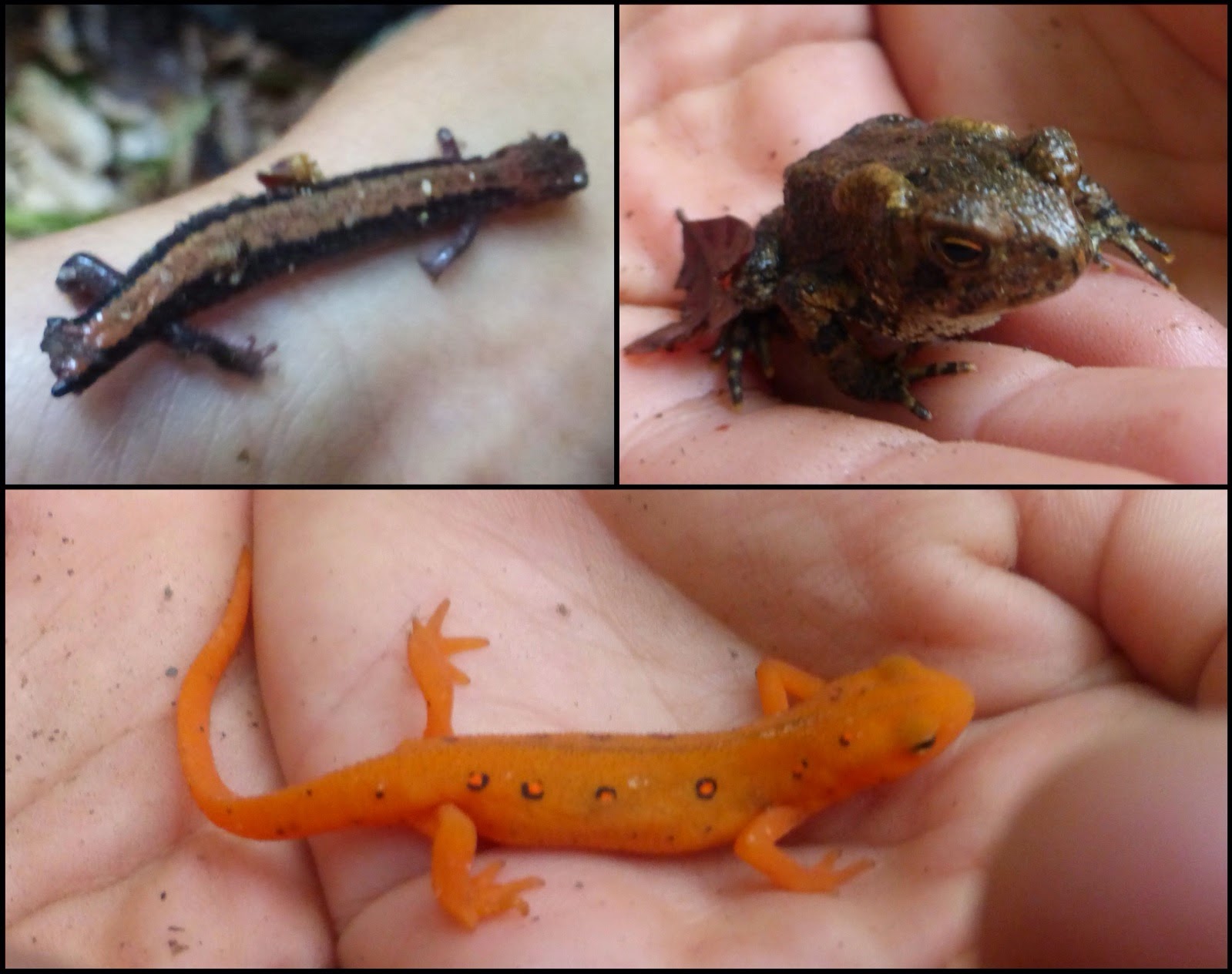 We were all really excited to reach mile 900 this morning too. We are now ahead of the hiker that made the mile markers so we made one that we are quite proud of by laying rocks on leaves. We took a group StickPic photo and left it there for the other hikers to enjoy. I love this photo. 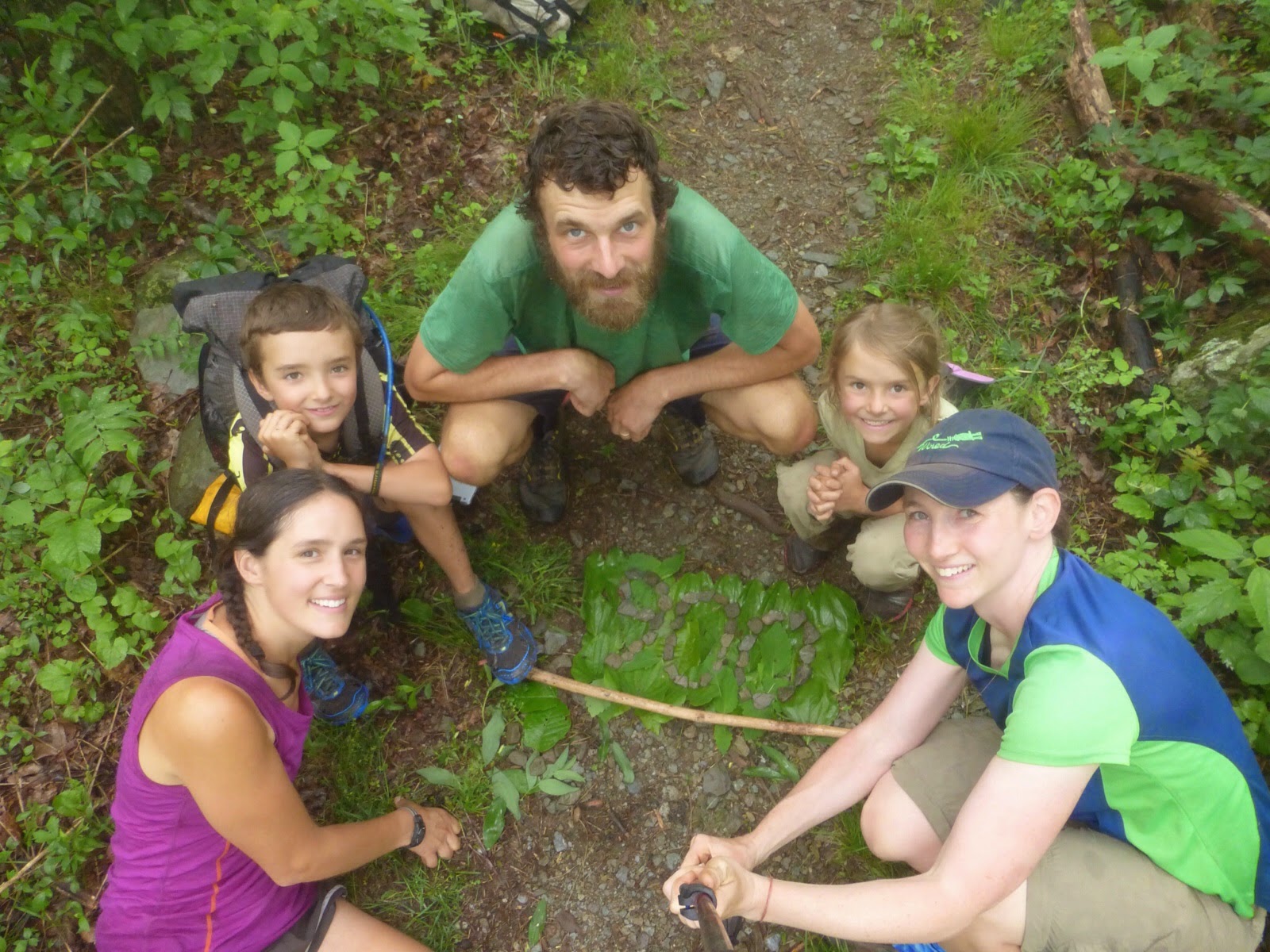 A bit of sun finally came out when we had lunch at a picnic area and we were able to mostly dry things out over a longer lunch break. We ended the day by stopping by one of the many camp stores in the park that has snacks. We got ice cream and then hiked out with chips and salsa to have with dinner. While there, we saw more hikers also headed to the same shelter. 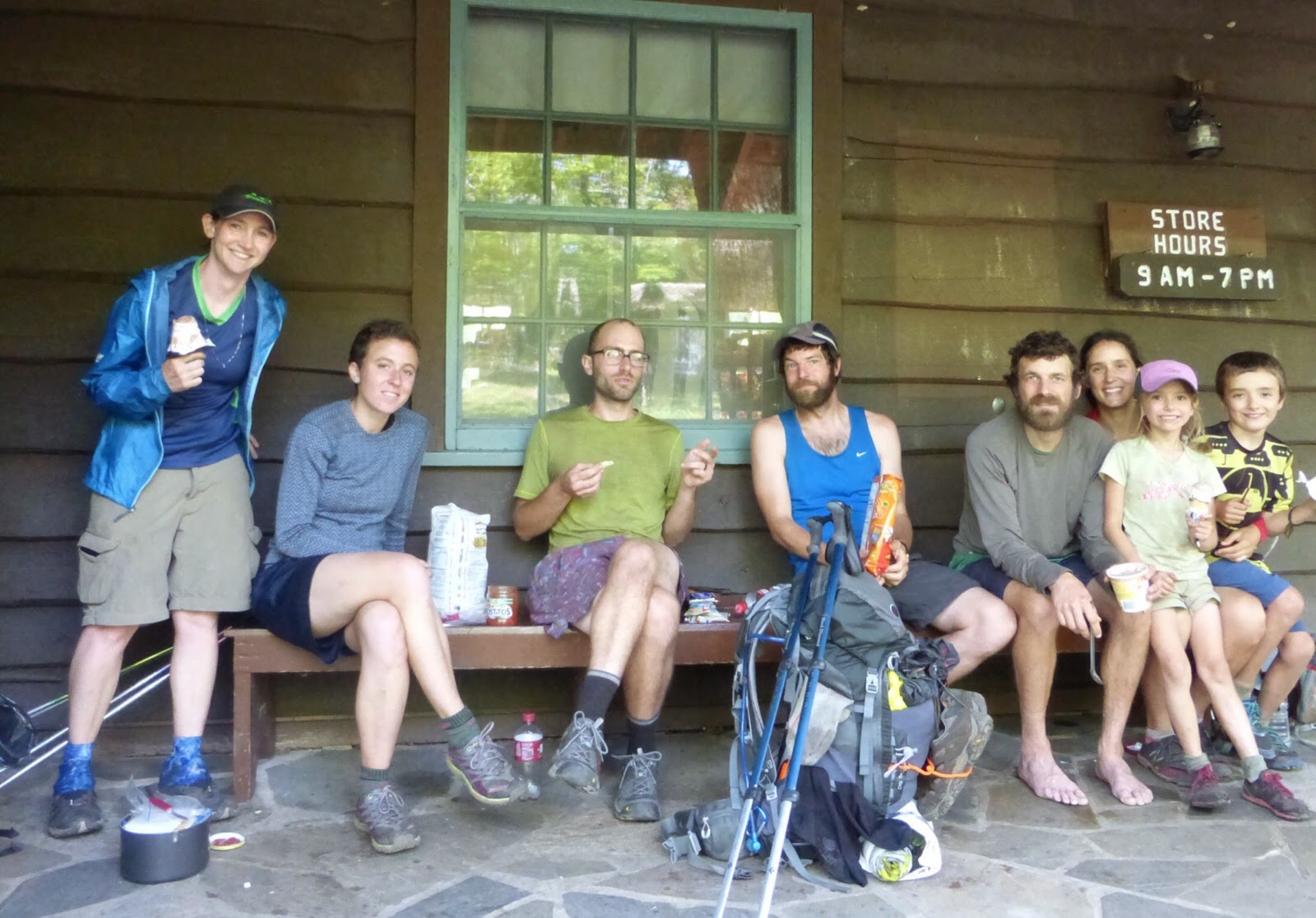 We got to camp by 6:20pm. It was a great day and it ended nicely with everyone having dinner by the shelter. 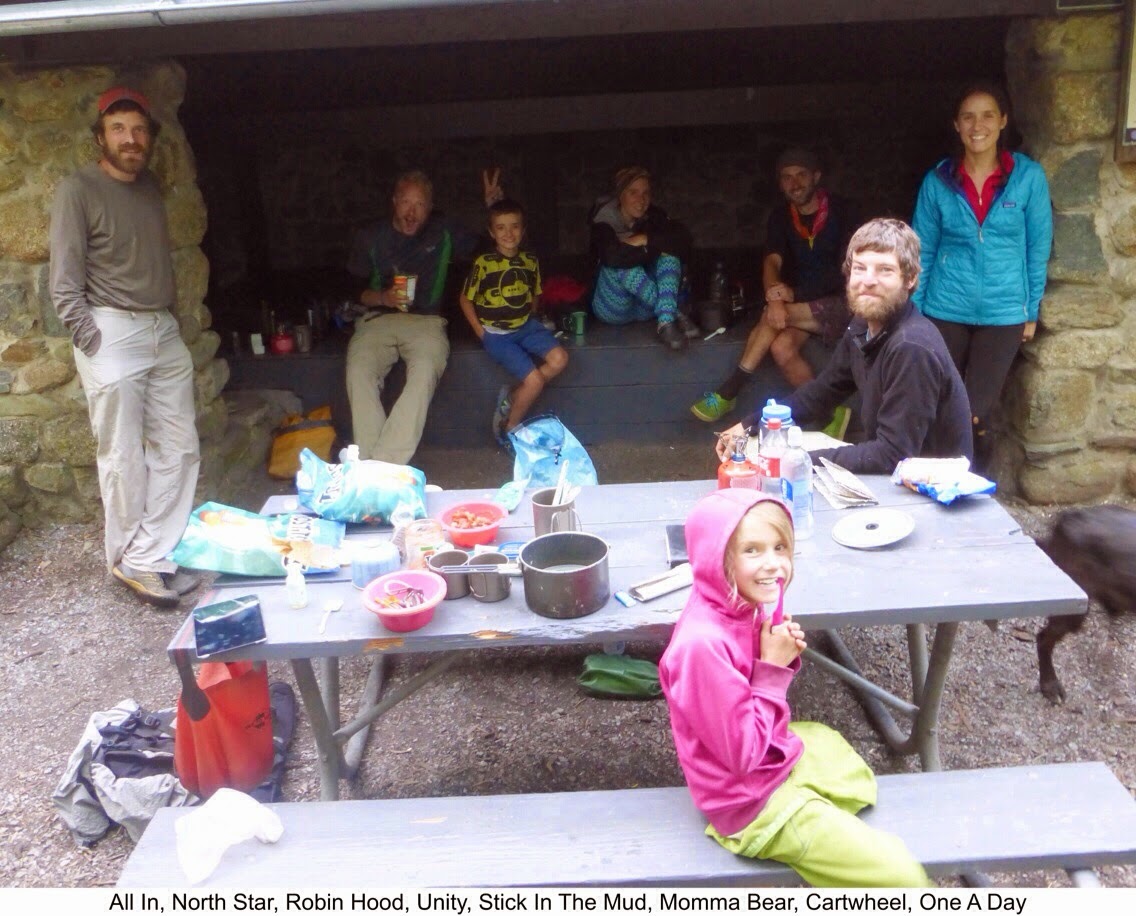 Cartwheel and Robin Hood were excited to use their hammocks which they just got recently now that it’s getting warmer and there isn’t any rain tonight. So cute! 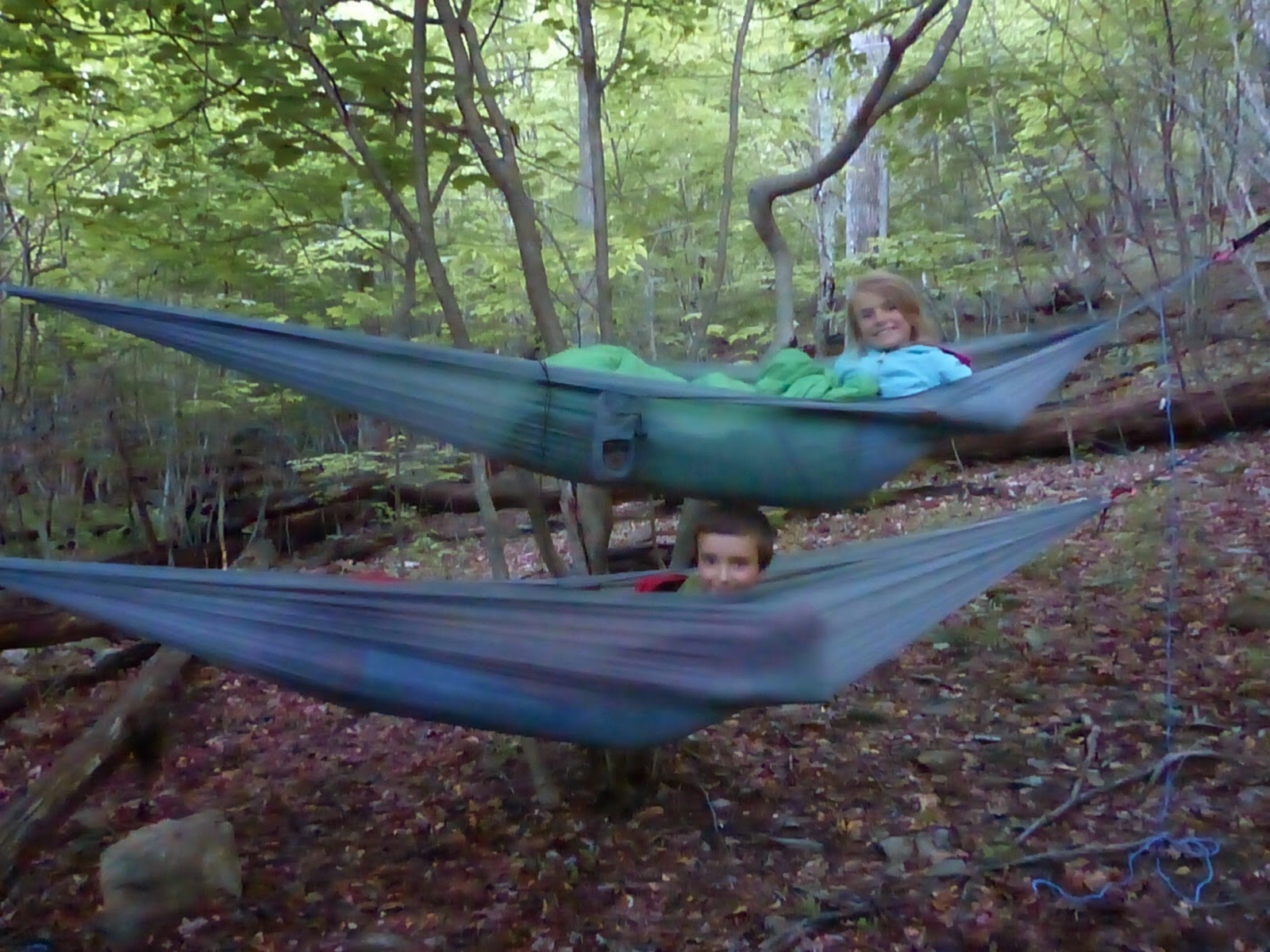 I’m camped just two sites away as they are all lined up nicely. It was a nice way to spend a day and they are just the coolest family. Great quality people who have kids that love to hike. They are livin’ the life and are rockin’ the trail like it’s a cake walk. Just awesome and it was really great to spend a day hiking with them. Tomorrow I have a 27mi day planned and Robin Hood says they may try to get there as they’ve done a 25mi day before. He was already comparing the elevation chart to today’s saying it looked easier than today so it’s possible. Either way, they hope to get to town a half day or so later than me in a few days and possibly stay at the same hotel as me, so I may get to see them again. It was a fun day. 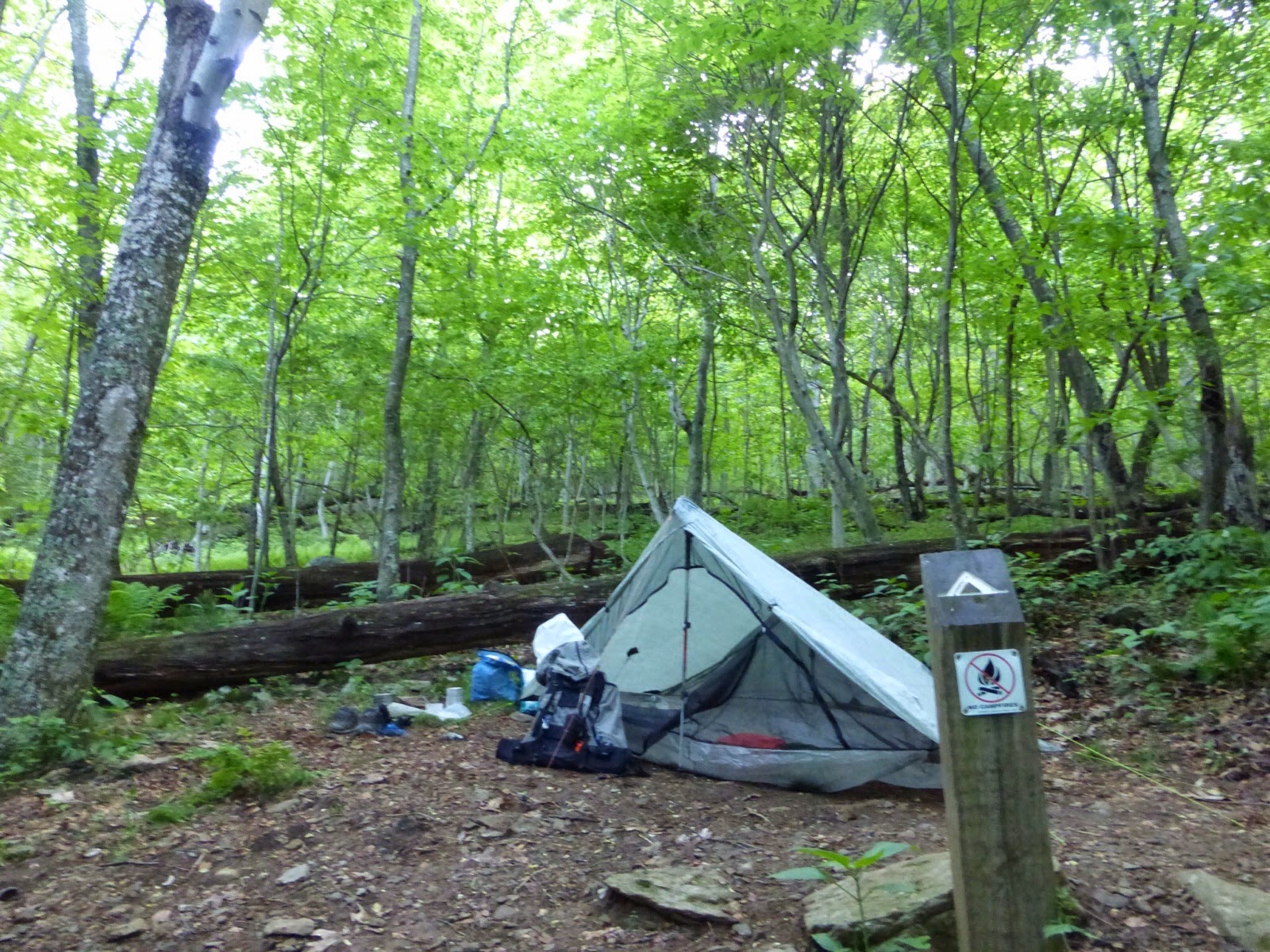