After yesterday’s big mile day, we weren’t sure how energized the kids would be, so the plan was for me to do my regular thing and the Kallins (check out their trail blog!) would try to make it to my planned endpoint at a shelter 24mi away. Mama Bear and All In don’t wake the kids up in the morning and let them sleep until they wake on their own. Cartwheel and Robin Hood were sound asleep as we packed up around them. Just as I was taking down my tent, Robin Hood popped up and was visibly groggy unlike the other mornings. I told them they’d probably catch up to me as I planned to stop to do some emailing and blogging once I got service at the top of the first hill in the first couple of miles. I left as they were eating breakfast. Within two minutes of walking up trail on my own I heard footsteps running up behind me. It was Robin Hood! He still looked tired, but just couldn’t let me leave without him. He said his parents were doing a relaxed breakfast with Cartwheel and would catch up later. I swear he is one of the most motivated kids ever!

We walked a couple of miles and I got service. Robin Hood was excited to lay down and got comfy. He and Cartwheel are so self aware of timing that he realized he could take the opportunity to poop so we wouldn’t have to stop later and he went off to do that. After 15mins or so, the rest of the clan arrived. It’s been fun because they also have Verizon and have to do blog posts and emails, so we all appreciate breaks where there is signal, ha! Most times the kids and Mama Bear will hike ahead while me and/or All In do things online and then we run and catch up. It’s been working out great. 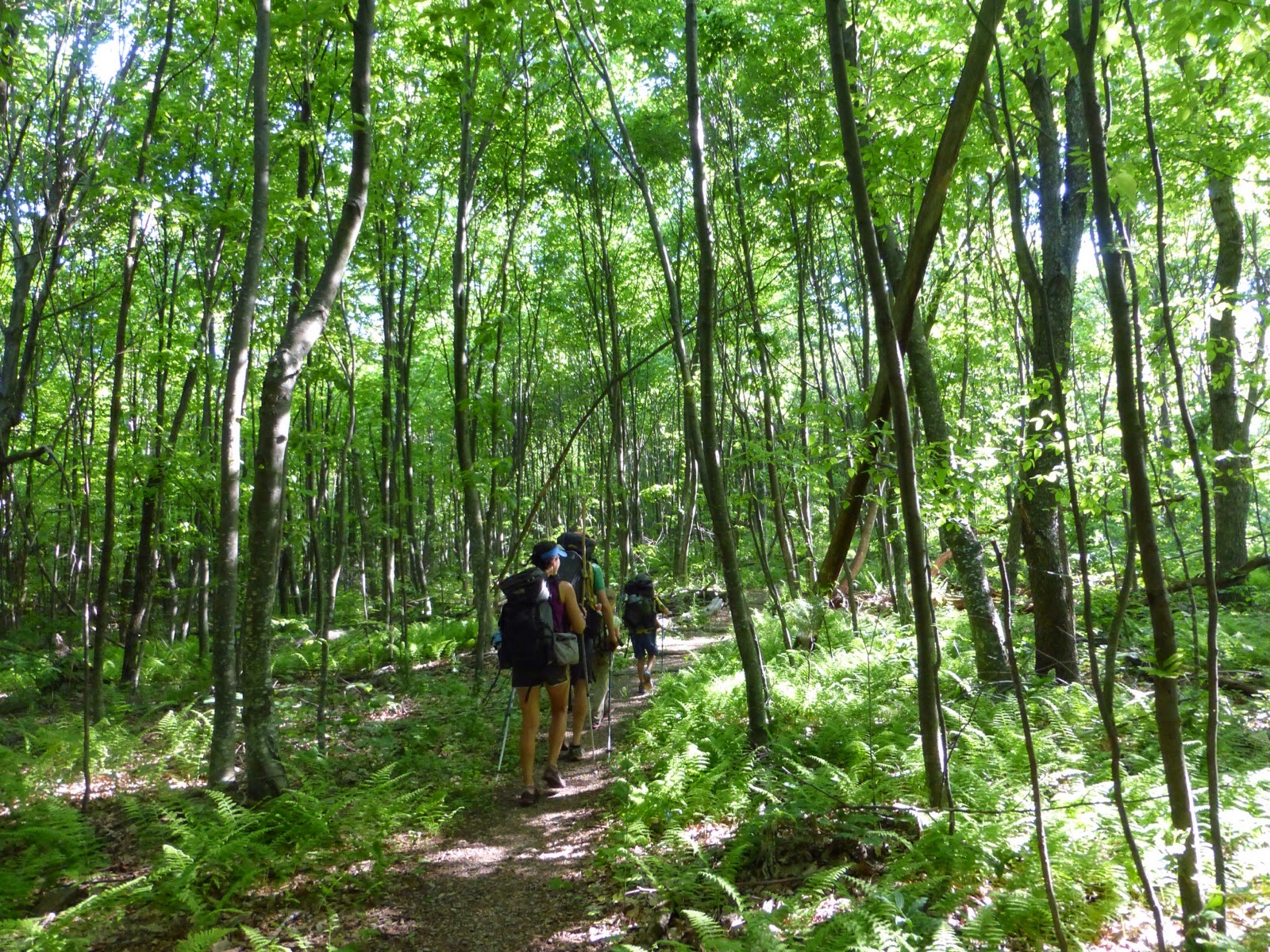 Shenandoah has been great trail and we heard it would be. I feel so spoiled as it’s mostly gradual elevation changes with smooth trail and easy cruising. If I wasn’t on a preplanned schedule to meet people in the next two towns, I’d have bigger mile days, but this has been a good change of pace for me and I’ve enjoyed the variety and temporary change from my regular solo days. We’ve gotten completely spoiled in Shenandoah and I wish all thru hiking was this easy! We go by places that sell food each day and are able to get water without having to filter it! There was another wayside 7mi into the day this morning and I don’t think any of us were particularly hungry, but once we got there we all wanted all that they had! We all got their amazing egg sandwiches made fresh on the grill, chocolate milk, and cookies. The Kallins each got ice cream too! We were indulging. You’d think we were starving the way we ate. 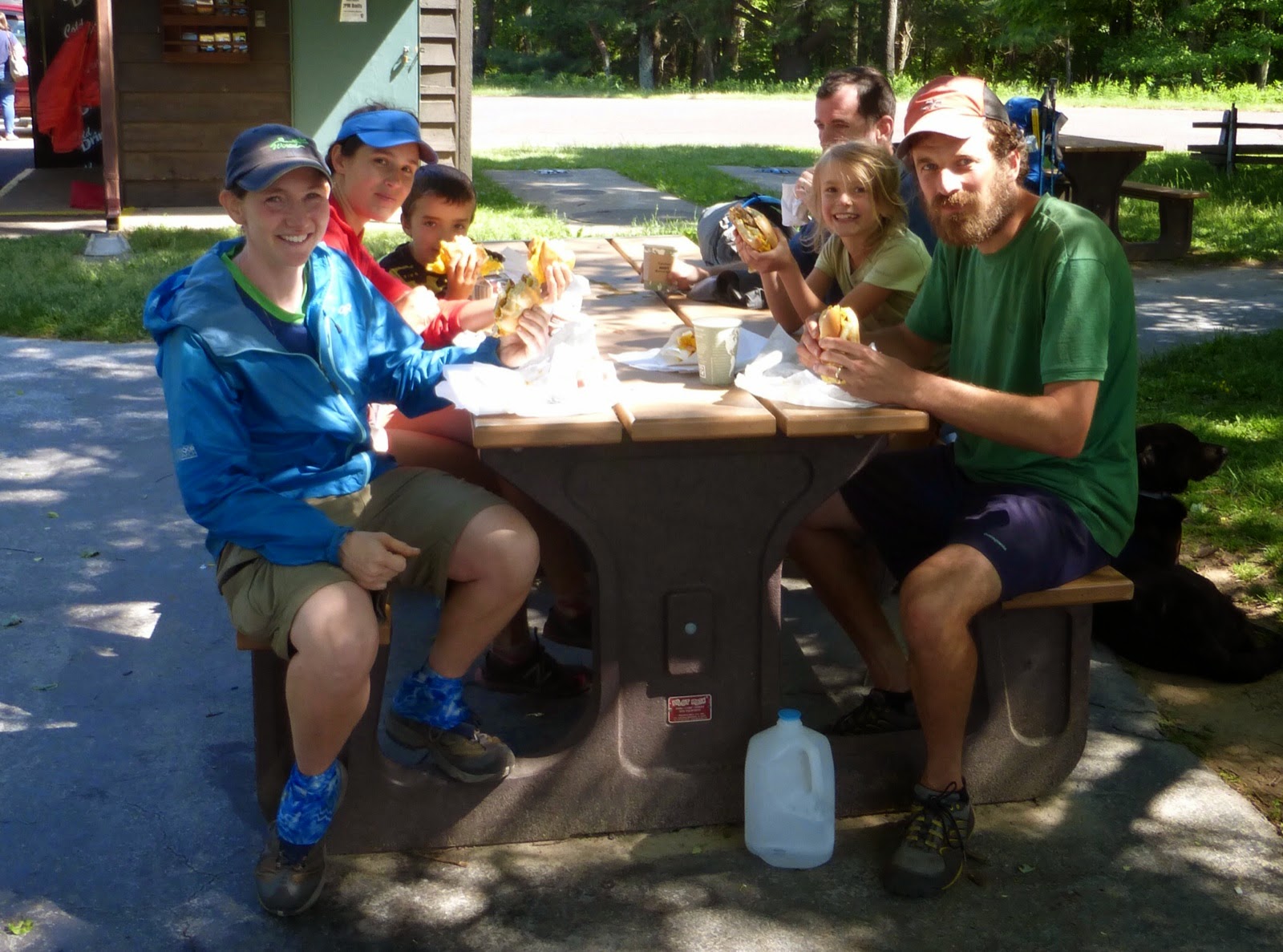 While we were there, the other men who have been hiking around us came through or were just leaving/arriving and it’s the first time I’ve been in a bit of a group seeing the same people over the days of a leg. Kickapoo and Jet Cat got an early start and plan to push ahead with bigger miles today. We ate with a hiker named Marty that we met in the morning and saw multiple times today. It was the best egg sandwich any of us had ever had. 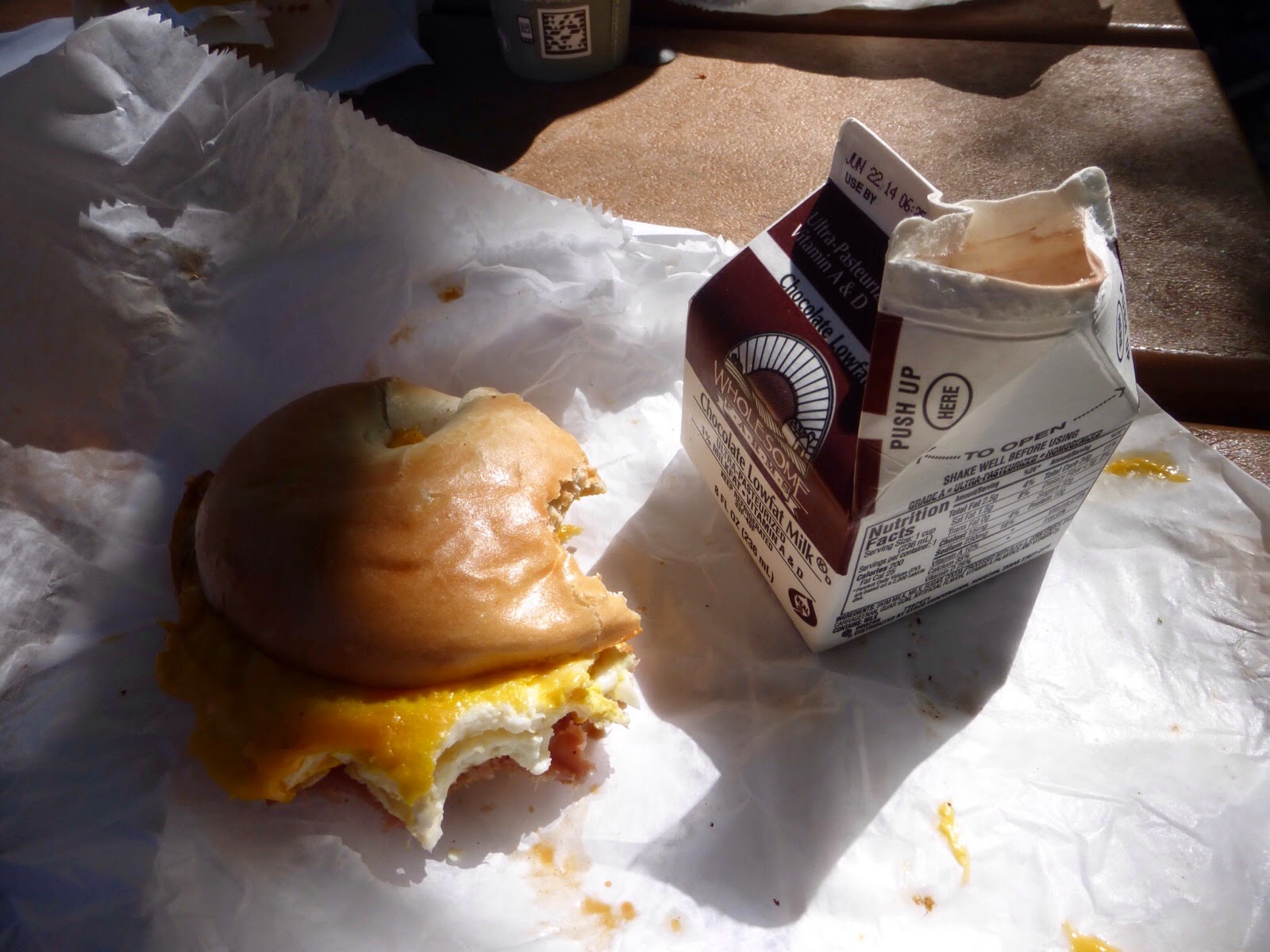 It filled us for the day and all we had to do was snack after that. With the morning stop and the early side trip for the meal, our morning miles were very low and us adults worried about making our intended goal. As the day went on, we were shocked how the miles just flew by because the kids were needing more breaks and were distracted by frequent viewpoints which were all the same view. They love climbing on the rocks at each outcropping and there were plenty of those today. 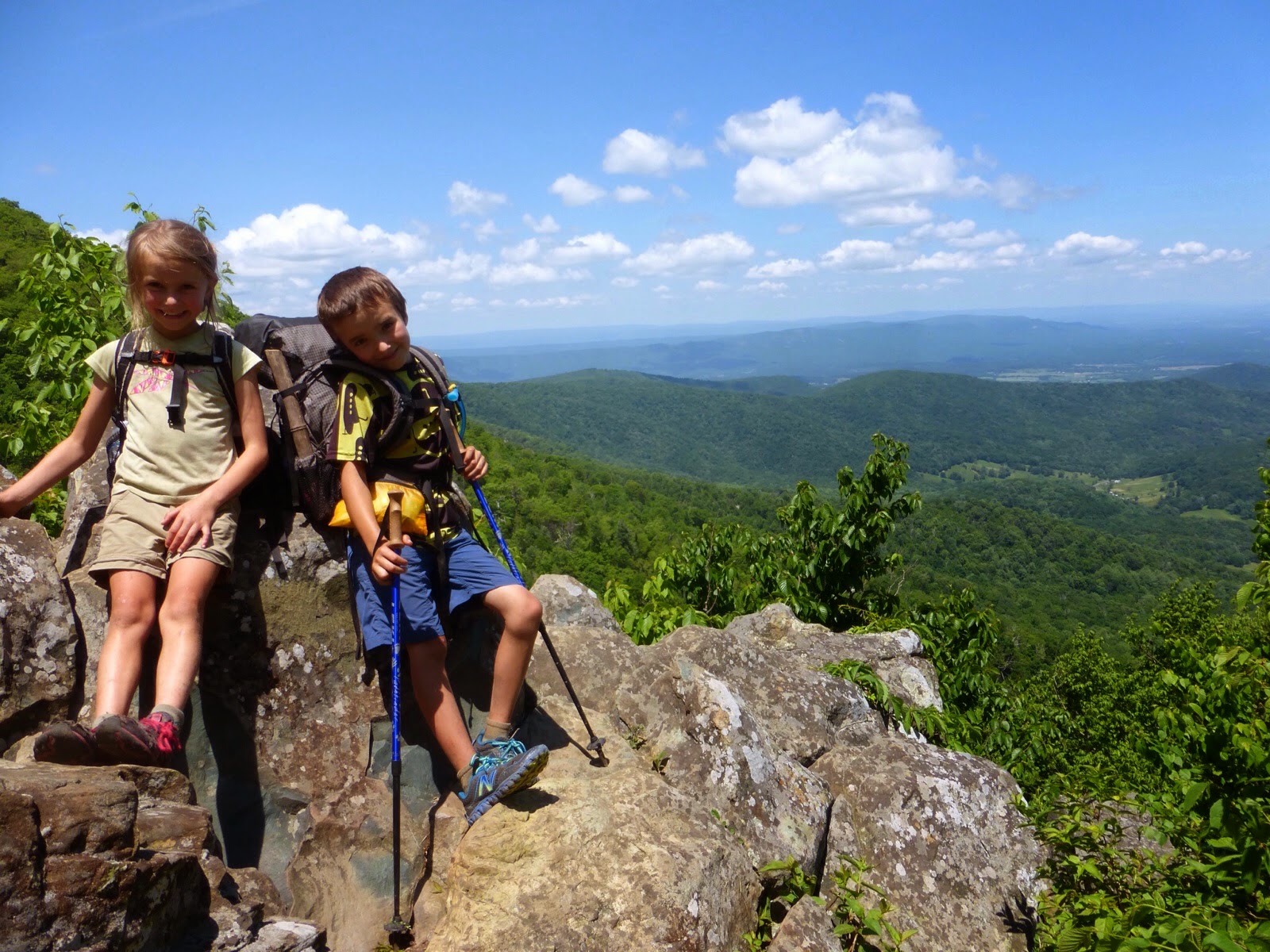 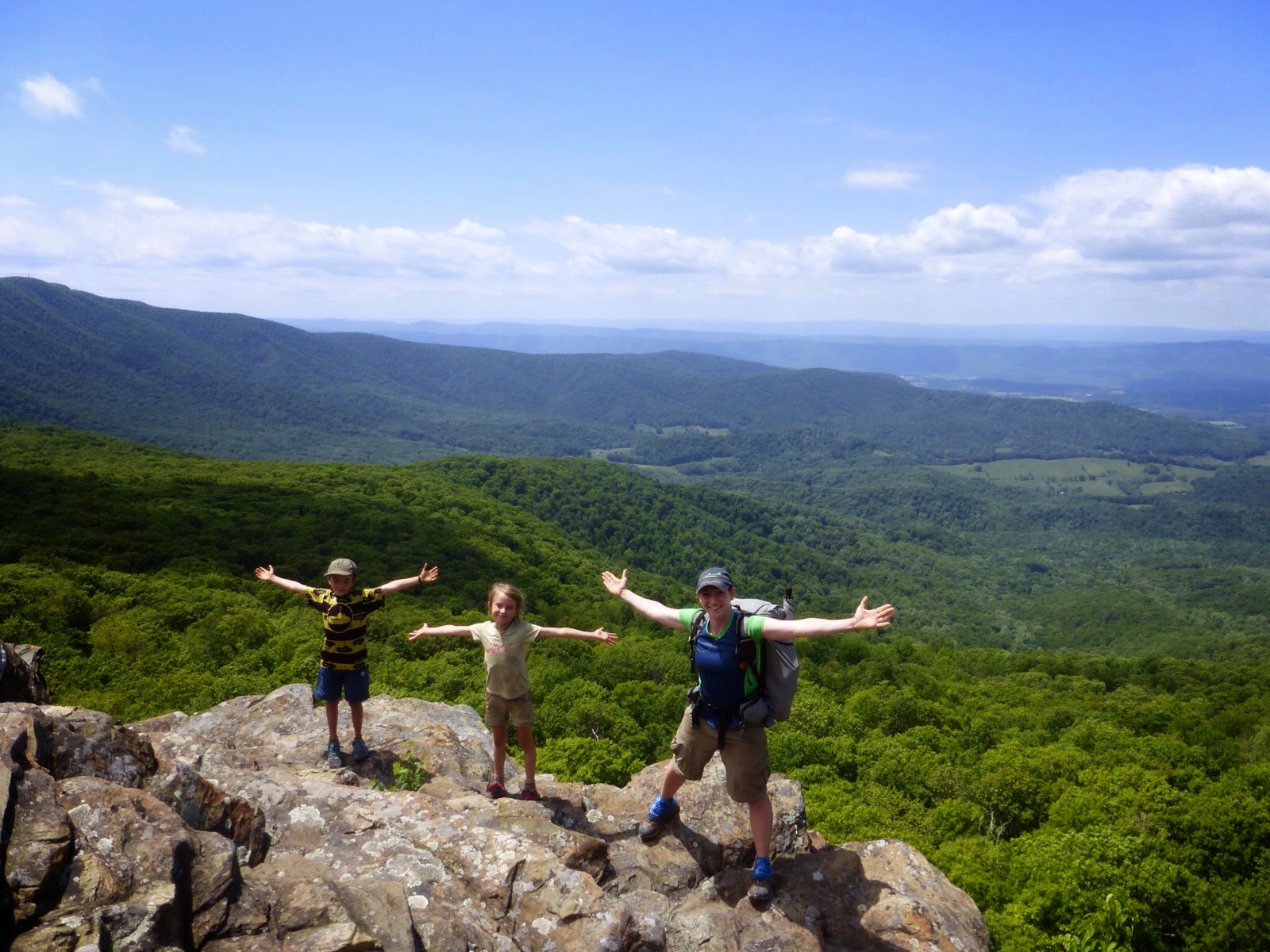 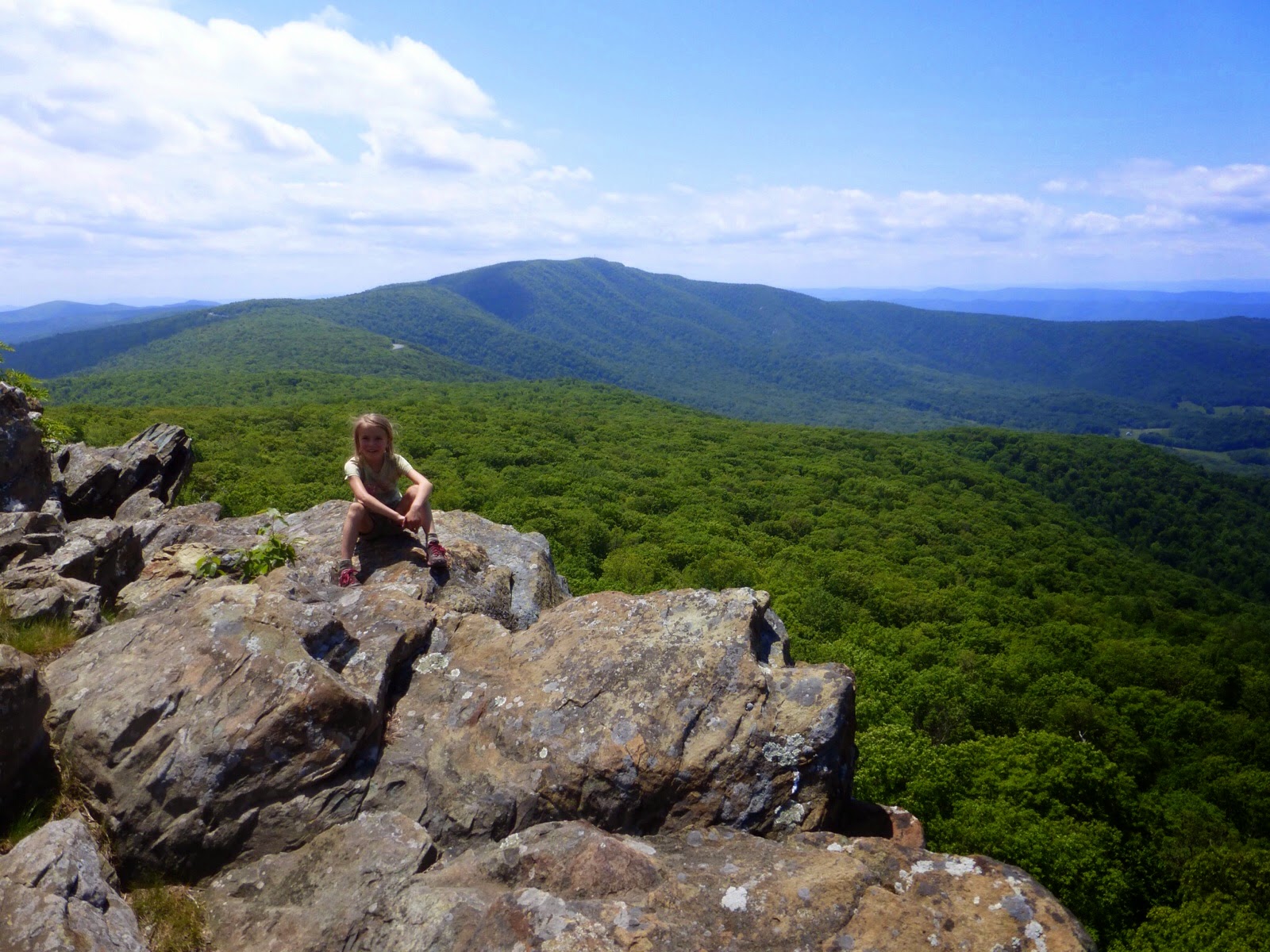 With the repeated stops, we worried about timing. There were also lots of weekenders and trains of people coming towards us so we’d need to step off the narrow trail to let them pass if they were going uphill as the uphill hikers have the right of way. Then there was someone at a parking lot (in Shenandoah the trail crosses countless roads and parking lots) that had met the Kallins early in their hike and we stopped again as they chatted. Even with all these stops, we somehow made it to camp having done 23.8mi by 6pm! Just unbelievable. I just had to take a picture of Robin Hood with one of the clumps of grass uprooted by trail maintenance. 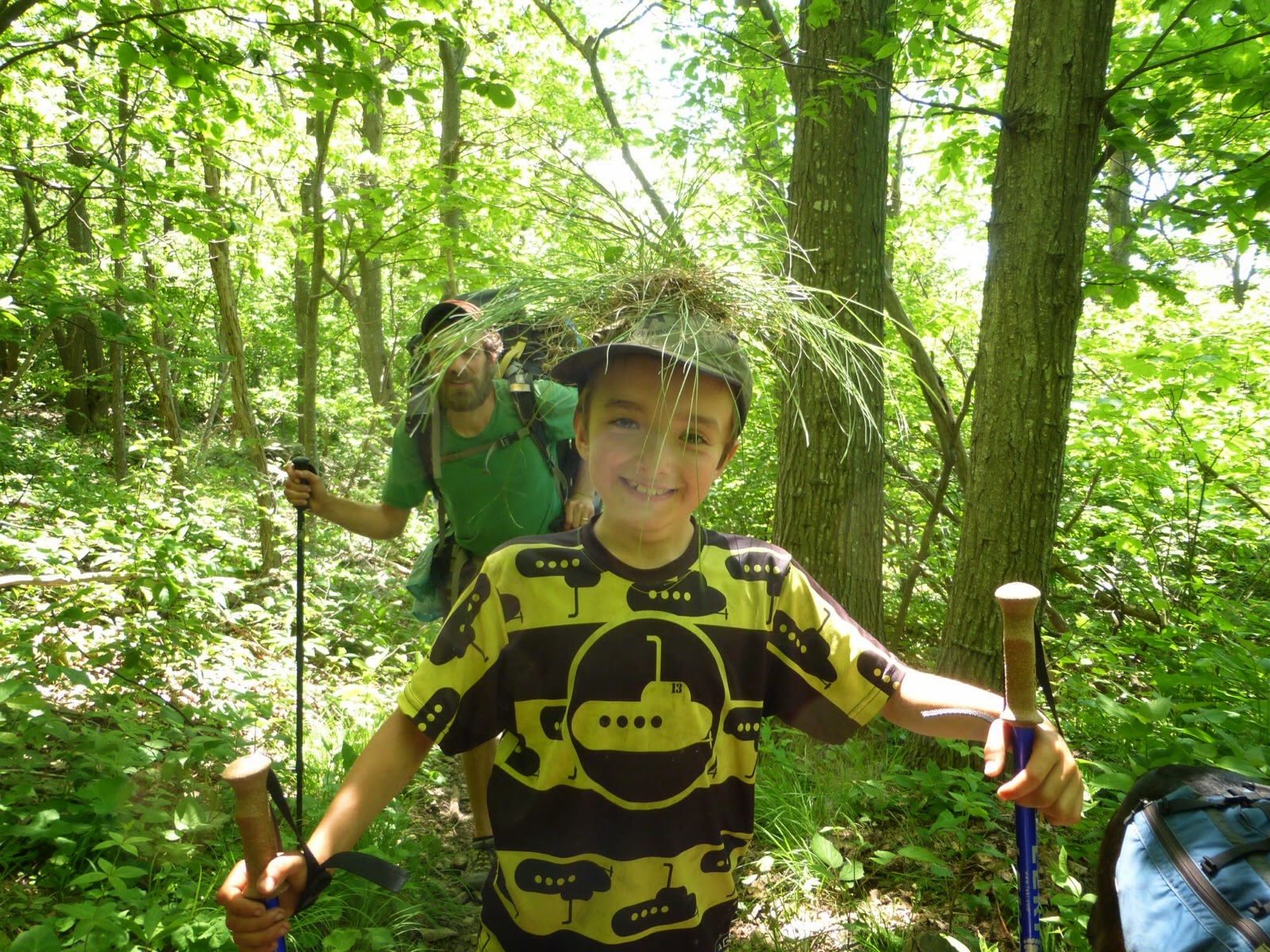 Just when we thought the kids were getting tired, they’d get a burst of energy. At the end of the day, Robin Hood was still trying to climb on all the rock boulders he could. Here’s just one example. He loves the climbing! 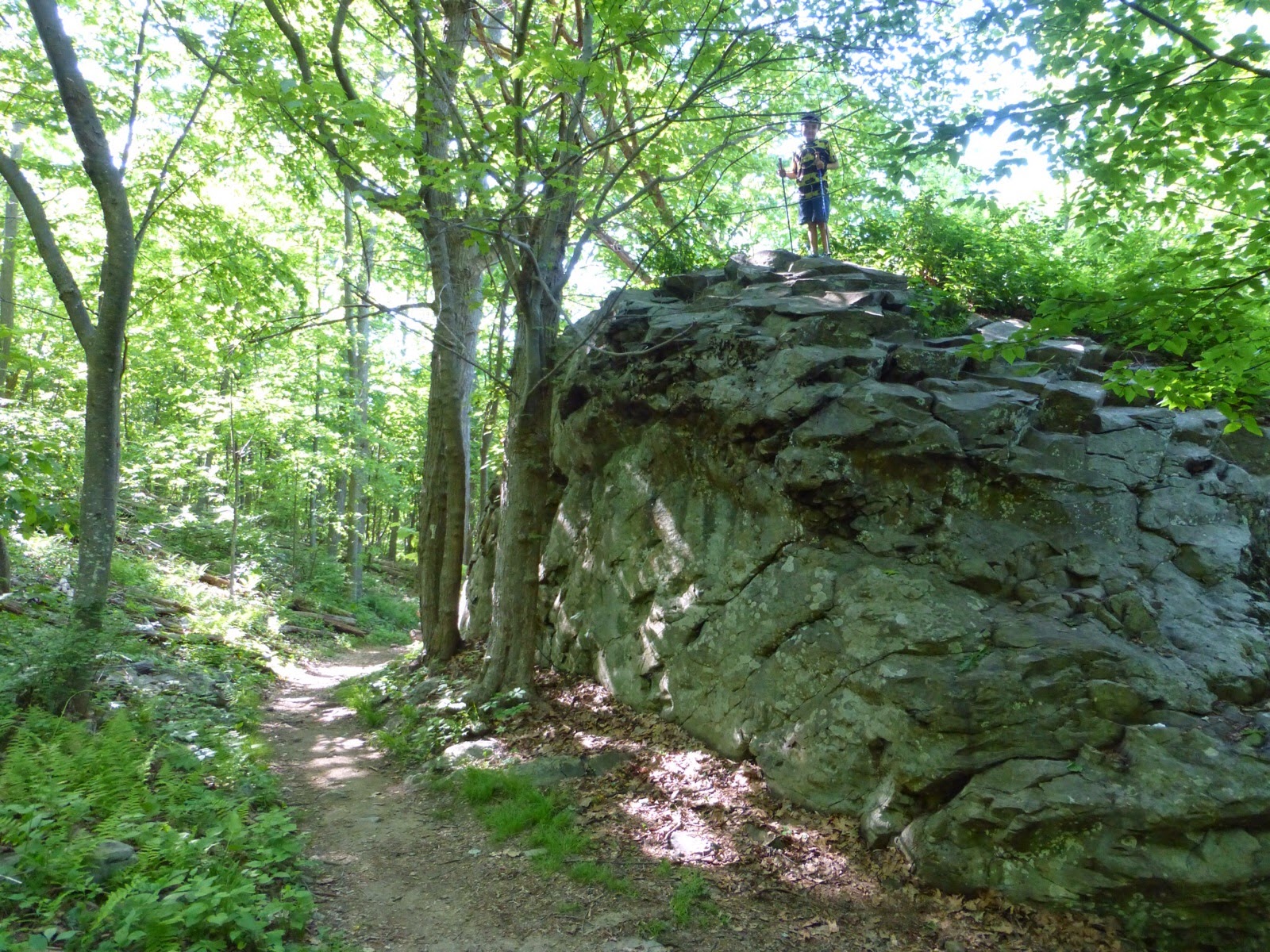 We had many exciting animal sightings today too. Robin Hood spotted a rattlesnake, which is my first of this trail! 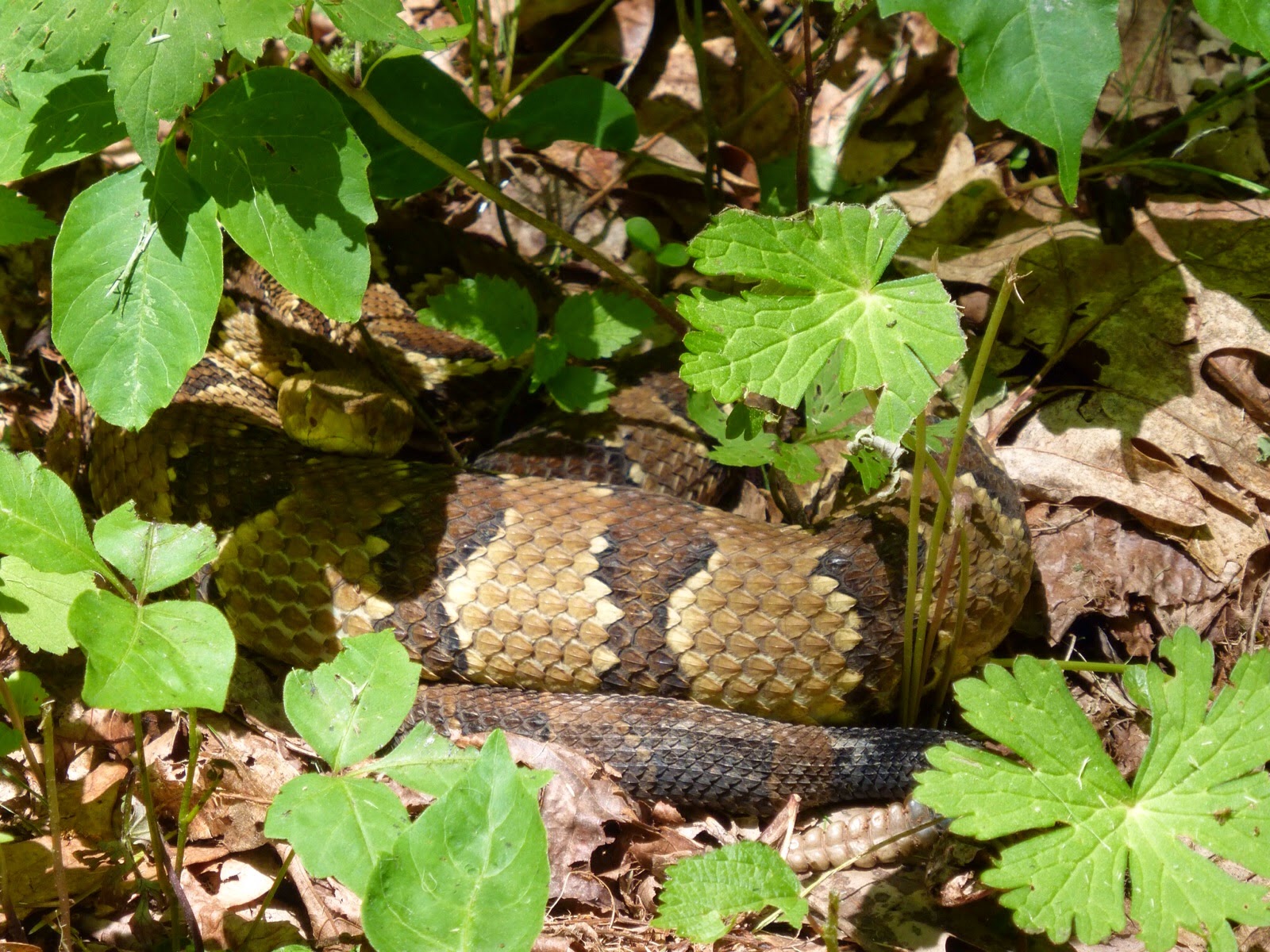 There was also a protected area we walked by for peregrine falcons and one was perched perfectly for us to see. 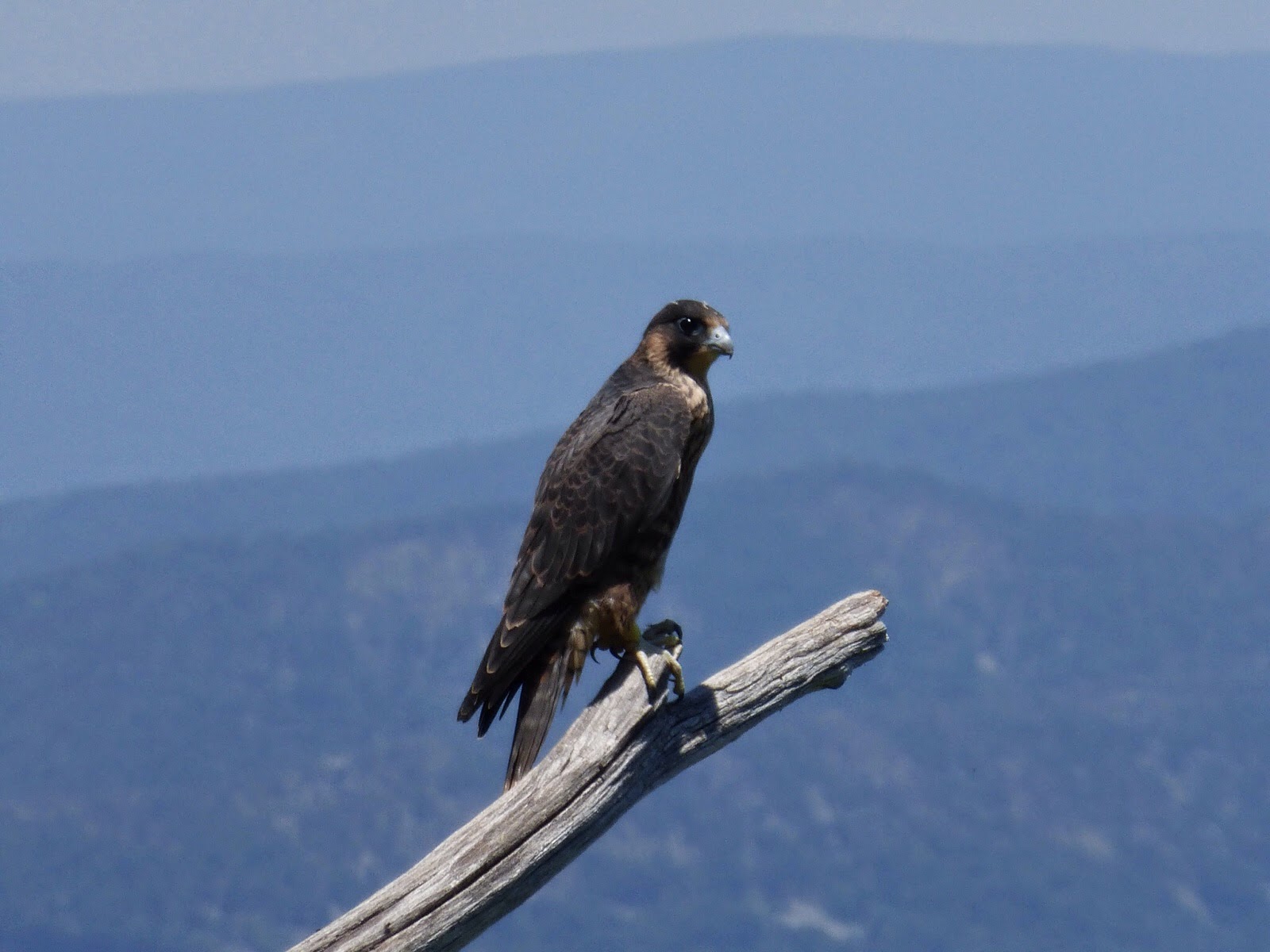 I forgot to mention that the ticks were horrible at our campsite last night in the grass. I’ve been fortunate, but the Kallins are magnets for them. All In had set up all their site and was picking them off all during dinner last night. They left their packs outside their tent and the kids were in the hammocks, so they were picking them off all morning. It was ridiculous. Most were the big ones that don’t carry Lyme and few actually bit. Poor Cartwheel won the award as she just picked them off all day. She was like a magnet as I walked behind her and they’d just appear on her out of nowhere. She is hilarious and just grabs them and pinches them as if it’s a fly or something. We seriously should have counted, but it had to be around 30 or more for her all over in different places. Just crazy! I think the rest of them had a handful or more. We think they got in the packs and just kept crawling out on them. I did treat my clothes professionally through Insect Shield with permethrin and that seems to be working. Here is the form to send in if you can’t find it on their site. They did the spray at home that may not be as effective and plan to spray their clothes again ASAP. They all took it in stride though.

The final big sighting of the day was a bear! The dog Orion bolted into the woods at the end of the day out of nowhere and we saw a medium sided bear shoot up a tree. They called for Orion to return and the bear zoomed down the tree even faster than it went up and ran off. We all got a shot of adrenaline seeing that happen in less than 5 seconds and I couldn’t even get the camera on before it was all over! What a goodbye day to the Shenandoahs! The final campsite for this leg is near a shelter that had a nice porch on it and the campsites were very far off trail with fire pits. We ate dinner together and I’m at the neighboring site. We also got to Skype with my nephews before we turned in for the night and that was fun. Ah, good times! 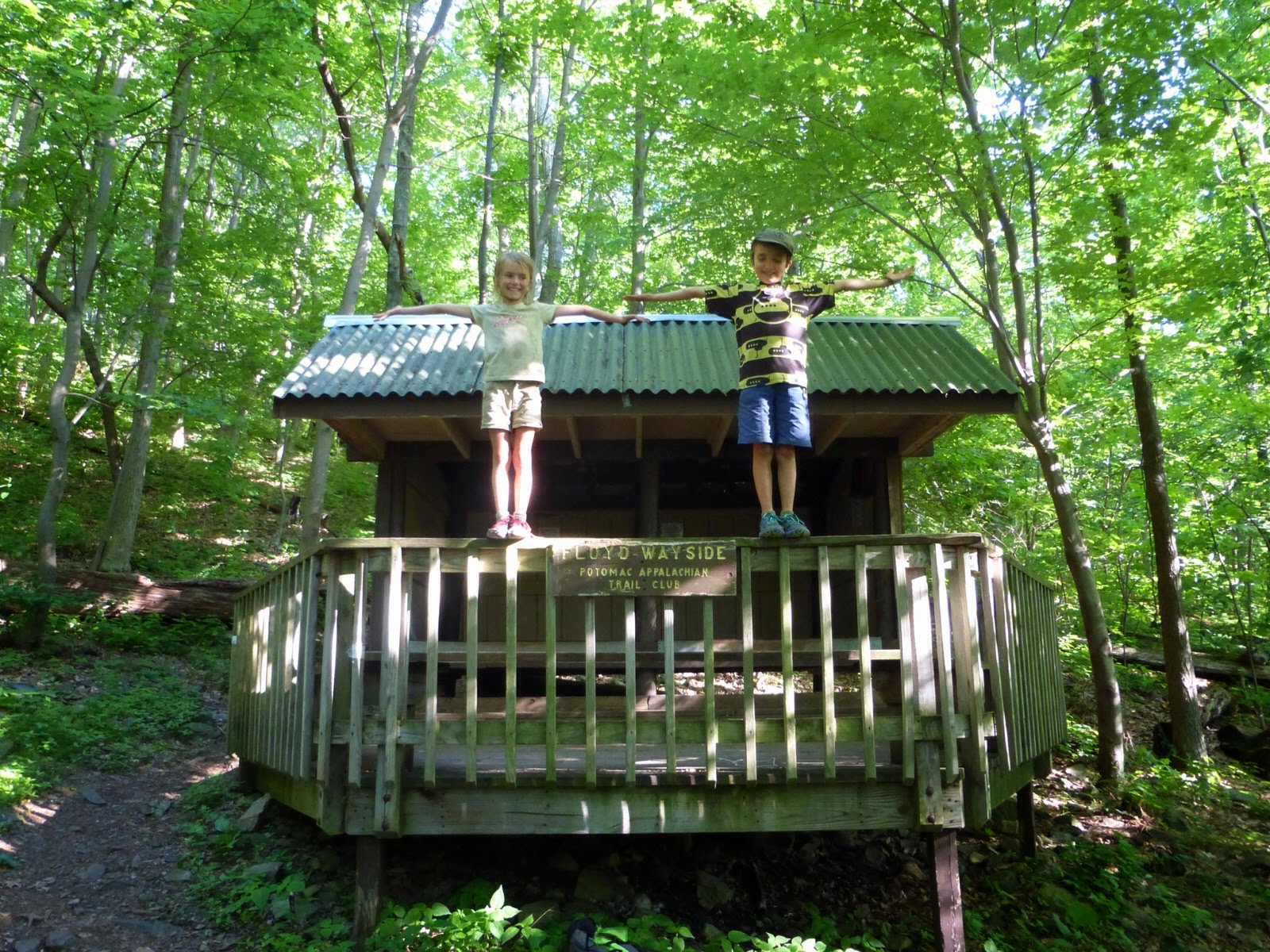 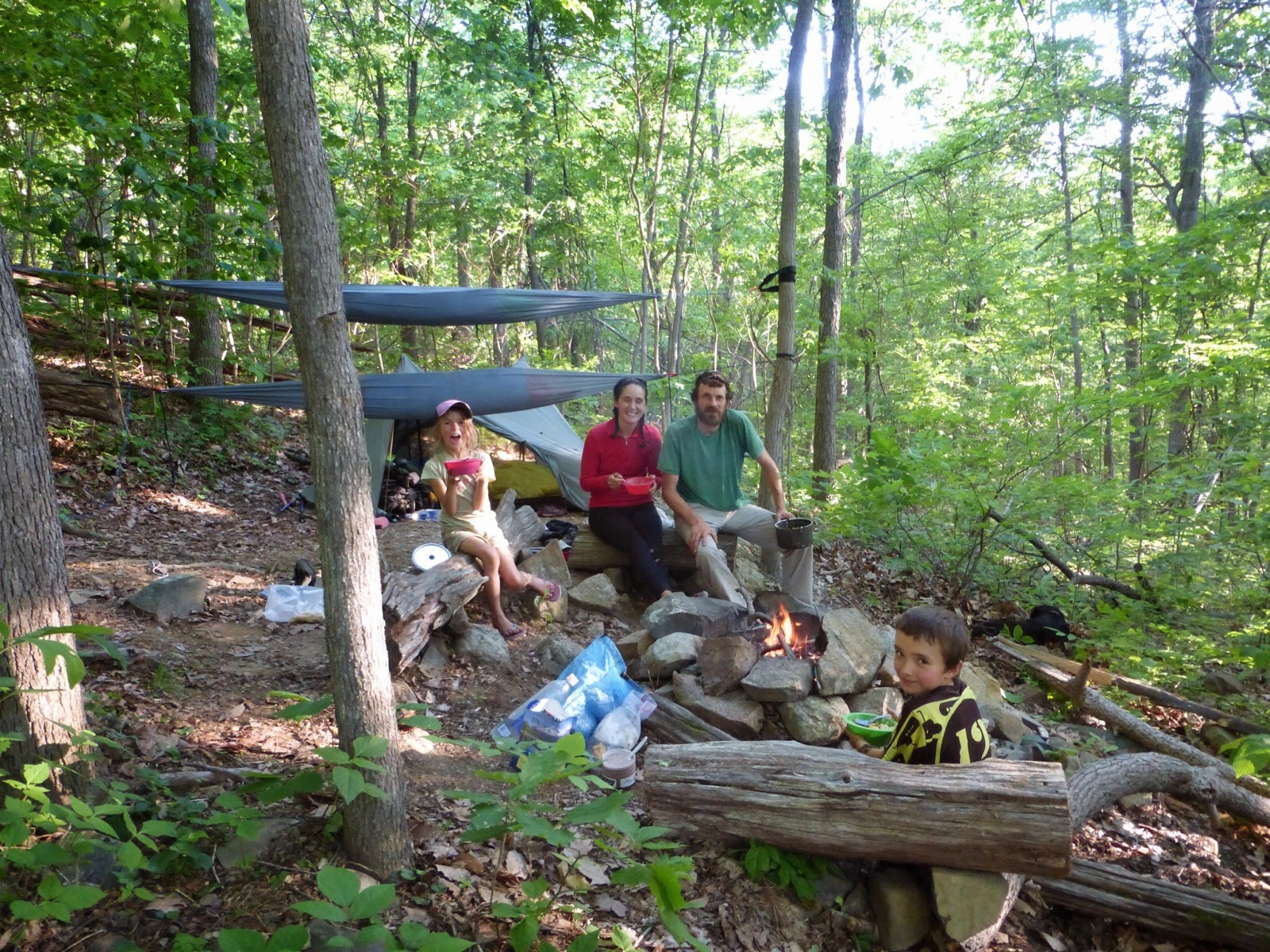 We are 3mi from town and have a shuttle scheduled to take us into the town of Front Royal tomorrow where we will all stay the night at the same hotel.