Day 55: Adjusting To A New Normal

It rained off and on through the night, but stopped by the morning. I’m getting real lucky that it’s been raining when I’m in my tent. I find it to be relaxing though. It’s actually raining lightly as I blog right now and it always makes me more drowsy. I woke up at the 5:15am bird call and laid there until 6:15am as I needed to wait because I was headed to Pine Grove Furnace State Park, the home of the AT Museum and a general store where hikers take part in the half gallon ice cream challenge to celebrate the halfway mark on the trail. Both didn’t open til 9am, so I waited and hiked up just as it was opening. Many of the other hikers I saw last night were also there. I didn’t partake in the challenge, but some of them did so I couldn’t resist the photo of them with their half gallons and me with my little cup of chocolate ice cream. Hey, I also ate a full sleeve of powdered donuts! Didn’t see that one coming til I saw them in the store. Hit the spot! Here I am with Indie, Atlas, and Sunshine. 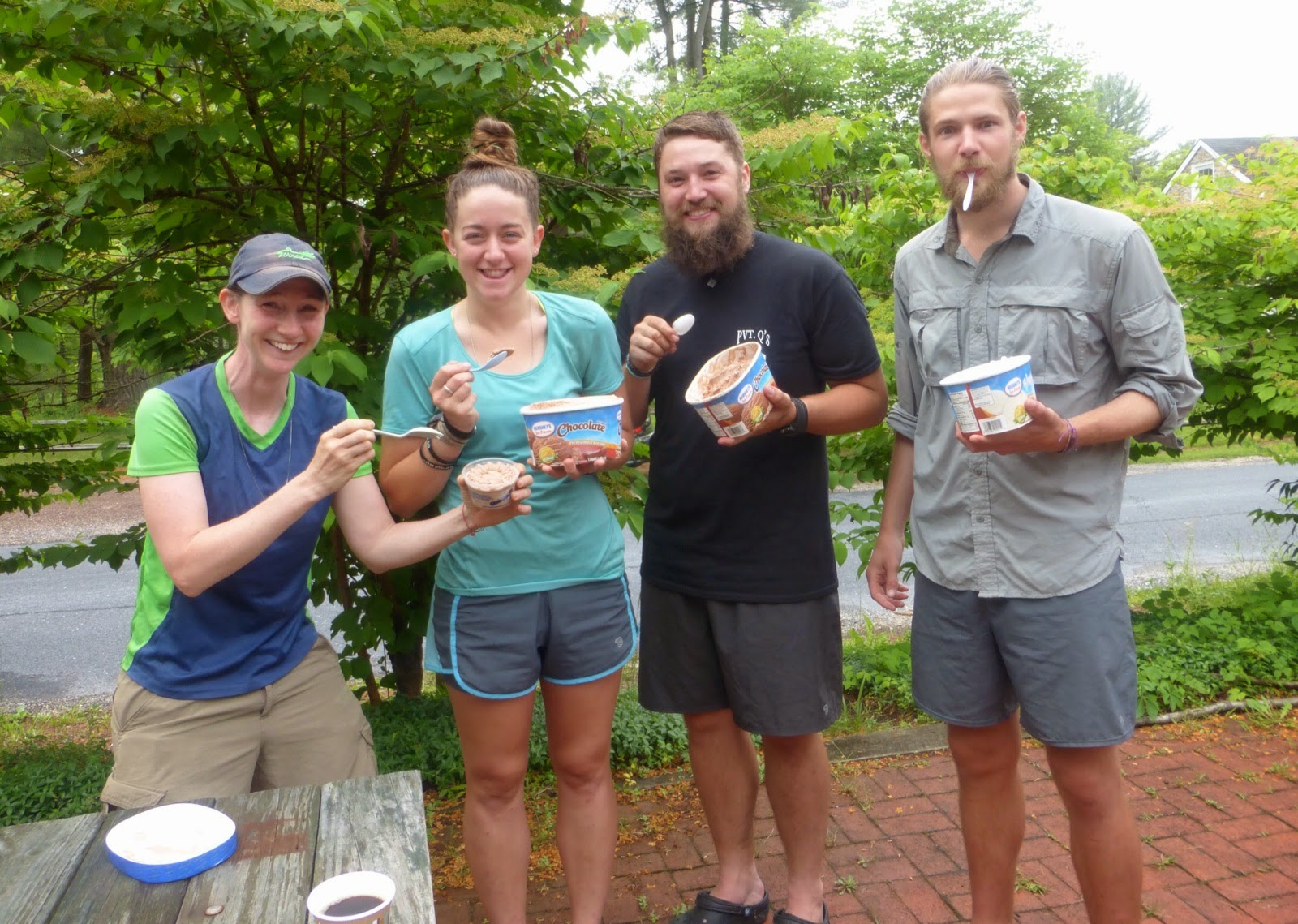 I didn’t stay long enough to see how the challenge went, but they were doing well yet fading fast. I had a feeling it would be awhile. I then went over to the AT Museum which is fairly small yet quaint. It was great to be able to read about the history and people of the trail. 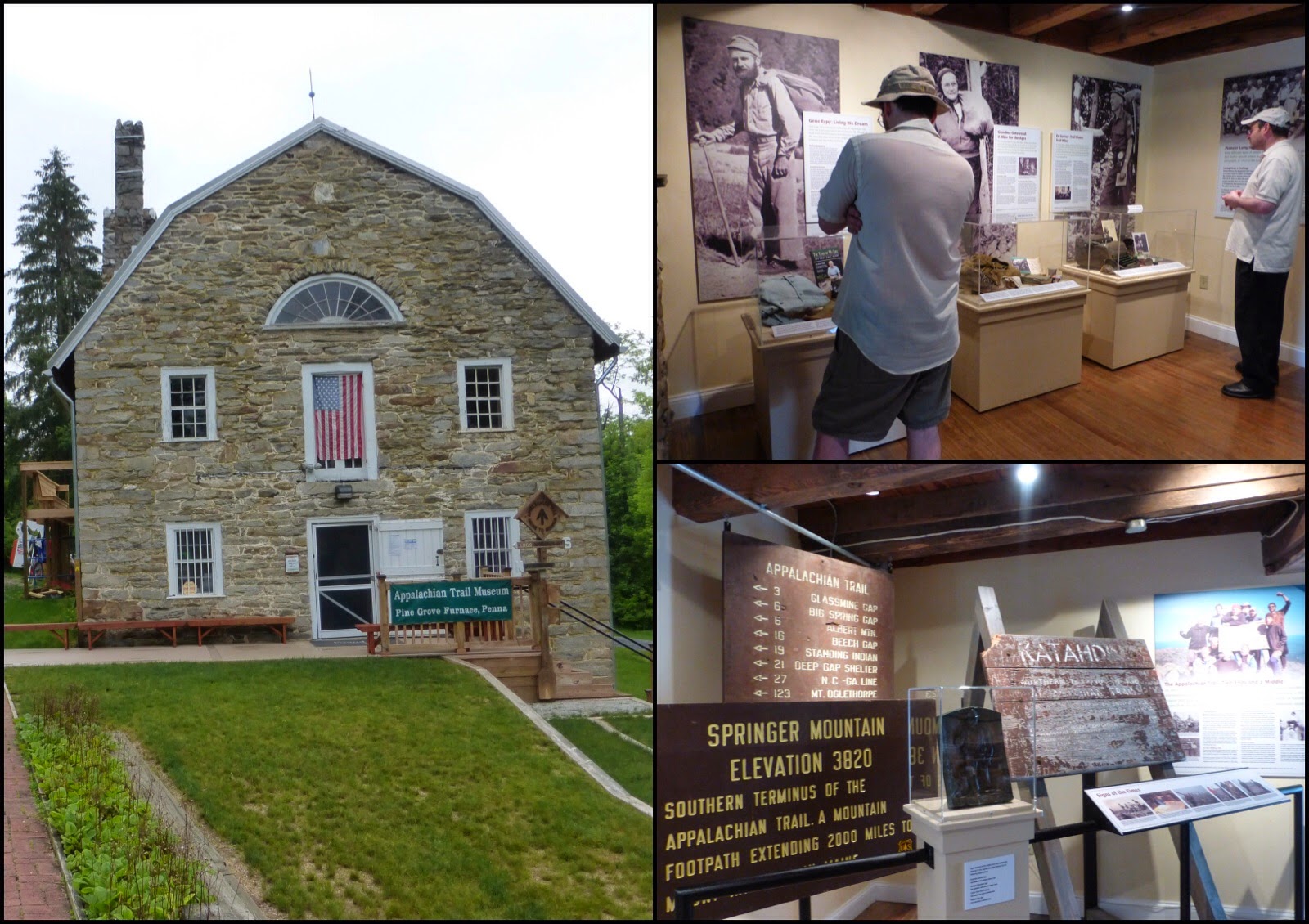 By the time I hiked off, it was a couple hours from lunch, so I aimed for a later lunch than usual so I could get a good rhythm going. I was more energized than yesterday, but I can still feel the effect that the humidity has on my energy level. It’s just been more draining. It’s uncomfortable to always be soaked in my own sweat and to have it running down my face and dripping off me. Today I couldn’t even get my phone to work because too much sweat fell on the screen and the touch screen couldn’t register my my sweaty fingers. I attempted to wipe the screen and I had difficulty finding a piece of my clothing dry enough to wipe it dry. Good thing it’s in a waterproof case! A lot of hiking is a mental game and the discomfort of the humidity, and eventually the heat too, is something I need to find a way to mentally deal with. It’s only just begun and I can’t change it, but I’ve found that I’m letting it affect me. Towards the end of the day, I was once again feeling lethargic when I thought I shouldn’t be. Then I realized that I needed to shift my thoughts and expectations. I can’t expect the same energy and results from myself in heat and humidity as I did on all those crisp cooler days I’ve had so far. I kept telling myself that today, and now maybe if I write it out I’ll actually accept it. The honeymoon is over, but it was a nice long honeymoon! 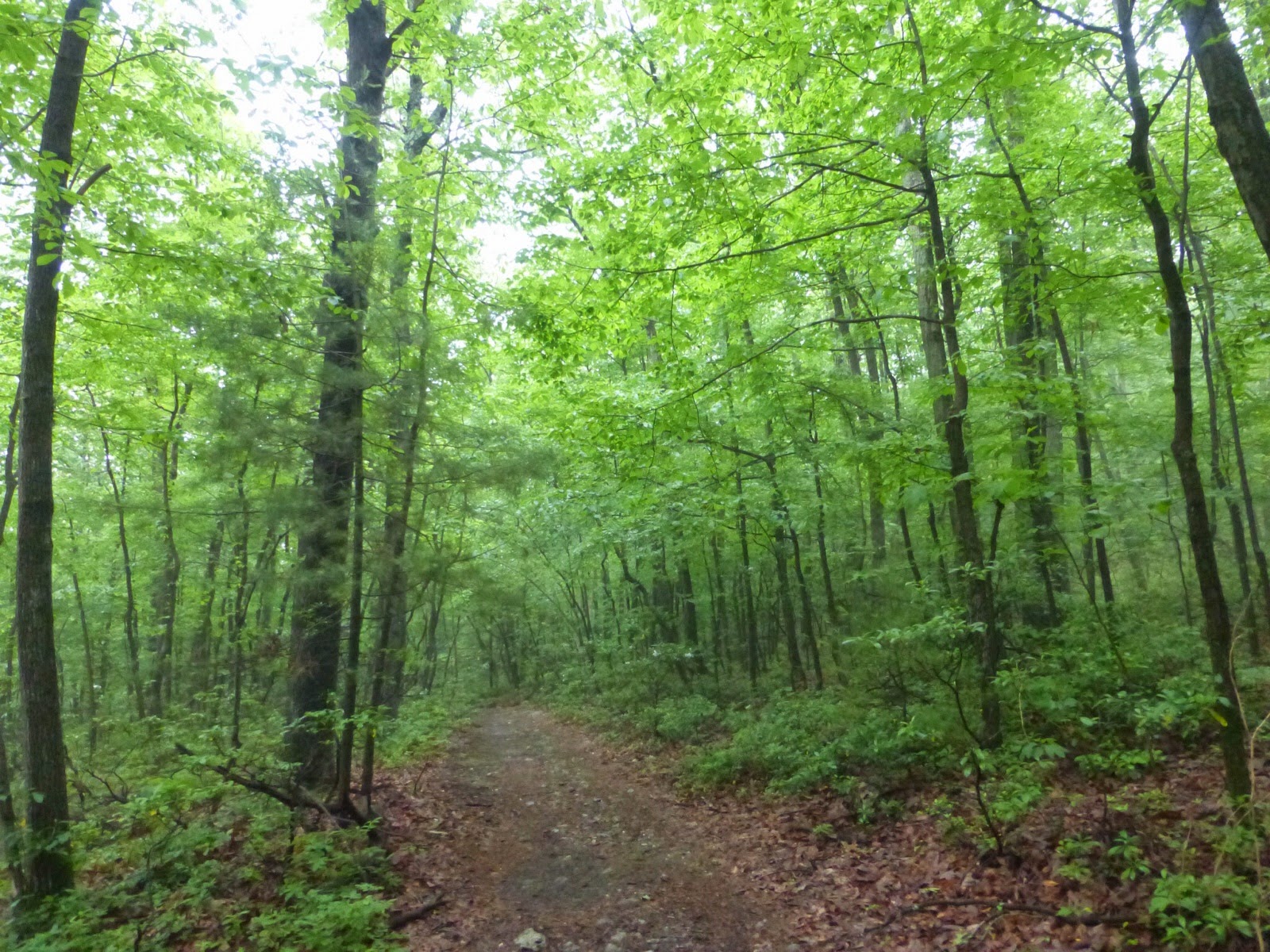 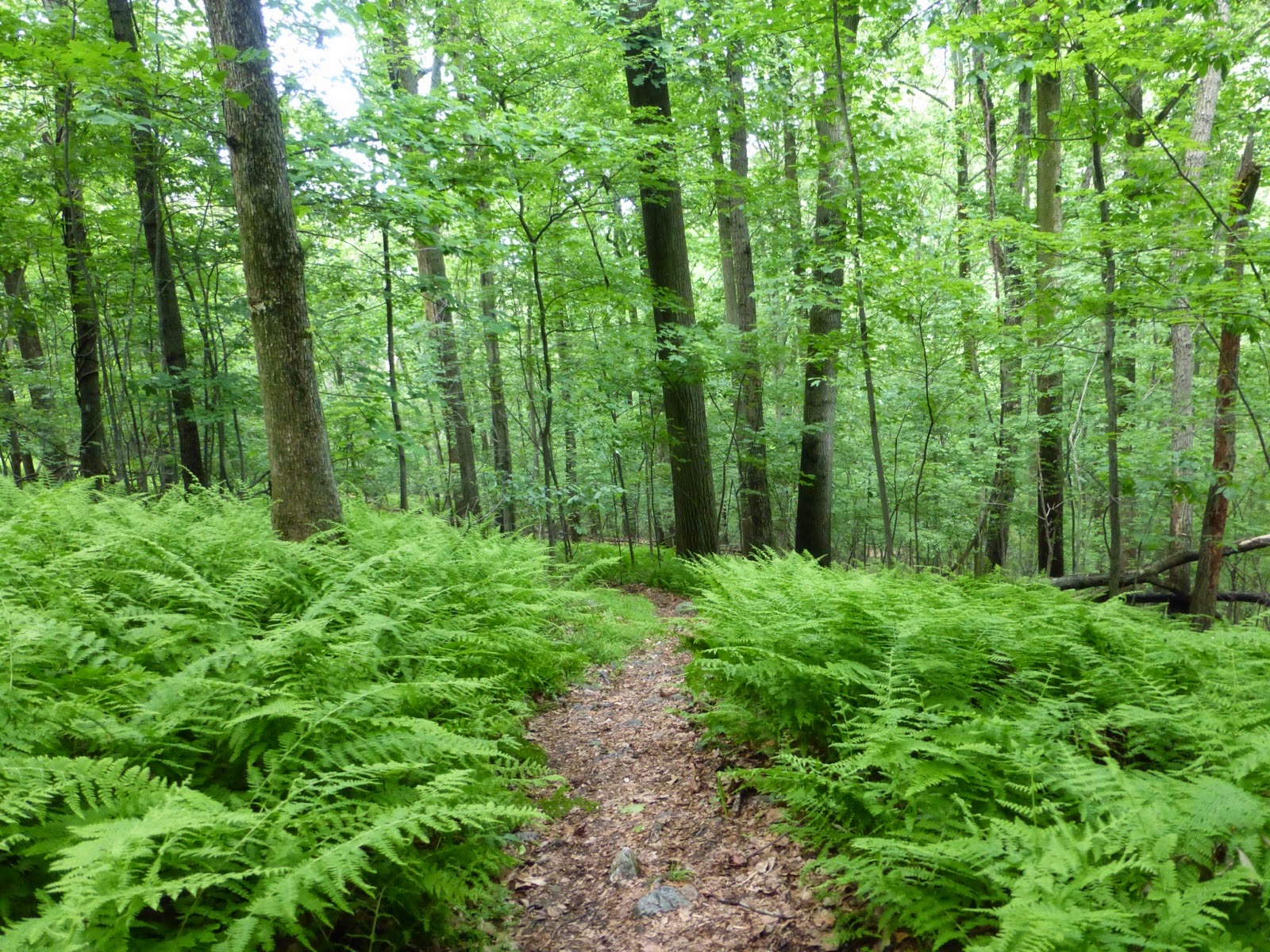 To add to the enjoyment today, there wasn’t a single view, ha! There was a preview of some of the rocks I am going to be encountering very soon. I have new shoes waiting for me in town tomorrow and I’m glad for that. My tread is pretty well worn and I was slipping on the wet rocks and moving very cautiously. Slow going. 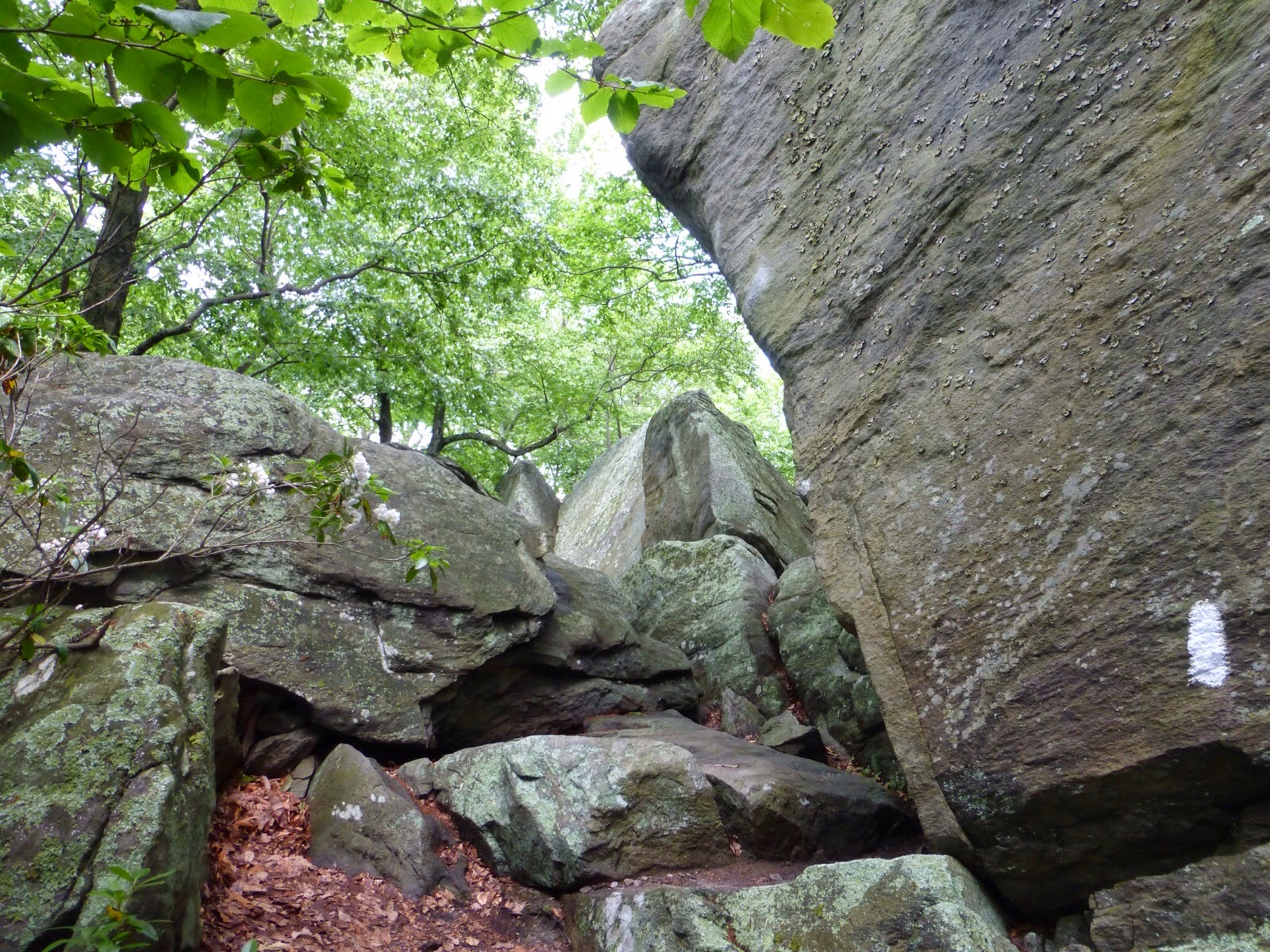 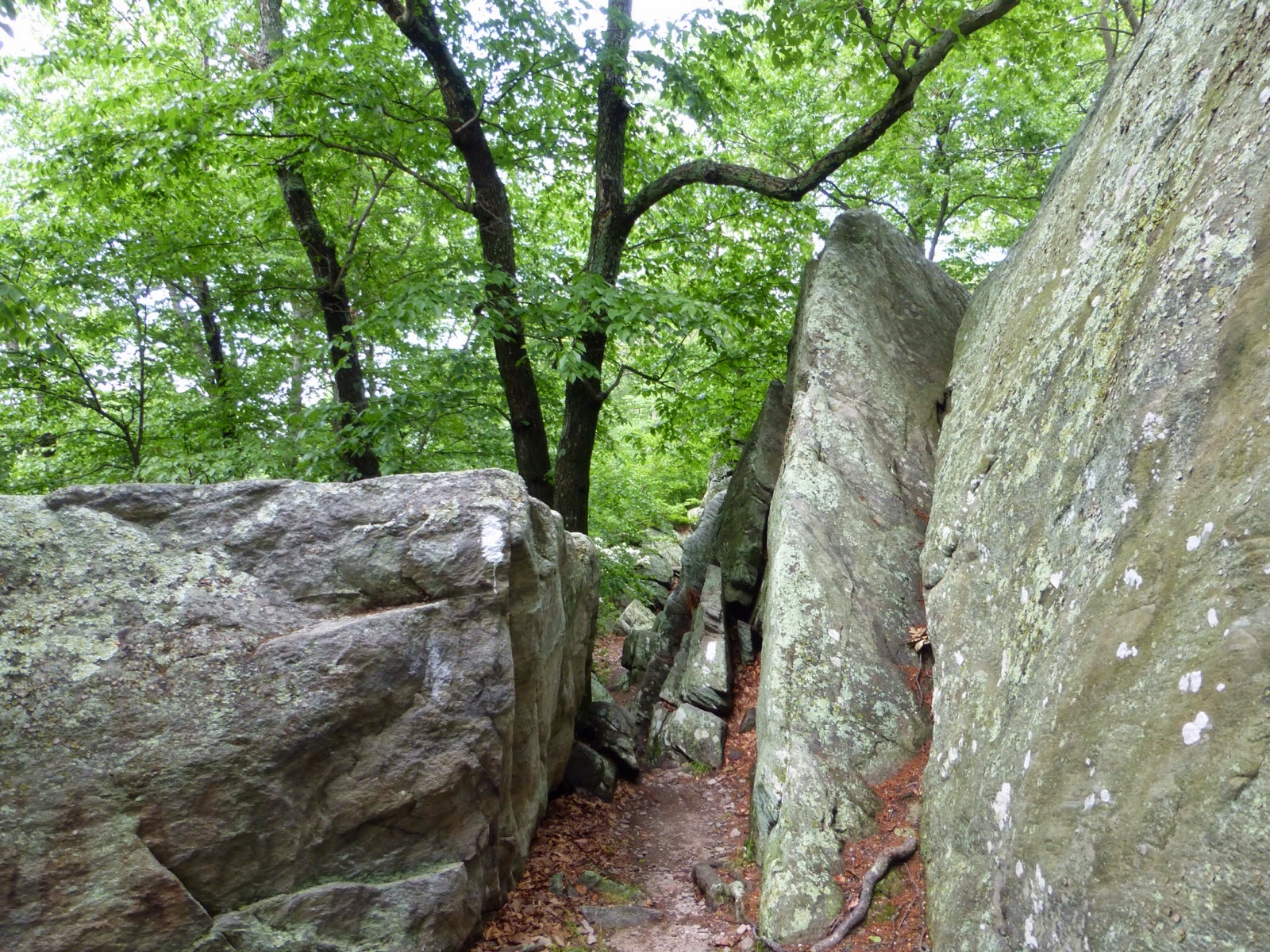 The day ended with a couple miles through pasture as the trial headed into Boiling Springs, PA and it was hot. I proudly used my umbrella and attempted a delayed photo on my camera and accidentally got this cool one! 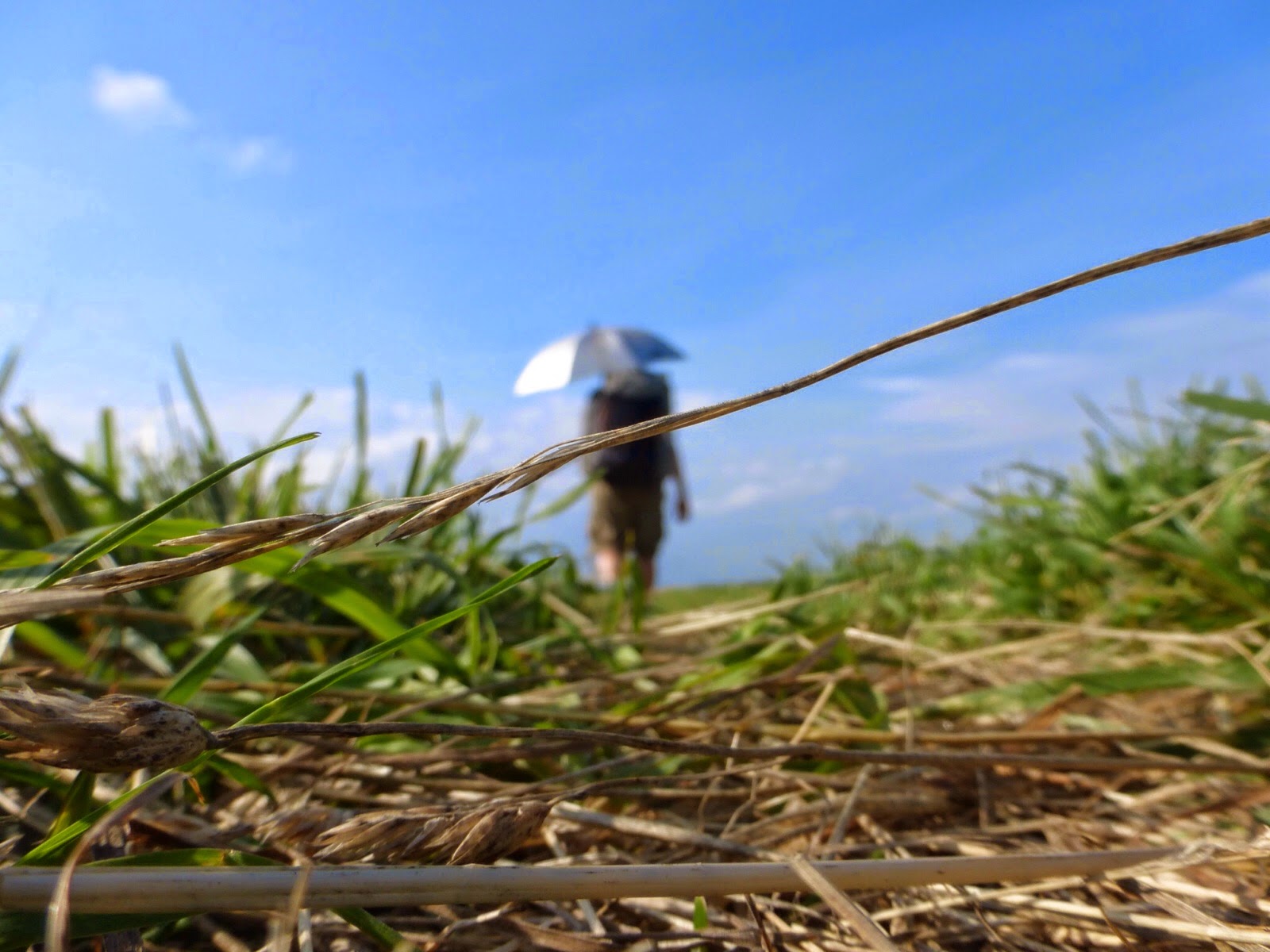 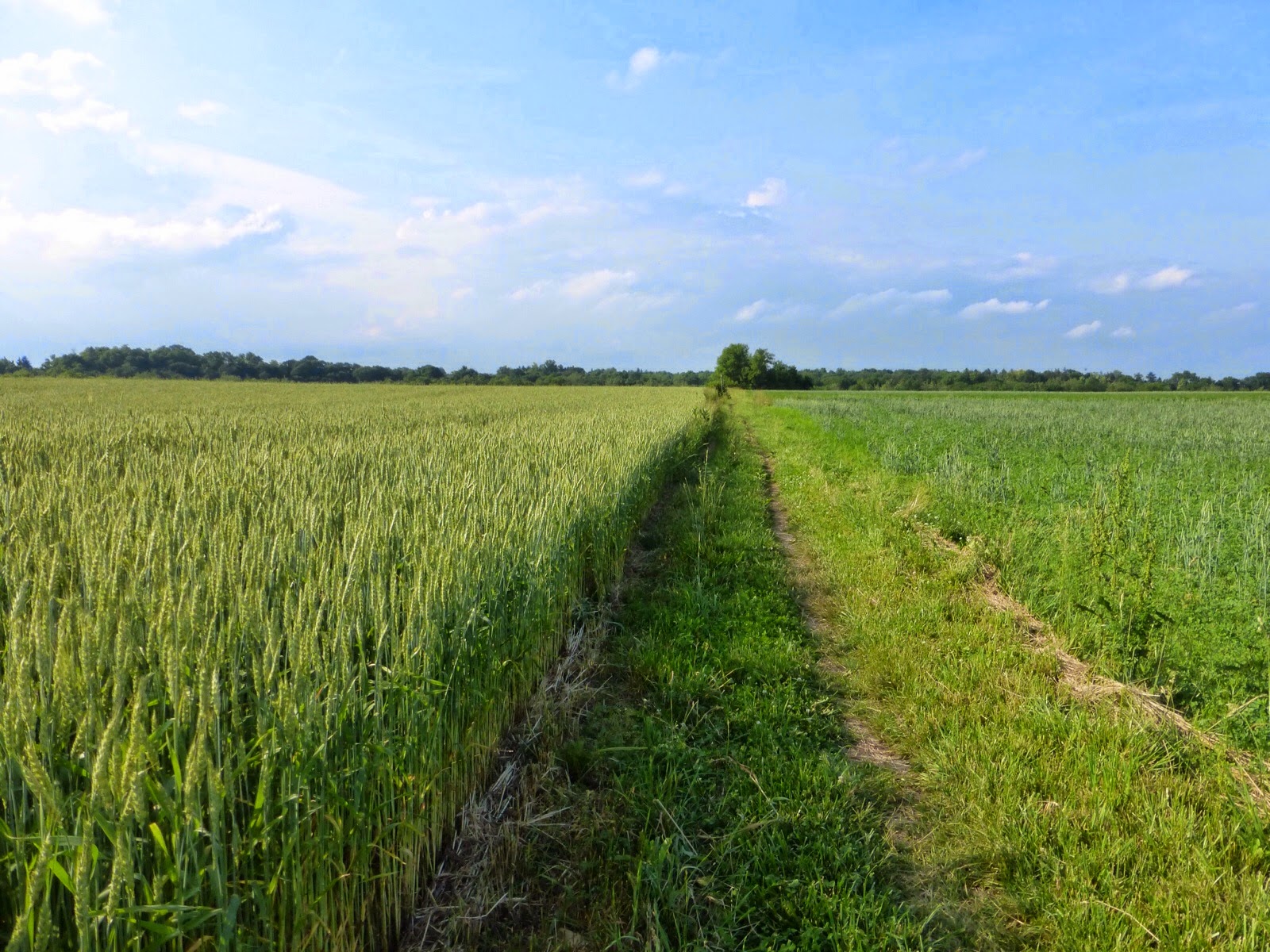 This is the beginning of a 14mi section of pasture and farmland where camping is not allowed. Just before town, there is a backpacker’s campground and I’m here with about 6 other guys thru hiking. The campground is more of a patch of grass surrounded by trees next to farmland. 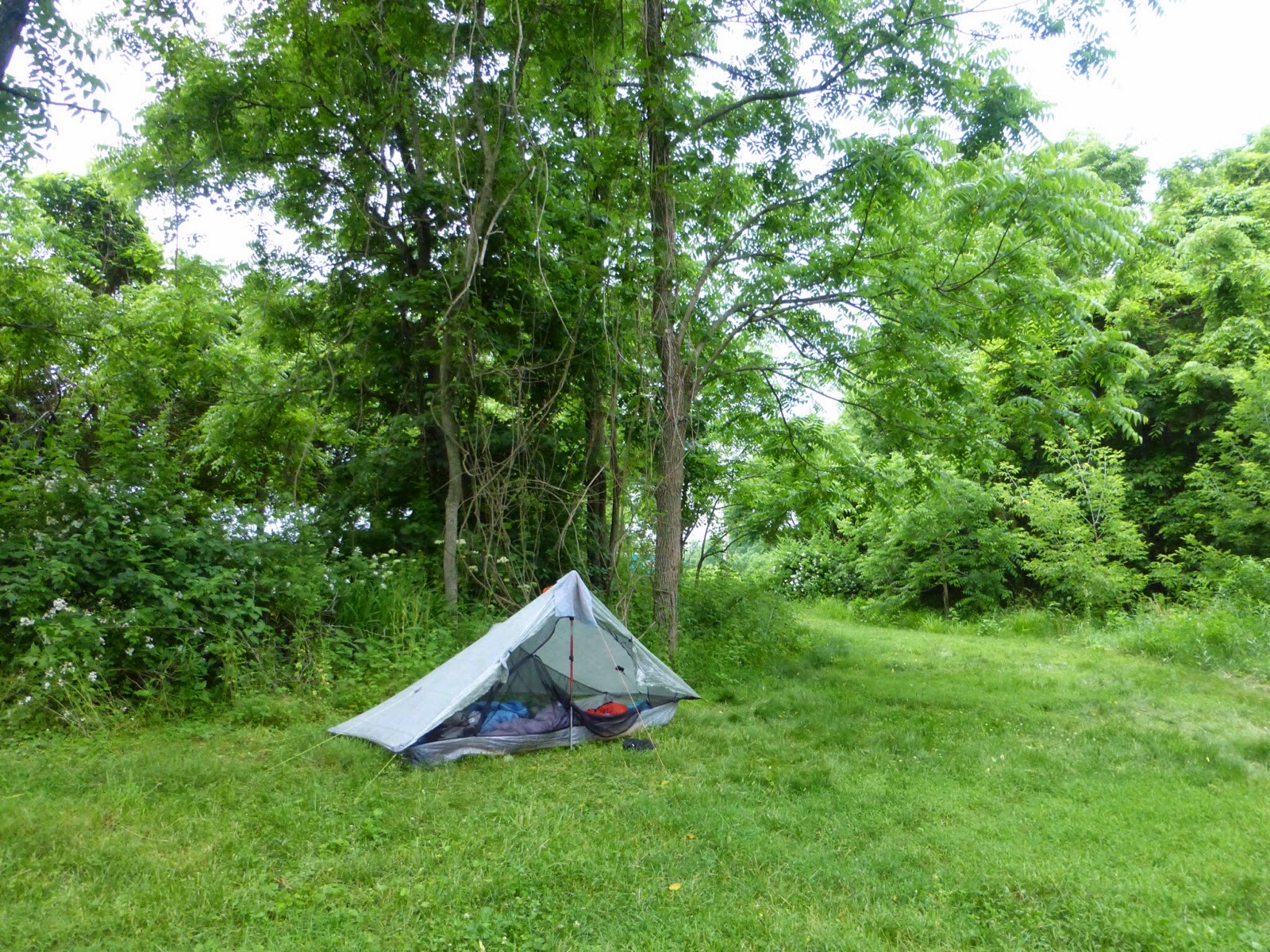 The other side has about 20yds of trees with railroad tracks on the other side. I’ve been here three hours and two trains have come by. One was long, loud, and screeching. It’s gonna be quite a night. One of the hikers here named Handsome is doing a flip flop going north from Harpers and then will return to go south once he hits Katahdin since he just finished college. He said his dad has followed my blog and just told him to be on the lookout for me. We just had to take a photo together and give a shout out to McDoggy who did the AT in 1981. Hi McDoggy! 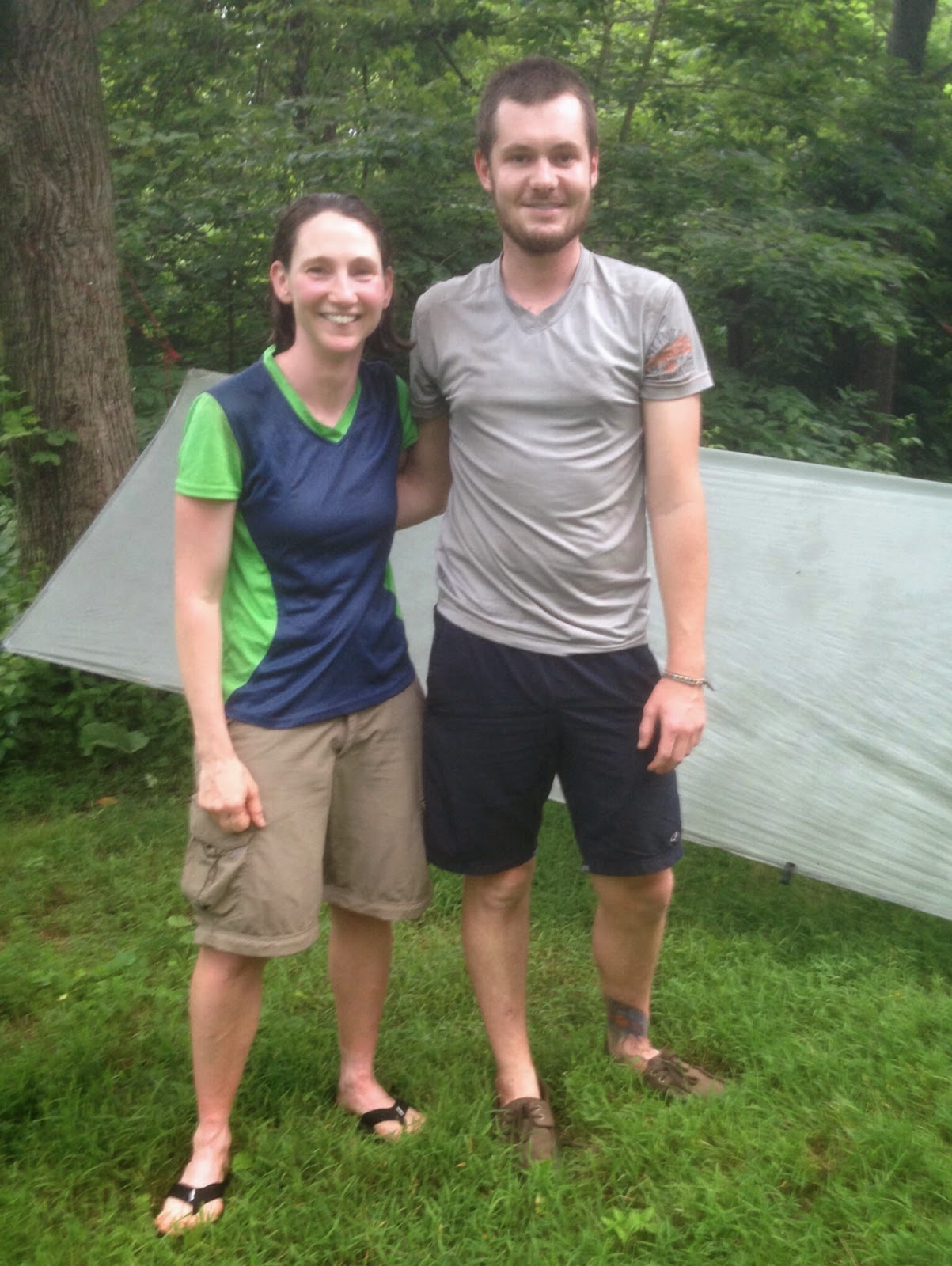 I have good service tonight and will be ending this day the right way with a bit of an episode of Parks and Recreation, yay!

One other thing, there was national news today about a school shooting in Oregon where one student was killed. That is one of the schools where I substitute! Just crazy to think that happened there or in any school!