I forgot to mention yesterday that when I tried to turn on my stream drenched camera, it worked! It’s back and working good as new after it fell in water two days ago. Whew, close one!

I was up past midnight finishing up things last night and still somehow woke up around 6am at Frank and Dori’s. They had me back on trail around 8:30am and we even made a pit stop for me to use my Subway gift cards to get a breakfast and lunch sandwich! I was excited to be hiking in with a footlong for lunch. Thanks again to Frank and Dori for being wonderful hosts. When we drove into Port Clinton, I saw many of the other hikers I’ve seen lately also packing up to hike out. As I hiked in, I was on the phone with my dad and immediately missed a turn and walked a couple minutes before realizing it. That was an early indication of how this day would go today.

The hiking was smoother than expected with about a third of the day on rocky trail and shirt stretches on rock boulders. I leap frogged with a new group I hadn’t met that is very nice. From front to back, their names are Dr. Zoom, Rosie, Naked Ninja, and Impact. As you can see, most of their group has the strategy of hiking shirtless in the heat. There was a decent climb up to start the day and we were spread out thinking we’d all meet at a viewpoint called The Pinnacle for lunch. I was hiking a bit ahead as they stopped for a break. I was in larger rocky section and was keeping an ok pace as the rocks are easier to grip when they are dry. I placed my foot on a slab bigger than me that was angled quite a bit (which most are not level) and my foot slid down the rock when I put my full weight on it to push off. I ended up sliding on the side of my leg and knee down the rock and was down before I could hardly react. I came within an inch of slamming my cheekbone on a sharper rock protruding out and luckily came out of it with what I am calling rock burn. Fortunately, I did not slam anything on the rocks so there was no bruising or more more than surface damage. Here I am at lunch with my Subway, using the umbrella for shade, and showing my rock burn. 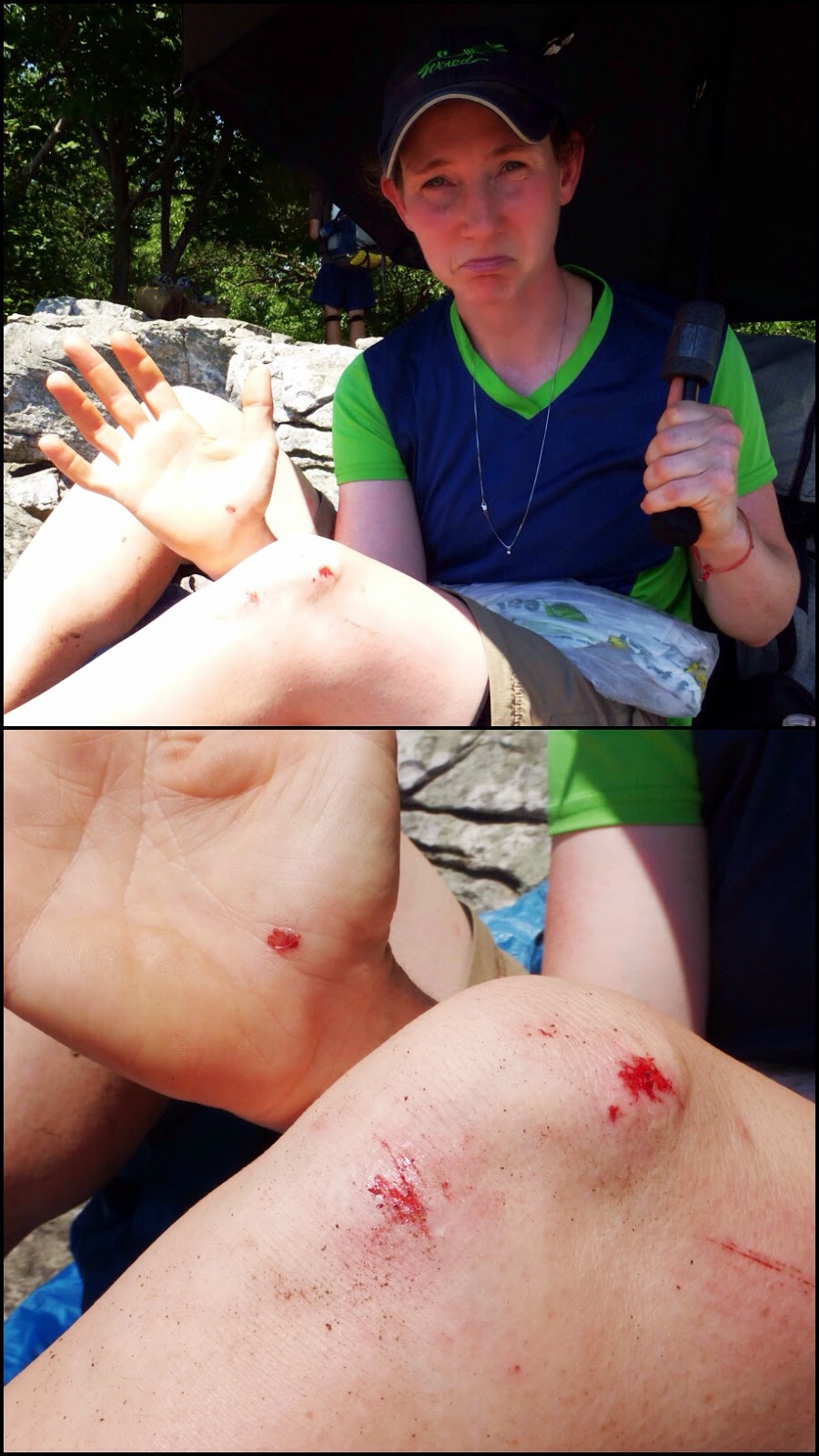 Just before lunch, I turned a corner to see Yeti and Smurfin’ ahead of me. They are the mother daughter team I’ve seen a couple times now and was excited to catch up and say hi since I keep forgetting to take their picture. When I was about 30yds from them I got their attention and then asked if they were going to the Pinnacle that was just off trail with a view. They said they weren’t and that we actually had passed it just a bit ago. Ugh, I was so distracted catching up that I missed the turn. I hollered to them that I’d catch up later after lunch and ended up eating with Rosie, Dr Zoom, and Impact. The Pinnacle was a similar view of farmlands and trees that we’ve been seeing, but on nice big slabs of rock. There was even a rattlesnake up there between two of the slabs. We also spotted(or heard) another rattler in tall ferns soon after lunch. 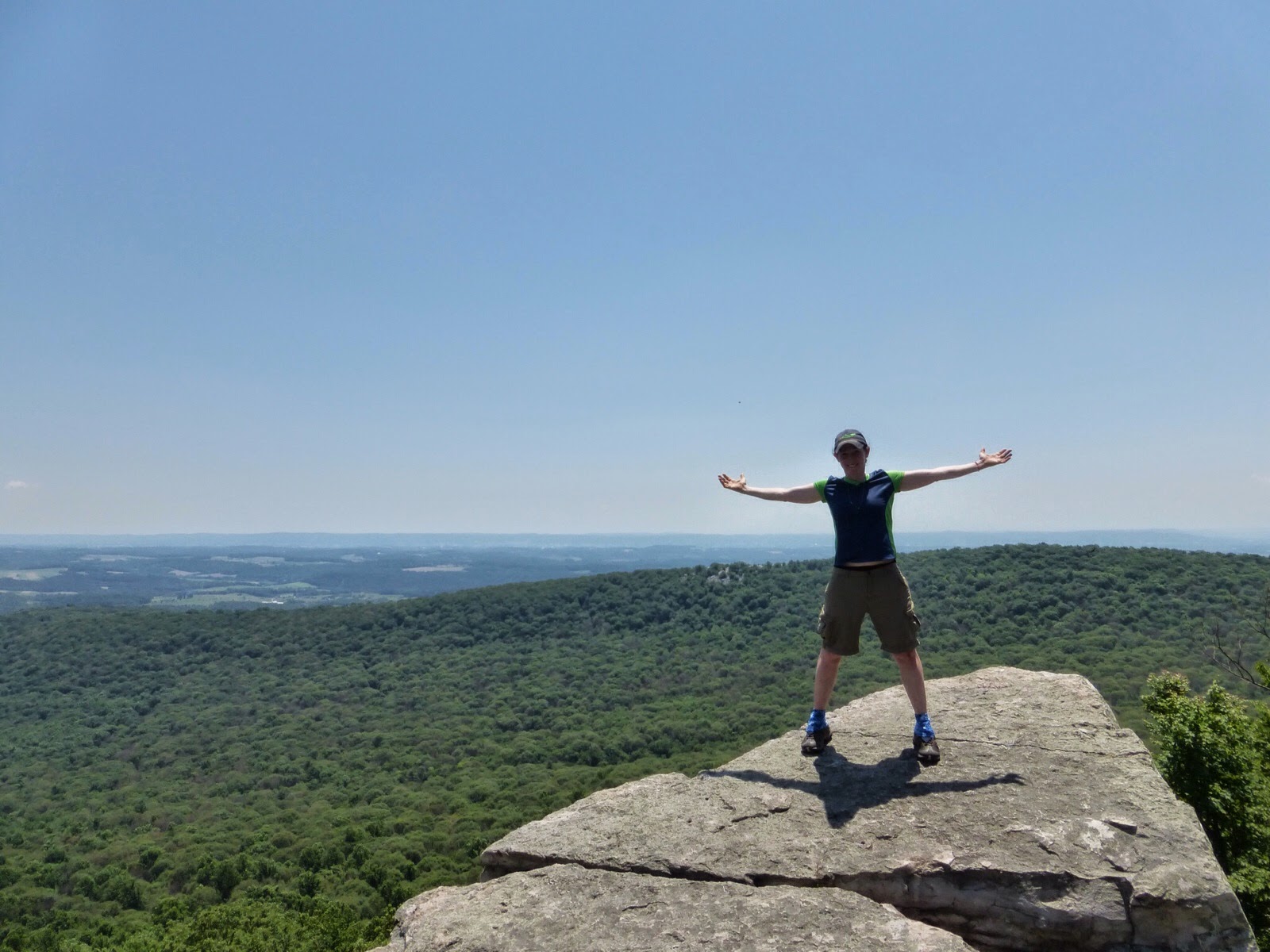 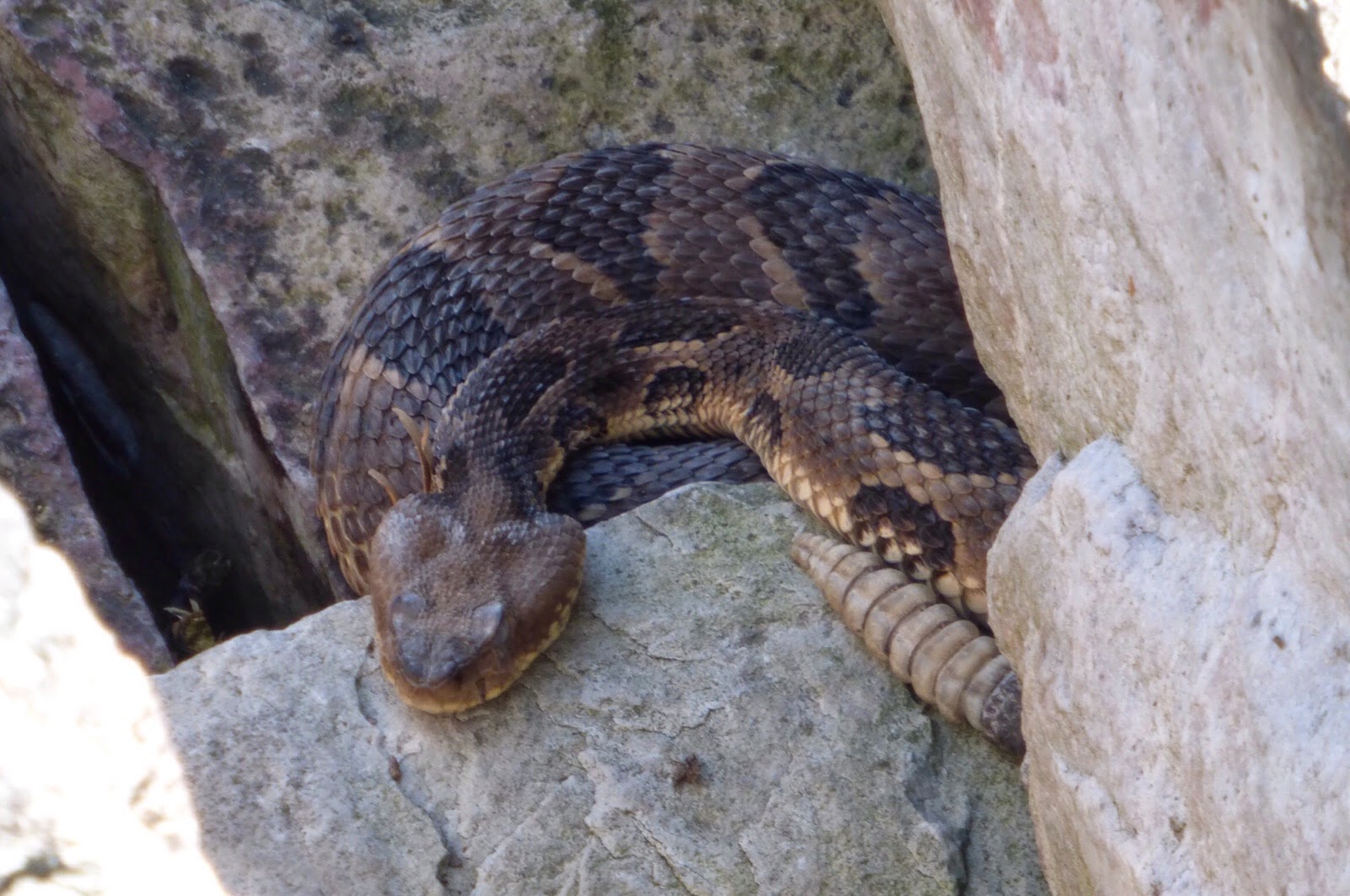 I leap frogged with the group the second half of the day and was able to get action shots as they hopped along the rockier parts. 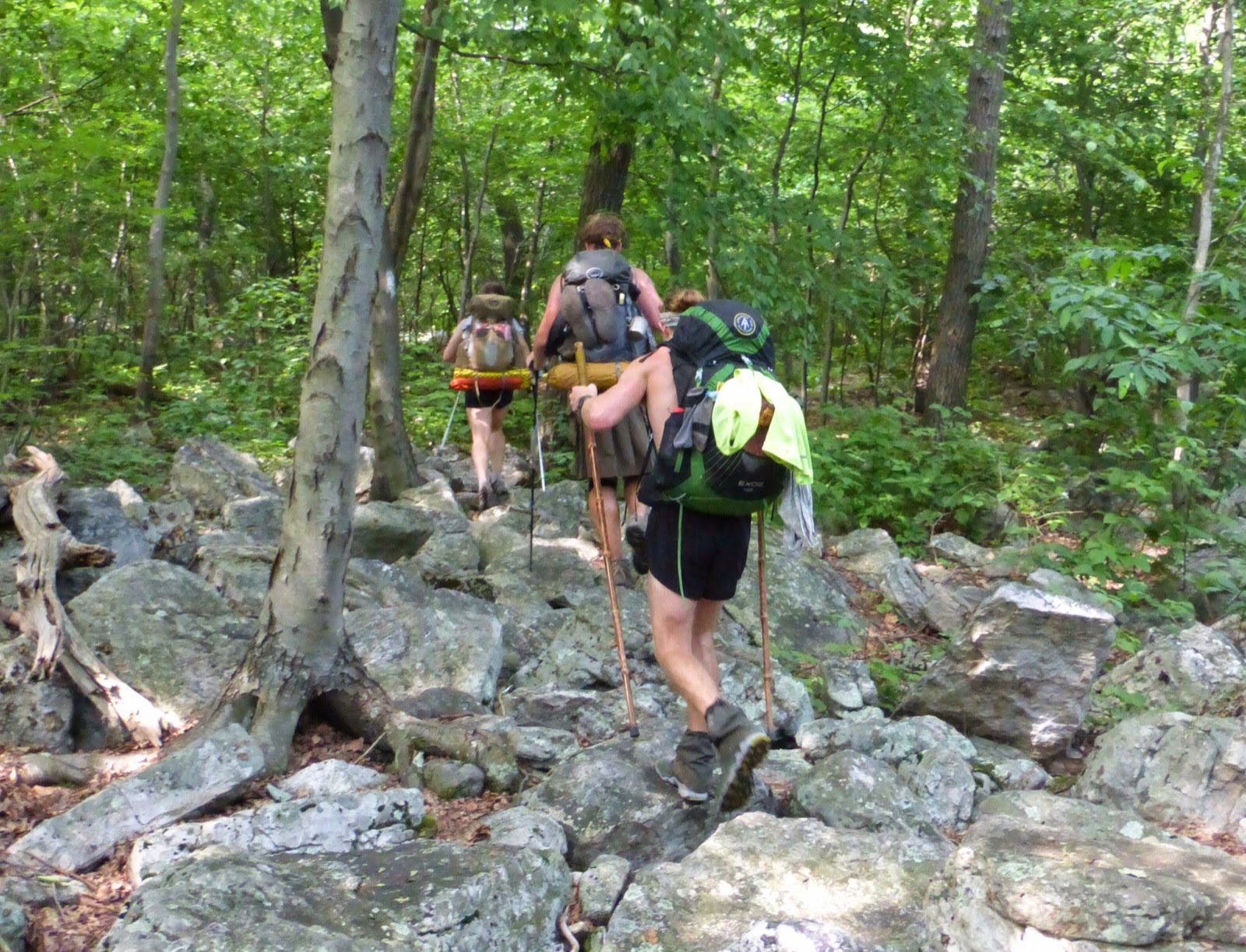 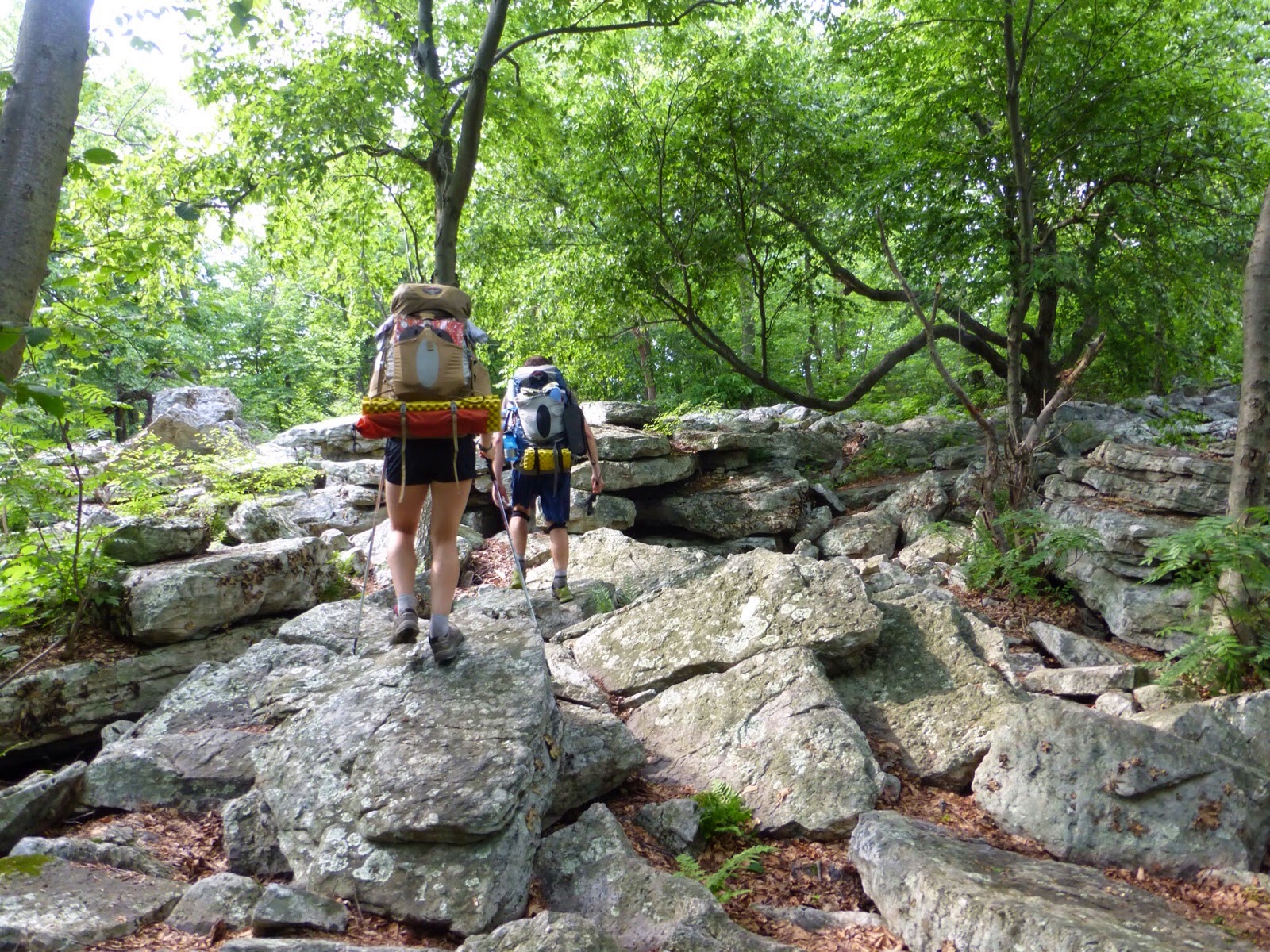 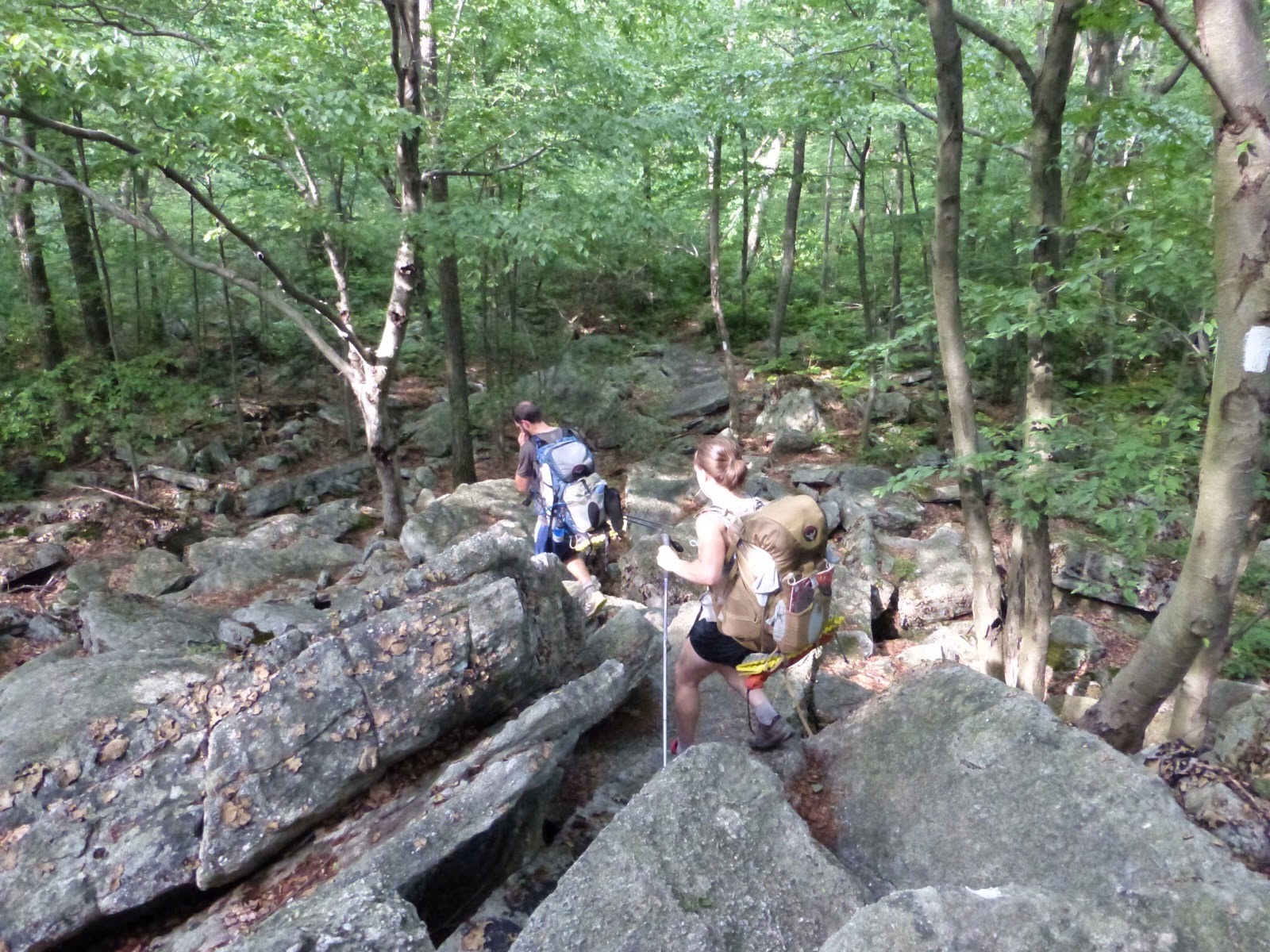 I was ahead at one point an ran into two college gals out on a day hike that I had seen hours earlier. They had gotten turned around and missed their turn so I helped them figure out where they needed to go and then walked back south (for the third time today) to get them water and treat it for them since their water bottles were empty. A good chunk of the afternoon was a nice downhill on an old forest road and that was nice to cruise. 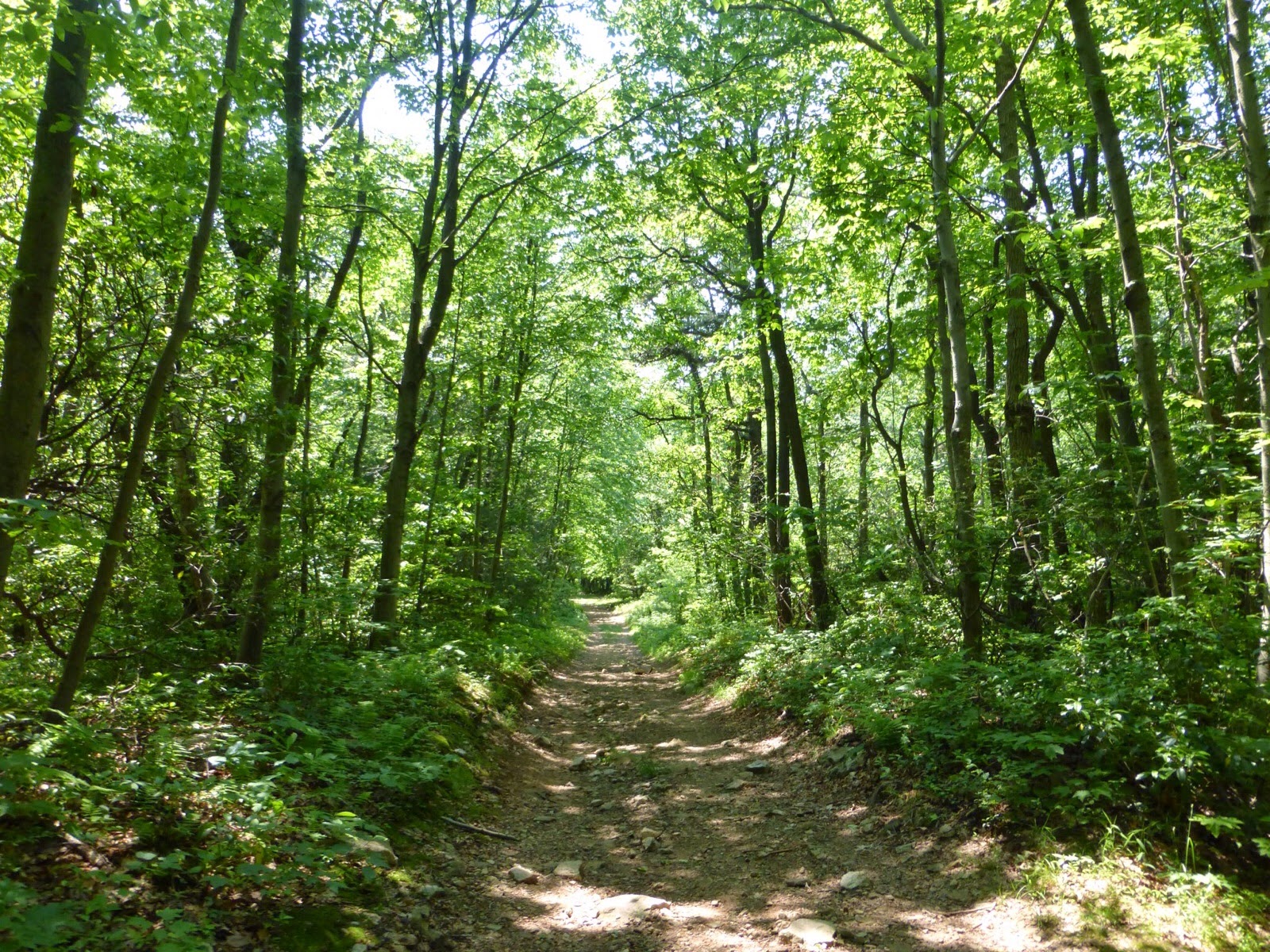 The end point for the day offered many options with unknowns. One was a shelter with possible camping to fit everyone, but an unreliable spring. The other was a bit further with a sure spring, but unsure camping options. The group chose to grab water at an early spring and aim for the camping near the shelter. I chose to roll the dice with the next spring and hope for a flat and non rocky spot to camp. When I got to the first option, I finally caught up to Yeti and Smurfin as they were also choosing to roll the dice on a campsite near the next spring. Well, we got good water, but had to hike over a mile further to find a flat spot to camp without rocks. It felt like an eternity as it was already much later than most of us like to camp. We ended up camping at 7:15pm, which wasn’t too bad given the late start from town. Also, I got my picture of Smurfin’ and Yeti. So cute! 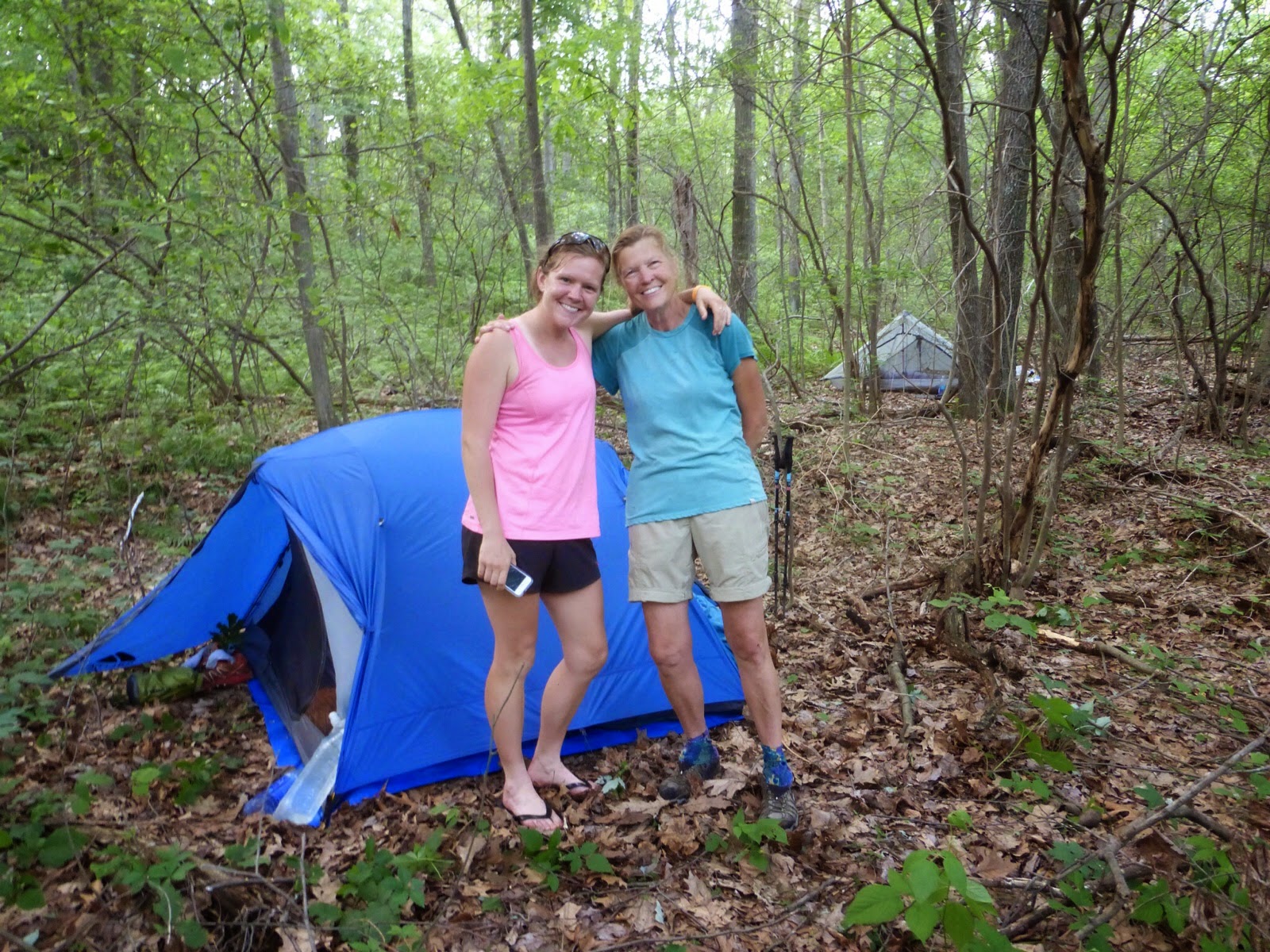 There is rain expected overnight tonight and thunder and lightning have been going for awhile now, so I’m sure it will be here soon. It’s almost nightly these days. It should clear by tomorrow and then return for a day of rain possible the day after tomorrow. More rain…sigh. My plan is to hike more tomorrow to give me less to do the next day in the rain, and hopefully I’ll make it to town that night. We’ll see…