I had a good night of sleep last night and got going around 6:40am this morning. You can see by the elevation chart that things are getting more rugged. There were a lot of small ups and downs and many of the morning ones were rock scrambles where I just put the trekking poles away. I was glad that I did the extra miles last night because these rocks slowed me quite a bit! I was feeling the burn on these climbs. 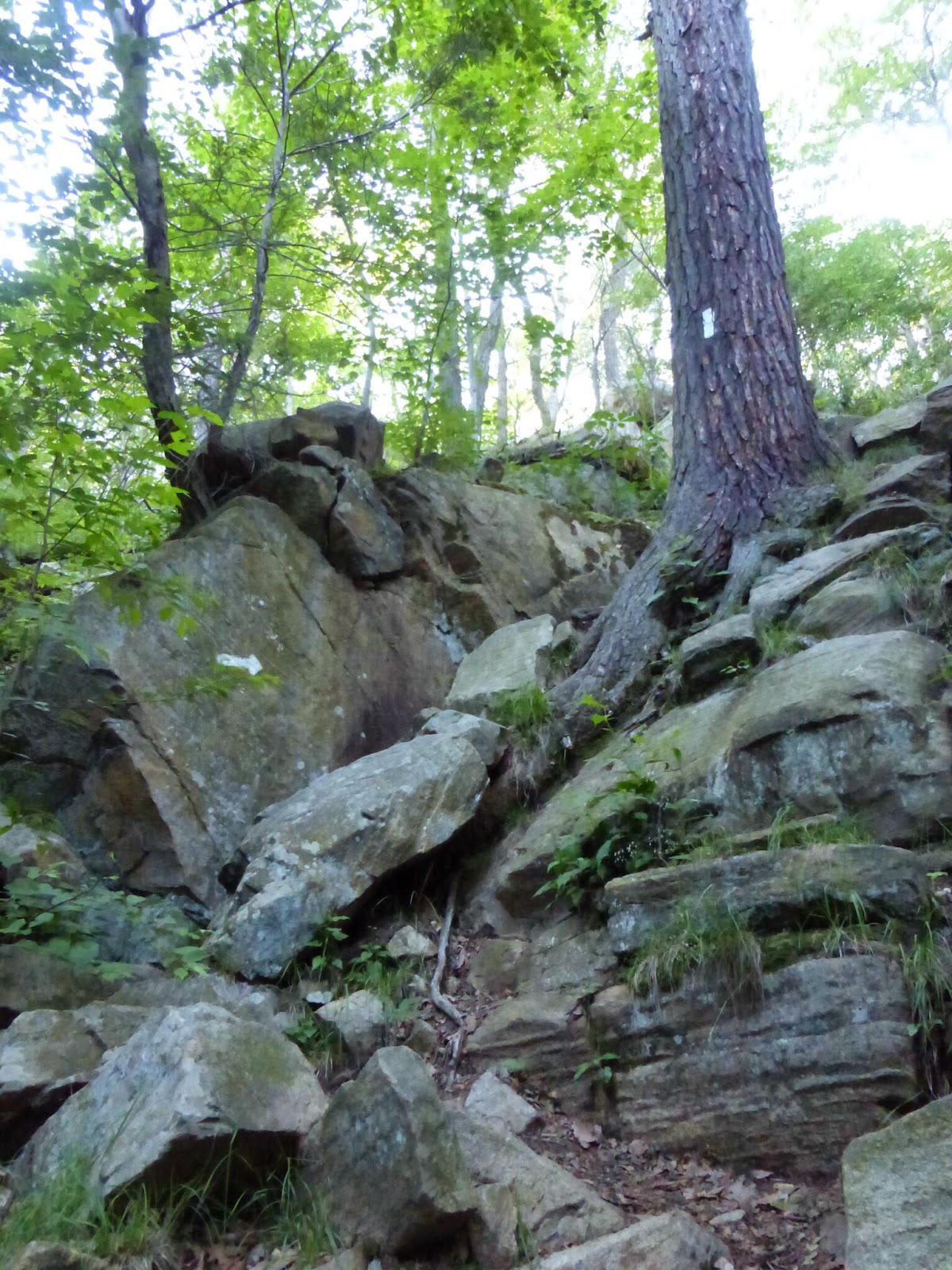 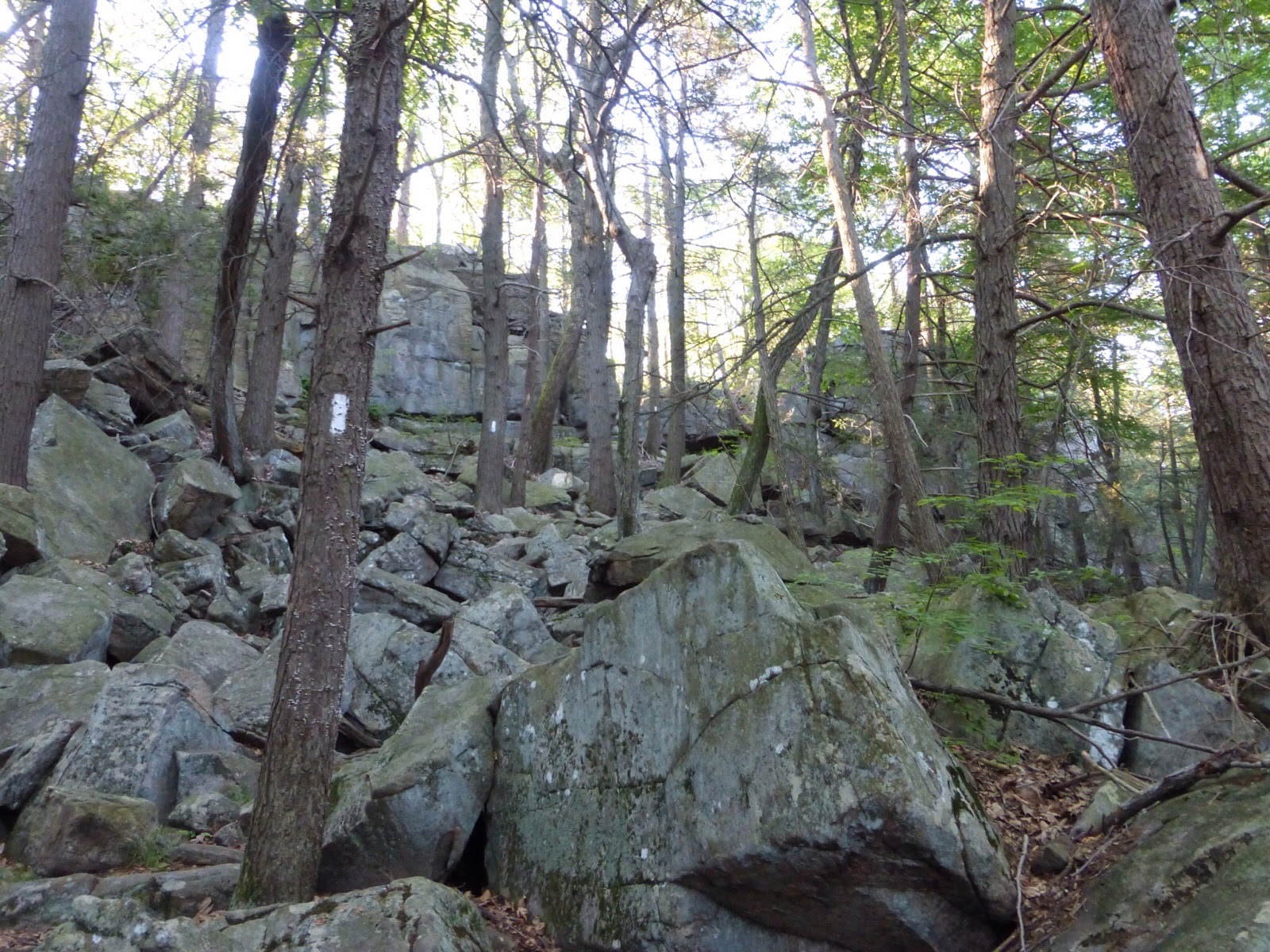 It’s odd because I actually enjoyed the challenge of it. I think I’m just ready for what we’ve all been waiting for. I like how the trail gets more rugged at the northern ends of the PCT, CDT, and AT. It’s like our bodies have been working up to this and there is a lot of build up to the more challenging hiking. I like that type of progression and even though it was slow going and tiring in places, it felt good and had me hopeful for what’s ahead. 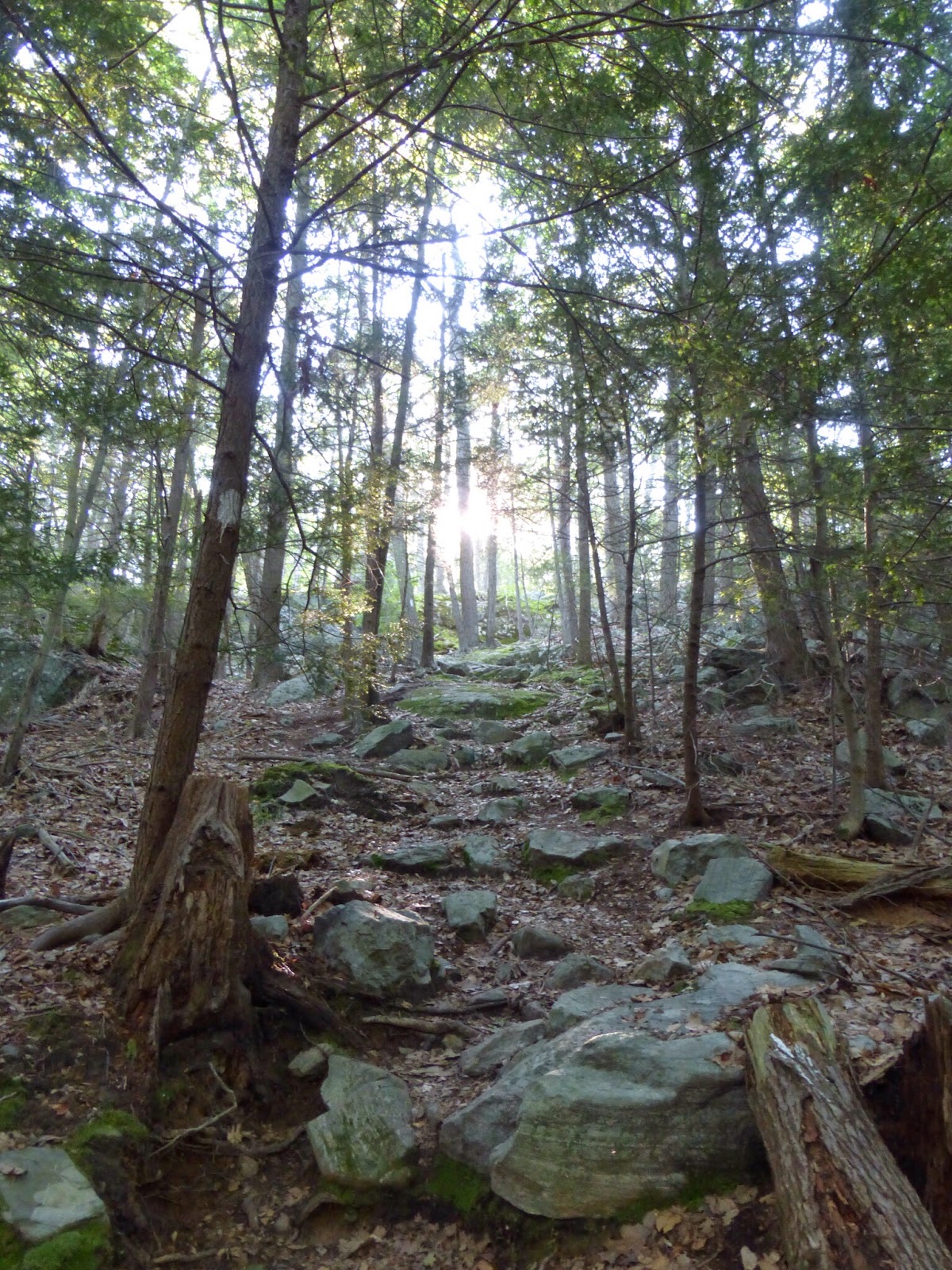 I mentioned a bit about the water sources yesterday, but I wanted to elaborate a bit more. One of my favorite aspects of the AT is how little water I have to carry and how often I don’t need to treat my water. I’m used to getting at least two liters at a time on the other trails and here it’s usually a liter or less because of how frequent water sources are on the AT. There there are many times that the trail goes by public fountains or spigots and I don’t even have to take time to filter. This leg in particular, it has happened a lot. The first days of this leg, there were many spigots at the state park or along houses that offer water. Today, I was surprised to find that at four road crossing this morning, there was a TON of cached water from trail angels. It was wonderful! I drank a lot more with those climbs and it was great to just fill up each hour or so. It’s such a simple and basic thing, but it’s the best trail magic! THANK YOU to whoever left all that water! 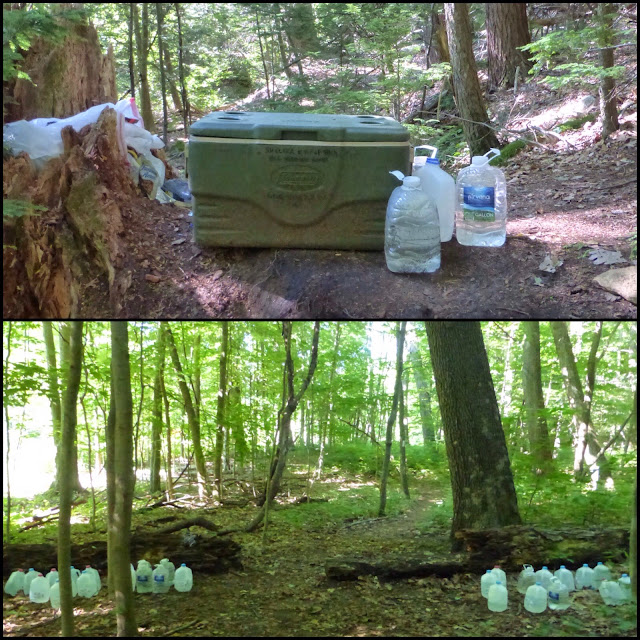 I saw no thrus today and figured that would happen since they all got off for the soccer game last night. Later in the morning, I ran into Ryan who was doing an overnight and just leaving a parking lot from his car. We hiked together for a couple hours until lunch. He attempted a thru and started a week before me, but stopped after a week finding that the rain and cold wasn’t for him. He may be back someday. We went through a well known spot called the Lemon Squeezer…you can see why. We had to take our packs off to get through as it got narrower. 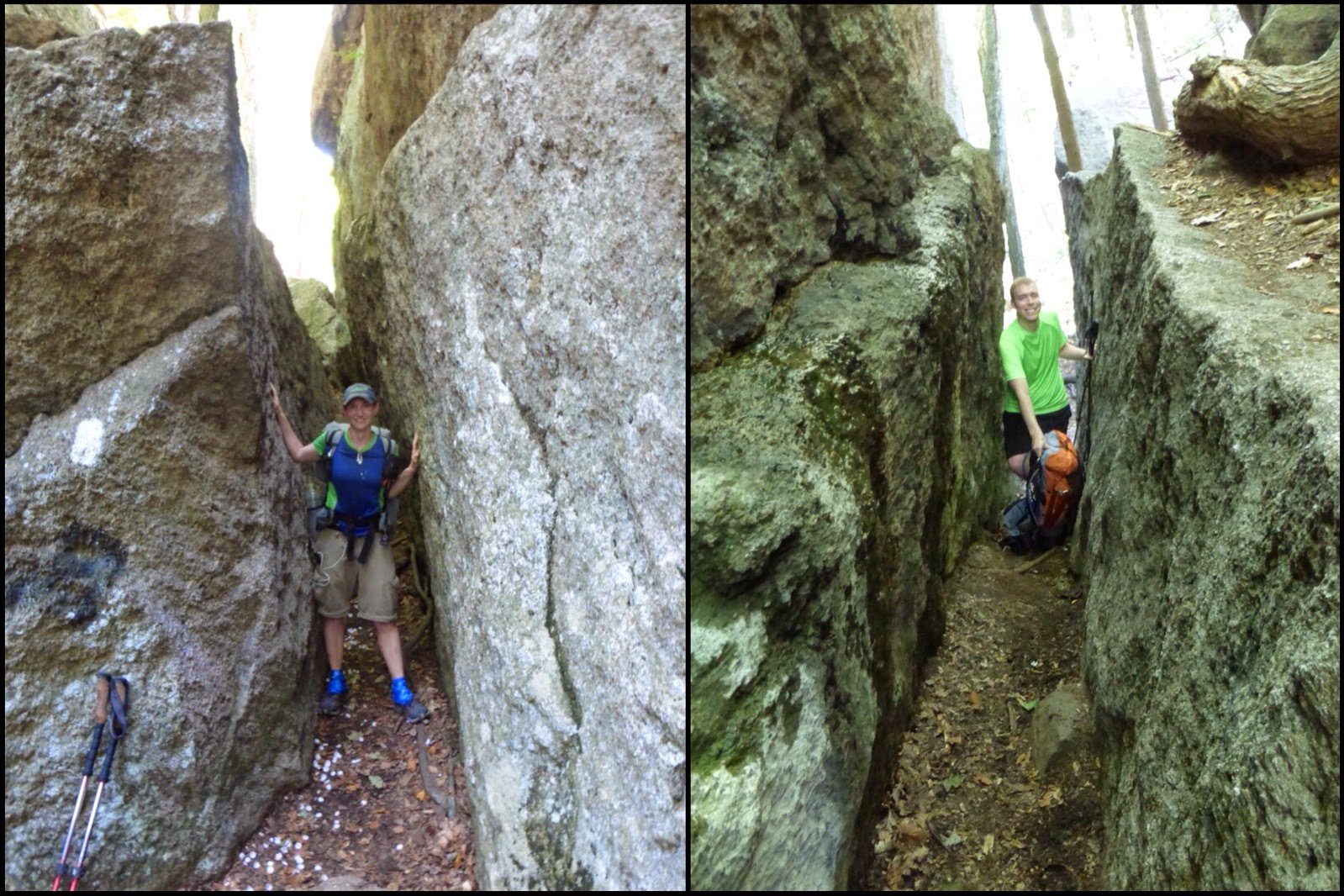 Just before lunch, we approached a huge shiny blue tank that had a solar panel on top. I saw it from a distance and my CDT instincts kicked in and I got excited that there might be water near it. If so, I’d be set for the day! It was fenced with barbed wire and I was determined, so I walked over to see a water pump in the fence…I could reach through, but not get the leverage to lift the tight lever. Ryan was smart enough to think of using our poles to pry it up and voila, it worked! We pulled the hose through the fence and were quite proud of ourselves. I was proud that I didn’t have to filter water at all today! 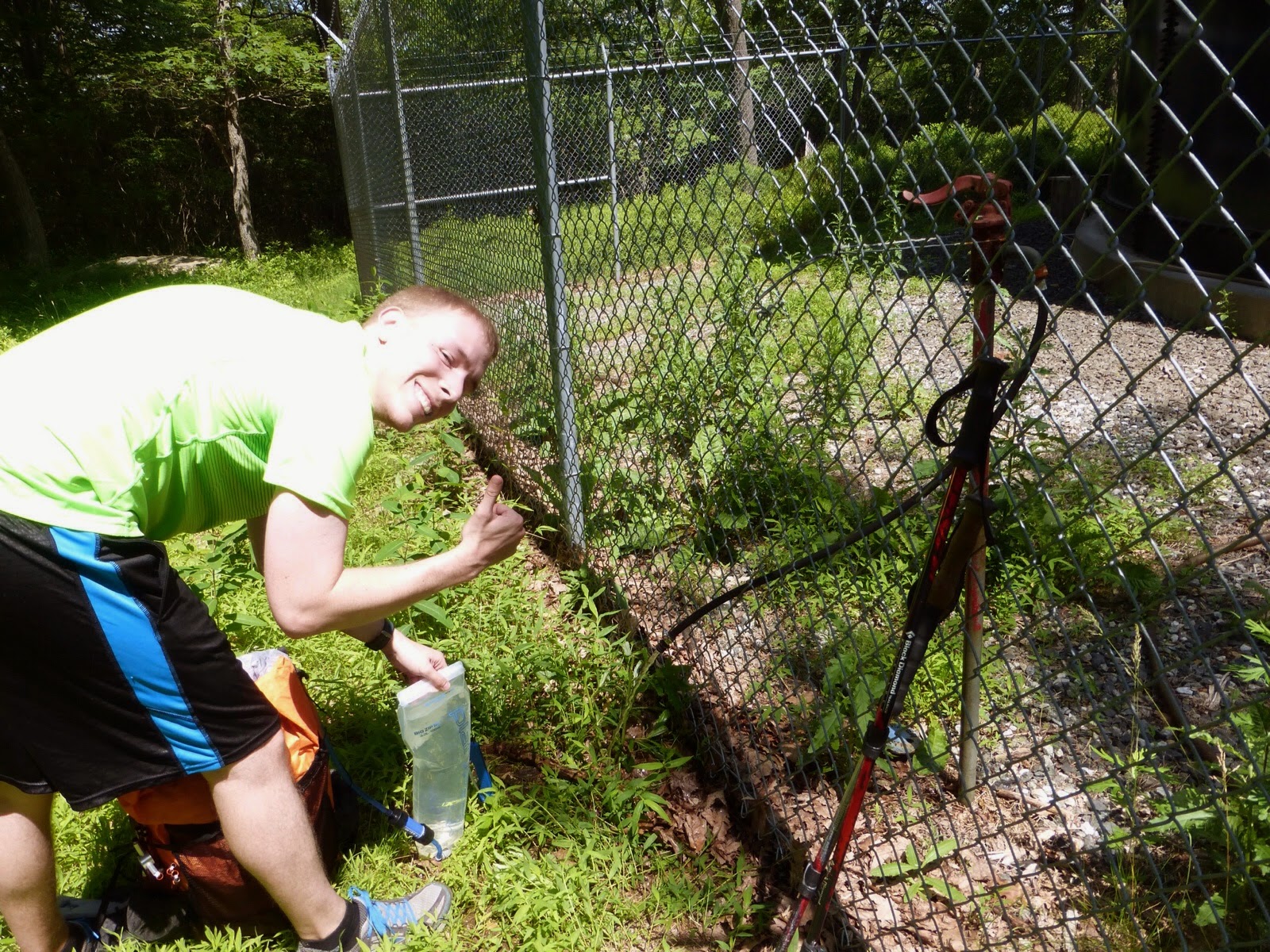 We soon stopped for lunch and as we were sitting there Ryan calmly said, there is a big black bear right there. I thought he was kidding with how calm he is and he later said that’s was his freaked out calmness cause he’s never seen a bear. The bear didn’t even notice us and I got a video as it just moseyed on by. So cool! Here is the link if the video doesn’t appear for you below on your device.

Ryan and I split after lunch.The trail was mostly in the woods today, but would pop out to nice viewpoints and clouds were gathering so it looked cool. They eventually covered the sun and made afternoon hiking much more enjoyable. The trail got very close to New York City and crossed Palisades Pkwy (which was like a high risk game of frogger!) with a sign saying 34mi to NYC.

At the end of the day, my final climb was up Bear Mtn, which is a popular tourist destination with Perkins Memorial Tower on top. The trail was pristine with mountain laurel, a wide gravel path, and wound upward very gradually. I found it to be a hilarious comparison to this morning and I thought of how many people from New York City must hike this and get lured into hiking the AT based on such nice gradual hiking! 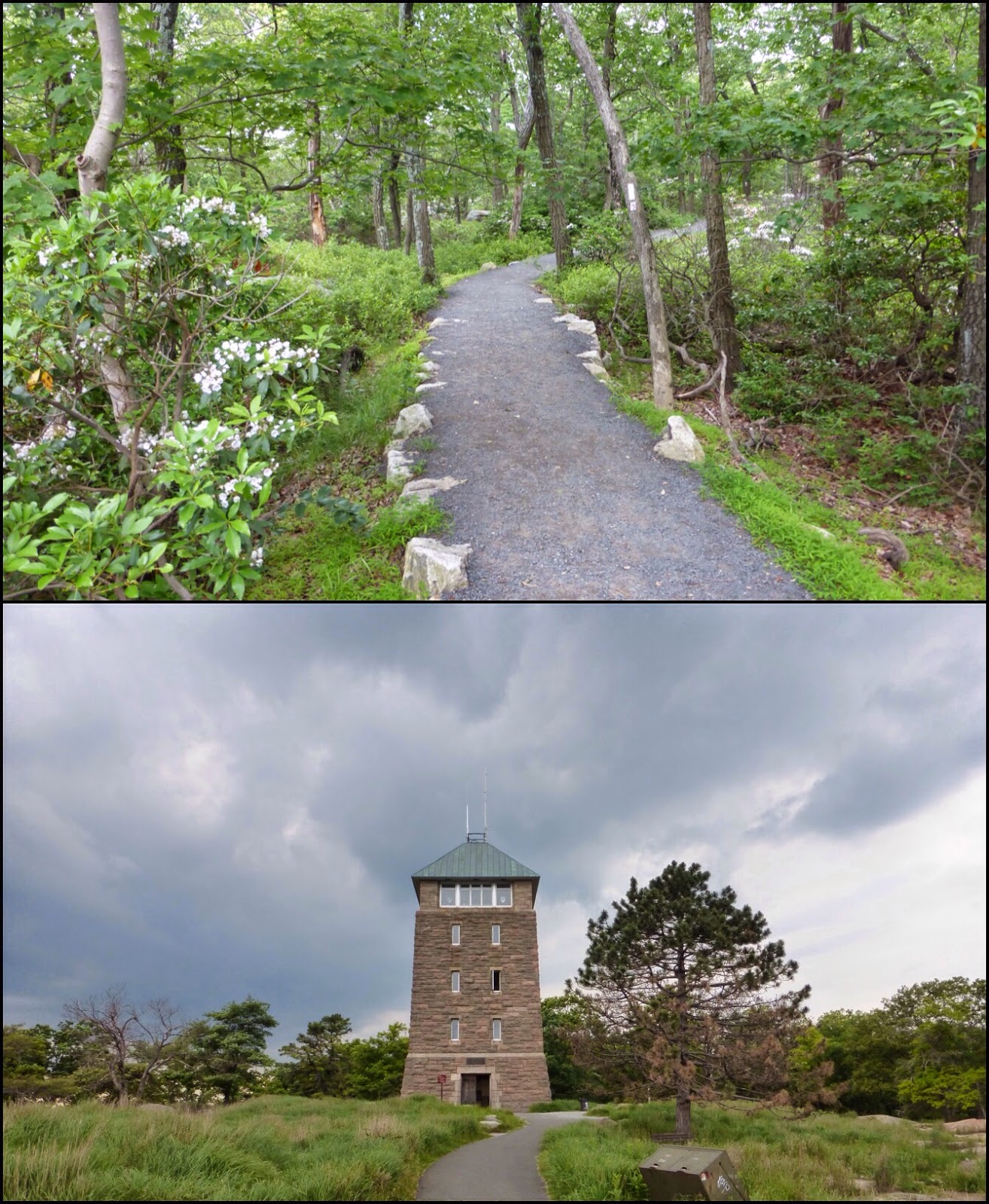 At the top of Bear Mtn was a nice view and in the distance was the New York City Skyline. It was pretty hazy today so it was not as obvious as it could be. I’m standing next to it and then I took a picture zoomed in. Pretty cool! 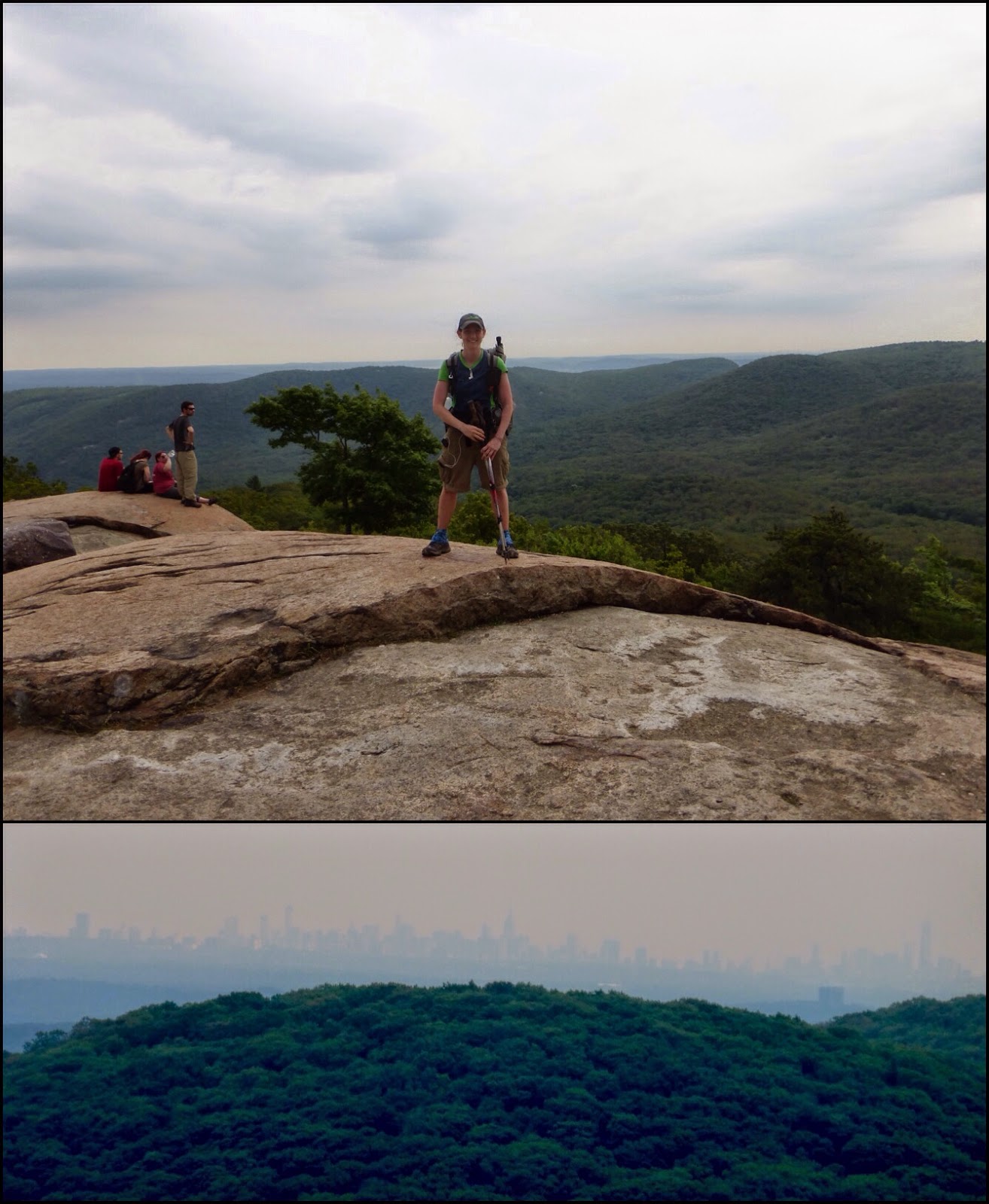 The trail then went down some very nicely cut rock steps for a couple miles and led to the popular Bear Mtn Recreation area. I liked Hessian Lake there and the trail wound through the nice park. I have noticed much more diversity in age and race along the trail this past leg and the same was true at this park. I have appreciated this section for that as I like seeing such a range of people outdoors. 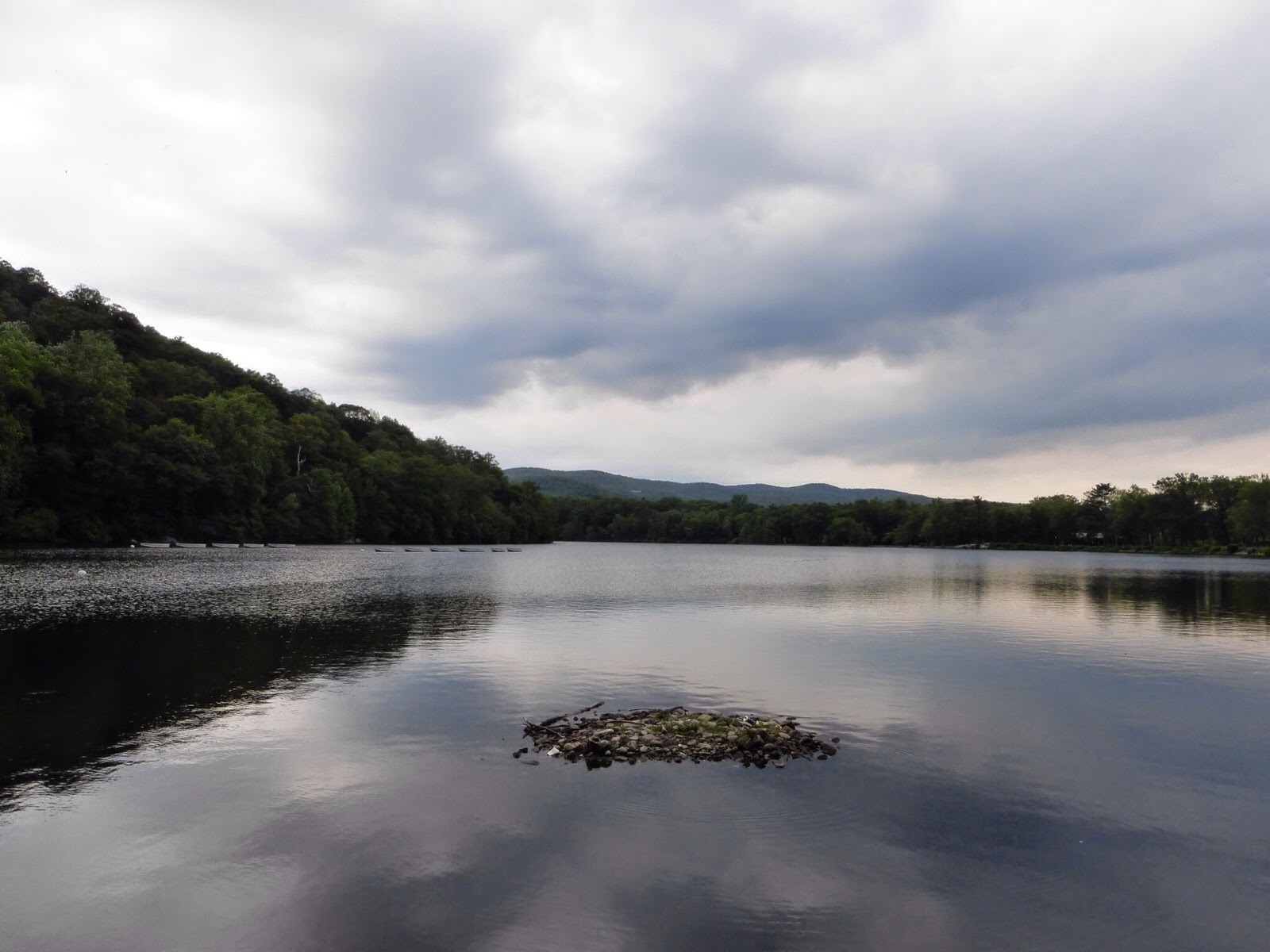 The trail then goes to it’s lowest point on the whole AT when it goes through a zoo next to the Recreation Area. As you can see by the sign, there is a detour to take while the zoo is closed. What a bummer! 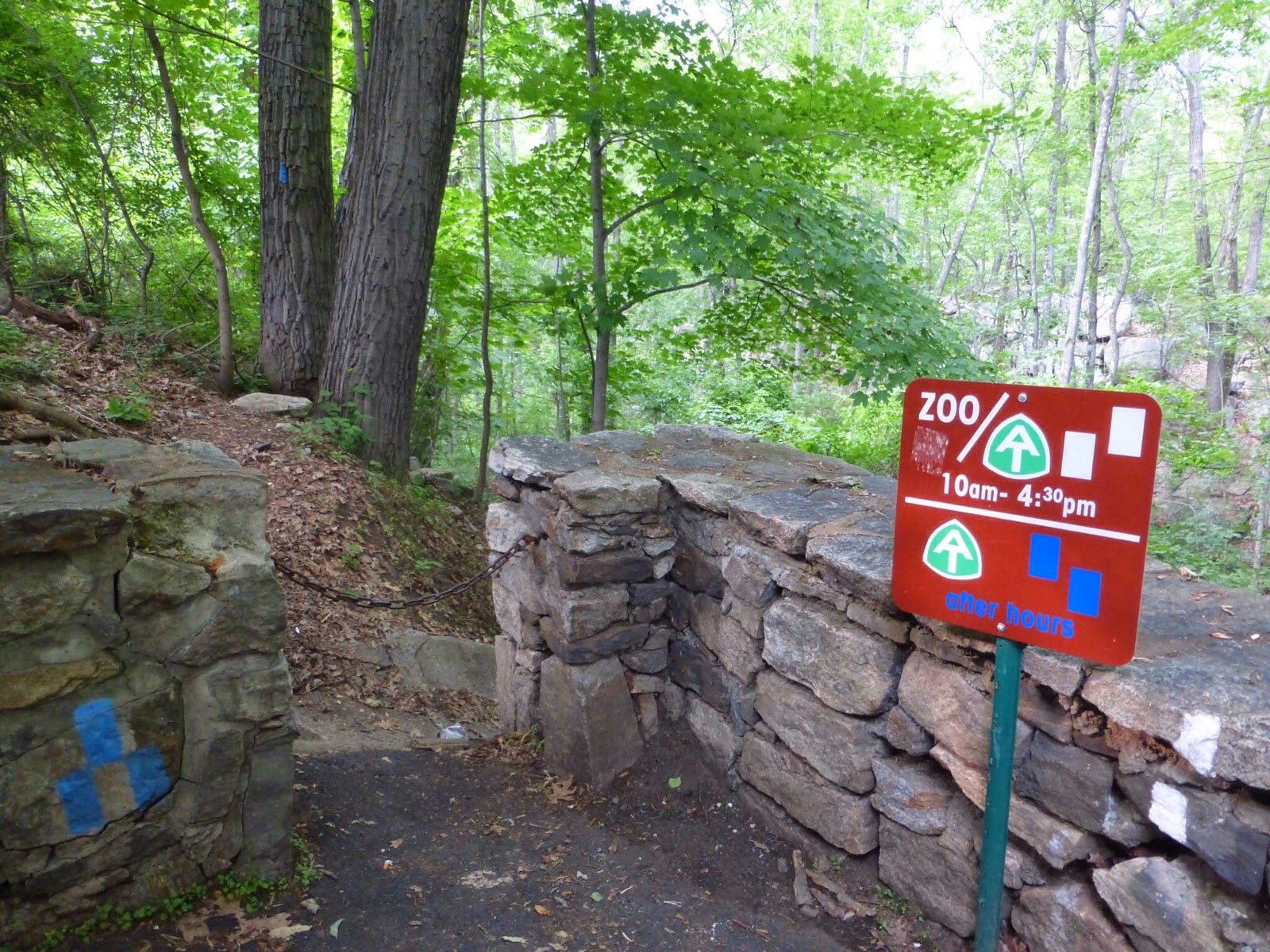 I took the blue and it spit me out to a busy circle of merging traffic and exits. I chose a motel 1.5mi away and there is no hitching in NY, so I stood there kinda waving like I was asking for directions. Within two minutes a woman pulled over and gave me a ride to my hotel and I had her drop me off next door at a BBQ place. I ate and was at the hotel by 8pm to then do laudry, shower, and this post. I stopped my miles at the zoo and plan to start there tomorrow to see the zoo and the lowest point on the trail. When I calculated my miles, it turned out to be 26.2mi…a marathon! I love it when that happens on trail and it rarely works out to exactly a marathon distance. The funny thing is that I’ve only been to NY once before and that was for the NYC Marathon…it was meant to be! Check out my hotel room. Pretty fancy at the Holiday Inn Express. There weren’t many choices that were cheap this close to NYC and I wanted the computer and laundry so I was willing to pay more. I want to thank Brian who helped to make this one feasible. THANK YOU Brian! It’s a great reward to a tiring and challenging leg. 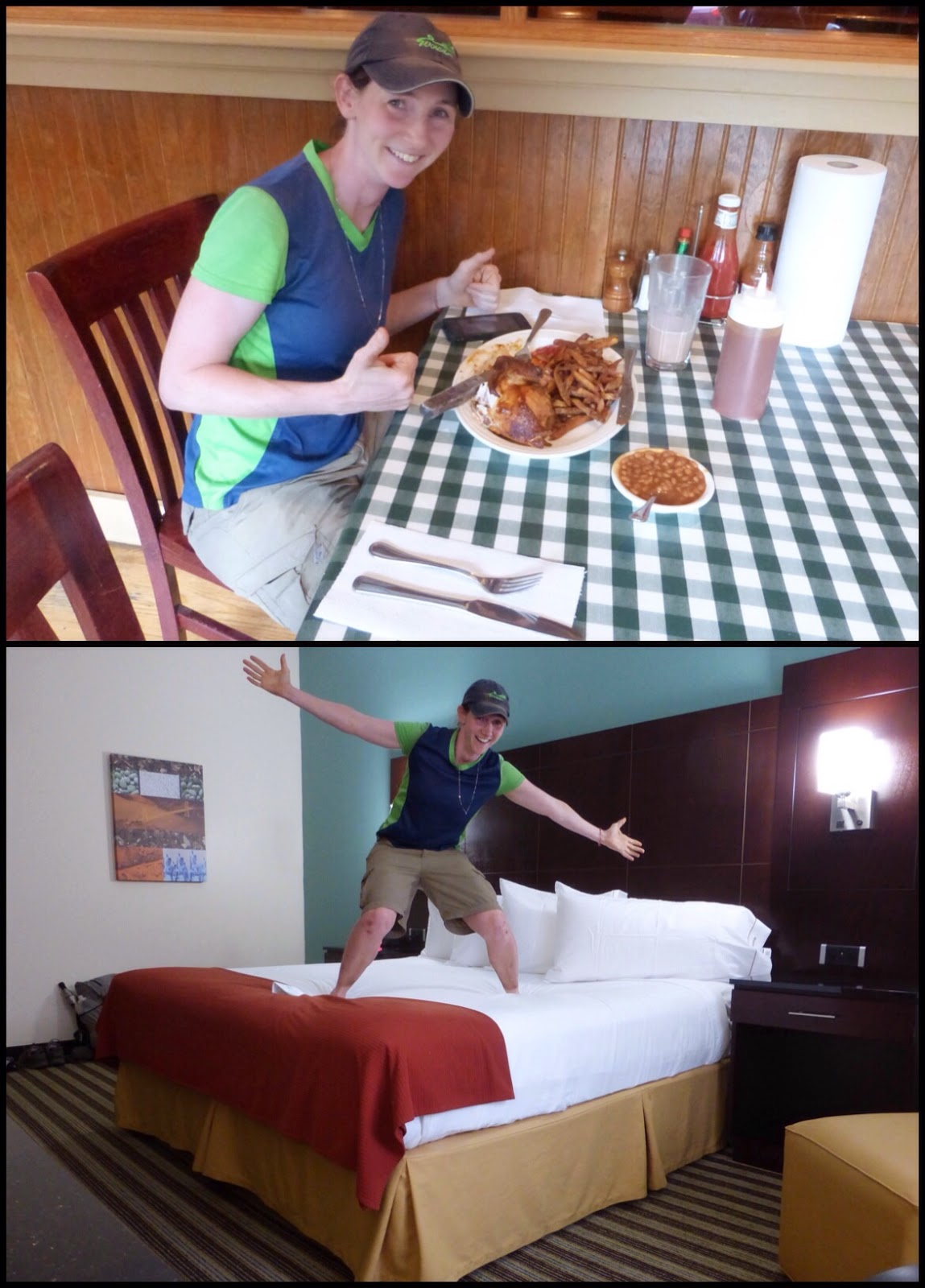 The plan is to hike a half day tomorrow after relaxing(watching OITNB!),doing my resupply, and blog stuff tomorrow. It is now 10pm and I’m off to watch an episode now. Ah, the good life!