This is a longer entry, but it’s worth it. Like I tend to do in towns, I stayed up way too late just past midnight last night. It was after 10pm by the time I finished laundry, shower, dinner, and the blog. I told myself to wait until the morning to do emails, but I still had a few I wanted to do to ease my mind. I also got distracted with some texting and fb messaging. Remember that I live on the west coast so it was prime evening time for them. Of course I ended the night by going on Netflix to finish the OITNB episode that I was on. The hotel (Holiday Inn Express) was glorious! It had oversized pillows labeled with different levels of firmness so no hotel neck issues! I woke up at 6:30am and forced myself to go back to sleep and got up at 7:45am. The breakfast buffet was great too. They had a pancake maker! It was great and much better than a waffle maker. You push a button to indicate how many you want and it makes it inside and comes out on a little conveyor belt landing perfectly on your plate. Loved it! The time went by quickly and I felt rushed and wanted at least a bit of time to relax, so I asked to extend my checkout time to noon.

I tend to feel guilty if I spend too much time in town (especially after a recent zero), but I didn’t get much time last night, so I am working on letting it go and allowing myself more rewards. I like to keep a balance of effort and reward, but tend to be a little strict on the reward end for some reason. I just like to keep the scale balanced or tipped more to the effort side as I feel that it’s bad luck if I don’t. I know it’s weird, but that’s how I am. My plan was to leave around 1pm to still get a half day of hiking in…but things did not go as planned…once again, a practice in letting go…

The area I was in was spread out and at couple miles from the trail. I was very lucky to have an escort for the afternoon! I was contacted through the blog by a local couple that offered to provide trail magic when I came through town in the form of transportation or anything else I would need. Heeerreee’s Johnny… 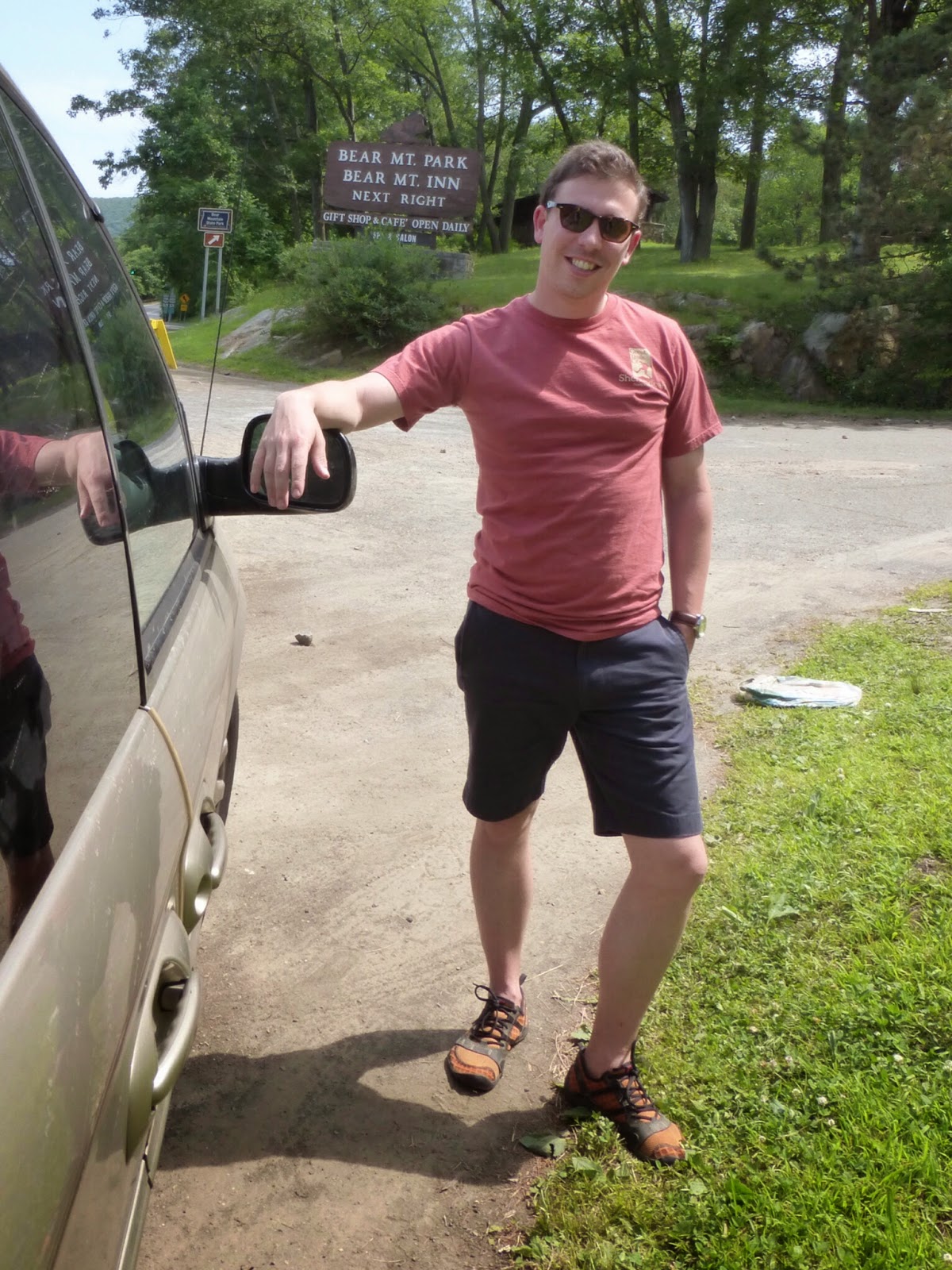 He came and picked me up at the hotel and we went to the PO to get my food package. I had bounced this box from its previous destination as I ended up skipping that town. Long story short, the box did not arrive and I’m bouncing it further to hopefully the next town. That meant I now needed to do a full resupply so we drove to a bigger grocery store in a nearby town. Good thing Johnny was there as this would have been quite time consuming to hitch to all these places. Then we ate lunch and I was back on trail by 3pm…two hours later than I’d hoped, but I’m letting it go…a little. Those who know me know I like a plan and get in a tizzy when it goes awry. I was pretty bummed not to have my comfort food and items, but they will hopefully reach me soon. I’m a creature of habit and have not gotten a resupply box in awhile, as I intentionally bought from town on other recent stops, so I’m missing my routine food and variety. I want to give a big THANK YOU to Johnny and his wife Rachael for reaching out and offering support. It made things so much smoother than they would have been!

Now for the cool part…Johnny dropped me off at the small zoo, which the trail winds right through and I immediately ran into the hikers I separated from when they got off for the soccer game the other night. There were eight of them and it was great to see them again! Some of them I’ve seen in spurts over the last couple of weeks and they are a really great group of hikers that I enjoy. Also, the girls had converged and this was the most female hikers I’ve been around at once out here. We had to get a picture together so we stood at the AT’s lowest point, which is in front if the bear den (empty today) at 120ft. The line by height wasn’t even intentional. I swear I don’t feel that small around these hikers and it looks like they are so much taller! My favorite part is that we’re all solo hikers. Go ladies!!! 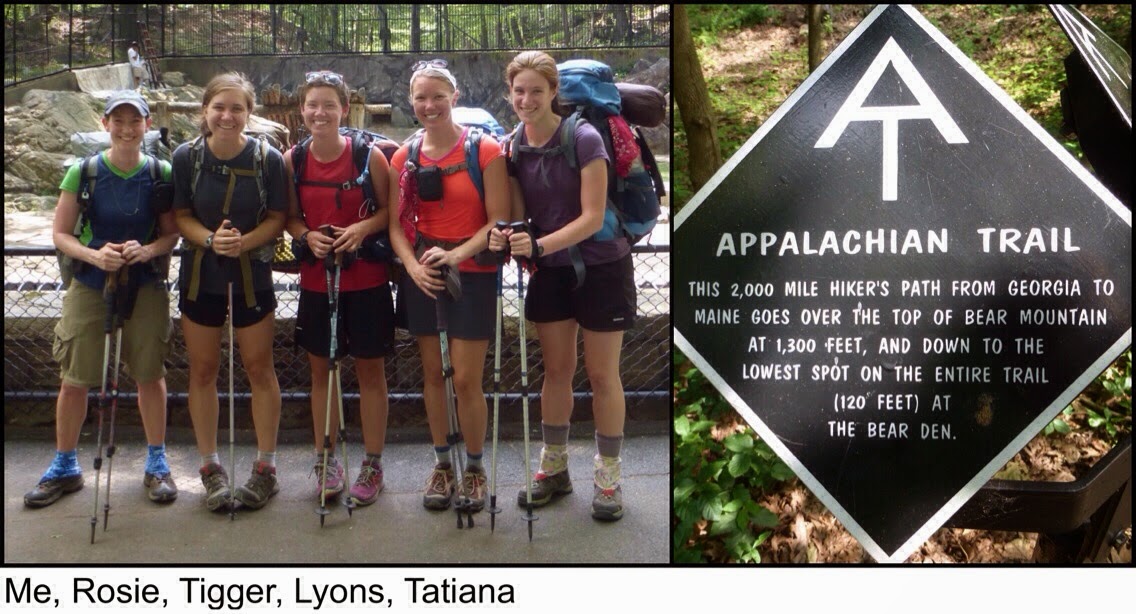 Immediately after the zoo was Bear Mtn Bridge which goes over the Hudson River and marks 1,400mi on the trail. So great and fun with this group. We were all pretty stoked about it. 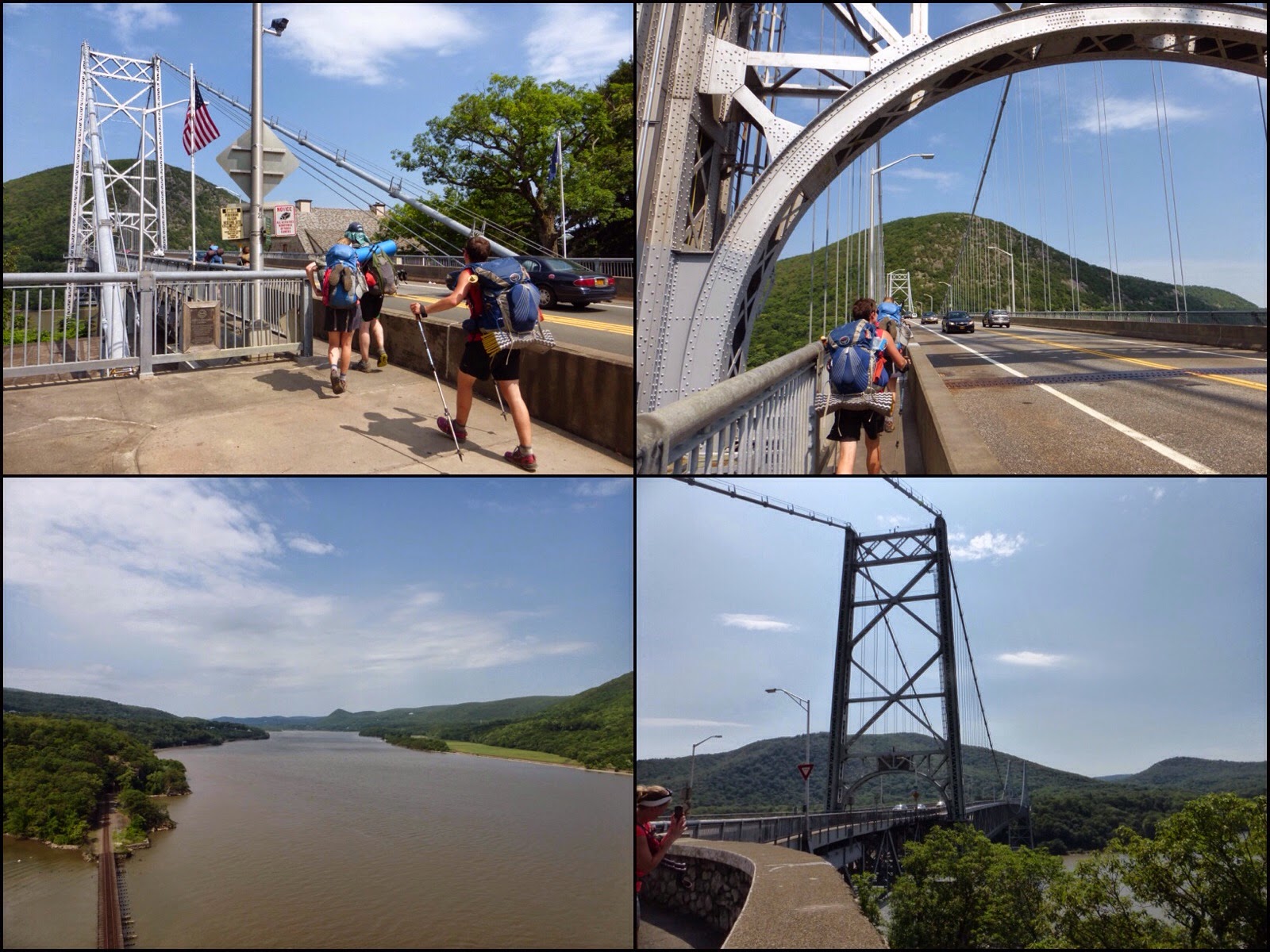 We spread out and some went into town. There was a decent climb up, but it went by quick with plenty of conversation. About 6mi in, the trail crossed a highway walking right by a gas station with a
deli. It was muggy out today and I couldn’t resist a chocolate milk and ice cream stop even though I was already 2hrs off my schedule and just coming out of town. Be proud of me for letting go! 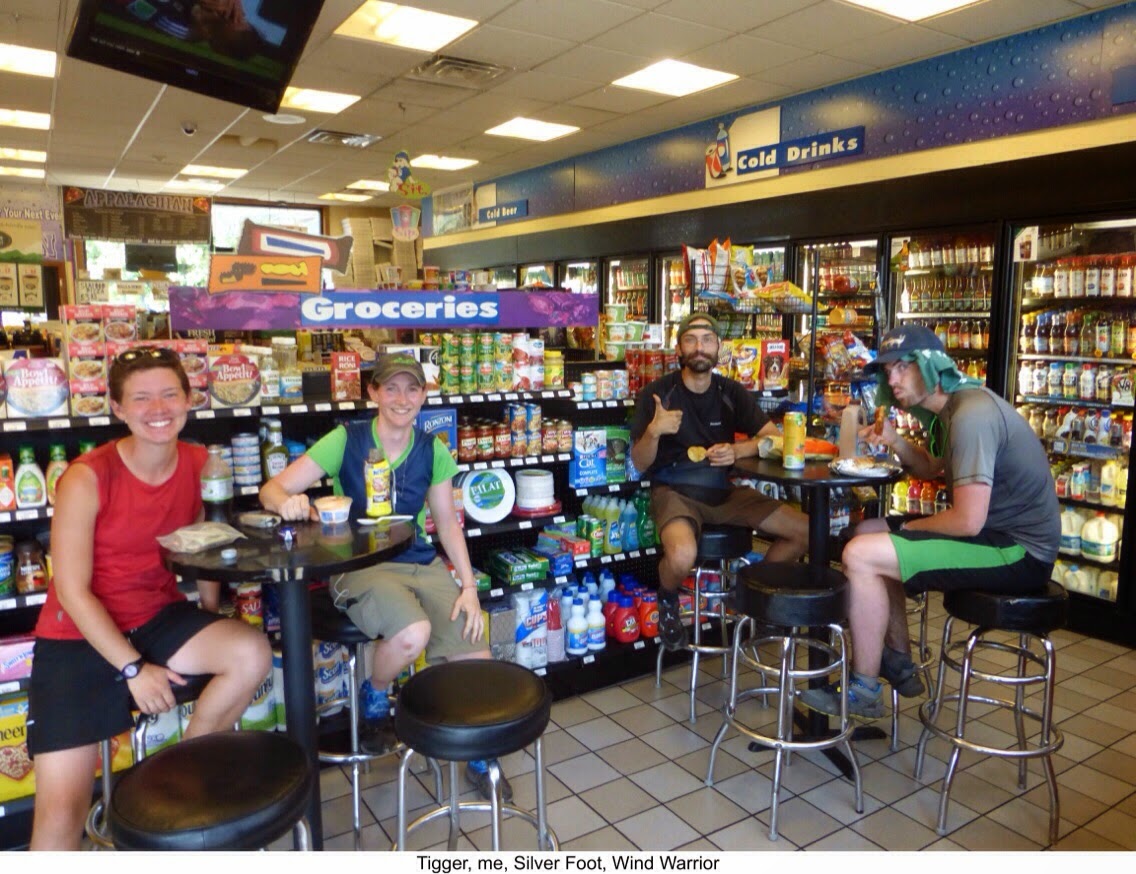 Everyone was either stopping there to be picked up, getting off trail at the next road, or camping near there, so I hiked on solo. It was great to overlap one last time as I doubt I’ll see any of them again. The trail was much smoother today and very enjoyable. 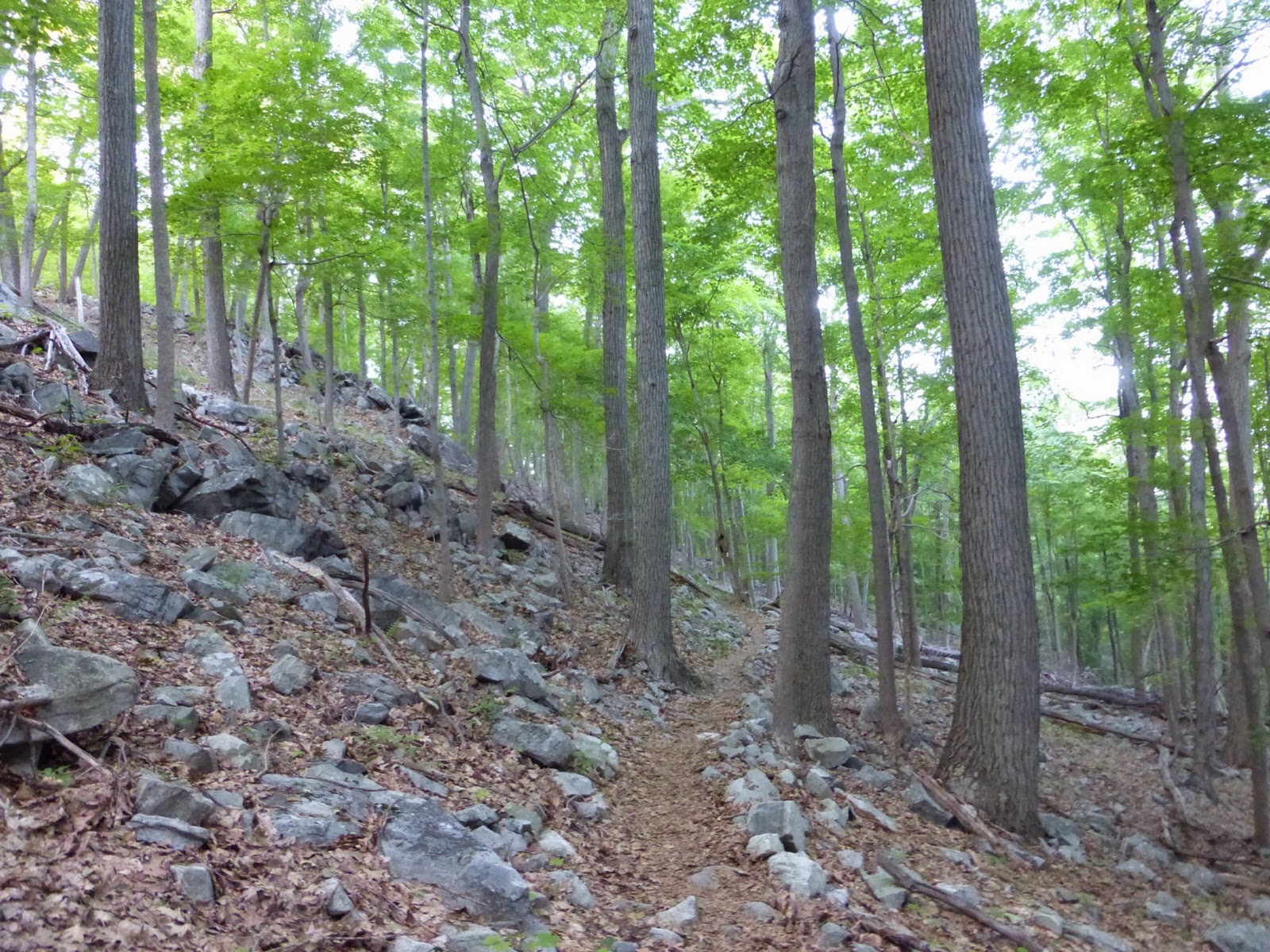 I planned to stop after a water source, but less than a mile before, I reached the top of Canopus Hill and was sooo relieved to feel a slight breeze. Then I noticed the horizon and gave it the 20sec mosquito test by standing still to see how quickly they swarmed. No mosquitoes! I was sold! I love it up here. I tried to remember the last sunset I watched and it was on day 40 when I accidentally camped illegally at the awesome viewpoint. It’s been a month! That’s just not right. It was great to watch the sunset through the trees and I’m now looking up at stars from my tent. My reward for letting go…a little. 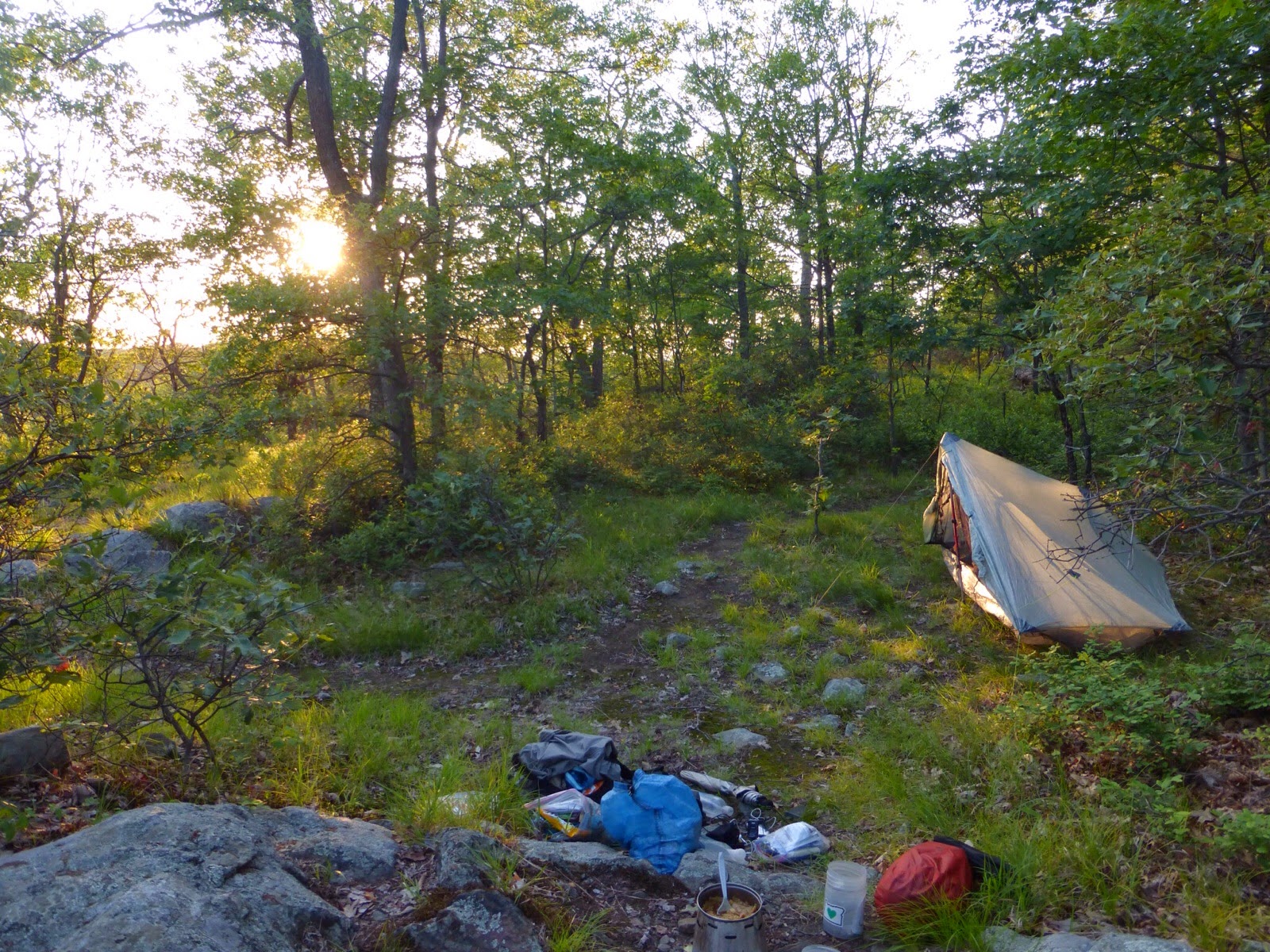