It rained pretty hard last night around midnight and that cooled things off just enough that I could lay my sleeping bag partially over me. I slept pretty well with the shirts around the sleeping pad so I didn’t stick to it. The rain seemed to end around 4am. Jett Cat likes to get early starts, so I heard her getting ready around 5:15am while I did my usual forced relaxation in the morning. Even though I’ve been waking up early, I don’t have a need to be hiking any earlier than 6:30am, so I’ve been lounging in the mornings a bit if I wake up earlier. Jett Cat left around 6:20am and I was about 10mins behind her. I tend to hike a bit faster, so I caught up in an hour or so. It was a foggy, wet, muggy morning, but there weren’t any mosquitoes, so that was nice. 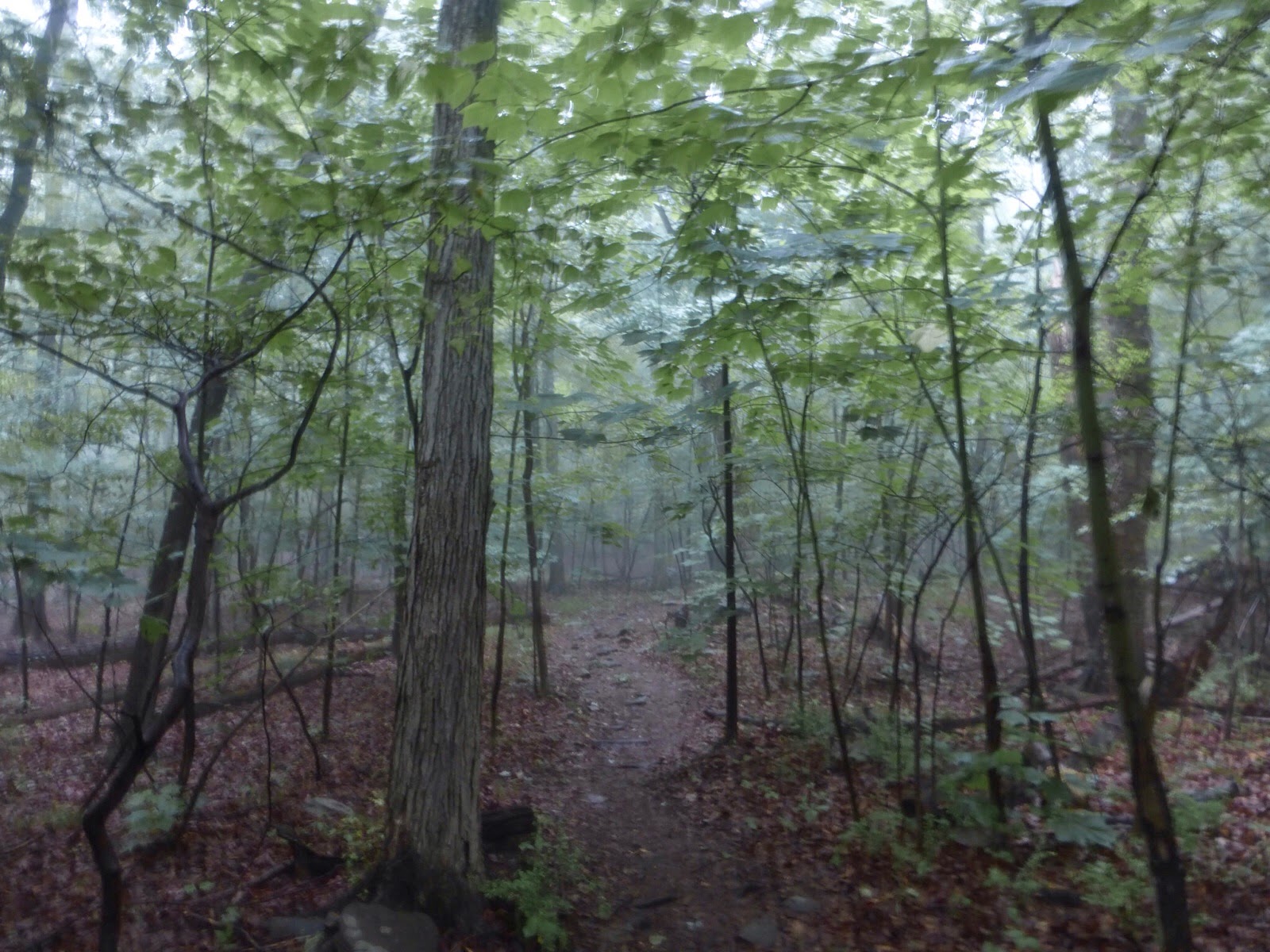 I immediately noticed all the little orange newt were out. They tend to freeze right in the middle of the trail rather than scurry away, so I was cautious of where I stepped. It was funny that there were so many this morning because Jett Cat mentioned that counting the newts on these types of mornings is one way she finds to pass the time and boredom some days. By the time I caught up to her, she had just broken her record for newts in a day and was already well over 70! By the end of the day, she had counted 102 newts. I had to take a picture of one next to Chapstick to give perspective of how small they tend to be. Yesterday there were tiny frogs in a section hopping everywhere and we are just happy we haven’t squished any of these little guys yet. 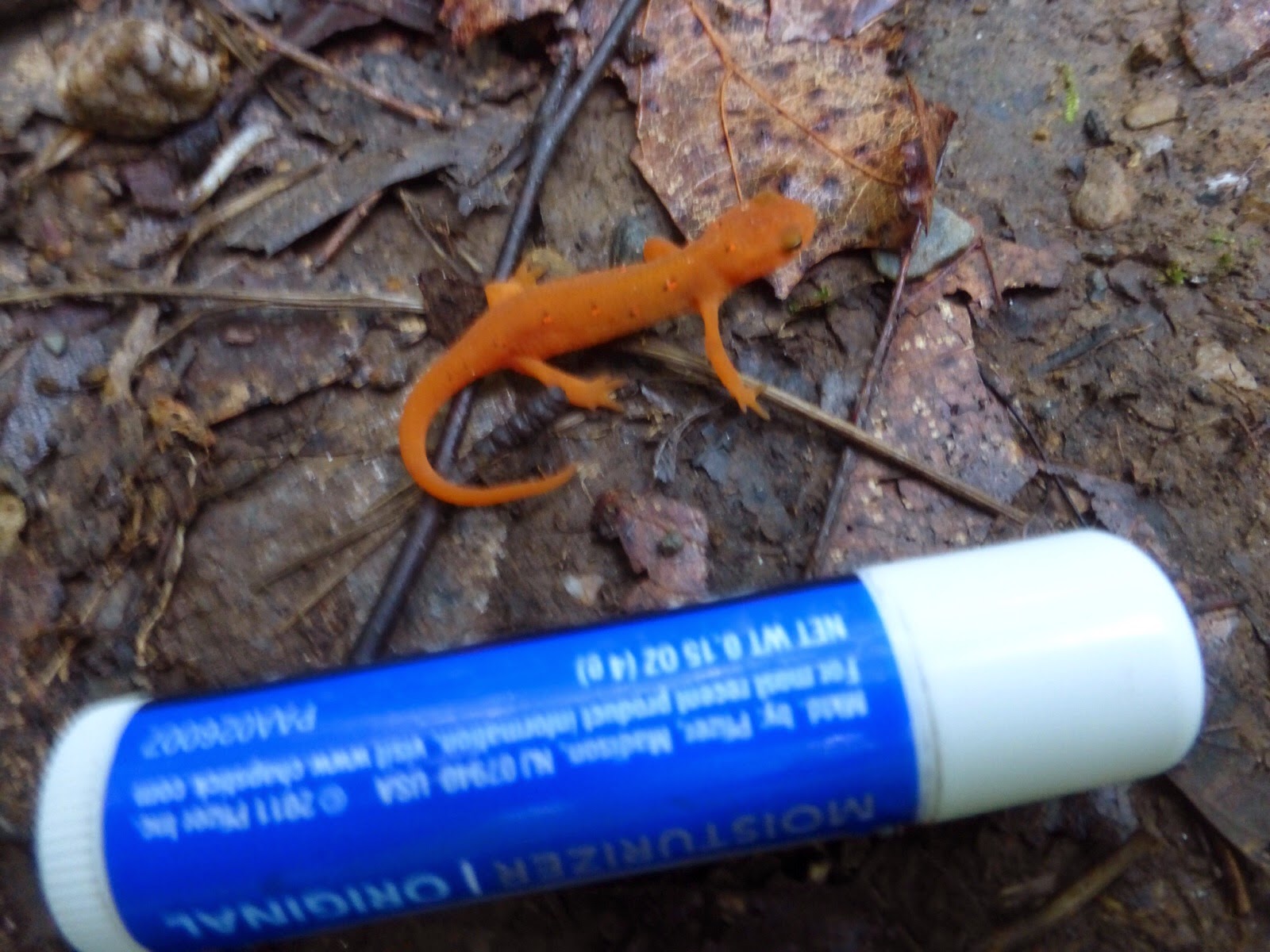 It was a nice change of pace to hike with Jett Cat and we both appreciated having someone to help pass the time in some fairly uneventful hiking. Just a lot of woods with few people, views, or changes in scenery. We did have a few things we were excited about this morning. One was the Dover Oak, which is the largest on the AT. It is over 300yrs old and just over 20ft in circumference. It was a but sad to see that it had many limbs cut off, a bad toilet smell wafting nearby, and trash strewn around it with what must have been a lot trail magic left. 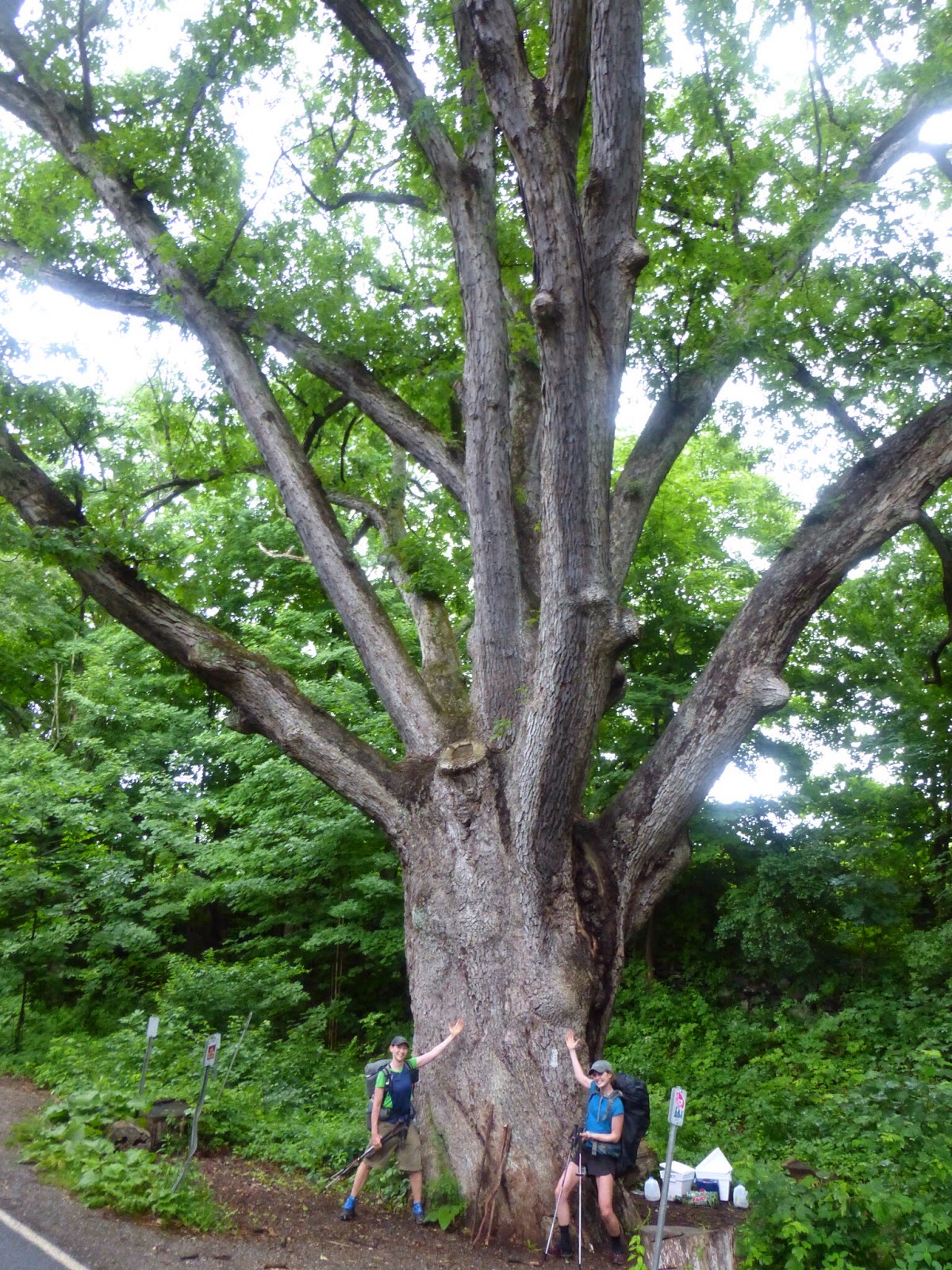 Soon after that was the Appalachian Trail train stop that arrives in downtown New York City in two hours. It was fun to see. 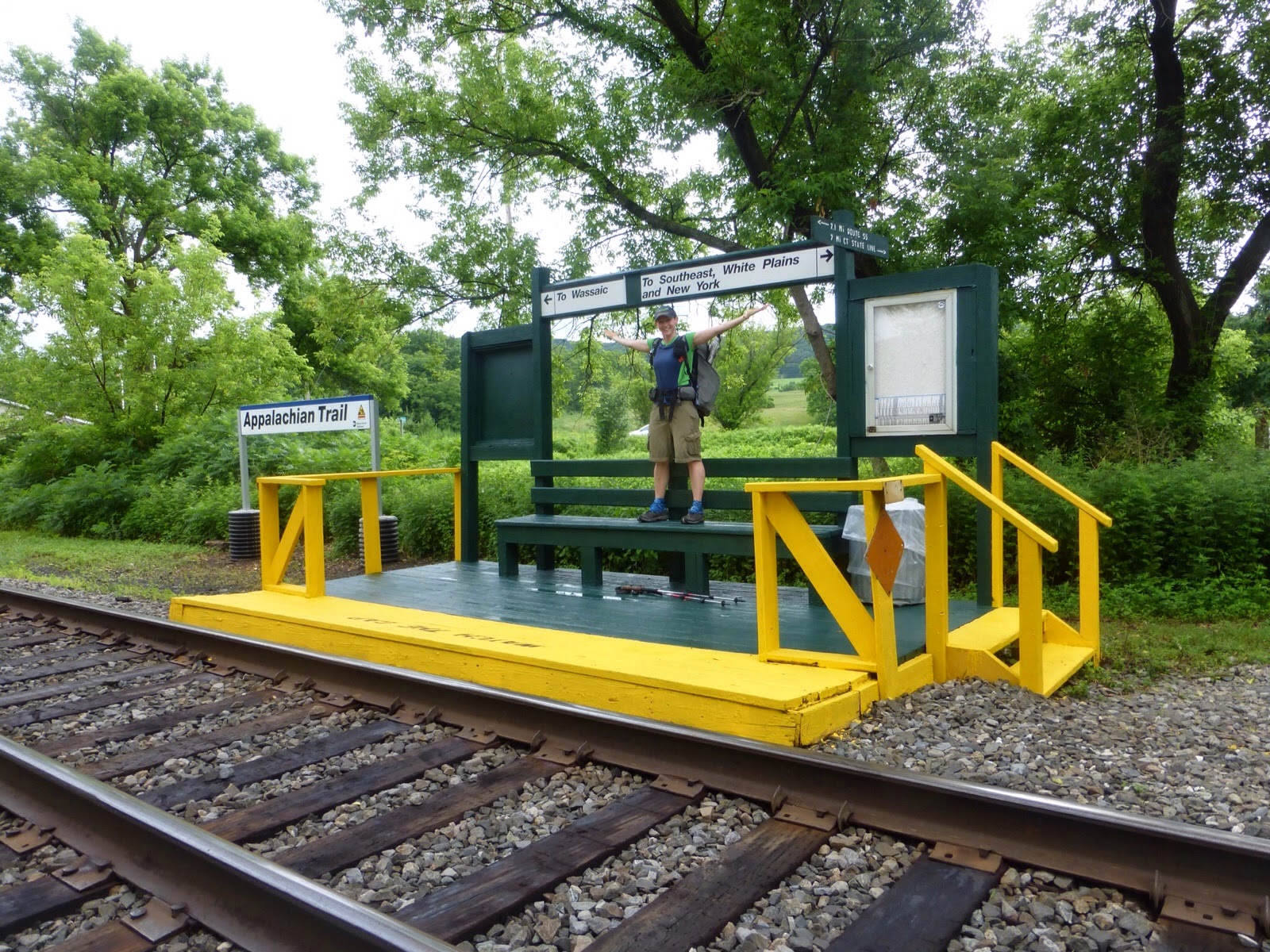 Lastly, we had the New York/Connecticut border! It was a road crossing with no official signage, so we made one for everyone to enjoy. While there, a section hiker named Sherlock who we had just met at a shelter walked up. When we saw him at the shelter, he had a nice big deli sandwich from town laying out and we jokingly told him that he can’t do that around thru hikers and expect us to resist eating it. When he caught up to us at the border, he gave us the other half of his chicken parm sandwich to celebrate. Yay, we’re in Connecticut! 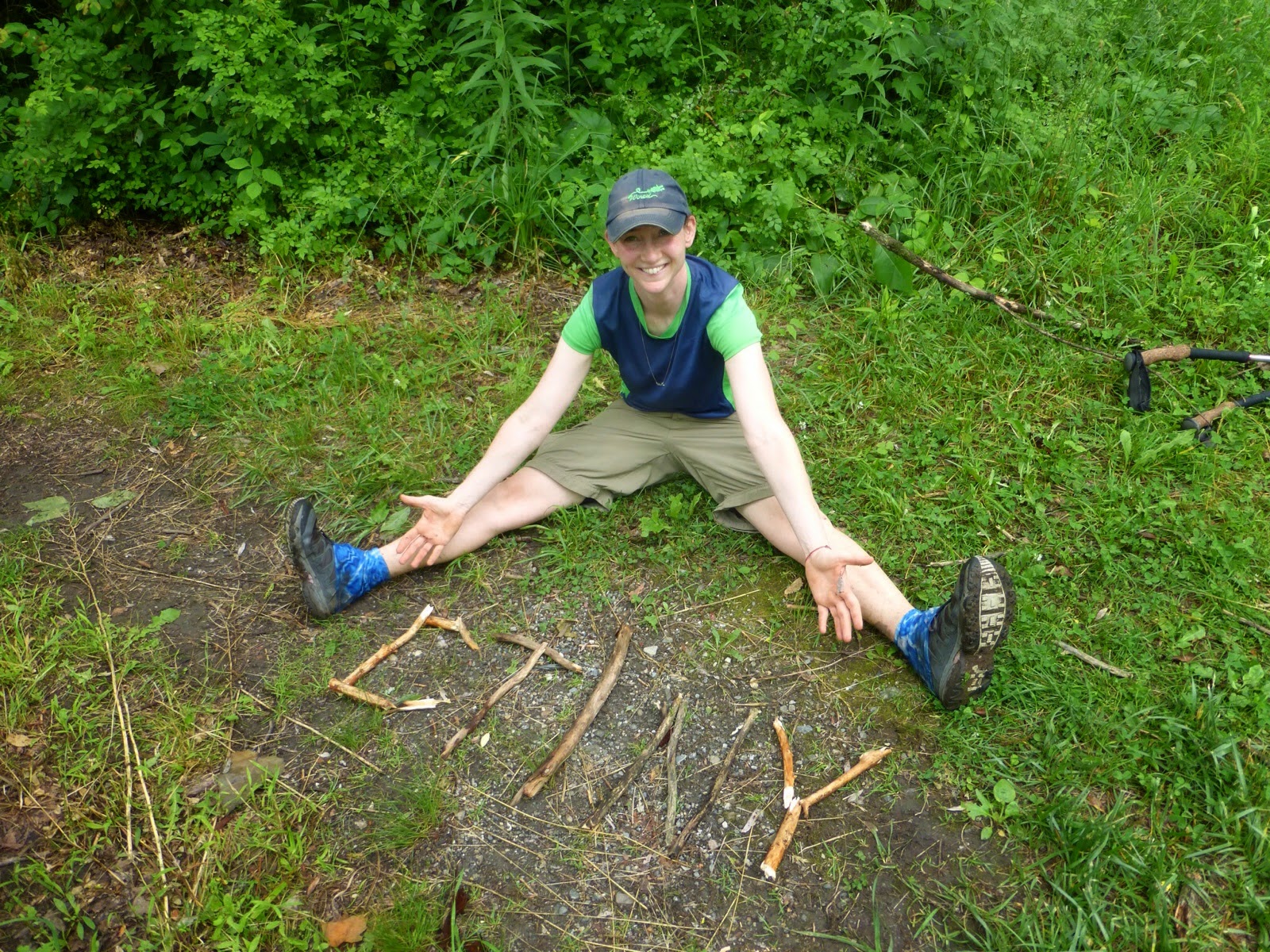 Not long after that, we were planning to stop for lunch and Sherlock’s hiking partner overlapped with us. His name was Circuit Surfer and he told that he and Sherlock had thru hiked the AT 8 and 9 times before. They were getting off at the next road and Circuit Surfer told us about a good lunch spot just ahead. When we got there, he gave us his whole Philadelphia Cheesesteak sub! It was just great! We sat along the Ten Mile River for lunch and it was splendid! 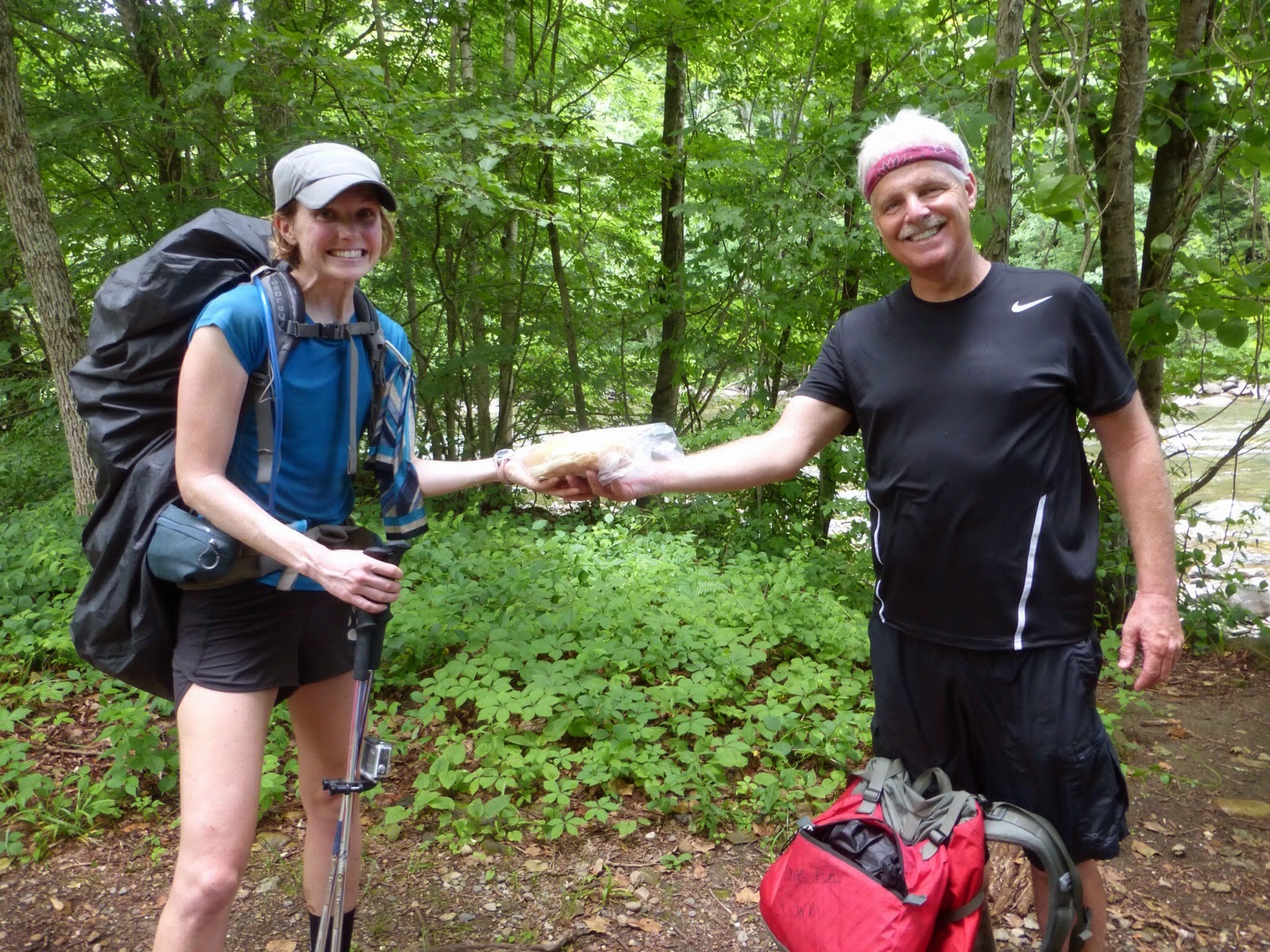 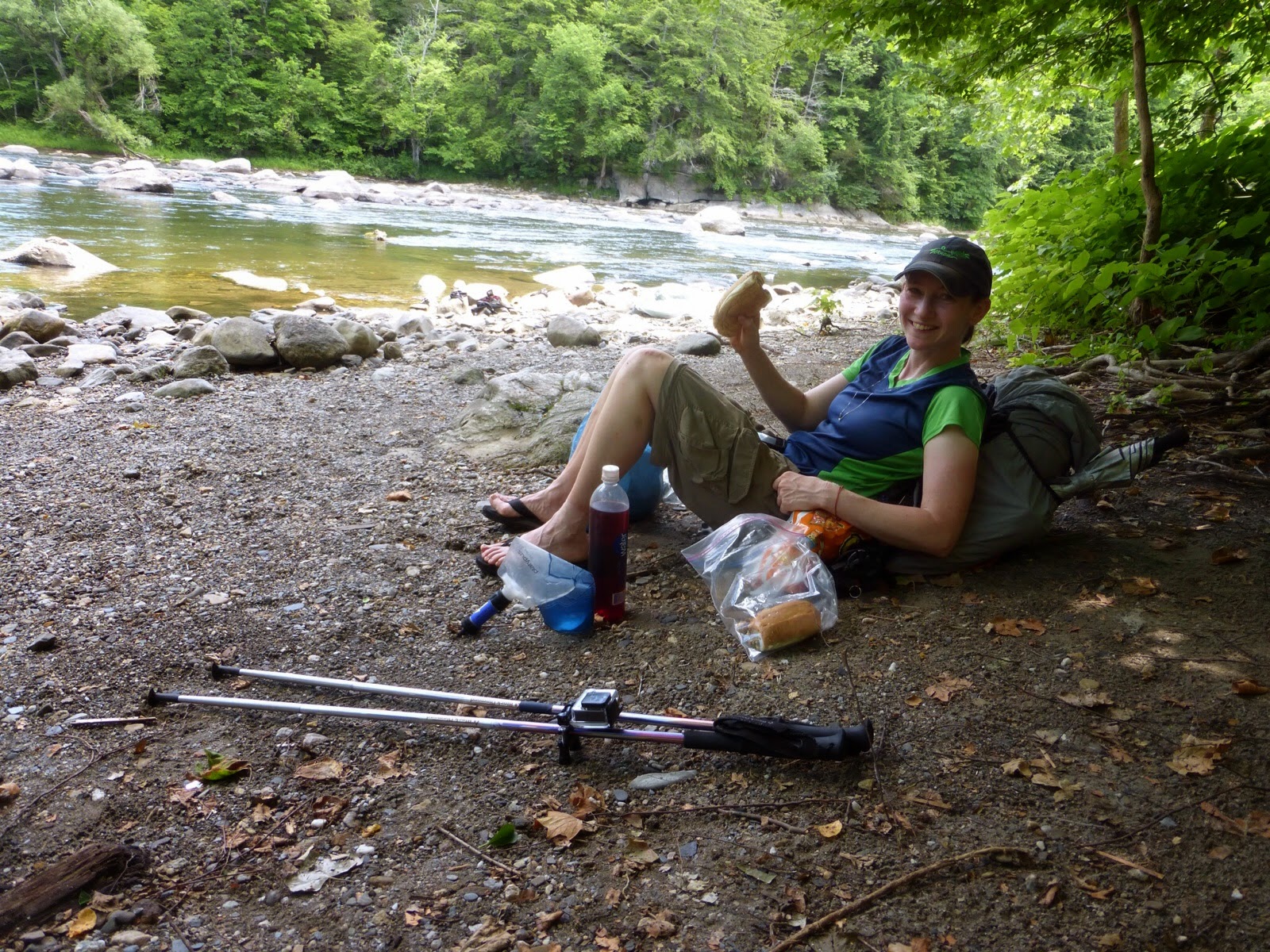 Little else happened the rest if the day. We did see just one other thru hiker who I probably won’t see again. He was German and a very nice man. Both he and Jett Cat started the same day(April 5th) and yesterday was their first time crossing paths. There were some sweat inducing small sometimes rocky climbs and we were soaked, but there was a light breeze today that made all the difference. Then the humidity dropped significantly in the late afternoon and we were quite relieved! 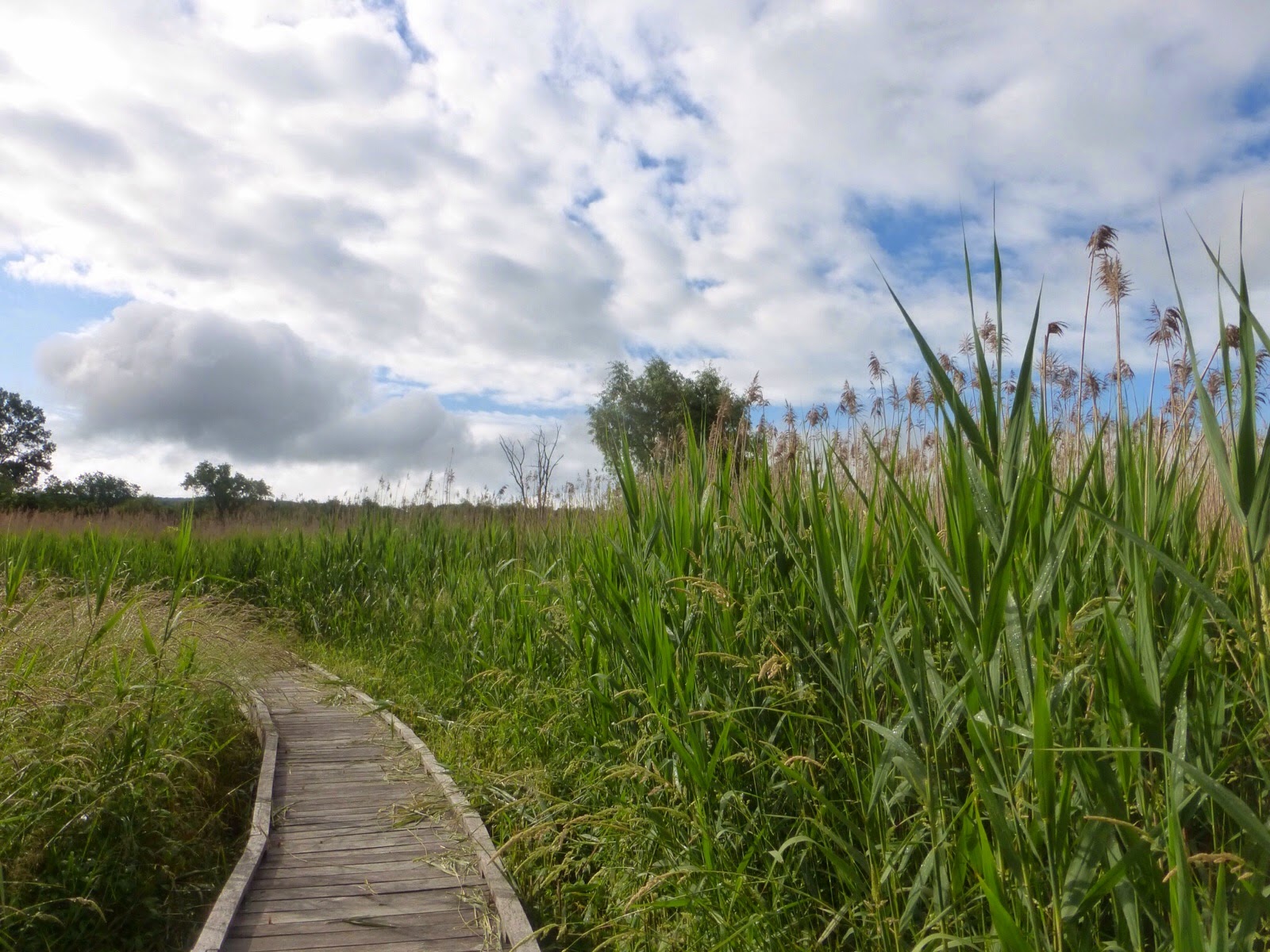 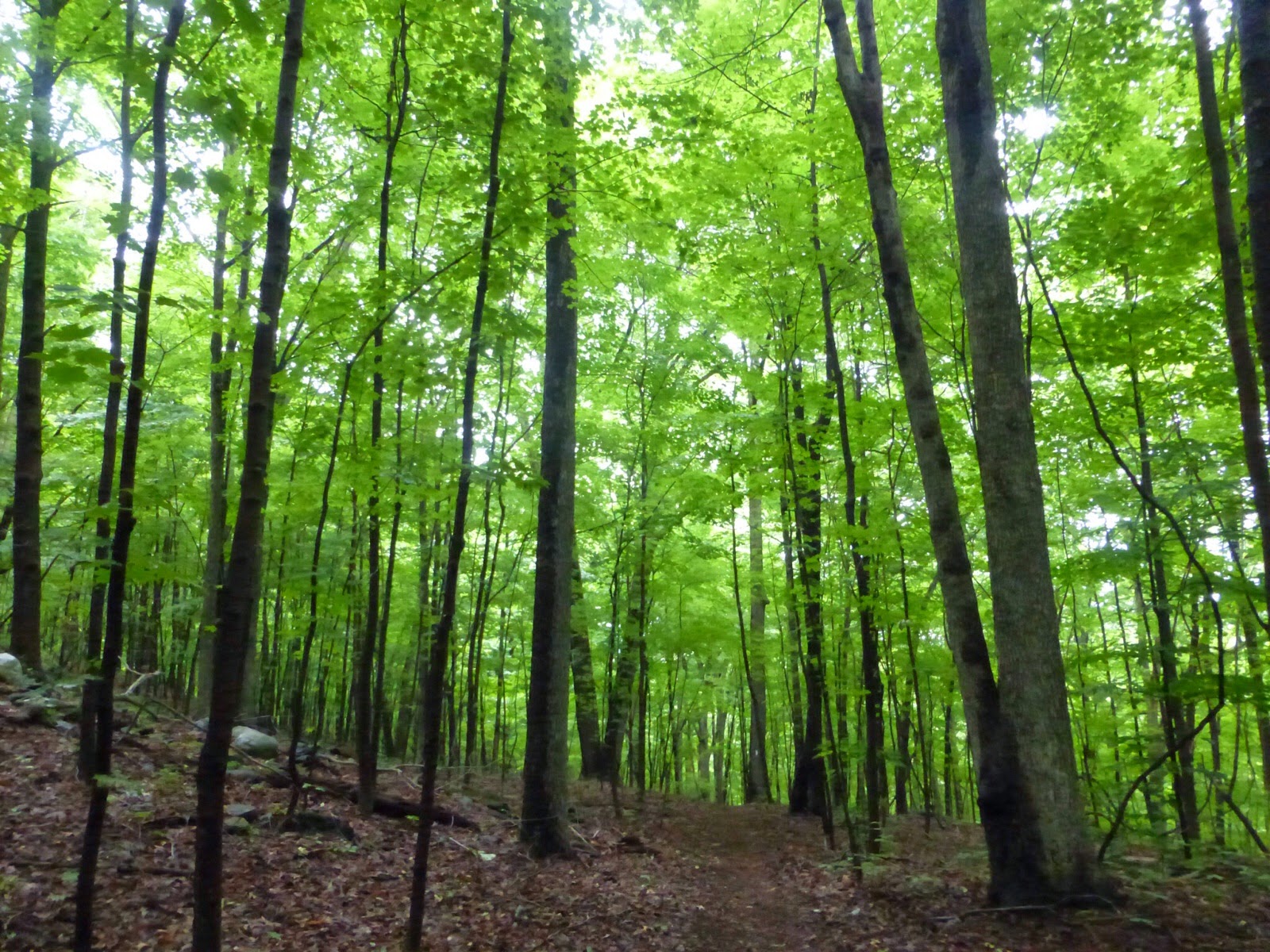 It was nice to have a compatible hiker like Jett Cat who enjoys endurance activities. Her favorite is 12 and 24hr cross country mountain bike races. She has great endurance and that was motivating to be around. At 5pm, she had to go into town to resupply and hoped to make it out and back swiftly, but ended up needing to spend the night to get some things done that she didn’t expect. We may cross paths again up trail and she may try to catch up if she’s able to get out early, but chances are slim. It was fun to overlap these last two days though. I ended up hiking til 6:30pm and found a flat spot well off trail after a water source. 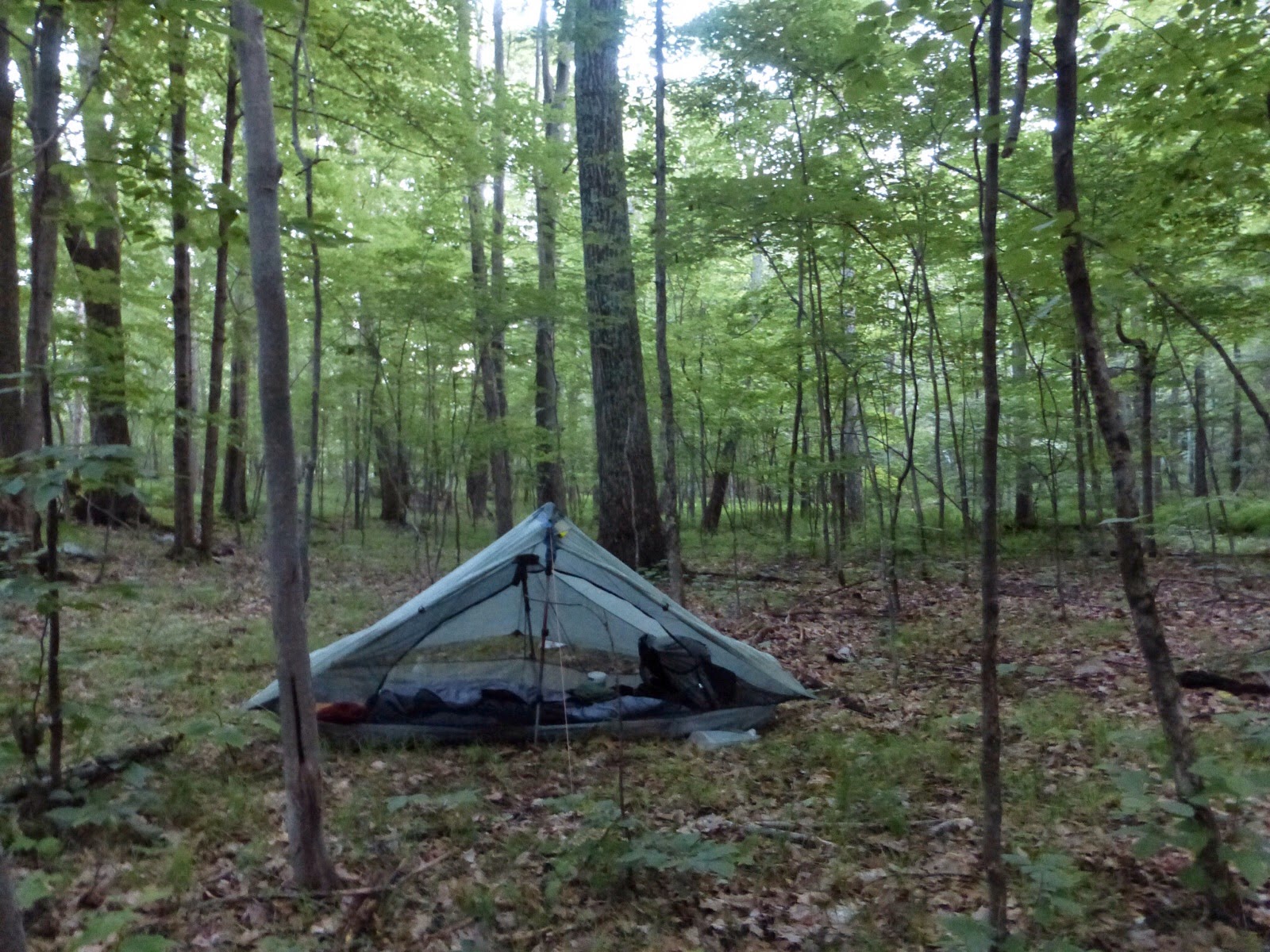 It is much cooler and less humid tonight and I’m dozing off as I write this so I’m looking forward to a good night of sleep hopefully.