I need to sleep near streams more often! I didn’t wake up until 5:45am as the stream drowned out the early morning bird songs. I started hiking at 6:45am and was excited to get to town as I had a nice hotel and air conditioning waiting for me. I had 20mi to do and figured it would be an easy day into town…I was wrong. The day started off very eventful. In the first few miles, I reached mile 1,500. No one had made a marker yet, so I made one since I have appreciated it when others have done it ahead of me. 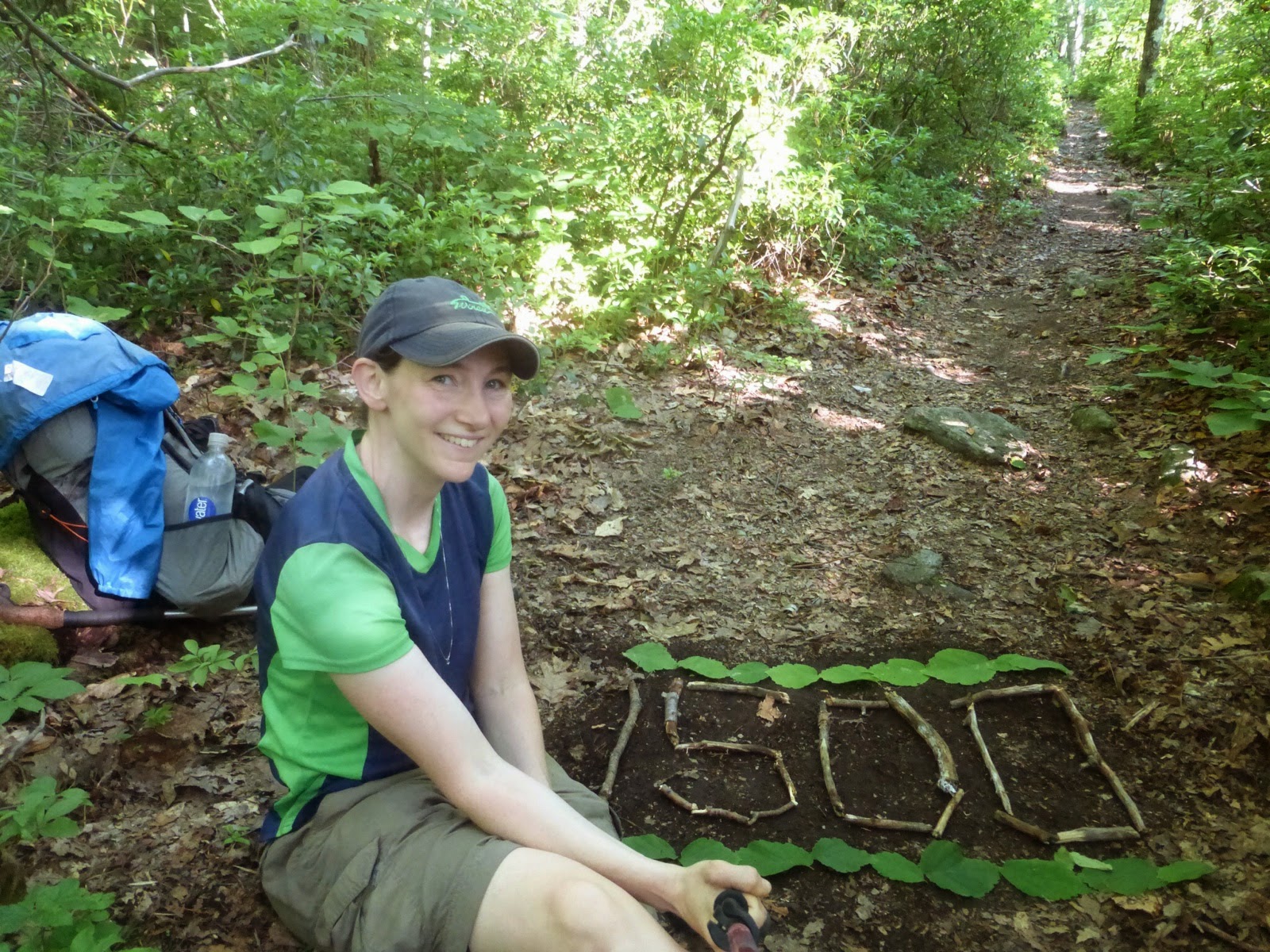 Then I reached the highest point in Connecticut at a whopping 2,354ft, ha! It was still early so I got a nice shadow shot on the rock. Little did I know that this was the rock I’d be seeing for most of the day. No one was around so I was proud that I was able to take a delayed shot of myself on the top by pushing the camera button and then scurrying up to the top in 10 seconds on the first try. 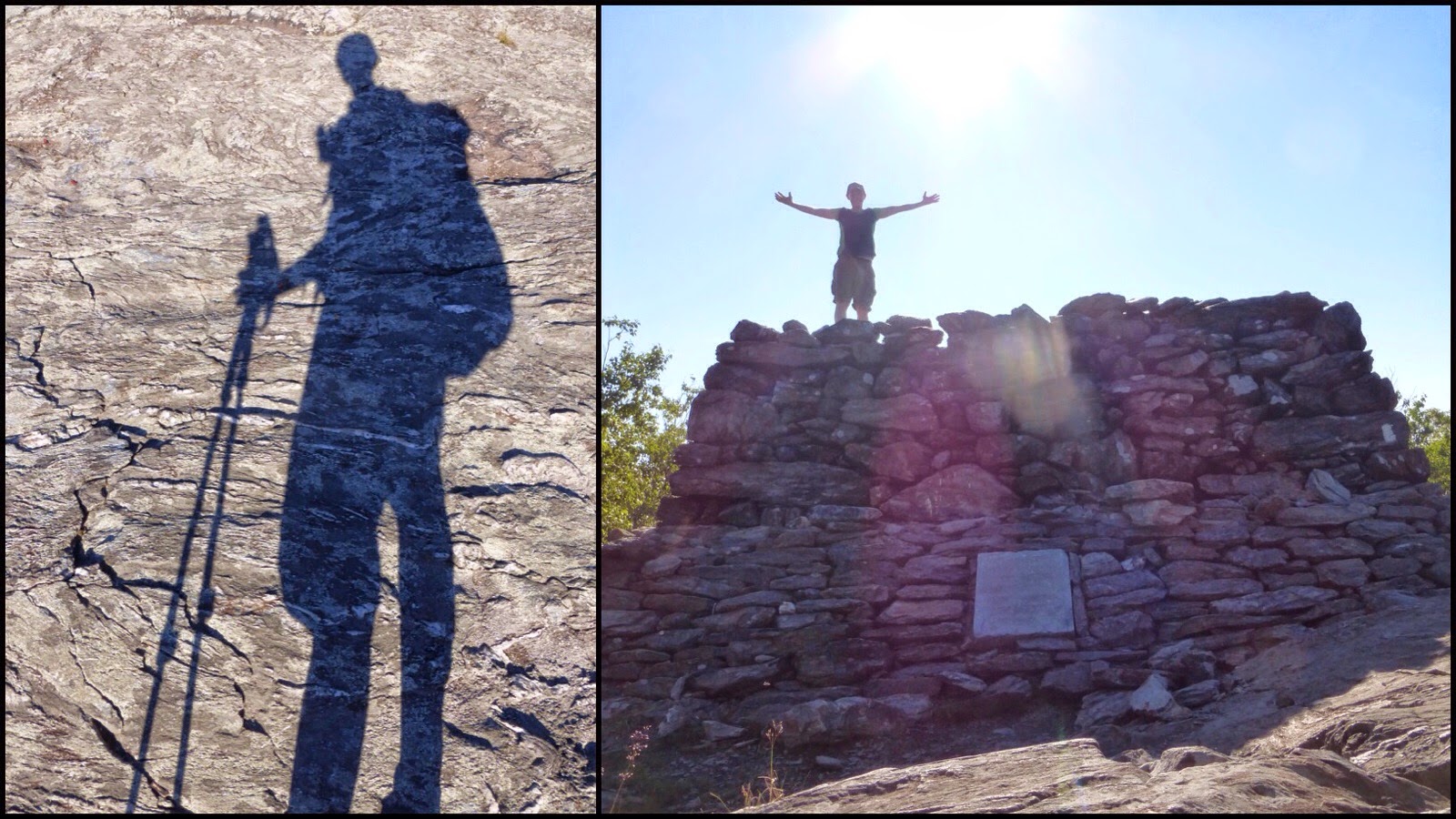 Here is the view from the top…

Then the trail dropped down STEEPLY. This was like a wall and it was quite frightening to go down something so steep on smooth rock like that. I have new shoes coming in a week and the tread on mine are pretty bald from all the rocks the last 400mi, so I was moving cautiously along the slanted rocks. It wasn’t like steps, it was more like slanted rock you just hoped your shoes gripped on to. I took a picture at the bottom, but it’s impossible to show the true steepness. Just notice how none of the rocks are flat on top to step on. It was very time consuming an jarring on the knees. There was much sitting involved and I have some sewing to do to my pack after scraping it along the rocks as I scooted a couple times. 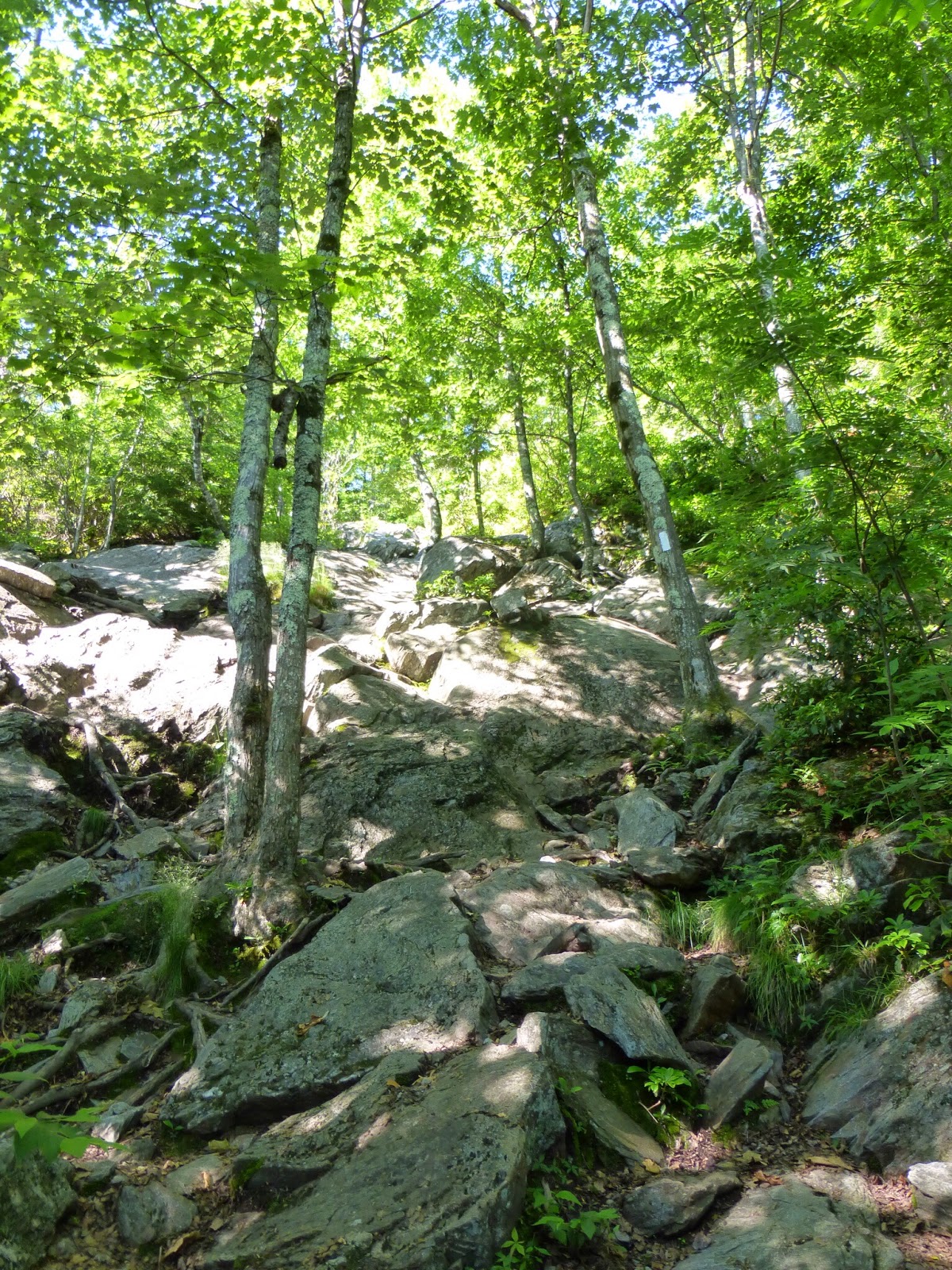 The trail then apparently tried to make up for that by entering one of my favorite stretches along the whole trail. For about 30mins, the trail goes through this area known as Sages Ravine. It was like a fairy tale enchanted forest with the smell of pine, the sun breaking through in small patches, and pine needles cushioning the trail. Pictures don’t do it justice, but it really was unreal. It must be popular because many signs were up asking people to stay on trail to help preserve this overused area. The trail ran along the stream and had many small swimming holes and waterfalls. It was perfectly cool and somehow free of bugs too. Just wonderful! 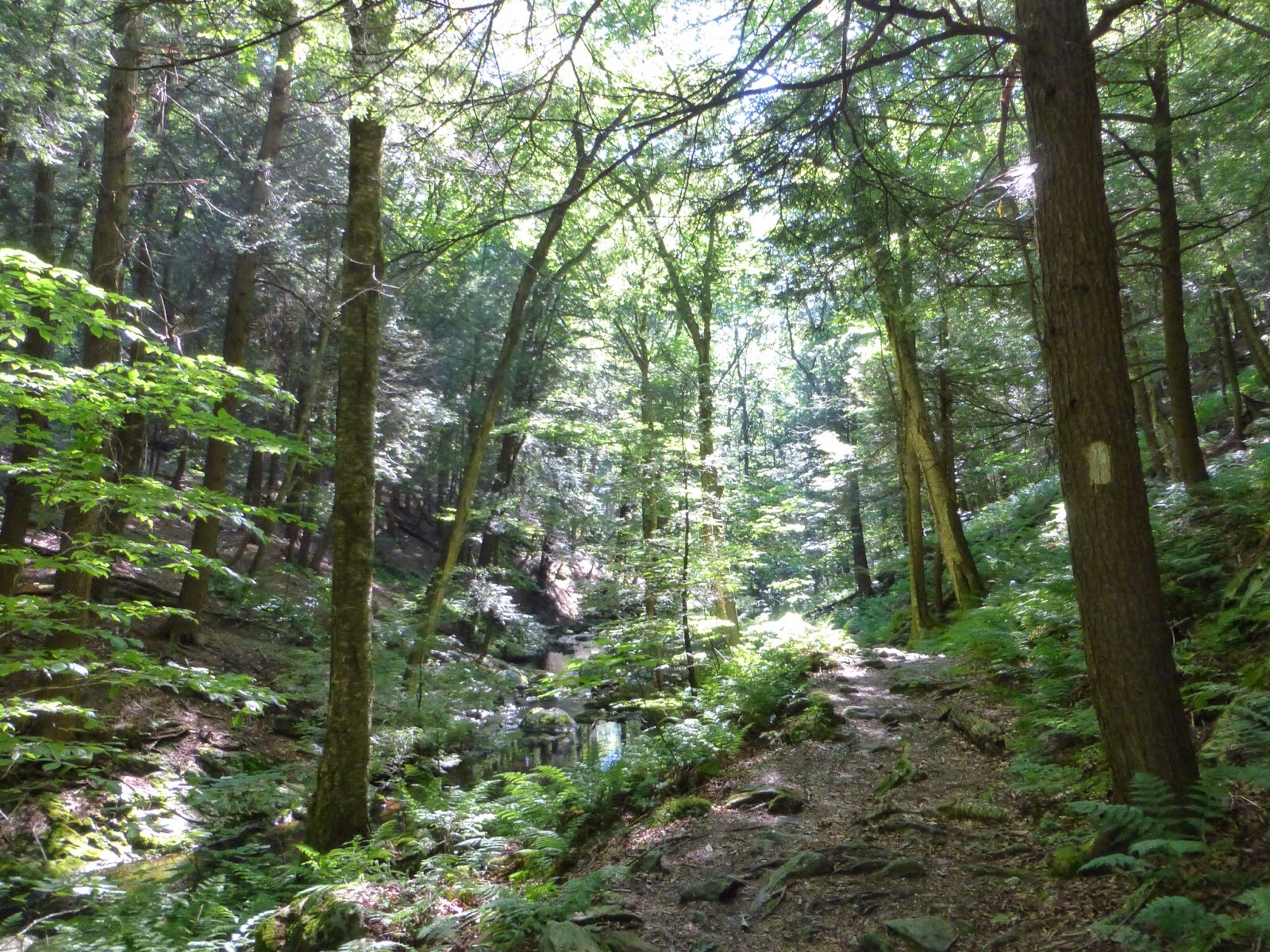 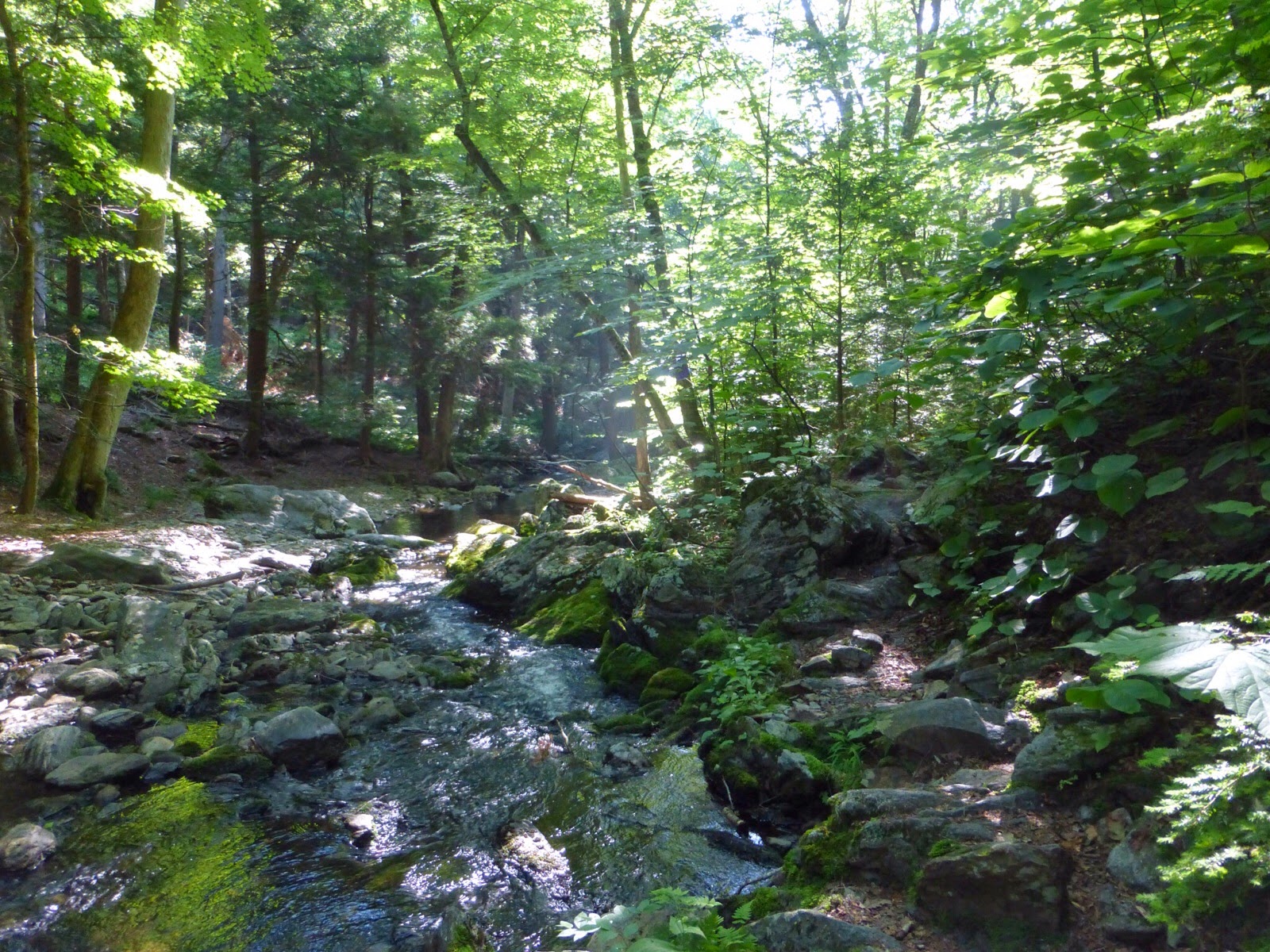 Then right after that section came the Massachusetts border. I luckily came across another hiker who had just started the AT five days ago and we took pictures for each other. It was pretty high up, but I was excited and found a way to get up there. There’s no welcome sign too high for this monkey! 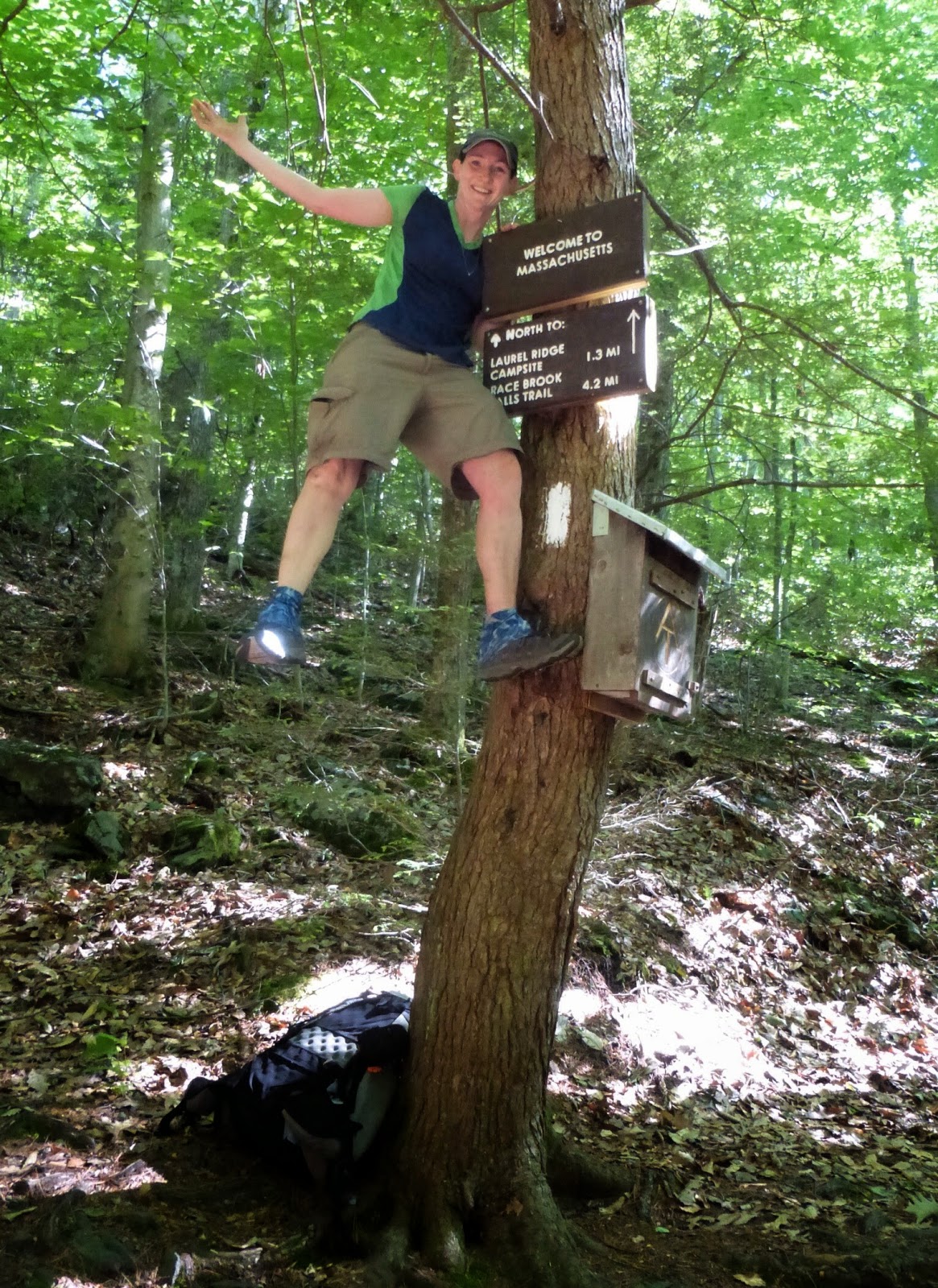 I had heard Massachusetts was going to be flat and buggy…but that isn’t so for the first 10mi of Massachusetts. The trail climbed up steeply and popped out to a rock ridge with sweeping views. The sun was intense off the rocks.

Then the real “fun” started. For the next 9mi the trail took steep ups and downs on smooth rocks that were sometimes covered in pine needles or dried leaves. It was very slow going and jarring. This was one of the ups that led to the top of Bear Mtn where there was no view and the foundation of an old fire tower. Oh yeah, in the process of this up, my shorts were soaked in sweat once more and I heard a rip in the inseam as they sagged and stuck to me…yep, more sewing will need to be done. 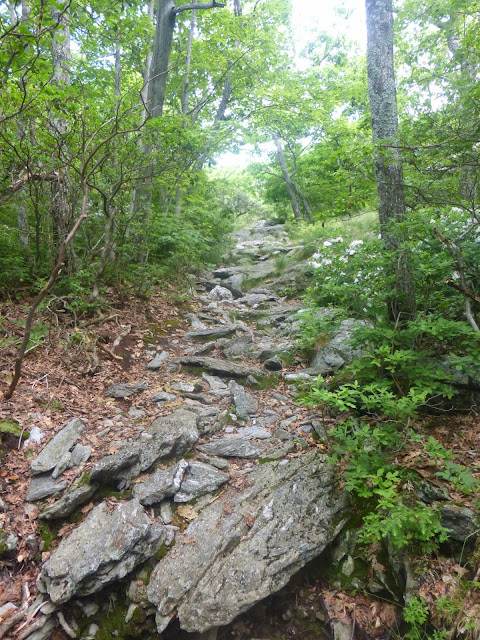 On the way down from Bear Mtn. A woman told me there was watermelon and water at the bottom at picnic tables. I was drained and super thirsty so I booked it super excited. When I got to the bottom, the woman with the watermelon told me that was her daughter (who is thinking of thru hiking) and husband I had spoken to and her daughter had actually brought the watermelon. I was so excited up top that I hadn’t even realized she was the one that left it. I had lunch there with some ice cold water that another woman maintains in coolers for hikers. I really needed that! They ended up returning to the picnic tables and we got a group shot of my trail angels with the watermelon. Thank you!

I made the mistake of sitting at the picnic tables with my knees bent that whole time. When I started hiking again, my knees hurt more than they ever have. They were not happy with these hours of jarring. There were still some downhill miles to go and it was still quite precarious with many close calls. One was just after taking this picture of a steep downhill on a smooth rock slab covered in pine needles. It was so steep and I wanted to just slide down on my butt…and I almost did by accident! So glad that is over. I call mercy Massachusetts! Enough is enough on the slick downhill rocks that scare the crap out of me and hurt my knees. 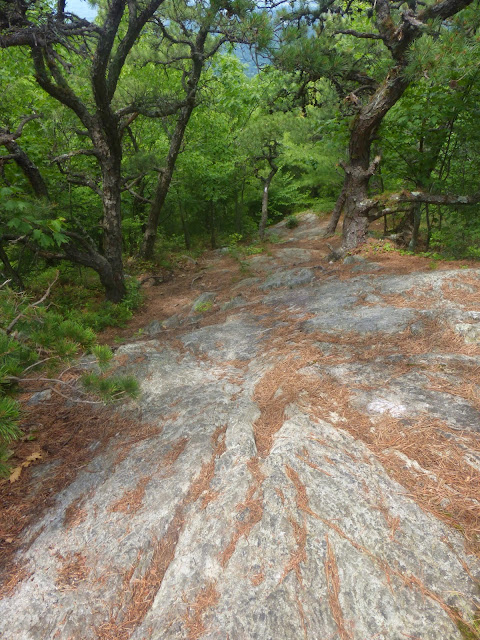 Thankfully, those ten miles ended with no injuries and I’m now in what should be the flat and buggy section of Massachusetts. I’ll take it! It was swampy, boggy, brushy, muggy down there. I did give in for the second time this hike and use the deet. It totally works so that’s good. 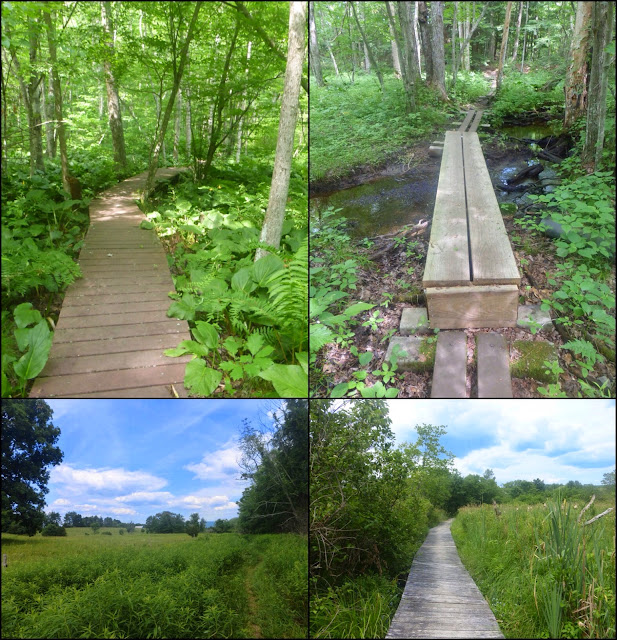 I made it to town just before 4pm and got a hitch quickly off the busy touristy road. In no time I was at the cafe near my diner with a wonderful milkshake! Tim, this is what you contributed toward and it was wonderful. Thank you!!! 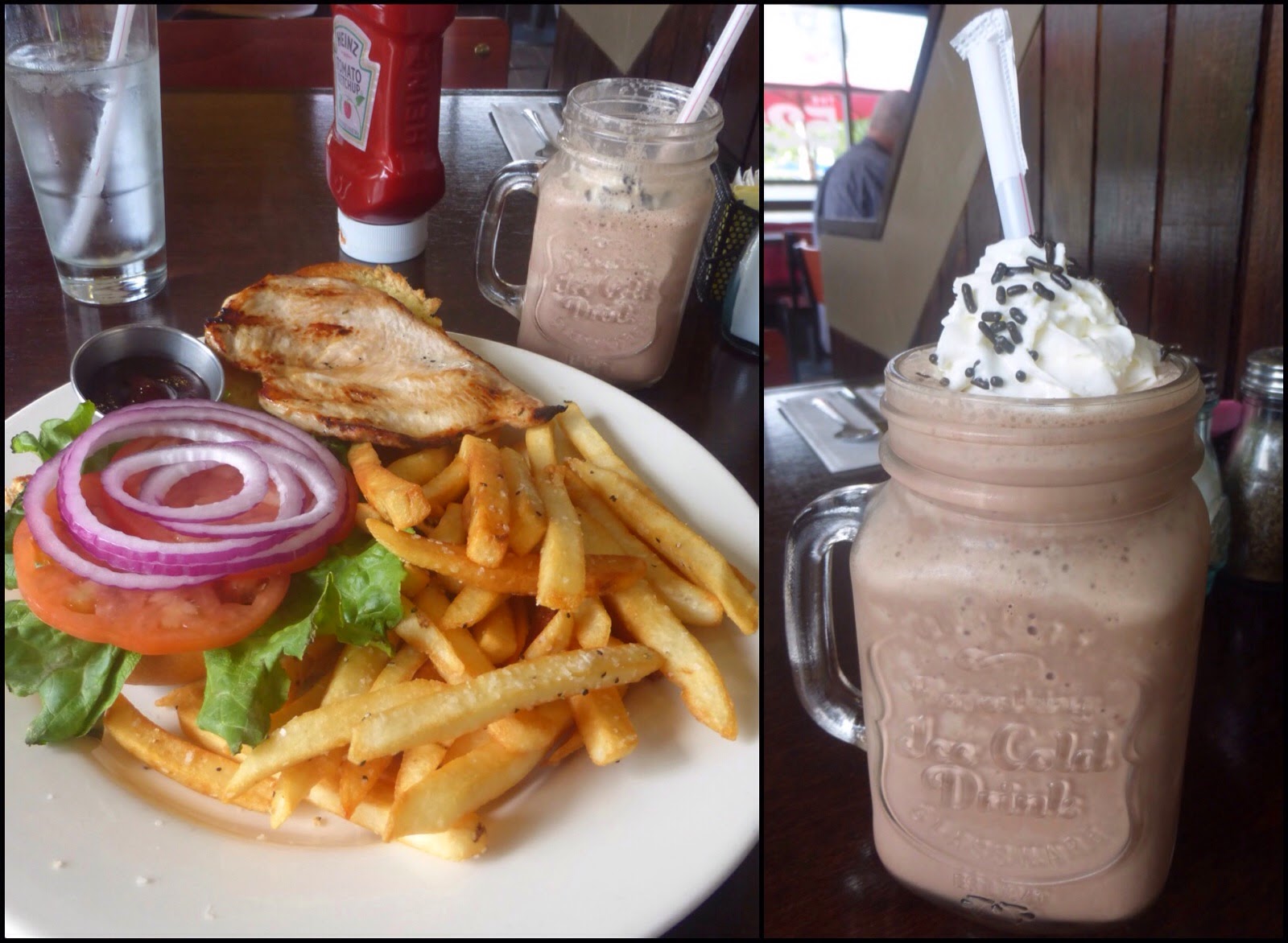 Finally, I got to my glorious hotel room. I got lucky this leg and a blog follower just happens to be a platinum premiere elite member of the Marriott hotel chains…and there is one in Great Barrington, so he hooked me up! Craig, you rock, THANK YOU!!! I am going to stay half the day tomorrow to really relax and take it in before starting a longer leg. I took these photos as I waited for my laundry to be finished so that explains the outfit. I’m off to work on my quart of chocolate milk and watch some OITNB. Quite a day! 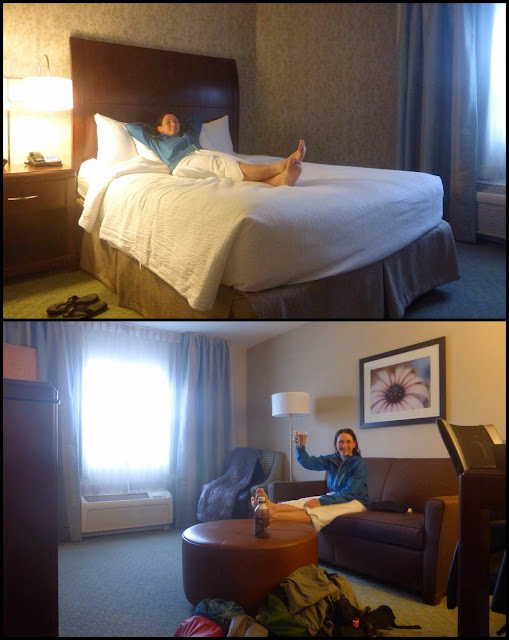