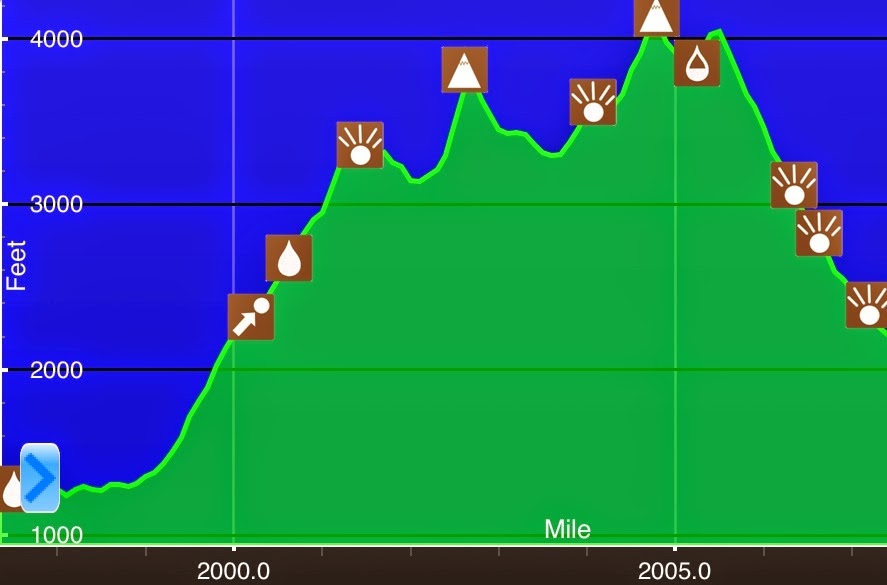 Despite being in a hotel, we were both awake at 5:30am. Squatch was staying in the room next to us and had his big 27″ Mac computer with him for the film editing. He said I could use it before we all went to breakfast, so I lounged and waiting for Squatch to let me know he was up. Jett Cat had her first breakfast and also lounged. Our plan was to relax and leave around noon or later to do about 10mi. Squatch called at 7am and I was able to get all my computer things done. It was wonderful and a relief to catch up on emails and blogging since there wasn’t another public computer I could use in town. It was heavenly and it was fun to see the blog on the big screen. Here I am hugging it. THANK YOU SQUATCH! 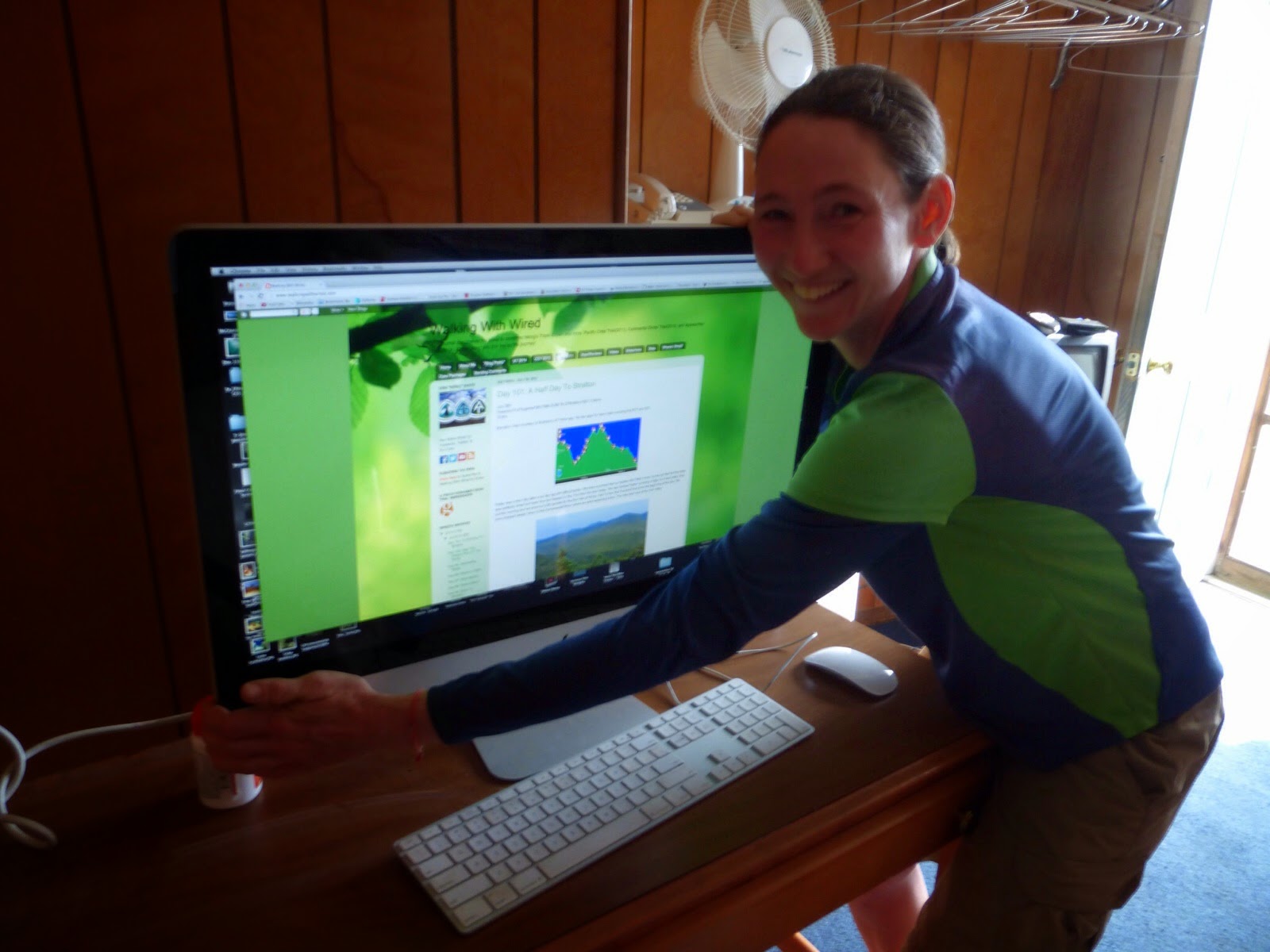 We had breakfast with Squatch and Mary Poppins, but I forgot to get a picture. The diner in Stratton was great! We ate there for breakfast, lunch, and dinner and all agreed it was pretty great. We found out rain was on the way, so we decided to leave earlier to get some dry miles in. Most of the gals we met yesterday had decided to slack pack. The motel will shuttle hikers 17mi north so they can hike back to the road to Stratton without carrying full packs over the last major climbs for awhile, the Bigalow Mtns. With the rain, many found that option appealing so that they could stay at the motel another night. As you can see from the elevation chart, the Bigelows was a lot of ups and downs today. Everyone is pretty excited because it’s really flat after the Bigelows and we can finally cruise again. We got started around 11:20am and soon hit the 2,000mi marker. Luckily, a section hiker was there to take a picture for us. 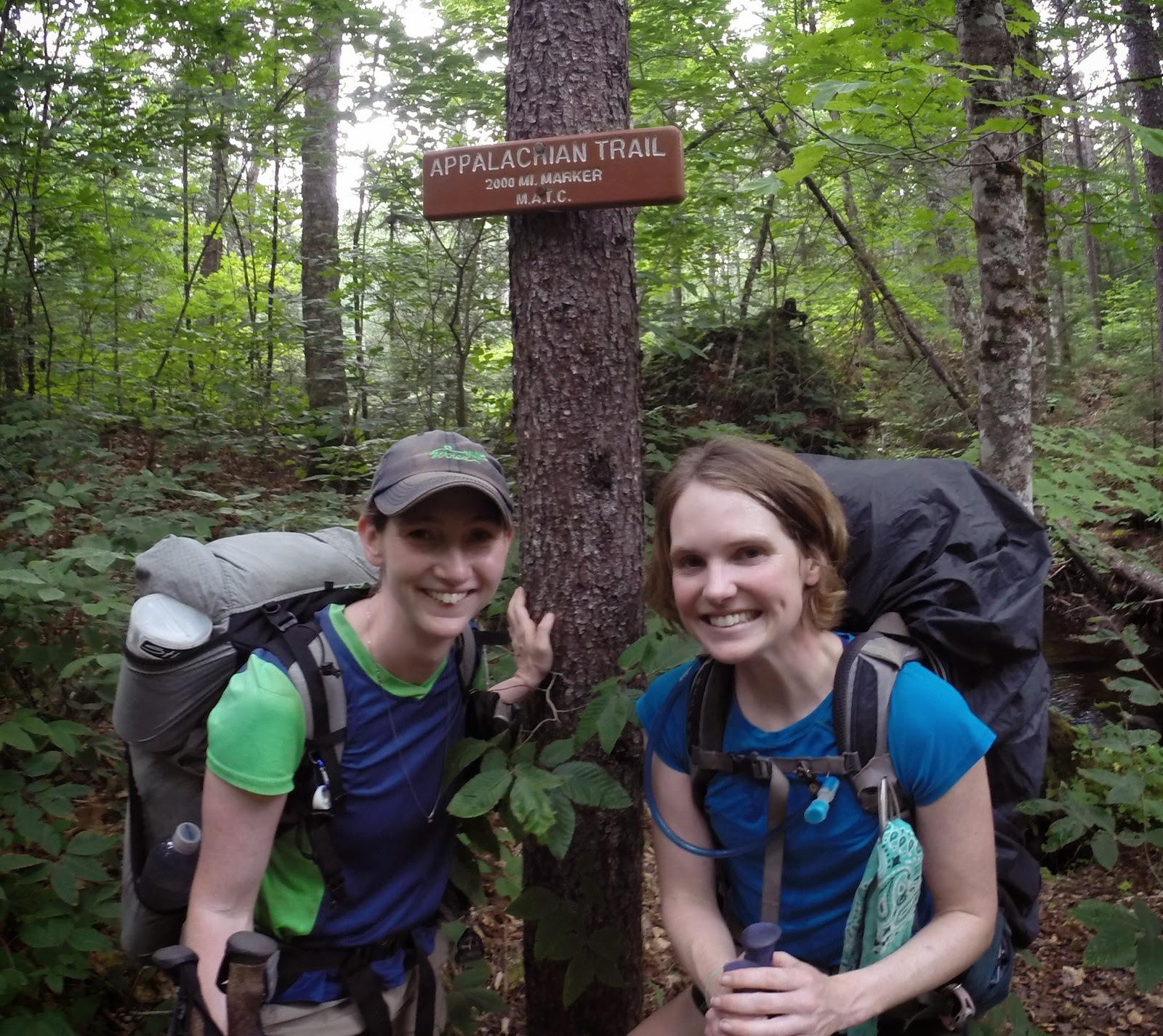 Soon after that, the sky got really dark and it started to rain. We were close to a lean-to and had plenty of time to get to our destination, so we booked it to the lean-to to sit out the rain. We made it just before the downpour started and were quite happy to make it just in time. Other hikers came in/out and we stayed for at least an hour until the rain stopped. 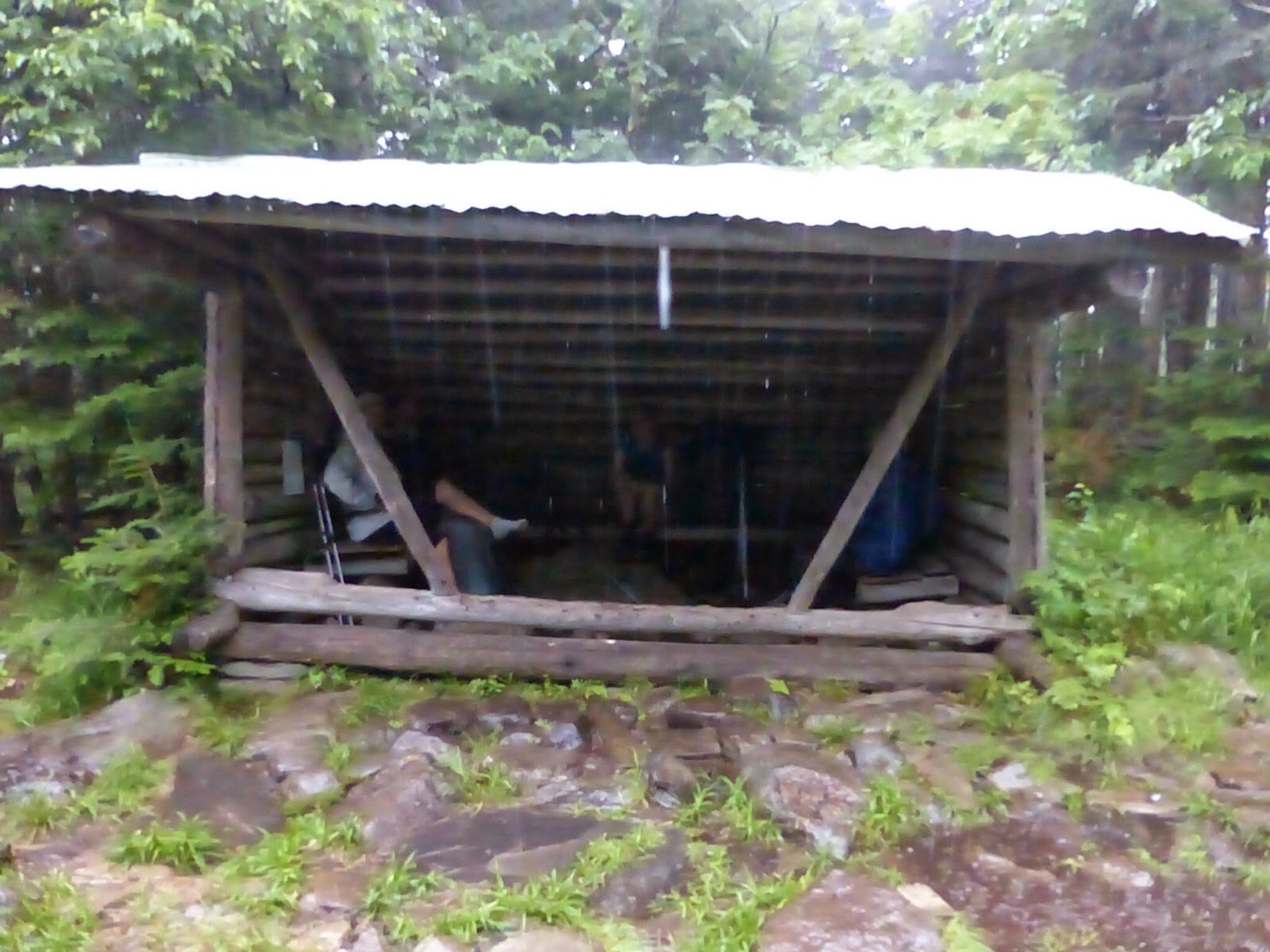 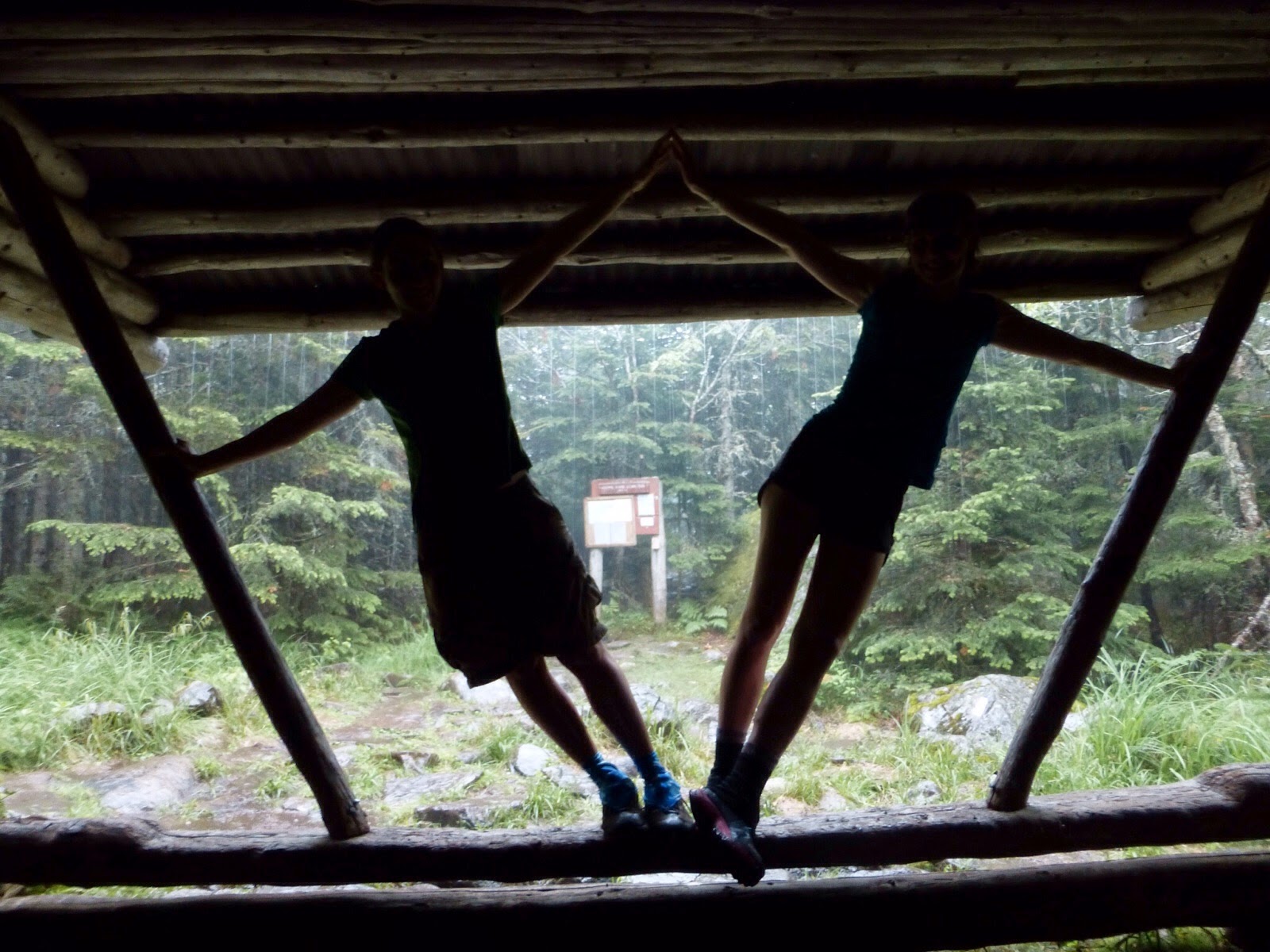 While we were there, so many hikers came by including many northbounders. There were tons of hikers and it was kinda overwhelming. We’ve finally broken into a bubble(as they call it on trail) in which most hikers have overlapped and leap frogged each other for months. With our more relaxed pace, we are actually keeping pace with the bubble and seeing people multiple times so it was new for both of us to know so many of the hikers and have seen them before. We saw Shakespeare and Ramshambo and it was fun to see them again. We also saw Grace who is a shelter caregiver that we chatted with at lunch a few days ago. Coincidentally, we saw her in town this morning and she was now at this shelter with a group doing trail work. Plus, we knew we were going to see the gals slack packing southbound. It was just fun for us to feel the community a bit since we both have moved up the trail in a way that we haven’t overlapped much with the same people for extended periods. We headed on north once the rain stopped and we were the only ones that timed it to not be soaked so we felt very lucky. We soon ran into the gals on top of a climb and it was fun to cheer them to the top seeing that they had been caught in the rain and probably needed a pick me up. Here they are atop a fogged in North Horn. 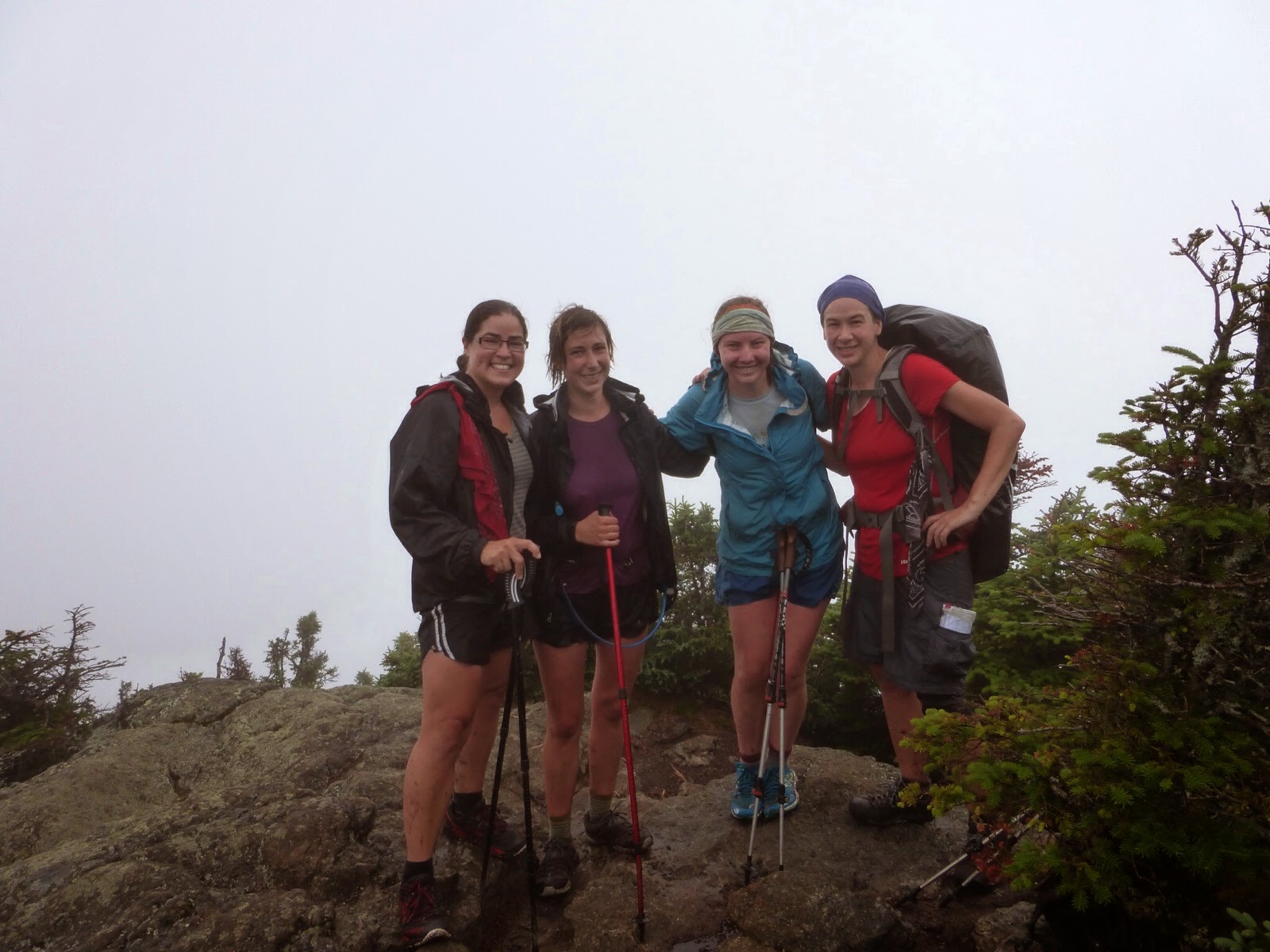 The next couple hours were dipping up and down along a ridge line and our timing was perfect once again. As we broke out of the trees, the fog would roll in and out making the views much grander. 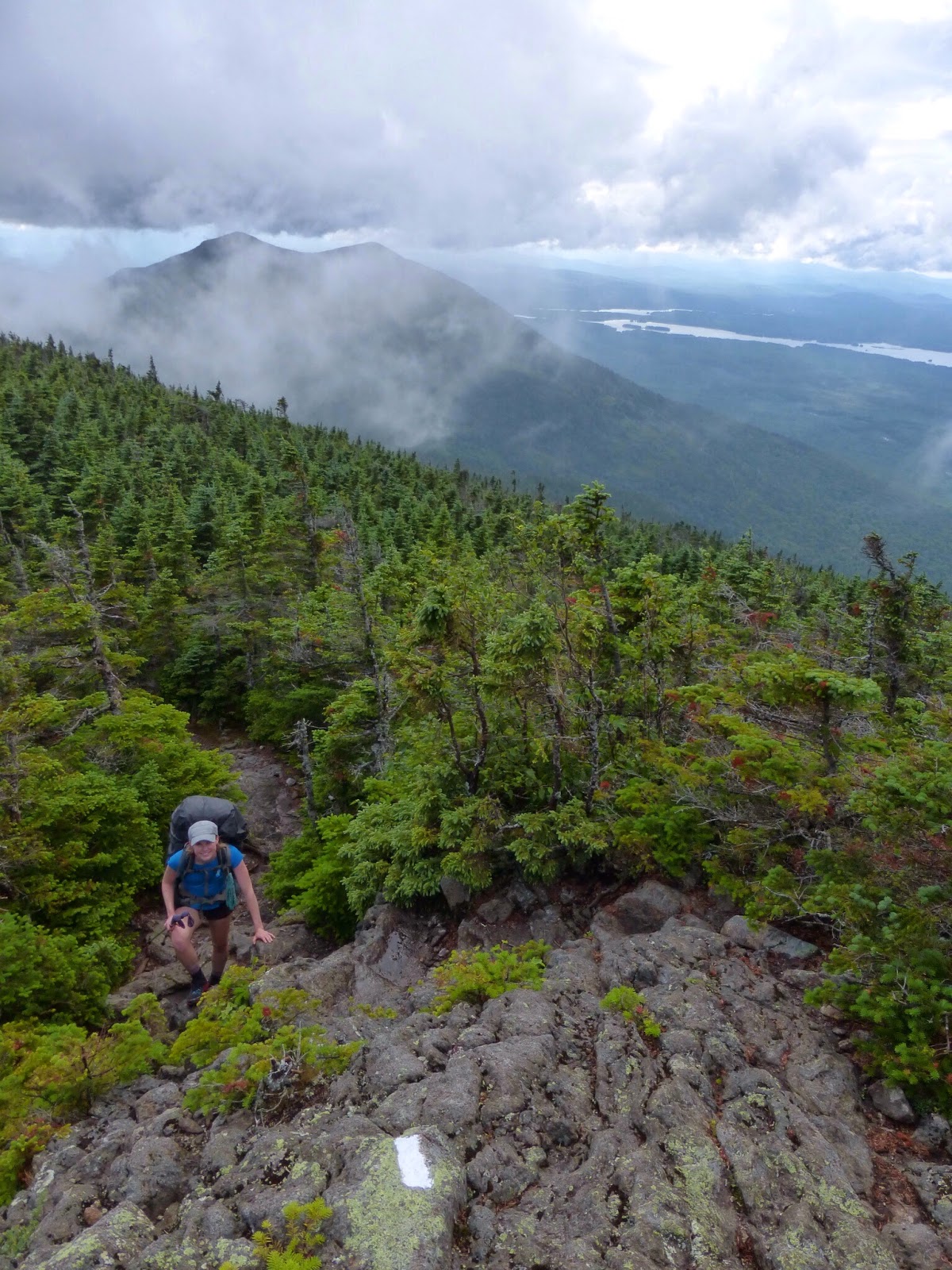 The forest in between the climbs was unique and quite dense. With plenty of moss and pine needles. 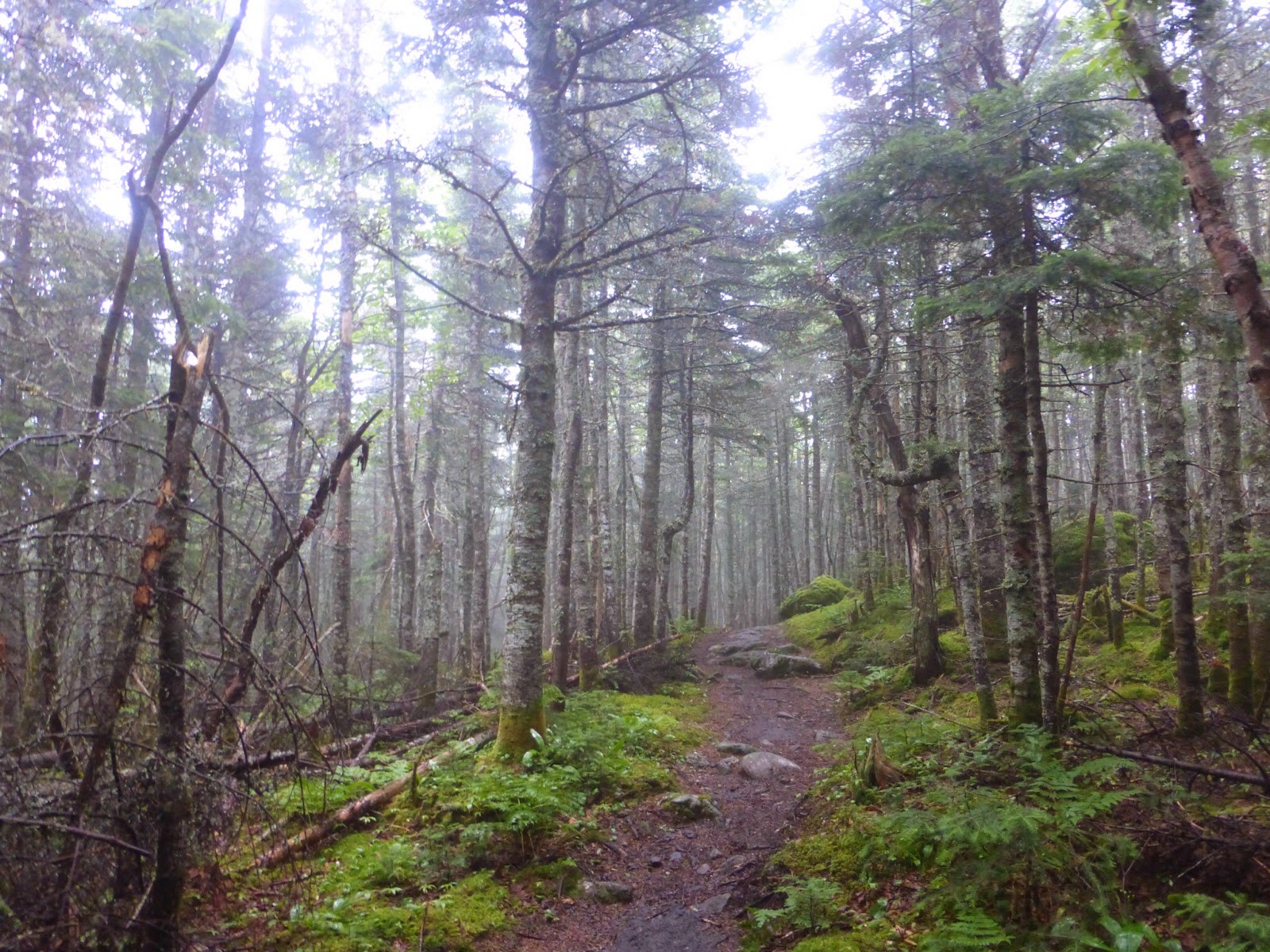 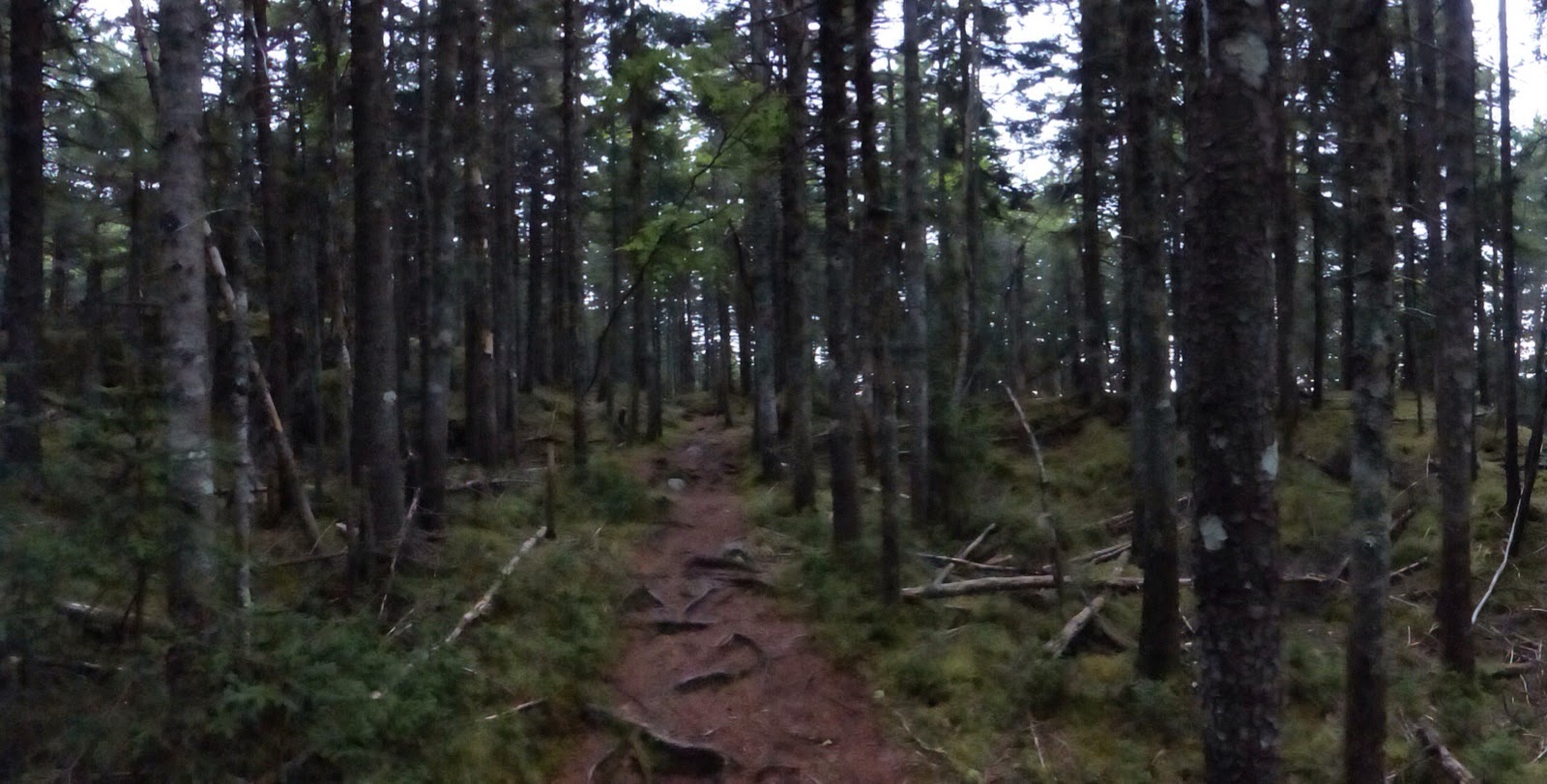 Our final peak for the day was fogged in and quite windy, but we were happy that no more rain came all day and we somehow dodged it! 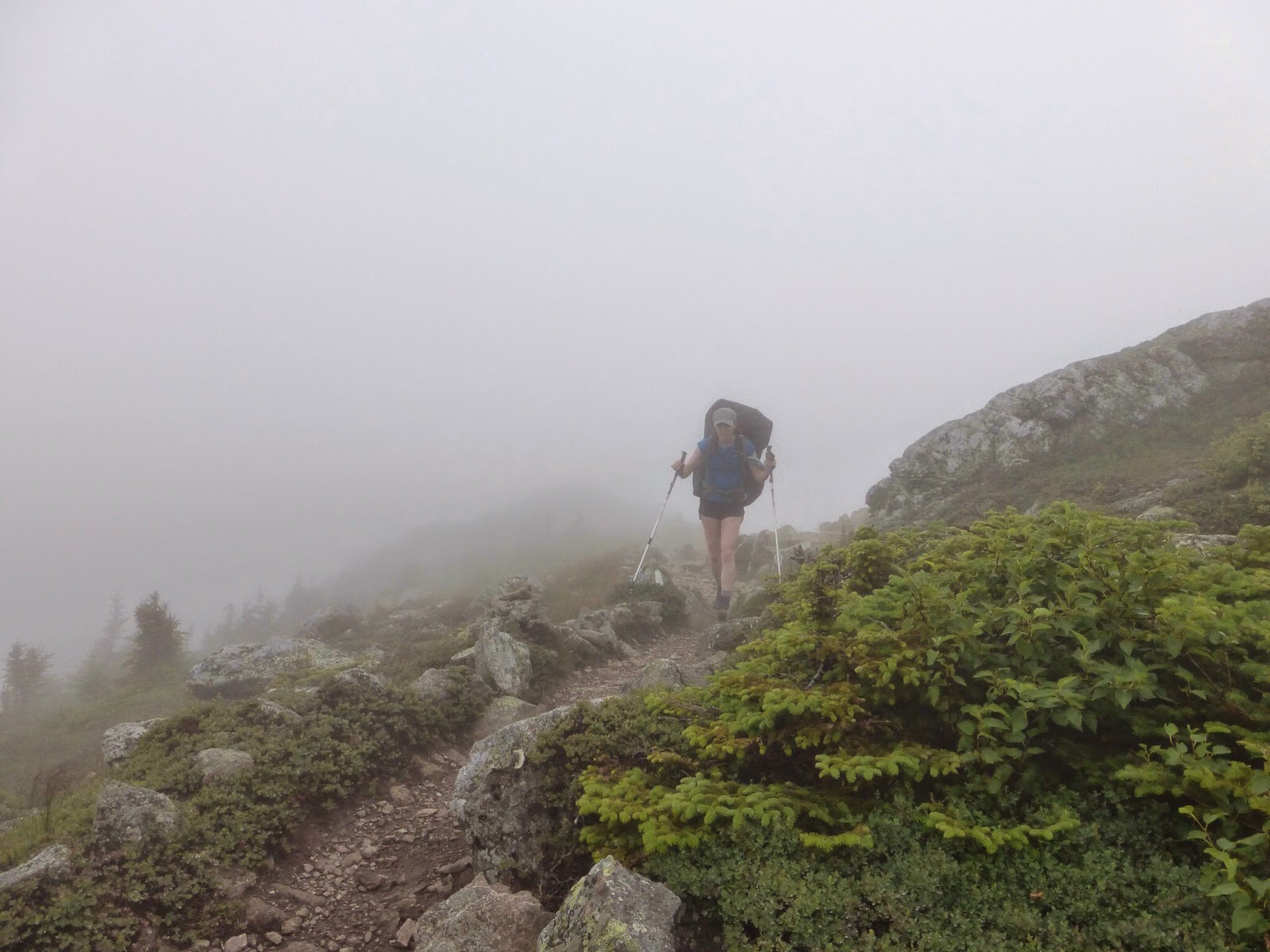 The final couple miles were slow going with slick rocky downhill and we made it to camp just after 6:30pm. It is a dense forest and it is quite foggy and quiet. We heard voices and saw another tent far away, but had the rest of the place to ourselves and that was nice. I am totally struggling to stay awake and type tonight, so I’ll say good night. 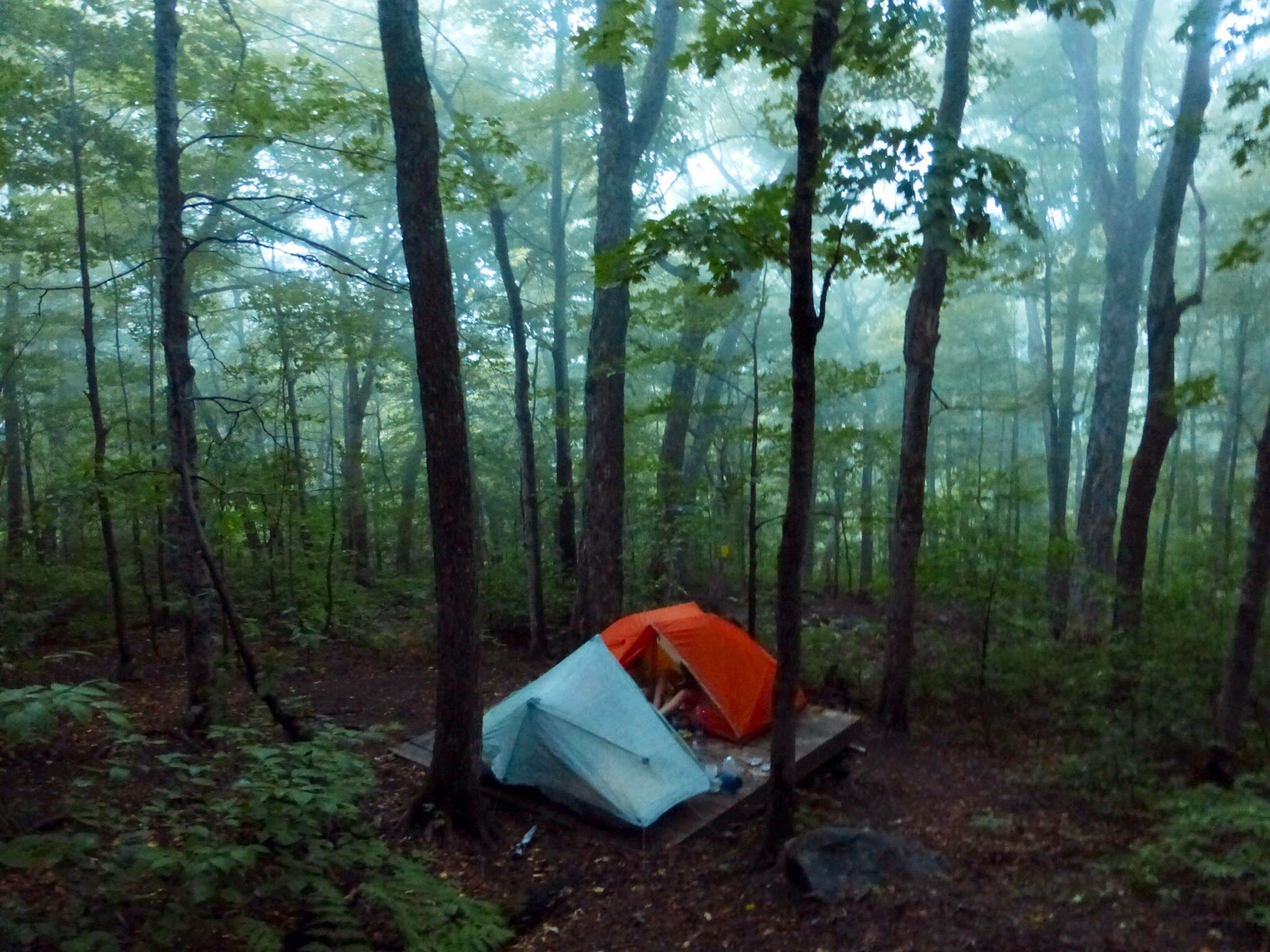