It did rain on and off through the night last night, but nothing too heavy. We awoke to a foggy morning that sounded like rain, but it was just the drops coming off the trees. 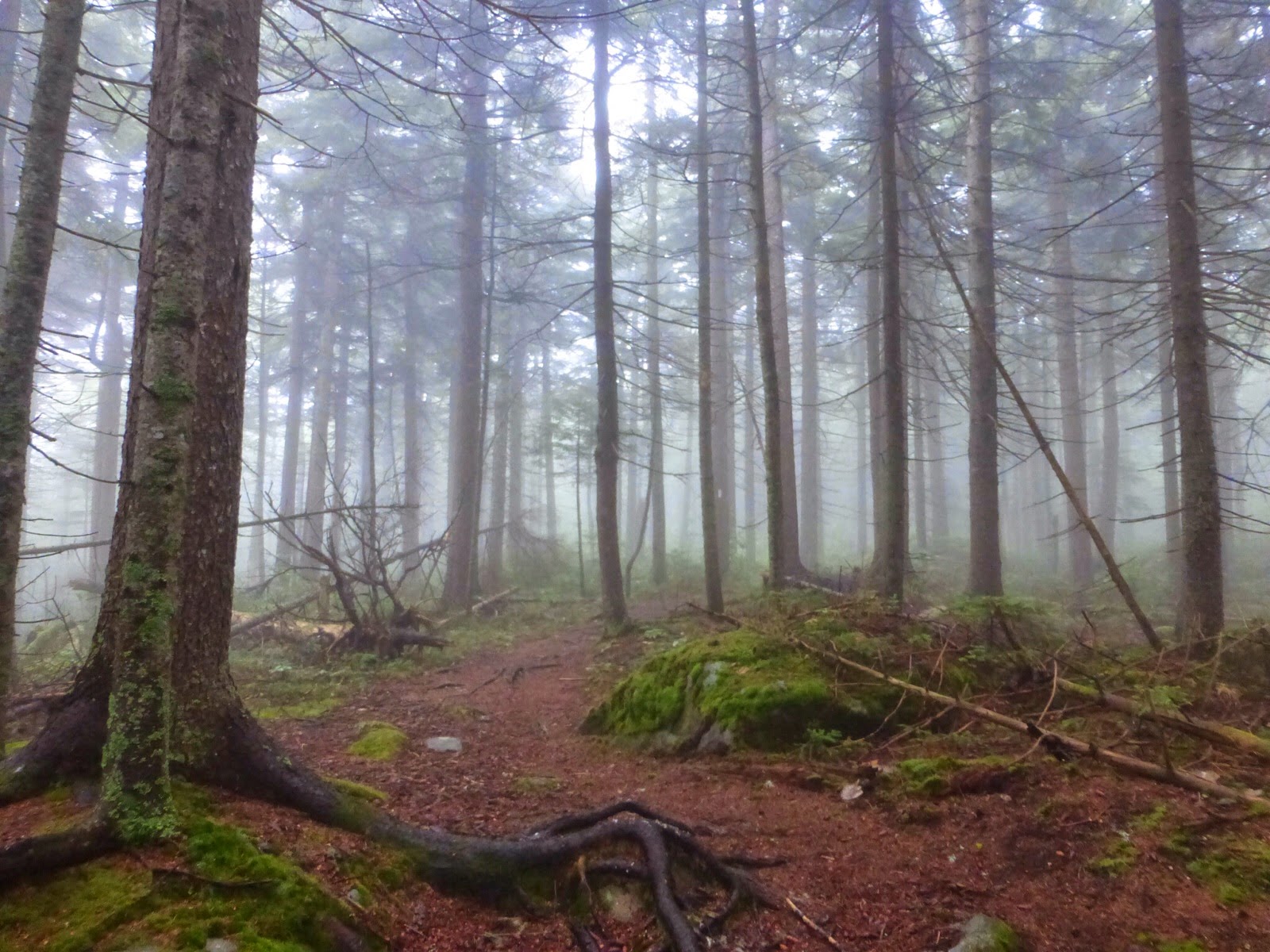 You can see on the elevation chart that the terrain dropped to a low elevation and finally leveled out the second half of the day today! We had hoped to stretch our legs today and get some bigger miles in, but we did a poor job of planning ahead. There is a stream crossing tomorrow that has a canoe ferry across, and due to the timing of the shuttle, we couldn’t make the crossing today before the shuttles stopped. That means today had to be another shorter day. We figured it wouldn’t be too bad since there was still rocky rooty ups and downs in the morning and the possibility of rain much of the day. We got our regular 6:30am start and walked in fog for the morning. There were just two viewpoints today and both were socked in by fog.

We are like race horses in a starting gate at this point with how long it’s been since we were able to stretch our legs for a day. We got a little ahead of ourselves and today had some surprisingly time consuming miles much of the morning. We didn’t mind the slow going since we weren’t in a rush, and took our time through more rocky, rooty, slick trail. 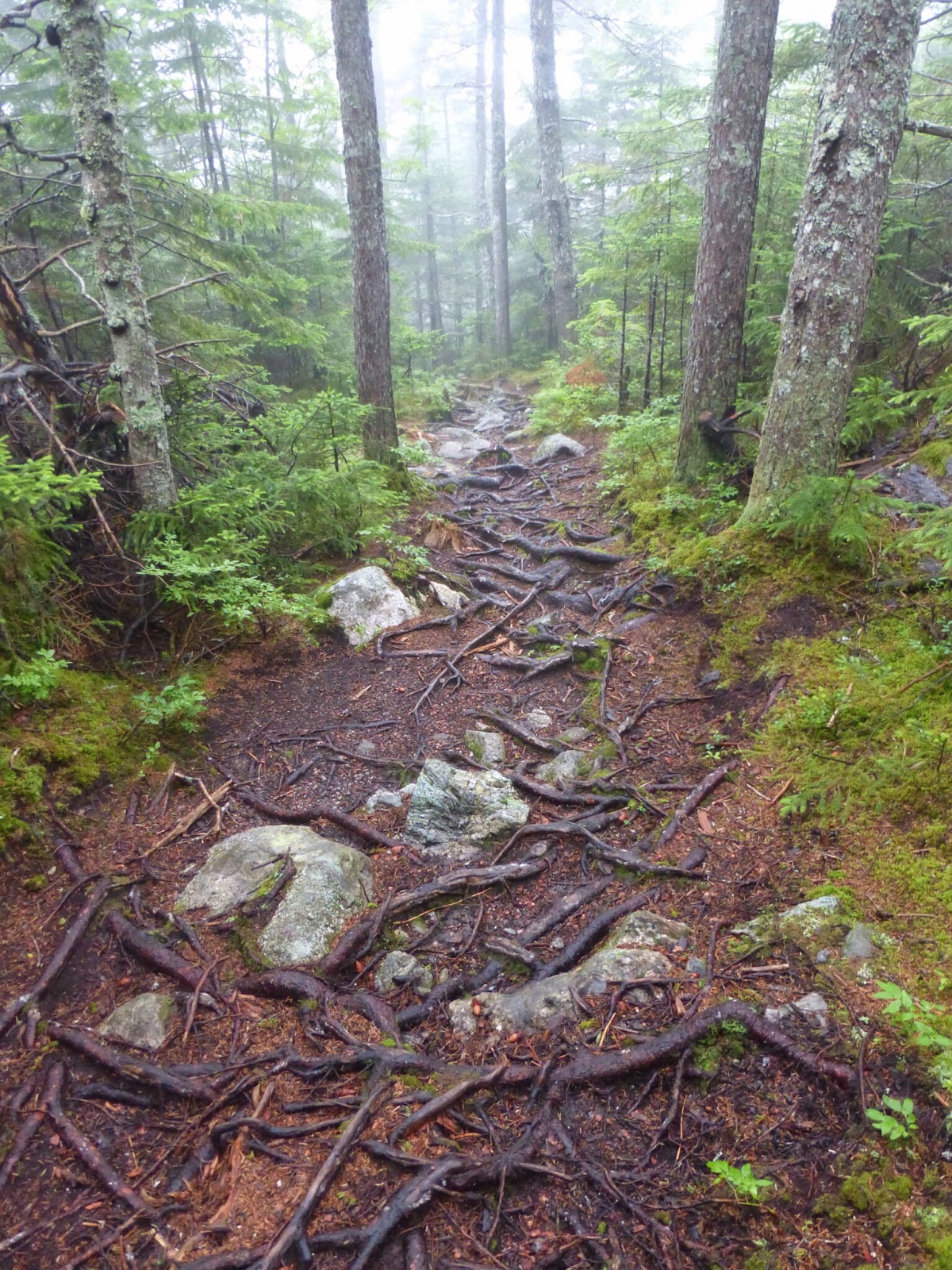 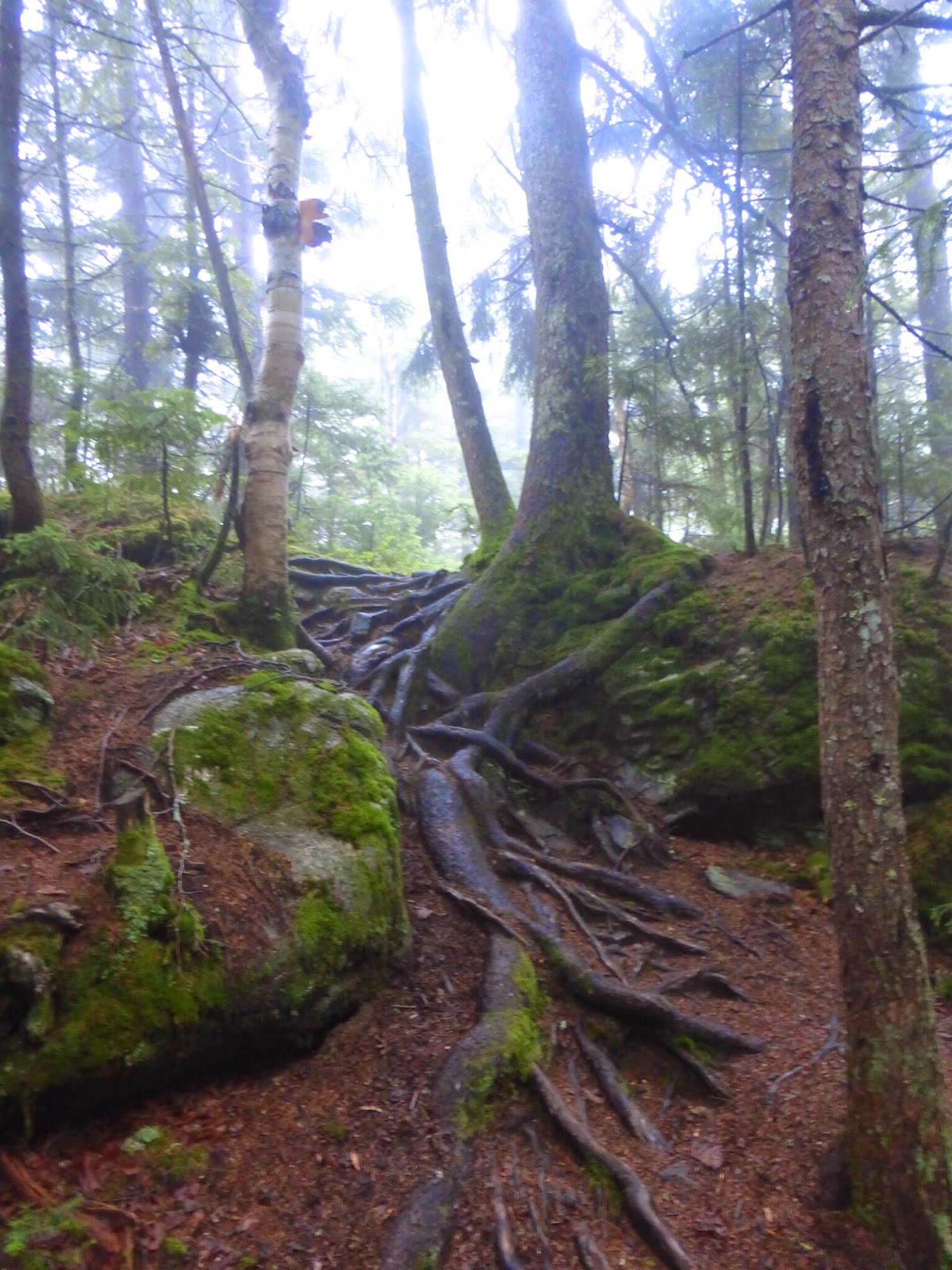 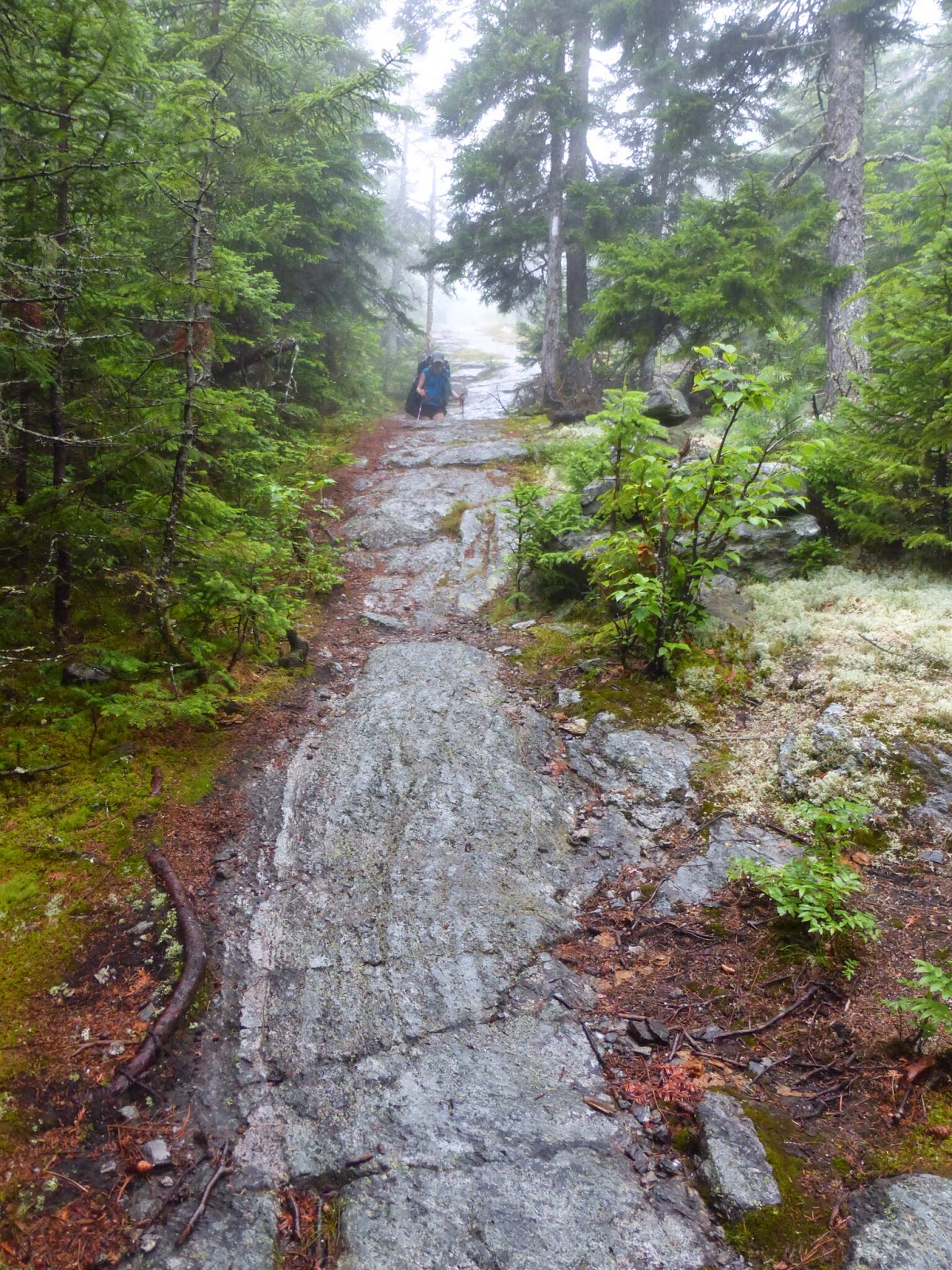 Blueberries are starting to ripen and made Jett Cat quite happy on the way down. 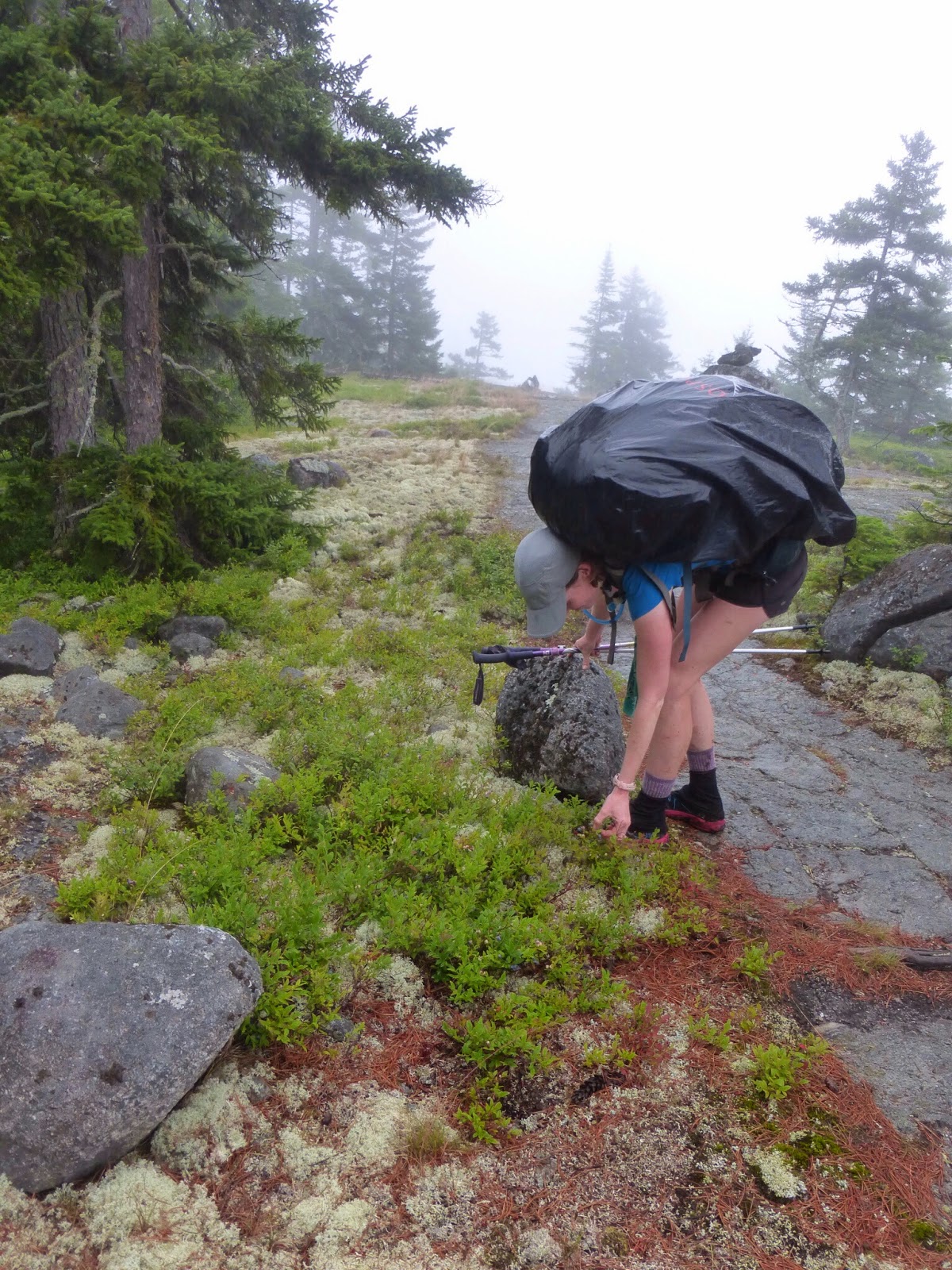 Halfway through the morning, we took a break at a nice spot along Flagstaff Lake. It started to sprinkle and we heard other hikers come by. It was the gals we’ve seen the last two days. They had slack packed yesterday and spent the night at the motel last night. They had just gotten dropped off at the road before the lake and despite the cooler temps and drizzly day, they came right up and skinny dipped. Jett Cat and I were impressed with their gumption and they are a fun and entertaining crew.

After our lakeside break, we aimed for a shelter for lunch since rain was expected. Our timing was perfect as it started to really come down just as we arrived. There were about 10 hikers who came through or stopped at the shelter as it rained and only one was a guy. The high quantity of women is unique and fun to be around. Especially the group we’ve seen now for three days in a row as they are an energetic and entertaining group of eclectic young women. 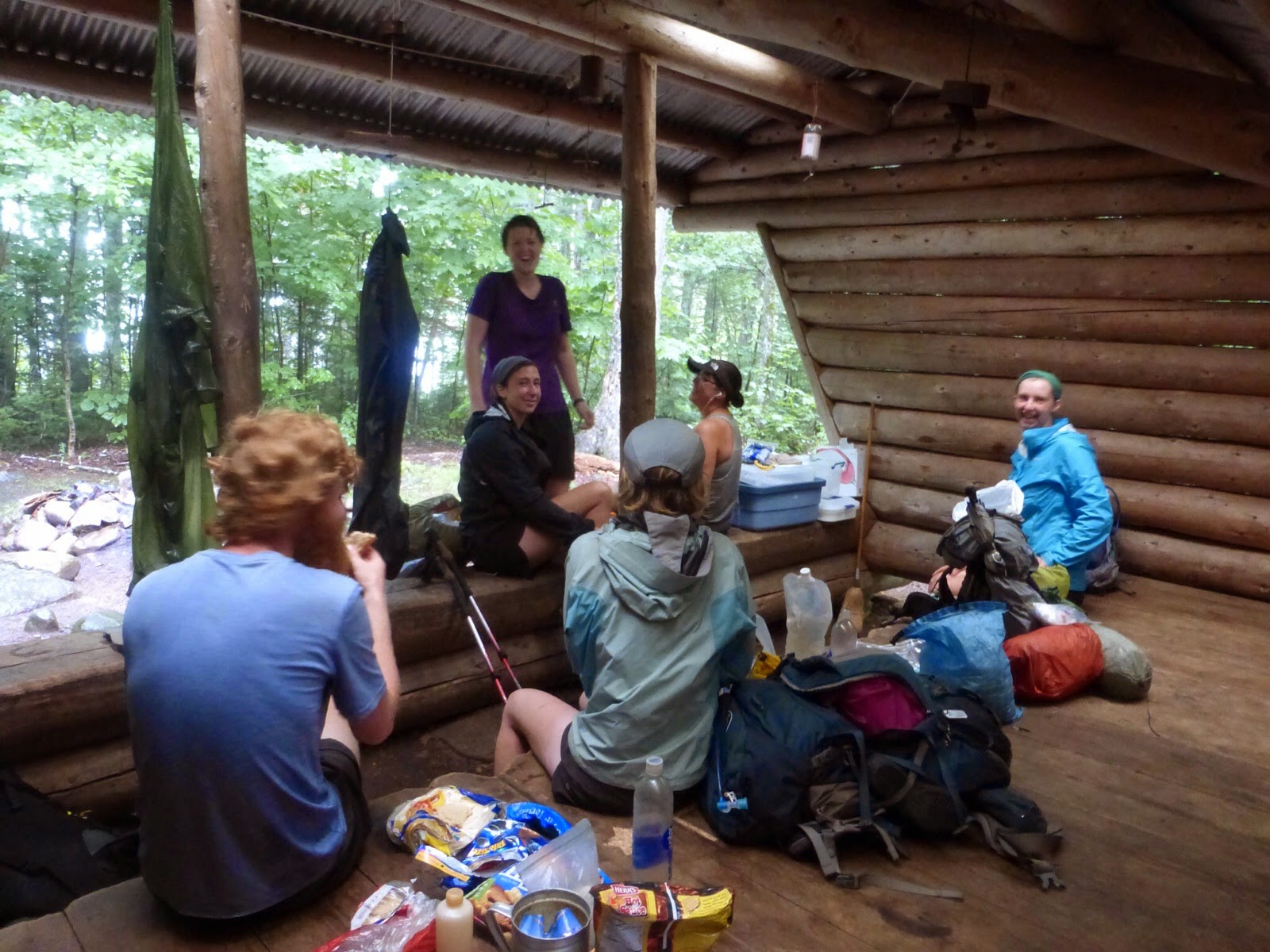 After lunch was when the terrain was hopefully going to really clear out. We were a bit frustrated by our slower pace as the trail was flat, but there was still lots of obstacles to prevent a good pace. It was raining steadily at the end of lunch so we ended up staying at the shelter at least an hour and a half hoping the rain would lighten up, but no such luck. It rained steadily or sprinkled the rest of the day. The trail went by many lakes today and there were lots of wooden planks to walk on that were quite slick and sometimes slanted. I slipped and fell on one today and poor Jett Cat had it happen twice off the boards and a third fall on slick rocks and mud. She was a great sport about it as usual and thankfully has no scrapes and just a few bruises. 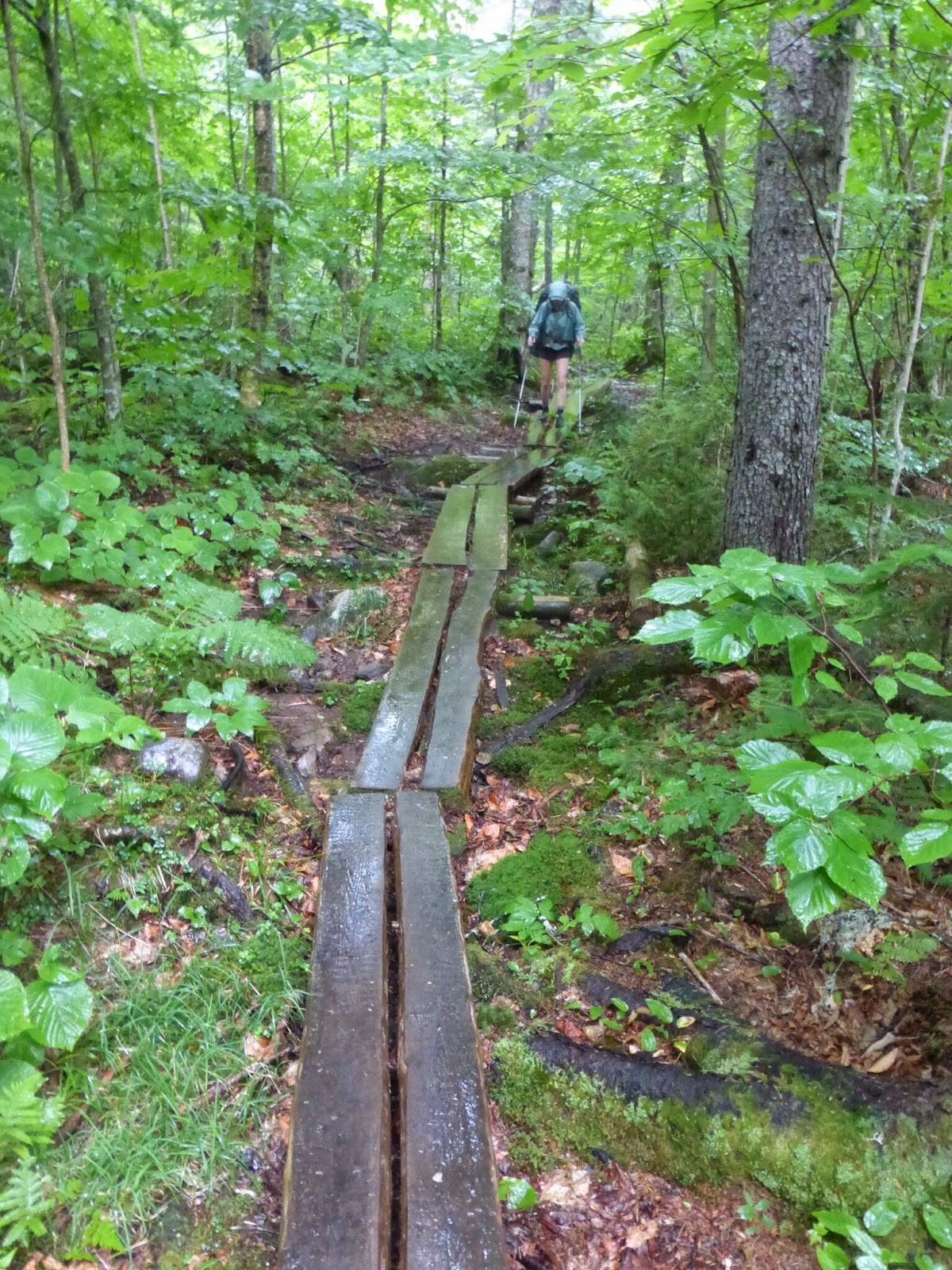 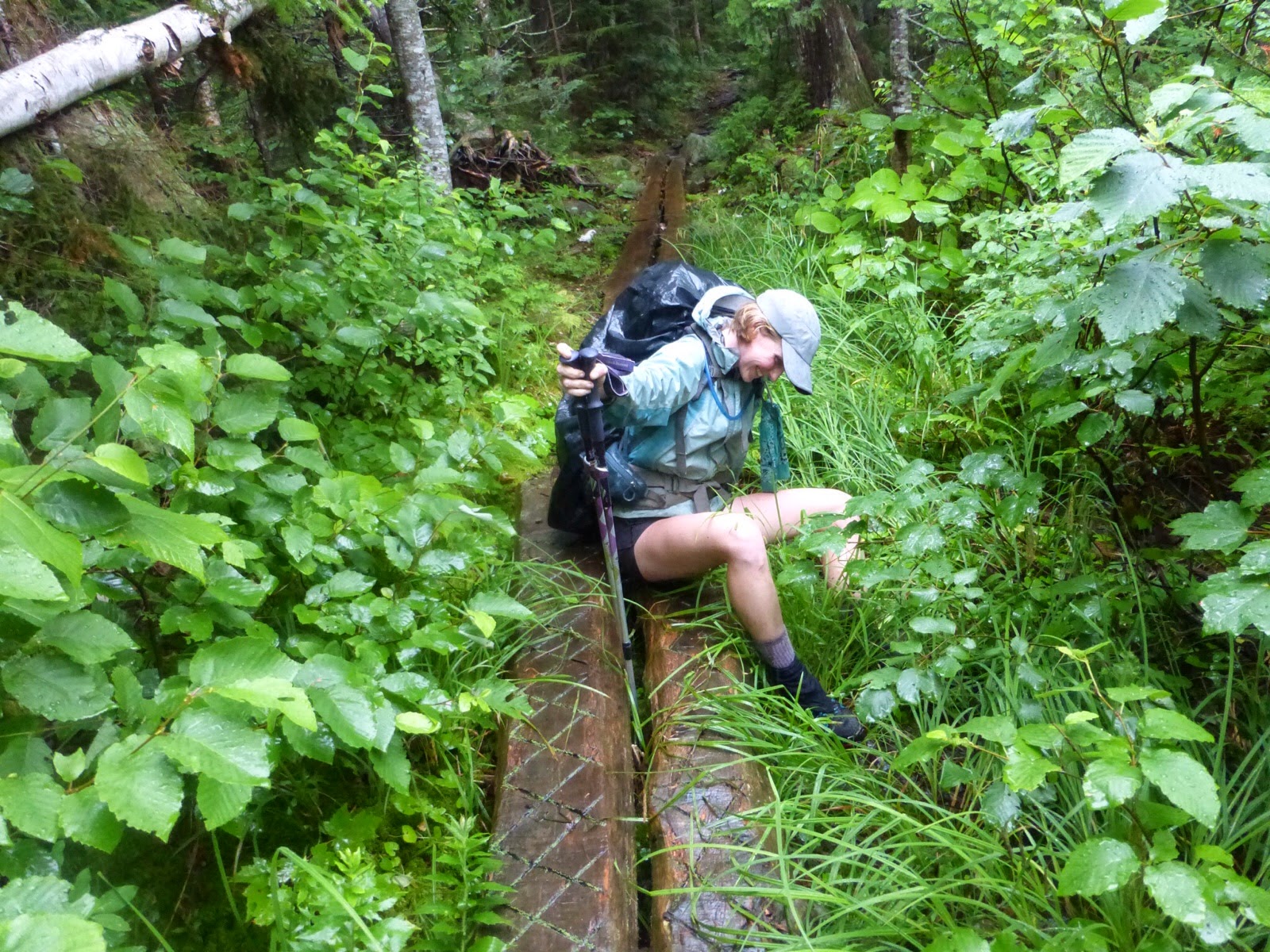 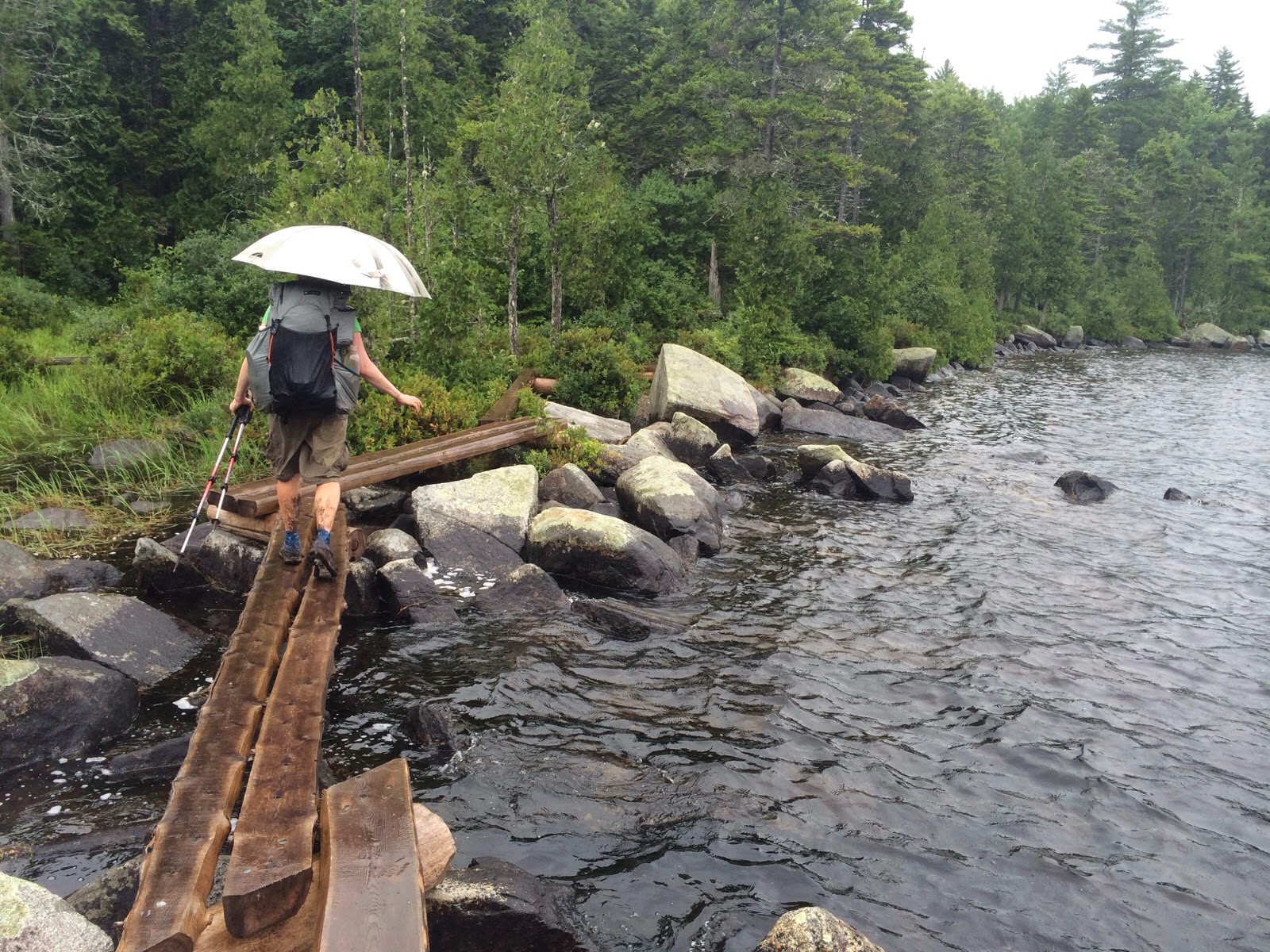 The trail finally did open up the last few hours of the day and we were able to do close to a 3mi/hr pace. It felt good to stretch our legs a bit, but it was quite muddy and the trail is full of puddles. 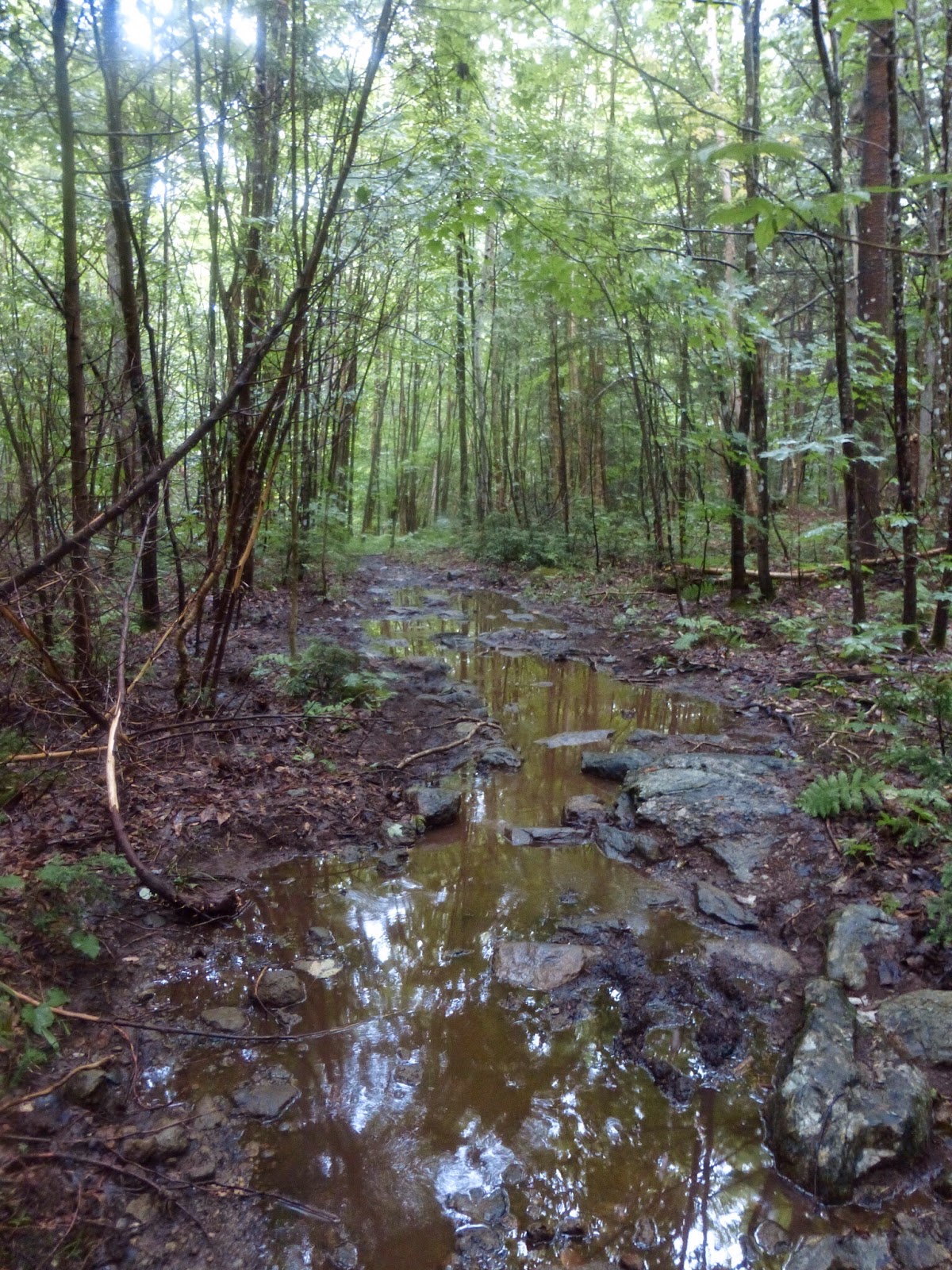 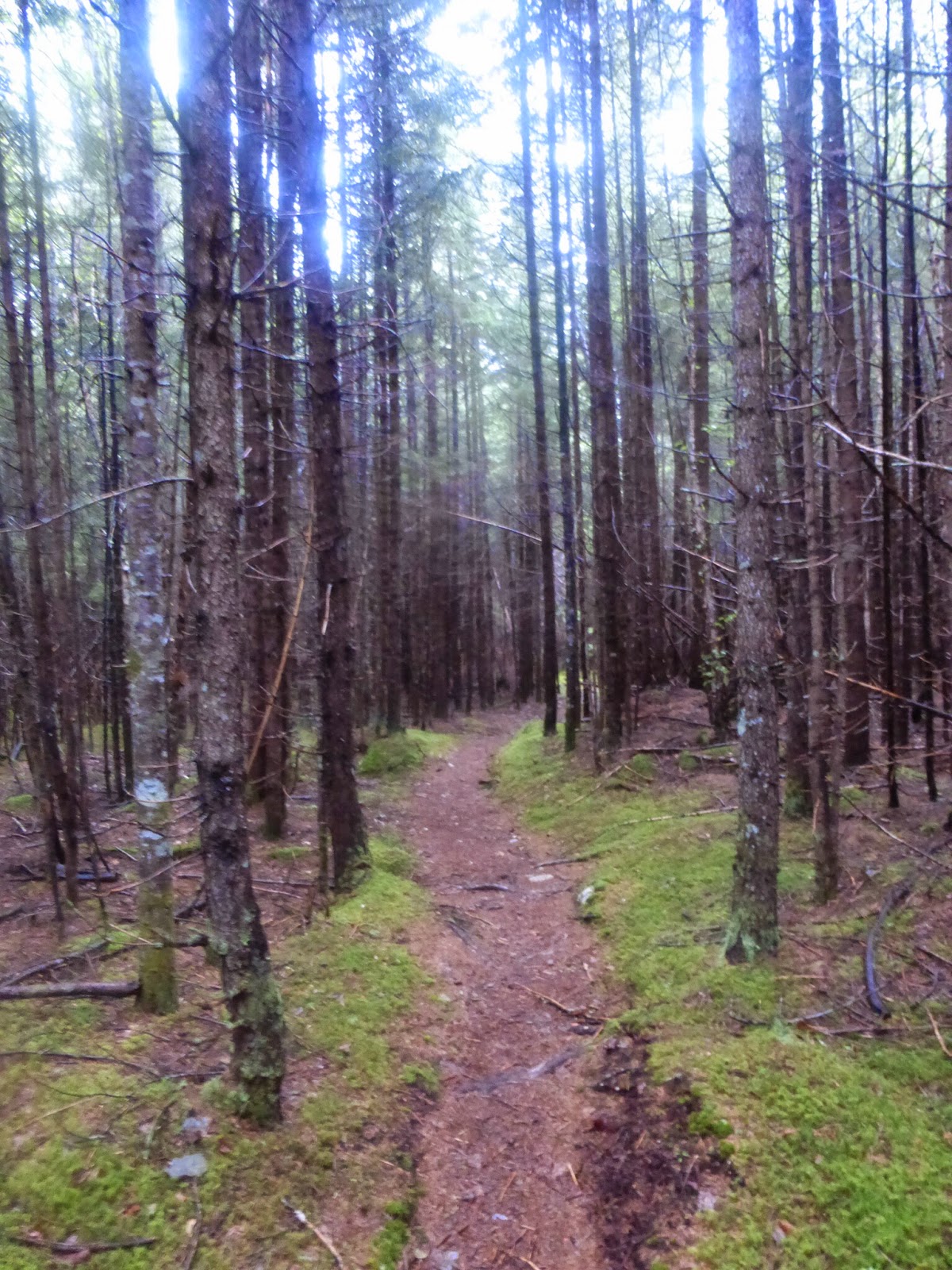 We ended up getting to the Pierce Pond shelter and camping at 6pm and we had plenty of time to set up and do our camp chores as rain continued to fall off the trees. This is a popular site and many hikers are here of all sorts, but we are camped away from the crowd and ended up having to find random flat spots not far from the shelter. 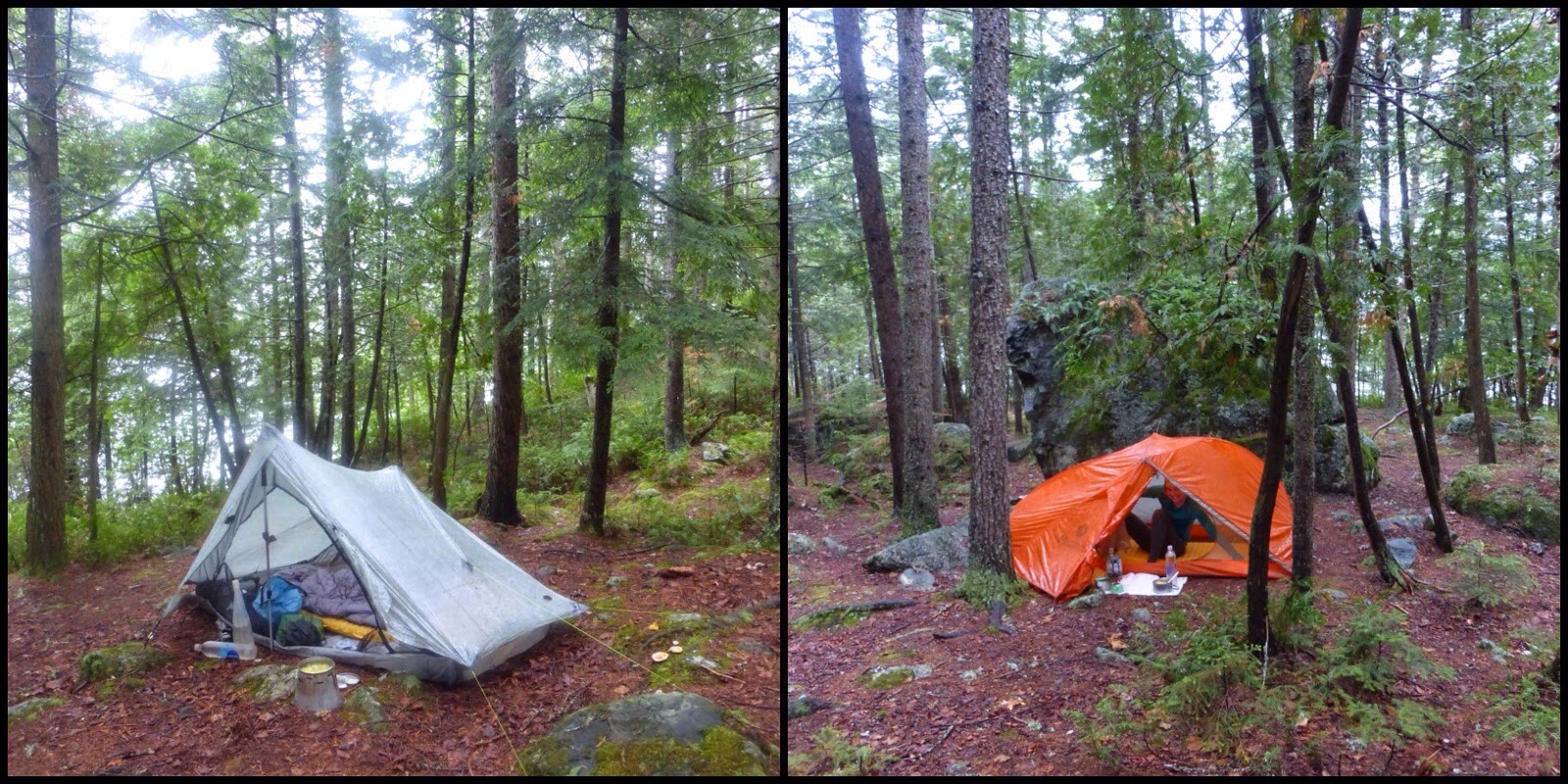 The ferry we need to catch across the river tomorrow is 3mi away and doesn’t start until 9am, so we will sleep in and leave later tomorrow as there is no reason to leave at our regular 6:30am time. I have fallen behind on sleep and I’m happy to get an early night and relaxed morning to catch up. With the rain tonight and last night, I just struggle to stay awake as I blog and come in and out of sleep as I type. Walking in rain just wipes me out like I’ve been swimming or something and I fall asleep quickly to the pattern of the rain on my tent. After dinner tonight, I actually fell asleep for an hour when I attempted to journal. I woke up at 8:40pm and was momentarily disoriented due to the lighting and though it was already morning. I was totally out of it. Then the lightning and thunder came and it is currently storming, but thankfully nothing hardcore. Lots of bright lightning flashes and long rumbles of thunder, but just a steady windless rain so far. I hope to sleep pretty hard as I’m still struggling to stay awake. The hope for tomorrow after the delayed start is to see if we can finally get back into mid 20s mileage. More rain is in the forecast for the next two days, so it looks like it will be quite a soggy leg. We shall see…