Oh man, I’ve only been in Vermont for a day and a half and I can’t wait to get through it! It was a nice night and thankfully, it didn’t rain. I was awake at 5:15am, but I was so cozy in the 60 degree temps and my wool pjs that I repeatedly went back to sleep. I really didn’t want to put all my cold, wet, musty clothes back on and hiking in the rain yesterday just wore me out. I started hiking by 7am, which was coincidentally within a ten minute range of the other three thrus that stayed at the shelter. Their names were Hiker Monkey(who I camped with a few nights ago), PG-14, and Mr Jingles. I leapfrogged with them and one other hiker named Super Soul through lunch, but didn’t hike with any of them for an extended period of time. Good to see other hikers around though. The morning hiking had a long downhill and then a long climb in less than ideal conditions. It was muggy, muddy, steep, rocky, brushy, and rooty.
Rocky, mossy downhill… 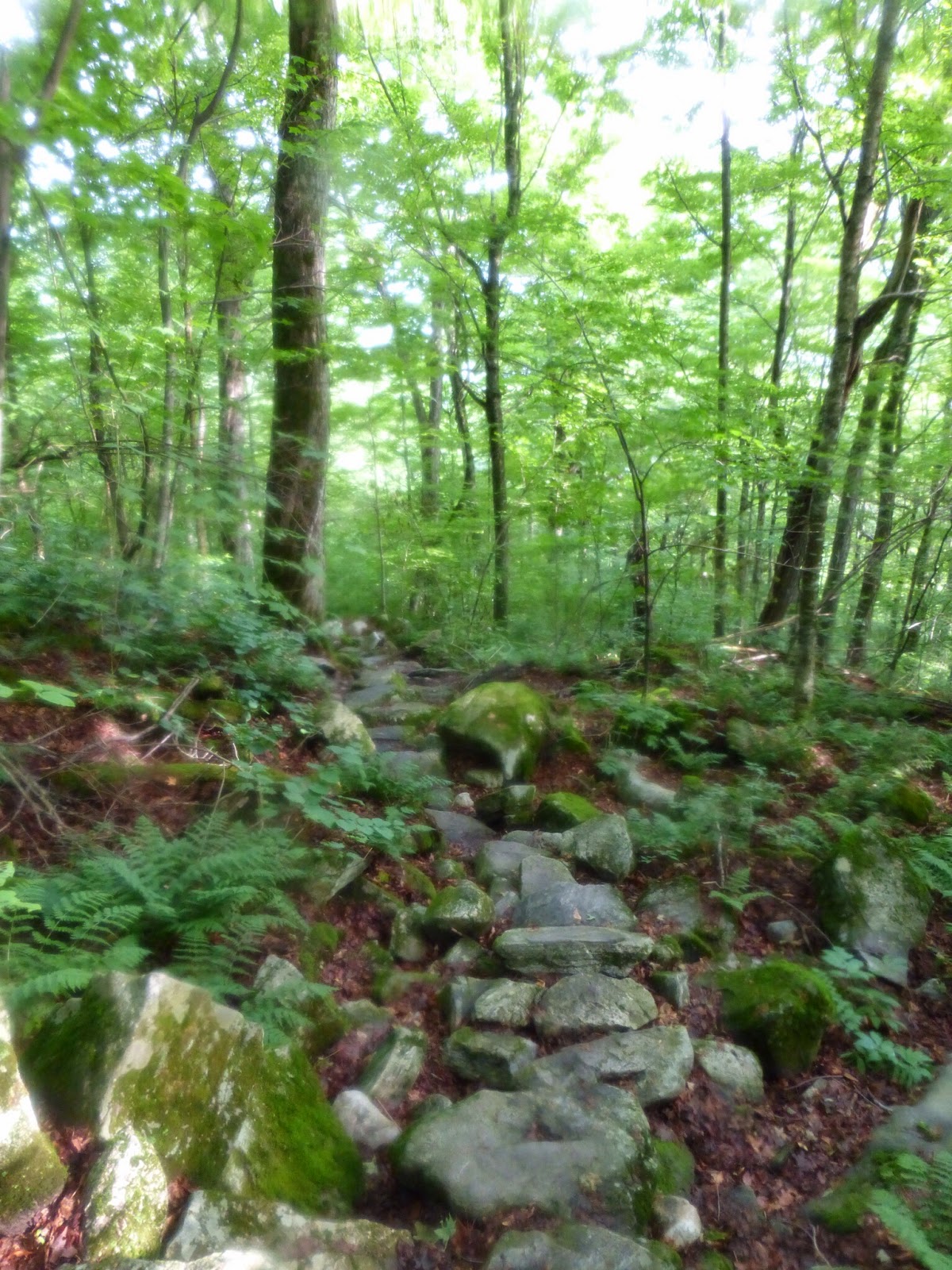 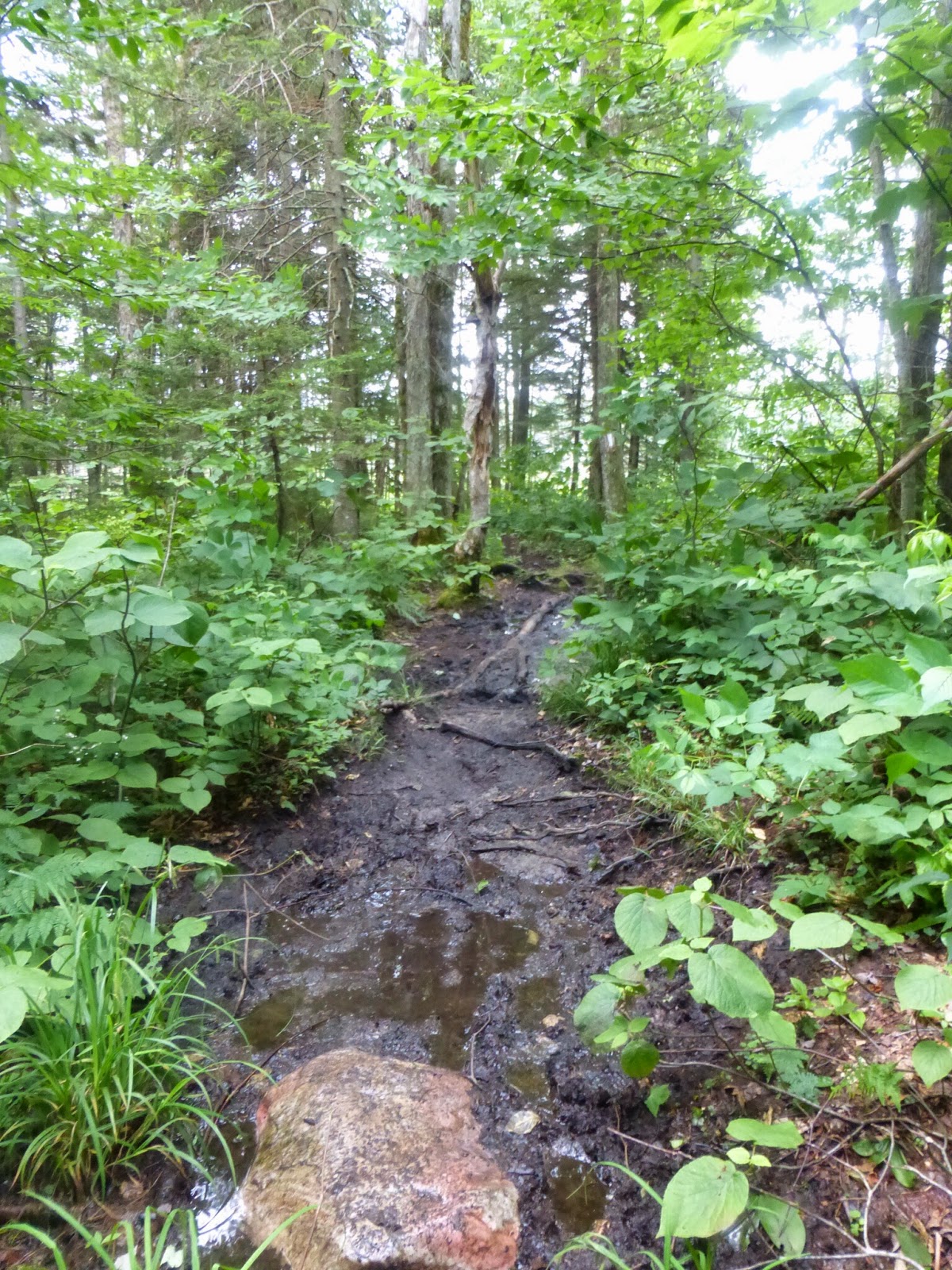 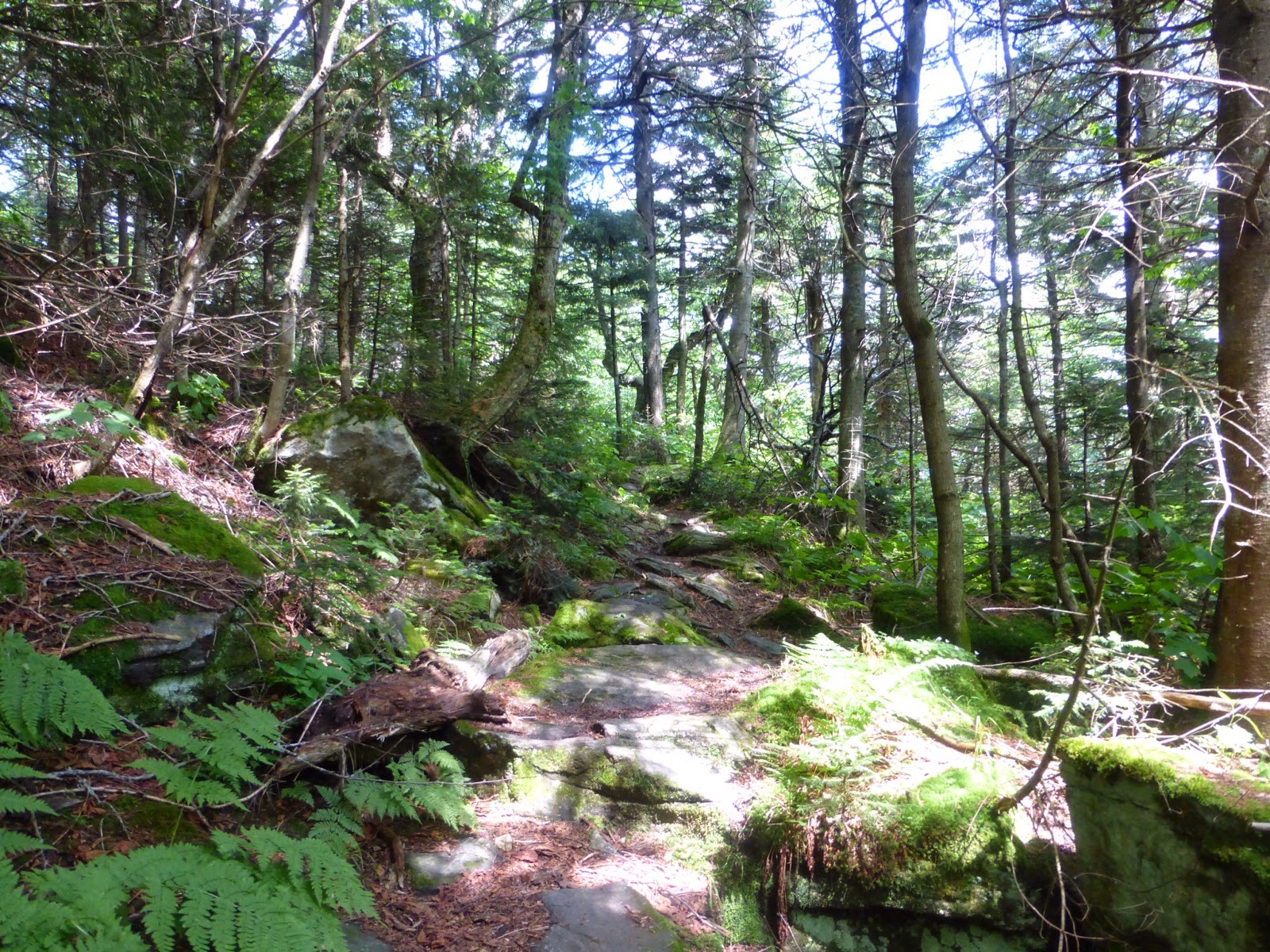 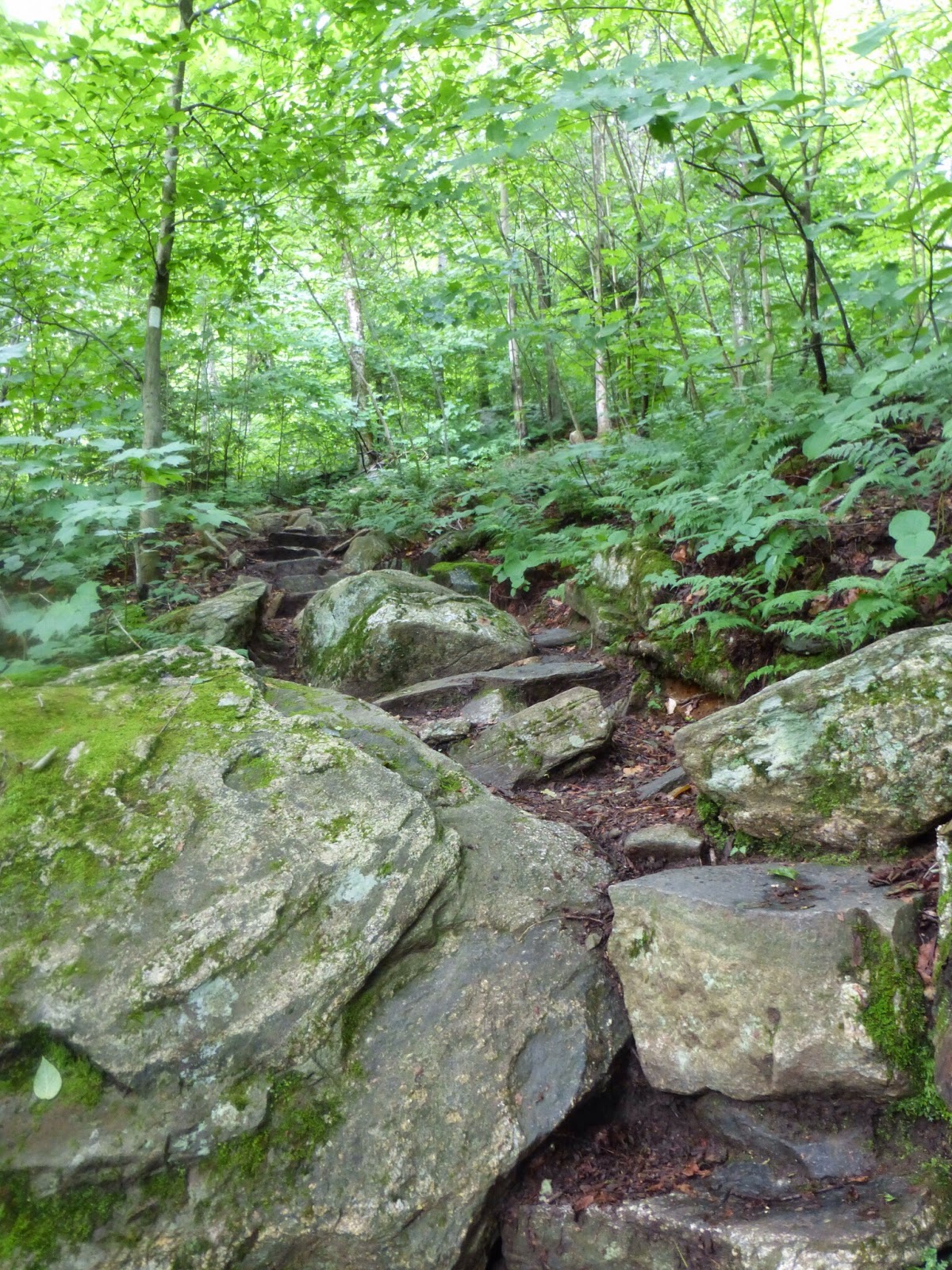 I am really not a fan of Vermont and the Long Trail thus far. Vermont is often referred to as Vermud and I can understand why, but it was surprisingly less soppy than I expected after yesterday’s rain. It was really precarious hiking with slippery stepping stones and logs through the mud, but there was no telling how stable those steps would be. I lost my balance and stepped in the mud many times and it was a thick mud that swallows your whole foot. There were planks to walk over at times and I found it amusing that some were not nailed down and if you stepped wrong, they’d come up in the air like a board on a cartoon that hits Wiley Coyote in the face. 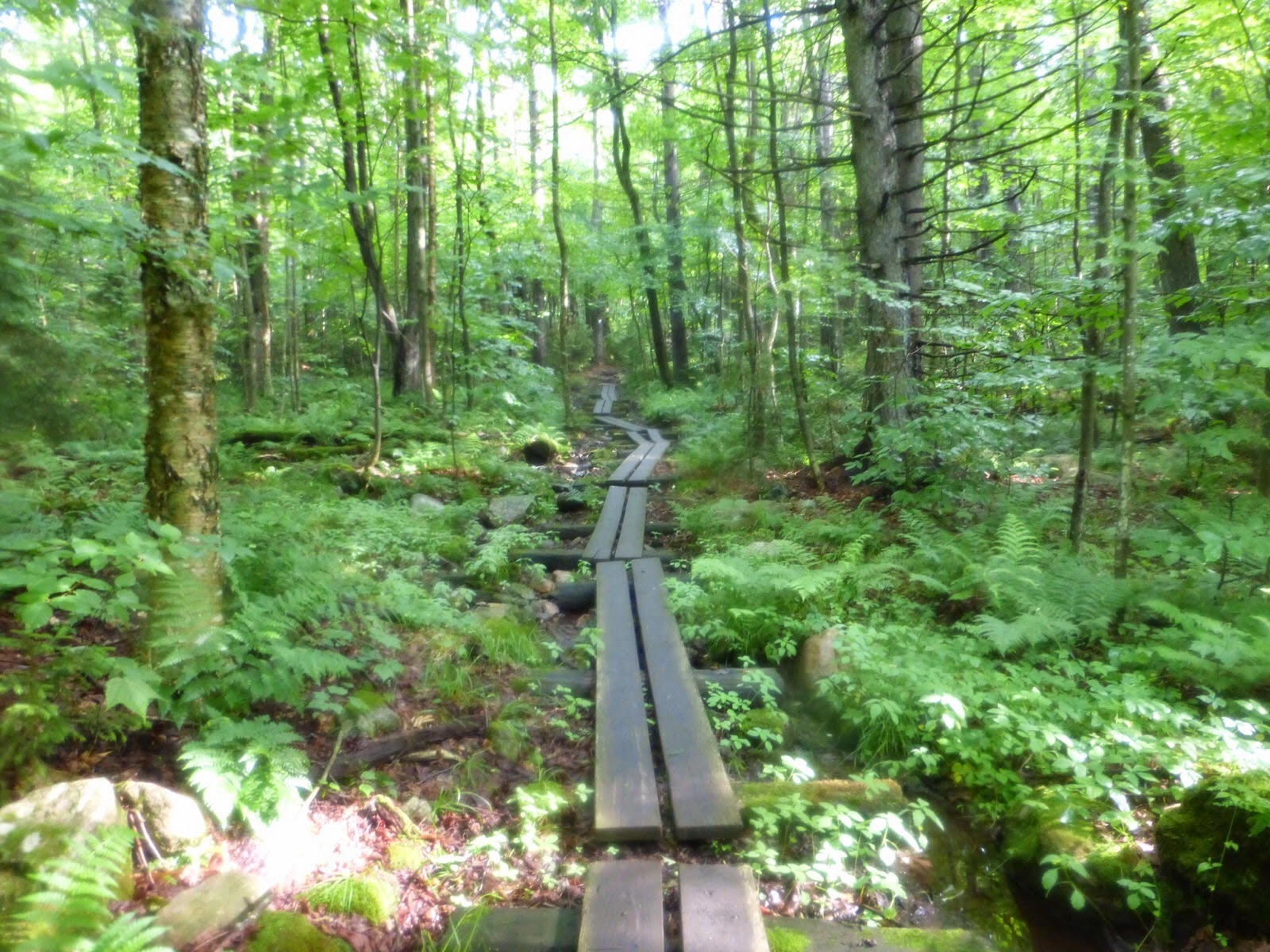 Most of the day was spent strongly focusing on each step. Especially with my paranoia of my weak ankles and everything being wet, I was cautious on every step. That wore on me over the day and it was made worse by the often brushy trail. I’m a big fan of personal space and it’s one of the most challenging things for me to control my anxiety and claustrophobia when there are constantly things touching me or providing resistance to forward movement. 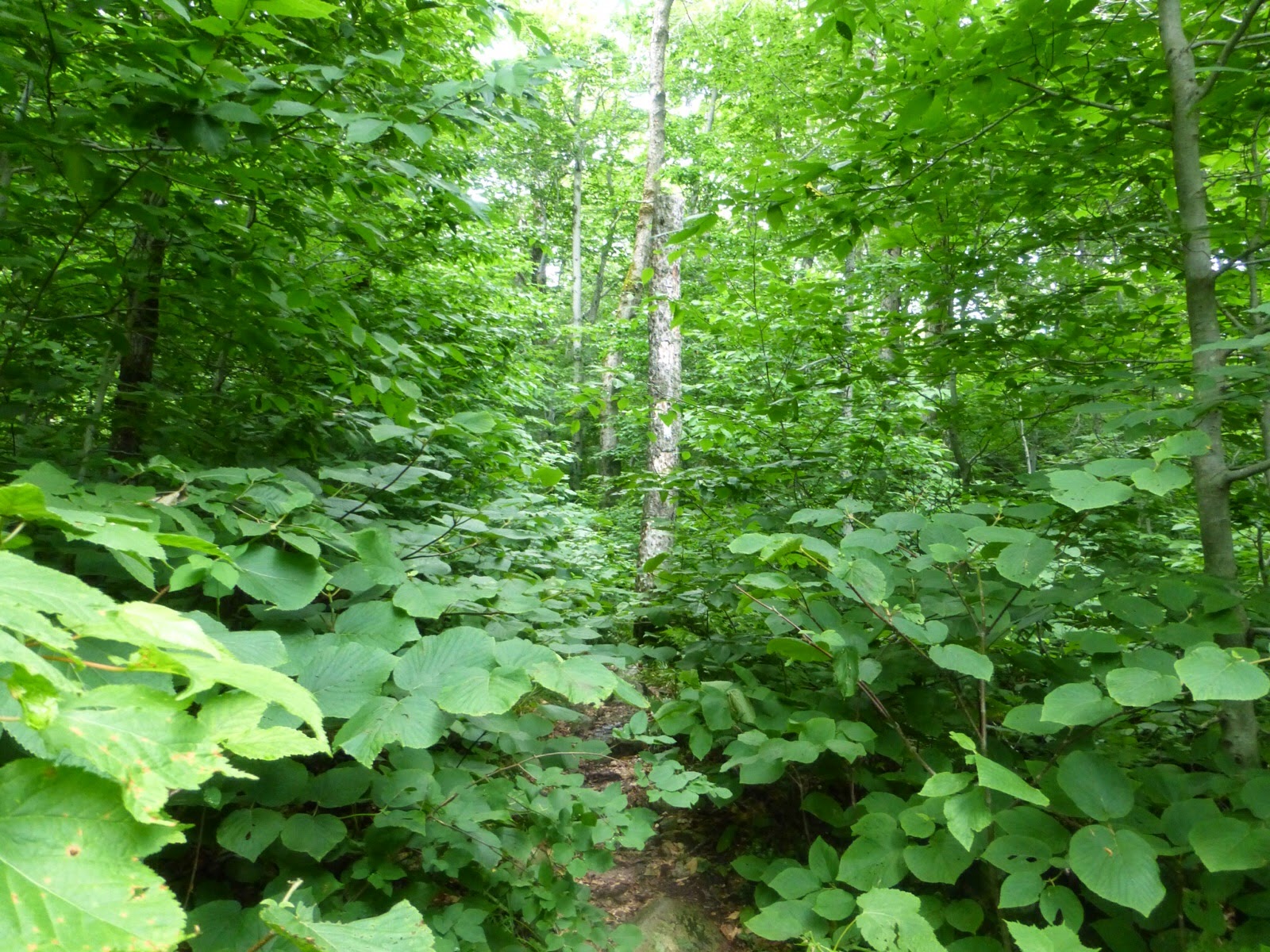 The highlight of the day was right after lunch when we finally got a real view! We had all converged at lunch at a shelter and ended up going to the Glastenbury Mtn Lookout Tower at the same time. It was great up there! The tower stood just atop the pine trees all around it, so it felt like we were standing on the treetops. Notice those seemingly innocent clouds gathering… 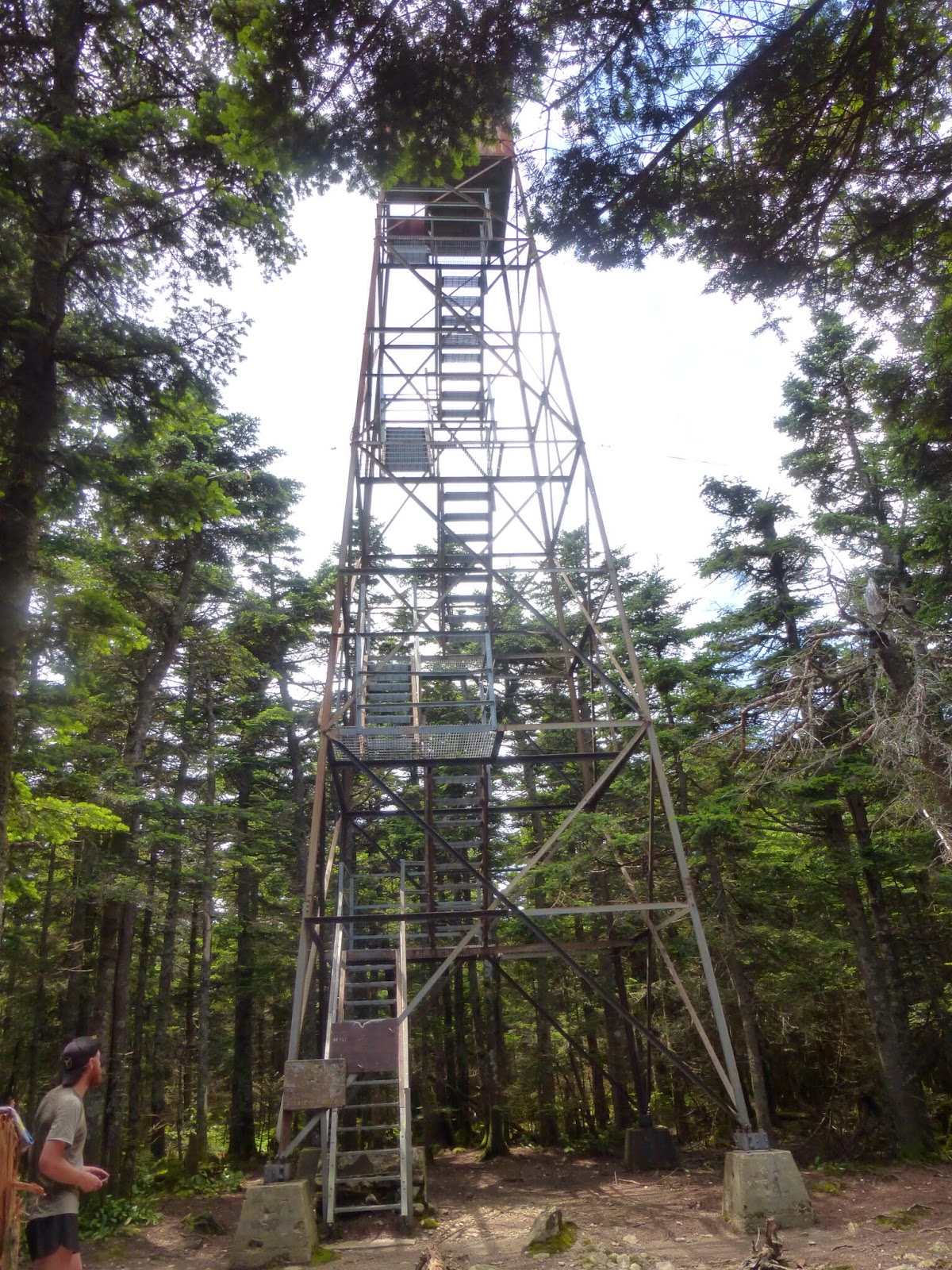 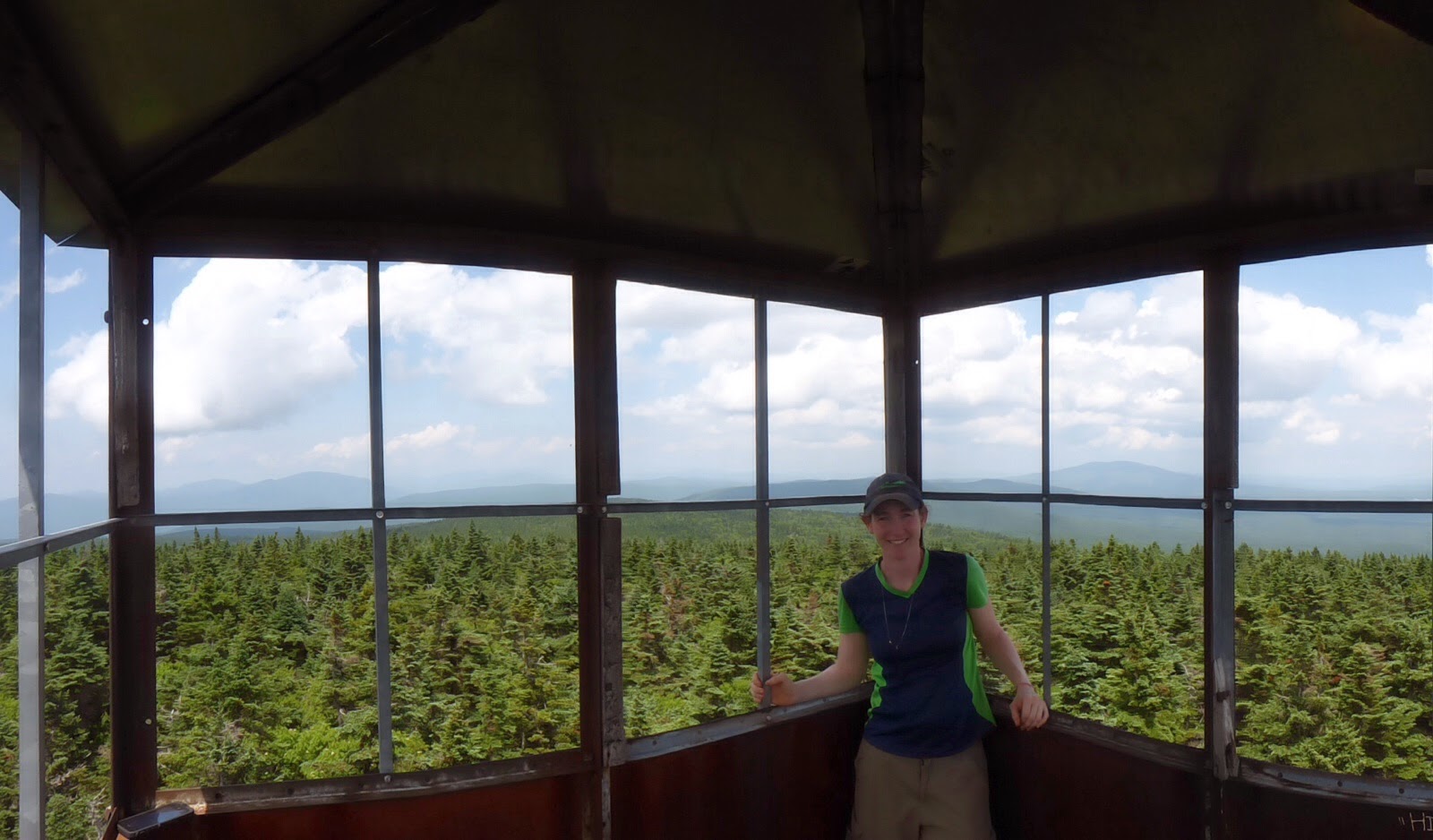 The rest of the day was more of the same, but more bugs to add to the fun. Annoying gnats just swarmed around my head much of the afternoon and some enjoyed going in my eyes and mouth at times. It was too hot and not buggy enough to make the bug head net worth using, but it was close and I was glad it was just gnats and not mosquitoes. Oh the fun.

I am very excited to be getting to town tomorrow and I wanted to get as close as I could, but I ended up stopping a bit early at 6pm for a couple of reasons. I was fairly tired and there are few good camping options in all this brush. I was at a good place right next to a large brook and I didn’t know how long it would be until I found another clear spot. Most importantly, it had rained a slight bit right as I arrived and thunderstorms were forecasted. The clouds were gathering and it was getting darker, so I figured I’d play it safe. It was nice at the brook. 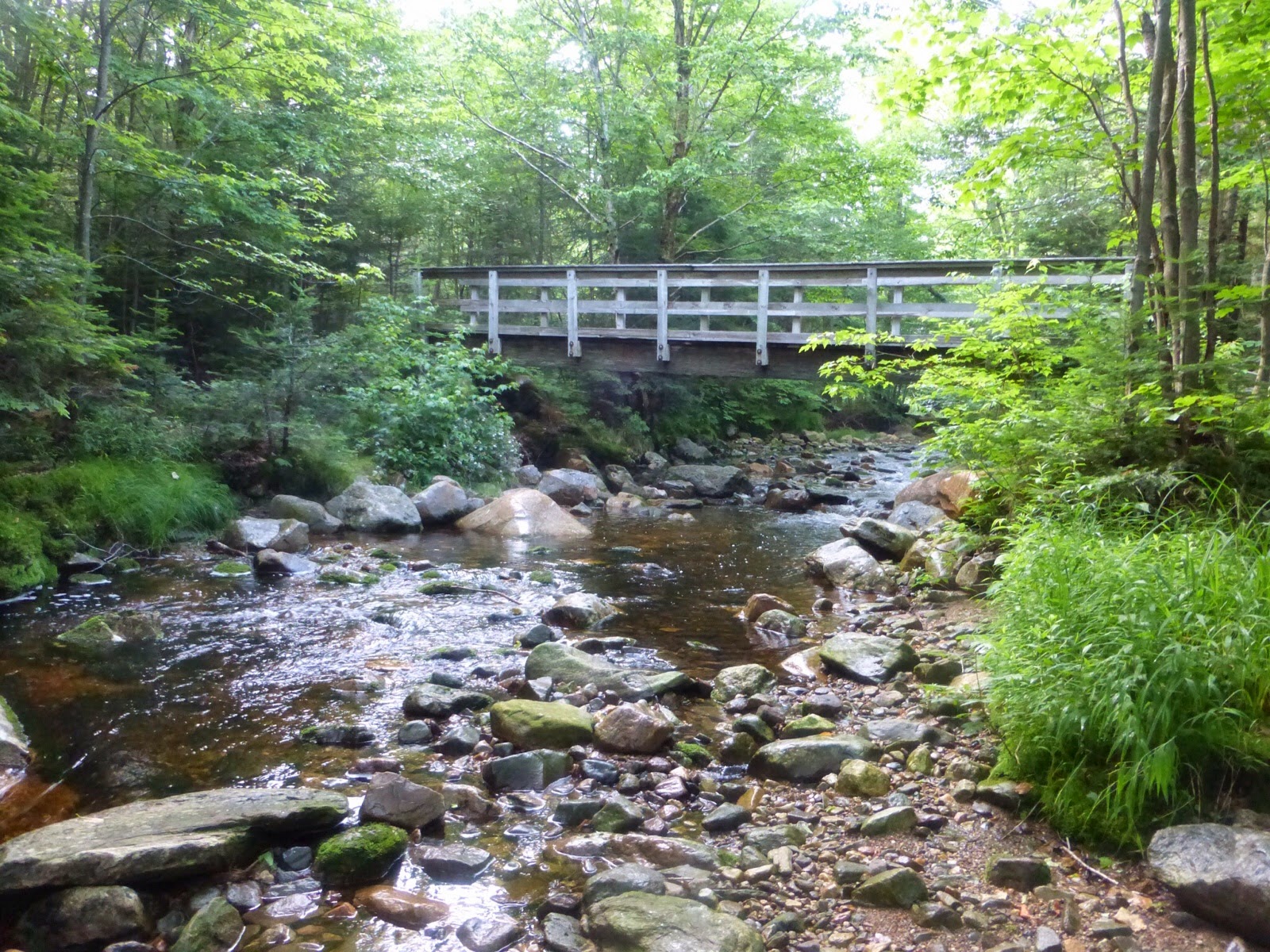 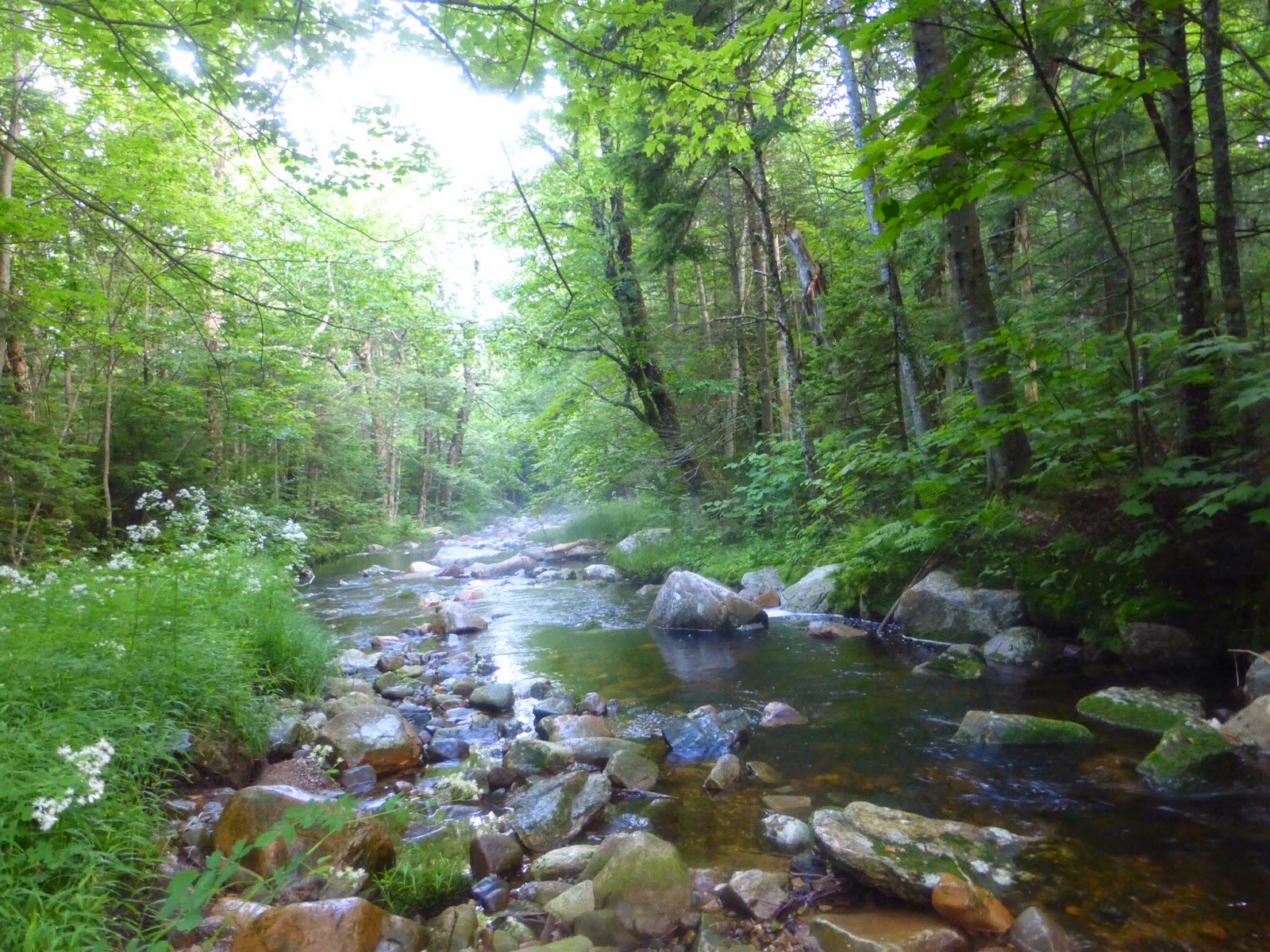 I had a couple choices as to my setup and went back and forth on my choice. I usually don’t like the harder packed spots without leaves as I’ve seen those puddle. There was another site on the other side of the bridge that looked better for rain, but it was much smaller and more wooded. I wanted a bit more space and a place to sit down, so I chose the hard packed spot…wrong choice! After I setup, Super Soul hiked by and was temped to stay, but wanted to try to push another 7mi to get closer to town. We discussed the chance of storms and it seemed like the worst it would do is rain a bit, so he hiked on. I kid you not, no more than 5mins later, the loudest thunder and brightest lightning I’ve ever experienced struck. It got really dark and the storm dumped rain. It was right on top of me as the lightning and thunder were almost identical in timing. It was quick and down to a light rain after 20mins and I found myself in a puddle. Argh! 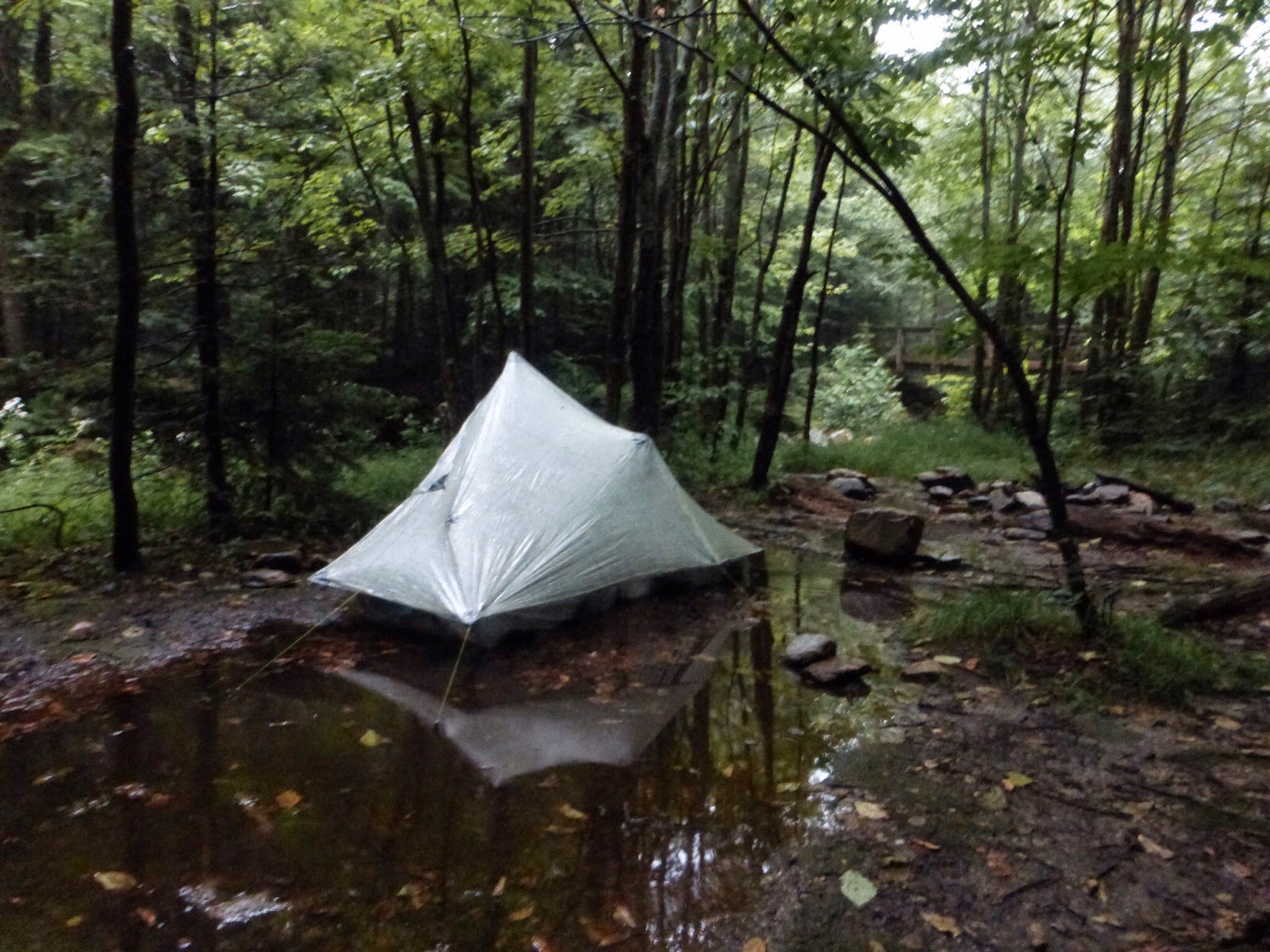 It seemed to be ok, and the tent was good so I figured I got lucky it wasn’t worse. Well, that’s when the second wave hit for at least another 40mins. It’s been about 2hrs since it started and it is raining lightly. Problem is that somehow, the puddle has seeped in through the bottom of the tent and there is a small layer of water collected under the bottom half of my sleeping pad. I’m so mad at myself for choosing this spot when I’ve heard so many stories of people who have had the same thing happen! The plan is to just get through the night using my sleeping pad as an island and hopefully keep my sleeping bag out of the water. It’s a small layer of water, but I worry it will only get worse overnight. It actually seems to be improving with time so there’s hope. I’ll be fine if I stay on the pad and I have everything else securely in my pack and waterproofed. It is raining harder now and I’m happy I have an extra Ziploc to pee in at least. I’m such an idiot! Boo Vermont! This really has me rethinking my plan to return to the Long Trail after the AT too. This just isn’t fun. All this work for very little reward. Oh, did I mention there’s also hardly any cell signal. I can barely text so far and can’t load the blog. So glad I’m headed to town tomorrow!