The goal for today was to try to relax a bit on the mileage and stay in the mid 20s. I had scanned the guide last night and saw that 25mi would land me near roads and I don’t like that, so I had to either stop early or go a bit further. I decided to see how the morning hiking went and then figure it out. I was up early and energized, so I started hiking at 6:40am. It was nice hiking again today and I was actually able to cruise on somewhat smooth trail. Much of the day was along streams or lakes and there weren’t too many mosquitoes, so that was really nice. 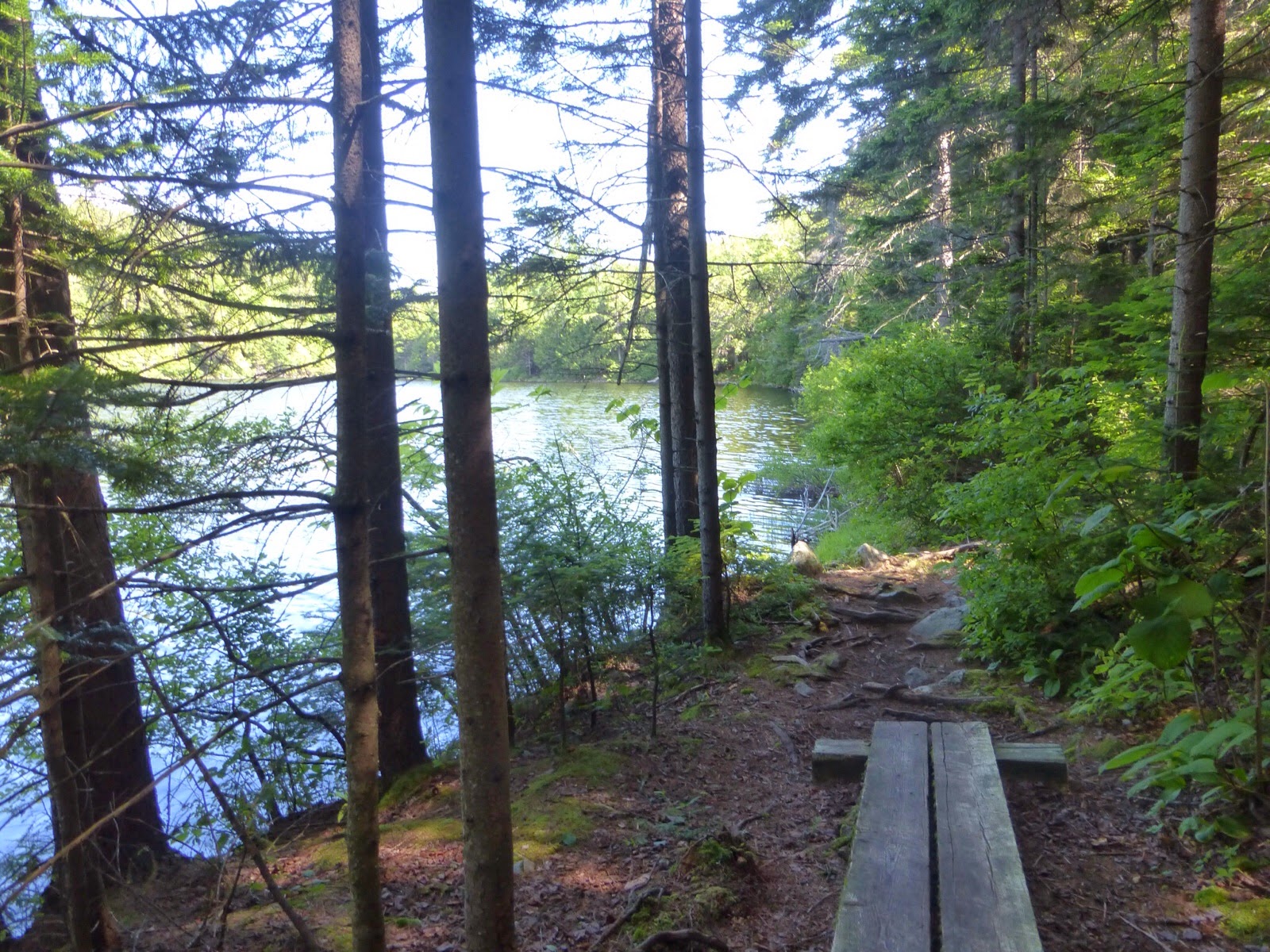 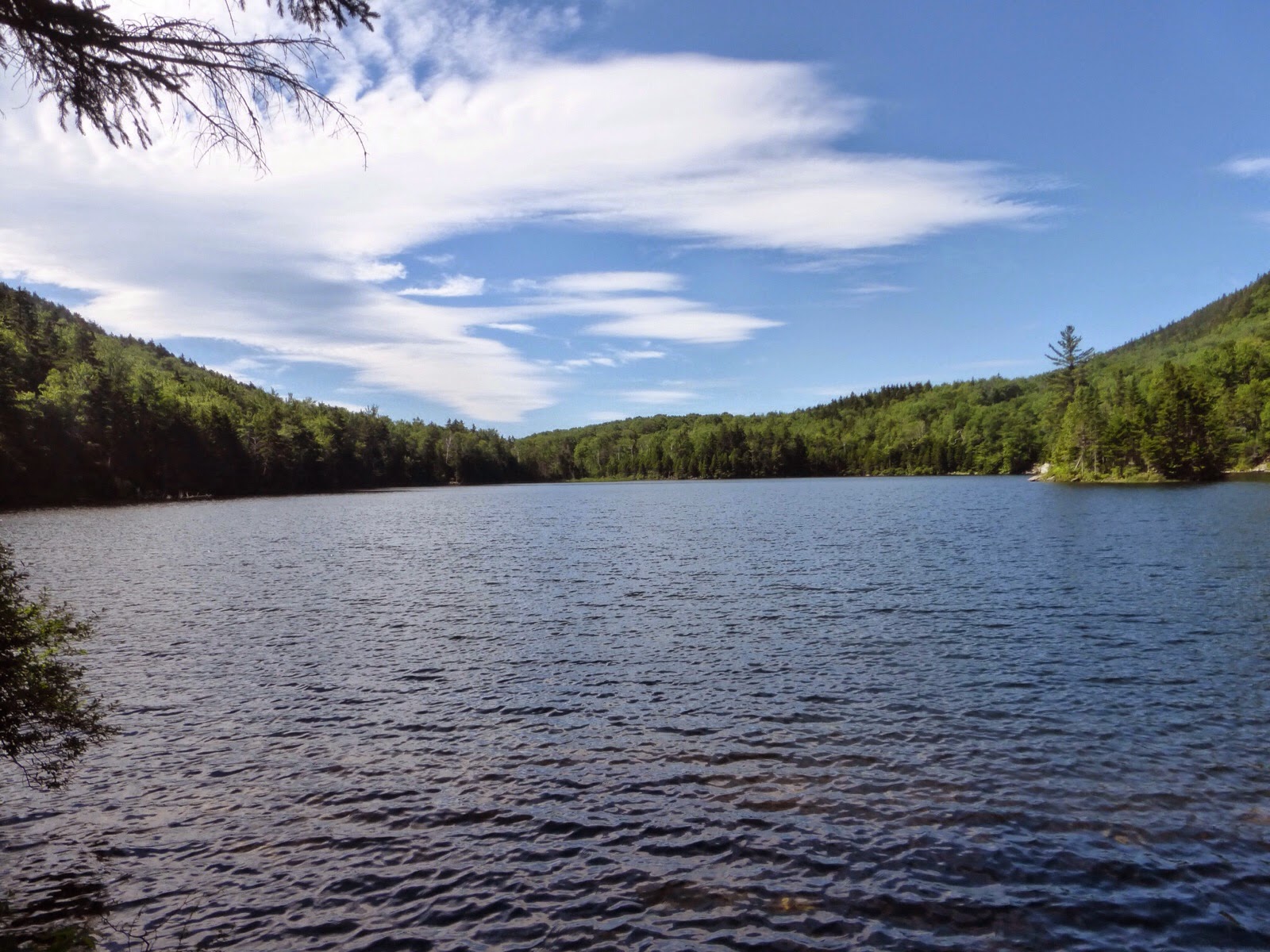 A lot of the day was also in spacious pine forests, which I love. It felt like the trail was trying to apologize for last leg and show me how enjoyable it could be. I was still apprehensive and on guard for it to change at any moment, but most of the day was really smooth hiking! It reminded me of a comparison I remember from the the PCT that LoveNote and Meow Meow would make to the trail as being a “bad boyfriend.” The trail would be terribly draining, but we’d still continue remembering the good times and hoping for their return. Knowing how good it could be, we’d tolerate probably more than we should and every so often it would treat us to a great day or moment. Just enough to pull us back in for more torment…I’m on to you AT! Physically, the trail was pretty great today and the weather was pretty good too. In the 70s and a nice breeze again, but the humidity is definitely rising as storms may be possible tomorrow. 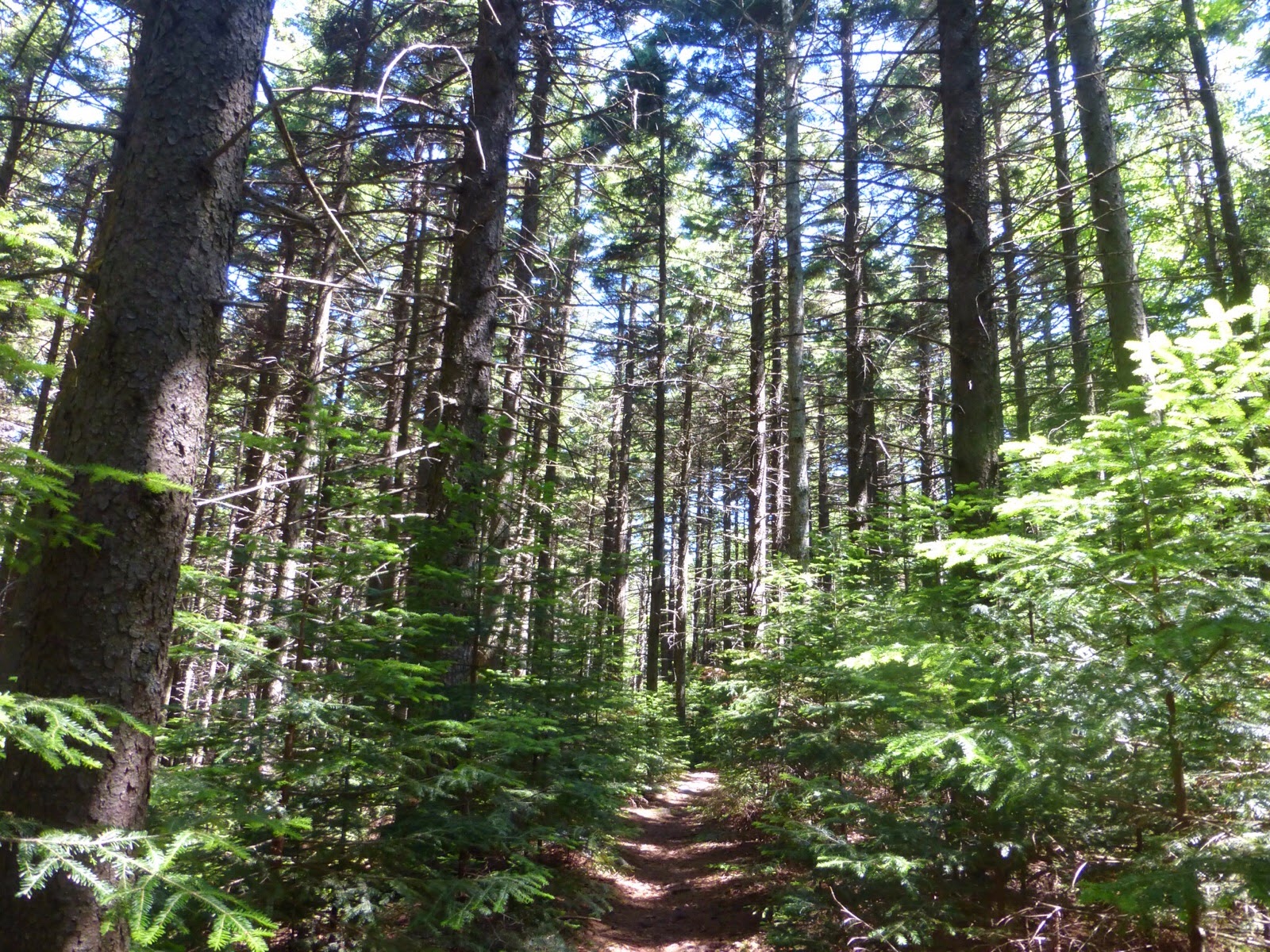 I’m still down on the lack of views and the day felt like it dragged as I’ve gotten tired of seeing forest with few views for the past 80 days. There were a few views that lasted a couple seconds each as I was able to pause and look through parted trees. 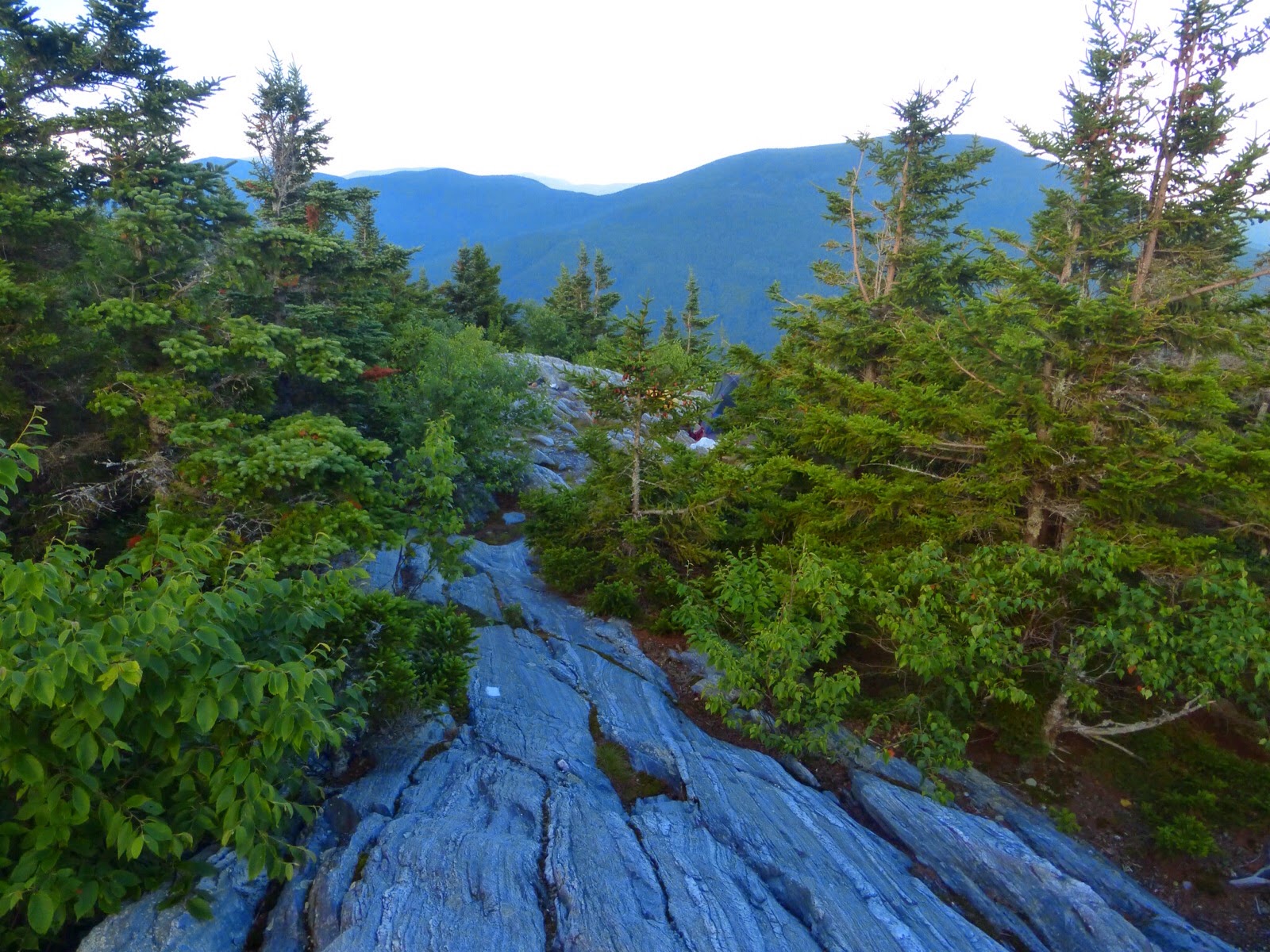 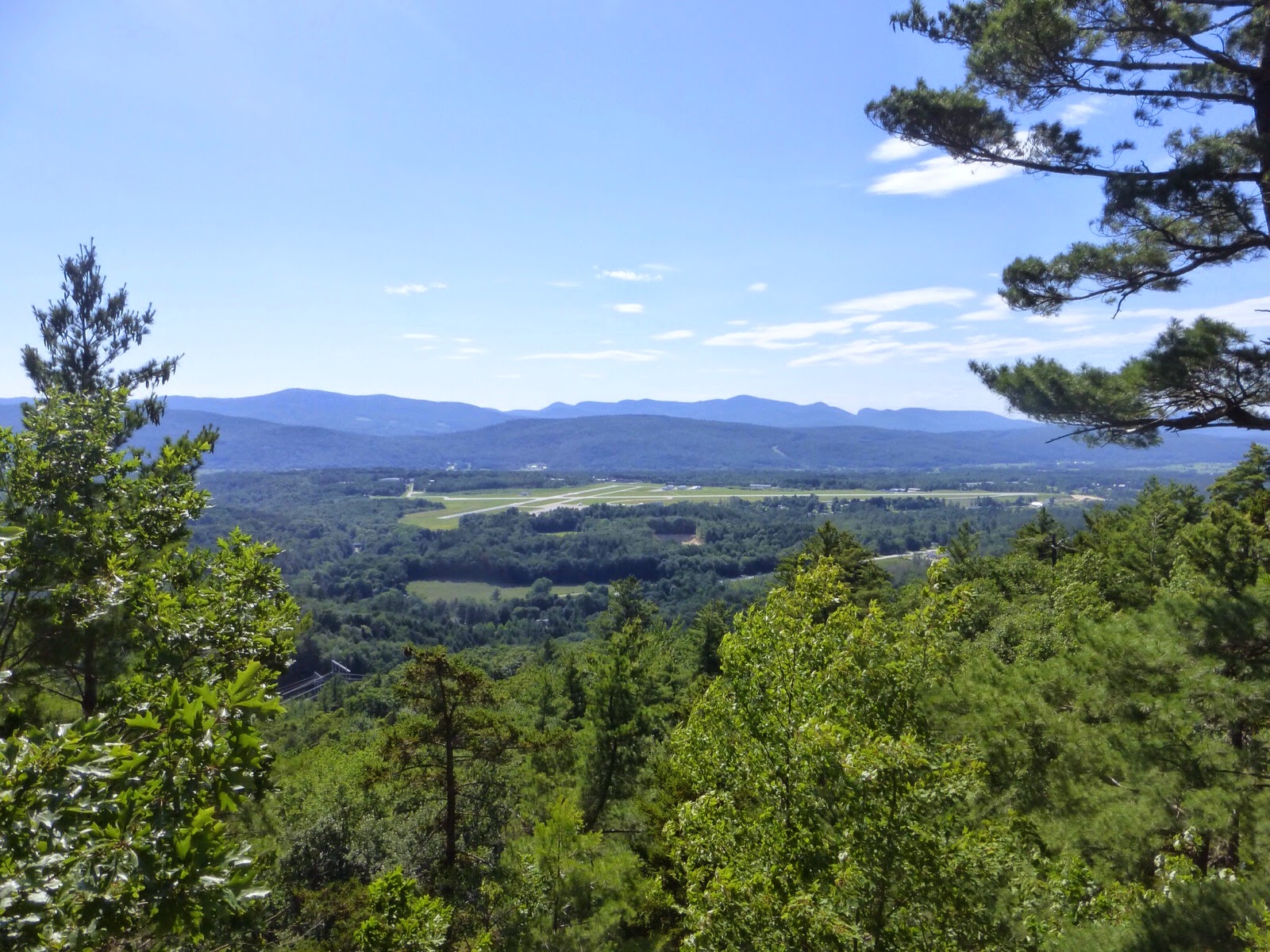 There were some day hikers and Long Trail hikers on the trail. I saw a couple thru hikers and even two southbounders today, but was mostly to myself for the day with conversation at a total of maybe 15mins over the whole day. The other day I finished the audiobook of Night Circus and thought it was average. I could see the magical stuff in a fantastical movie, but I wanted more out of it in the end. I started a new audiobook today, Desert Solitaire by Edward Abbey. It is his accounts and thoughts from his experiences of working in Arches National Park in the late 60s just as the government was pushing to give the public easier access to the parks in hopes of increasing tourism to the parks. It was fun to envision nice scenery completely different from the monotony I’ve been walking through and is a nice change. The next book I plan to listen to is Abby’s Monkey Wrench Gang. I want to thank Kristi who helpedd to get all these books in audio format for this hike. They’ve been a life saver! Both these books are set in the Canyonlands of Utah and were apparently the inspiration for a very challenging cross country trail called the Hayduke Trail which has caught my eye as a possibility in the future if things align to do it with a hiking partner.

There was a unique part of the trail today where there were tons of little cairns around large boulders right along the trail and it was probably my favorite part of the day. 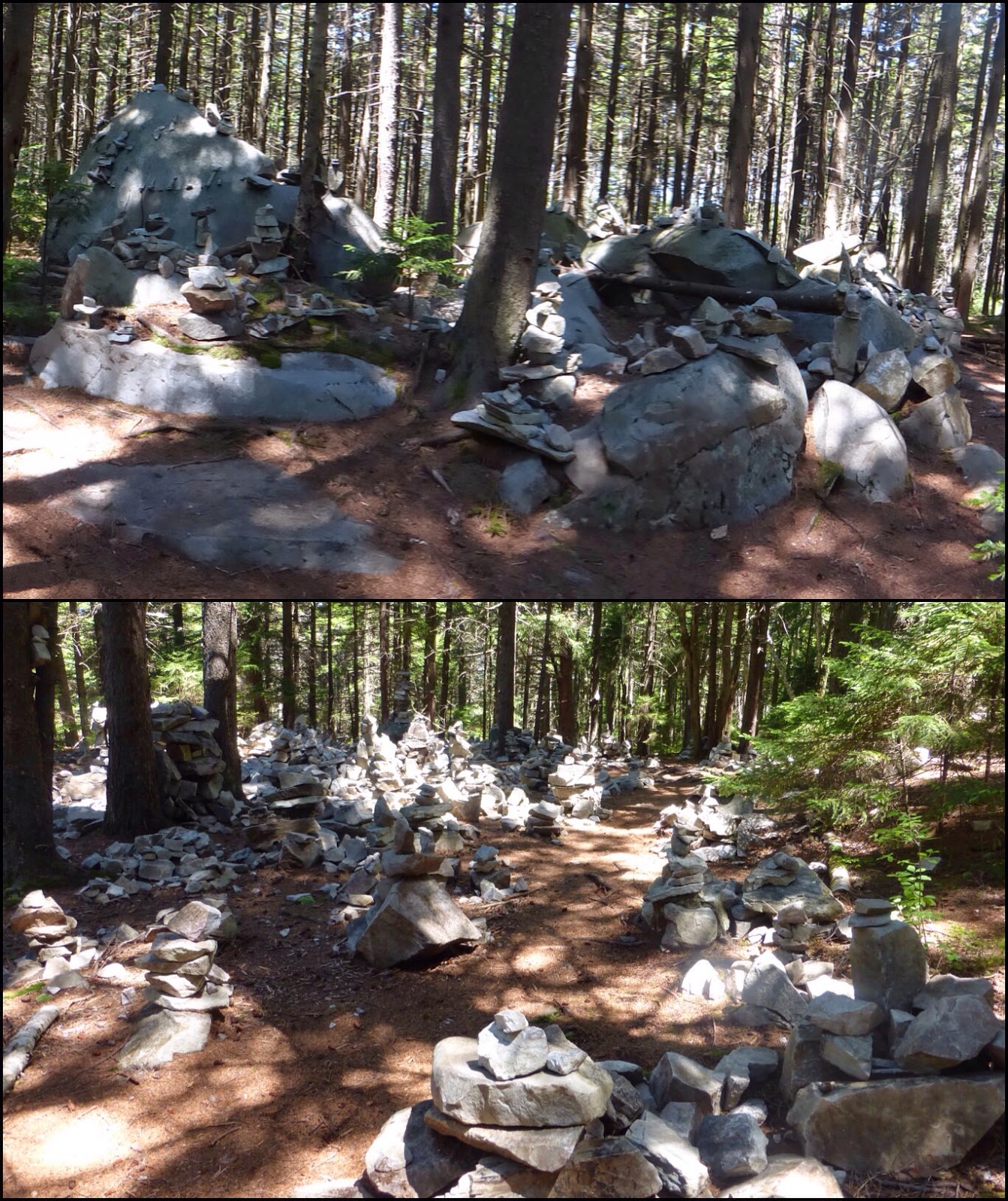 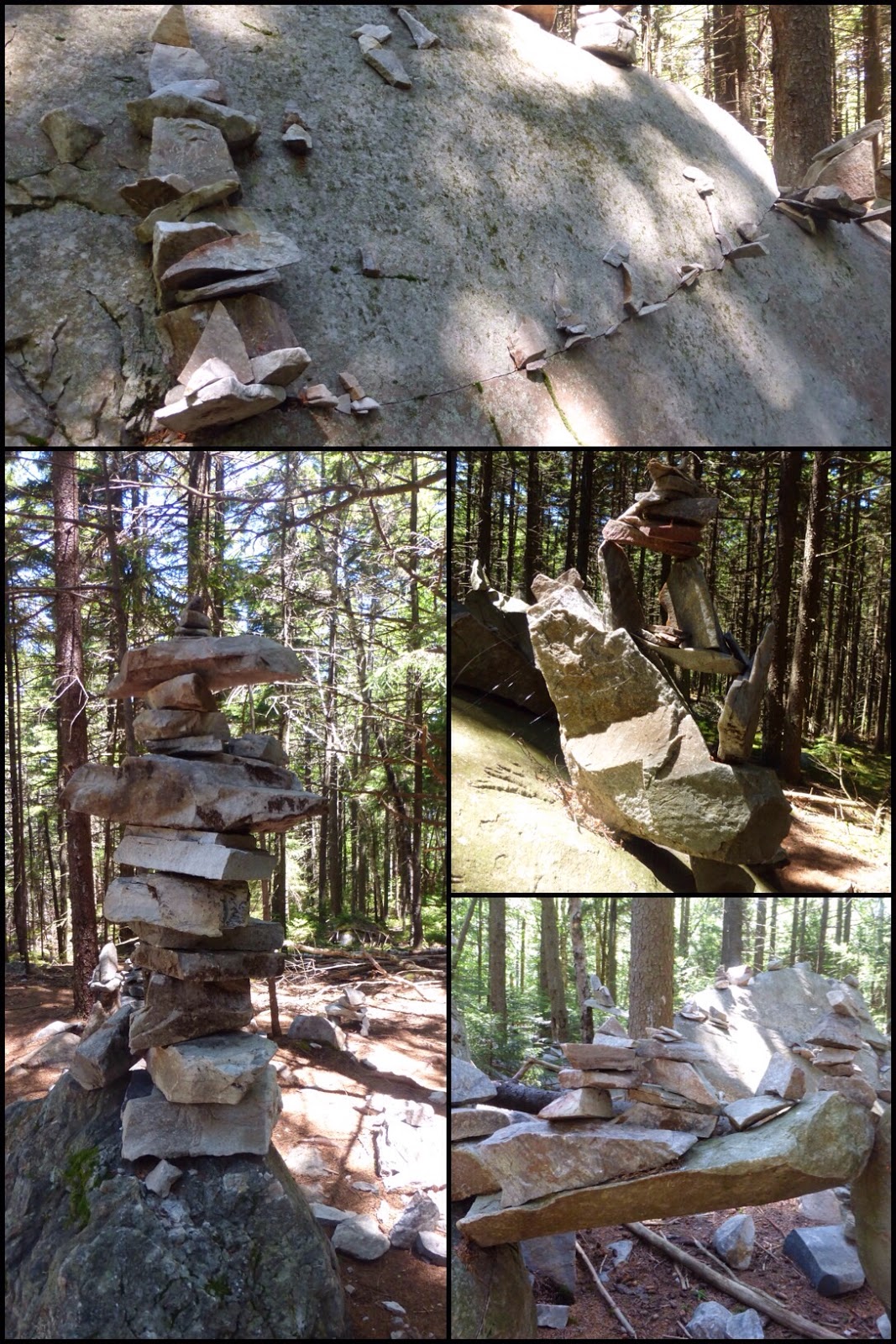 By lunch I was happy to have cruised so much and made the decision to go on to the shelter around 26mi for the day. Once I make a decision, I like to follow through, but I was discouraged at lunch to find I was still 15mi away after 1pm and that I’d have to keep a good pace to make the miles by my desired 6:30pm end time. I really thought I had made better progress in the morning and was confused, but accepted it wanting to hike the miles today when it was nice hiking weather and figuring I must have walked slower with the audiobook or something. I did get to eat at a great brook and it was a nice break. 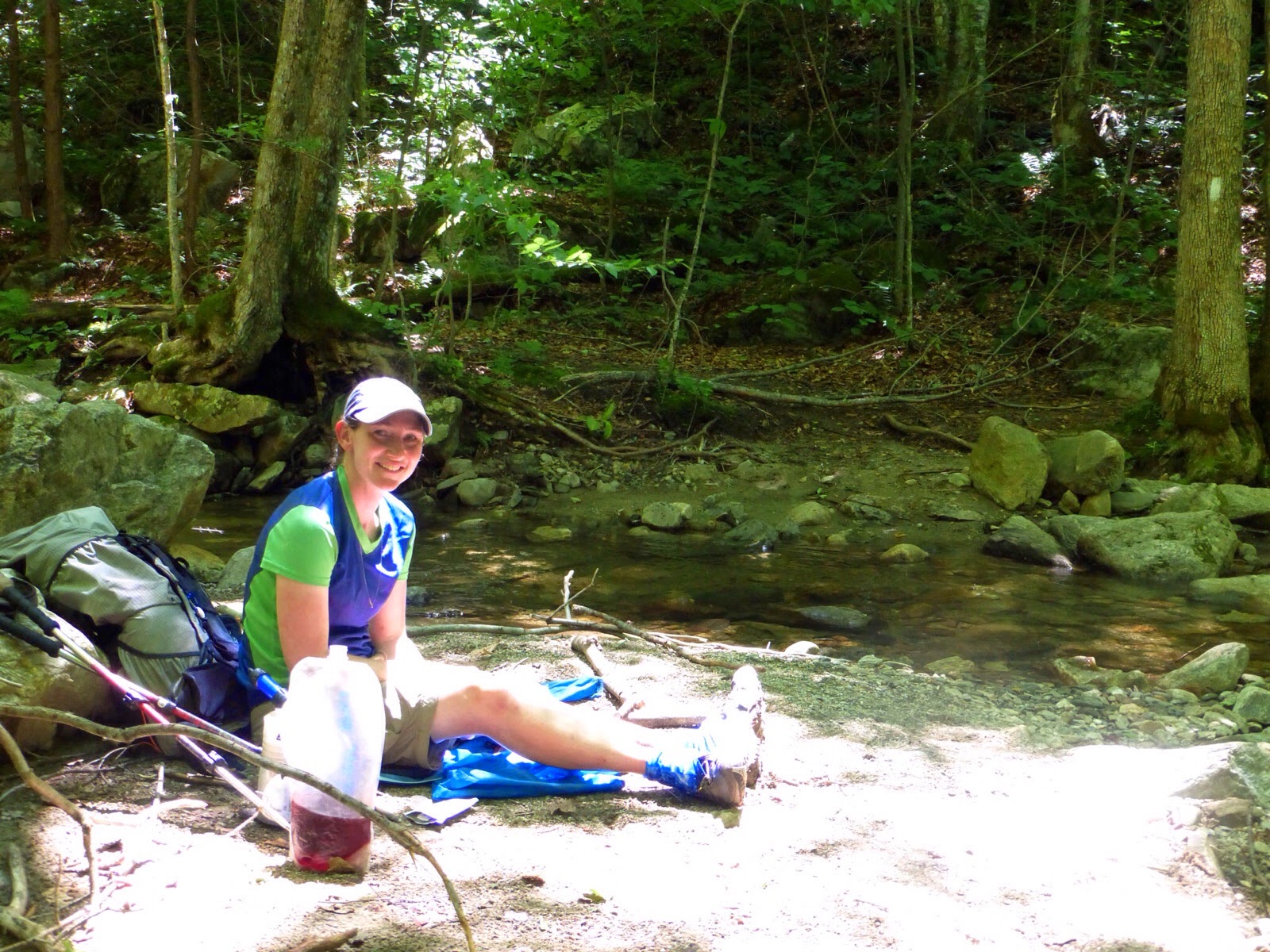 The second half of the day had more steepness and wore me out towards the end, but I kept my eye on the goal refusing to give in on the decision I made. I have been oddly gassy since leaving town yesterday and was getting a side cramp on downhills that was also discouraging so I hope it doesn’t continue tomorrow. Just before reaching the shelter, there was a 1.7mi detour that was partially a road walk and added .3mi to the day. As I walked that road, I did the math on my exact mileage to find that I was totally mistaken on the distance today! I was not doing 26mi, but 28.9mi! Ugh, I’m an idiot and that explains why I felt like I should have hiked more miles…because I did hike more miles! I got to the shelter (and nice steam side campsite!) at 6:45pm. A couple of Long Trail hikers were there and Geared Up arrived who had also stayed at the Green Mountain Hostel the other day. He is from Portland too and did the PCT last year. Yes, he does hike in a tie he picked up at a thrift store down south just for fun. I may see him more in the next two days as we seem to be on the same schedule to hit town. 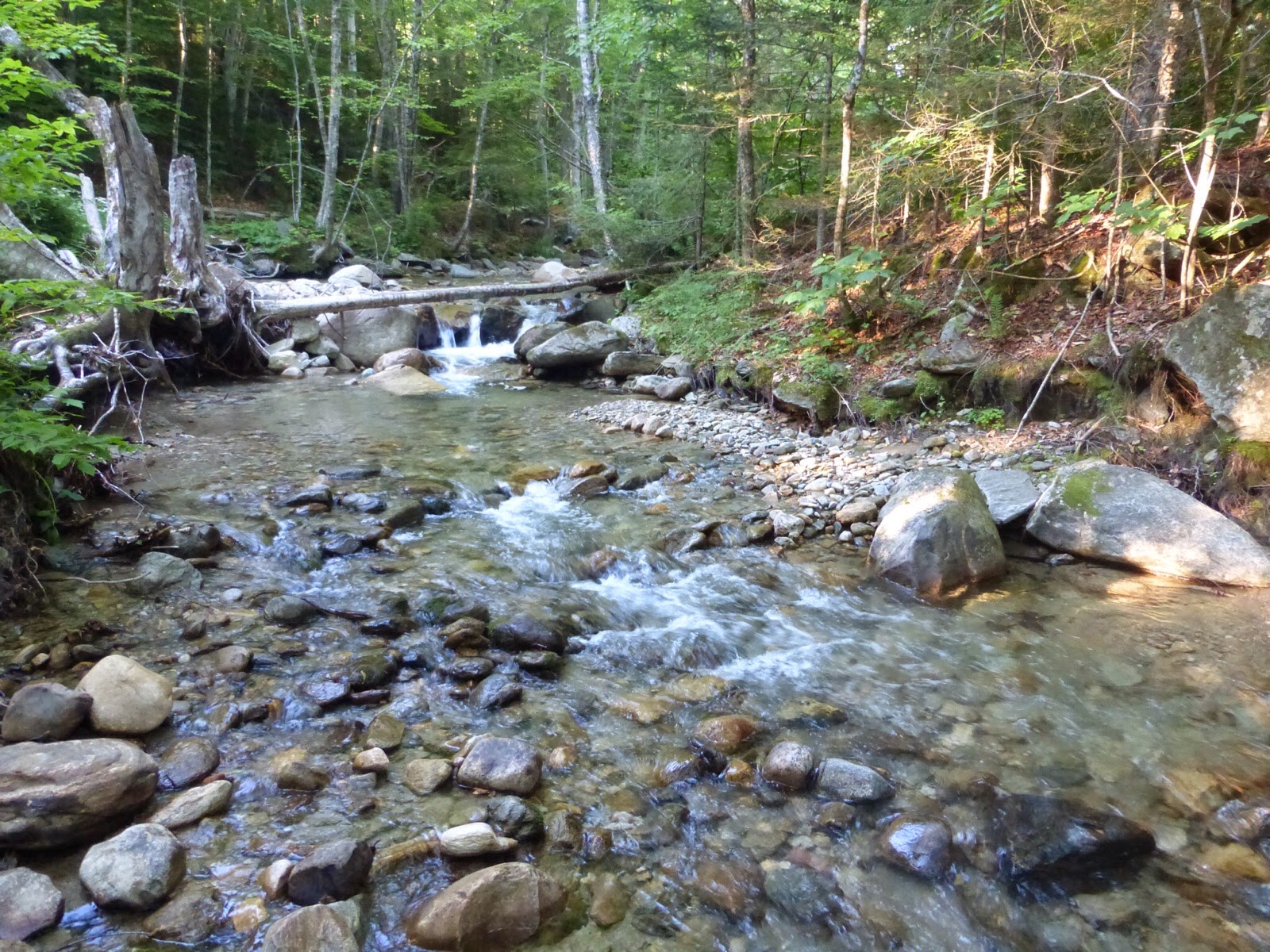 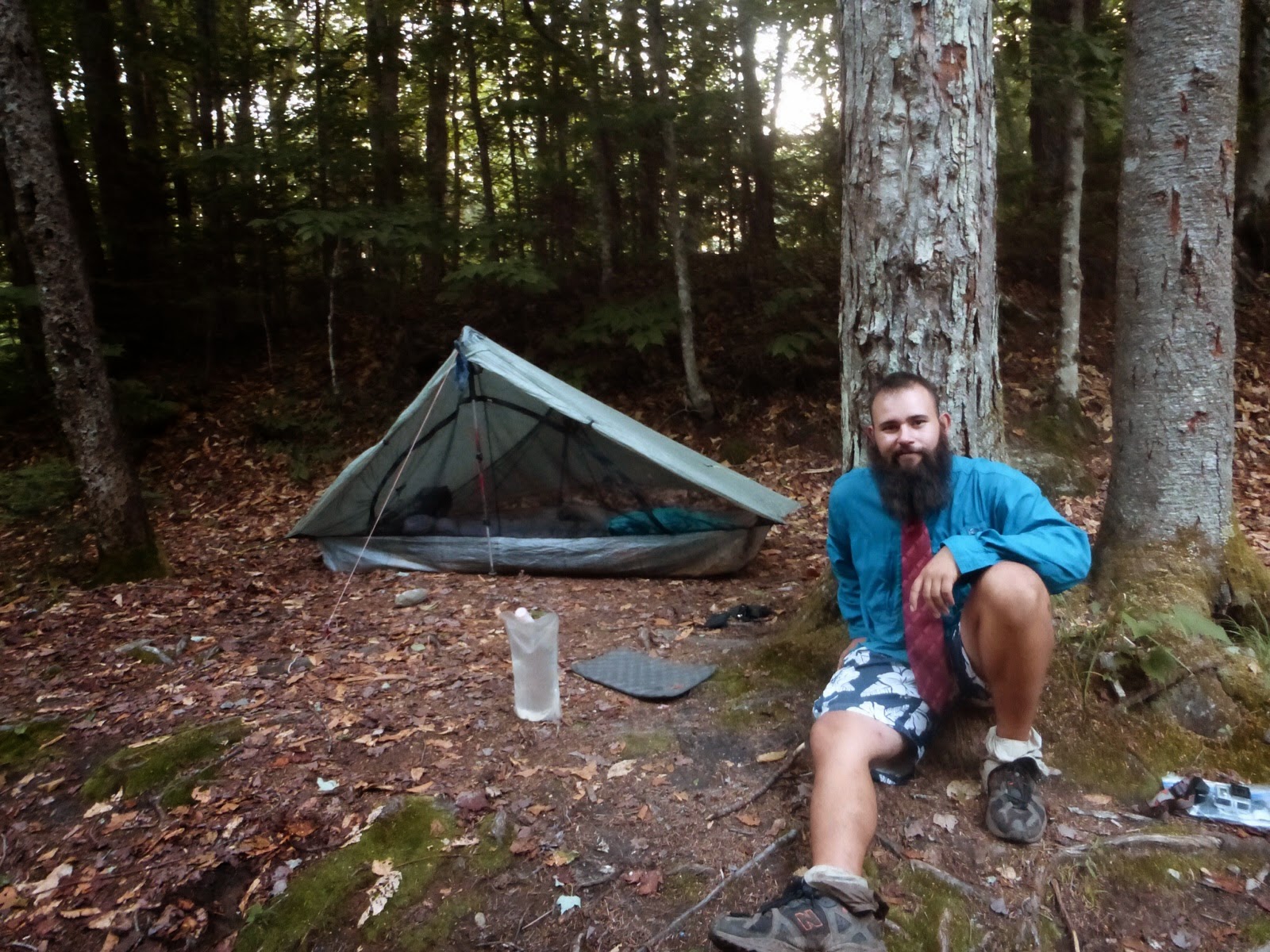 Now that I did these miles today, it sets me up for two 25mi days and then a nice short 6mi into town on the third day, so I’m going to try to stick to that…really! Looking forward to a good night of sleep in cool weather and the white noise of the stream.