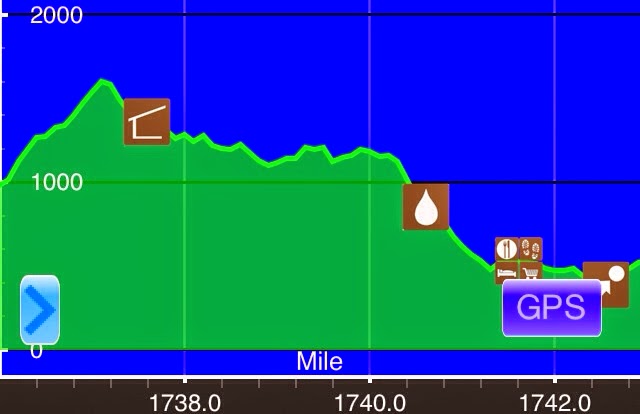 It started raining around 10:30pm last night and then it thunderstormed on and off until midnight…or at least that was the last time I checked the time and I finally fell asleep. I was camped in a good spot under a lot of protection, so I was fortunate that the wind and hard rain was filtered as it came through all the tall trees around me. It seemed to rain on and off in the night as I kept waking up and didn’t sleep very much. I was in a deep sleep and surprisingly slept in this morning waking at 6am. I was on trail by 7am and it was a short hike into town, so I was excited to relax for most of the day. The sunlight cutting through the dark wet trees was really cool this morning.The beams of light cutting through the trees made for some great morning hiking! 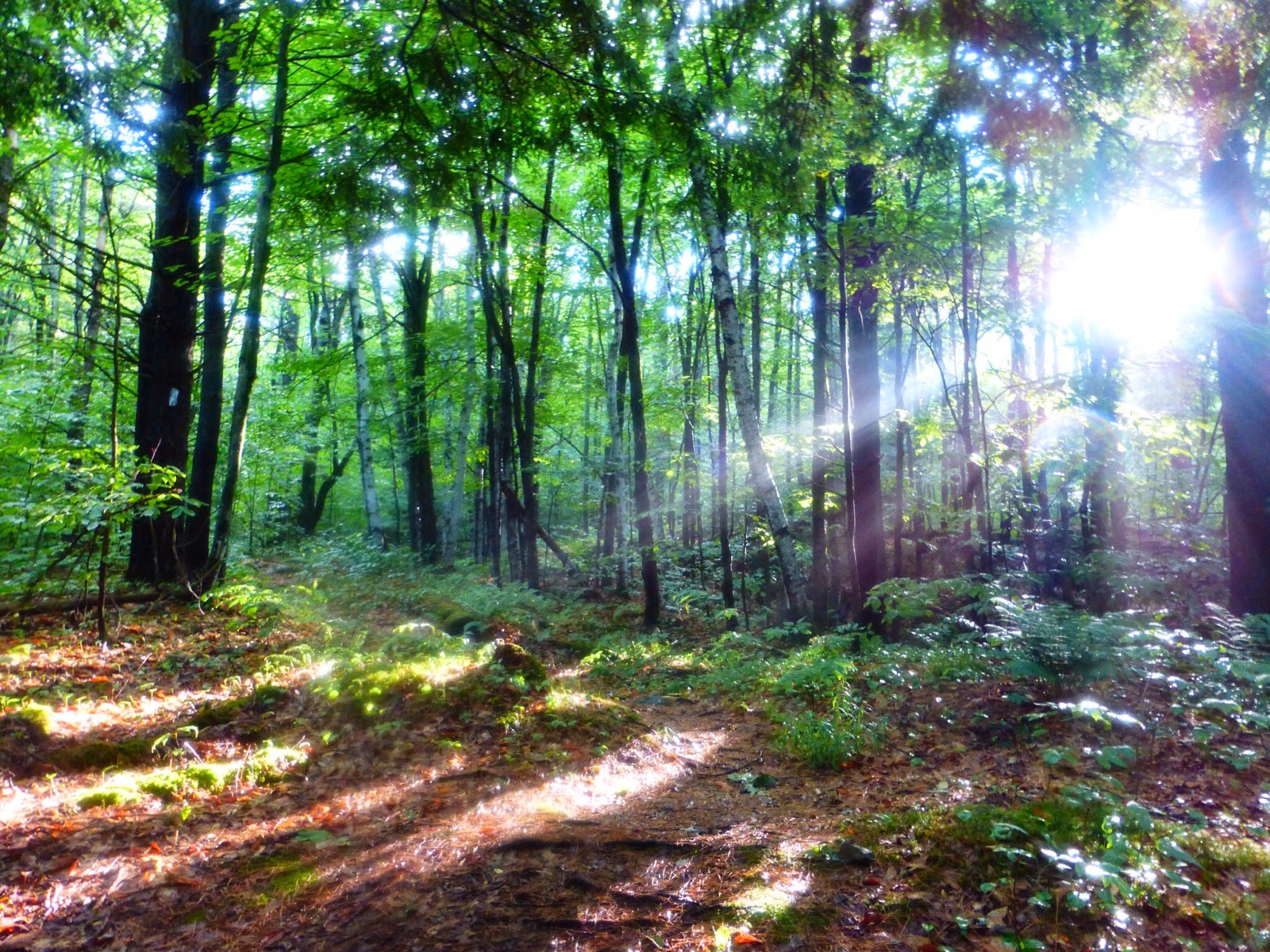 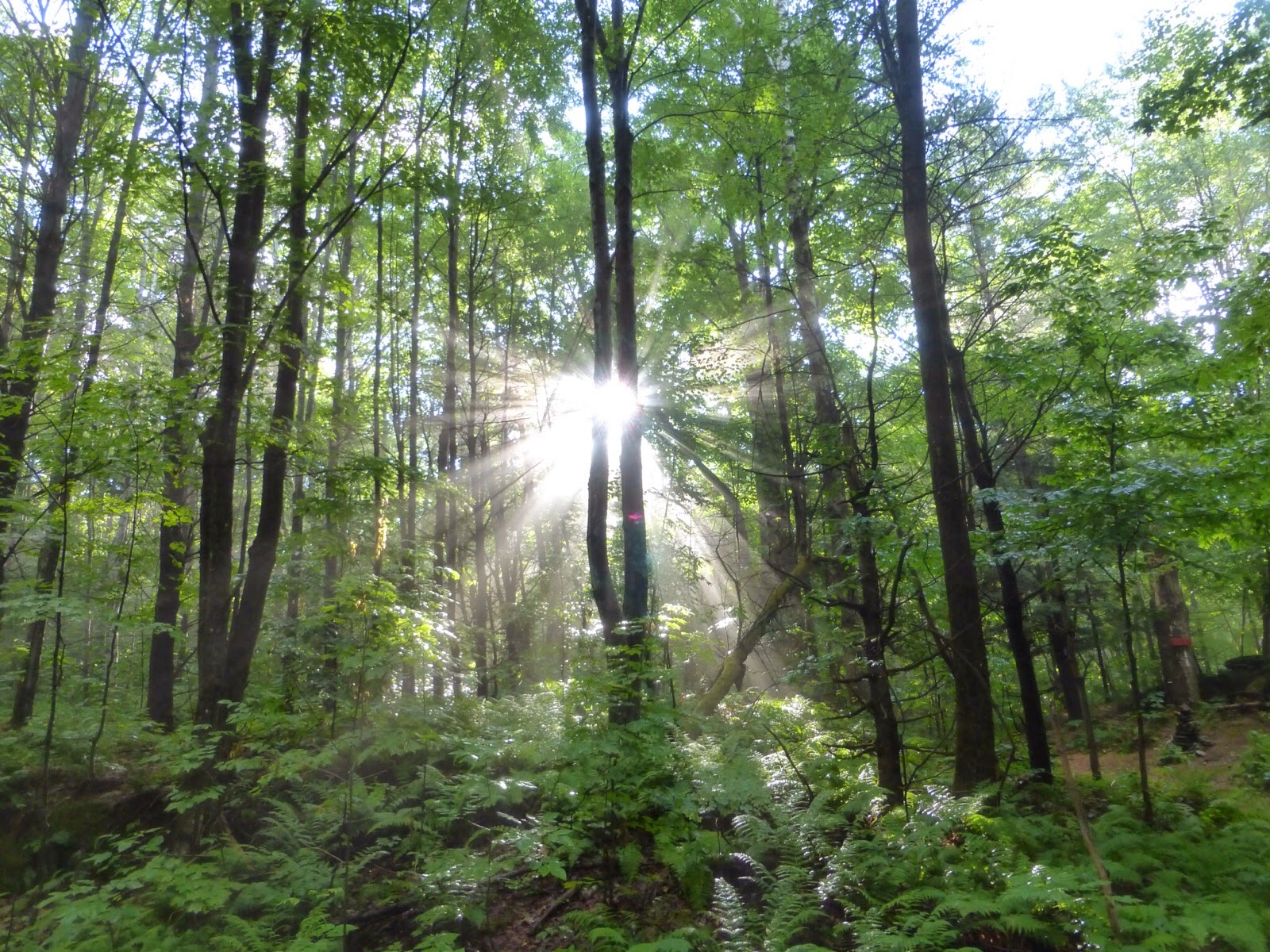 I had camped about 1.5mi south of a shelter, so I ran into other hikers as I hiked down. Two of them were thru hikers and one was a woman named The Machine(she hikes steady all day with little breaks). We hiked into town together as the final 2-3mi were on roads through the towns of Norwich and Hanover. Almost immediately, there were homes along the trail offering trail magic and a list of people in town who provide shuttles and host hikers. It was a very hiker friendly town and they had wonderful treats to distract us. This was the most quenching watermelon I’ve ever had! I love the Keen boots with flowers planted in them! 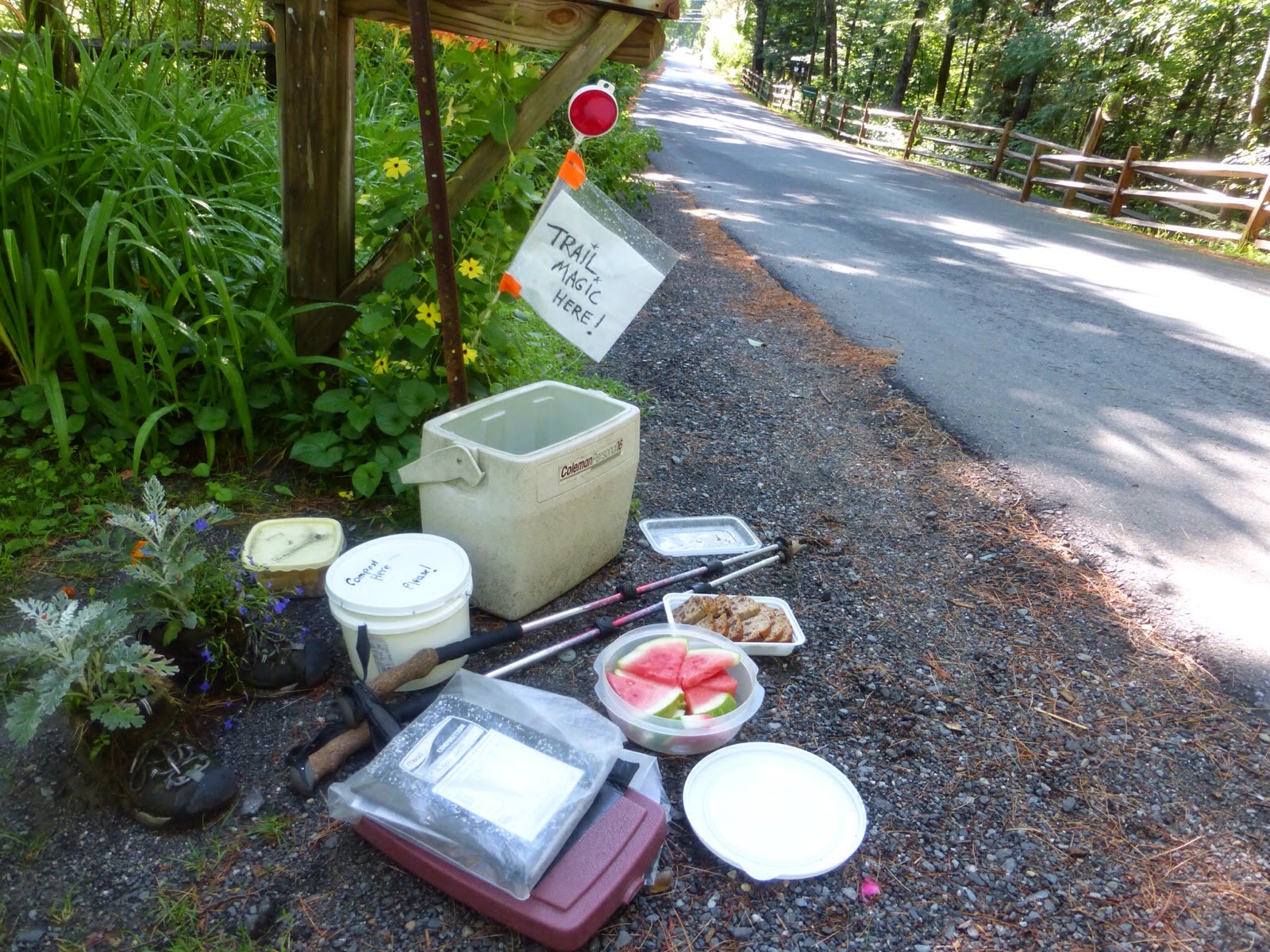 Then we hit the border into NEW HAMPSHIRE baby! FINALLY! I swear Vermont felt like an eternity and it was mostly because of the rain, heat, and humidity. I found it amusing that the border of Vermont and New Hampshire is the Connecticut River. 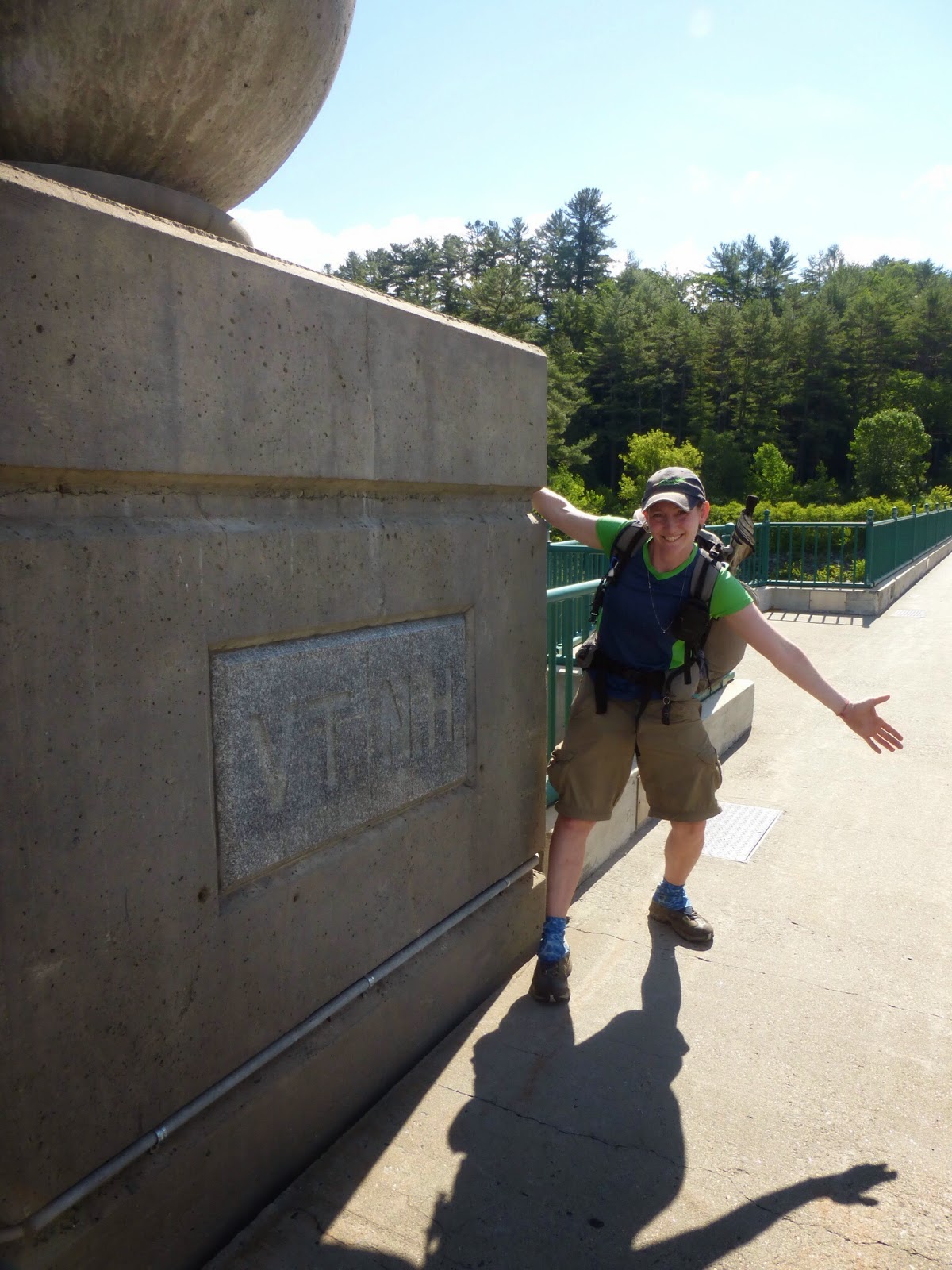 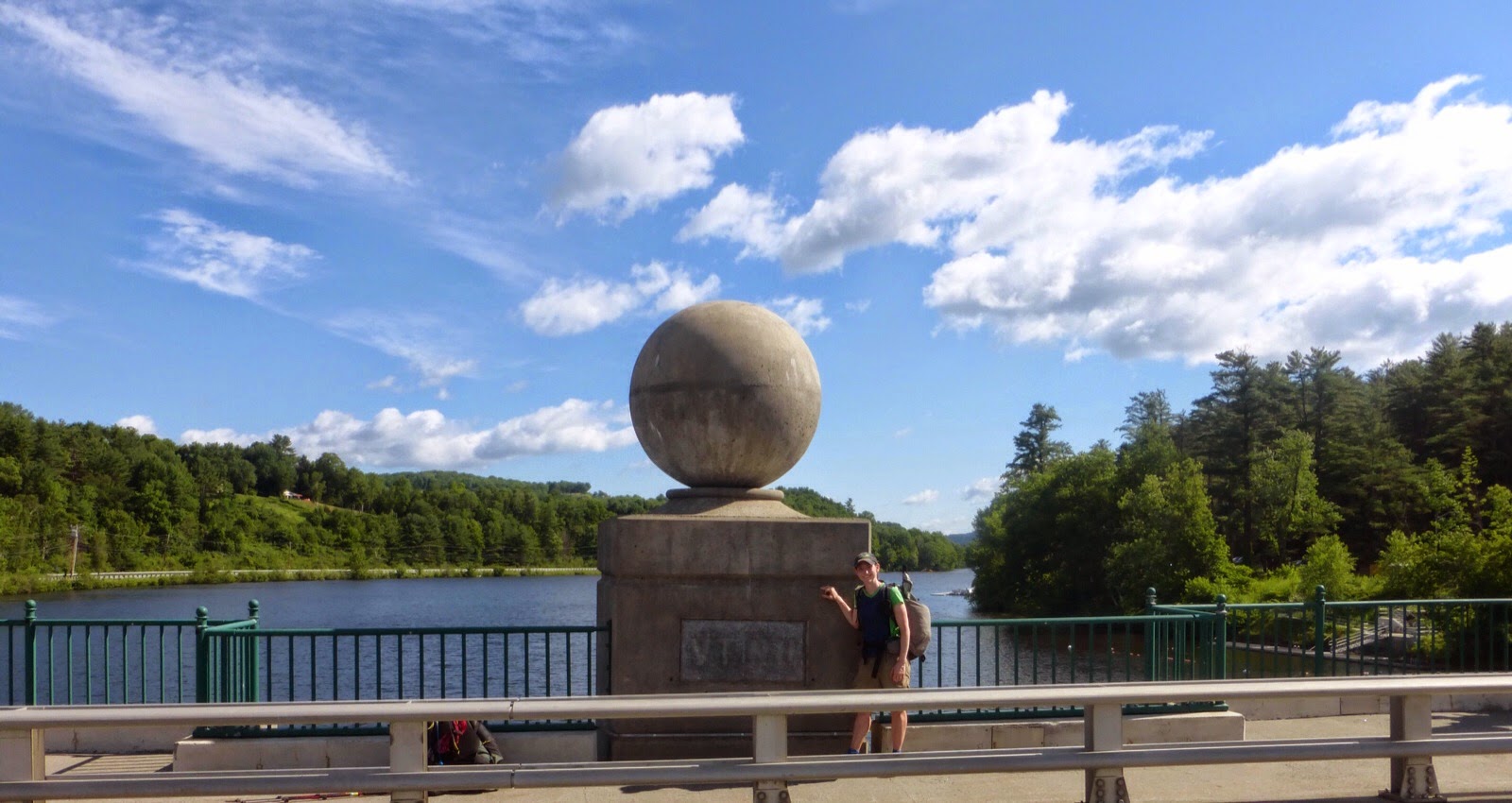 The trail then went into Hanover and right through the campus of the ivy league university of Dartmouth College. I really like big college campuses and find them inspiring. The trail went down the campus main street which was quite high end. The Machine and I had breakfast at the recommended spot, Lou’s and they even give hikers a big free donut. Notice the milkshake I had with breakfast. It was perfect! 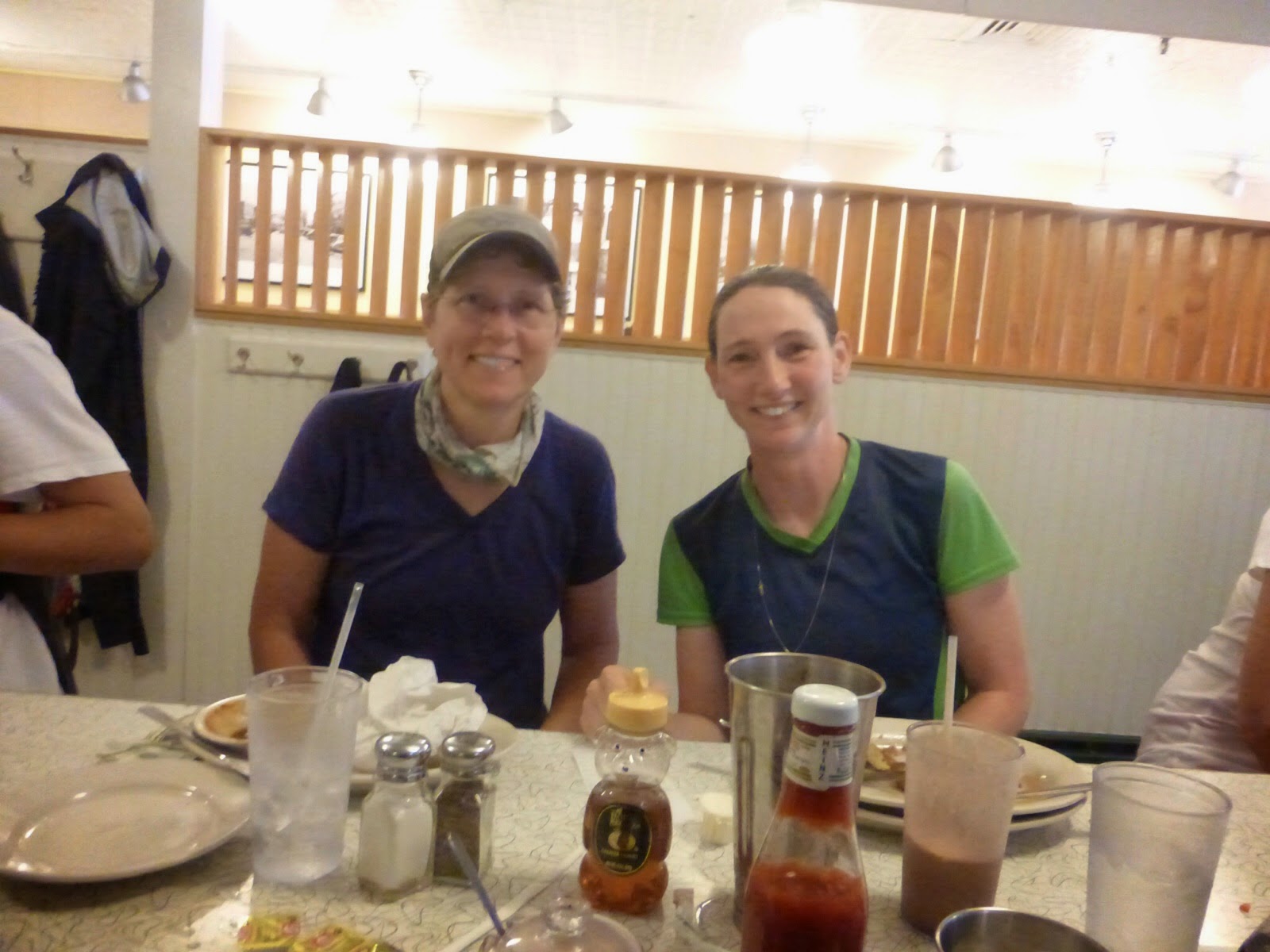 The Machine and I went our separate ways and I continued hiking the trail on through the rest of town. I saw a Subway and excitedly grabbed lunch for later and for tomorrow. Then the trail went by a nice grocery coop where I resupplied…the most expensive resupply I think I’ve ever had. I totally should have shipped a box as it would have cost less and I would have gotten what I wanted. Oh well. 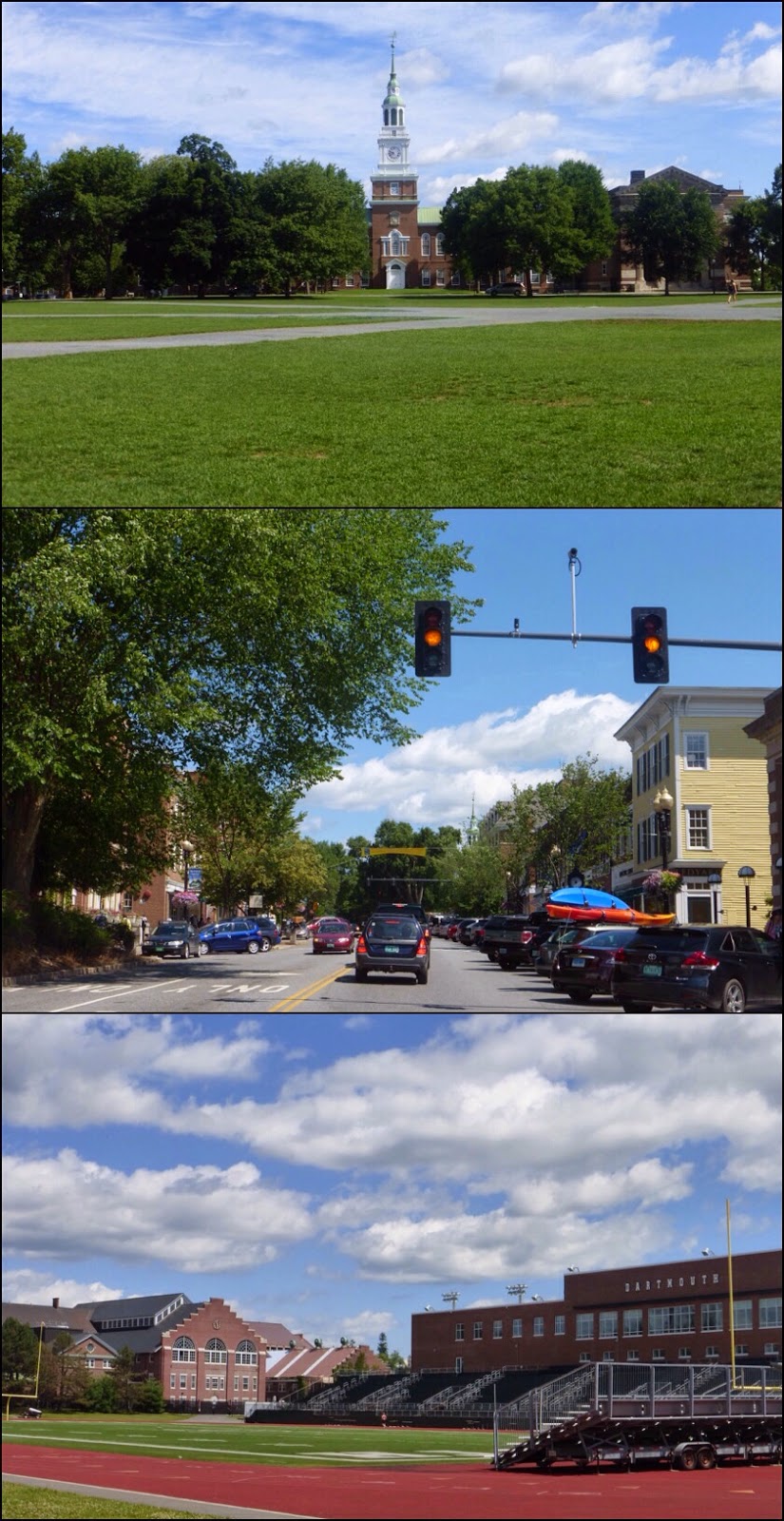 I was gifted a room at the Marriott in the neighboring town of Lebanon and they shuttle guests anywhere they like unlimited times during their stay. They picked me up at the grocery store and I was at the hotel by 12:30pm. A true nero! I want to thank Amy who had extra points that made this luxury possible. Check it out, I have a wonderfully comfy bed and a nice big lounge chair to watch Netflix while I watched a storm pass through. I was giddy to be inside as it rained in sheets that blew across the parking lot below. It’s been a long last couple legs and having this time to relax on my own is just what I needed. THANK YOU Amy! 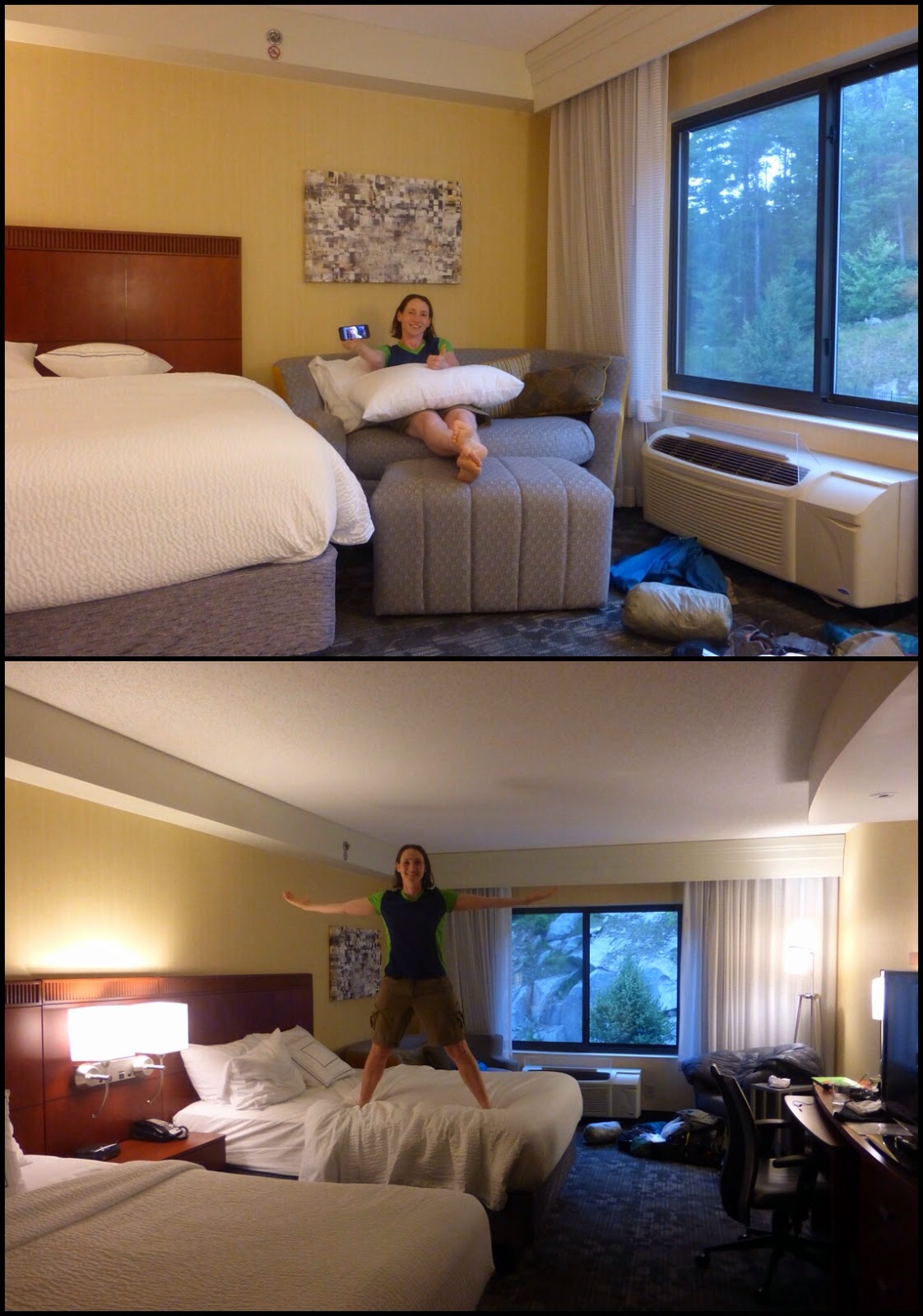 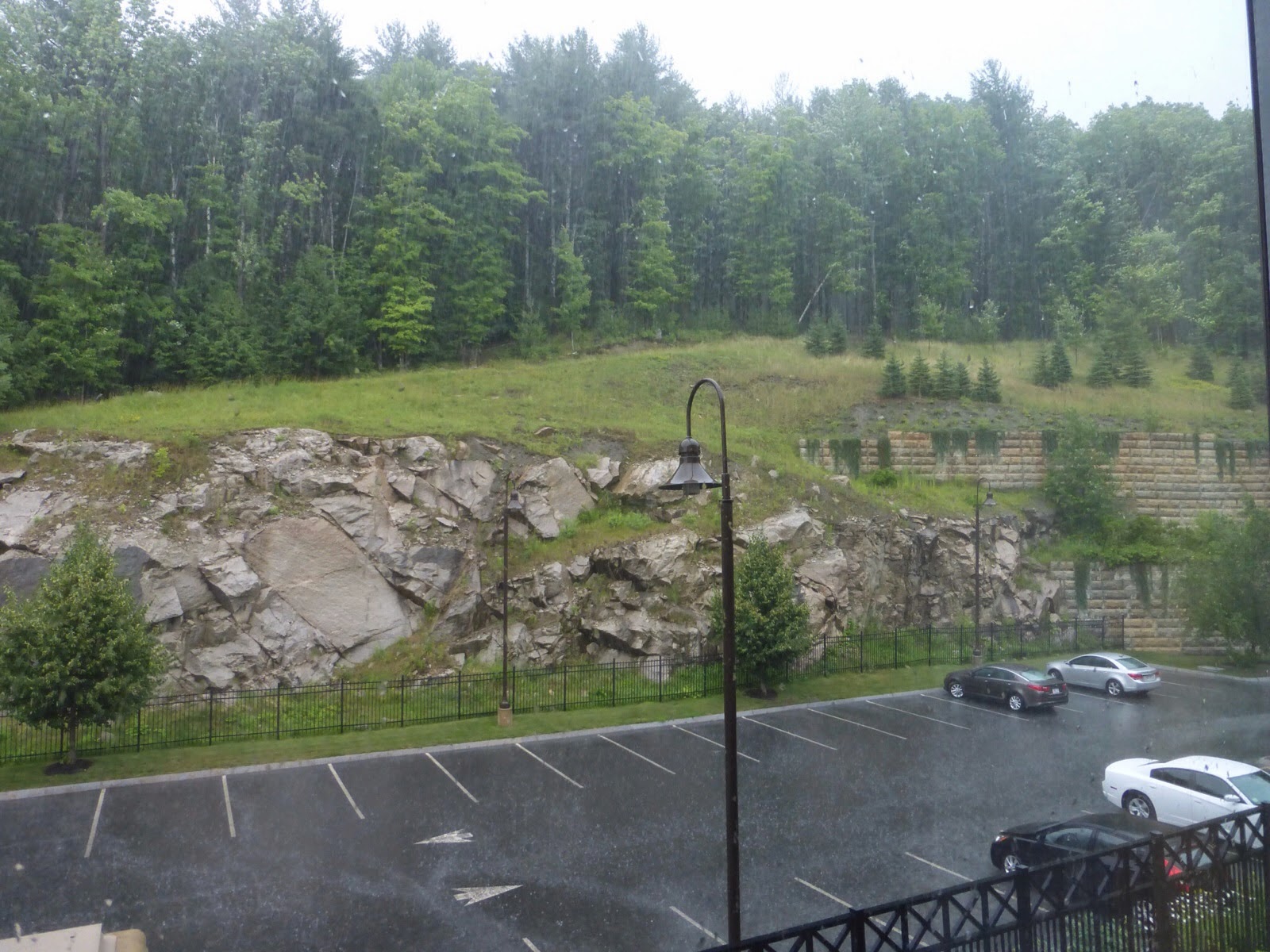 The room has two beds as I had hoped that Jett Cat would catch up by now, but she found out that her decreased energy was due to a sinus infection last week. She had to take a zero and she is now 2-3 days back, dang! We are both quite bummed about that, but that’s how it goes on the trail sometimes. You never know when you might see someone. I have a planned zero at the end of this coming leg, so there is still slight hope and we are keeping in touch. We both have been hiking alone a lot and I’m close to thinking that if she can get within a day, I might even take an extra day off, so we will see.

I did get some great social interaction with my sister and the nephews today. Look at all this adorableness! 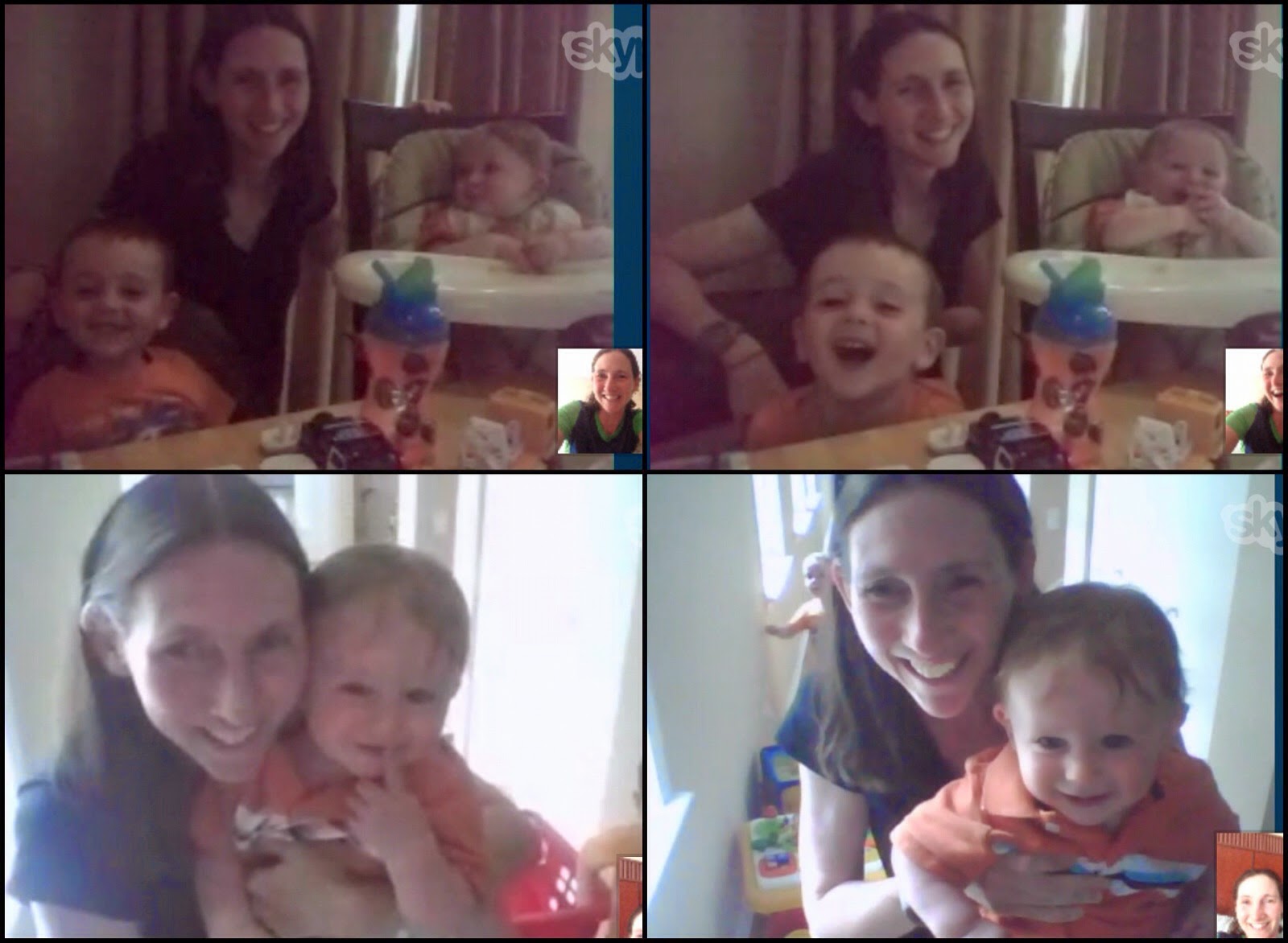 I almost took a nap today, which NEVER happens, but managed to get some chores done until I got a second wind and I got to watch more of OITNB. I headed next door to grab something for dinner and saw the sky and just burst with happiness! I love being able to see the clouds like this and I miss it dearly. I am really looking forward to hitting the Whites in New Hampshire where I’ll get to walk above treeline…ABOVE TREELINE PEOPLE!!! It’s just sad that it’s gotten to the point that a view from a parking lot inspires me more than the “views” on the trail. Bring it New Hampshire, I’m ready!!! 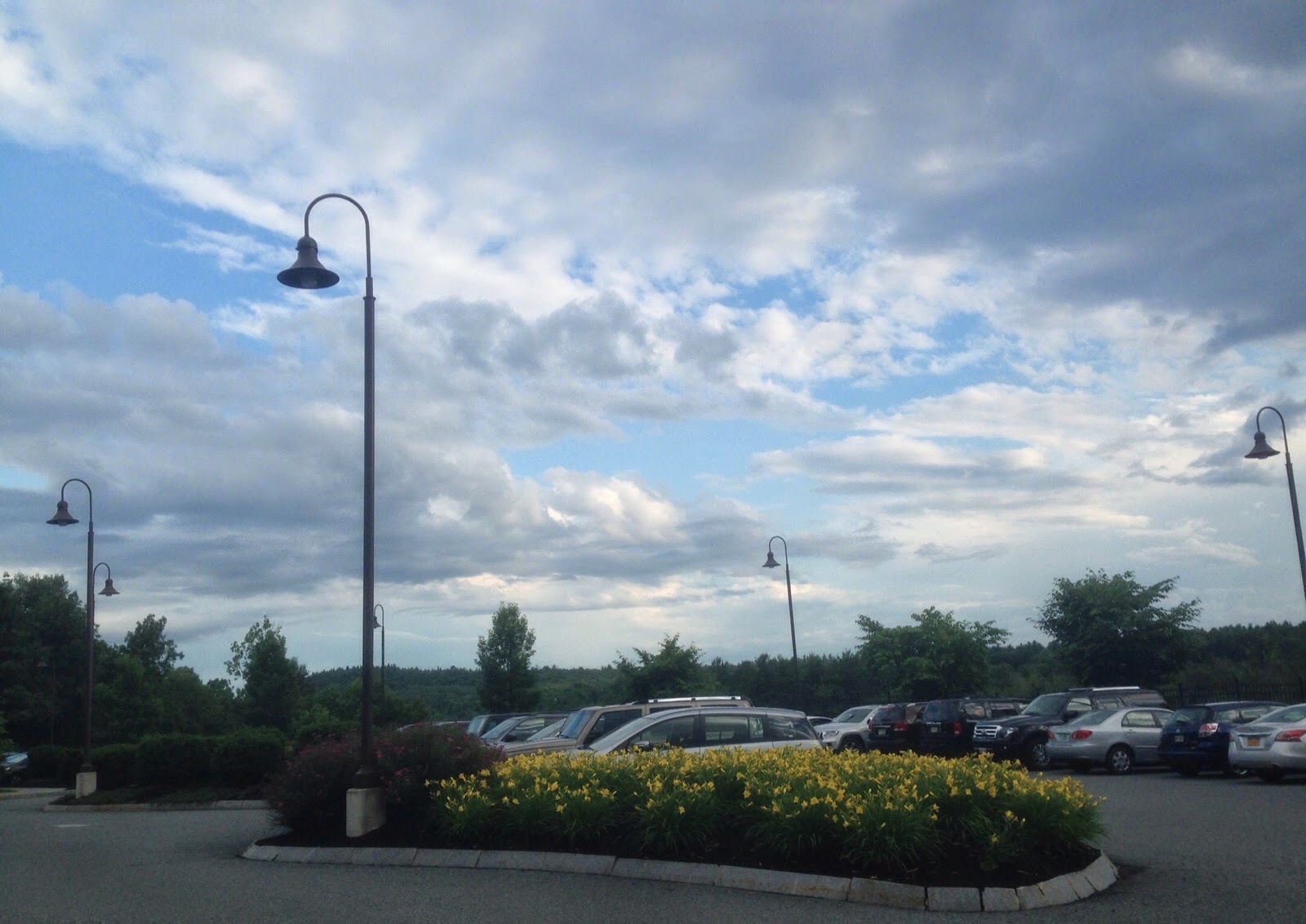 I know many of you have emailed me and I will be catching up on emails tomorrow. I just need a break for tonight. I have the final episode of OITNB and some chocolate pudding cups waiting for me upstairs. Yay!