Day 92: All Is Right In Hiker World 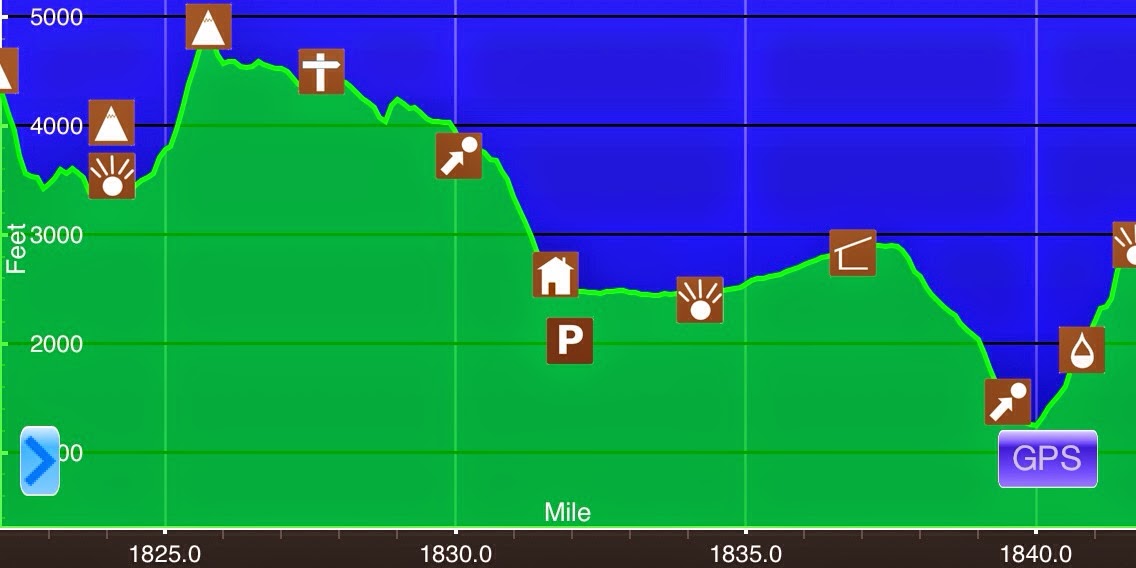 Last night, we decided to let ourselves have a relaxing morning and not leave until 7am today. I woke up wide awake at 5am and pretty excited to hike. I had gotten too tired to finish blogging last night, so I finished it this morning. I could tell that Jett Cat was awake next to me, but that she was doing all she could to be courteous and lay there quietly. I let her know I was awake and we had to laugh that both of us were wide awake so early. We stuck to our guns and relaxed in our warm bags as it had dropped into the 30s last night and was still in the low 40s and foggy this morning. Ninja is not normally an early riser, but she was a good sport and was ready by 7am and hiked out with us. The three of us spend the first hour or so of the day together. One of the first things we came to was a steep rocky descent with water going down it as if it was a stream. I thought it was a stream and that we had gone off trail, but no, it was the trail and it was very slow and cautious hiking until we reached the bottom. 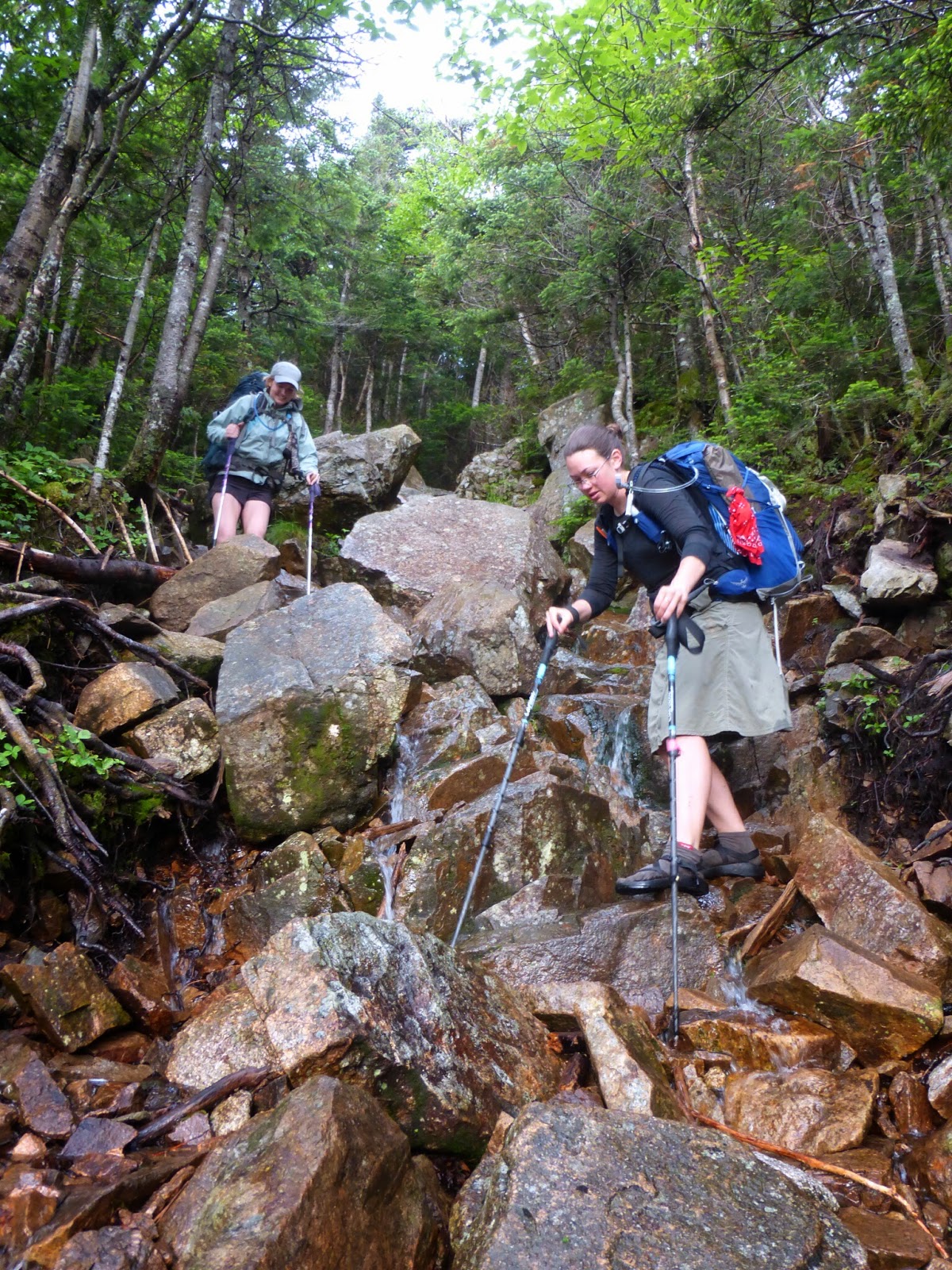 Ninja turned off after an hour or so to attack some of the 4,000 footers before heading home. It was fun to have Ninja join in for an overnight and we will see her again in a few more days as we will once again stay with her and Sweetfish at the end of this leg. The rest of the day was really nice and relaxing for me and Jett Cat. It was a lot of downhill or level hiking today and we made our miles quicker than expected. It wasn’t the long stretches of ridge walking we had yesterday, but there were stretches with views that were nice once the morning fog burned off. 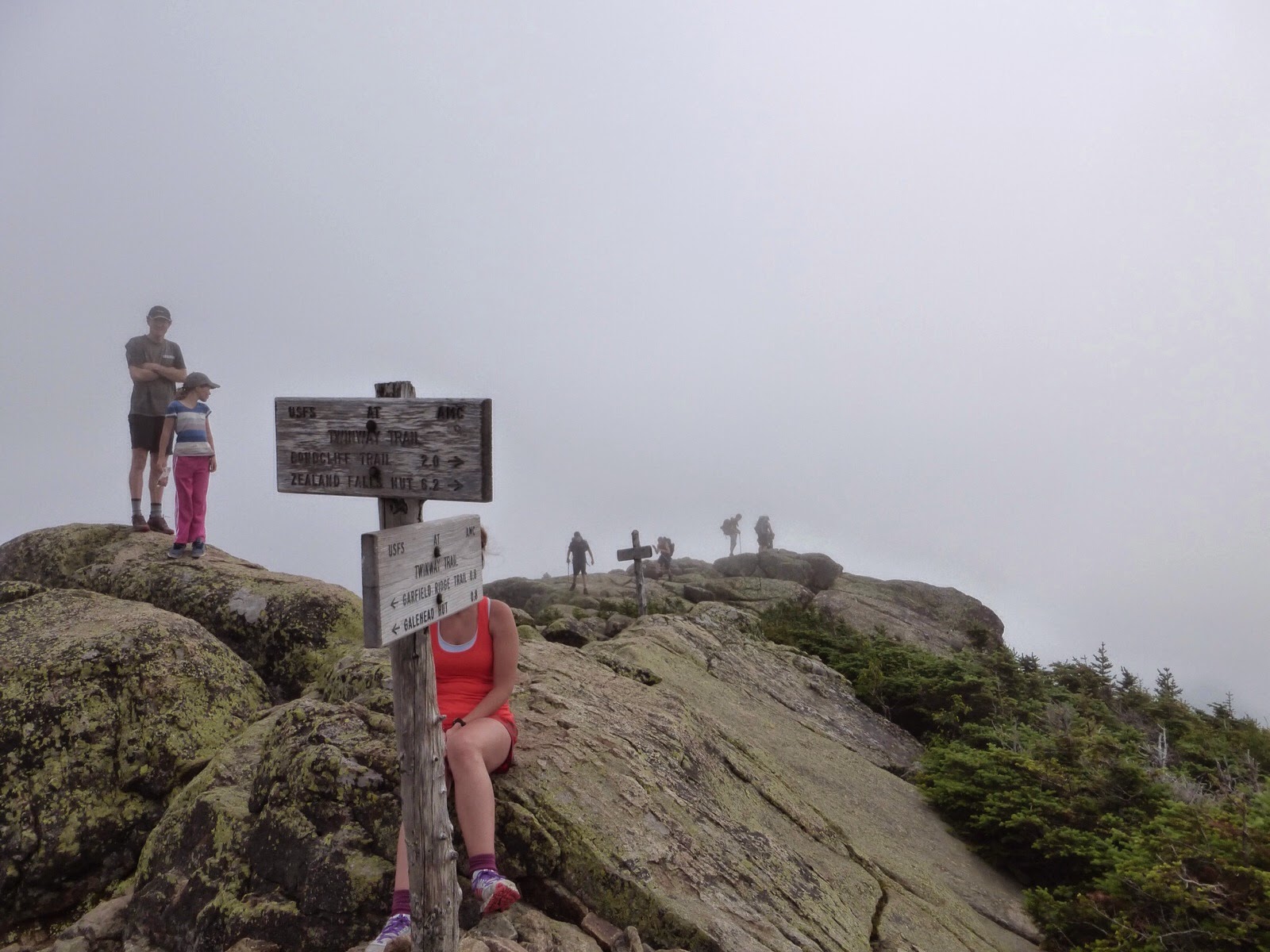 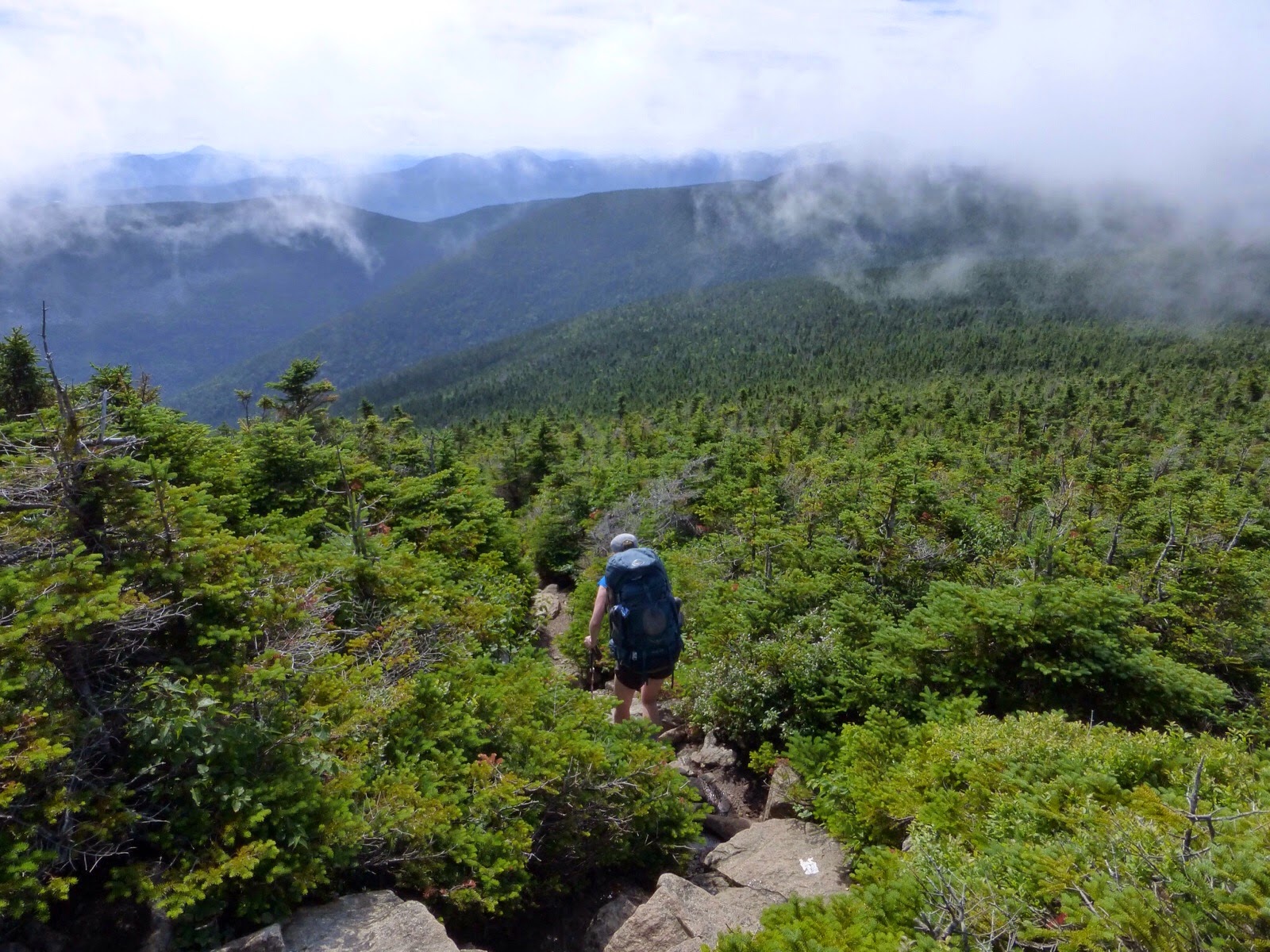 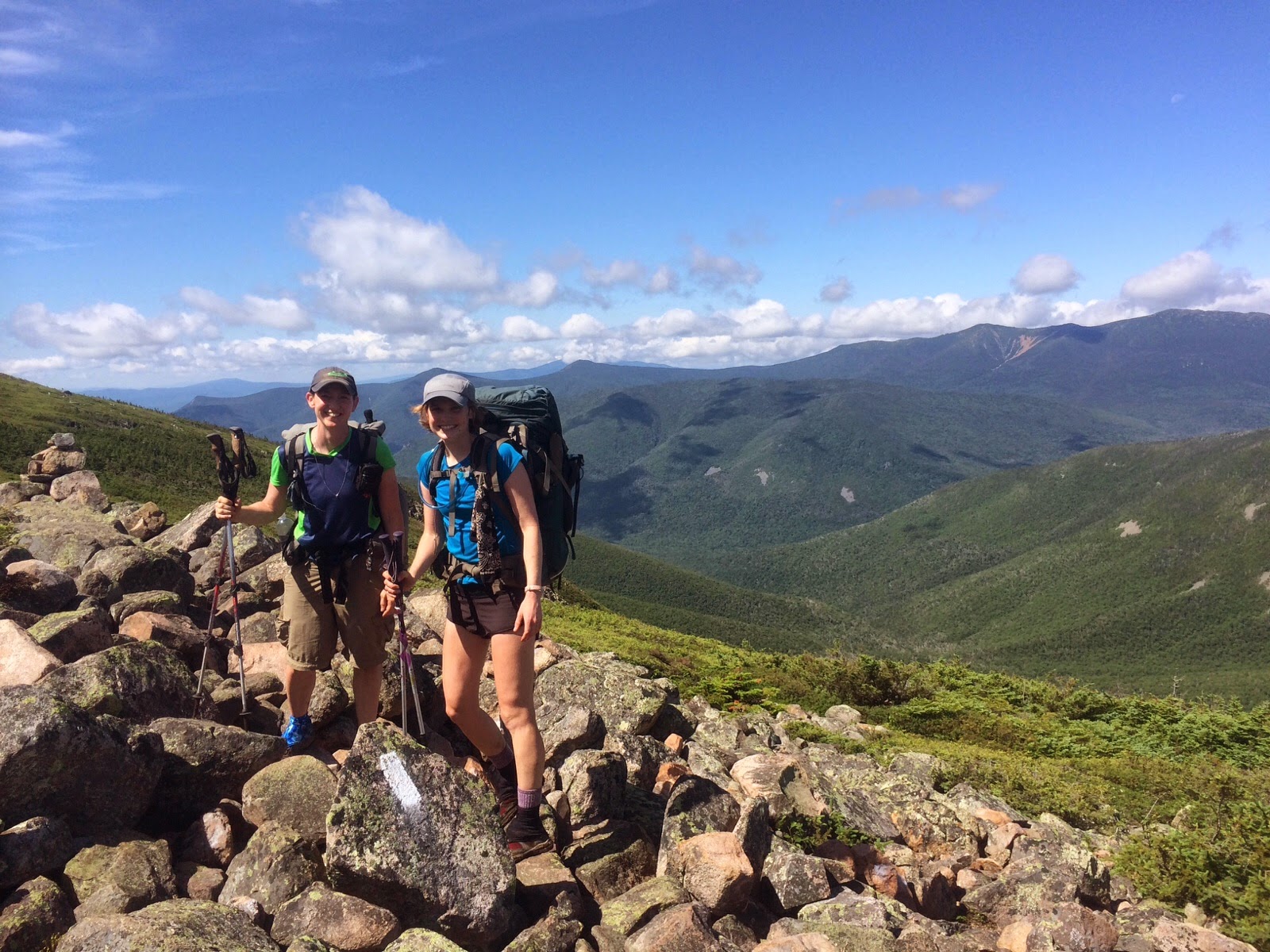 At lunch, we passed the Zealand Hut. The huts often have leftovers that they are willing to give to thru hikers and they sell some items for lunch, so we stopped to have a nice lunch break there. They were giving out rice porridge and we each got a bowl. While we were there, we saw five other NOBOs including Geared Up and The Machine. It was really nice to sit inside at a table for lunch and get a bowl of something other than our routine trial food. I also got pictures of the nice bunk area. It is much cleaner than I imagined, but there were rows of these near one another and it’s just too many people sleeping in the same space for me. 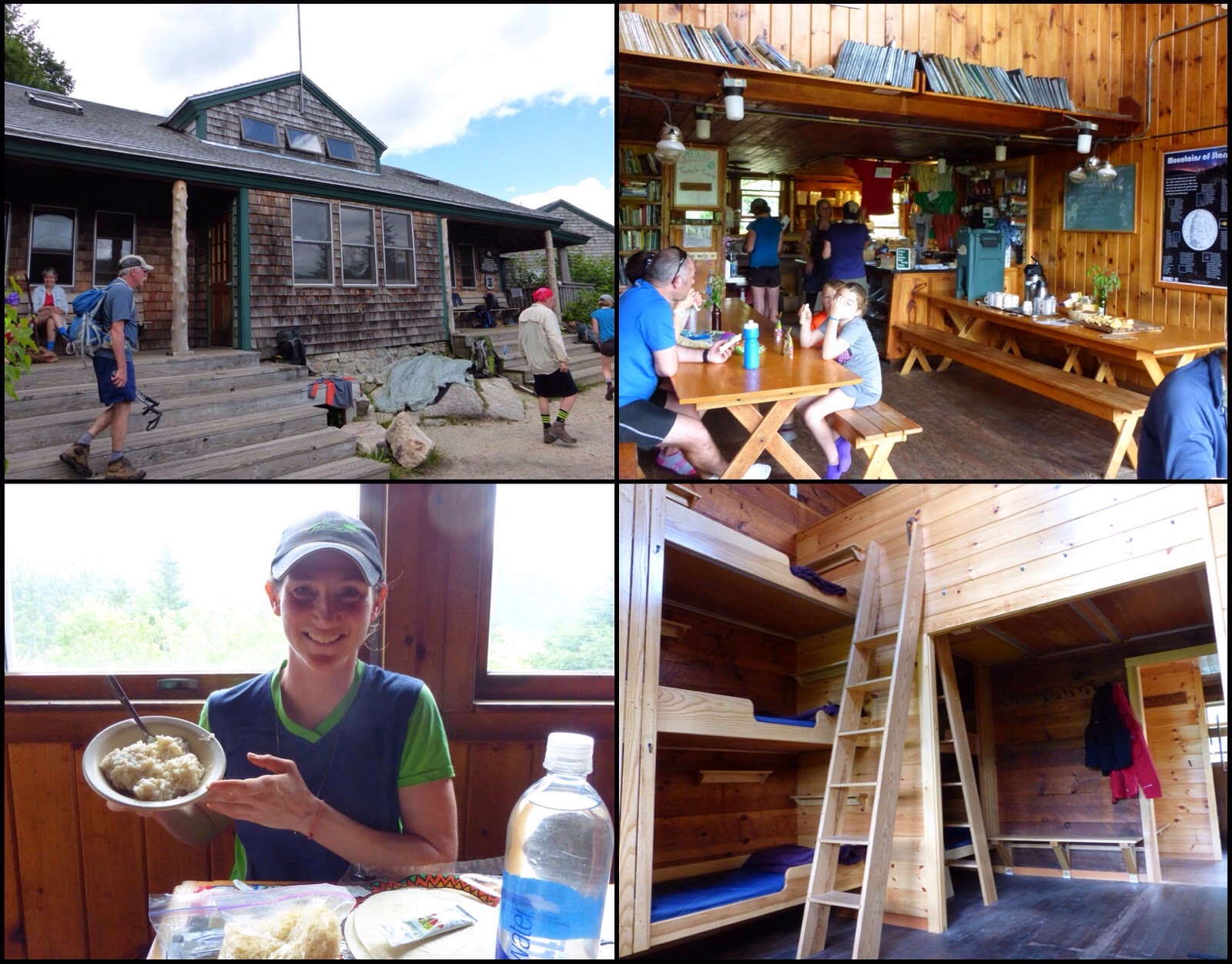 After lunch, it was pretty much a long level 5mi cruise and then a couple more miles of downhill before the final climb. We both enjoyed the relaxing stretch as it’s felt like ages since we’ve had level trail to cruise on. 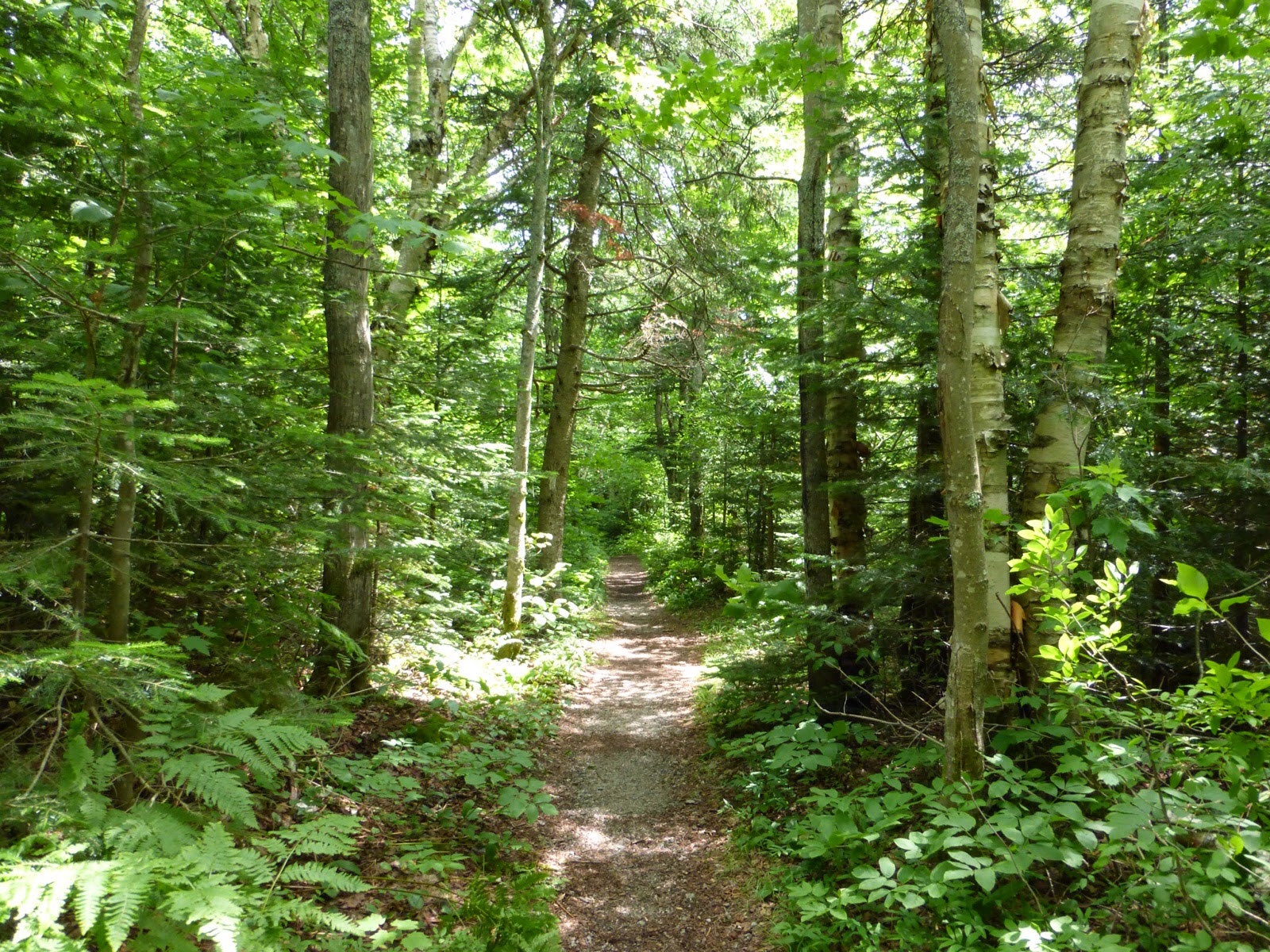 We also saw about 10 SOBOs today and that’s been fun. Here is a group of SOBOs we stopped and chatted with for a bit. 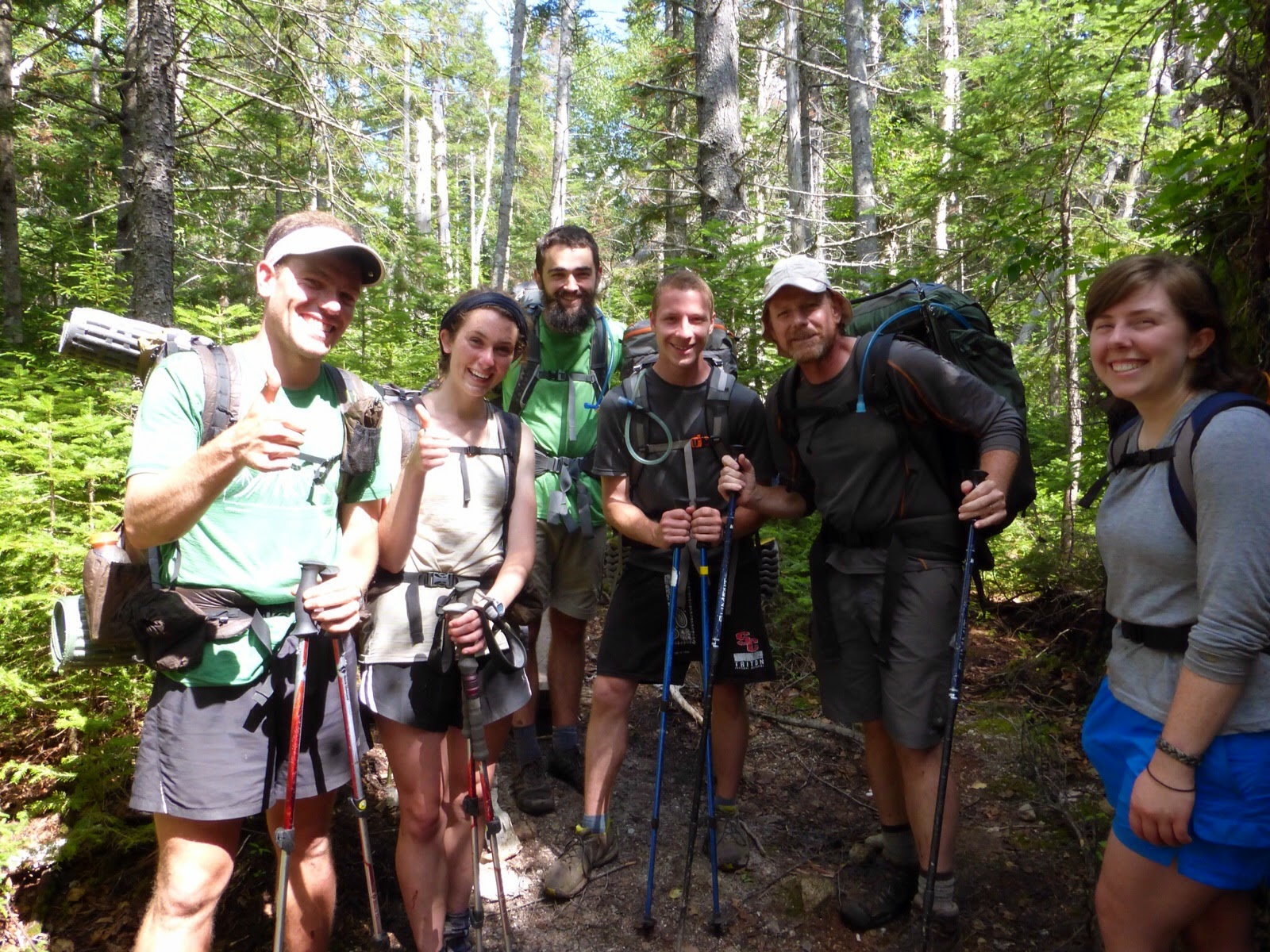 The day went by pretty fast as Jett Cat and I are still full of conversation with one another and giddy about having someone so compatible to hike with. I tend to lead the way and many times today I would hear a slight change in sound and look back to see this… 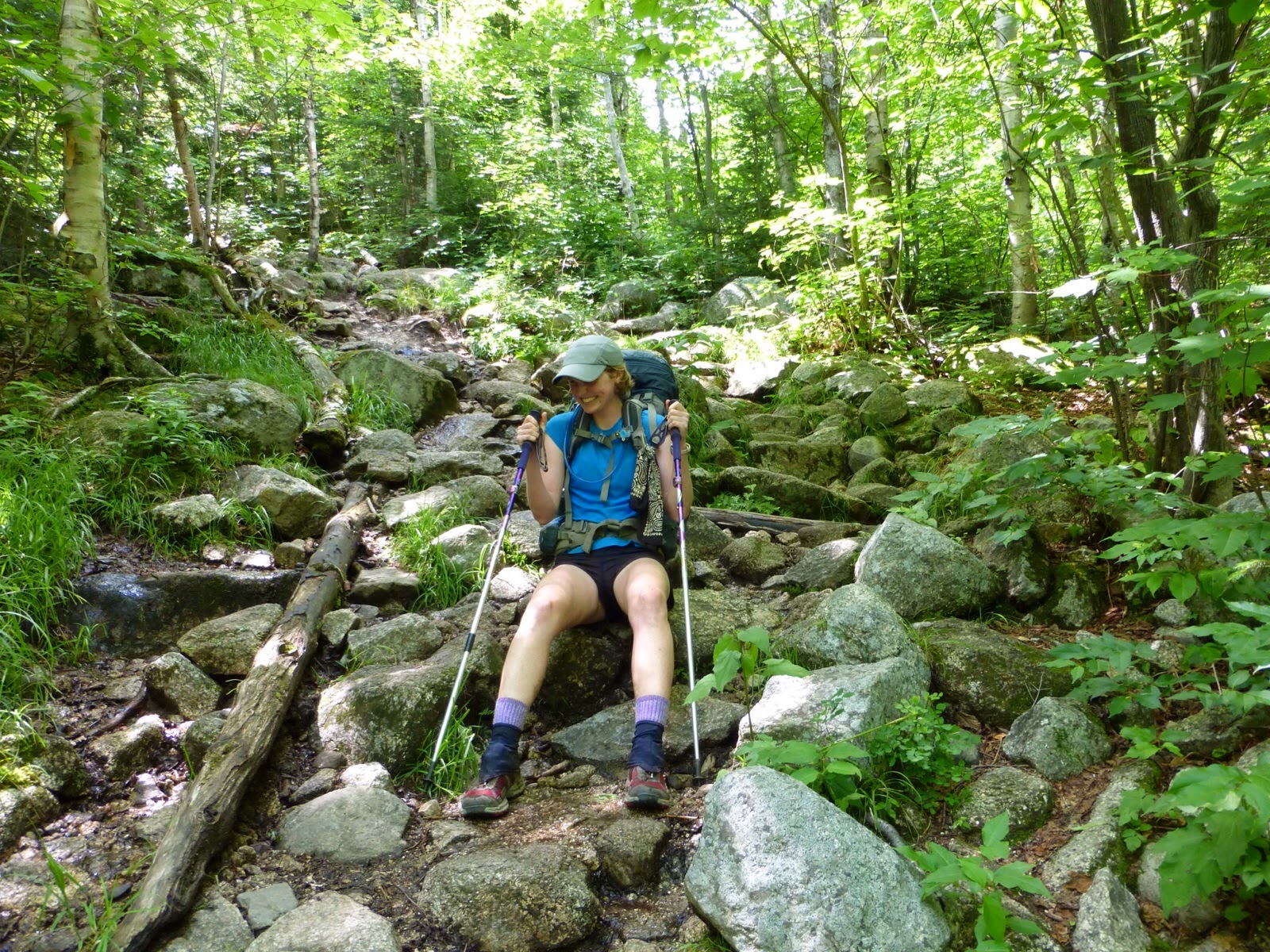 It was my entertainment for the day as Jett Cat had many close slips and little slides onto her “bum” as she would say. The pack just takes over sometimes and we both just had to laugh at the frequency of it. She’d catch the fall, but it would just be too much effort to keep herself from having a
seat, ha!It is just easy to have little slips in the Whites on these rocky downhills.

The day ended with a hike up to the south end of the Webster Cliffs and we will hike across the rest of the cliffs tomorrow morning. We were done by 6:30pm, and it was a perfect end to the day to walk over and watch the sunset from a viewpoint looking across Crawford Notch. 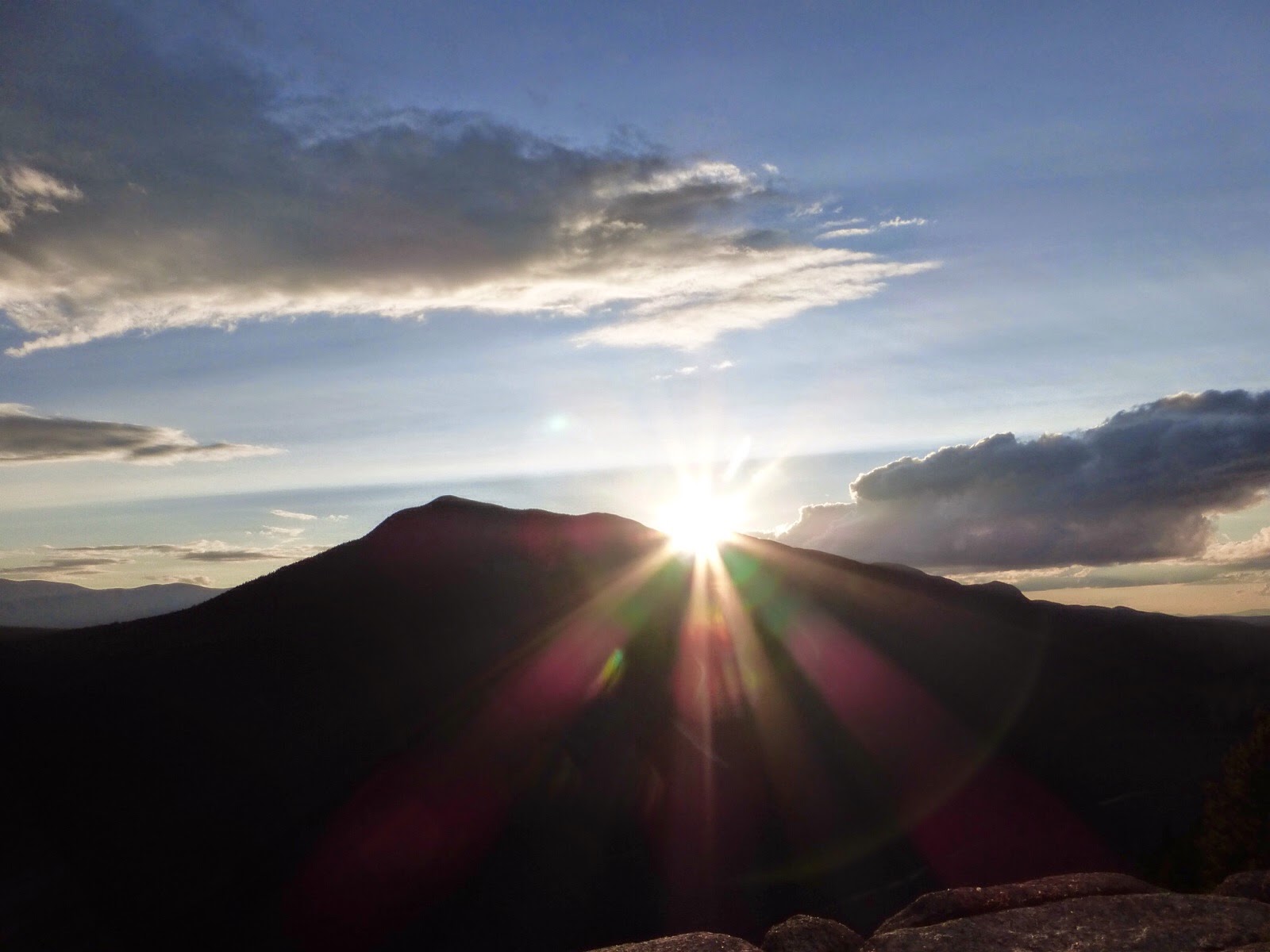 It is nice and cool again tonight as we can hear the winds gusting through the trees. It is dense enough that we are not affected by the winds, but the calming sound of it and the warmth of all my winter clothing has me dozing off as I type again tonight. 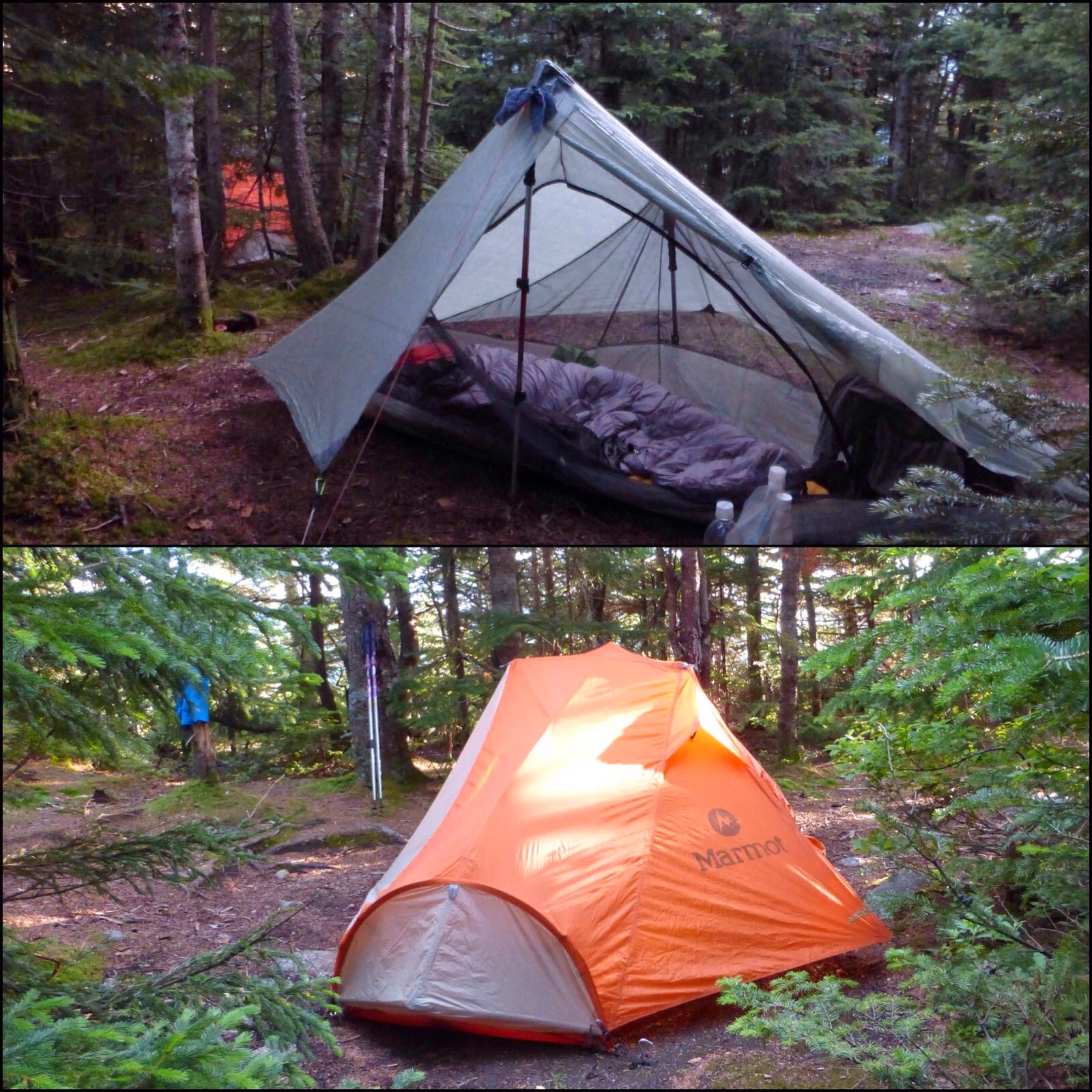 We just had a great day together and are looking forward to a big day tomorrow. We will be going over the Presidential Range which is another highlight of the hike. We are going to get an earlier start and hope to do almost 20mi again tomorrow which will put us back on Plan A since we did more miles than we anticipated. We are so glad it all worked out and that waiting the half day yesterday didn’t end up changing our most ideal plans for this leg. All is right in hiker world!