I was awake just before 5am this morning and I could sense that Jett Cat was awake too. She likes to start her day at 5am with a hot breakfast of oatmeal and coffee, but worries about waking me up, so I could tell she was waiting. I let her know I was up and she excitedly got her routine going while I lounged in and out of a bit more sleep. We started hiking at 6:30am and had two options for mileage today. About 18mi to a shelter that had tent pads for a small fee or about 20mi to a stealth site on top of a mountain. We hoped for the bigger day ending with a sunset and figured there was no way the miles would take as long as yesterday. Especially if we don’t make another wrong turn and waste time like we did yesterday.

The hiking started out very leisurely for the first 5mi of the day and we loved it! Level trail with few obstacles. We’ve heard the water crossings are going to increase into Maine so we got a picture of that too. 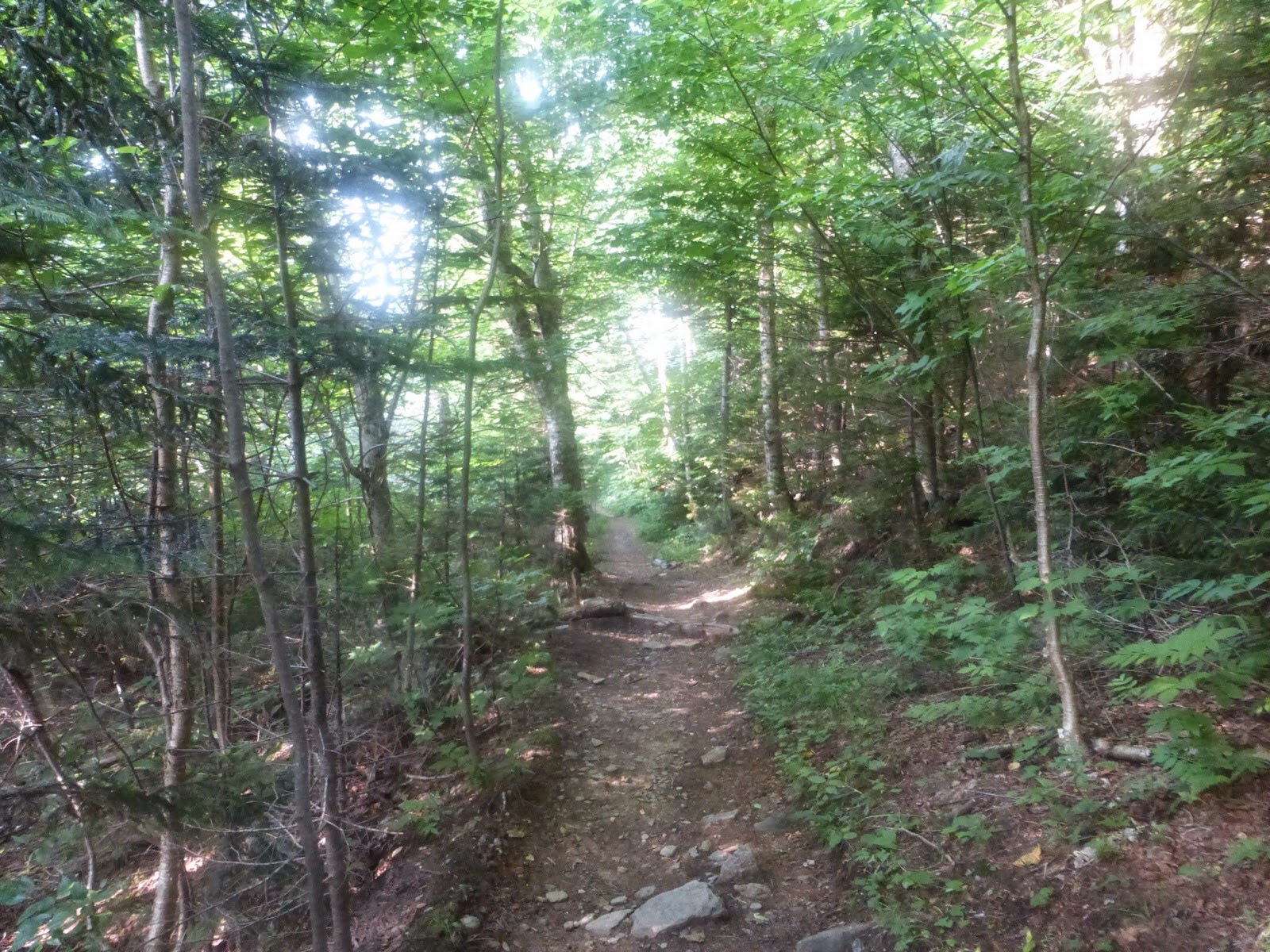 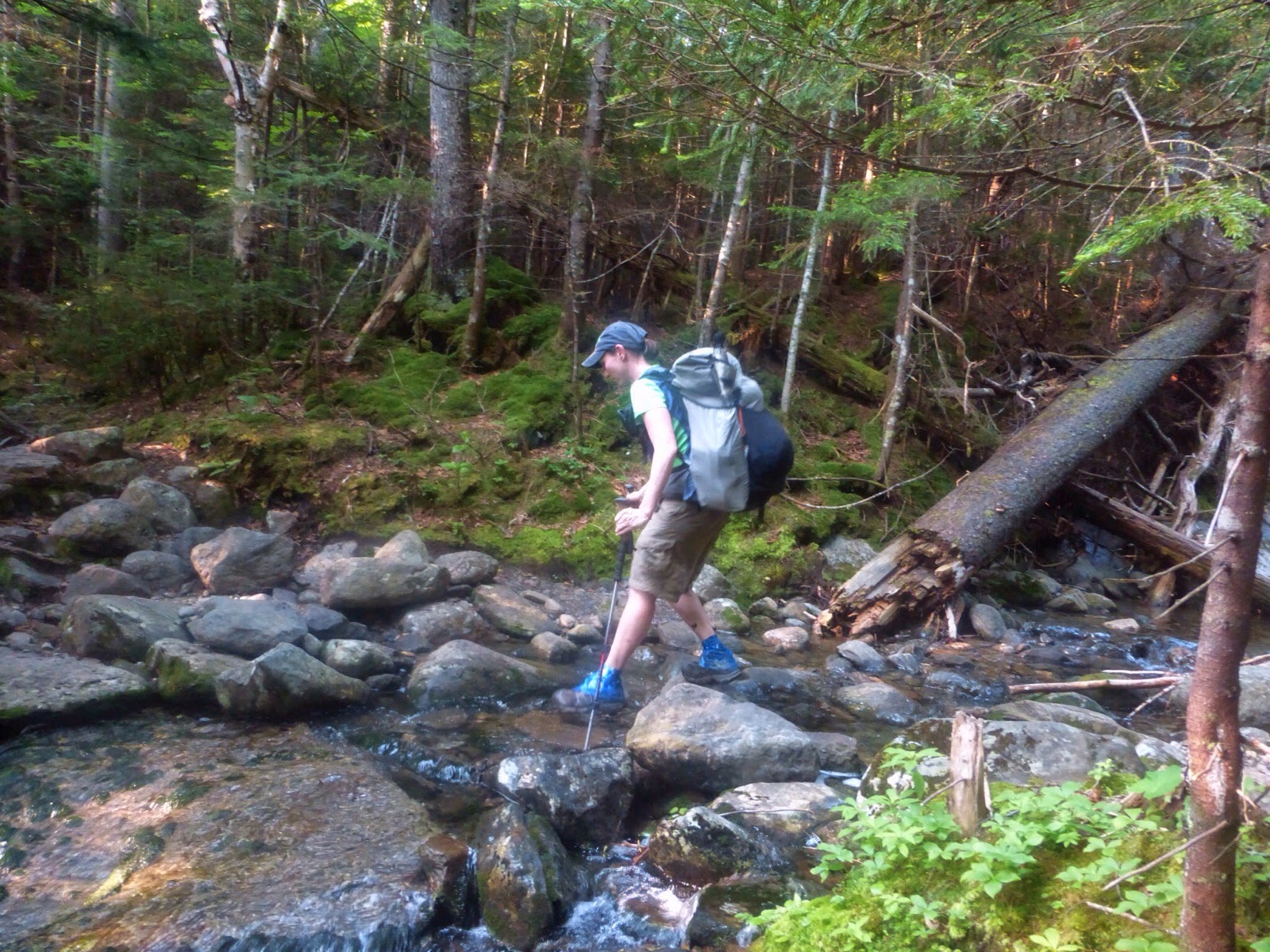 Another hiker leaving from the campsite this morning told us that there was breakfast at the Pinkham Notch Visitors Center. We realized we had eaten something at a hut or visitors center for all our meals yesterday, so we just had to keep the streak alive with some bagels and cream cheese at the Visitors Center. We got there at 8:30am and realized we had not hiked very fast this morning. We are still both so excited to have each other to hike with that we somehow have been talking most of the time we’ve been together. We were talking all morning and must have fallen into a slower pace by accident. We figured with just 19mi to do, that was ok and agreed to pay better attention to timing after breakfast. Good thing we said AFTER breakfast because we ended up hanging out at the Visitors Center for an hour as they had wifi and we were just distracting each other. I found their directions sign amusing. 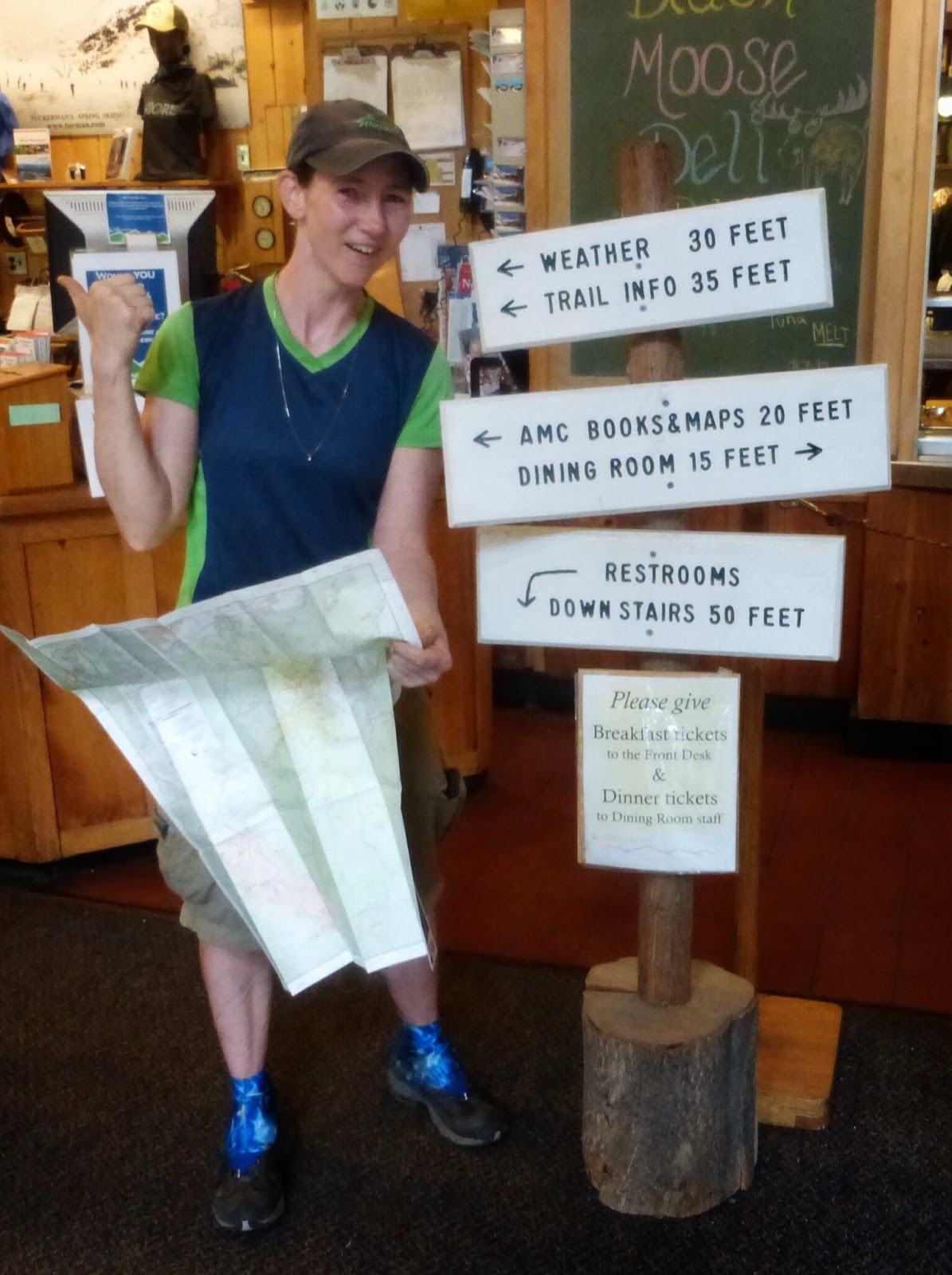 An AT hiker from 2003 said hi to us and told us to do the side trip up to Mt Hight if we had time. We stowed that tidbit away for later and started hiking up, up, up to Wildcat Ridge. It was very slow going with more of the straight up scrambling and hiking a lot of the day. We still enjoyed the exercise of the climb and have found that we somehow crack each other up all day, so we have completely lost focus on pacing while talking and laughing most of the day and swear we’ll do better next leg as this is our reward leg. We seriously both feel sore in our stomachs from laughing so much and joke that the trail has finally broken us as we just can’t stop laughing at each other. It is the best time by far for both of us these past three months. Here is the ridiculous scramble for the second half of the morning today. 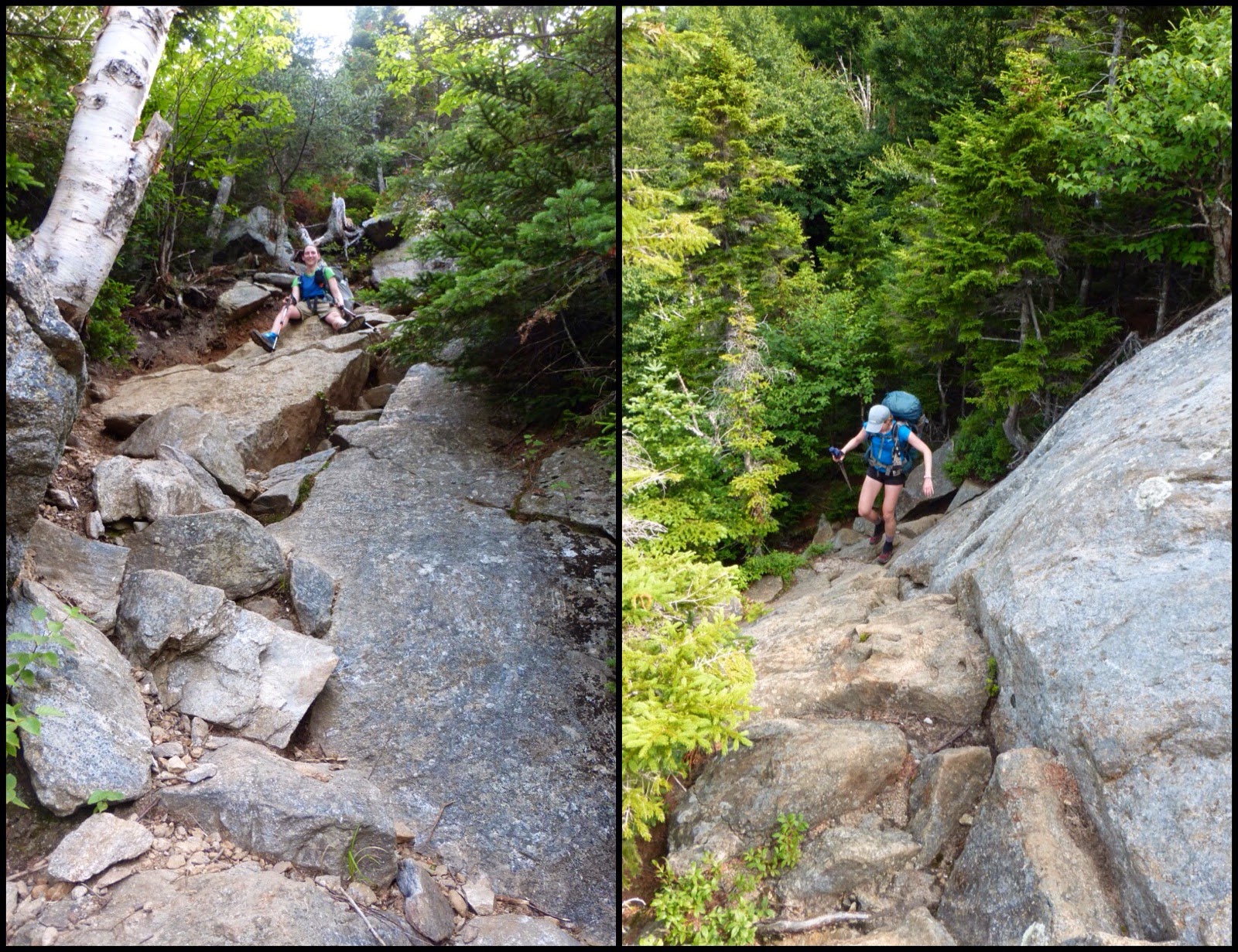 There were nice views up top of the Presidential Range that we went over yesterday and that was fun to see. 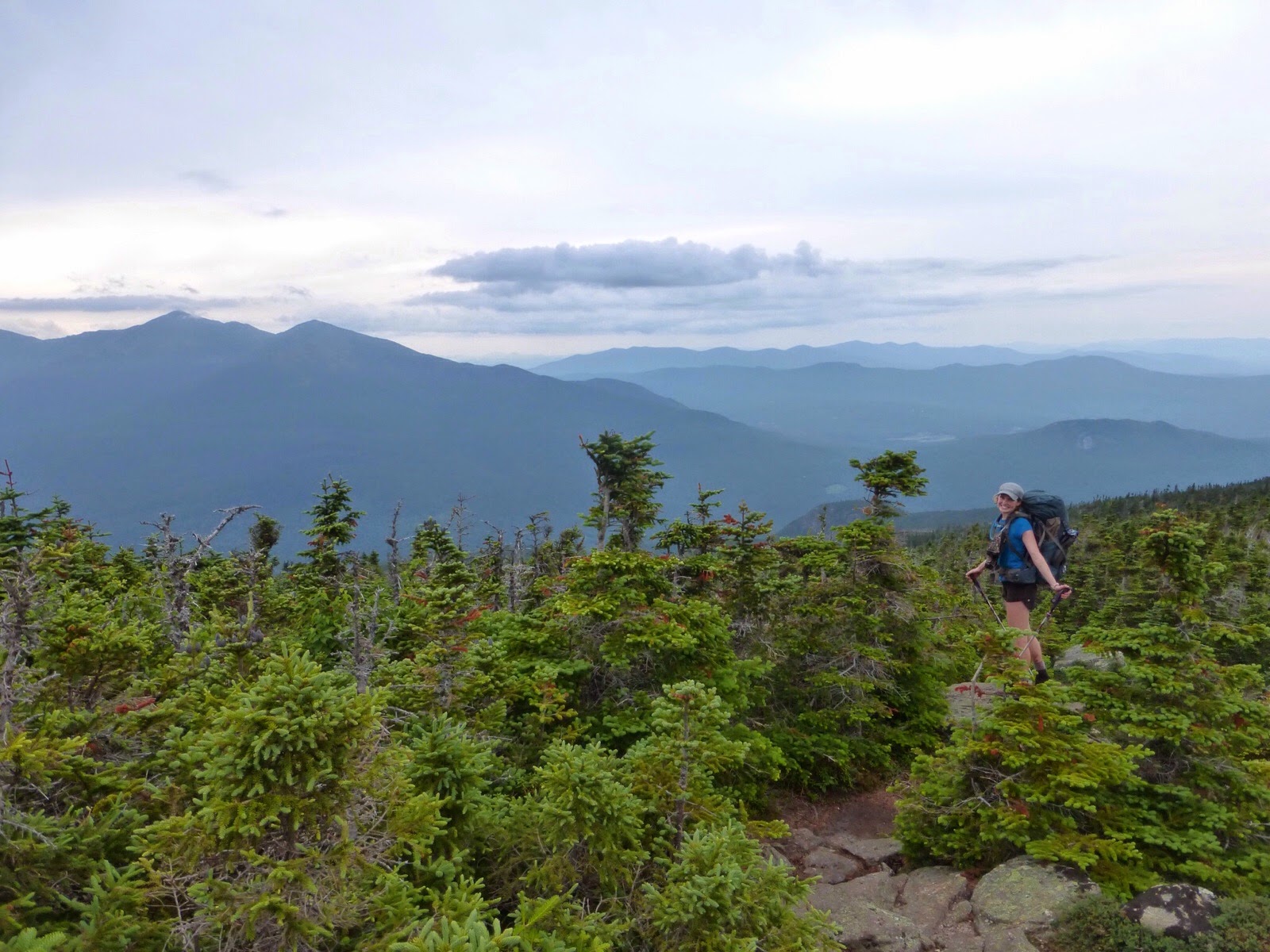 We hit Carter Hut, the final hut in the Whites, for lunch. It had two nice ponds next to it. We had to keep the streak alive to make it our 5th meal in a row that wasn’t from our food bags. Once we told them we were thrus they offered us leftovers of beef stew, cornbread, and rosemary chicken. We were stuffed by the time we left! So great! 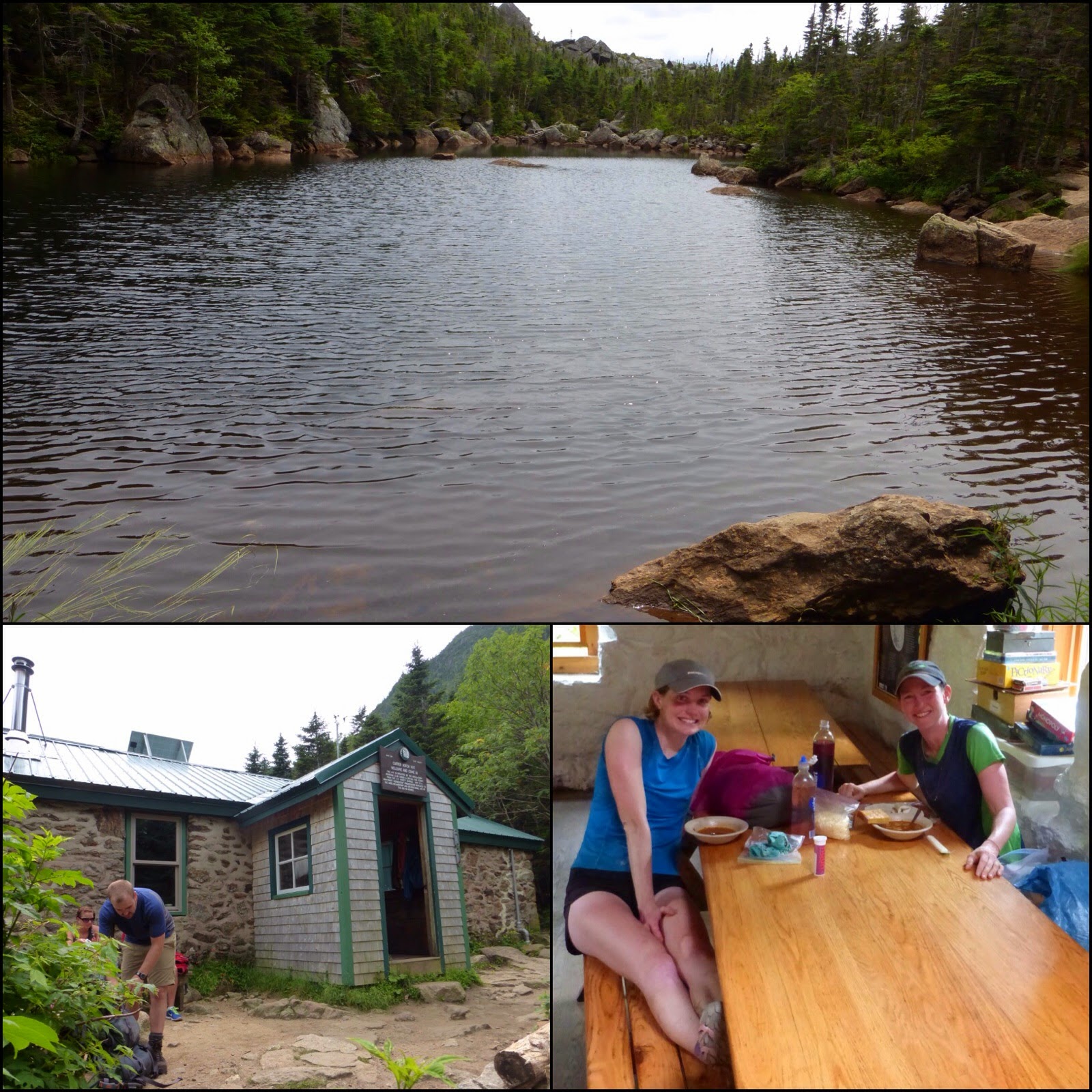 The rest of the day was on the Wildcat Ridge which went over many summits including South, Middle, and North Carter. Much of the ups and downs ended up being very rocky with more slow steep scrambling required. 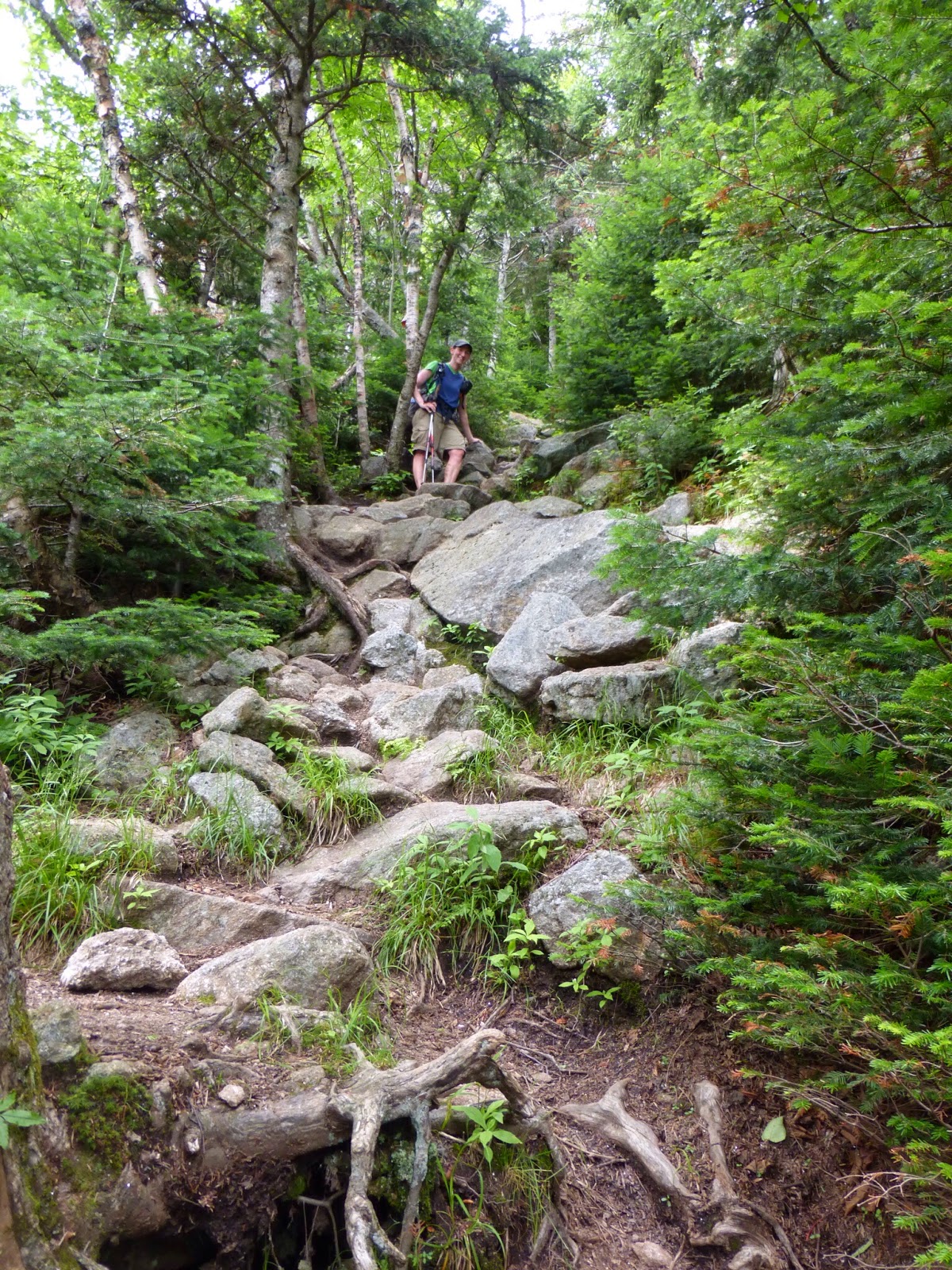 We reached the junction that went to the recommended Mt Hight and a couple was in front of the sign deciding if they should do it. We relayed the advice from the guy earlier that it was a recommended side trip and continued on the gradual downhill. We were talking about who we’ve overlapped with on trial and I was specifically talking about Sparky (hi Sparky!) when we hit another junction. We looked and were confused as something didn’t make sense. Then we realized that Mt Hight was the AT and we had just cruised for 1.5mi on a downhill shortcut! Immediately Jett Cat said, “We have to go back!” and I suppressed the urge to make a LOST joke in that serious moment and agreed and we trudged back up the hill. That lost us 30mins and made it two days in a row of missing a turn on the trail. It also pretty much sealed the deal that we weren’t going to make it to our further destination with all our shenanigans. The best part was that neither one of us minded because this was the most fun we’ve had all trail no matter what the mileage was, which is big for both of us. The view from the top of Mt Hight was great too. 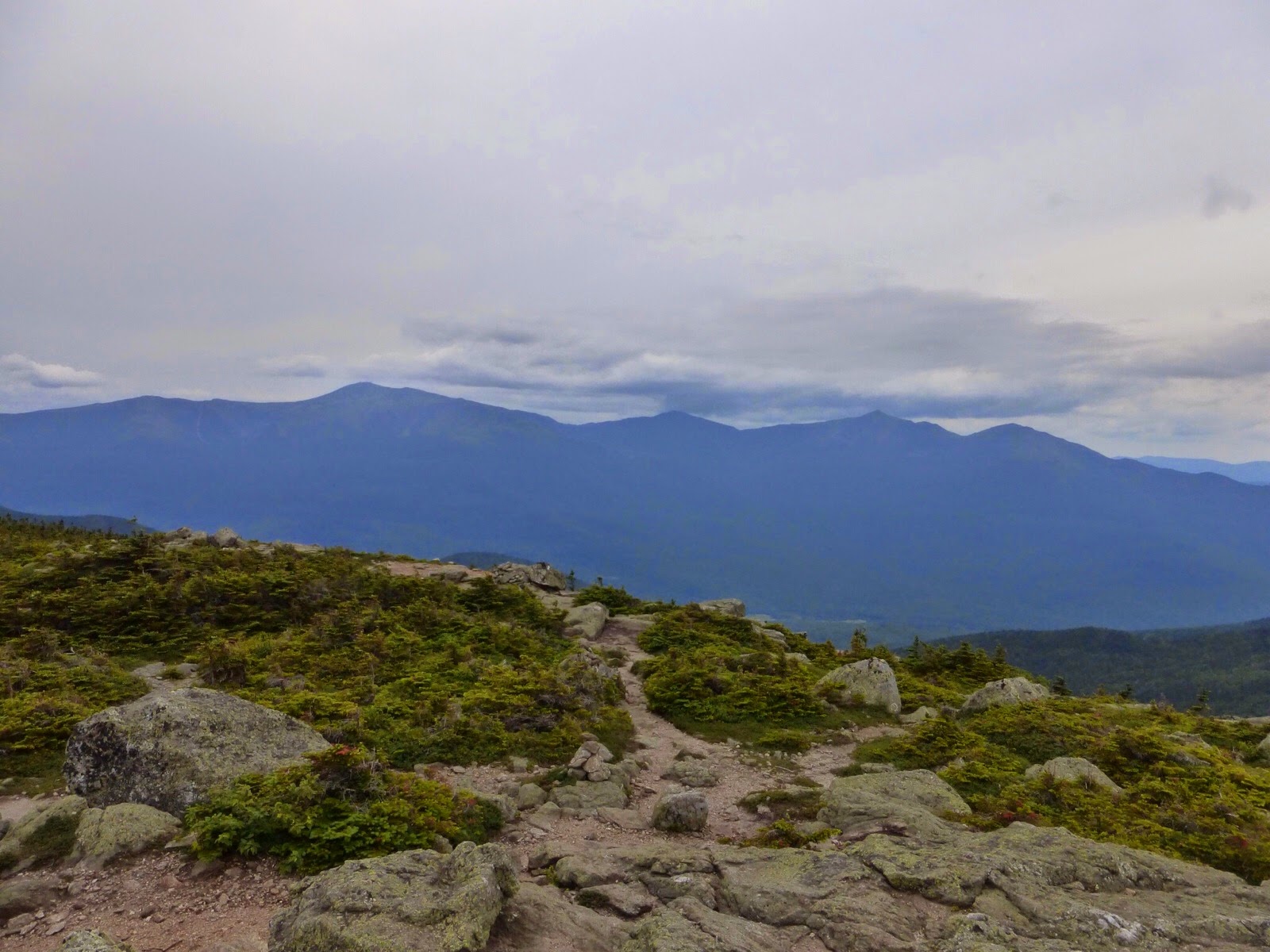 The rest of the afternoon was slow going on steep and slick downhill rock. Some of it had water running over it with slick spots. Both of us had our slips and each time there was too much laughing to get up very quickly. Jett Cat was a good enough sport to let me photograph two of her “bum” slips and I had a great one in which my bottom foot slipped causing quite the odd positioning coming down some rocks. It wasn’t until afterward that we regretted not photographing it for a falling montage so I did a dramatic reenactment once we got to camp to add to the Jett Cat bum slips. 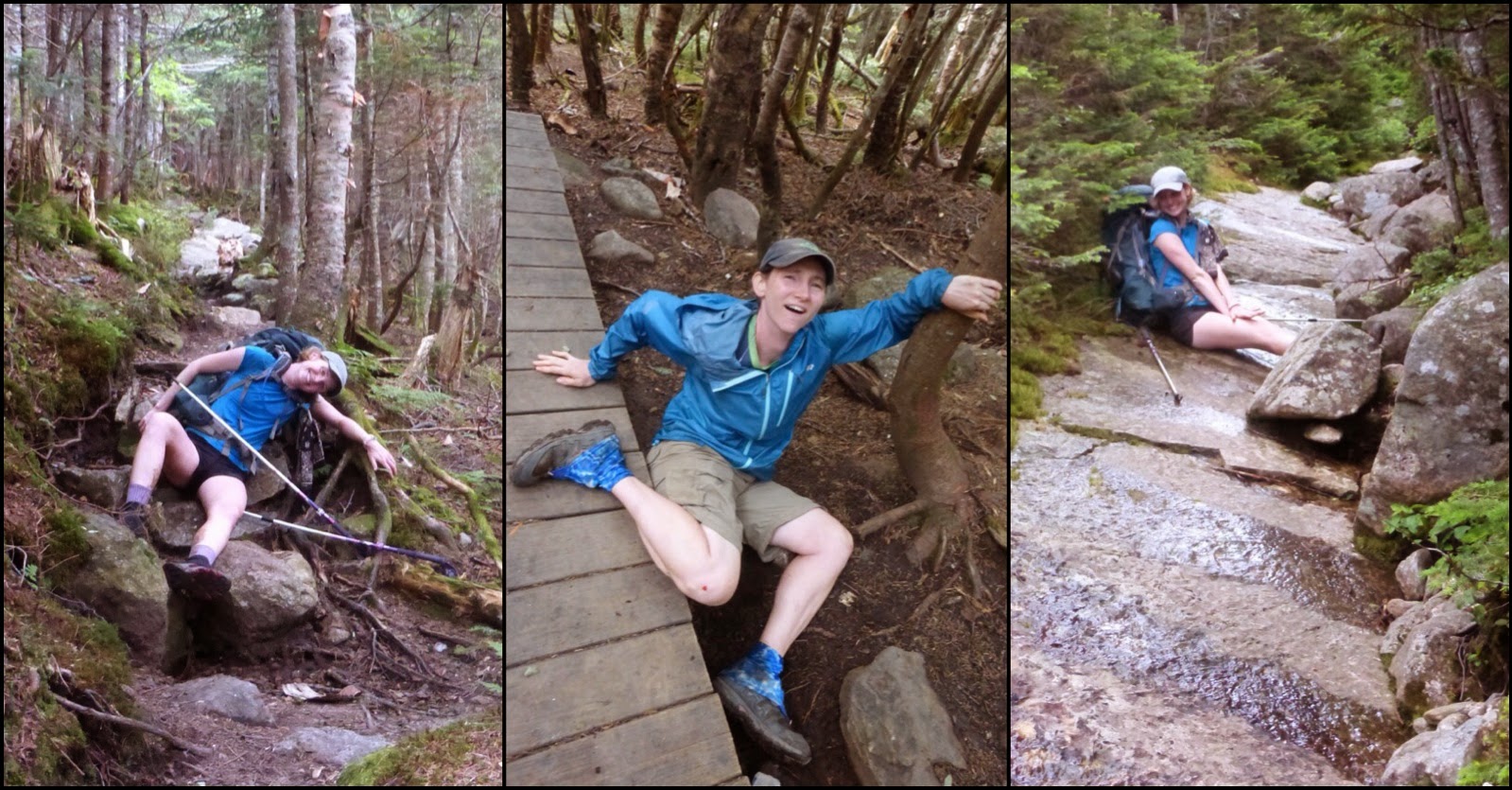 I just have to add a quote of the day from Jett Cat. At the end of the day today, we were assessing our mileage and how we felt like we hadn’t reached out goal today. Then Jett Catt pointed out that ending at the shorter distance tonight was the scheduled Plan A site for tonight and that we had made up miles as we had started this leg delayed by rain on Plan B. She said, “So we are just adequate” which was intended to be positive, but totally captures our gut that adequate isn’t enough. We got to camp at 6:45pm and both agreed that it may have been a low mileage day, but we had a blast. We have 8mi to the road where we will go back to Swinja’s to shower, laundry, and resupply. 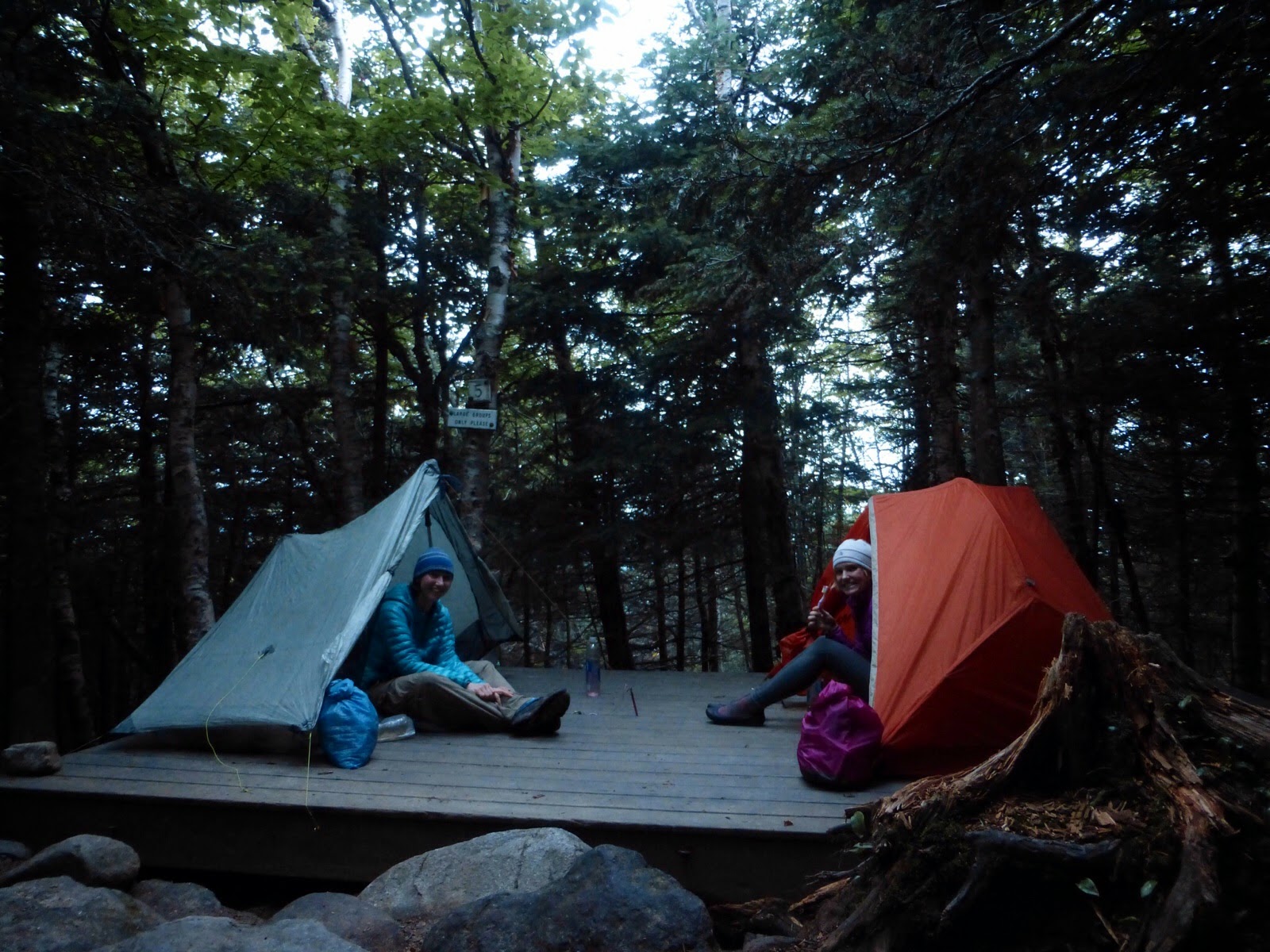 Since I’ll be hiking so much with Jett Cat, I wanted to give a proper, yet delayed bio/introduction. Jett Cat is 28yrs old and the AT is her first long hike. Her trail name came from the size of her pack and was originally Jett Pack. Her middle name in real life is Jett, so she is known as Rita Jett. It evolved to Jett Cat due to some nimble footwork and landing on her feet which we laugh has not been evident lately. Before the AT, the most days she had backpacked as an adult was about three nights. Her main passion is biking. Before the hike, she worked as a product manager for the bike company Specialized Bikes in California. Her life was pretty much bikes and she especially liked riding in these crazy mountain bike races that were 12 and 24hrs long. Yes, 24hrs of riding a mountain bike on a course to see how many laps you can do in 24hrs. I’ve never heard of these kinds of races, but just type insane masochist into Google and it should come up. She was raised in Florida and got the idea in her head of doing the AT when she was younger and her brother did a 50mi backpacking trip on the AT. The timing of now works out as she quit her job and has decided to transition into another profession (TBD) and go back to school. Jett Cat also requires little sleep and has more difficulty sitting still than I do. It’s been great to be around another person who enjoys physical challenges and endurance activities so much. She said the intention in doing the AT was to get the adventure out of her system before going back to school…but it may have just stoked the fire even more…