We had a great time at the Lakeshore House in Monson and were in no hurry to leave this morning. It’s the perfect little place for a final trail town. We ate breakfast next door with some of the other hikers and then relaxingly got our resupply and chores done before leaving. We have already planned out the campsites and daily mileage for this last leg, which will be 114mi in 6 days. We only needed to do 14-15mi today to set us up for 20-25mi days before the final Katahdin summit day. We are feeling good about our plan and it should be a relaxing end to the hike. We are entering the 100 Mile Wilderness which has been hyped up all trail as the most remote stretch of trail on the AT. It is also very flat, has many ponds, and is said to be a really nice wilderness area. Here is the sign all thurs have to smirk at as they enter the 100 Mile Wilderness… 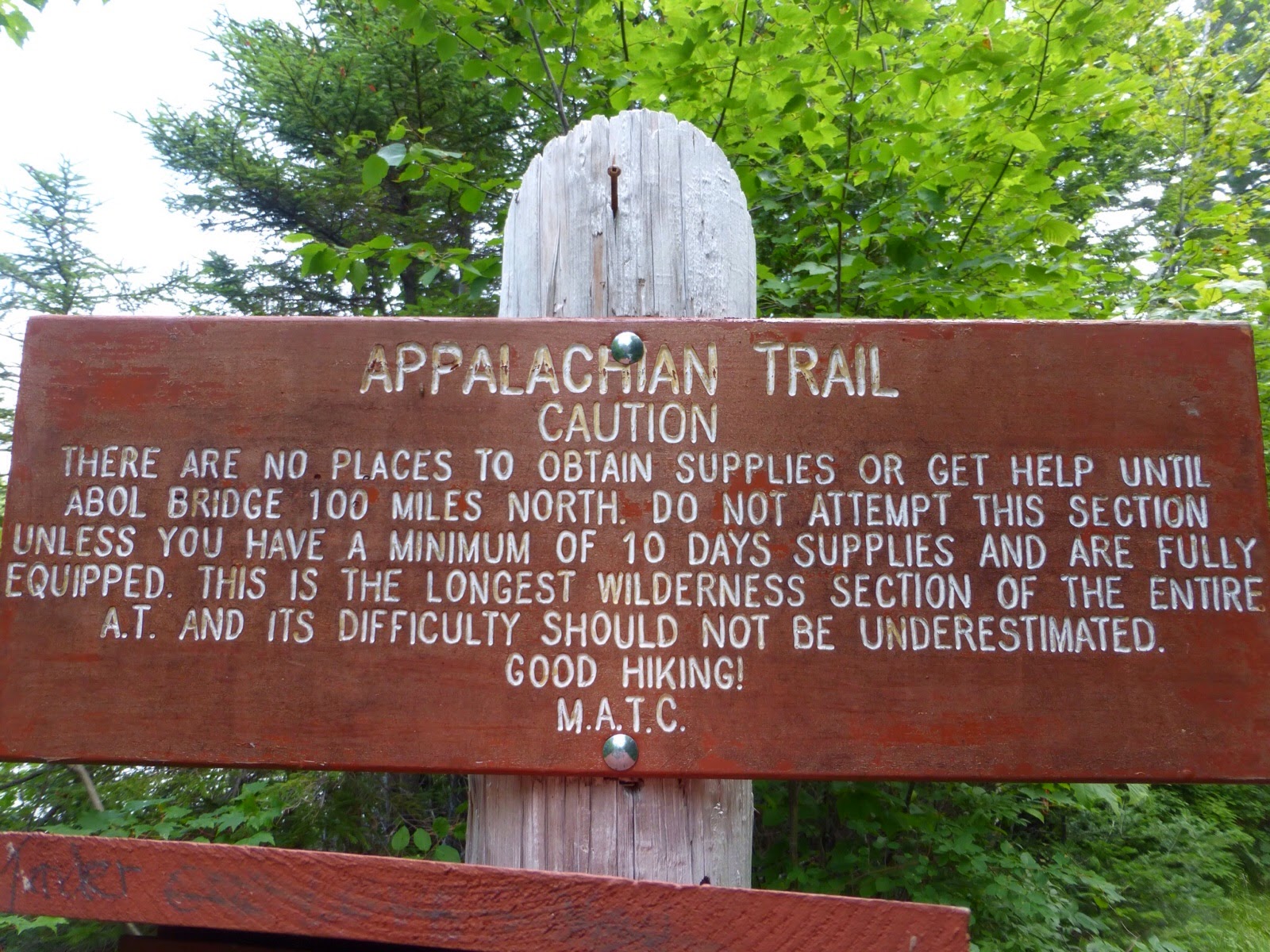 Despite what the sign says, we heard traffic and boats much of the day so we weren’t too far out. We started hiking at 10:45am which was a good 30mins later than planned, but there was a delay in the shuttle. Neither one of us minded as we still had plenty of time. With this being a 6 day leg and the fact that it is the end of the thru hike when we eat a lot, this can be one of the heaviest carries out of town for many hikers. We were definitely feeling the weight and just moseyed along today. We just leisurely strolled along and realized out pace was really slow. It wasn’t because we were tired or the terrain was difficult (rolling with roots made for some slow going). 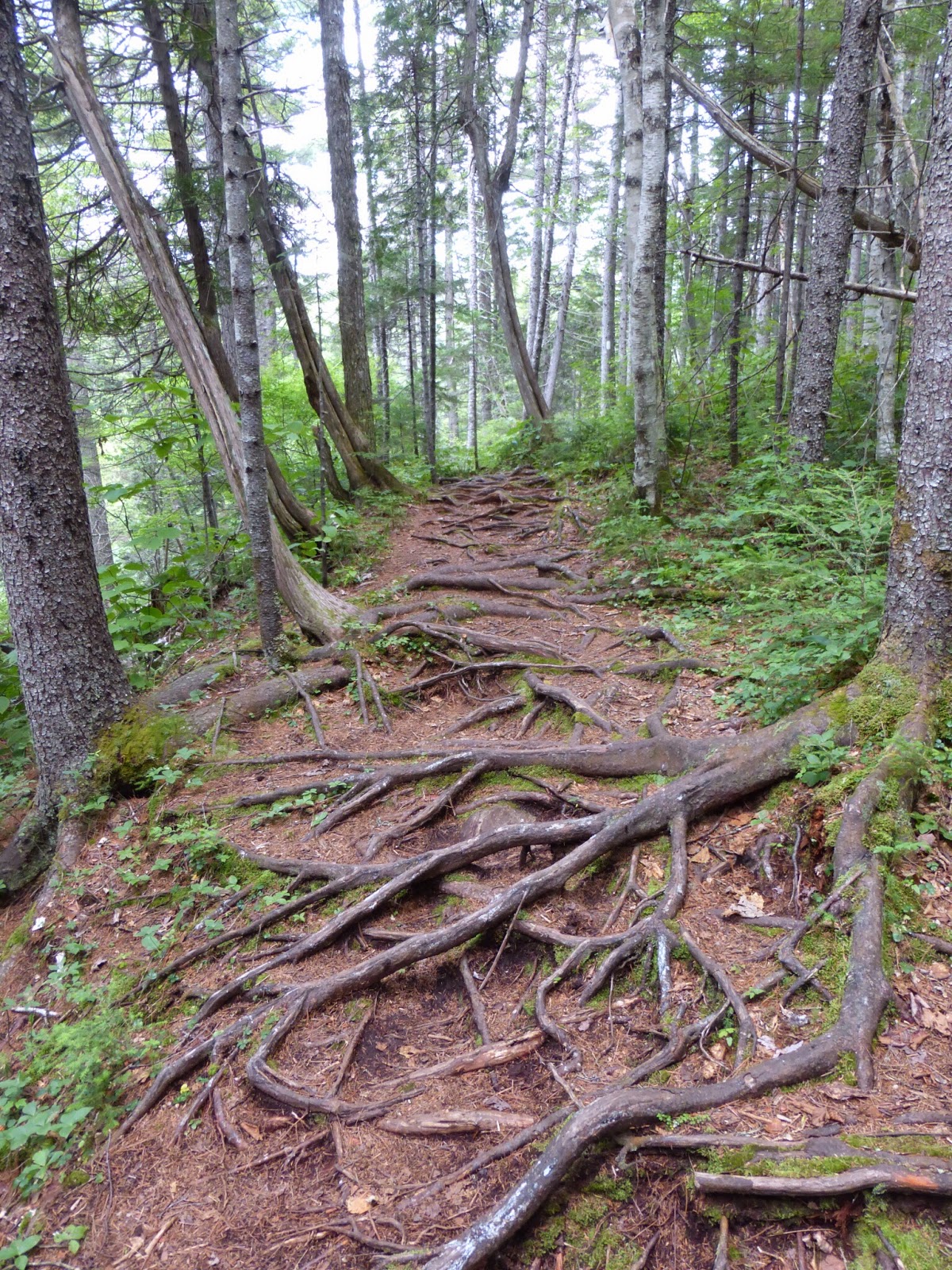 It was more that we just felt like walking slow and taking it in. We knew we were doing it and talked about how different it is that we both just felt like moseying. Each step forward is getting us closer to the end and it’s like we want to stretch it out and savor it. I’ve seriously never walked so slow on purpose! It was great as temps were in the 70s with a slight breeze and we walked through some really nice forest. There was a stretch that was super silent and peaceful. It was impossible to capture with words or photos, but worth mentioning as it was one of my favorite parts of the day. For lunch, we ate some town food we packed in at Little Wilson Falls. A family of day hikers were there and said it was a 30min walk up to the falls, so again, not a remote as we thought we were. It was a perfect spot for lunch. 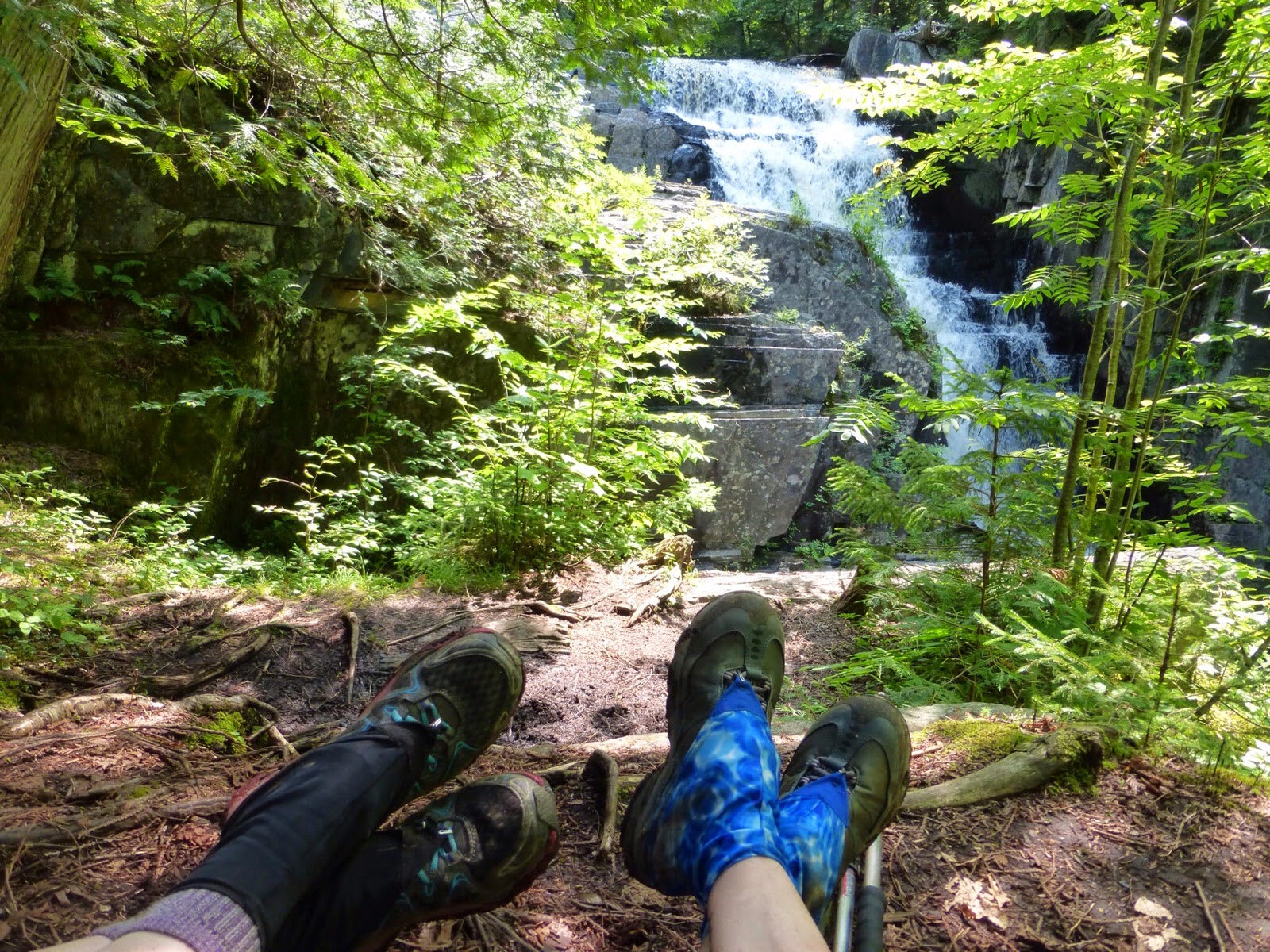 I got my fifth and final pair of shoes for the summer in the mail yesterday and was determined to keep them somewhat dry today. After having wet feet most of last leg, we really want to postpone the discomfort if we can. Rain is expected much of this week at some point each day and with the long leg, we wanted to keep our feet as dry as we could. Hopefully, it won’t be raining all day everyday. Somehow, the rain isn’t even bothering us and we’ve somehow accepted rain as part of the day like clouds or sun. We’d prefer to not have any rain, but at least it isn’t bothering our enjoyment too much so far. Today it was afternoon thundershowers. At least the rain came after we went over our one section with views which was the Wilson Cliffs. 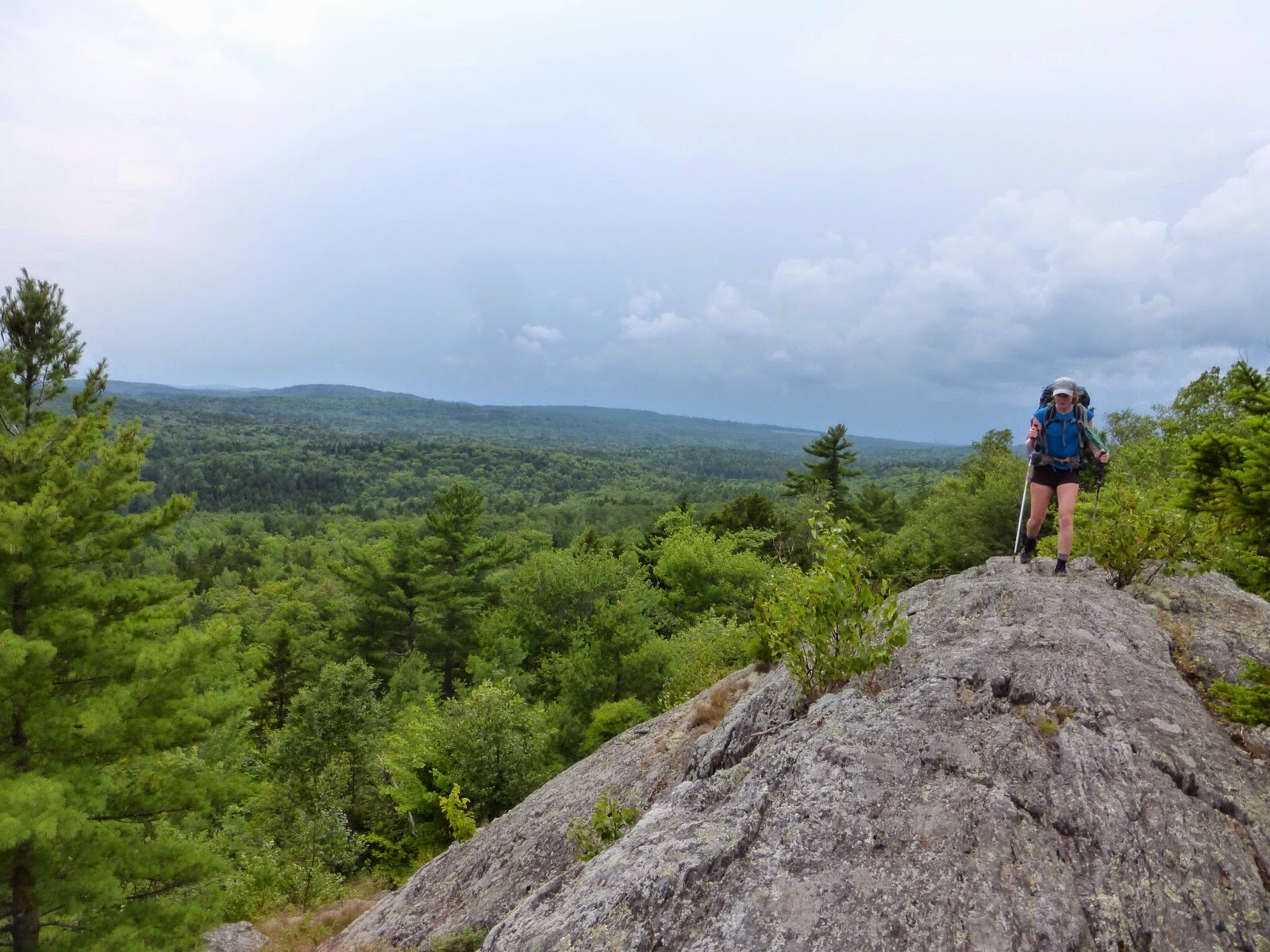 Along with the rain, we had three fords and we decided to cross in our camp shoes as they were all shallow. With the rain, I just took photos and Jett Cat’s camera was away and dry so no photos of me today. 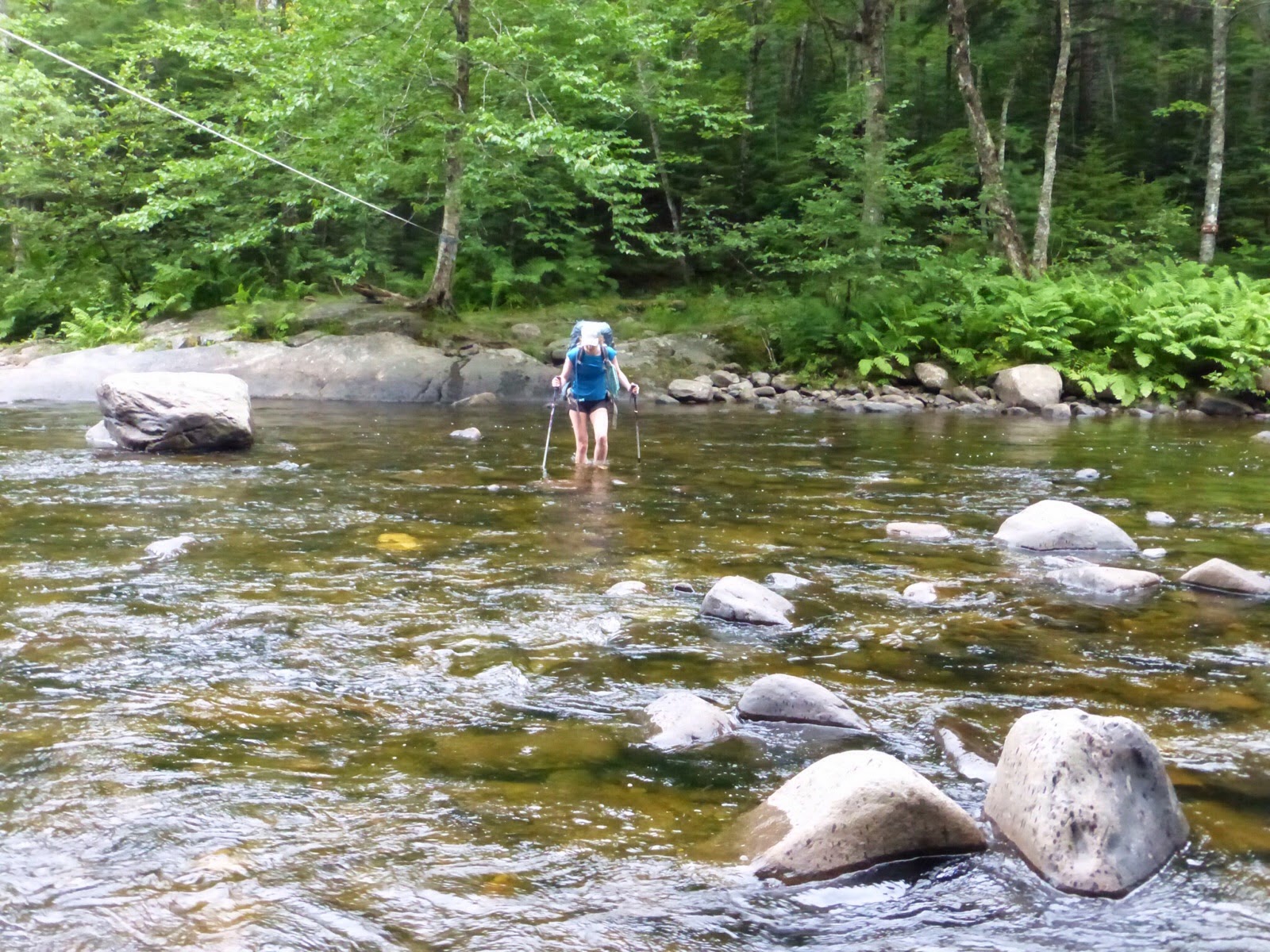 The rain came down lightly at first and was caught by the leaves, but it continued for a couple hours it seemed and had periods of a total downpour on and off. I was somehow staying dry under the umbrella and the shoes thankfully stayed pretty dry too. Like many hikers, Jett Cat has the strategy of just walking in the rain with no rain jacket. She handled it very positively and I felt horrible standing dry under the umbrella while she was getting poured on. I just can’t get that wet without shivering. She was her hilariously positive self who somehow genuinely thinks of the pros and said, “at least it isn’t acid rain.” As the rain came to an end, she also proudly proclaimed victory as she had two dry spots on her shirt on her stomach, ha! It wasn’t long after that, that she slipped into the mud on one of the thin elevated logs that are everywhere. It was quite humorous to help lift her out of the turtle position as her pack is extremely heavy! We were laughing so hard that we had to count down multiple times before getting her fully on her feet. Ah, good times… 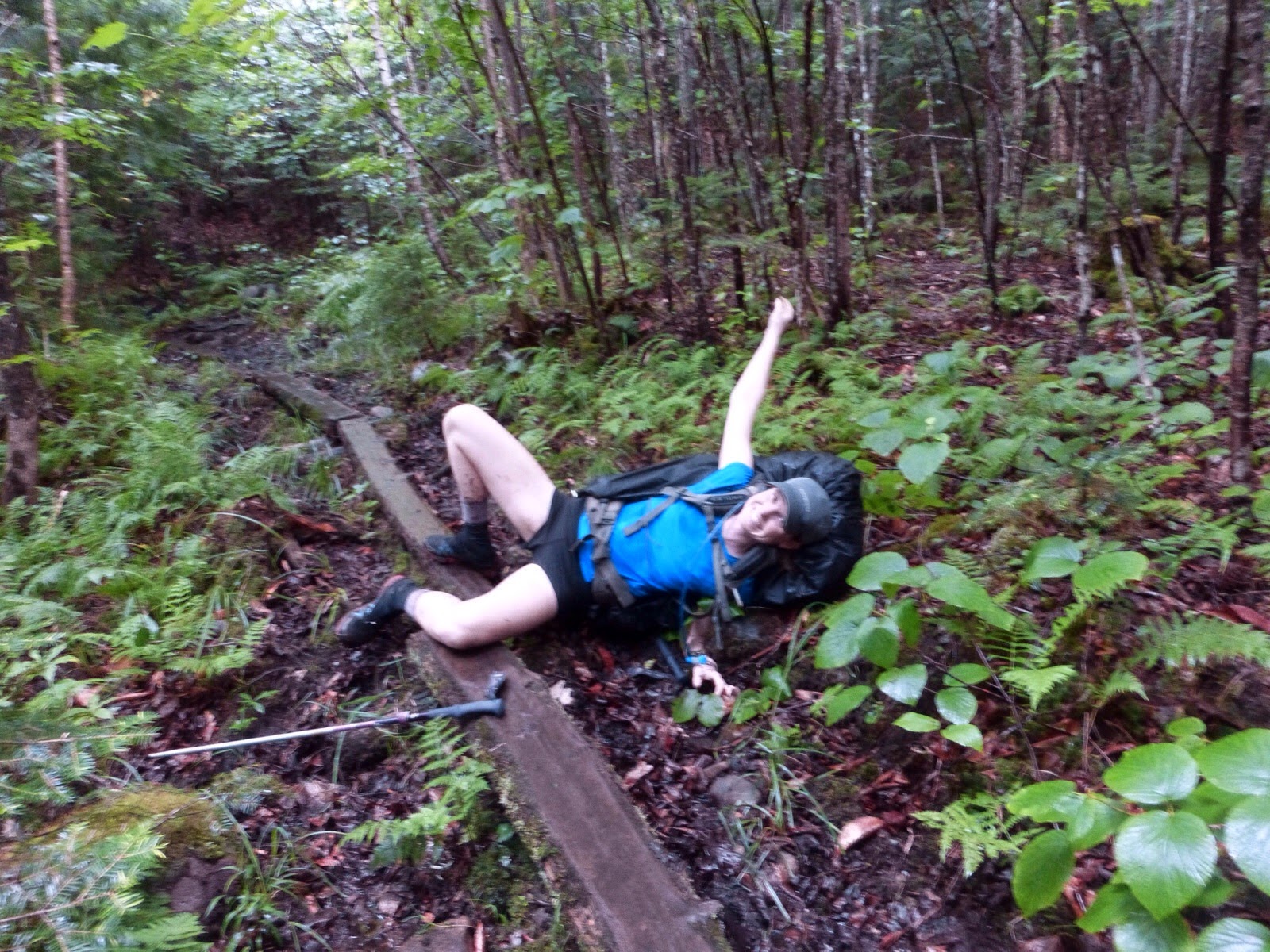 At the end of the day, we hiked up on a large group of a boys camp headed to the same lean-to as us. We already knew there was limited camping there and this group would guarantee a tight squeeze or no camping at all. We chose to stop after the last ford along Long Pond Stream. It is .7mi from the lean-to and it was 6:30pm, so we were good with the timing. It is a great site right by the water! 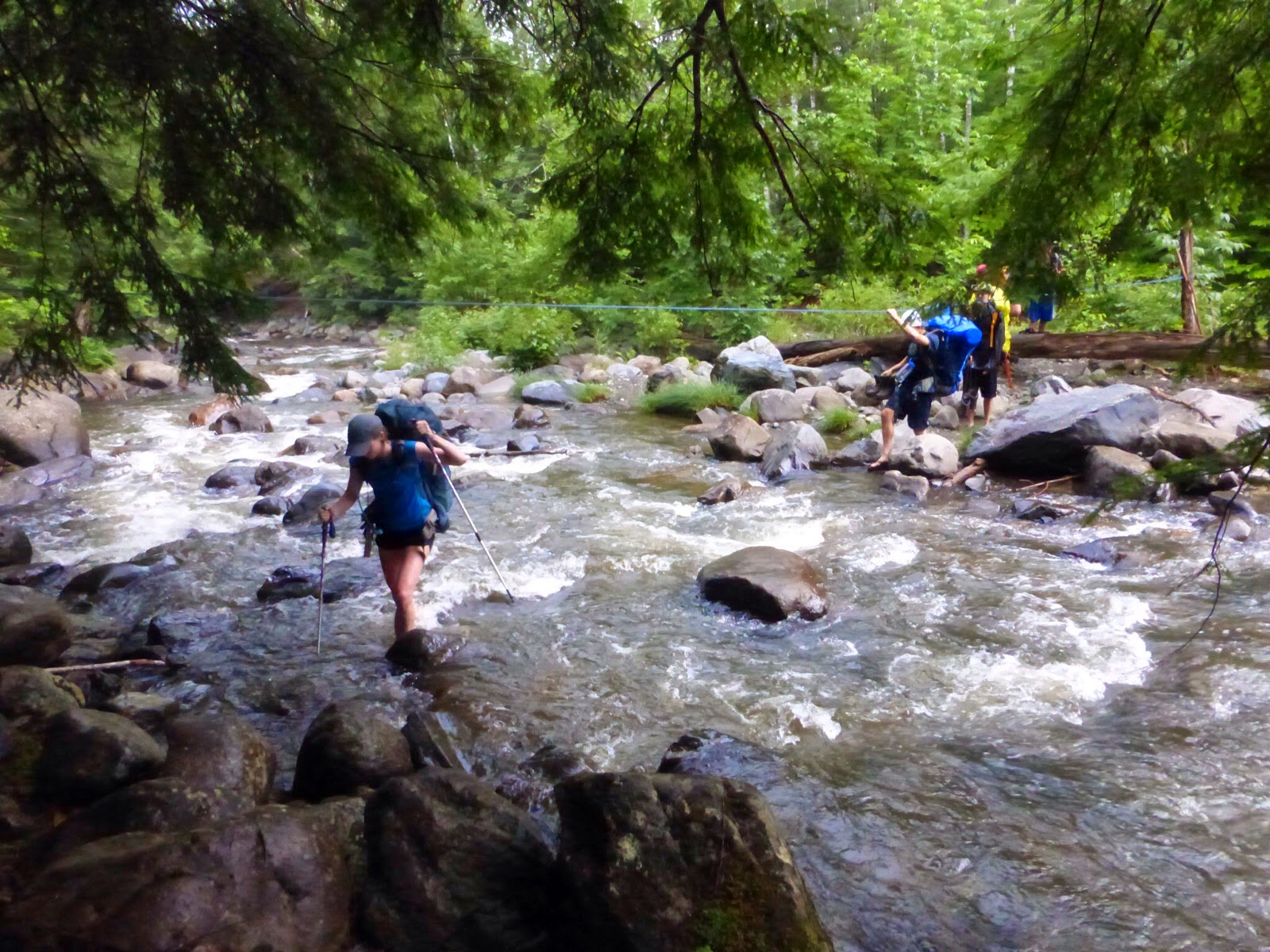 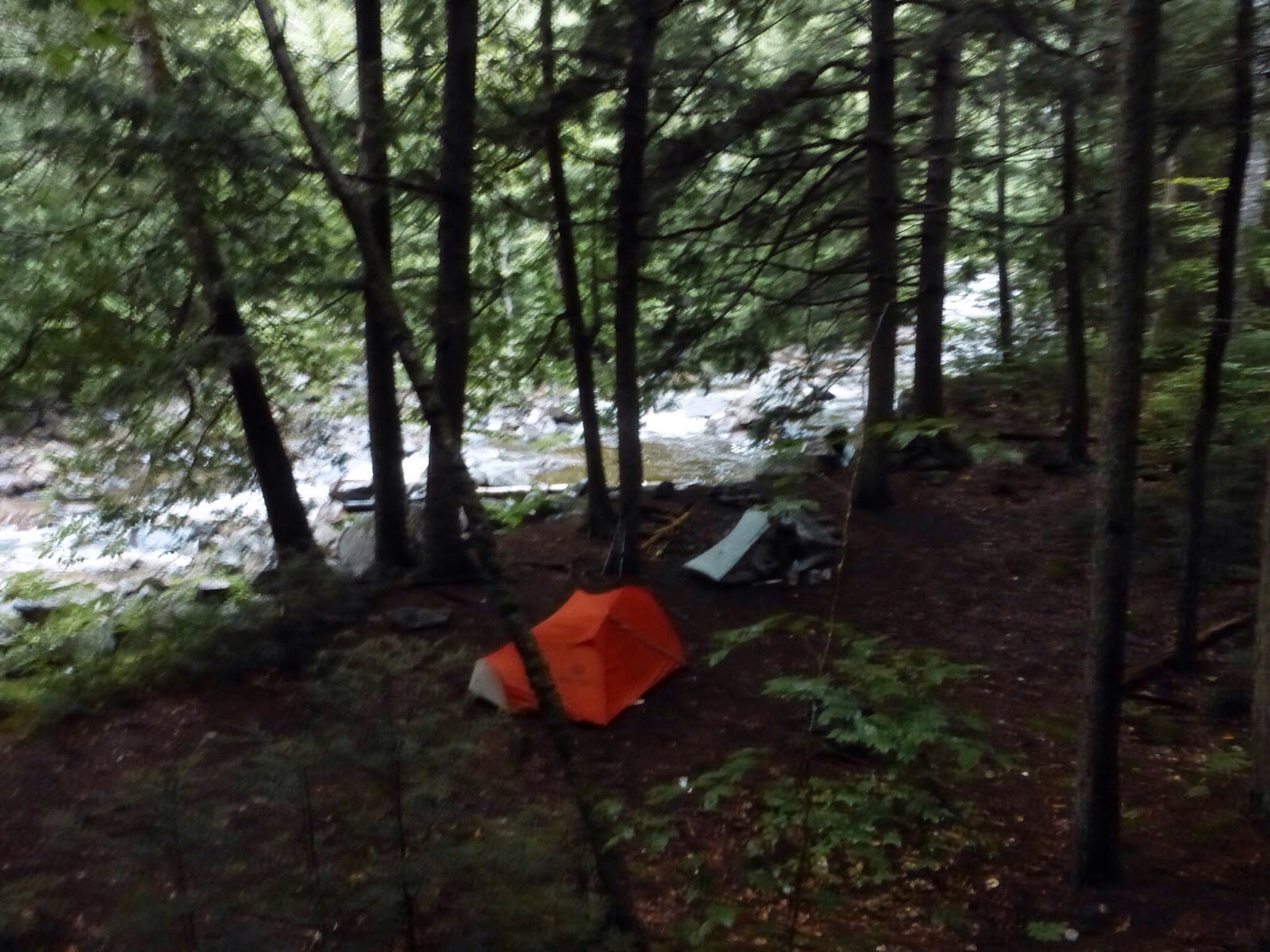 The stream is rushing so loudly that we can hardly hear one another from our tents. Just as we set up, another thundershower rolled through. This time with lightning and louder thunder which we could barely hear over the water. We were ecstatic to have won out on the rain today as we were warm and dry in our tents as the final storm came through. We both also have pretty dry shoes! The white noise of the steam and the rain made both of us quite drowsy and it was an early night to bed. I kept dozing off blogging and finally gave in by 9pm figuring I’d finish up writing in the morning or middle of the night. I was right. It is now 3am and I’m wide awake so I’m finishing up and going to get a couple more hours of sleep. Good night.