The days are flying by and with about a month left before I take off again, I’m at the height of “wiredness.” It’s not good. I feel like I’ve barely been off trail and I’ve over committed in all aspects. I tend to work about 60hrs each week with my one day off being Sunday to catch up on things and ideally plan a bit. In addition to that, I’ve managed to book every free moment with presentations and seeing the select few friends who are patient enough to work around my schedule. It’s so bad that I’ve even cut back drastically on my tv shows with just two hours a week (1.5 without commercials!). Survivor kicks back in again soon, so I’ll need to carve out time for that of course.

As you can see, my priorities are a little screwy at times and I do what I can to procrastinate the dreaded PLANNING that stresses me to no end. I have no idea why I thought it would be a good idea to do a handful of shorter trails rather than one long trail. It just multiplies the planning and logistics! I get an hour here or there each day that is undoubtedly filled by random things like Skyping with my nephews over lunch, planning when to plan(yes you read that right), and creating lists in which “create a list for…” is on the list. Do you feel the wiredness radiating from these words!?

My physical activity has been almost nil the last month and a half. I will go into the Hayduke having done the least amount of physical training of all my hikes. I’ll be fortunate if I find time to do one long hike with pack weight before I leave. The good news there is that my body seems to have accepted that I hike and has kept much of it’s thru hiking muscle memory. The first week will hurt, but I’ll be ok. I am rambling and venting, but I know I bring it on myself, and as a substitute teacher, I can take off any days I please. The plan is to do that if I don’t have things in order by the end of the month, but I hate doing that considering that I already don’t work 5 months each year. I work a lot (substitute teaching/nannying/babysitting) so I can play a lot. It’s all worth it in the end, but I would love to hit the pause button and have the world stop spinning for a few days so I can catch up on things. All of this is good, and I’m loving that I’m living life to it’s fullest, but I just need more hours in the day! The bulk of the important planning is complete, but there are a ton of loose ends. Doing this post is helping in two ways. 1) I get to VENT (solid second to hiking or running). 2) I want to tie up a few of these loose ends that are floating around in my head…

1. On my last Hayduke 101 post, I left out an important paragraph that I have now added, but I wanted to include that paragraph here for those of you that already read that post as it really gets at the heart of what this trail is all about.
Namesake
The name ‘Hayduke’ is one that resonates strongly with those passionate about the Southwest. The influential writer, Edward Abbey is known for his fiction and non fiction writings that spanned over 30 years. Abby’s writing often centered on his love and passion for protecting the sanctity of the Southwest lands, stretching through the national parks that border Utah and Arizona. Those paying close attention would have noticed that while on the Appalachian Trail, I listened to two Edward Abbey books, Desert Solitaire and The Monkey Wrench Gang. Desert Solitaire was a wonderfully poetic book Abbey wrote about his time spent as a park ranger at Arches National Park in the 1960s. The Monkey Wrench Gang is a fictional, and very influential book that centers around a small group of environmental “rebels” that set out to protect the lands from development at all costs. The rashest and most extreme of the bunch was George Washington Hayduke III. Hayduke co-creators Joe and Mike, aptly named the trail after Hayduke. It perfectly captures that unbound and rebellious feel of the trail while also giving homage to the sanctity of the area. 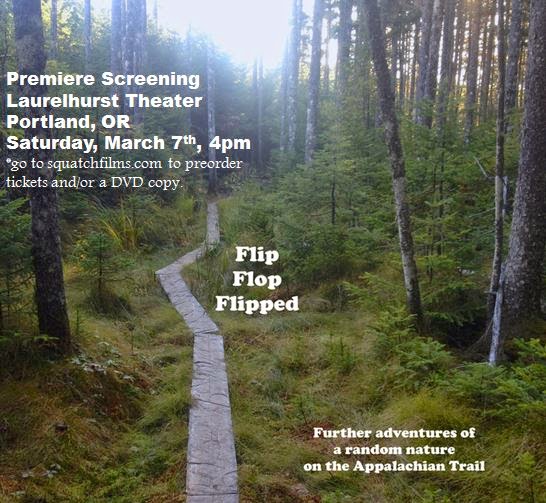 2. The Flip Flop Flipped premiere screening in Portland (that me, the Kallins, Jett Cat, and Lint will be in) has been RESCHEDULED for March 7th!!! If you want to preorder tickets, get a refund for the ones you previously bought, or order a download, DVD, or Blu-ray version, go to squatchfilms.com

3. I’ve added another trail to my list for the summer! I realized I have time to fit in the Lost Coast Trail on the Northern California coast after I finish the Tahoe Rim Trail in mid June. The 56mi trail has been touted by Backpacker as one of the best hikes ever, so I thought I’d take advantage of the timing and do it while I’m headed north. Even more exciting is that LoveNote and Drop-N-Roll (from CDT 2013) will probably join me! If I have enough time/energy after the Lost Coast, I might also do some backpacking in the Redwoods as I’ve yet to go there too.

4. My care packages this summer will be a bit different than past summers. Since I’ll be swinging through Portland in June before the Great Divide Trail, I’ve split the care packages into two halves and will be mailing them myself. Anything sent before I leave March 22nd will make it onto the Hayduke and Tahoe Rim Trail. Anything sent after I leave for the Hayduke will be used the second half of the summer on the Great Divide Trail. At this point, the best thing to send is the MOUNTAIN HOUSE DINNERS…they are a huge treat for me and something I wouldn’t normally buy for myself. The most bang for your buck is getting the bulk #10 cans, but those cannot be sent to a PO Box, so email me if you need an address to send to. I have specifics listed on my Care Package Tab and there is also a PayPal info there for those that want to support in that way. My guesstimated Hayduke schedule is also there if you live near the trail and are looking to trail angel at all.

Whew! It was great to get this out. I will soon have the more detailed (and dreaded) Hayduke planning post up.