Day 5: The Much Needed Pause Button

~17.6mi(GPS said 19mi)
Whew, today wiped me out! Katherine and I both felt it today as we are both experiencing that early hike adjustment. I think we are doing remarkably well given that we are carrying such heavy loads so early on. There’s no way to predict mileage out here, so we have to conservatively aim for 15mi days most days (sometimes more or less), which can have us carrying quite a bit of water if sources are more than 15mi apart. We last got water yesterday at lunch and had a possible source at lunch today, but the guaranteed source was over 17mi away, so we were carrying as if we’d only have the further source. one. With the way I’ve chosen to resupply, I left camp today with 7 days of food and four liters of water. I left camp at 6:40am and Katherine was just ahead of me. I hike a bit faster than Katherine in the morning because she is justifiably being careful to ease her body into this hike. It was still a little dark out this morning as I was packing up, so I placed everything right next to my pack so I wouldn’t lose anything. To avoid losing my headlamp, I put it in its proper stuff sack, packed up everything, and headed out in the early morning light.
Just a couple miles into the day was another one of Nic Barth’s alternates. It was called the Lockhart Cliffs and the description was intimidating for me…so exciting for Katherine. Basically, we would be saving ourselves 3mi of the Hayduke to do this 1mi badass scramble down a cliff. The scramble could be just as time consuming, but we had already road walked for a full day, so we were up for a change of pace. We will do many alternates on the Hayduke and not all are shorter(many are much longer actually), but all our choices are in favor of the more scenic or entertaining route. We’re out here, so we figure we should do all we can. Even if it means getting me out on a ledge at times!
Just like our last Nic Barth alternate, this one had a bit of nice cross country to a seemingly impossible cliff drop. Nic has some spot on descriptions of the route and a fairly good GPS track with waypoints of important spots, which are sometimes spot on. We’ve had a lot of fun with these and Katherine absolutely loves it. I like them for the most part until we get to something that totally freaks me out, ha! Once we were down, we were able to take pictures of what we did looking back on it and it was really fun to see it. Here is Lockhart Cliff and where we a) started up top. b) where I freaked out on an angled ledge we had to scoot down (with a heavy pack!) and almost turned around. c) the cool little boulder cave we dropped down into and out the front. 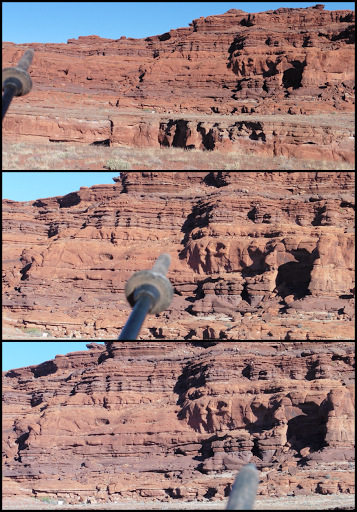 It was fun and the highlight of the day for sure. Here are photos of us going down and through the boulder cave. 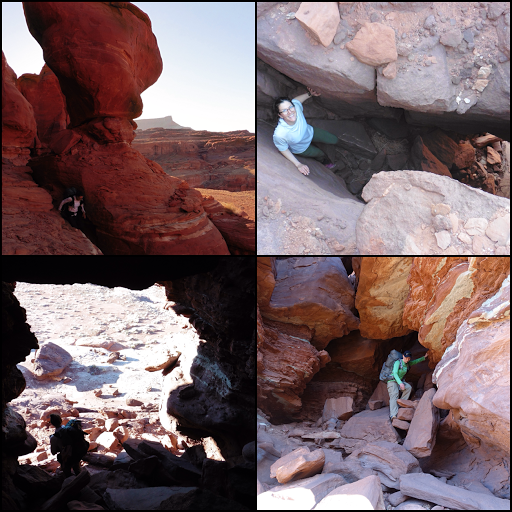 Right after the scramble, we were rearranging our packs when I realized that something was missing! Ugh! I left my Teva flip flops at camp and even purposely laid them next to my pack making a mental note this morning that they were going to be packed in a different pocket than usual cause I was using the pocket they are usually in for water. So annoying and I’ll order another pair as soon as I can. If you’re keeping track, it hasn’t even been a week and I’ve lost a pair of underwear two days before the hike, left my GPS in Moab and it’s being sent to me, and now my flip flops!
Much of the rest of the day was more road walking. It can be monotonous and it was pretty hot at times today, but we are enjoying the warm up. It was supposed to be about 80 degrees, but in the sun our thermometers were reading 90 degrees. I used the umbrella more and am enjoying the added protection since my skin is not a fan of the sun. I am already reacting and have a heat rash on my hands and legs. Fortunately not on my feet yet as they are usually pretty bad with heat rash and welts the first week or so.
There was water at the lunch source, so we were carrying extra water for no reason anticipating another 10mi without water, but it’s better to be safe as I never want to gamble with water. We found a shaded spot and had a 1hr 45min break. We’ve also done a good 30mins or more in the afternoon and I actually need them on this hike. It’s good to have Katherine here to initiate these longer breaks cause our bodies really need them, especially early on. I had so much water that I didn’t need to get any, but here’s what it looks like. Much of the water out here is highly alkaline, so you can see the white powdery minerals on the rocks. 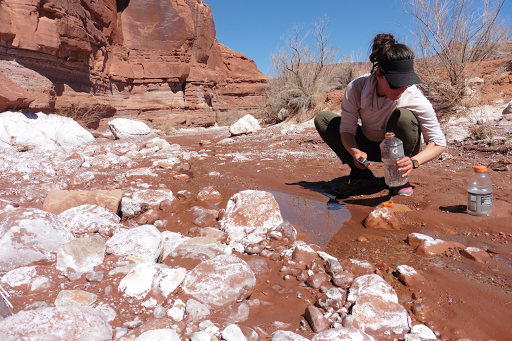 I also want to mention that cow crap is everywhere around these sources and even in the shady spots where we’ve taken breaks. Just like on the CDT, it’s normal to just take a break or be at a water source surrounded by dried up cow pies. We’ve hardly seen any cows and saw two dead ones today. Yes, we volunteered to do this, ha! The last couple hours of the day were spent in Rustle Canyon, which had a few cool pouroffs for us to navigate around or climb down. There was deep sand and it was slow going in the heat. My pinky toe blister has recovered quite well after my master surgery on it last night. It is no longer raw and I was able to keep dirt out of it. My feet are ok on the blister front, but my heels are just in unusual pain. The whole backside (center to heel) feels like one big hot spot or prickly like they’ve fallen asleep. Not fun and hoping they adjust quickly. 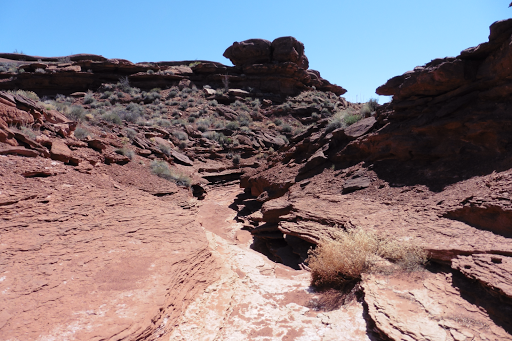 We took a nice long break in the shade with just 3mi to go today, but it was really worth doing and I think not pushing is important on this hike. My shoulders were killing me from carrying so much for the last two days. Also, my feet are needing more time to to toughen up again. They yelled at me the whole second half is the day. 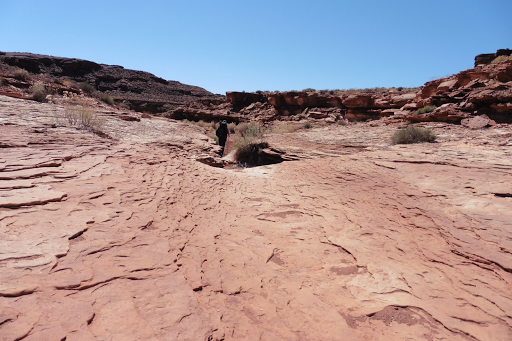 This is the second day with no cell service and it’s actually really good for me. I may not get service for another week and it’s just the pause button I’ve needed. The relaxed road walk along with no contact with the outside world has me headed in the right direction. I needed everything to pause and I’m hoping to get back on track soon! Speaking of tracks, I’m halfway through the audiobook of Tracks and am enjoying. Great book to go along with hiking. Ok, off to bed as I’m dozing off once again! We are camped at Indian Creek and it looks almost identical to our water source earlier today. We won’t see water until camp tomorrow night. Katherine is cowboy camped again and keeps setting up at dark, so I’ll eventually get a photo of that. She’s enjoying the ease of cowboying and not setting up her tent. I’m happy in my little home. 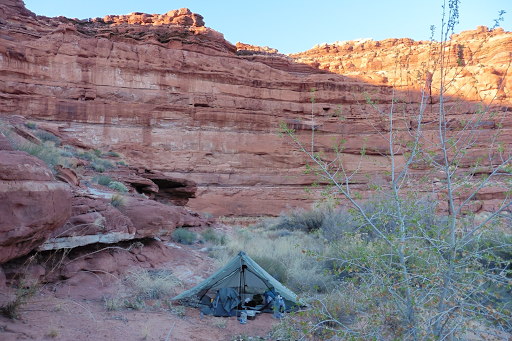