Whew, what a great day! We got going at our usual 6:40am time and immediately headed up the vertical Sundance Trail. Such a great decision to do this in the morning rather than last night! Here is Katherine with her headlamp as we headed out. 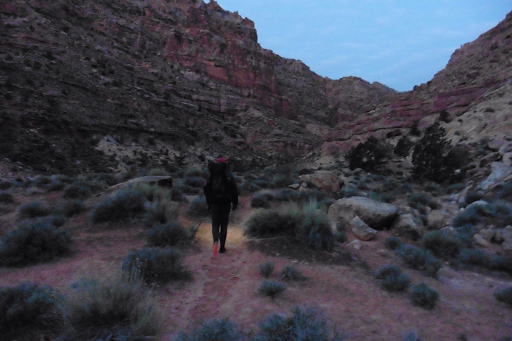 Looking back on the climb up as the sun was rising, we could see down Dark Canyon where we were yesterday. Really cool! The 1mi climb took and hour, but at least it was a cairned route with switchbacks. I would not recommend that climb in the heat of midday. 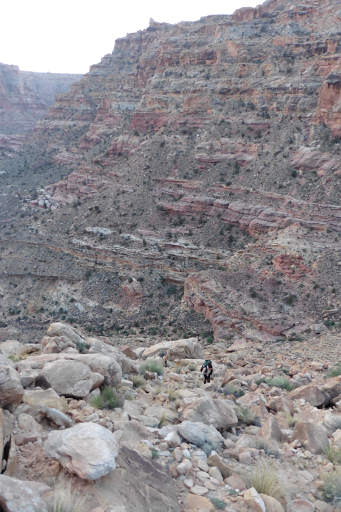 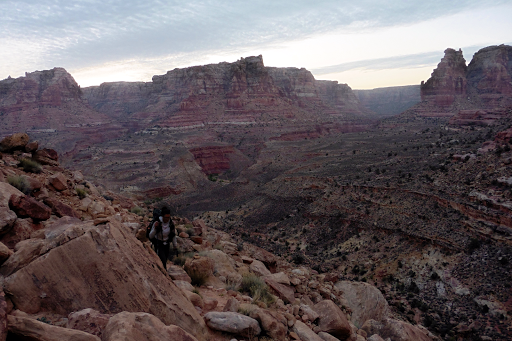 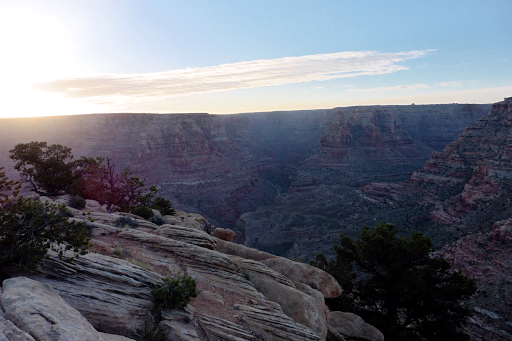 We then had about 12mi of road walking to Hite. It was really nice dirt roads and we had light packs, so it was quick miles and wasn’t bad on the feet. We could see the Henry Mountains, which we will pass over in less than a week and is the highpoint of the Hayduke. It’s exciting to see and we are looking forward to it! It was also really windy all day and cooler out with a front coming through. 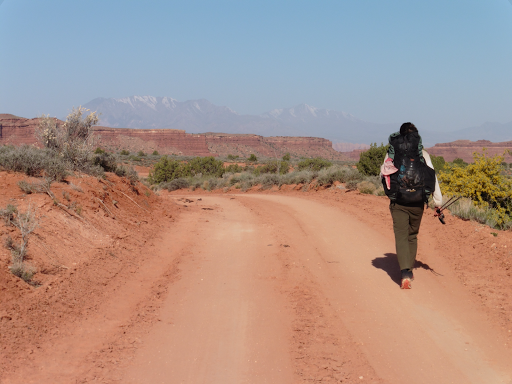 Road walks can be slow miles mentally, but I was excited to listen to audiobooks. Then I realized I was headed into town and could use up my phone battery and watch some shows while walking! I know many of you are totally cringing at this, but it totally made the morning for me. I have lots of movies and shows loaded on a SanDisk iXpand and can watch on my iPhone. I watched over four episodes of Transparent as I walked and loved it. The time just flew by! I have my friend Brian to thank for this particular series, so THANK YOU Brian!
There was a lot of uncertainty heading into Hite Marina. In short, there is a ranger station, camp ground, marina, and gas station/general store. We were warned that possibly none of it would be open and that mailing a box is iffy at best. The general store was to open starting yesterday from 11-2 each day. In talking with people in charge of staffing, they kept saying it would be open, but deep down we could tell something wasn’t right. We convinced the amazing postal people to leave our resupply boxes outside even if the place was closed and just had to hope our things would be there. If they got stolen, it was just food and we’d have to do a long hitch to a nearby town as a back up. There was a 1.7mi paved road off trail to get to Hite and as soon as we got on the road a bit, two men, Marcus and Chuck, were walking towards us having come from Hite(we had apparently hiked by their Winnebago on the dirt road no far away). They warned us that everything was closed and that another Hayduker was down there. Right after that, we got a hitch and that saved us the extra paved road walking! We prepared ourselves for the worst and couldn’t believe how fortunate we were with what would transpire… 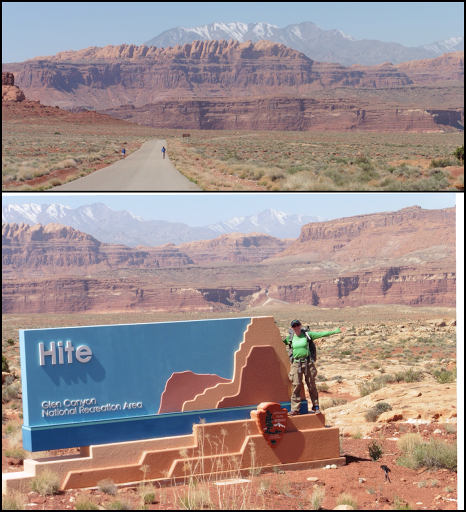 When we got there, Hayduker Gavin was there. He was the footprints we’d been seeing that I swore we were close to. He started two days before us and it’s fun to meet another Hayduker. I’m sure he was equally happy to meet some others too. He knew I was hiking and we actually have mutual friends from the PCT community (he hiked some of it in 2013). Also there was Susie who stopped by to check out the ranger station and had been out exploring in the area with her dog. Susie had extra food and a portable stove, so she gave us eggs, black beans, avacado, and tortillas to make egg burritos. It was so gusty outside, that I moved into the bathroom to make them, ha! Hit the spot as we were all bummed to not get anything special to eat from the closed store. Then to make things even better, Marcus and Chuck showed up with their Winnebago and gave us each some of their homemade beef stew! We stayed for 3hrs chatting, charging electronics, eating, organizing our resupplies, and doing chores. At least the bathrooms were open and there was running water. It was great and we joked that although the town was closed down, we made our own town and Susie’s dog was the dog was mayor. The state Rangers and maintenance guys even came by while we were there and we got the scoop on everything. 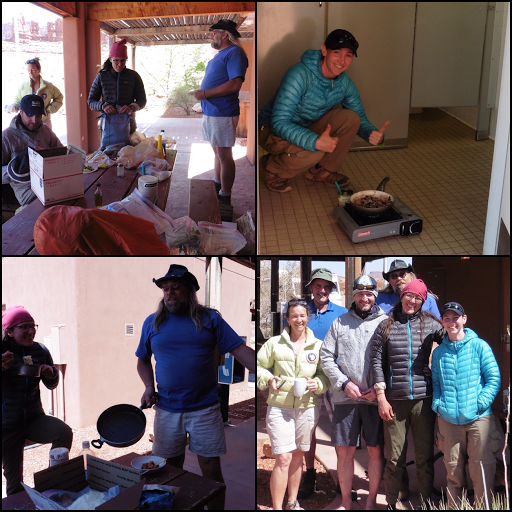 We had planned to take it easy and hang at Hite, but there was nothing to stay for anymore and we realized we could do 6 more miles to hopefully find a less windy spot for the night. Chuck and Marcus let us fill up our water in their Winnebago (long carry of 7L/14lbs for me and 8L/16lbs for Katherine) and gave us and Gavin a ride down the road back to trail and we were off. THANKS to Susie, Marcus, Chuck, and the postal guys for making this stop so great! It could’ve been a real disaster! It was a memorable day for all and a great example of how the trail can bring all sorts together. 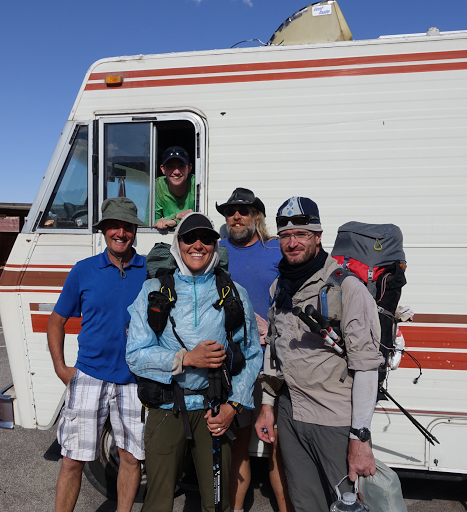 Once back on “trail” we had a brief cross country scramble over a seemingly cliff wall and then road walking to the wash we were to head down. It was nice have the road walk to get to know Gavin and we are all camped together. It was really windy and temps continued to drop as it should be a low of 30 tonight. I kept trying to get photos of Katherine to show the wind and dust flying. She got one of it coming at me and Gavin. 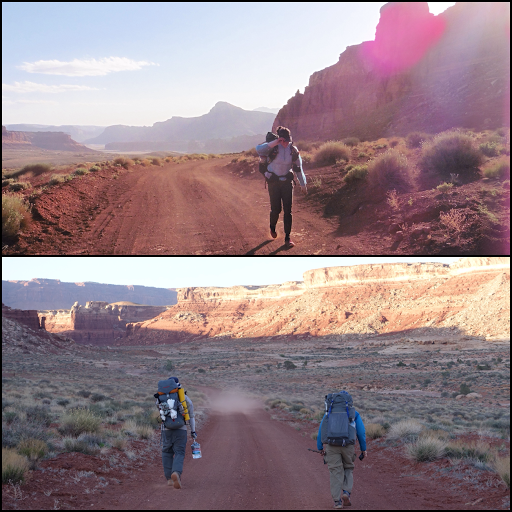 We found a rock shelf that will hopefully block most the gusts tonight. I have become a master at setting up my ZPacks Soloplex using rocks to stake it out since it is not a freestanding tent. Katherine found a pocket shelf in the rock that was warm and sheltered, so she’s giving it a try as she’s not a fan of a wind blown tent all night. The moon is almost full and lighting up everything. Just a really great day! 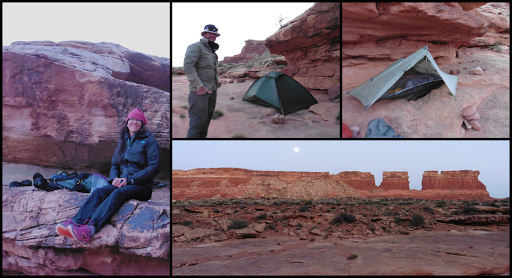 Of course our planned relaxing half day if hiking turned into our biggest mile day thus far and we just can’t seem to help it. We will get to Hanksville in three days and then luxuriously zero hopefully!