Today was one of those days where so many widely different things happened that it seemed like many days. I have a feeling a lot of days will be like this on the Hayduke with so many different milestones in this hike. Today was three fun and quite different events. We got going at 6:30am. Gavin likes to get a later start and we knew we’d probably see him again today or tomorrow. Thankfully that strong wind from yesterday was gone and it wasn’t as cold overnight as we thought it would be either. Probably around 40 degrees or a bit colder. We had just two miles of walking in the wash until a Class 4  chimney climb. The canyons we were in today have a whole new look and feel to them than the others we’ve been in. Each one I enter becomes my new favorite! Of course, pictures just don’t do any of it justice. 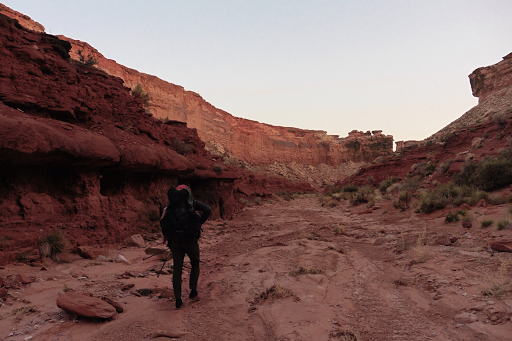 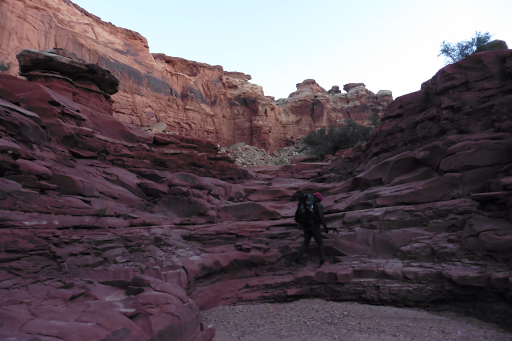 The chimney climb was one of those things I’d have no problem doing without a pack. The rock is grippy with great handholds, but there is such a thin crack that it’s impossible to get through with a pack on. Alone you’d have to use a rope to pull a pack up, but we were able to hand the packs up. They were both quite heavy with about 12lbs of water in each of them and I had to do some of the water separately to even lift it over my head and up to Katherine. She honestly did most the grunt work with a lot more strength than myself. On her initial climb thorough the crack, Katherine sadly tore the arm of her new down jacket and it was like snow with all the feathers flying out. It was a fun way to kick off the day! 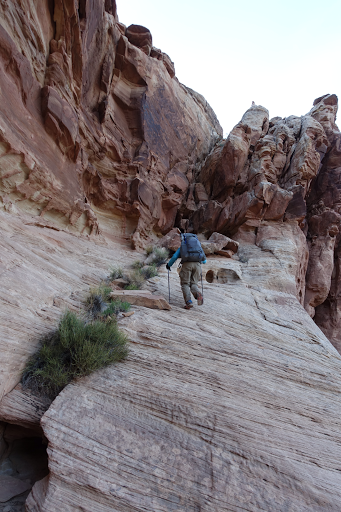 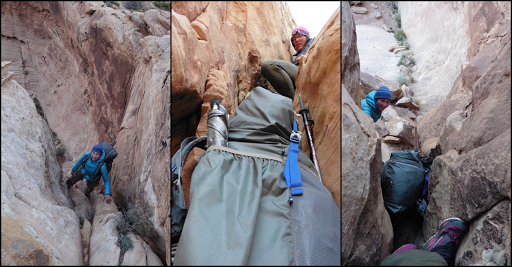 Next up was about 8mi of cross country through an area called Red Benches. An area with a ton of washes and countless ways to go. We did our best to stay high and contour to avoid dropping into washes just to climb right back out. Sometimes it made me think of Mars with all the reddish rock. 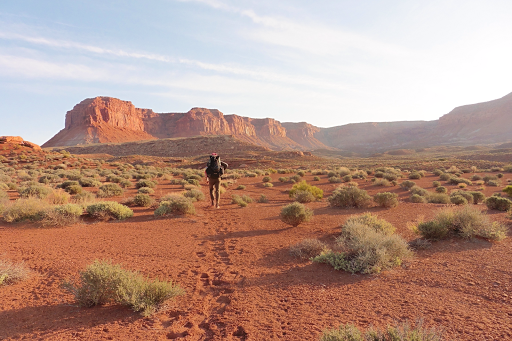 Halfway through was an 8ft tall cairn called the “Jenga” cairn. Here it is with the Henrys we will be crossing in just a few more days, oh boy! 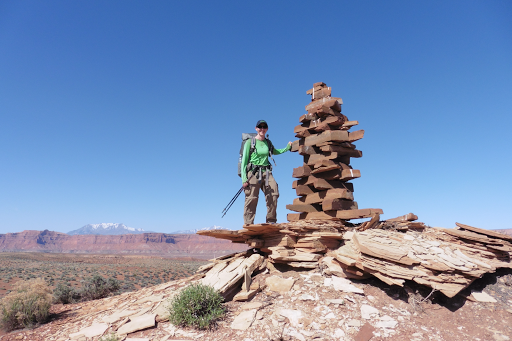 Next up, was the jagged and grand Fiddler’s Cove Canyon, just WOW. Here it is from the top just before we scrambled down to the wash and a shot from in the wash. While in there, some of the tall towering rocks seemed to be impossibly tall and thin. I had the feeling that many of them were like those paintings of people where their eyes follow you as you walk by. It wasn’t creepy, but more like they had been there for centuries and I was in their home. 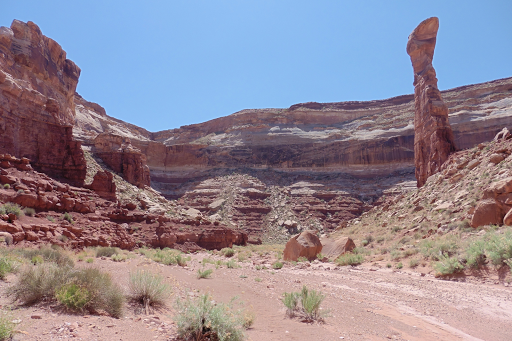 We had a choice to make the last third of the day. Hike just over 5mi along the Dirty Devil River with many crossings, brush, clay, and quicksand, or do 9mi on an alternate to avoid the river. We decided to go for the Dirty Devil as we knew it would be a unique experience and that’s what we’re here for. It took about 3.5hrs and was a good time. The water is very silty and contaminated, so it is advised not to drink it. The other tricky part to it is that it’s so cloudy that there is no way to see what you’re stepping on or into. We crossed the river 10 times and carefully used our hiking poles to feel our each step checking for quicksand or drop offs. Much of it was brush and sandy walking well away from the water. There’s a photo of Katherine all clean before we got going and then each of us on crossings carefully feeling for drops or quicksand. 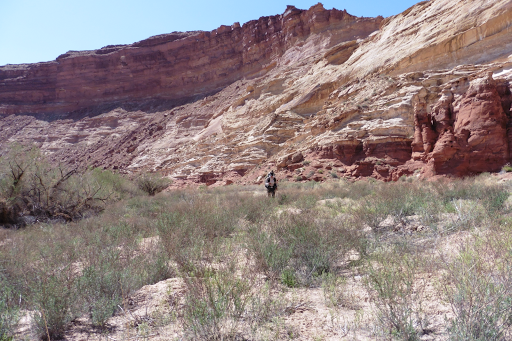 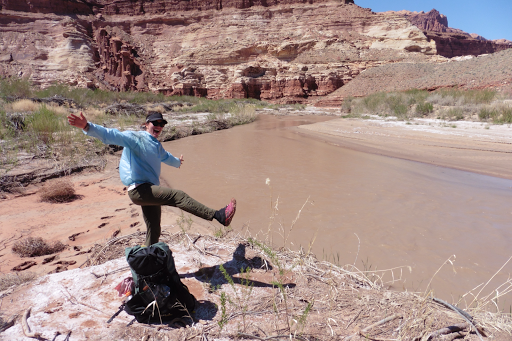 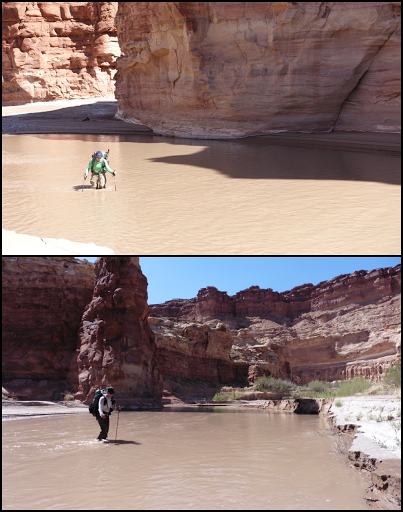 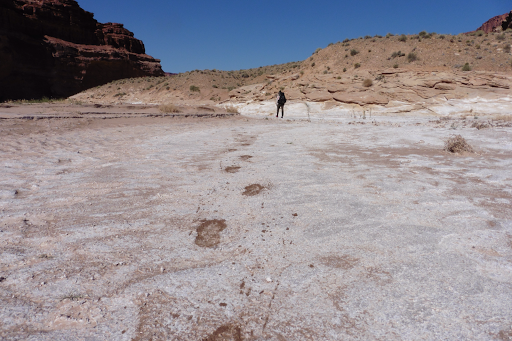 We had a good time with it and it was hard to believe so much happened in one day! Right towards the end of the Dirty Devil, I was leading and we were in conversation when I somehow walked right into deep quicksand that quickly sucked me down to over my knees. When I tried to lift my legs out, the suction took one of my shoes off. Somehow my gaiter stayed hooked enough to the shoe that I didn’t completely lose it and Katherine was able to reach out and get my shoe and help detach it from my leg since I was still sucked in pretty good. Katherine was able to help pull me with my poles (think the Atreu scene from the movie, The Never Ending Story) as I pulled with all my might to get my legs slowly out of the insane suction of the quicksand. Definitely would have been frightening alone, but we were laughing throughout the whole process. We even paused to photograph the unbelieveable predicament, but it was sucking me in tighter and I didn’t want to push my luck. We did get photos immediately after I was safe again, whew! You can see how deep it was on my pants and my pole is in the quicksand. Notice it closes right up and looks like solid ground that we had been walking on the last couple hours, so very deceiving. It’s slightly darker where I was like mixing batter after its sat for awhile and it swirls a bit. I’m holding the shoe I almost lost. 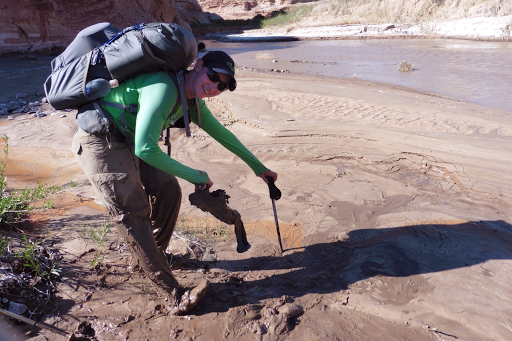 The last couple miles of the day was on a four wheel drive road and we have about 12mi more to do on the road tomorrow before we hitch to Hanksville for a ZERO! We almost went a full day without seeing another person when two guys in a Jeep drove by and chatted a bit with us. So close! Gavin hiked by while we were having dinner and he too had a great time with everything today. He is camped not far up the road as he was looking for a more sheltered spot from wind to cowboy out. None of us expected to get this far today, so we are excited to get to town a day earlier than expected. Just a great way to wrap up the first quarter of the Hayduke! Check out the full moon! Cold one tonight in the 30s. 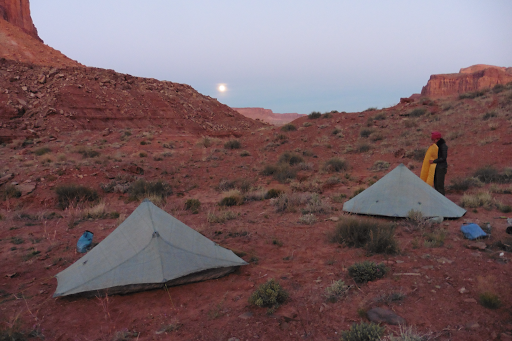