Granite Creek(223.4)-Tarantula Mesa Spring & Trough(237.7)
14.3mi (GPS says 16.6mi)
**Note: I’ve been using a new app, BlogTouchPro, for this trip and am still working out the kinks with the wonderfully helpful developer. Blogger sucks and has been reducing the photo resolutions, so that is why my photos are slightly less crisp and clear as I’d like. My plan is to fix all that with full resolution photos after the trip, but the app developer hopes to soon have a way around this and have the update up so this won’t last the whole trip. Some of you may not have noticed, but it really gets my perfectionist side riled up and we hope to have it fixed soon!
Man, today was a butt kicker! Last night, both of us apparently needed sleep because we both fell asleep before it got dark and then overslept this morning. I was up on and off through the night with the sound of winds that were thankfully swirling well above us mostly. Also, it got below freezing and I wasn’t comfortable. I wasn’t shivering and didn’t put on my rain gear, but kept needing to lay on my stomach and arms to warm up with the heat reflection of the the NeoAir…but that position was u comfortable, so I’d do that for 30mins til I got warm enough to roll onto my side for an hour or so until I needed to repeat the process…probably should have just worn my rain gear for the extra warmth. I woke up 20mins later than usual and yelled over to Katherine who was also fast asleep. We didn’t mind the late start with how cold and windy it was. Katherine had that it was 28 F and that wasn’t counting the strong wind. We got going just before 7am and within half a mile, we passed Gavin who was just getting up. It was so uncomfortably cold and windy that we all just said a quick hi and continued on. My Panasonic LUMIX camera is frustrating me because it won’t take pictures in the cold and I remember this sometimes happening on the CDT. It goes on and will zoom, but the screen is just black and won’t take a photo. I have to remove the battery to get the lens to go back in. It’s happened a few times in early mornings on this trip and with the cold weather today, it was half the day, so I had to use my iPhone and the ones Katherine took for my Mt Ellen photos. Here you can see Katherine hiking up the road with significant snow. It was so cold that we were easily on top of the snow and that was the fortunate part as you can see others postholed quite a bit. 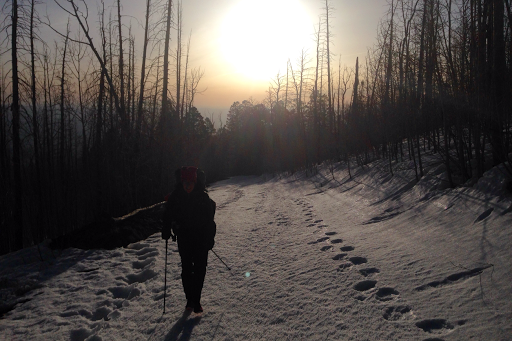 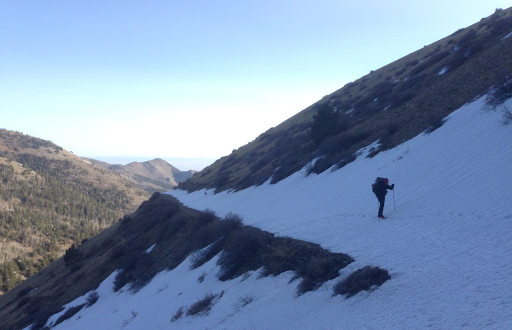 We had four miles to do and about 2,500ft to climb to get to the 11,419ft South Summit of Mt Ellen. It was very slow going and exhausting with the wind. It had to be well below zero for us most of the time. It was a fairly gradual road walk (with snow on it) for most of it and the last mile or so was up a steeper ridge line. My water hadn’t frozen in my tent overnight, but it did as we hiked. 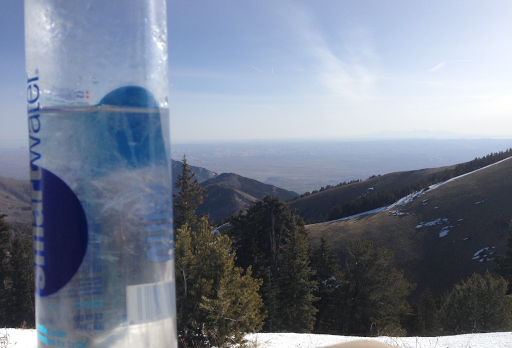 The snow was solid and easy to walk on top of most of the way, but when we hit the ridge line and were going steeply up in the trees, there was some postholing that was tiring. 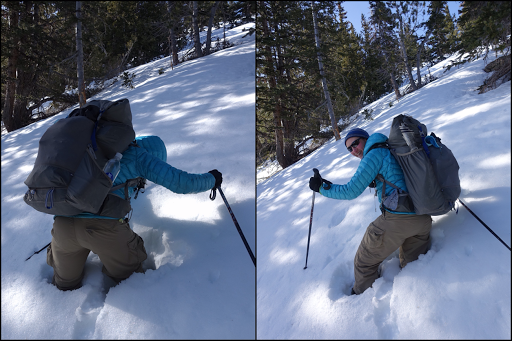 It was so cold and windy that both of us wore our rain gear on top of everything most of the first half of the day for the added insulation. Man it was exhausting in that cold wind and we could see the desert below that we were headed down to. 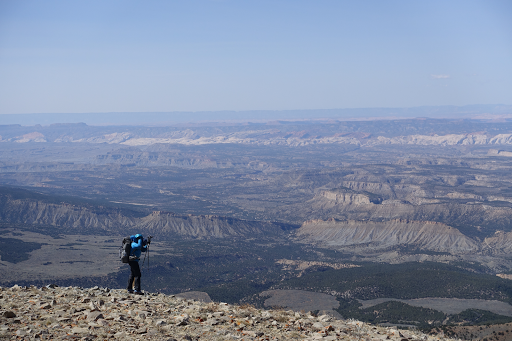 When we did make it to the top, there was a building we crouched behind to warm a bit. The whole way up Katherine’s hands were really numb and cold and we took breaks so she could warm them in her coat. For me, I had stupidly taken off my rain pants before the exposed ridge line and my thighs were the coldest part of me. I was able to get the rain pants back on while we were huddled at the summit. We jumped out to take quick summit photos and then headed down. 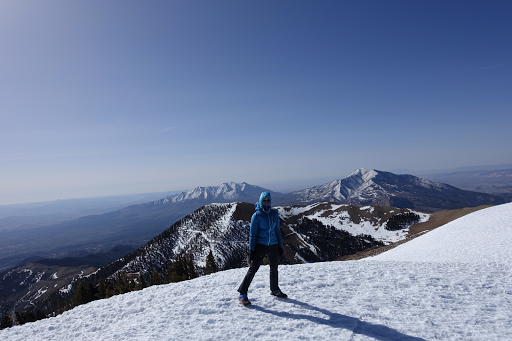 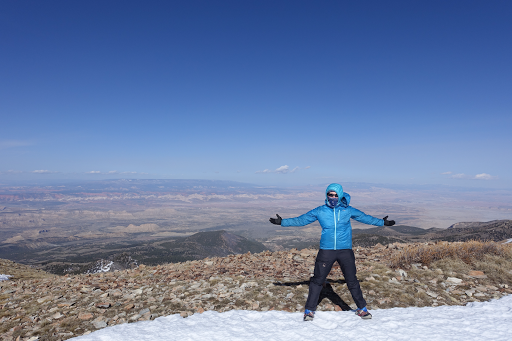 Going down was also quite challenging. We were spent, but the cutting wind was relentless and now we had to hike straight into it. Just staying upright was difficult. 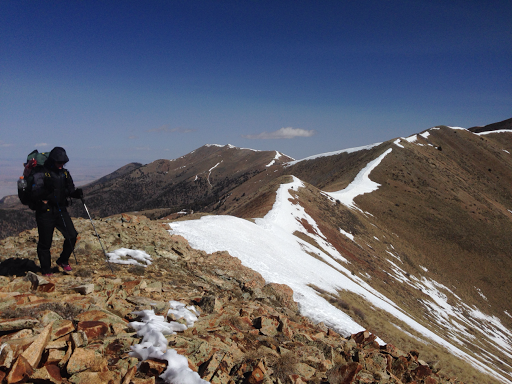 I got down a bit faster as I tend to do downhills faster and I was motivated by the fact that I had needed to dig a hole since I woke up this morning.  It was way too cold for me to muster the strength to pull my pants down in the morning, but now it was becoming more urgent. I saw that we weren’t far from our anticipated water and break spot, so I booked it that way. There was a fork in options when a couple dirt roads intersected and I did not look at my map and GPS well enough to notice that I took the wrong fork…until I was already at the bottom of a .3mi hill. I had to turn around and hike back to where Katherine had now taken the correct turn and was ahead of me. It was a STEEP and BRUSHY .3 downhill cross country to a possible creek. I saw Katherine in the distance below and hustled down to catch up as she probably didn’t know I’d missed the turn. I still had my rain pants on and I carelessly threw my gloves in the the lone pocket and on the thigh before barreling through the brush. By the time I got to the bottom, I realized my gloves had fallen out! Shit! It was such a steep .3mi and there was no trail. I had just bushwhacked through. Katherine waited at the bottom while I dropped my pack and went back up into the brush, almost to the top, before I gave up the search. Looks like my sleep socks will have double duty as my gloves for the rest of this leg, ugh!
Once down in the dry creek bed, we realized we had been hiking for 7hrs and had gone about one mile per hour. Yep, it was a tough day. We had a couple hours following the creek bed which became a brushy, rocky, unstable, wash. There were a couple detours up on a ridge we had to take to get around some impassible pour offs. We were both drained, but we didn’t take a break today because we wanted to make sure we made our water source at the end of the day. There was a point in Sweetwater creek/canyon that there was a tiny trickle of water. We took the time to grab some from it just in case we didn’t make our water source tonight. It was a tiring wash to get through on a normal day, but doing it right after the rigorous morning we had made it really tiring. It was the loose crumbly nature of it that made every step difficult and unstable on already worn out legs. Here is one of the detours above the canyon. 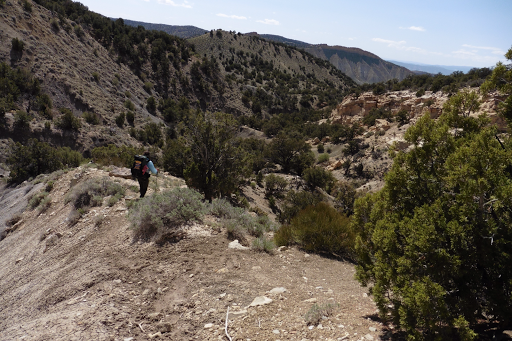 Halfway through, we noticed there’s an alternate that would have kept us high and out of the wash and we both wish we had taken that one! At one point we stopped a bit while Katherine got something out of her shoe. I had checked something on my phone that we discussed and we hiked on. Five or ten minutes later I noticed I didn’t have my phone! WTF is wrong with me!? We had been doing some cross country navigation and once again I had to go back (for the third time today). I had to find the random spot where we had stopped and yes, my phone was still sitting there right where I left it. I was sooo annoyed with myself!
The end of the day was on dirt roads for an hour or two in an area called Tarantula Mesa. 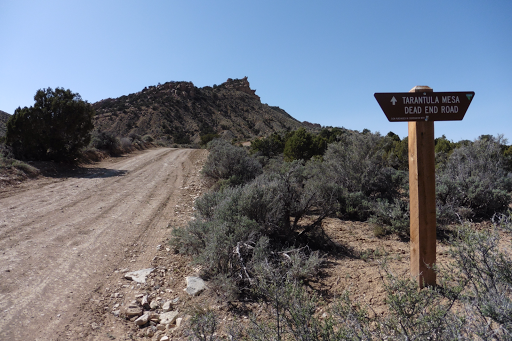 We got the first water source (a trough) at 5:30pm and knew the next one was something like 3mi away and not as specific on the map as the first one with notes saying the distances were “off” but no details. We discussed it a bit as our initial goal had us going a couple more miles and we decided to call it a day since we both were already pretty spent and this was a for sure water source. These early campsites are totally worth it and somehow I need the extra time out here. It’s already 9pm and I’m almost done with this entry, but I’m struggling to stay awake. It’s still gusty and I’m chilled to the bone just from the day, so I have my rain pants on over my wool pj pants and it feels oh so warm! We are camped where we can see Mt Ellen and the never-ending ridge we came down. It’s looks so far away to think we were there this morning. Really cool! Another note about today is that it was the first day that we didn’t see other people that weren’t Haydukers. Technically, we saw mining vehicles moving around way below us as we went up Mt Ellen, but we’re not counting that. Ok, I’m spent and going to crash! 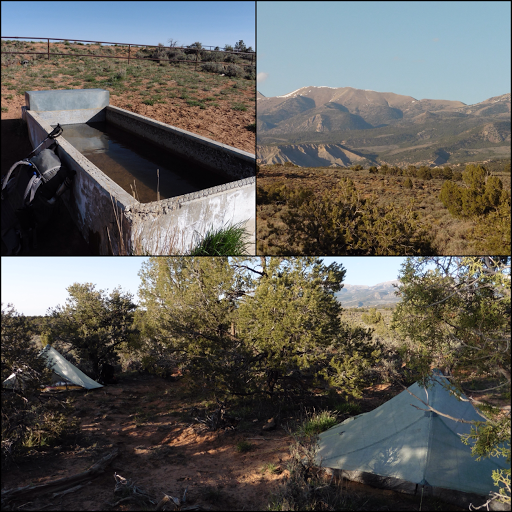