Beginning of Halls Creek Narrows(279.4)-Side wash before Stevens Canyon(295.9)
16.5mi (GPS says 21.3mi)
**There is a lot of inquiry on beta for this alt route. If you are not able to get Li’s maps with the alt on it, another great source is from Jamal at the site, Across Utah! He has full photos, description, and even waypoints/tracks on an online map of this alternate.

Again, man what a day! The Hayduke really packs it in there! We spent the day on the Li Brannfors alternate to the Escalante River called the Stevens Cyn/Halls Creek alt. Gavin camped nearby and didn’t have maps of this alternate, so he got up early and joined us for this jam packed day. The main even of the day was the Halls Creek Narrows, which is 4.4mi of surreal narrows. We knew we’d be getting wet at least up to our thighs, so we waterproofed our bags and were ready for some early morning cold water wading…but we knew it’d be worth it! It started out with one of those epically insane sheer walls that can’t even be captured in a photo. 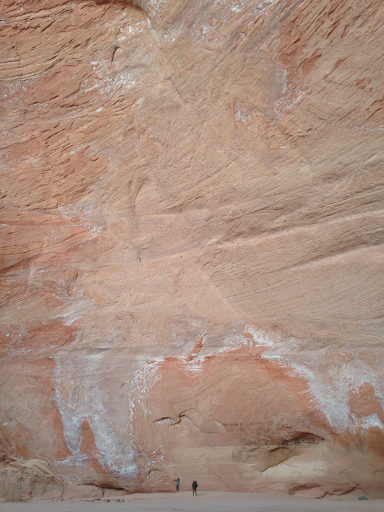 The rest of the way was just one surreal picturesque scene after another. The water was fairly cold and we’d wade into the water on and off. The highest was up to my butt and Katherine accidentally stepped n a spot that went up to her ribs after me and Gavin had gone through, so it wasn’t clear enough to see the bottom. I was very happy to have my rain pants on and was comfortable except for cold toes…sooo worth it! Again, so many photos and the full set will make it in my summary sideshow in a couple weeks. Here are some highlights from the Halls Creek Narrows. Hardly anyone chooses the full original Escalante route these days and I have a feeling the Stevens Cyn/Halls Creek alt will quickly become the favored route. 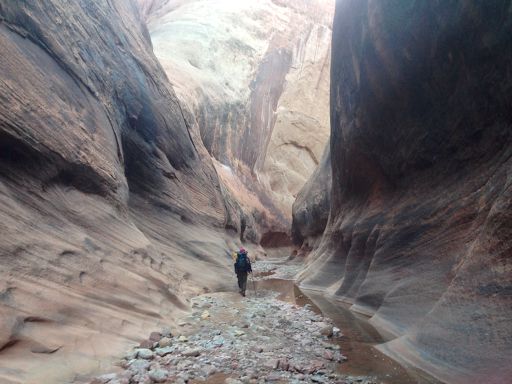 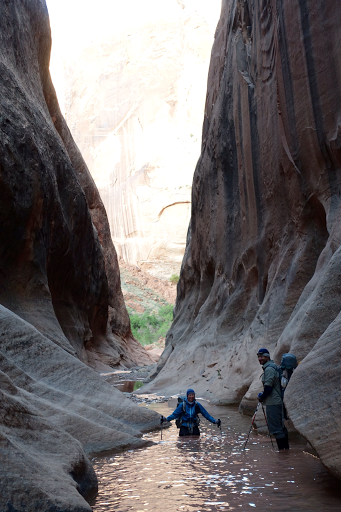 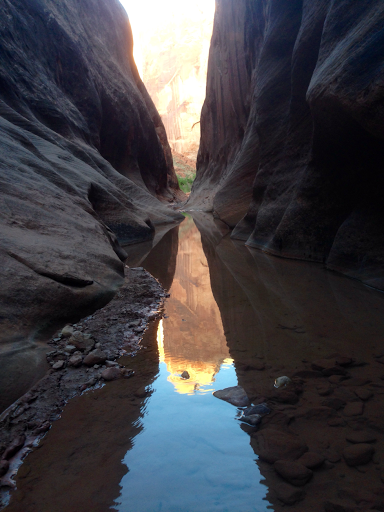 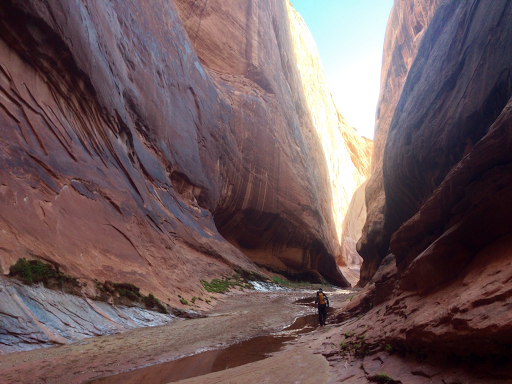 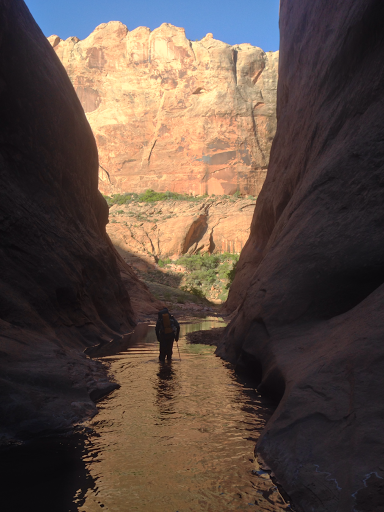 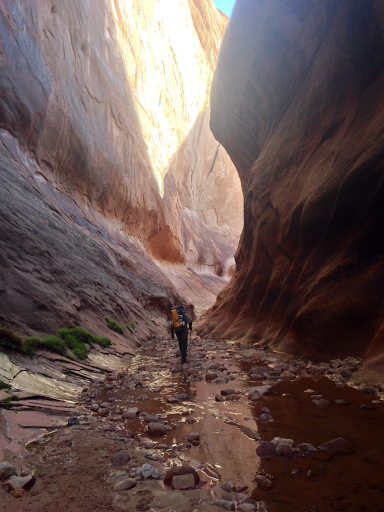 We then spent the next few hours slogging through the deep, clay-like sand of Halls Creek. We all took it in stride, but it can be slow going for many miles and there is also much brush and crossing as the creek weaves all over. We had lunch along the creek and had to push through some crazy tamarisk to get to our next adventure. 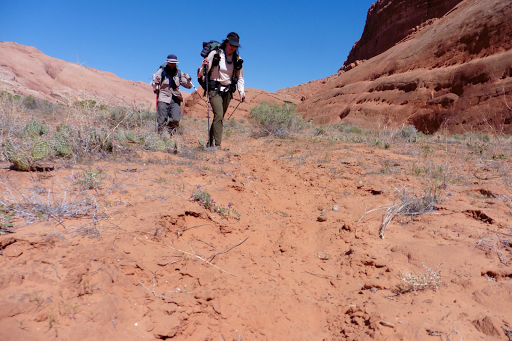 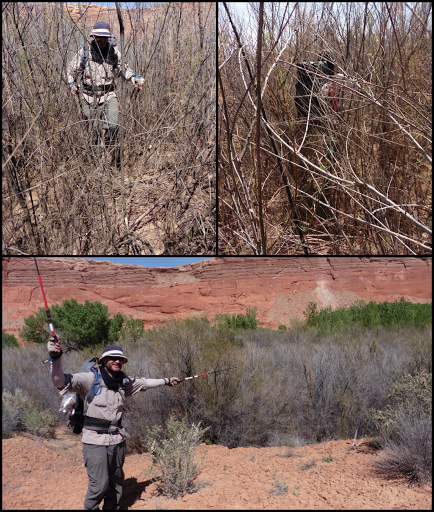 There is this massive land feature called Waterpocket Fold and it is basically a huge upheaval of land that stretches for 100mi. That was what we crossed over when we did the road switchbacks two nights ago. Well, today we had about a 2,000ft climb on slick rock over the Waterpocket Fold. We all agreed that it was a pretty incredible experience to navigate on the various contours of the slick rock. The silliest part is that much of it had cairns to help navigate, but they were really tiny, and many times not visible until you were already there, which kinda defeated the purpose. Still, nice to have a fun eye spy element to the climb and little confirmations that we were on the right track. 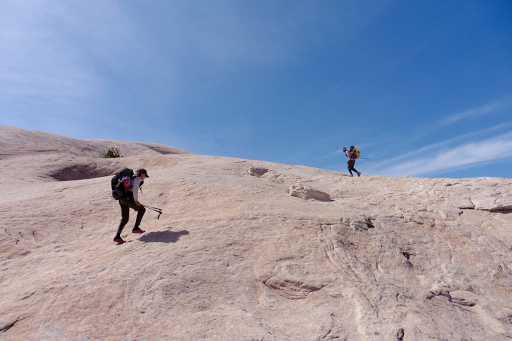 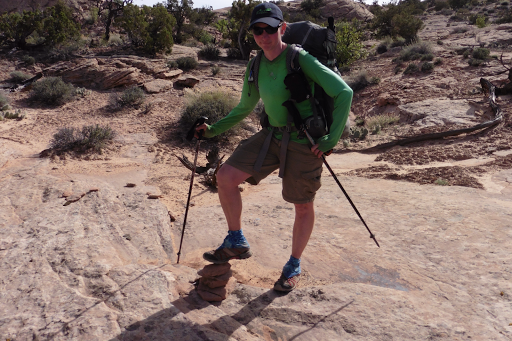 Looking back we could see the very low Lake Powell and the Henrys which we came over a couple days ago. Quite the views! 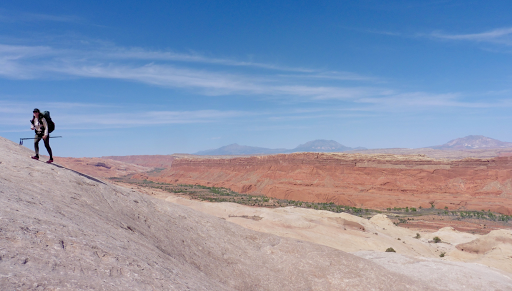 Once up top, we got a great view of what lies ahead and cell service!!! Katherine and I loaded emails to read later, did very quick calls to check in with family, and I got one blog loaded before we needed to move on. Here we are in action… 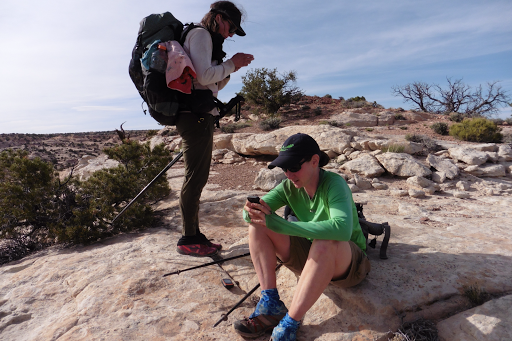 After Waterpocket Fold, we headed down towards Stevens Canyon. It was like dropping into the Garden of Eden at times. 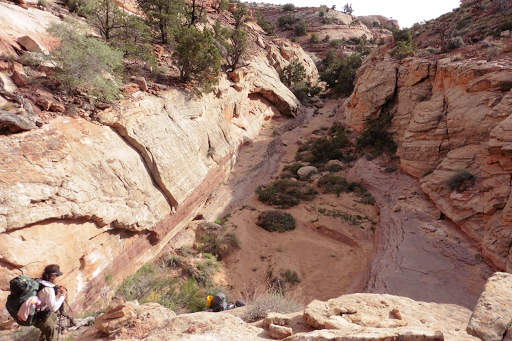 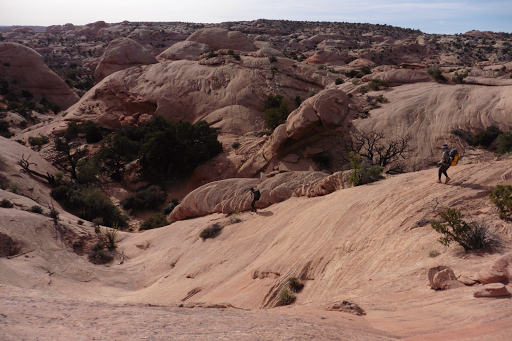 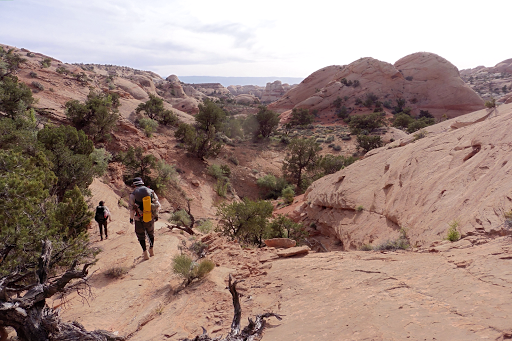 We just did the first couple miles until we found a pothole for water and stopped to camp at 6:20pm. I’ve eaten a ton today and was excited to eat an extra dinner I had for dinner after already eating a dinner for lunch. Thanks to Chris, Charles, and David for the Mountain Houses I purposely saved to carry on this 7-8 day leg. Love em! Again, what a day and I can’t believe all the stuff this hike packs in! Maps say we did 16.5mi and it surely felt like more. The GPS had 21mi, but it was also thrown off in the Narrows, so somewhere around 20 probably. For the second time this leg (and trip) we saw no other people either!