Side wash before Stevens Canyon(295.9)-Coyote Gulch Natural Bridge(310.9)
~15mi(GPS says more, but way off from narrow canyons today)
**There is a lot of inquiry on beta for this alt route. If you are not able to get Li’s maps with the alt on it, another great source is from Jamal at the site, Across Utah! He has full photos, description, and even waypoints/tracks on an online map of this alternate.

Yet another one of those epic days the Hayduke seems to pack into so many of its days. Man, it feels like this seven day leg alone has brought us more memorable moments than a whole thru hike usually does. We got going by 6:40am and Gavin joined us again for the day as we completed the Stevens Canyon portion of the alternate to hiking the 25mi slog up the Escalante River. This alternate certainly lived up to the hype as we had even more unbelievable hiking today.

We knew we were entering Stevens Canyon and we were expecting to drop down into the canyon fairly quickly like the other canyons. It was a wonderful surprise that we actually spent the better part of the morning up above the canyon on slick rock above the rim. We pretty much had an aerial view of both the canyon and surrounding area. Really amazing and all three of us just loved it! The lighting made photos more difficult and kinda flat this morning and again do not do it justice.  Good news is my camera was working though! 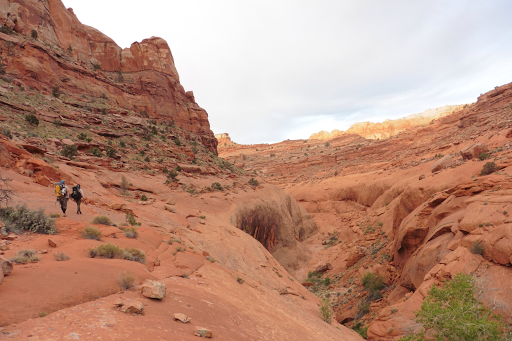 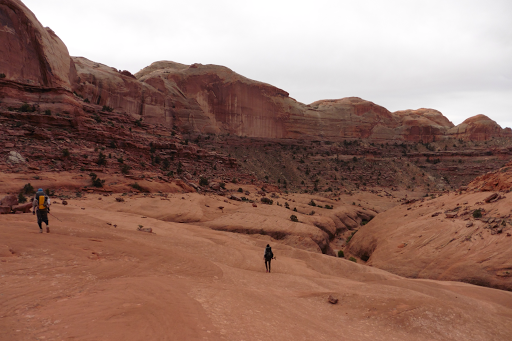 There was one sketch part where the rim got a little too close for comfort to a sheer drop down to the canyon bottom. Classic Hayduke insanity and I wouldn’t expect any less. I never felt freaked out and I don’t like exposure, but we were on loose brittle “rock” basically maker of hardened mud and all it would take is one loose section to slide down. Whew! I tried to get a good photo as Katherine and Gavin were ahead. 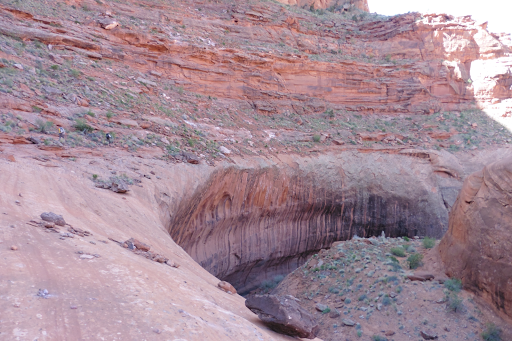 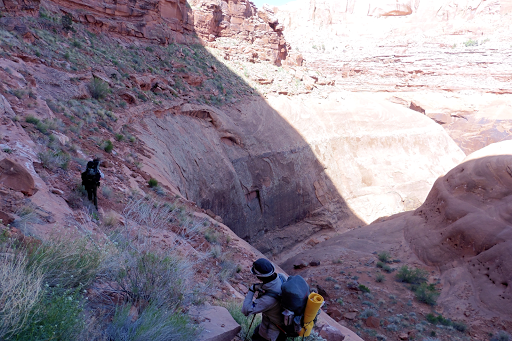 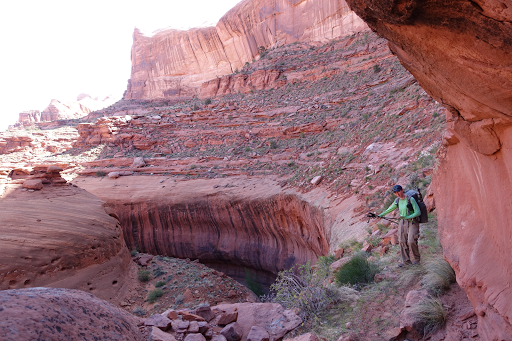 Later in the morning, we finally dropped down into the canyon for a few hours. Man, it was really slow going. Very pretty in parts and plenty of water, but lots of brush, water, and POISON IVY to negotiate.  If none of us get it, we’ll be amazed. We made it through this section with just one set foot out of six (mine, ugh!) and Gavin slipping going down a steep muddy seep so he got lots of mud on his pack and backside. We considered all this a win with how much there was to get through. Man, it was slow going, but still amazing and surely the alternate that will most likely become a favorite and highlight for many hikers. 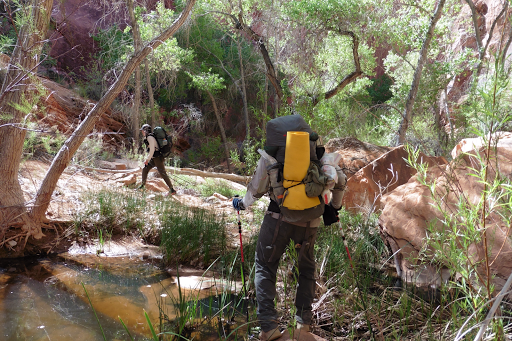 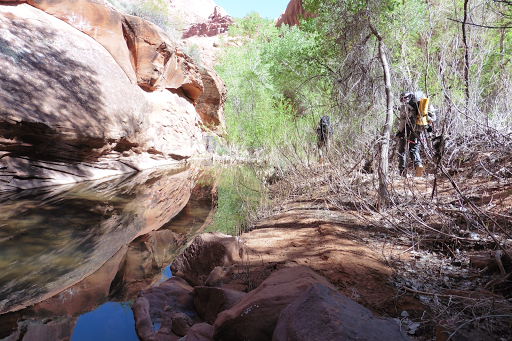 The final part of the day, we reconnected with the official Hayduke along the Escalante River for 1.5mi. The original route would have us walking in/along this river for over 20mi! We did. This short stretch and it was beautiful (clear aqua teal color) and surreal to walk in a river, but 1.5mi was enough. Some people pack raft that section and we could see easily doing that with even those kid float boats. 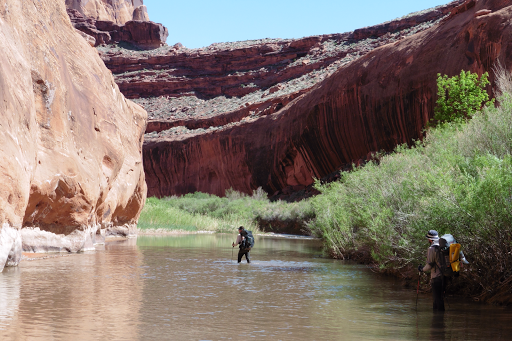 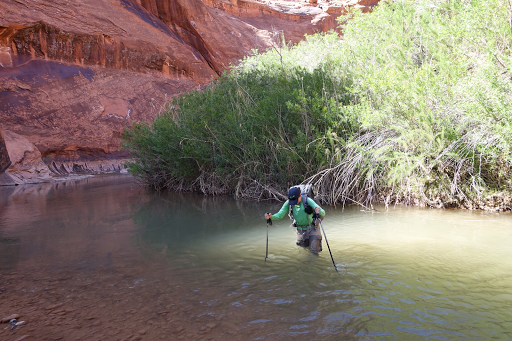 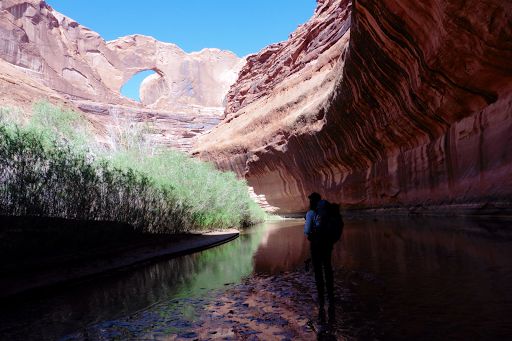 Finally, for the last few hours of the day, we entered the popular Coyote Gulch. Lots of other backpackers in here. It’s mostly about ankle to knee deep and very calm. Very scenic and you just walk upstream either wading in the sandy bottomed water or along shore mostly in deep sand. There were many mini waterfalls and some we were able to climb up on along the side to get over. 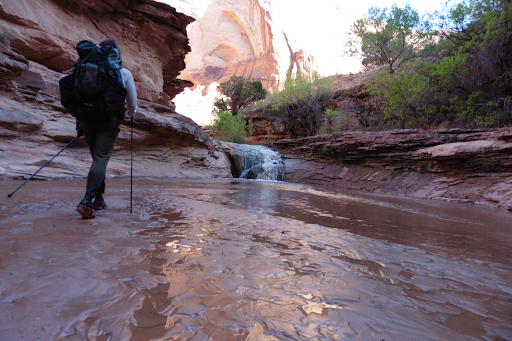 We had heard of one tricky spot where you are pretty much forced to traverse along a steeply angled slick rock face for about 20yds. It was NOT enjoyable as both the angled rock and out shoes had no traction with both covered in sand. None of us managed to get a photo with how stressful it was and I really didn’t like it. It would have been about a 30ft drop onto more slick rock if you slipped, so no death, definite injury possible. Once I get to Internet, I’m going to look it up online, cause I bet there’s been accidents there! The last couple yards, I felt myself slipping and stupidly tried to sit which just took all my traction away and then my pack felt like it was taking over. Gavin was able to reach his hiking pole out to me and I was able to grab it and lunge while he pulled me across in one swift move. Not enjoyable at all and I had been told it might be the crux spot of the trail, so I’m happy it’s over! Note: After writing this post, I was told (in comments below) that there is a way through the waterfall that is less stressful, whew!)
We went as far as we could up Coyote Gulch til 7pm, our latest night yet, and are now camped at the Coyote Gulch Natural Bridge which is really picturesque. 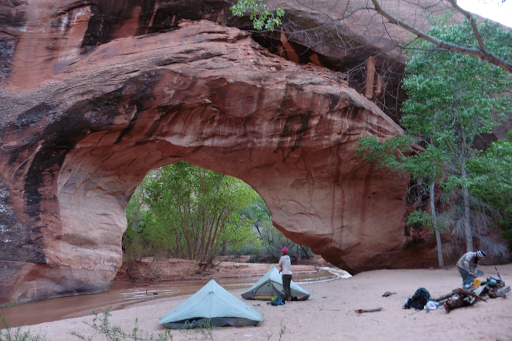 By map, we seem to have only done about 15mi and we hiked for about 10hrs of the day at a relaxed pace. Just slow miles today. The GPS had more like 20, but it was all over the place while we were winding in the canyons the second half of the day. We think we still have about four slower miles and then five quicker ones tomorrow to get us to the fairly remote Hole In The Rock Road. Hikers have waited up to 21hrs to get a hitch on this road, so some take an alternate road walk much of this section to walk directly into Escalante and avoid the hitch. We are going to go for it and have extra food if we have to wait, but timing is in our favor as we hope to get to the road around noon and catch the weekenders headed back to town on Sunday afternoon. We already met some as we hiked today and one couple in particular was willing to pull over if they see us on their way out from another trail head.  Let the adventure continue!
A bonus photo of this uniquely colored lizard that totally did a model pose for me! His body is about the size of my hand. Not many other wid animal sightings out here other than lizards. Not even a snake! One owl sighting. No wild buffalo on Mt Ellen either, darn. 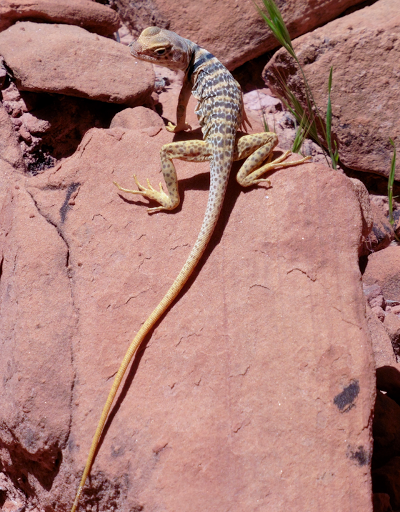