April 14th
Willow Tank Slide(322.9)-Rogers Canyon(340.2)
17.3mi(GPS says 18)
It was a pretty challenging day today for a variety of reasons. It’s pretty late and I’m wiped out, so this entry won’t be too detailed. We got going about 6:30am and had the 3mi climb still to do up and over Fifty Mile Bench. It was a decent climb and somewhat slow going with the steepness and the fact that we were each carrying 9-10 days of food for this leg. At 10:15am, we got water at a tanked spring that was warned to be our last guaranteed water for 30mi. Given the anticipated slow miles of the terrain coming up, that means no water possibly for 48hrs. We knew that if we could do 17-18mi today, we’d have a better chance of making it to water by dinner tomorrow night, so that was our goal…if possible today….Katherine took 9L (18lbs). She meant to take 8L and later realized she had taken 9L. I took 6.5L(13pbs). I am guessing my pack was at 45-50lbs and was surprised at how tolerable it was. Here’s my pack, the Gossamer Gear Mariposa, with 9 days of food and 6.5L of water. It isn’t intended to hold that much weight, but it did carry it well. 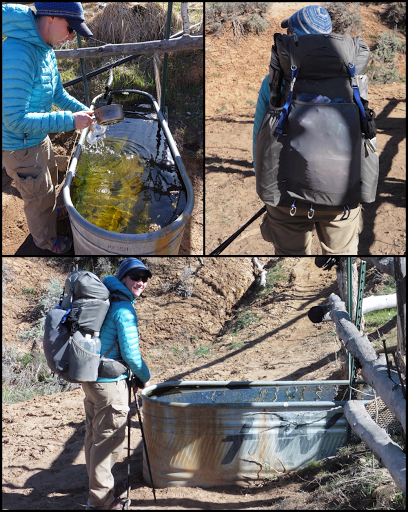 We had some time consuming hiking all day today, whew! There was cross country through sage brush to get to Monday Canyon. 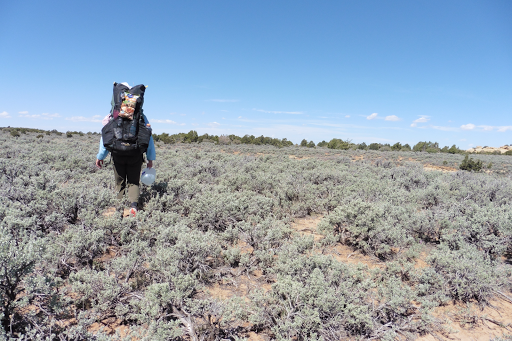 Much of Monday canyon was close to 1mph hiking. It was really slow going because there were boulders and obstacles constantly! I really can’t emphasize the challenge of this with the insanely heavy loads we were carrying. Somehow Katherine managed to get through most of it with a gallon jug of water in her hand and no poles. She has a bad back and is trying to avoid putting too much stress on it by carrying some(8lbs) of the water. It works for her and is impressive to see in hours of boulder scrambling.  The boulders took a lot of focus and concentration, so few photos were taken. 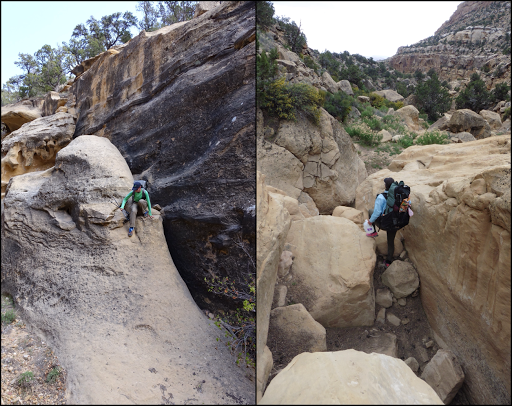 Along the way, we came across another couple doing the Hayduke, Wade and Busted Magic. We knew from registers and footprints that they were close. I knew Busted Magic a bit from PCT 2011 and we knew we were both doing the Hayduke this year. They started two weeks ahead of us and are doing a bit shorter days with preset caches to help shorten the long stretches. It was fun to catch up and we talked and overlapped a bit before Katherine and I continued on. There is a pair of guys that started about the same day as Wade and Busted Magic that are now ahead of us a couple days that we might see later this leg or next. 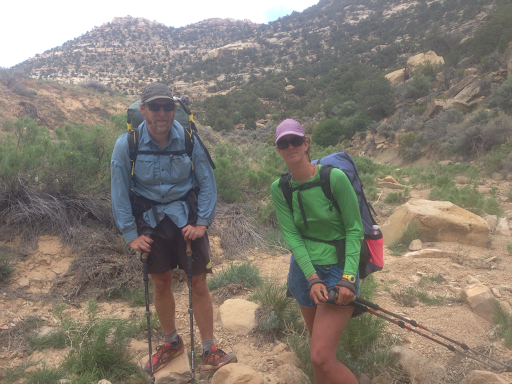 Man, did I mention how sllloowww going it was today!?!? We are pretty spent. I don’t usually take ibuprofen, but I think I will tonight. My ankles are not happy with me, but ok. Surprisingly, my shoulders are ok and it’s more the joints in everything below my waist that are complaining. My right wrist hurt lots today as I apparently rely on it greatly for support down climbing boulders and the weight was too much.
We really wanted to make our mileage goal and ended up a mile short, but are still positioned to land at water possibly for camp tomorrow night. It was quite gusty today and tomorrow (50mph gusts were forecasted, but we are fortunately low in a canyon) and tomorrow temps are predicted to plummet with 30% chance of snow tomorrow night. Then temps should rebound to something more tolerable.
We did see our first two snakes today. Katherine thinks it’s a garter snake and possibly a bull snake?? In both cases, I was leading and almost walked right into each one. Totally made me jump. 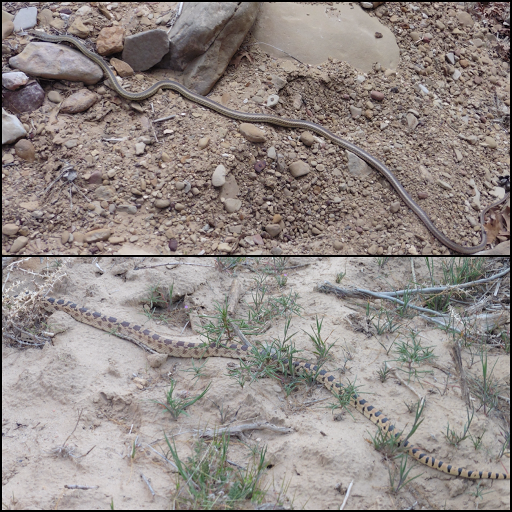 So the last hour of the day or so, we turned into Rogers Canyon and there has been a constant stream the whole way down! We even saw a ton of water sources even coming down Monday Canyon all day. Many of them were random seeps or potholes that can be random and vary greatly, but that made our big water carry unnecessary, but we had already carried the weight all day. The water was highly alkaline, so I just stuck with what I had. I had a rough end to the day. I was tired and my legs were in the jello stage when I stepped carelessly on sand that gave way and I fell into and on top of prickly tumbleweed. Lots of it got stuck in my hand, arm, pant leg, and butt. They aren’t difficult to remove, but definitely not a fun end to the day. 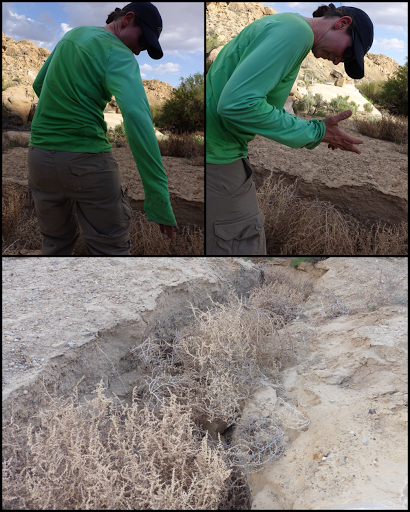 Then at camp, winds were gusting and some little obstacles made for a difficult tent setup. I had it up, but not right and had to start all over. I wanted it taut for the strong winds tonight and it took 45mins to do it good enough! Then we later realized after making dinner that the wind gusts are blowing a ton of dirt and sand into our tents through the mesh. There is cow crap all around us and I’m paranoid that I’ll ingest enough overnight to get giardia. Katherine says that shouldn’t be possible, but we both are not stoked with all the dirt and sand blowing in. Everything is covered and hers is really meshy and worse than mine. It’s one of the earlier ZPacks tents and also flaps a ton in the wind. It’s like a trash bag being flapped every time the wind blows and she’s going to try her earplugs. To make my tent even more frustrating, the zippers are officially shot. We were warned this would happen to everything with zippers and I’m surprised they made it 3wks when the tent was already used on the whole AT last summer. I have extra zippers and will replace them when I get to town. For now, it’s ok since there aren’t bugs to deal with and I can zip it up to have it partially hang. Plus, I can open my umbrella in the the vestibule to block cold wind and keep warm air in. I’ll have to get a photo of that later this week. 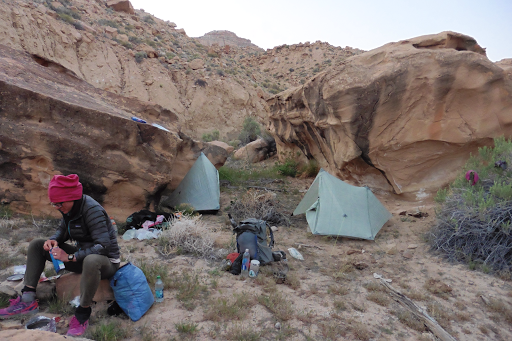 We are kinda kicking ourselves cause we passed on a seemingly great sheltered site and hiked another 45mins to find ourselves with very few options and we picked this spot at 7:10pm hoping this would work. Just one of those days on the Hayduke we knew would come and tomorrow looks to be possibly the same with lots in canyons, so we’re already ready for another tiring day, whew!